I just purchased my 2002 Montero Limited and it has extreme wear on the inside back tires. The P.O. says he had it aligned and then found out that these needed to be replaced and he never did it, but instead replaced the tires and then drove for a year without rotating tires and the back two are ruined. The driver's side is much worse than the passenger's side and is worn down through the rubber to threads. I'm going to put on the unused spare so I can drive it without worrying about those threads busting or getting punctured until I have this fixed. Have to get a jack that will work first as that was the only thing missing.

I'm not much of a mechanic and don't really have any place to do the work as I live up in the mountains and have a slanted dirt spot to park but plan on trying to replace these myself and then all of the rear bushings soon after. Has anyone changed these? I haven't been able to find a thread on them being changed or a video like I can for just about everything else.

Has anyone used the greaseable Moog replacements or would it be better to stick with OEM?

I have the same issue with extreme wear on the inside rear tires. I read in another thread that you really need to align these frequently.

In regards to your ball joints do they look busted? If the rear is the same as the front it is pretty easy (3 bolts to remove ball joints) I would always go OEM with ball joints. Look up the FSM for the Monteros here http://mitsubishilinks.com/

ChrisCosta416 said:
I have the same issue with extreme wear on the inside rear tires. I read in another thread that you really need to align these frequently.

In regards to your ball joints do they look busted? If the rear is the same as the front it is pretty easy (3 bolts to remove ball joints) I would always go OEM with ball joints. Look up the FSM for the Monteros here http://mitsubishilinks.com/
Click to expand...

Thanks, I haven't gotten to get a good look yet. It was dark when I got home with it Sunday night, left it parked yesterday when I came to work so I could get it registered and my temp tags and got home after dark. Been at work since soon after sunrise this morning... Plan on going and getting a jack for it today after work to get it up in the air and remove the tires and see. 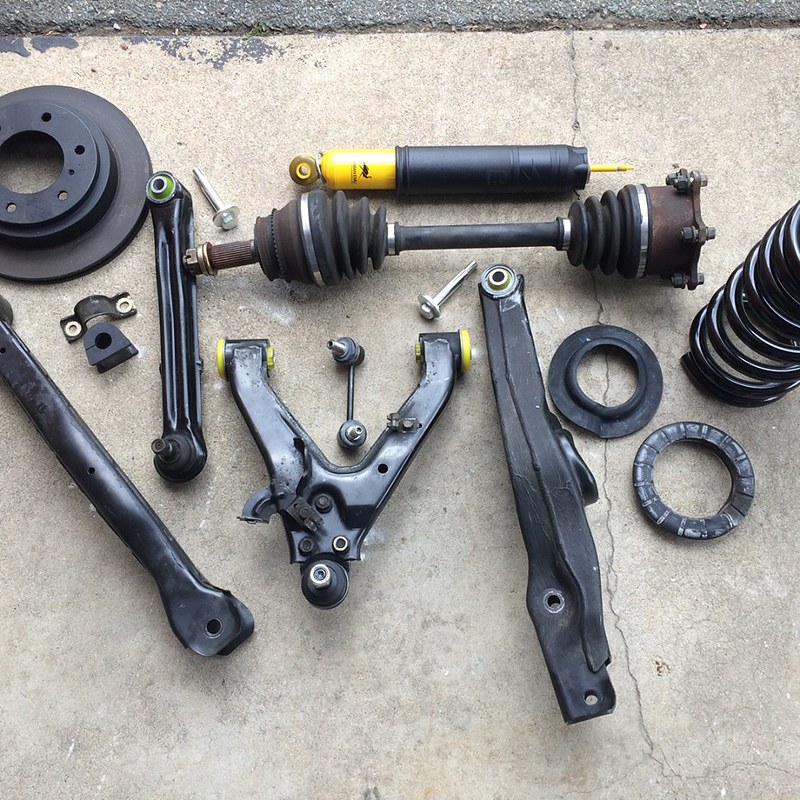 I recently changed all my rear bushings and UCA ball joints. The UCA ball joints are not too difficult. Three nuts hold it to the upper control arm. The ball joint is tapered so once you break it loose you can whack the knuckle with a hammer until the ball joint pops loose from the knuckle (see Sabre's excellent description here https://www.expeditionportal.com/forum/threads/replacing-front-wheel-bearings-on-gen-iii.147406/). One thing to consider is that in order to put a ratchet or impact gun on the ball joint nut you will have to remove the axle shaft (meaning you'll need a 36mm socket)...and to do that you'll have to disconnect the lower control arm (22mm socket) and maybe the rear trailing arm where it attaches to the knuckle (24mm socket). As you can see, though the ball joint itself is easy to replace, getting to it requires some work.

The only other ball joint back there is a pressed in ball joint on the toe control arm. I don't know where you'd find the replacement for that (I couldn't short of replacing the whole arm). Mine was in good shape so I reused it with no regrets. 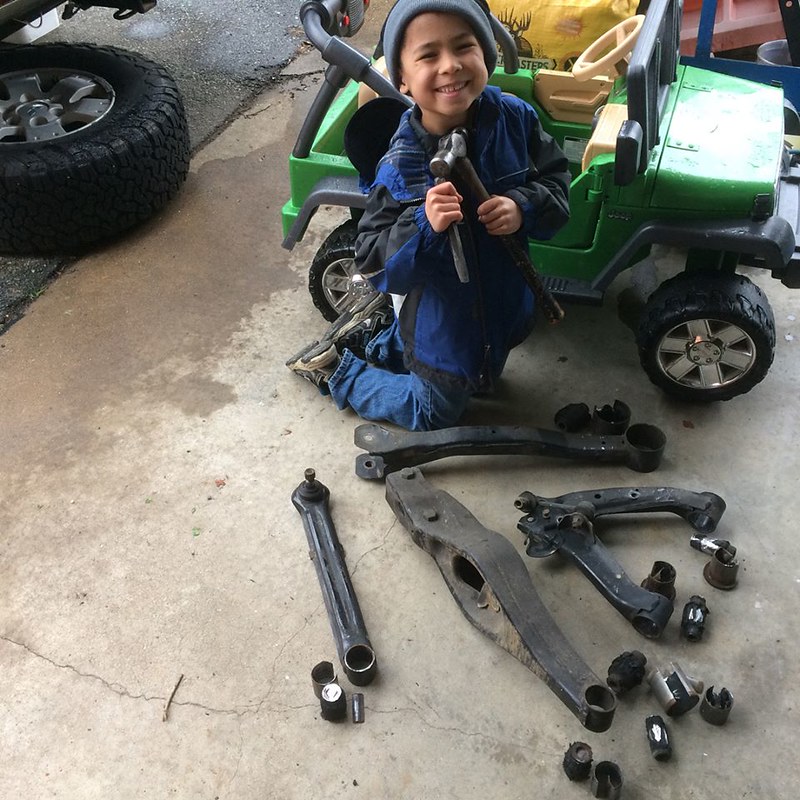 Now regarding the bushings...it's an arduous and time-consuming job, and if you don't have the space and some serious tools I'd reconsider trying to do it yourself. Removing them is a process of finding whatever method you're most comfortable with, whether that's burning them out, cutting them out, dissolving them in acid (jk), whatever...just know it takes a lot of time since there are 7 bushings on each side in the rear. I drilled out the rubber innards, then used a sawzall to cut out the metal sleeves. Regarding installing, you need to own or have access to a shop press (the all-thread and washer trick doesn't work). To press in the two bushing on the knuckle itself you'll need a heavy duty ball joint press (rent from an auto parts store easy enough) and an impact gun...good luck to the guy that tries to use a hand ratchet. Then know that you'll need to have an assortment of odd metal things to use with your press to compensate for the odd angles and tight places you'll be pressing into...old pipes, steel weights, 1/4" steel u-joint plates, whatever. 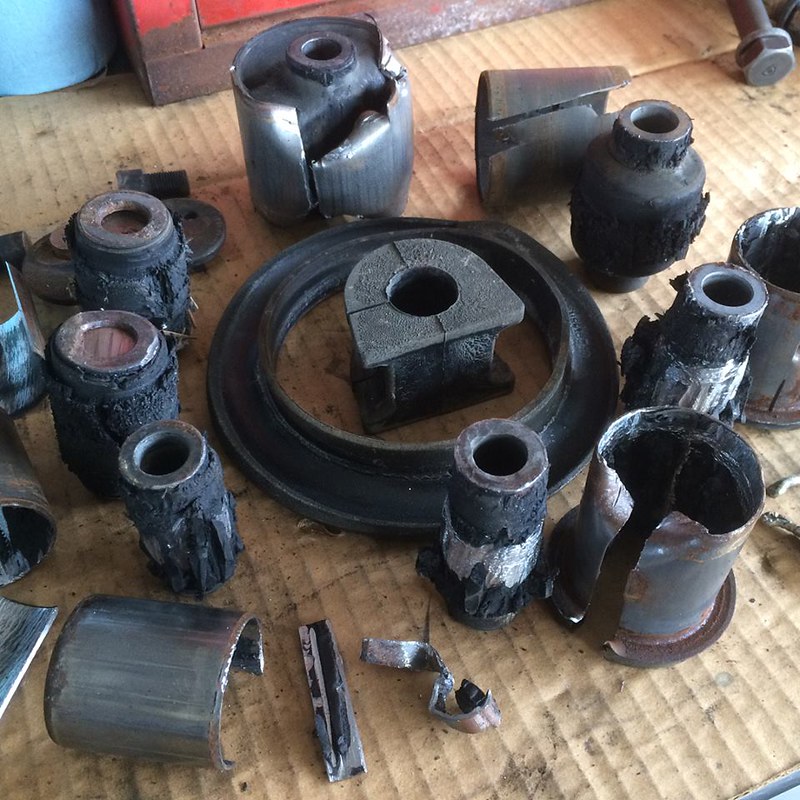 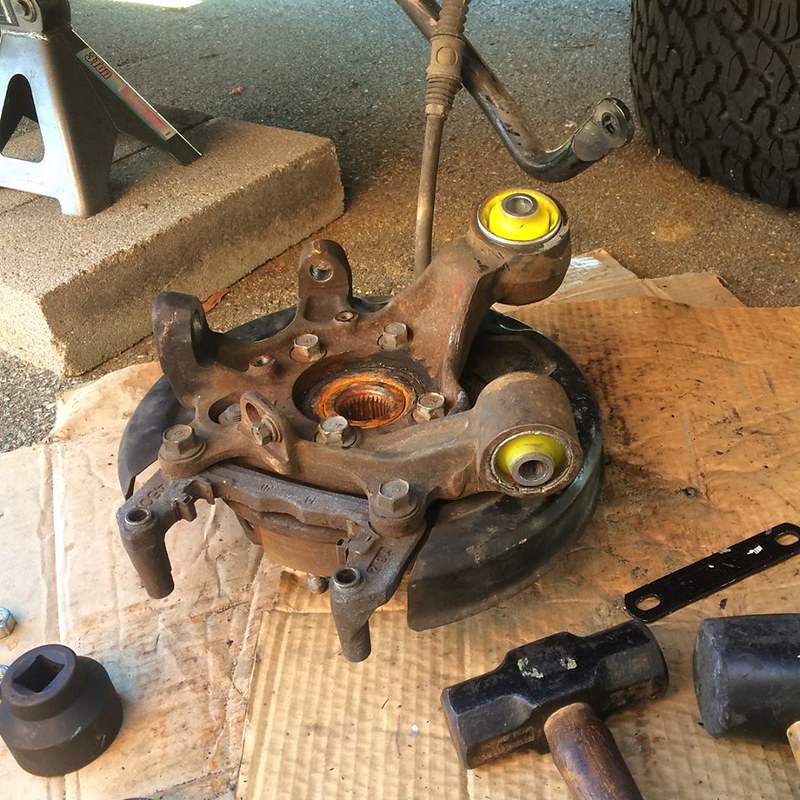 How bad is your rear camber? Do your rear tires lean into your wheel wells pretty hard up top? A lot of alignment shops won't adjust the rear camber after trying to turn the adjustment bolts and finding them seized (common problem on the Gen3). I'd assume that yours are seized as well, and include their replacement in your considerations. I had to cut mine out, destroying the old bushing in the process. This wasn't an issue for me since I was planning to replace the bushing anyways. And the same can be said for the toe adjustment bolts.