SRN said:
If its a 3.2L SOHC then the valve tick is common, as I'm sure you know. Its due to varnish building up on the top of the lifters. How I always used to take care of it was by running an oil with diesel detergent in it (like Rotela T6). Tick would away within a few miles after the oil change. When the tick would come back, generally six months would have gone by and it was time for another oil change.

You can also run Seafoam in the oil maybe every other change, that helps clean up the lifters too.
Click to expand...

yeah I've noticed if I'm not right on top of oil changes at 3k miles then the tick gets really bad. First time I was convinced the motor was toast, but a few hundred miles after that oil change and it was running quieter than ever. seems like every change it gets better and better.

Update of sorts. Took the Trooper out on its first real trip since the rebuild two weeks ago to the Swell. We ran Eagle Canyon, Eva Conover, North and South Coal Wash and Devils Racetrack. Everything was running like a champ until I bounced a bit on a ledge on Devils Racetrack. After that, unless I was in 4-Low it'd just sputter until I raced the engine up over 3500 rpm and dump the clutch.

Some basic diagnosis at camp had me thinking it was a bad fuel pump. Trailered it home, did some more tests for fuel pressure and it sure looks to be a pump. So now I'm soaking those tank bolts in anticipation of dropping that! Goodie. And right in the middle of buying a new house and moving; great timing...

Replaced the fuel pump yesterday and its running like a champ again!

Once I get into my new house, I'll be starting to work on upgrades again soon!

Glad I found this thread! Just bought an 02 trooper a few weeks ago after losing the engine in my 80 series in February. I had an 87 trooper once, and now a second gen. The 02 is quite a different animal compared to the 87. I also have the 5 speed manual as that`s the only way to own a trooper. Looking forward to your future posts and thanks for sharing your adventure with us!
H

I have a 2002 trooper that uses a qt every 800 miles.. I really like the platform and hate to sell but its going. Im a bit late to chime in on the fuel pump post strato made but years ago on my sons trooper I just cut a hole under the rear carpet over the fuel pump and easily replaced the pump. I welded 4 tabs to the cut piece and used self tapping screws to hold in in place and ran some quad urathane around it. Ill never drop a tank again especially with a hitch in the way. Let us know how it comeing along..

The update is "Life". In addition to all the health problems I had last year, I also bought a house, which has taken a fair amount of time to get settled in. Got married on NYE, so all the stuff associated with planning a wedding took a ton of time. 2019 Was a hell of a year!
Now that's done, so I'm back to thinking about the Trooper. I've made some tweeks to the next phases and will hopefully get going on them here shortly.


berg said:
I have a 2002 trooper that uses a qt every 800 miles.. I really like the platform and hate to sell but its going. Im a bit late to chime in on the fuel pump post strato made but years ago on my sons trooper I just cut a hole under the rear carpet over the fuel pump and easily replaced the pump. I welded 4 tabs to the cut piece and used self tapping screws to hold in in place and ran some quad urathane around it. Ill never drop a tank again especially with a hitch in the way. Let us know how it comeing along..
Click to expand...

Yeah, the 3.5L is notorious for burning oil. There are many people who have rebuilt the heads and resolved the issue, so if you decide to keep it; there is hope!
I thought about cutting a hole in the floor board, but decided it was a better idea to drop the tank and clean everything up. It turned out to be not so bad; but if the bolts hadn't come out fairly easily I probably would have done what you did.
H

SRN said:
The update is "Life".
Click to expand...

When life gets hectic, I find it important to remind myself that toys can be placed on the shelf and returned to when the crazy levels drop to a manageable level.

Jupiters Travels: Four Years Around the World on a Triumph
by Ted Simon
From $17.49From CAD$26.88

As I'm sure many of you have been waiting with baited breath for an update on my Trooper, you don't need to wait any longer! Since the last major update, I've recovered from a major injury/illness, bought a house, and got married. So the Trooper has understandably taken a bit of a back seat. That said, it hasn't just been sitting collecting dust. No, it’s been out on about a dozen trips of varying lengths since last summer and has performed admirably. Which brings us to today’s update.

On a couple of my recent trips I’ve come close to my fuel limit between the 22 gallons in the tank and the five gallon’s out back in the Scepter can holder a friend built for me years ago. A double Scepter can holder was always in the plans of upgrades I wanted in this project. Back before the world ended, a friend and I bought six Scepter cans off a guy. Included in that purchase were two holders that were, shall we say, extremely over built. Each one weighed in at over 20 pounds, for comparison the single holder that I already had weighs only 9 pounds! After having them sitting in my garage for a few months, I finally thought I’d do something with them. Now, I am no fabricator; I’m just a guy with an angle grinder, reciprocating saw, a 110v Craftsman Mig welder, and a free Sunday!

I wish I had thought to take a before picture, but basically each holder had a ton of unneeded metal on the sides. And this isn’t light stuff, its 1/8th inch steel. By cutting them down to an “L” I shaved 10 pounds out of each holder! After hacking them up, I flipped the ol’ buzz box on and did a really ugly job of welding them together (that’s what flap wheels and paint’s for, right?). Once they were solid, I pulled the old holder off the back of the Trooper and started the process of mounting the new one. 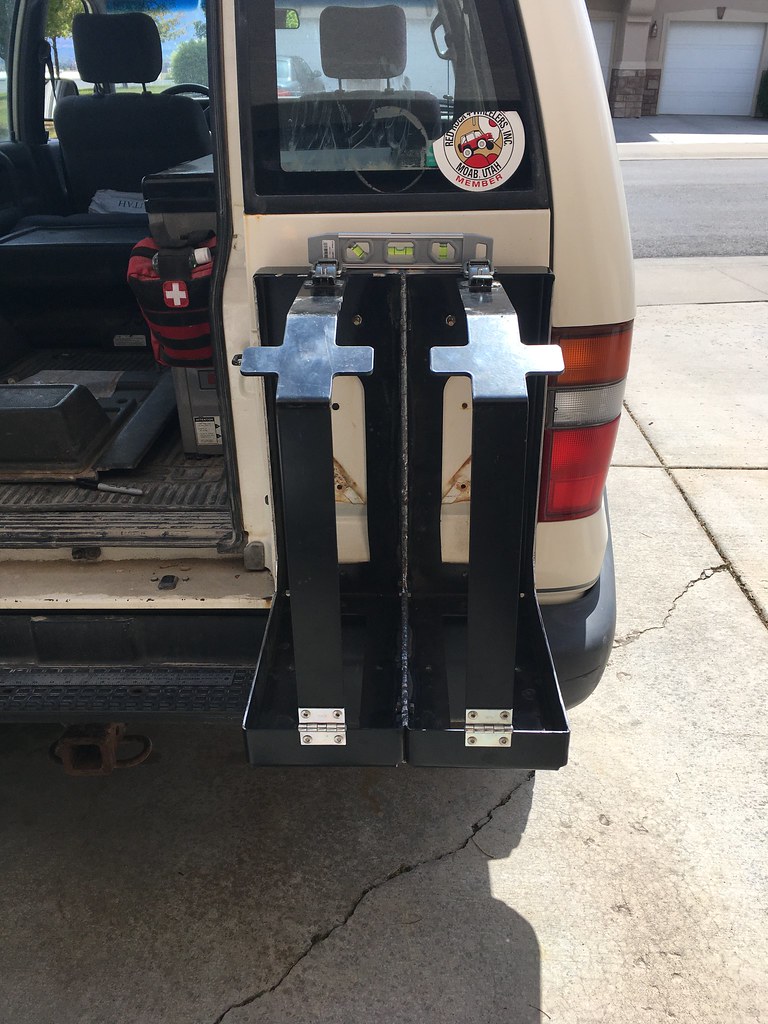 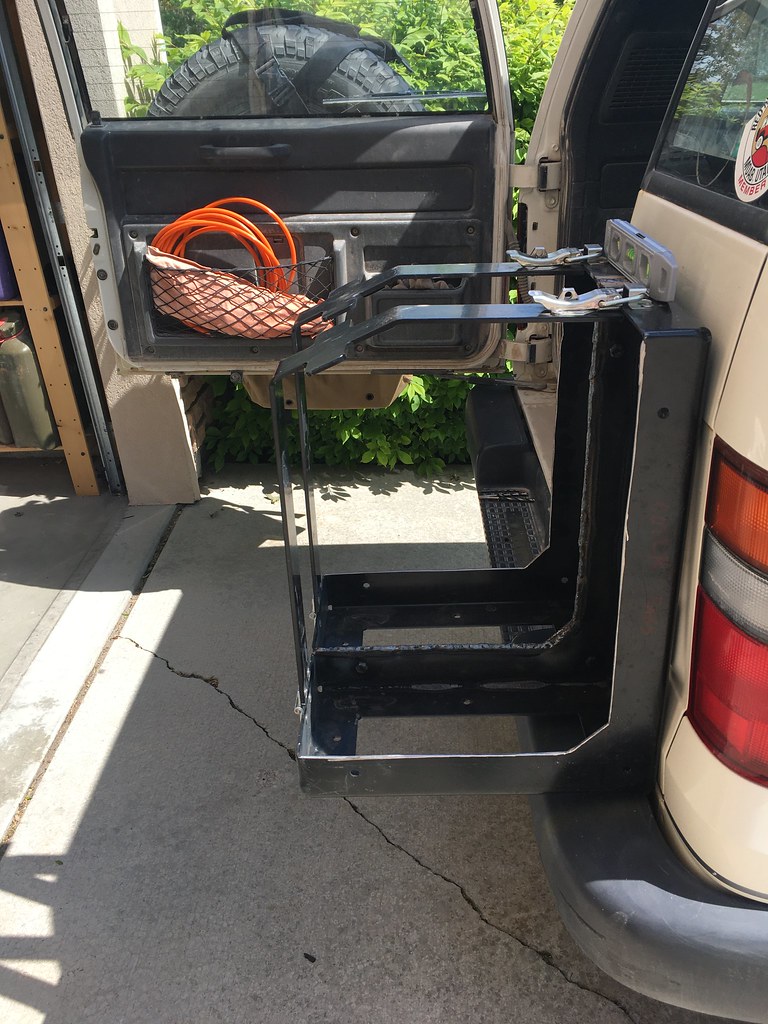 Since this setup is significantly taller than my old one, I had to drill holes into the top and bottom of door in addition to the old license plate holder holes I’d been using before. All told, I used ten mount points, connecting all of them with steel bars on the inside of the door for rigidity.
Once I’d drilled all the holes it was time to clean up the door panel, plug all the old excess holes, and paint it with some bed liner. 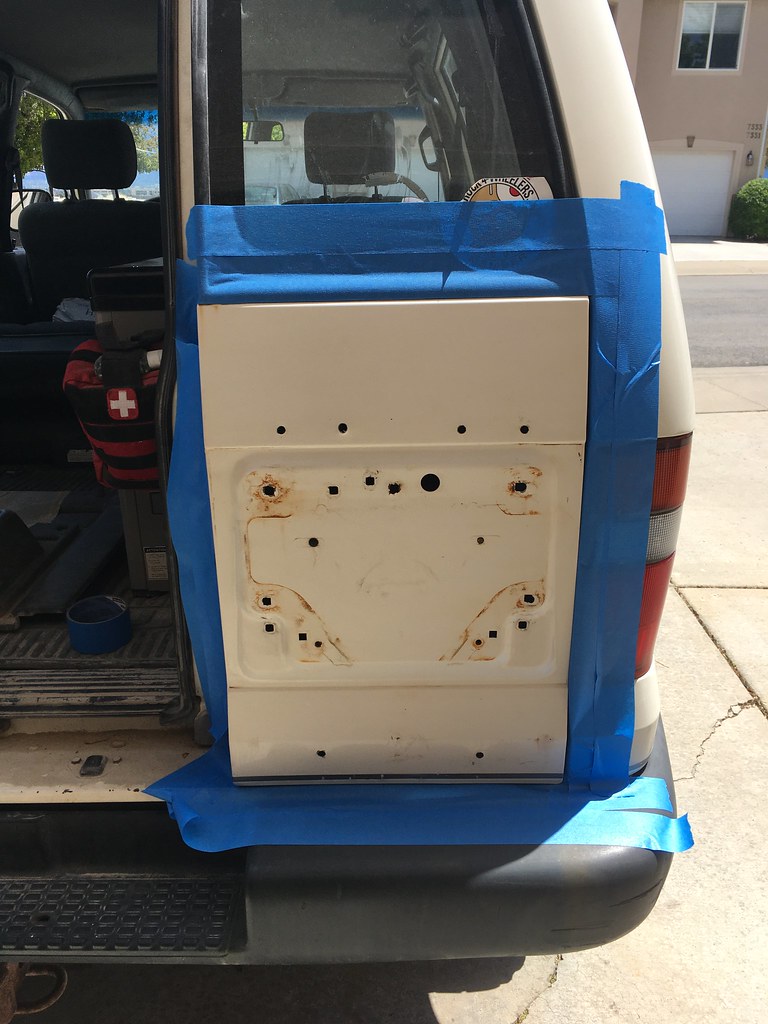 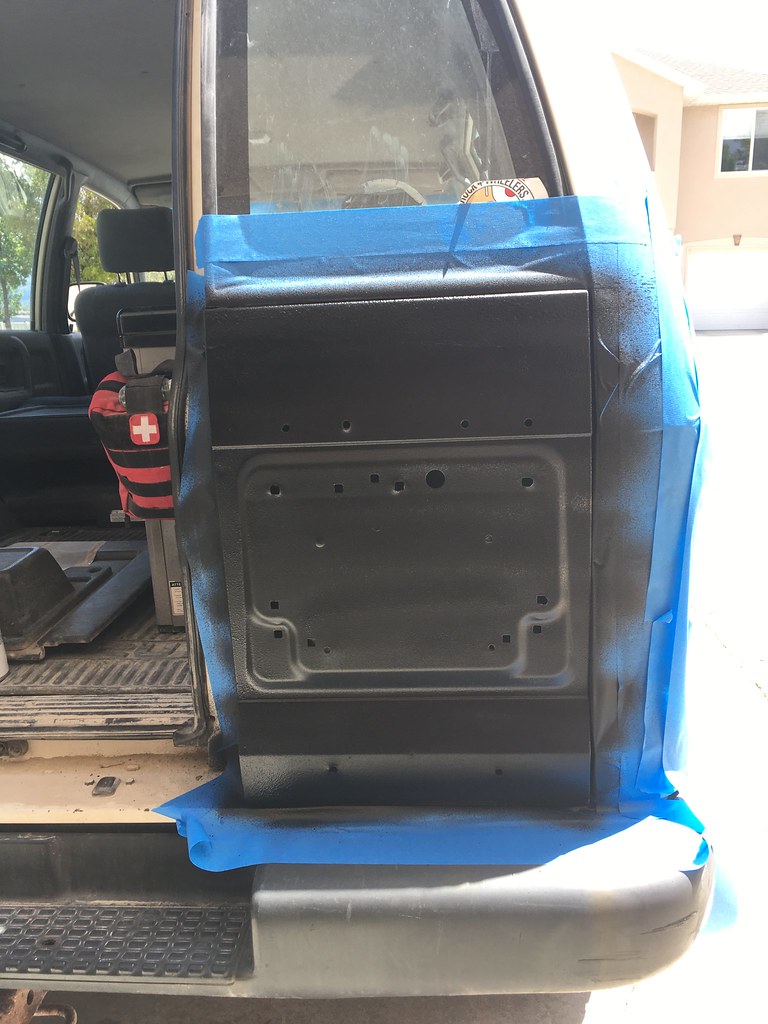 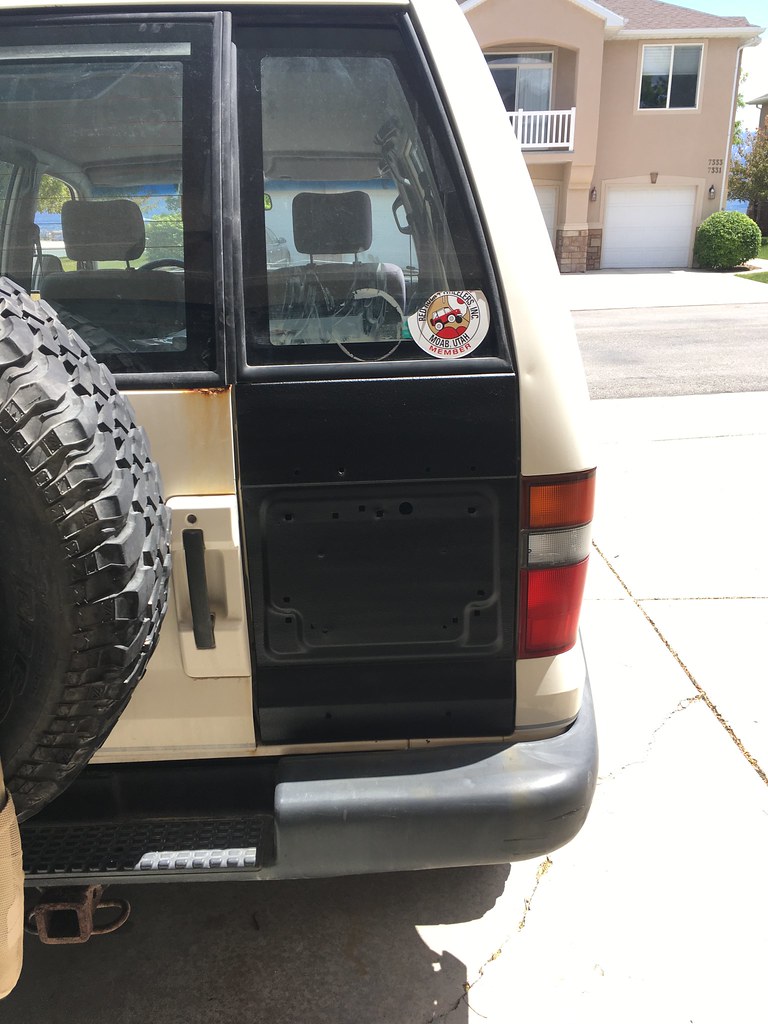 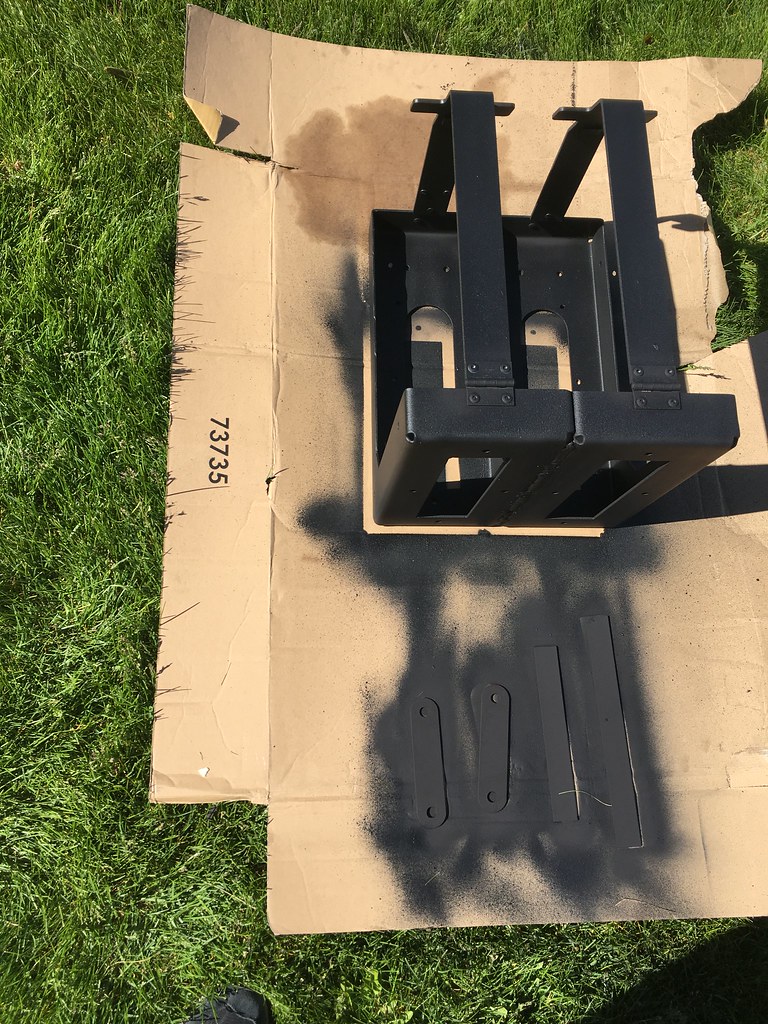 After everything had dried, I mounted it and loaded it up with two full cans. My biggest worry was if the door could handle the weight. But I’ve seen other Troopers out there with similar setups and honestly, that door is pretty stout. So far, everything seems sturdy and solid! 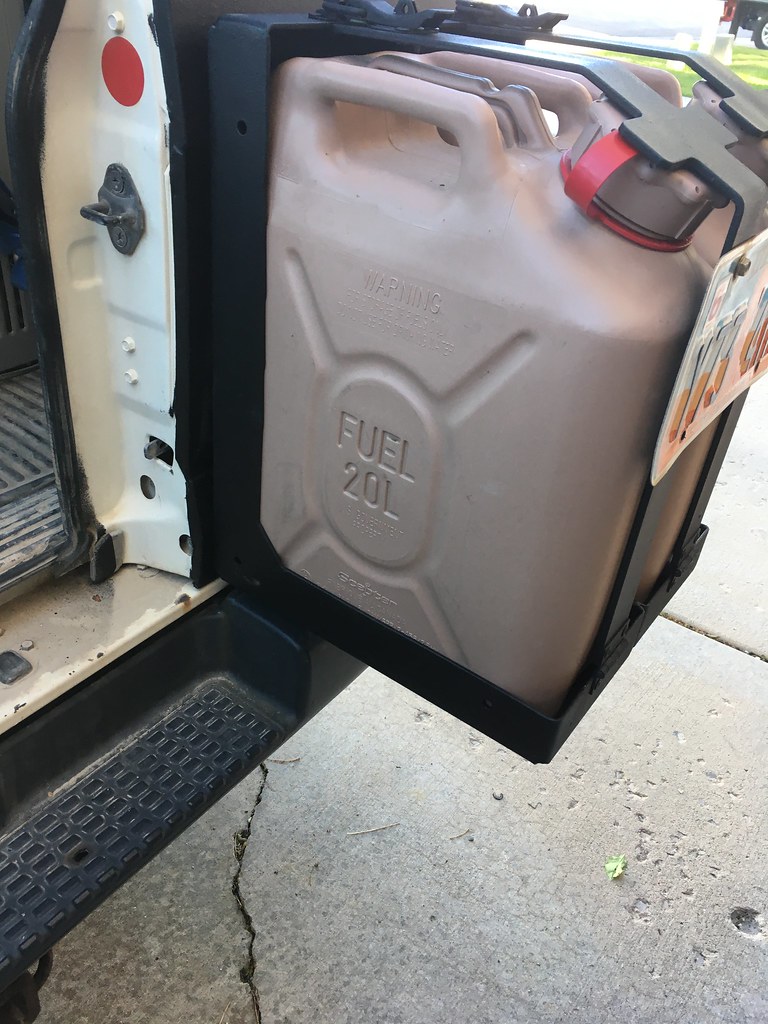 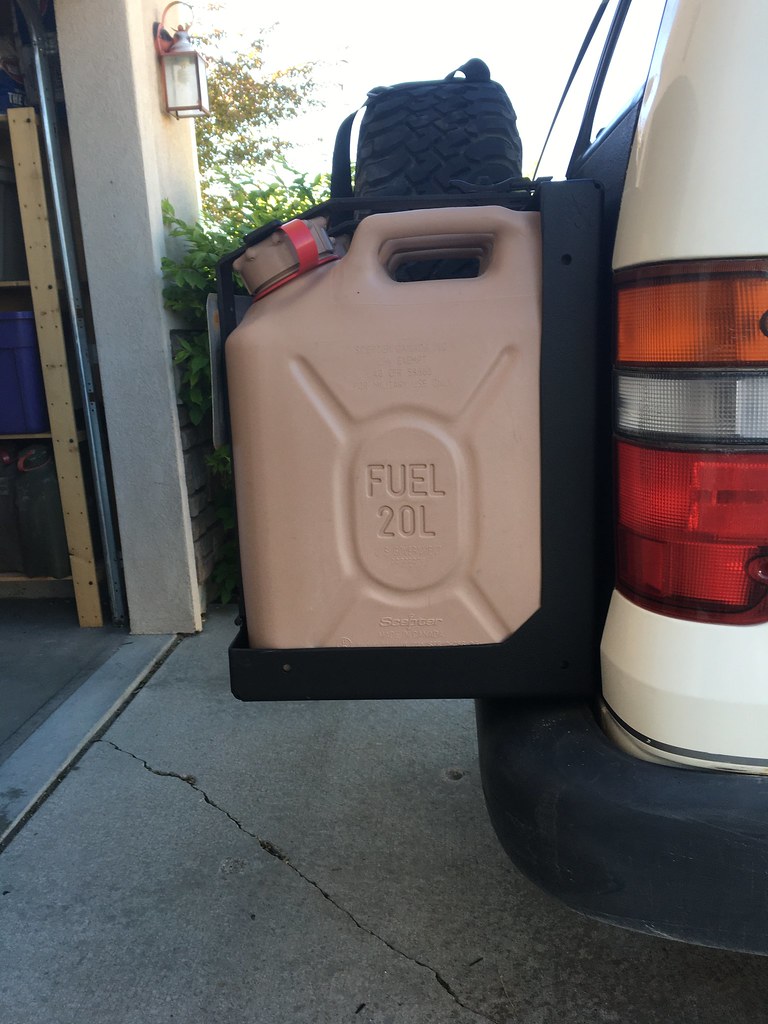 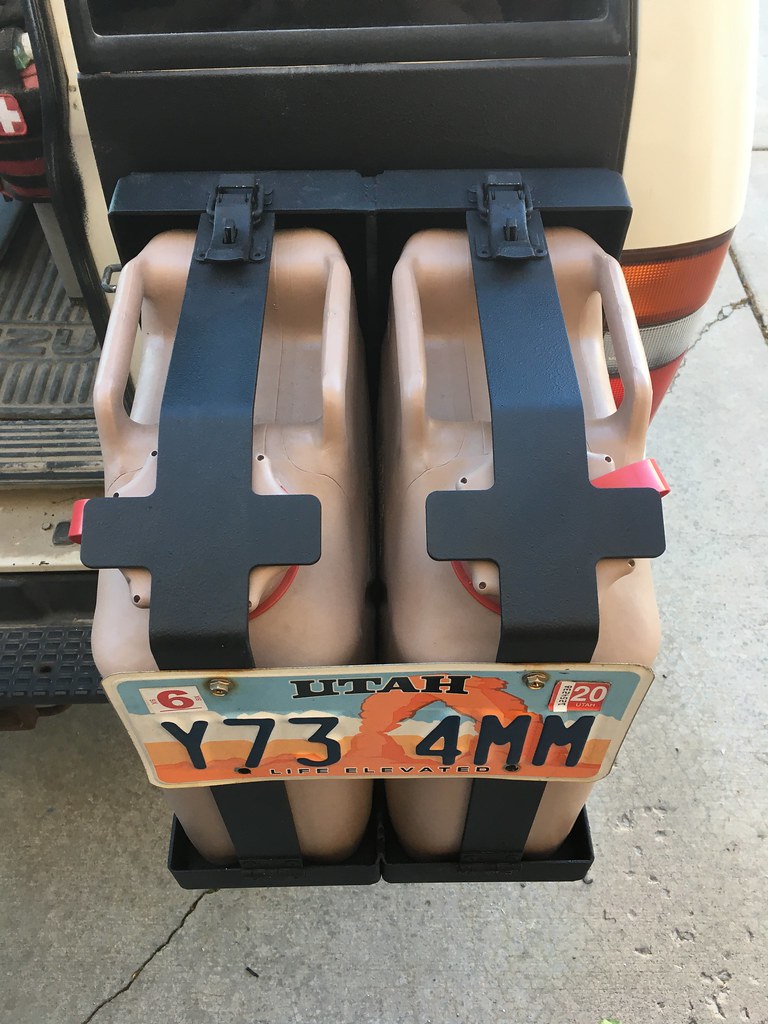 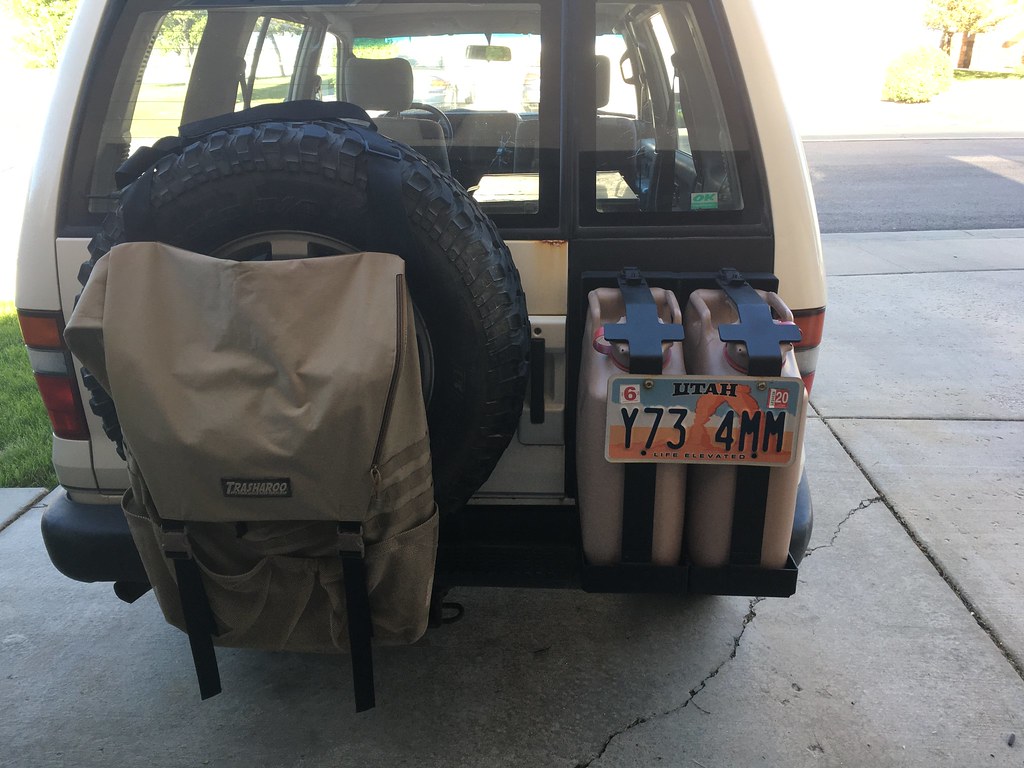 Aside from where the plate is mounted, I'm happy with how the "recycling" project turned out. I thought about mounting the plate down low, but I really didn't like how that looked. And if I have to open both sides, meh, no big deal.
Last edited: May 26, 2020