I'm guessing your comment refers to my build. Without appliances, it comes in at 977.47.

With the drawers ready it was time to complete the build and get the insert installed. The installation went perfectly with the frame mounted to the Tahoe’s sheet metal floor with the same type of hardware I used to mount the Rhino Rack. Once installed and squared up, I mounted all the drawers and the fridge/freezer.

I’m not too happy with the stain color on the stove/sink slide-out, but I’ll live with it for now. The insert height was designed to come close to the bottom of the rear-window access.

I topped off the insert with 3/8″ plywood covered with the grey indoor/outdoor carpet. The top was measured and fit to keep the EA rails exposed so I can add tie-downs in the event I need to secure anything on top of the insert.

I made a door for the rear compartment from 1/2″ plywood and installed it with a slam latch and stainless marine hinges. This rounds out the dog deck.

Inside are storage shelves and the water pump.

The electrical panel on the driver’s side will distribute switchable power to the pump, fridge and worklights. I’m waiting on a 9-gallon fresh water tank that will install beneath the dog deck. I was going to go with a larger tank fitted in the space where the spare was stowed between the frame rails underneath, but I couldn’t find a tank that would work in the wonky space.

It has some needed finishing touches that I’ll take care of while I wait on the water tank, along with the 5lb LP tank that will feed the stove, mounted on the swingarm.

Gas, power and water. All three were fairly straight forward to come by making the back of the White Rhino a sustainer on and off the road.
Key to this was the design of the stove/sink pullout, creating a stable platform that had enough space beneath to wrangle plumbing and gas.

The idea was to be able to quickly deploy the unit without getting on hands knees beneath the unit, as well as have the drawer still be able to slide without obstruction. Pressurized water arrives at the drawer on the rear wall via a swivel I made with two couplers that rotate freely, allowing the feed hose to adapt to its rest position when deployed and stowed. I’ve since deleted the drain hose since it would hang down and obstruct stowing the drawer. It now rides in the sink and is easily attached when the unit is used.

Gas comes off the 5lb tank stowed on the swingarm. It’s easily connected with the LP quick-connect fitting.

Water is pumped from a nine-gallon tank located beneath the dog deck. I’ve installed a fresh water fill inlet on the deck at the rear passenger door that vents the tank. The tank has since been wedged into place creating a well at the far end which is reached by an inner draw tube that reaches to the back of the tank.

Water pressure is created with a Seaflo self-priming automatic pump that delivers three gallons per minute.

Powering everything is a 12v system that comes off the White Rhino’s PPV option house system protected by a 100a breaker. Power arrives at a Blue Sea six-circuit fuse panel and is distributed to a switch panel or fed directly to the rear work lights via a switch in the galley.

The water pump is switched and the fridge is powered from the 12v plug.

I sourced three 5 watt recessed 12v downlights to create an even illumination source for the galley. They’re installed in the lift gate panel.

I made three 2 3/4″ holes in the panel and wired each lamp in series. While I’m not impressed with the quality of the fixtures, the light they produce is amazing.

Things I’ve learned on the road:
The water inlet turns into a water feature on every left-hand turn. I’ve since installed a valve to close the vent while in transit.
Don’t turn the water pump on until the sink/stove drawer is deployed. With the glass lid down is partially opens the faucet.
Wrapping the fridge does, in fact, increase its efficiency.
I did this entire build during the first four rounds of chemotherapy to treat Mantle Cell Lymphoma, and the White Rhino was created to knock off items on my bucket list as we mobilize to make the best of the time I have left.
If I can do this, you can do anything.
Last edited: Jun 6, 2021
C

MattL said:
100 Series build I did for a friend. He had the carpet platform prior, just wanted something to work with it for his fridge and storage.

very nice. Saving this for ideas on mine!

Even if you don't run a DECKED system we wanted to share a new product that might help organize your custom drawers a bit more. 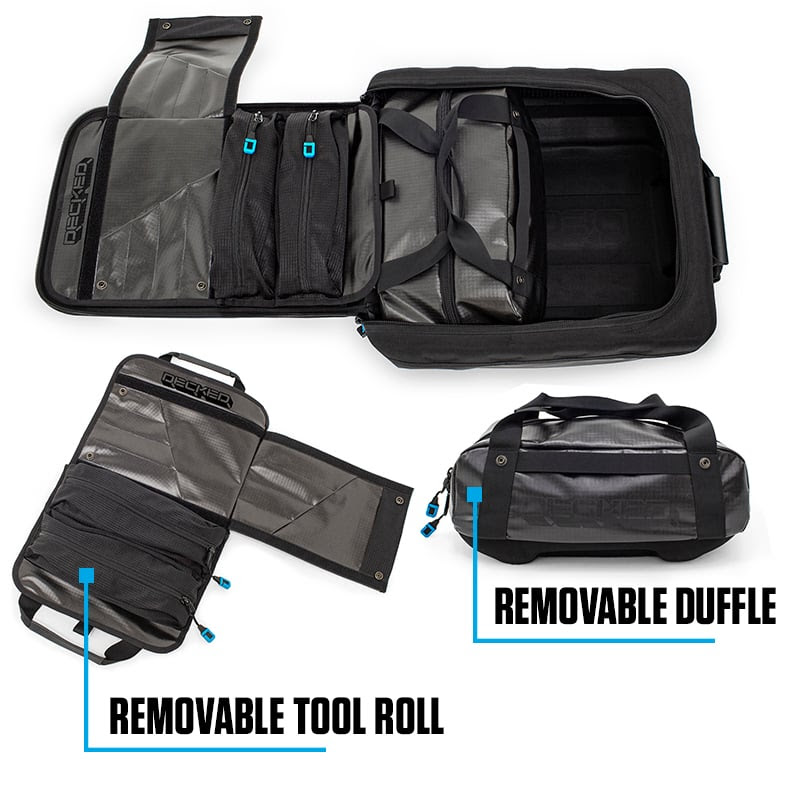 When will the decked drawer system be available for SUV’s?

Here's mine. I designed it in Sketchup, then imported it into VCarve Pro and cut out the parts from 3/4" plywood on the CNC router at work. Then assembled and finished it. The drawer slides are 100 lbs a pair and the drawers don't fill the entire depth of the unit. There is a roughly 6" deep, full width storage cubby accessible by tipping the back seats forward which is good for longer stuff. Also there is storage down the sides accessible by lifting the side pieces which are held on to L brackets with velcro. The whole thing is tied down using 4 turnbuckles to the tie down points. To sleep in it, I have an extension piece which I put in before a trip which when unfolded makes a 6' x 4' sleeping platform. The drawers never have to be removed whether I am using the vehicle as a regular 5 seater or as a camper.

Some amazing stuff in here. Here is what I did, for me this was a major accomplishment.