On our Rig, we went back and forth between 20# swappable, 10# refillable, 5# refillable, etc. Finally after many uses and mishaps of forgetting to swap out tanks or grabbing the wrong one, We decided that On Board Propane in a permanent location was best for us.

Going with a horizontal tank vs the verticals.

Here is ours and I will post links in the following posts.

We normally nest our Stove, and Griddle in-between the refrigerator and truck bed. 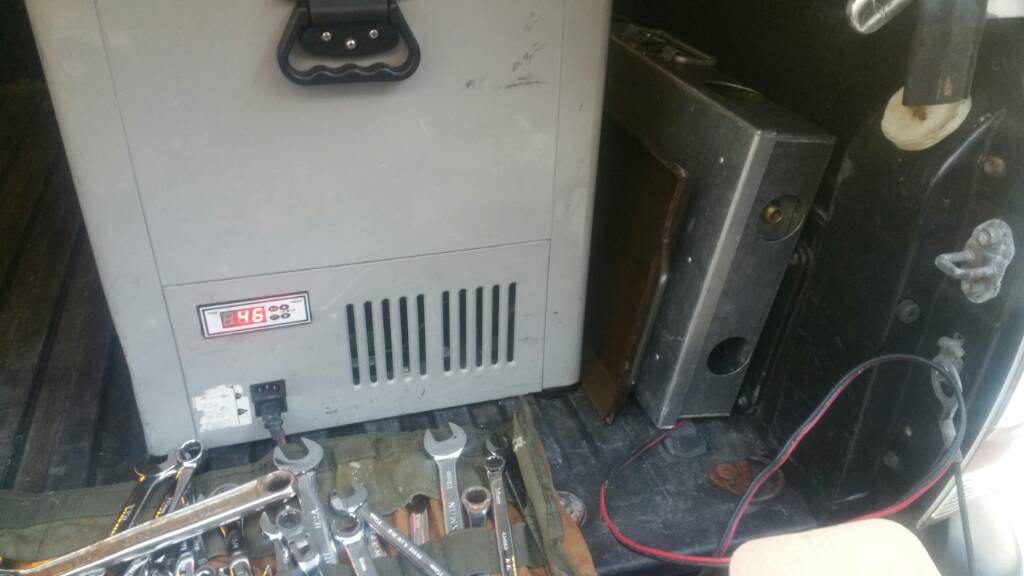 Was thinking of using this cubby for the Disconnect

It would fit nicely if I drill a hole and use a washer to secure it. Putting it here would guarantee that we remove the propane fitting first. This Disconnect is nice. Has a Shutoff valve that also acts as a safety. Cannot remove the fitting without first turning the propane shutoff on the disconnect. 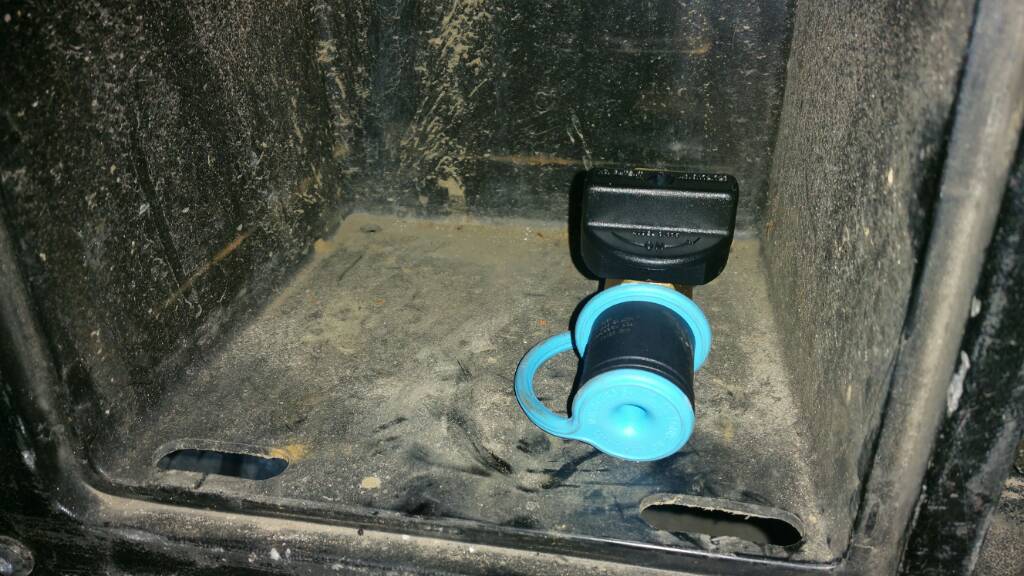 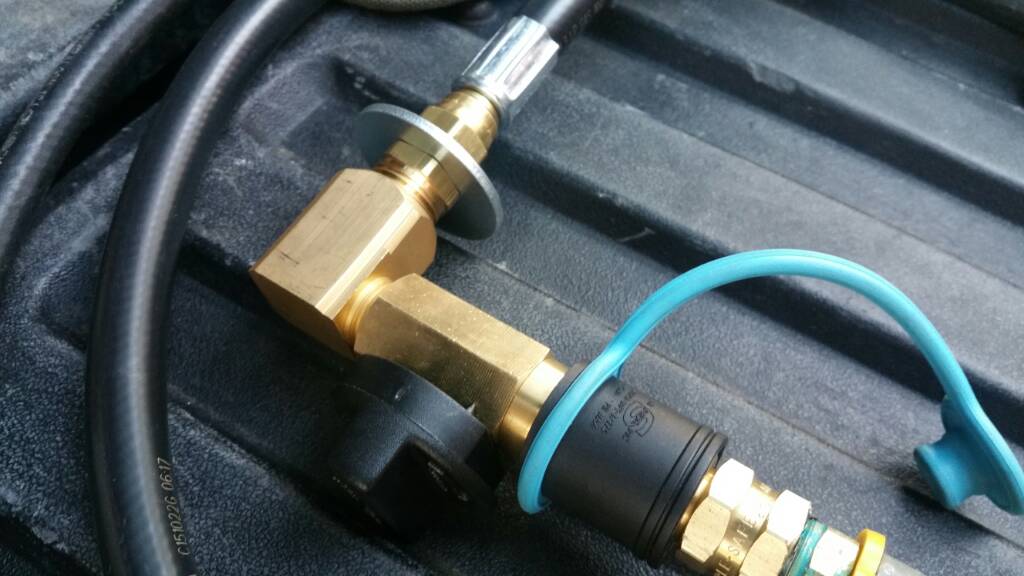 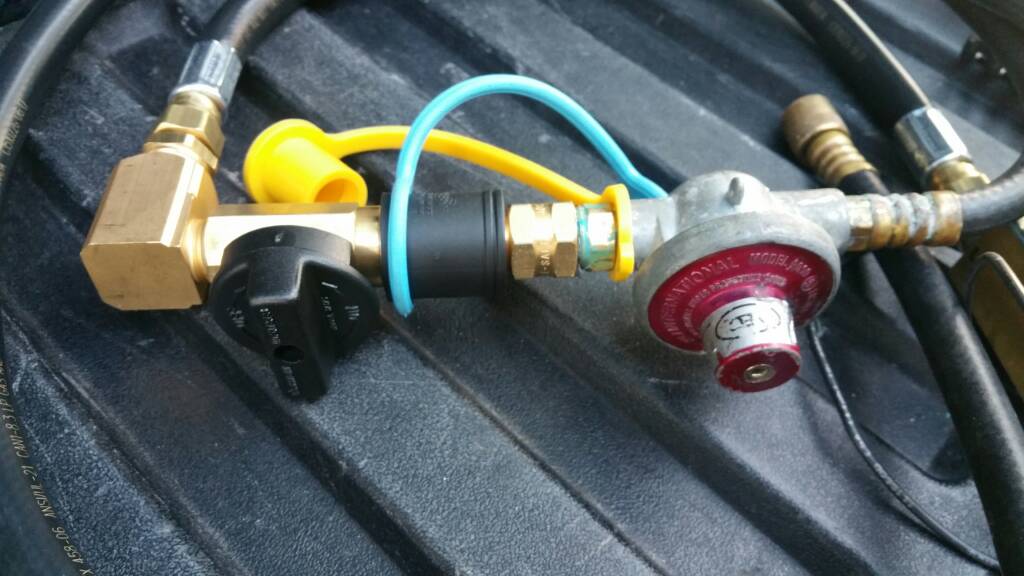 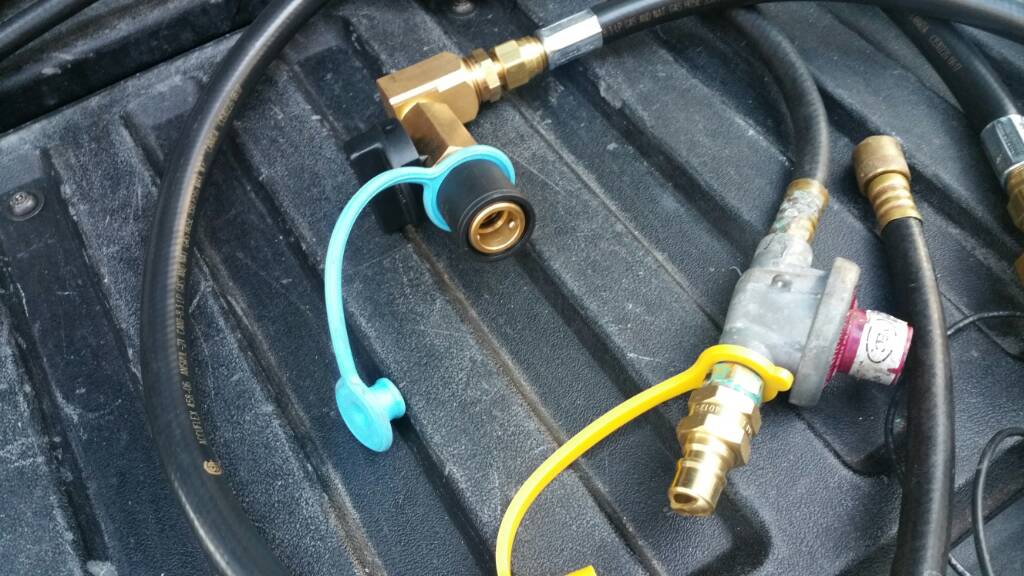 Here you can se the solenoid for the shutoff. So 2 safety devices for us. One on the Disconnect, and this one on the main where the tank connects to the POL. 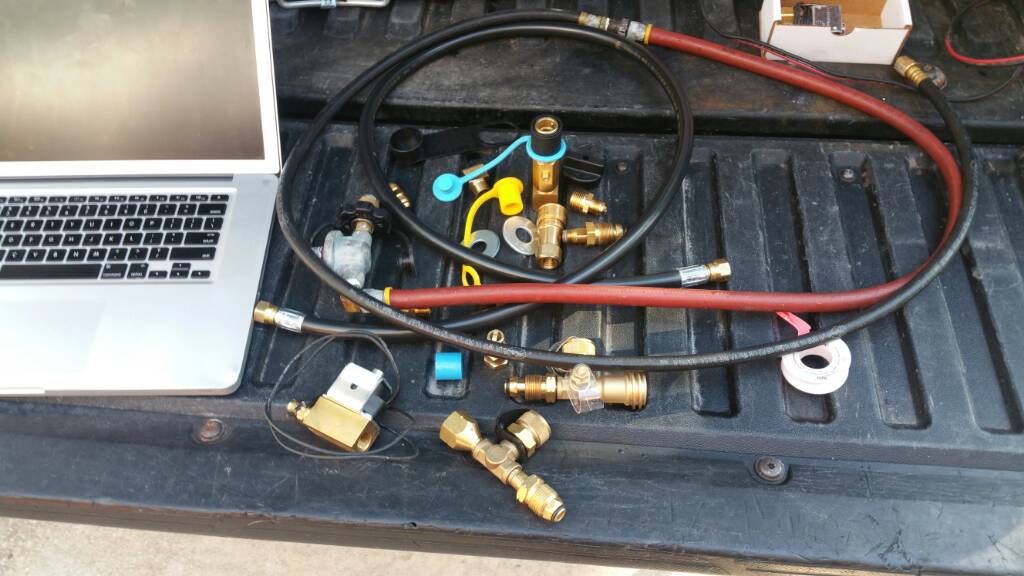 A huge Thank You to the guys at Tempaco For taking care of us and working out some concerns.
Click to expand...

skygear said:
After the hole was drilled, mounted it in a position that works when reaching in there. Top and bottom. 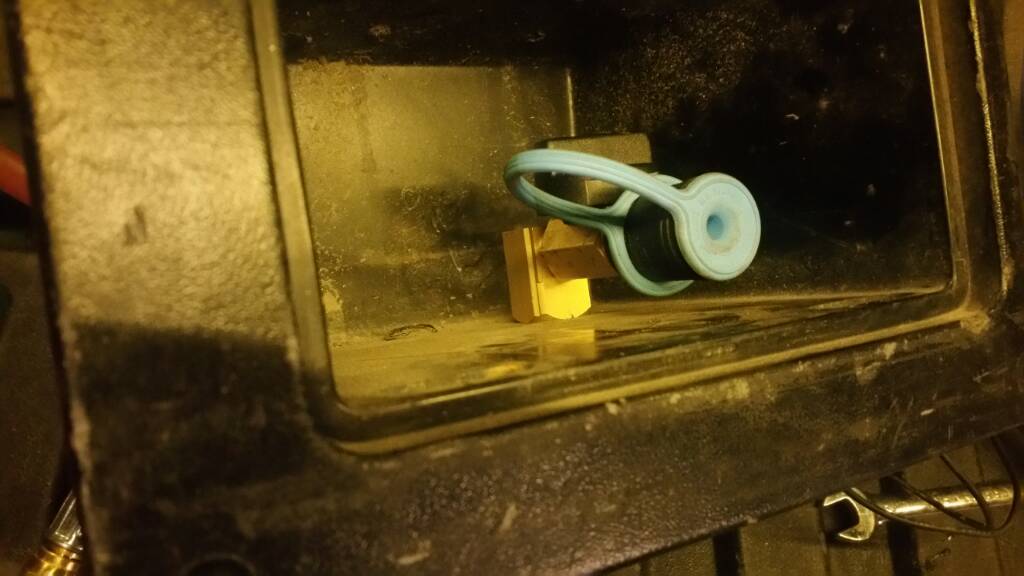 From wheel well back. Compressor in the background on the bulkhead and the box that was drilled containing the propane fitting. 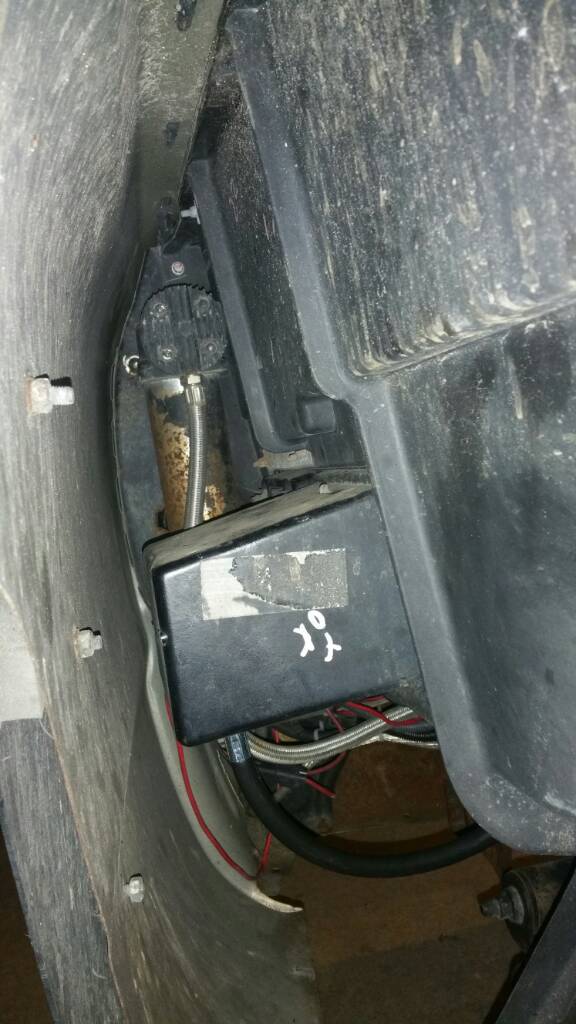 Air tank on left and Propane on right. 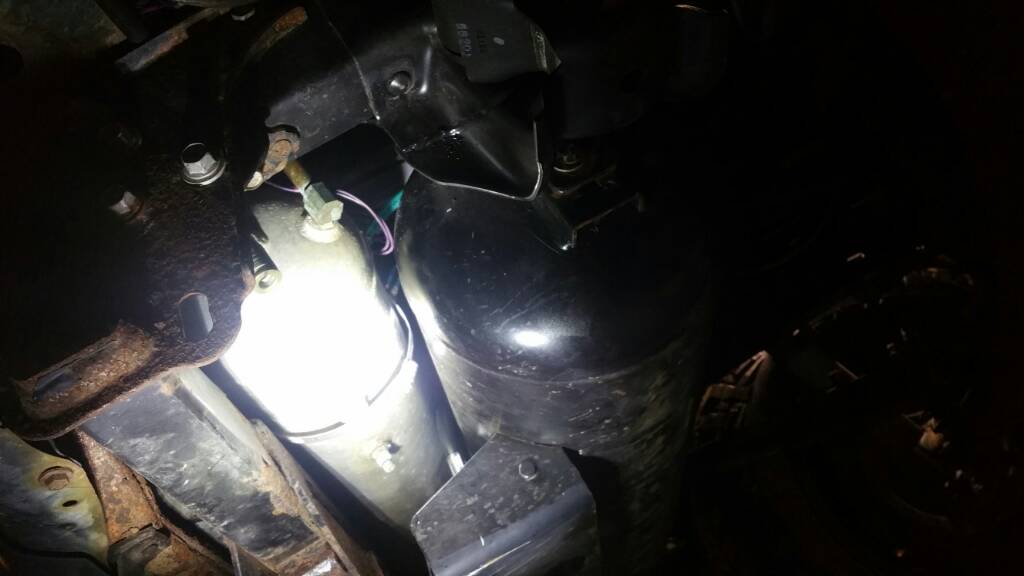 Decided to put a 90º to route the hose vertically coming off the solenoid. 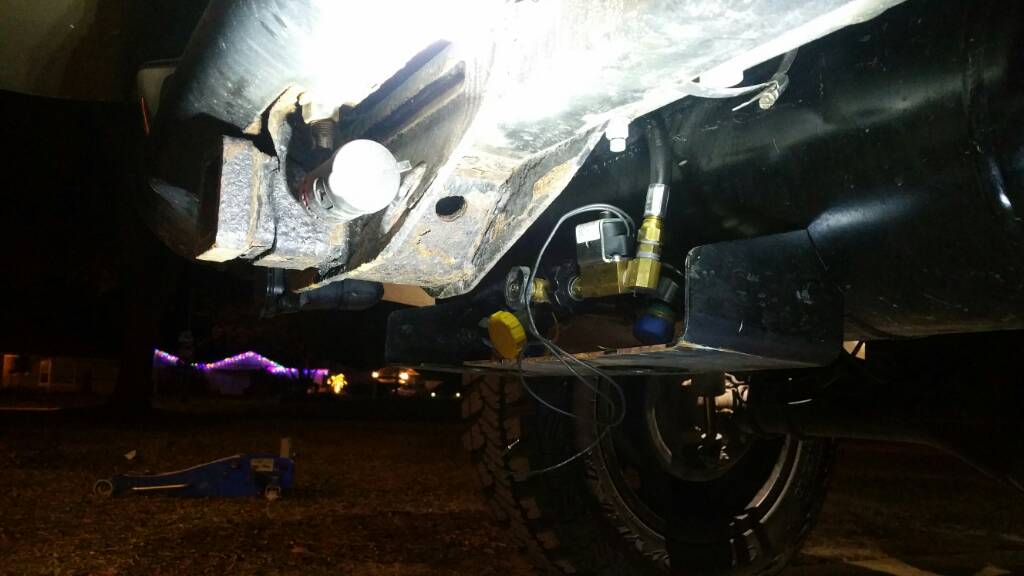 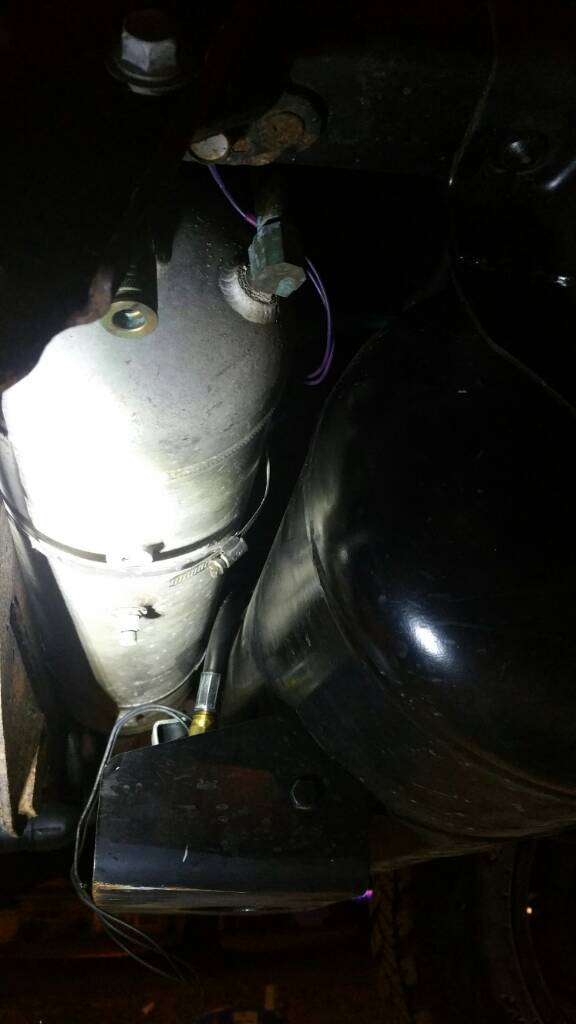 Used a large washer for mounting it.

skygear said:
Another propane task we want to tackle is our camp fire. It is great and we like to use it. Considering doing this... 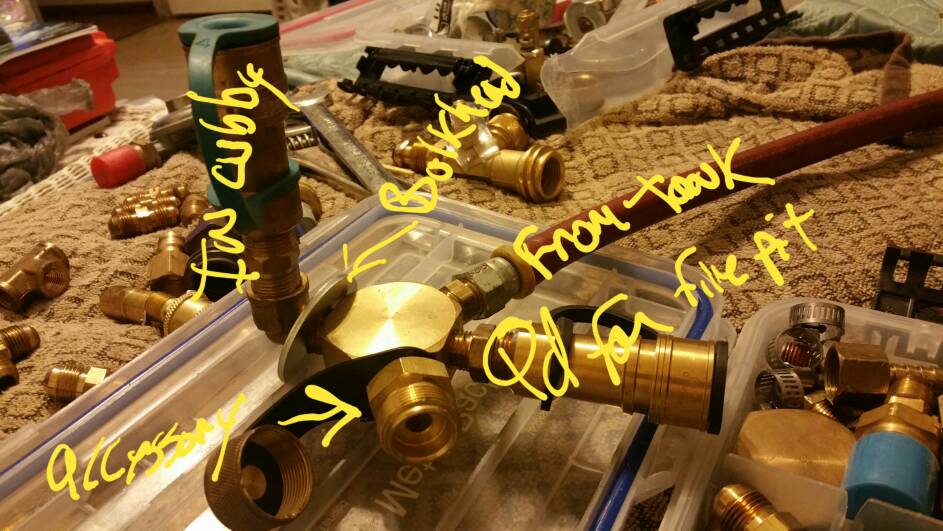 Of course each of those disconnects will be High pressure with the shutoff valves like the one I already installed. The 'accessory' port could be used for the space heater we carry on rare occasions.
Click to expand...


and of course the solenoid is wired to the front to a switch to turn the system on and off for safety and convenience.
R

I installed an on board propane tank in my last vehicle/camper - a pop top Land Cruiser 100 with a Westfalia style horizontal tank with approximately 3 gal capacity. I now have a Tacoma with a flatbed Four Wheel Camper which has 2 removable 10lb tanks. I know this is too late for your consideration, but the removable tanks are far superior to the hard mounted tank and would be what I suggest. A hard mounted tank on a Land Cruiser was sufficiently unusual that many of the propane places we encountered were nervous about filling it, although some would with some explaining and cajoling. It was always a gamble with propane places on the road. Secondly, we had no ability to tell how much propane you have remaining, so I essentially had to fill it before every trip, often with only a gallon. I was always a little nervous about coming down on a rock in just the right way and hitting the tank, even though it was protected with a heavy steel bumper and steel skid. With the two removable tanks, there is zero issue filling them as I just carry them in. I also have at least one easy data point (one tank empty) on how much propane I have left, and have a small digital spring balance if I want to weigh my tanks to know exactly what I have. While we don't use external appliances, if we did want to use a propane fire ring, it would be simple to pull a tank out and carry it over to where we want to use it. The hard mounted tank seemed like a cool idea, and did free some space up, but I wouldn't do it again.

Sorry for being a downer on your idea, but wanted to give a different perspective on the practicalities of this for those who may be reading this.
Last edited: Jan 11, 2017

I agree that a refillable tank is much easier for the regular user to manage as far as what's left and not. Since this is an off the shelf RV tank, it has the built in gauge and all you have to do is attach the remote sending unit to display digitally what's left in the tank. That's in addition to the analog one on the tank.

Honestly, our experience with this tank has been a breeze. If it is a refilling place, we have been 10/10 out of the ~30 ish times over the USA we filled it.

I remember a few times we were at various fill up places trying to get them to fill our aluminum 20#. Since it was a Wellington or similar, and it was not a Steelie, they refused us. Couple places claimed they could only fill their store brand or RV's . Everyone's experiences will vary. After our trial and error, this is what worked for us.

Have been off road on some Harry trails, even scrapped the skid under the tank. We have had no concerns so far. First bump was scary, then when we re read the specs and the rating system for these tanks and approvals. The fears subsided.

Tank has been is for quite awhile. Only recently did we decide to add the ease of use fittings.

Another fitting we have is the Extend-a-stay. It allows us to attach another tank and since modified it, we can fill the tank through it too.

With any mod, just make sure you are aware of the risks. In this case, we doubled our capacity in propane, freed up room, and utilized wasted space underneath since this platform can't hold a 35" spare tire.

After getting BAD info on the propane fittings, we got the real info and will be swapping out to the 1/4" full flow HIGH Pressure disconnects. MB Sturgis 104057 female end with ball valve and the 401111 male end full flow high pressure.

Our solenoid is also a LOW pressure one and will be getting the High pressure version as soon as we hear back from the vendor.

Please update us on the solenoid valve part number when you find out. I hadn't given much thought of on board propane for the Bronco before till seeing the size of some of the tanks. I might be able to find space to squeeze a tank under there somewhere. Beats hanging a propane tank off the swing out tire carrier.

Will do on the source and part # for the solenoid. Yep, the tanks come in all shapes and sizes. There is even a pancake style for the spare tire placement.

On, and the way the tech explained the difference between the 2 products they sell that look identical in the disconnects was different material for the sealing of the valves. So the O-Rings were different. One was traditional round and the other was a moulded one?

Not sure if there is a difference in the 1/4" male plugs, Will order a few to cover our basis though.

Thanks All of our gear is high pressure even the small inverter generator. The generator has it's own regulator assembly. I wouldn't want to run the generator off the setup but it is good to know I can if I have to.

From what reading we have done, looks like the internal tank pressure of the tanks are in the 250psi range. All of the items we have are also 'pre' regulated. Going to hook each of them up and measure the pressure after the regulators just to see where they really are at. Would be nice to put one regulator on the tank and remove the others we have. Or not. Just a curiosity at this point.

I probably would advise against that as some have extremely low pressures measured in "inches of mercury".

The camp fire is definitely HIGH, the partner stove is also definitely HIGH. Buddy heater, that might be lower since it normally uses the disposable 1lb tanks.

I think the Big Buddy is high pressure as we run ours off of 20 and 30 lb tanks and there is no regulator. Yes I do use the hose they recommend and a filter at the heater. One pound tanks are considered high pressure just like the larger tanks.

OK I had to go dig up the manual for me heater so I can explain why I say high pressure. The Mr Heater Buddy series heater have a built in regulator so no external regulator is required.

"WARNING: ANY HOSE CONNECTION TO A QUICKDISCONNECT FITTING ON HEATER MUST BEREGULATED TO 11 inches W.C. PRESSURE."

I wonder why they say it has to regulated down to 11"WC pressure when using quick connects. I run the buddy heaters all the time straight off the 20 and 30 pound tanks with no regulator.

The Camp Chef Camp Oven uses low pressure and uses an attached low pressure regulator. This allows me to directly connect either 1LB cylinders or the larger tanks. They do offer a hose that will eliminate the regulator at the stove and moves it to the tank connection.

Rather than worry about all the regulators and tank connections, my thought is to just continue to connect it the same as I have always done. I have hoses that allow me to connect to any large tank on one end and the large male fitting similar to the top of the 1 LB bottles. All of my equipment uses 1 LB bottles so my hoses are a direct threaded connection. I would just need to get hoses that have NPT threads on the tank end of hose so I can use quick connect fittings.

Ok been thinking about the Mr. Buddy requiring regulator if using quick connects as I was typing the above. One main reason I can think of is that the male end of the quick connect is not what is know as a "dry break" connection. When you disconnect, whatever propane is in the hose comes out in your hand. Using low pressure assures that the user is not exposed to high pressure propane which can FREEZE anything it hits in the atmosphere.

Since you are using high pressure disconnects and so will I then diligence is MANDATORY on our part. Shut off propane to the device at the valve to the quick connect before turning the device off. This way any pressure can be bled off before disconnecting the hose. Should be done regardless of the pressure. I already do this with mine when shutting them off even if not disconnecting hose. Reason I have been doing this is too increase hose life. I learned the hard way about propane and it attacking the lining of the propane hose. Yes these are propane use rated hose. It causes oils to leach out of the lining. Polymers are oily. I ruined a heater by leaving pressure in the hose and not using the device. Now I turn off the tank first and let the heater go out on it's own so that the propane pressure is bled off the line.

So for each quick connect there should be a ball valve before it. Shut off ball valve. Bleed pressure off the hose by leaving device on till it stops. Now it is safe to disconnect the hose.

Will do a short video on the operation of these QD's we have. The safety IS the bay valve built in. You CANNOT disconnect the hose without closing the valve. The valve handle physically stops the disconnect collet from moving.

We do the same/ not disconnecting the until after the appliance has used the remaining fuel in the lines.