been doing a bunch of driving and trying to do some video.


also did some stuff:


turned my dual opening into a single piece and its WAYYYY better.

sealed the gap between roof and tent.

and added some snaps to the bottom of the door openings because they have noting there from the factory and if you roll over in the night you can push things out of the tent and let bugs in.

also, I got an alignment, broke my alternator, charged my AC, went to california, broke my AC 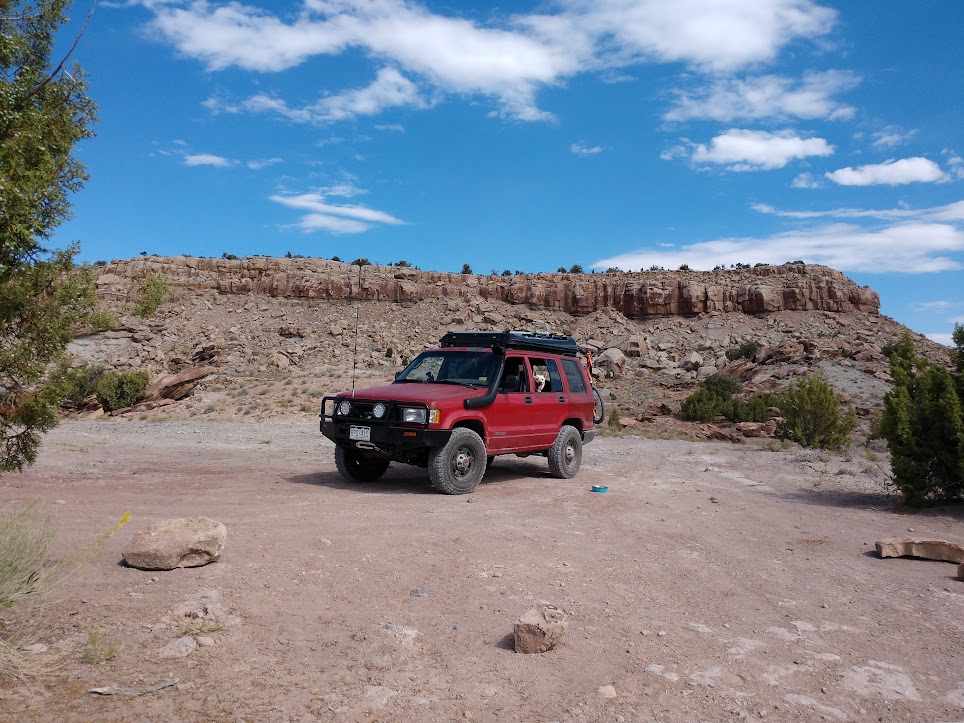 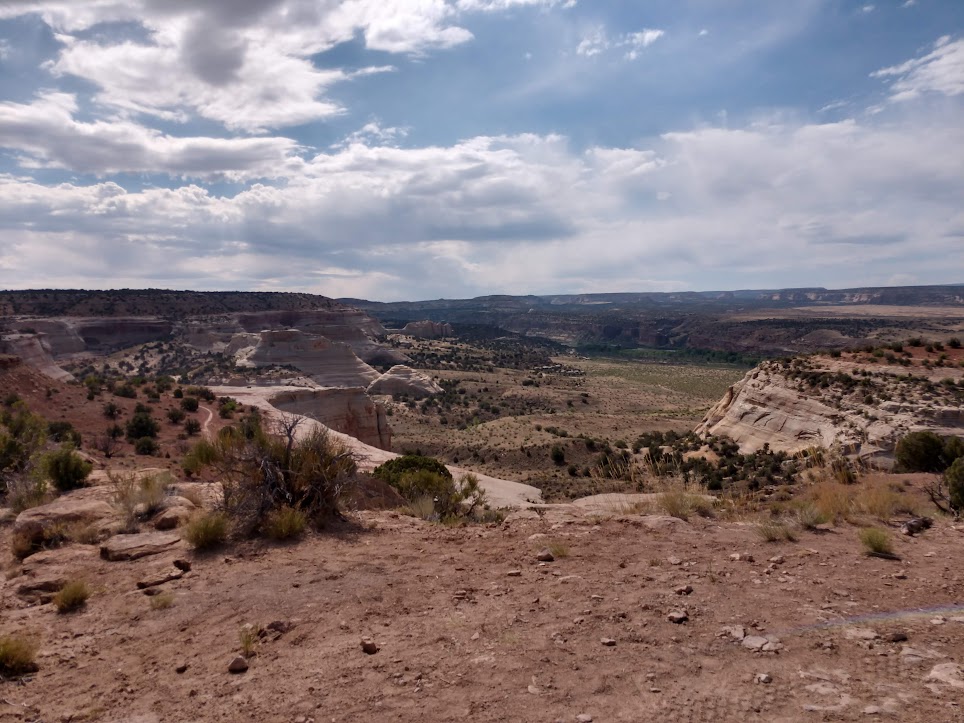 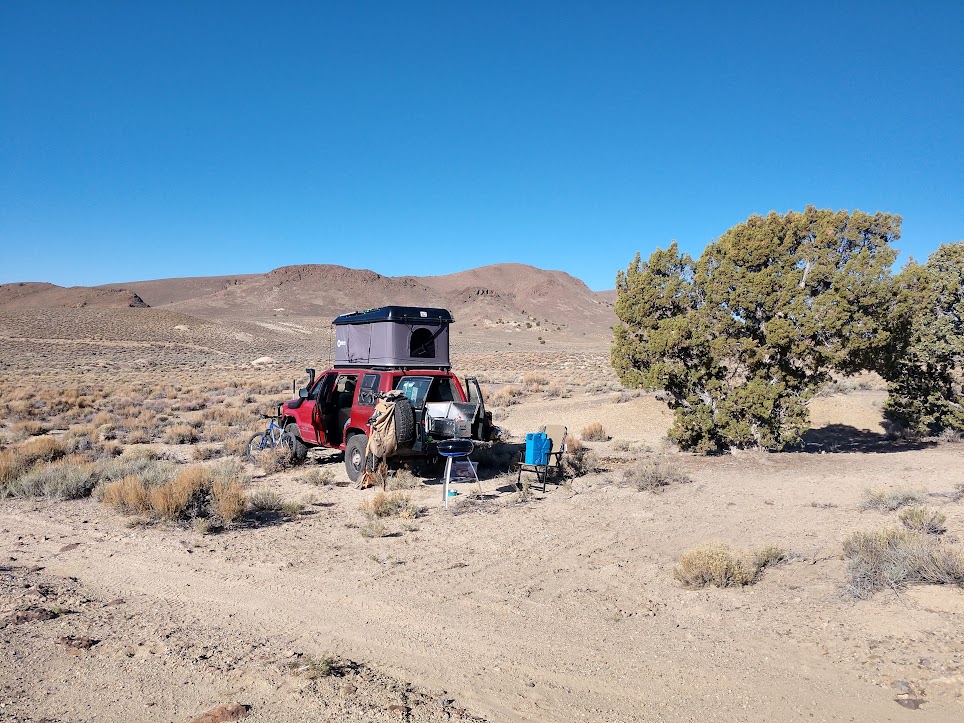 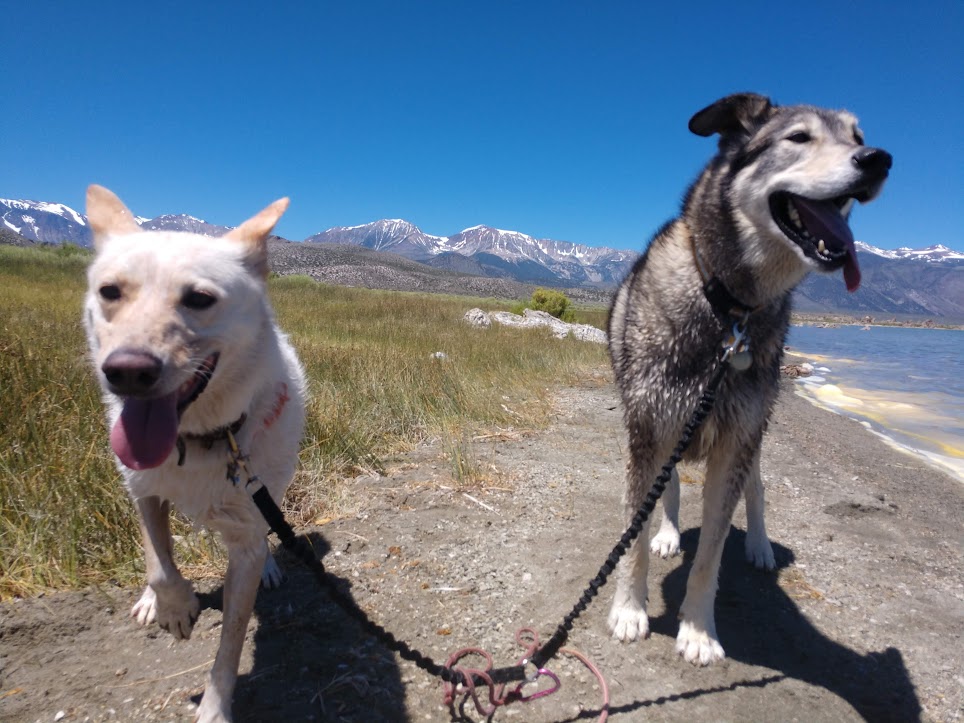 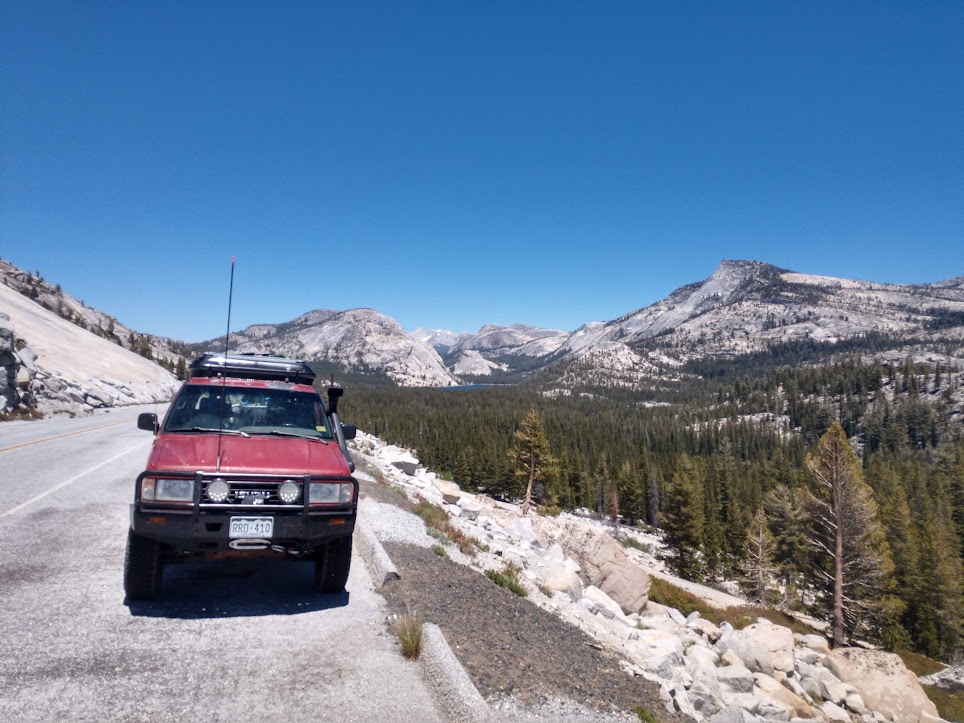 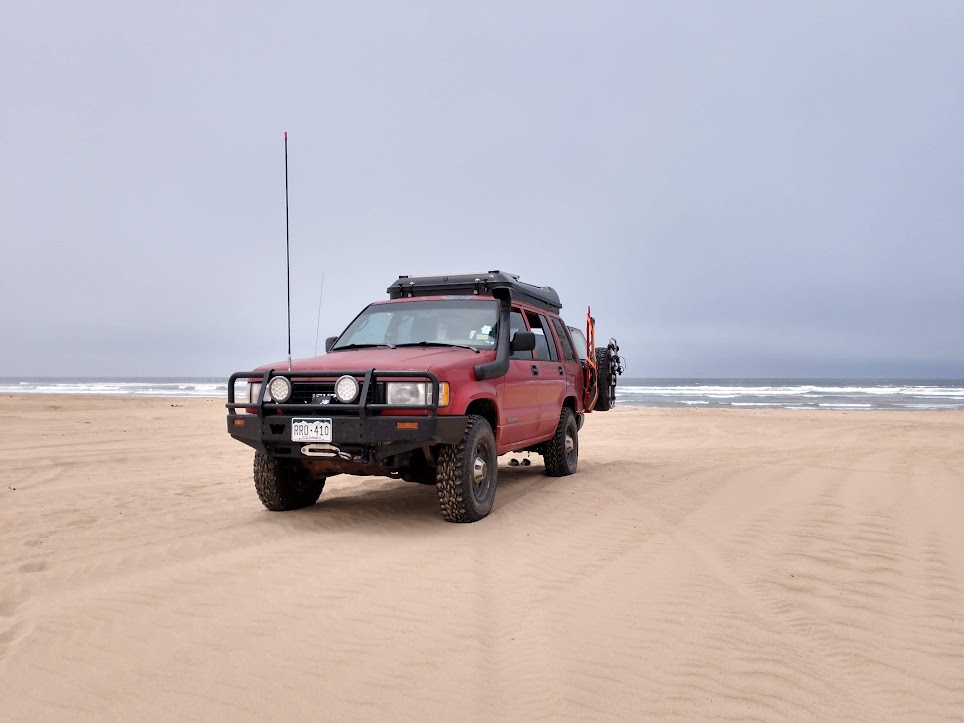 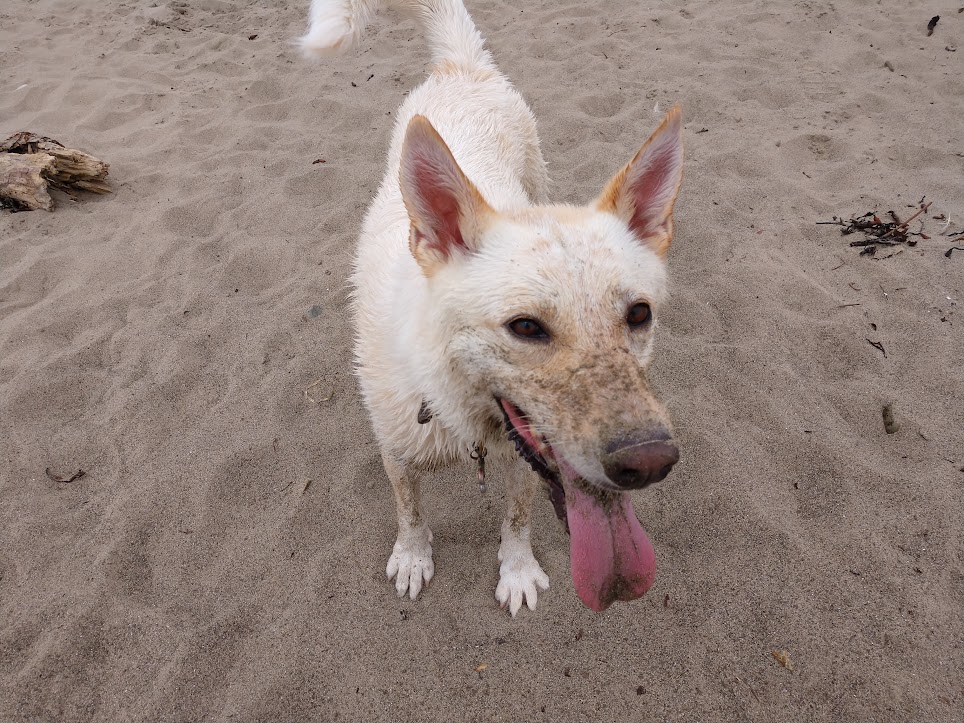 Puka got a tick in the eastern sierras and all I had to remove it was a knife, but he didn't seem to notice 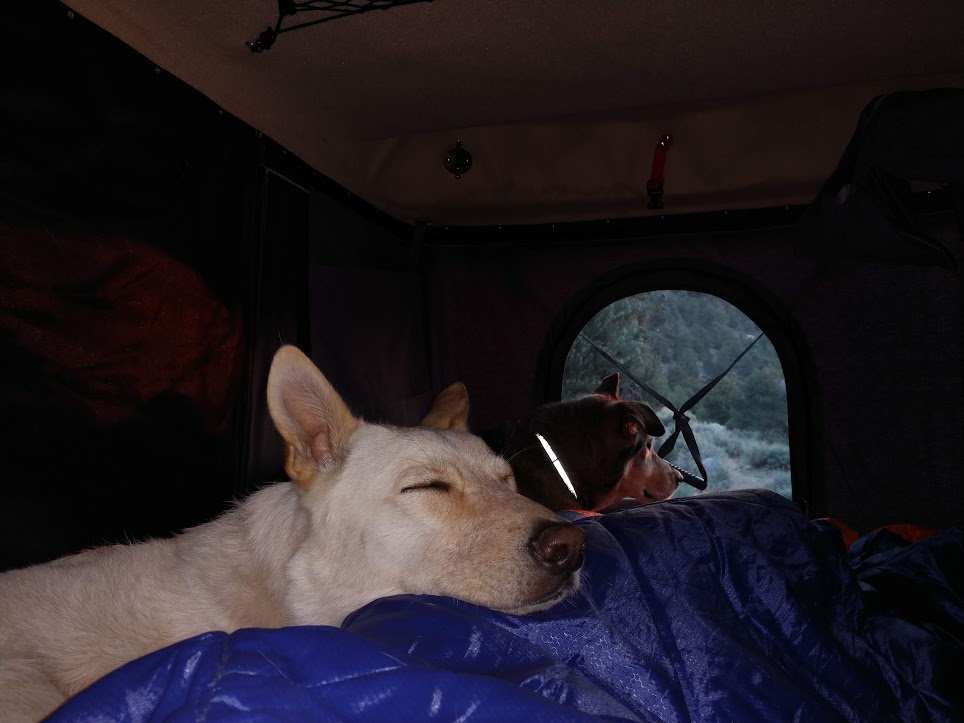 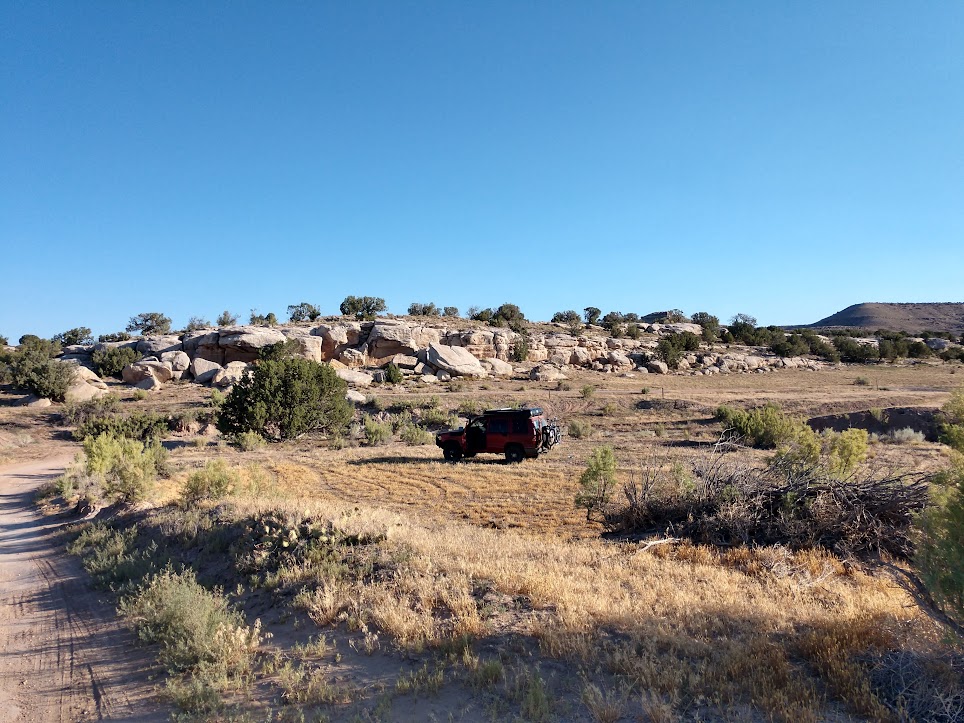 Then I went north in Colorado with my brother and a couple friends and had to spend two days with this guy in a $100k jeep that took literally 4 hours to set up and break down his camp site. took this picture after I'd 99% finished slowly packing and had to wait for him, obviously he's not even close. Nice guy, but I still can't believe how long he took 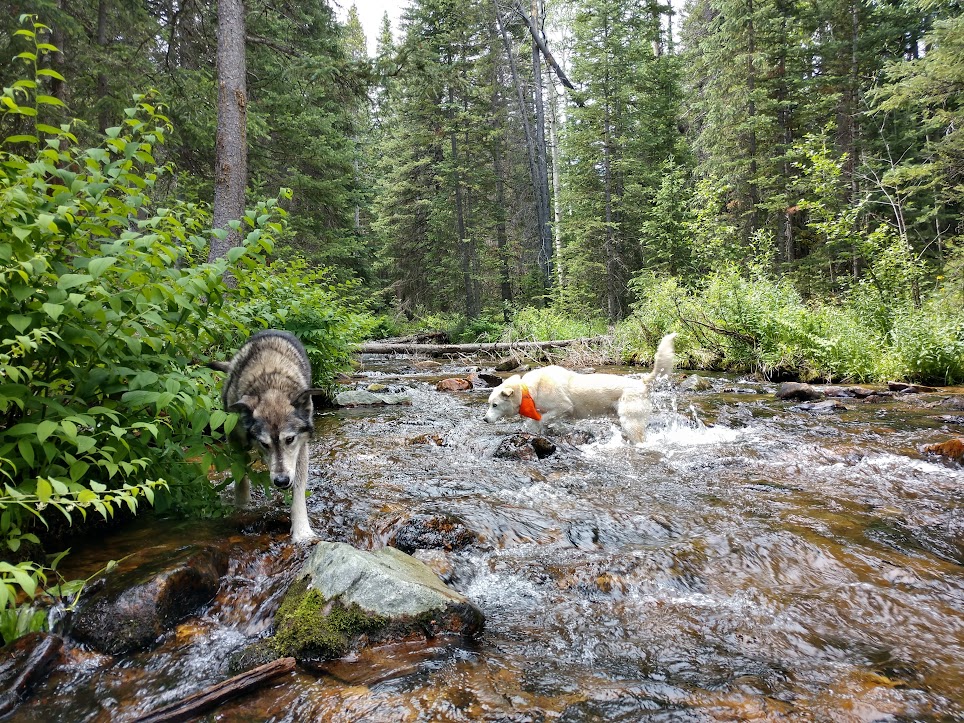 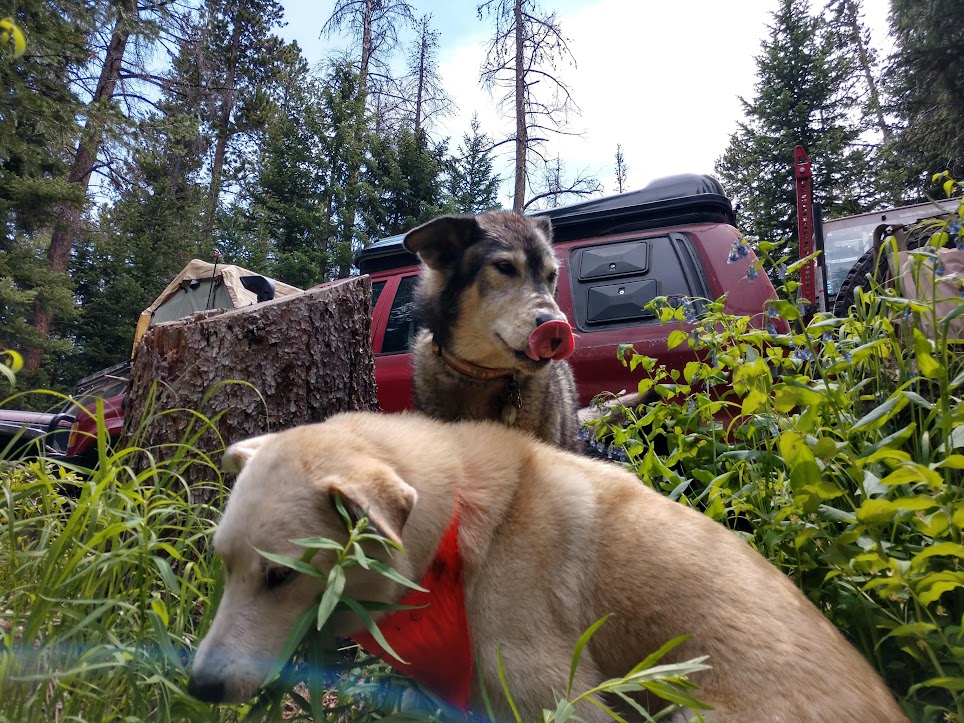 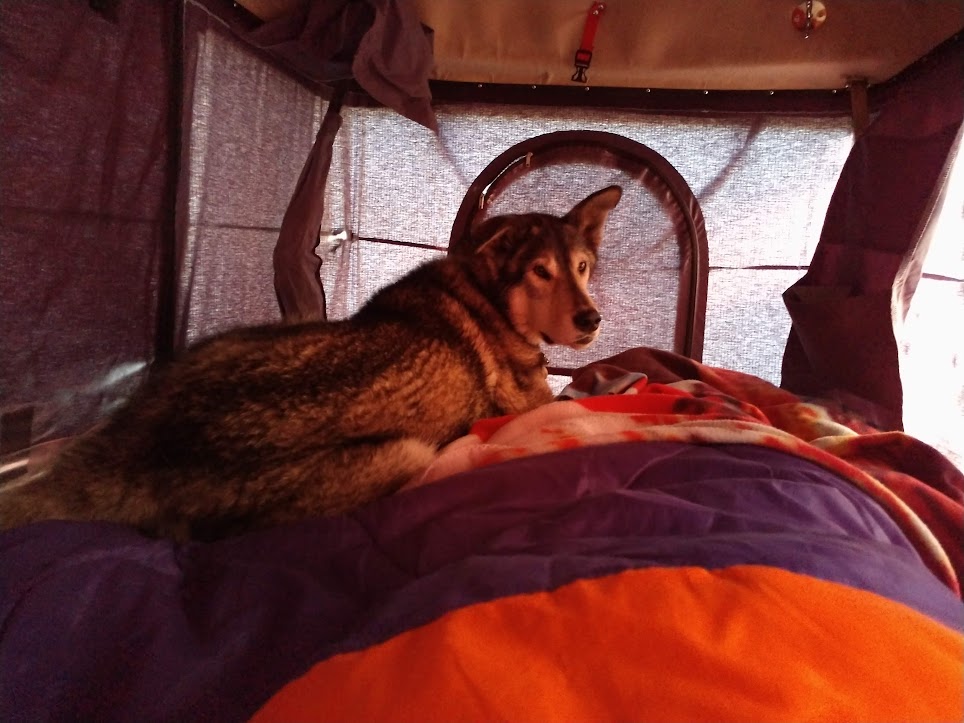 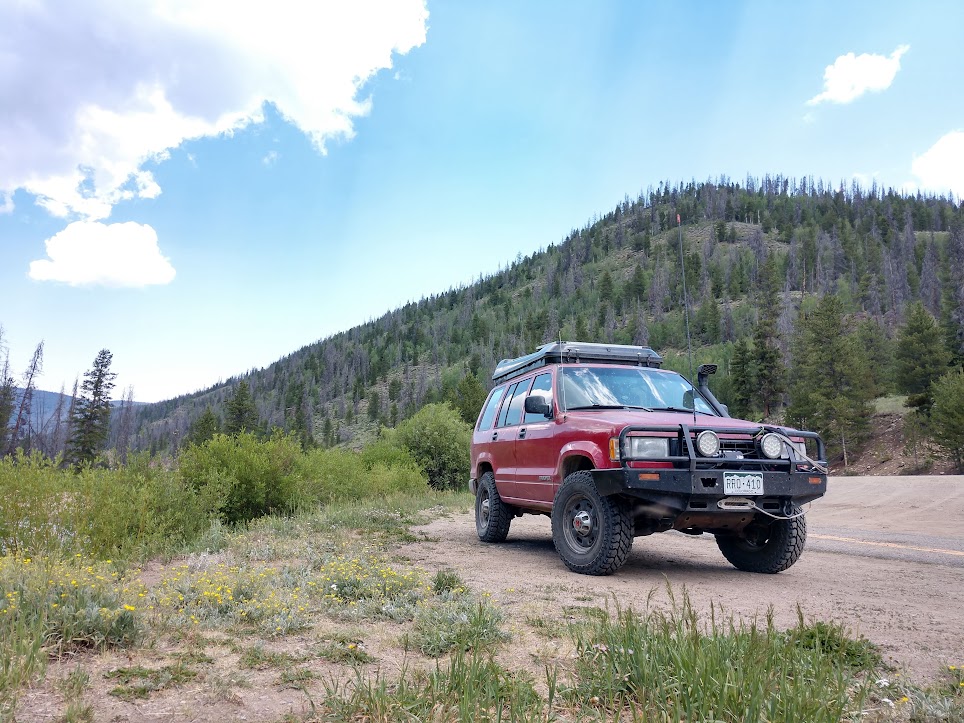 didn't really take any pictures or video while on the trail because we were in a bit of a hurry and the trail got really gnarly and then it rained and it got super tough. Had to use my winch for the first time, but only because I wasn't watching for a second and drove right in between two rocks and high centered my rear axle. the rest of the trail I somehow managed to power through, spun the tires a lot and bounced of a bunch of stuff. the rear LSD works good as long as you give it lots of power and keep the speed up, so that's what I did. somehow bent this rear arm in the process

tbh I'm surprised I didn't do any more damage... but now its definitely time to install my front air locker and rock sliders I got from Classic Cit Overland, and beef up the extra suspension arms I have on my parts car.

Also drove on the super dry dunes in northern colorado and bogged down REALLY bad about 15 feet in. had to drop my tire pressure from 22 to 15 psi, and I was barely able to crawl out. was pretty crazy, and much different than the comparably moist sand at the Oceano dunes in california.

RoadBoss said:
well I ended up spending a bunch of time doing maintenance on this thing, which is boring AF so haven't been updating much.
-Changed oil in trans, tcase, front diff, rear diff
-fixed front diff breather, as the fitting had broken and let water into the front diff oil
-new fuel injectors and FPR
-new exhaust gasket from left bank to y-pipe
-added rear coil spring spacers (has OME 919 springs in it already) to make up for the extra weight I've added, went ahead and fit some Nissan frontier nitro shocks which are about 2" longer extended, an only about 1" longer compressed. also made a bracket to space up the rear brake line Tee so that the brake line won't stretch, as well as extended the rear diff breather.

and after all that I realized the exhaust system needed to be changed as the cat was clogging up after it got hot, and it would start to cut out under high throttle input, and the rest of it was rusting out.
so I decided to get all budget racecar with it, since that's the only way I know how to make exhaust systems. 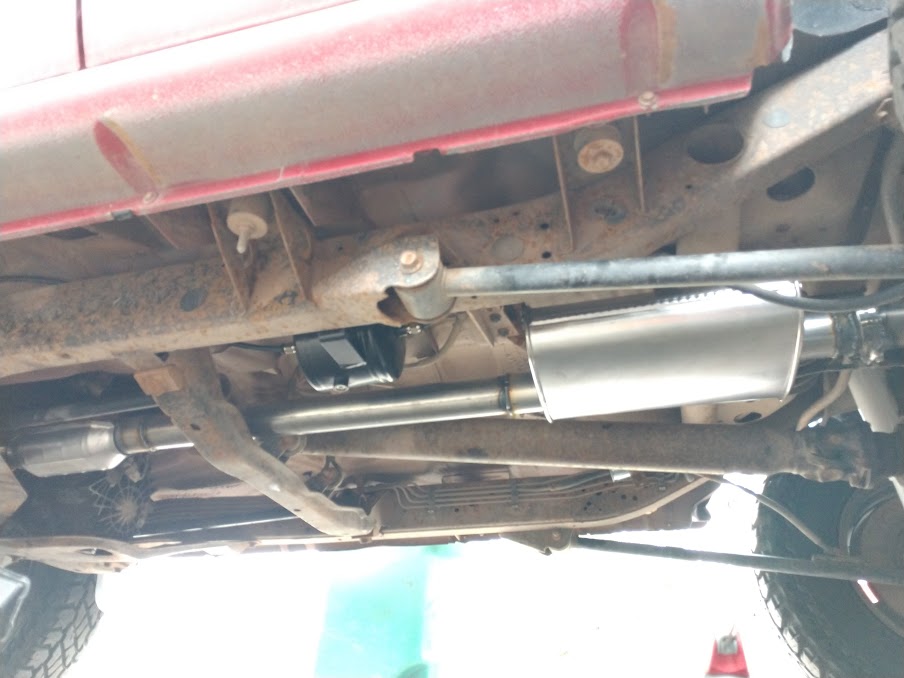 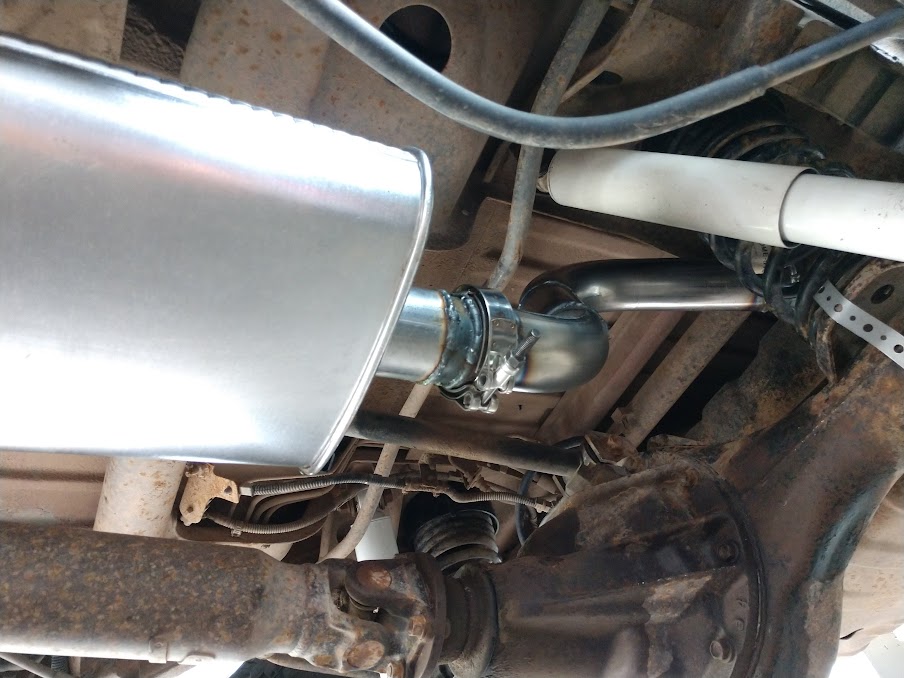 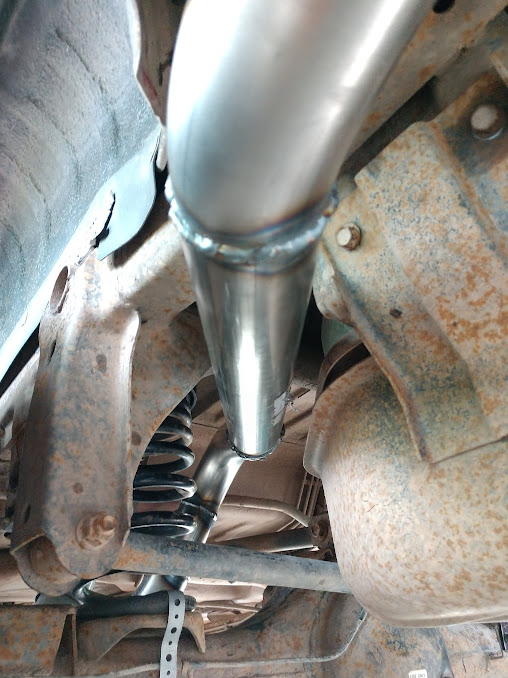 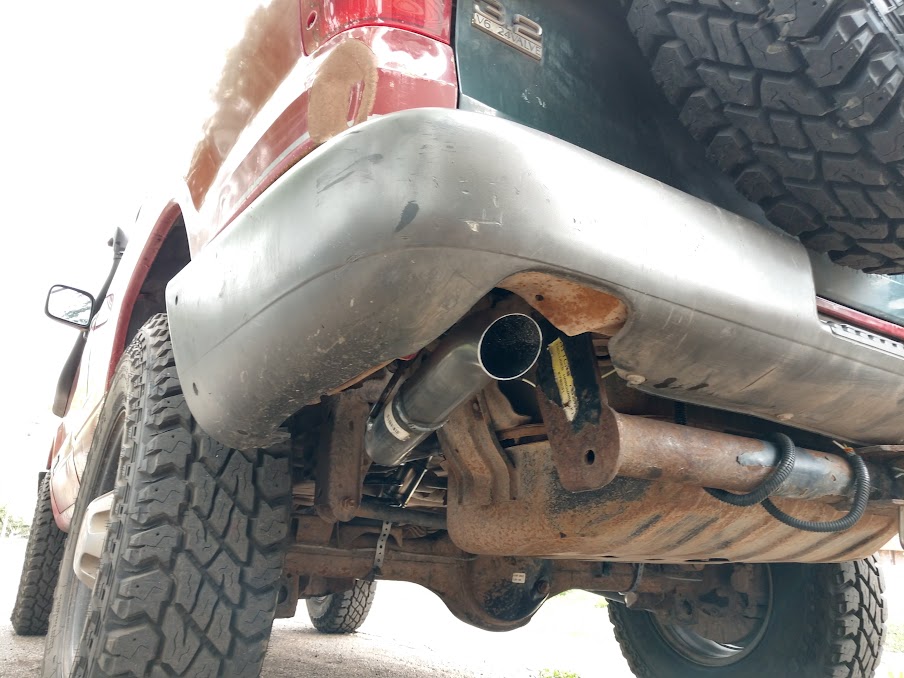 ugly welds, don't care. it works. also retains all the factory hangers which I'm pretty excited about, and I can't tell any difference in volume when cruising on the highway, which is great. around town with the windows down is slightly louder, but not bad.
the truck runs really good now too, though I probably lost a little low end torque from the bigger exhaust. and after all the maintenance it no longer has a weird shudder at 55mph, which I thought before was just wind noise.
Click to expand...

The exhaust looks great! Did you buy it as a kit? I really need a new muffler and tail pipe on my 92 Trooper.
R

82DATSUN4X4 said:
The exhaust looks great! Did you buy it as a kit? I really need a new muffler and tail pipe on my 92 Trooper.
Click to expand...

thanks, nope I built it all custom. unfortunately I couldn't find anything aftermarket for the trooper, and OEM replacement pieces are not cheap. ended up just getting a 10ft stick of straight pipe and two mandrel U-bends, along with a super cheap universal cat and muffler

PPCLI_Jim said:
NC-TROOPER did you reinforce yout door for the fuel can or?
Click to expand...

yeah I did
R

been doing a little work...

bent the hell out of my stock control arms, so I welded some angle iron to a spare set. hopefully this will help a little till I want to spend $ on some proper replacements

also noticed the old OME springs were getting real saggy so I popped in my spare much newer set from the parts car, probably lifted it up at least an inch

added this aluminum track over the rear door to act as a rain gutter, and to give me a place to tie stuff to (tarp for rain shelter, or add support for too much weight on the rear door)

also got this cool armrest

also starting to get ready for my front locker, so I installed the switch and added a bunch of USB ports and 12v outlets

also screwed some stuff to the ceiling for storage, to hold random things and my travel guitar

Jupiter's Travels in Camera: The photographic record of T...
by Ted Simon
From $142.98

also, both the dog bed and the fridge have lots of storage underneath which is real nice.
and I put together this video from the first portion of my trip to california.

next step is welding on my rock sliders, followed by my front air locker.

Very impressive build and thanks for taking the time to document and share it with us. I'm always interested in seeing ingenuity and resourcefulness at work, and you've certainly demonstrated those qualities in putting together a capable vehicle without breaking the bank.

I love it. I am ready to have my trooper back on the road, I really like your shower/water set up.

what tent is that?

What size tires are you running on this?
R

justbecause said:
I love it. I am ready to have my trooper back on the road, I really like your shower/water set up.

thanks! its a Denver Outfitters tent, which is the same as the roofnest sparrow X


Jc1986.carter said:
What size tires are you running on this?
Click to expand...

You have a great Trooper.....like a twin of my one

Great thread. Great build. Everything you need and nothing you don't. Small enough to get to cool places easily and probably didn't cost you 60K!