dwh said:
Oh crap. I forgot all about getting you what I had of the manual. Sorry...no excuse. I did try after we first talked about it and for some reason the email failed to reach you. Then I had to run and decided to figure it out later.

As for mine, I finally got it running by shifting all the wires on the distributor cap..uh...I think it was counter-clockwise, but now I'm not sure. But yea, the two number 1s molded into the cap were both wrong.

I ordered the new low-profile galvanized roof vents, but haven't installed them yet. Also ordered a bunch of LED light fixtures. Singles and doubles. 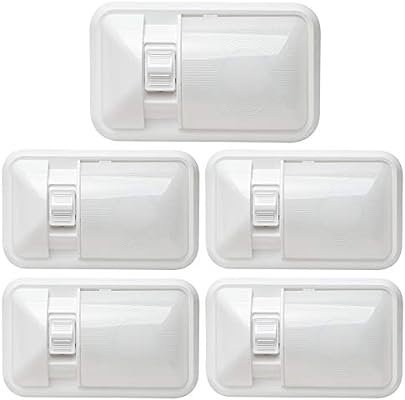 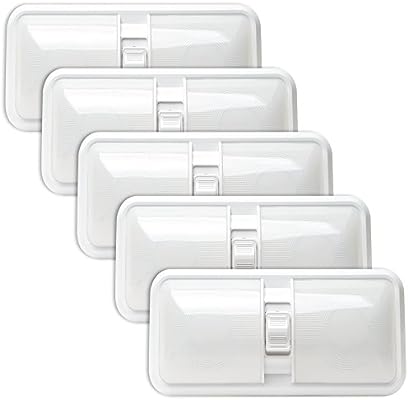 But OMFG they are enormous. I didn't even notice when I ordered them. The singles are 8"x5" and the doubles 11"x5".

It's not an issue for the doubles as they are all in the front and on flat surfaces with lots of room. But the singles are too wide to fit between the upper cabinet doors in the rear. Which is fine actually...I'm going to mount them facing down on the bottom of the cabs and leave the originals in place for now until I find something suitable.

Same in the head. There is already power in the ceiling for the vent, so I can use that the install a double up overhead. And eventually find something to put in the original vanity spots.

In the front over the dinette, on the bottom of the overhead cab is a double, which a switch by the door turns on one half of. Haven't decided yet what I'm gonna do there. I'm thinking a double over the dinette, then pickup that extra wire and put a single nearer the entry to give more light on the steps.


But yea, I'll take what you can give of the manual. I only got half of the one from that one guy and he never answered after that.
Click to expand...

Hey hopefully this will help.. I know it helped me tons.. I also have the 120v diagram just not saved to my phone.

NATESHIELDS1005 said:
I found what I think to be the entire owners manual, along with a lot of other info that may come in handy. Although, mine is the 25 ft 72 with a 413. I'll do my best to get some good pics of it and any other document I think may help as soon as possible. It's the least I can do for all the help this posting has done. How're things?
Click to expand...

I am interested in any manuals that you have or would be willing to make copies of.. I will gladly do the same in return.
A

KGOSVENER said:
Just joined and just picked up a 73 Superior 2500, everything is there and in good shape. Didn't get to hear it run because the negative cable came into contact with the positive post. I am assuming that it only needs the fusible link replaced but who knows.......but I have to thank you greatly because this thread has helped me a ton!
Click to expand...

not sure why whenever I open this thread this quote comes up..must have fat fingered something so I'm gonna try to post so it goes away hopefully..sorry new to forums
A

Great writeups! Love your sense of humor. I'm the owner of a 73 25ft Anniversary Edition. Luckily my previous owner did what you're trying to do - he was retired, loved Superiors, and spent 10 years on a renovation/restoration that he just managed to finish before he died. I'm in touch now with his widow...it really was his pride and joy so I feel fortunate to have 'inherited' it.

Hope yours doesn't take that long! Sounds like you may have moved onto other projects...they're like stray dogs, they seem to have a way of finding their owner (I know of what I speak).

Anyway, would love to trade materials if you're up for it. I do hope you find the motivation to continue on. These really are great machines once they're sorted. We're in Minneapolis and took a bunch of weekend Covid getaway trips in it and then a 'big' trip with the kids out to Glacier National Park last summer.

Every classic RV should have a name and ours is Irwin. Anyway, Irwin got so many smiles and thumbs up I almost started getting jealous. Made it there and back with only one breakdown in Montana - luckily a little nothing town had an expert like your carb rebuilder - knew all about the Dodge Chassis, put in a new alternator, and had us on the road the next day for $300 bucks.

This weekend I'm off to get Irwin out of winter storage in some random little town with an abandoned boat factory that now rents heated storage for cheap.. Can't wait to see him!

Will send some pics tomorrow and maybe from the big 'pickup' this weekend.

Would love to see more posts.....seems like they tailed off right about when you were about to get yours started again. So close!

Yes his sense of humor is great.
J

Have a 1971 Superior 22' with Dodge 413 and automatic. Was in good running condition. Had a small transmission leak but was easy top it off. Allowed a knowledgeable mechanic friend to drive it to a motorcycle rally, as I was riding my motorcycle. He failed to release the parking brake, which finished the transmission clutches. He agreed to help me pull the transmission, but moved out of state. Rental tenant caught the polycarts on fire with a cigarette that were setting in front of it. Fire damaged the front panel, doors, headlamps, wipers, etc. but no inside or engine damage. Fireman knocked out a few windows to make sure no fire was inside. Salvage yards don't want it because to much wood inside and roof is to tall for crusher. I had an experienced RV mechanic remove the Generator, refrigerator, A/C units (2), numerous exterior parts like ladder, mirrors, handles, etc.. Planning to gut the interior and send to landfill. Then cut the upper portion off so salvage yard will take it to be crushed. Wanting to offer owners manual and any parts for sale to anyone interested. I am capable of pulling the engine and transmission if it is worth my time. Motorhome is located near Oklahoma City with a 73020 zip code. Buyers can request USPS, UPS, or Fed-Ex and pay for the shipping charges. To many items to try and list or price. If anyone is interested please E-Mail me at jd.ogle@cox.net with what you are interested in. Not looking to make much but more hoping to help those who might need the parts.
You must log in or register to reply here.
Share:
Facebook Twitter Reddit Pinterest Tumblr WhatsApp Email Link