I own/have owned vans with both concepts. Insulating a cab is impossible. Due to its large windows it is a major heat source in summer and always cold and wet in winter. Having a solid door between cab and cabin has one additional advantage. The cabin can be much better secured against break-ins than the cab. If you ever think about international overlanding or shipping this is quite relevant. But on a nice day it is great to sit on the comfortable turned front seats (much more comfortable than the dinette) and look out through the huge windows in the cab. Therefore my camper used in the first world as a 3 season camper has the cab integrated. My camper I used for overlanding in the 3rd world in all climate zones had a solid door between cab and cabin.

When I did the cab insulation and and sound proofing project, the only metal I left exposed/uncovered were the reinforcement "struts" or ridges that run under the roof and sides sheet metal to form the rigidity for the cab - which are covered by the headliner. And then also the exposed metal trim around the doors, because those are actually visible when the door is open or closed.

In retrospect, I would have covered those struts with some of the sound matting because that would have prevented a lot of the condensation buildup. I didn't cover them because acoustically-speaking covering those struts doesn't do much but from an insulation/moisture barrier perspective it clearly does.

I'm very familiar with the soundproofing mats/rolls having used it for years and done many vehicles with it but - If we are really using hindsight 20/20 - since I had the cab completely torn down anyway, I wish I had used one of the new spray-on insulation and sound-proofing products like lizardskin or something like that.

I think that would have solved the problems I was wanting to solve - insulate and soundproof the cab significantly - while also solving the problem I didn't realize was as bad as it is - condensation in the cab.

If I ever find myself needing to take the headliner and side panels out of my cab again (god I hope not) I will probably add some matting and potentially fill in the struts with expanding foam.

Anyone that is considering tearing down their cab area to better soundproof and insulation - I would DEFINITELY suggest they use a spray-on product which will serve all purposes better.
S

If anyone is interested in seeing an AEONrv in person here is our 2022 event schedule.
https://aeonrv.com/events Correct, thanks for pointing out the typo.

We'll be at Overland Expo West 2022 hanging out in Total Composites booth (with think it is booth f20) with @Victorian on Friday afternoon, all day Saturday and Sunday morning. We'll be offering private showings of the AEONrv. Just reach out to us directly at sales@aeonrv.com or direct message us on social media if you are interested. We hope to see you there.
J

I'm curious about how the exterior panels are joined at the corners. On one video that I watched, it looked like there was a separate "cap" piece covering the exterior joint that had silicone sealant under it. Is that the case?
Thanks!

jnick said:
I'm curious about how the exterior panels are joined at the corners. On one video that I watched, it looked like there was a separate "cap" piece covering the exterior joint that had silicone sealant under it. Is that the case?
Thanks!
Click to expand... 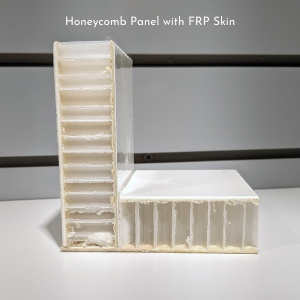 Composite Myths DEBUNKED 1.) What others are saying: “Go with honeycomb panels!” What we say: While we understand the attraction to honeycomb- they are durable by design, we want to be clear with one of their biggest disadvantages. Honeycomb composites offer close to zero insulation. At Total...

jnick said:
I'm curious about how the exterior panels are joined at the corners. On one video that I watched, it looked like there was a separate "cap" piece covering the exterior joint that had silicone sealant under it. Is that the case?
Thanks!
Click to expand...

No silicone sealant used. Only a marine/industrial polyurethane adhesive is used to glue the panels to fiberglass pultrusions and to seal things up.
S

We are in production with our first models and here are some pictures of our custom class 3 steel hitch with 2" receiver, 7 pin tow harness and 2 recovery points. Max towing 4,500lbs or 3,500lbs at max GVWR. Hitch weighs 59lbs. Aluminum bumper brush guard bolts to the hitch and weighs 19lbs. Has license plate holder with LED light. All powder coated black.