Figured it's time to start a new build thread as I think I've finally settled on the Canter I'm going to keep for a while.
After purchasing a couple of single cab trucks and driving them for a bit we've decided to purchase a dual cab.
We spent a few months looking around till locating a good low km example with the turbo addition and Super Singles in Brisbane, after booking flights we flew up and drove it back to Melbourne!

The truck had been used to tow the gigantic boat in the background and currently had a tipper tray installed which we weren't going to require for our build plans so we planned to remove it.
I was still unsure of the construction method for the the rear but knew I wanted a lift of camper so the truck could be multi useful going forward. After a bit of searching and a bit of luck I found
a canopy for sale a couple of hours away that was pretty much a perfect size for the truck! So before ripping the tray off, I drove over and picked it up..

Being inspected by my old man....

Have since pulled the tipper tray off and sold it along with the bullbar and winch setup to create a simplified alloy tray and kinetic subframe on the rear. Also with mounted tanks between the subframe for diesel and water.

Before kicking off the subframe build I decided to add another 33 gal tank and put the smaller one on the other side to get a bit more range than the tiny 80l tank it came with, I plan on having another 55 litre diesel tank between the subframe as well for extended range. Through this whole time I was also planning what the build was going to be, I've decided to put a pop top into the green canopy and have a slightly longer alloy tray to have the spare wheels on the rear. Below is the insitu render I created to make sure it was all going to fit up correctly..

Dual tank setup... (and a bit of body work to complete also)

While I was waiting for some more steel to arrive for the subframe I decided to redo the snorkel, bought some 4 inch stainless pipe and fittings and started cutting!

And as of today this is the pic of the progress for the subframe build, hoping to have the rails on before the weekend and start bolding down the aluminium tray extrusions I bought. I got some quotations for a new tray and a subframe to be built and found its VERY easy to order truck tray alloy extrusions to do it yourself along with the steel etc required and the mounts for the subframe

Anyways, I probably should have started a thread a little earlier but better late than never!

If people are interested I'll keep adding updates as I go from here..

Sweet! Welcome to the dark side! You won't regret it!

Hi and welcome.
Just check those rear cab mounts the LH side looks cracked or could be my eyes.
L

So a few more updates, have been busy on the subframe and now have it welded up and mostly painted. Just going through the loation and fitment of the 100l water tank and the 55l diesel tank up front. plan is to just have a y splitter from the 55l tank into the fuel line for the sub tank and and an inline tap to activate turn it on/off. As I intend it to be a last resort tank I don't mind having to get out to switch it. The other two tanks will be on a pollak tank switcher to make it easier..

Also a bit more progress on the canopy, have removed the doors etc to start stregthening the frame etc prior to cutting the roof out for the pop top. Have purchased the aluminium and am planning to have the frame welded in over the next few days by a tame tigging friend of a friend.

Excuse the jerry rigged motorbike trailer to move the thing around whilst there's no tray on the truck!

The plan for strengthening looks a bit like the plan below. Going to support the centre uprights cross ways and then to the back, under this frame will be the storage and side access kitchen etc and once the roof is cut out I am going to glue and rivet a 25x50x3mm section around the top opening to add strength and to the fix the aluminium pop top extrusion to... (in this image in black). I am also adding a lot more strength to the floor to make it rigid as well to add with strength to the body.

Next steps is to start bolting the aluminium tray extrusions to the subframe and make some mud guards etc. Then onto the myriad of other projects like adding the tank switcher, wiring in the tail lights, number plate lights and mounts etc etc etc etc...

Mananged to get a few things done over the last week, have mouted the rear water tank between the chassis rails and have had the air cleaner mounts made up.

Still trying to figure out how to mount the front pastic diesel tank but reckon I've got it sorted.. Will be starting on bolting down the aluminium tray soon which will then mean I can finally get it registered after fittin some mud guards and all the lights/buzzers.

I started on adding the strengthening to the canopy as well, I've opted to try and glue down a lot of it to see how it works. I haven't had a chance to really test it yet as its going to have a fairly long cure due to the ambient temps at the moment. The two lengths are 25x100x3mm section glued down to try and stabilise the floor before I put in the wooden floor boards and isulation underneath. I'm going to try and salvage the cross sections from the roof when I remove it to lay between the longitudinal rails I've glued down.

Began measuring out the upright strengthening sections and bed height cross rails to see how it's all going to come together. I think on'ce the aluminium sections are welded in there's going to be enough rigidity to remove the roof and then rely on the aluminium extrusion pop top section to give the opening enough rigidty to keep it all inline. (fingers crossed a bit on this!). Hoping to have the tray on by the weekend and get the canopy welded up by sometime next week. Then it's onto roof removal and fitting the pop top on. I am planning to order the FRP roof panel after I've got the top and bottom sections mounted to make sure I've got the dimensions correct and can do as little cutting of the FRP panel as possible. I've got an idea to creat the pop top mechanism with the same concept that's in the fourwheelcampers style where there's the big hinge at either end and gas struts to lift. My last troopy pop top had the scissor style lifters which I found to be a pain to close when you are going for a high extension above 500-600mm (I'm planning for 900mm of rood lift on this deisgn).

PKDreamers said:
Hi and welcome.
Just check those rear cab mounts the LH side looks cracked or could be my eyes.
Click to expand...

I had a good look around and think its just gunk built up along the seams, if I'm looking at what you were looking at that is..
U

Ok no worries thats good then .
They are prone for cracking there,our has cracked just got to work out when to fix it.
Last edited: Jun 2, 2020
L

They’re no fun to move around either let me tell you! 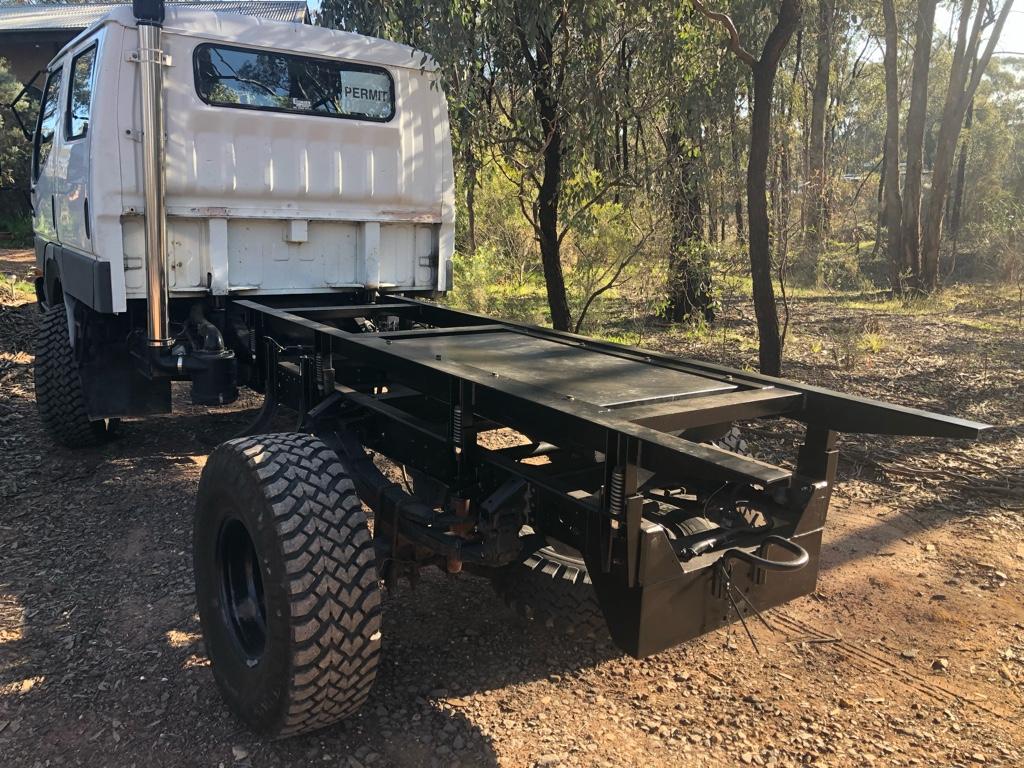 I was just sitting it on top and placing it where it’ll roughly end up. Still need to finalise the diesel tank in the subframe before bolting it all down! (And extending the subframe a little bit) 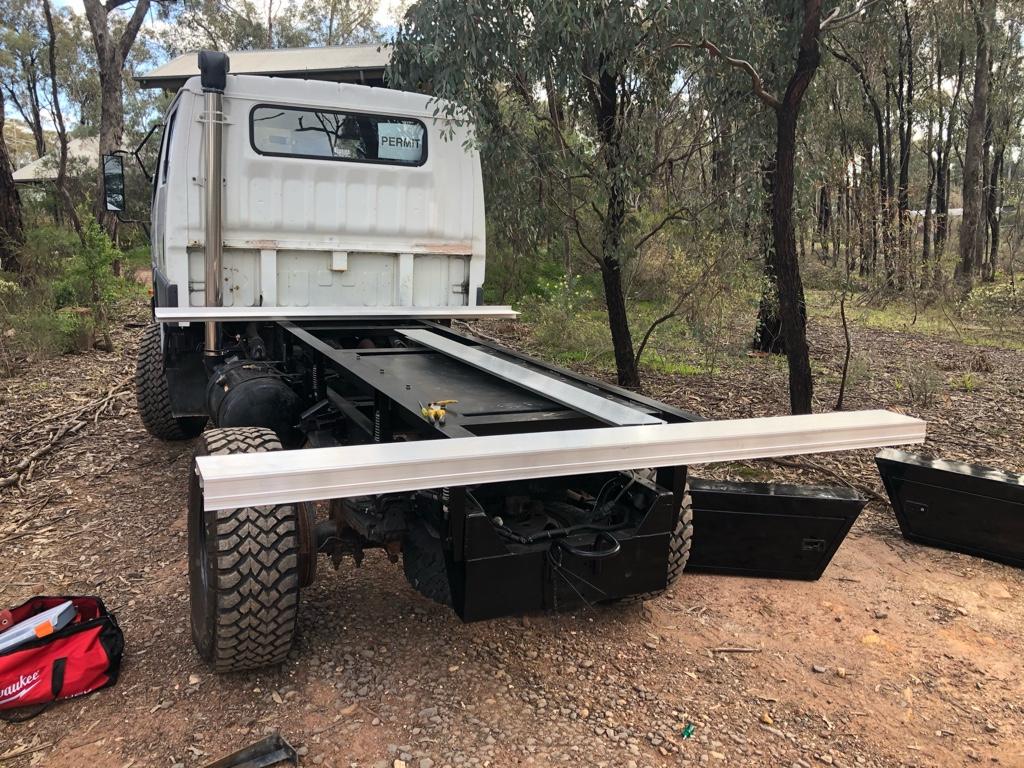 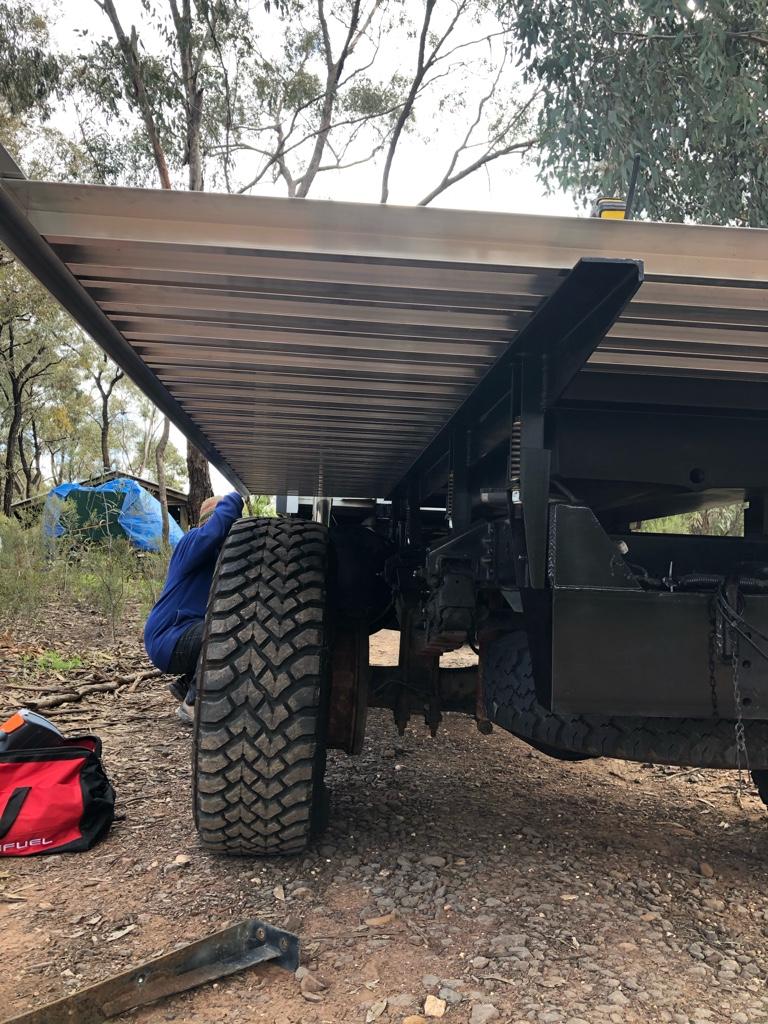 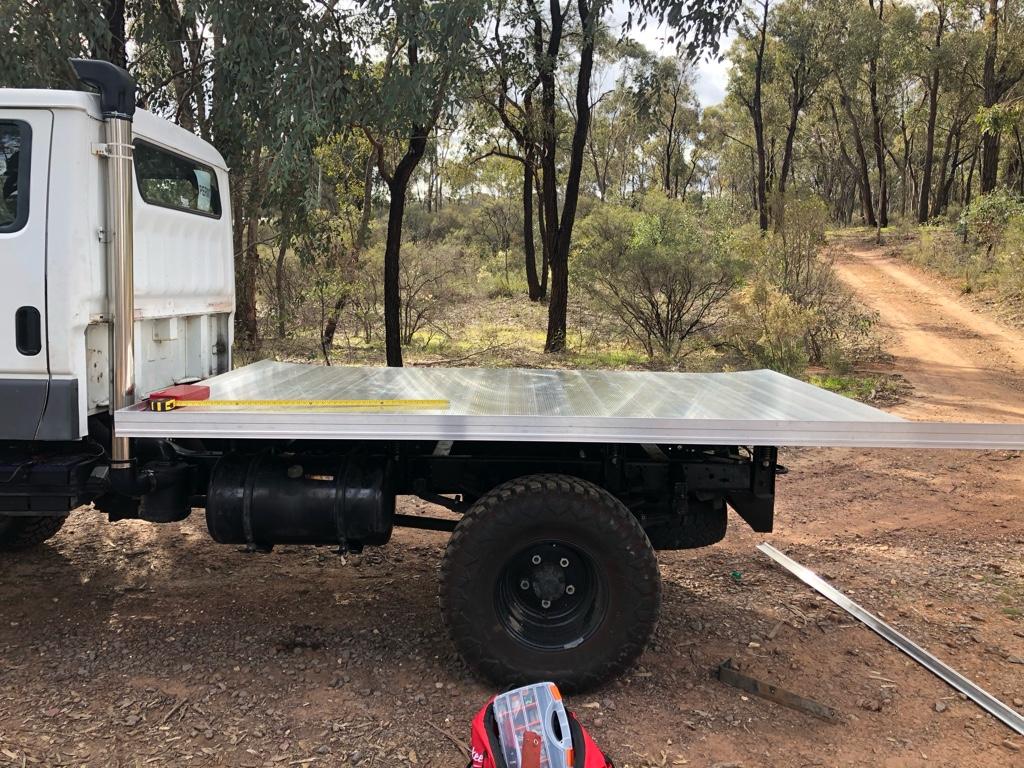 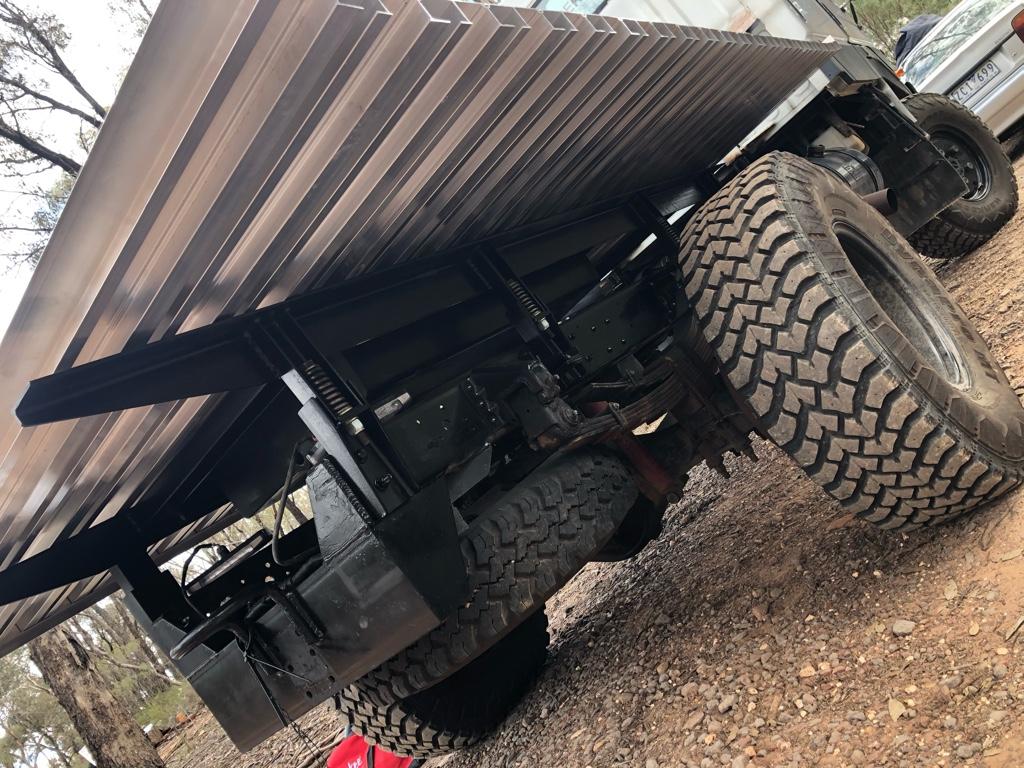 Starting to look this this is going to work!

@Lachstock Thanks for sharing your build with us - I'm following with interest; I have a steel tray bolted straight on my FG (no kinetic subframe), which is probably going to compromise flex and suspension travel. So I'm toying with following your example. Would be interested in what your build cost turns out to be, and how difficult/easy it is - You've made it look easy so far. Keep posting please
L

GrantBerry said:
@Lachstock Thanks for sharing your build with us - I'm following with interest; I have a steel tray bolted straight on my FG (no kinetic subframe), which is probably going to compromise flex and suspension travel. So I'm toying with following your example. Would be interested in what your build cost turns out to be, and how difficult/easy it is - You've made it look easy so far. Keep posting please
Click to expand...

It’s been a pretty straight forward build so far, but I’d say mainly because of doing a tonne of planning! Have gleaned a lot from the forums here that’s for sure. I’m trying to do it on the cheap where possible, I’ve spent a lot of time hunting down suppliers for different bits and pieces instead of buying the finished off the shelf complete products. Tray build is going to come in at around $3000 AUD I reckon. Probably a bit more with fasteners and everything.

I was quoted $3500 for a new subframe and anywhere from $3000 to $6000 for an aluminium tray which was well outside my budget. So far it’s been reasonably easy, but as I said, I’ve had a lot of time to model it and plan it out so it was conceptually mostly finished before I started!