Jason911 said:
Aww hell! Wish I'd known you were here in WI. Would've loved to see the rig in person. Maybe next time you venture back to da' Nortwoods.
Click to expand...

Where are you up there?
We will be back, this summer for sure but unclear if we are driving or flying up.

I love it up there but that cold is brutal!

Ray_G said:
Where are you up there?
We will be back, this summer for sure but unclear if we are driving or flying up.

I love it up there but that cold is brutal!

I'm in between Marengo and Mason, very near Wildcat Road. I could take you up to the now-defunct USFS lookout tower for a great-almost-drone-like-view. 50/50 chance the access road might be impassible, even for the Landie.

And its been colder. A lot colder. Three years ago Lake Superior was 94% frozen over.

Jason911 said:
I'm in between Marengo and Mason, very near Wildcat Road. I could take you up to the now-defunct USFS lookout tower for a great-almost-drone-like-view. 50/50 chance the access road might be impassible, even for the Landie.

And its been colder. A lot colder. Three years ago Lake Superior was 94% frozen over.
Click to expand...

I will hit you up if we get back up there this year in the truck for sure-you are a bit away from where the wife grew up but that's a very relative thing up there it would seem. (everywhere is a bit away from most places).

I was rather sad that it was too early in the freeze to drive across the Bayfield.
J

Ray_G said:
I will hit you up if we get back up there this year in the truck for sure-you are a bit away from where the wife grew up but that's a very relative thing up there it would seem. (everywhere is a bit away from most places).

I was rather sad that it was too early in the freeze to drive across the Bayfield.
Click to expand...

Everything is a distance to be sure. Barely enough ice to do anything. Ice caves are quite nice, but kinda bum'd the park service started charging(revenue) for something that happens in nature and was free until 2 years ago. In any regards - love reading your postings!

Home, more/less recovered, so figured I'd add some content, more pics, and some thoughts from the trip. Most of the stuff thus far was posted off my phone as it happened. Here's 'the rest of the story' (or something like it).

In terms of substance about the truck not too much to say. Things that worked well:
-replaced the battery just before departure after noticing it was from 2014. Got the Autozone duralast platinum b/c it was easiest to get the night I realized I needed to do it but had minimal time to go find the Interstate dealer, etc. I also don't mind the Duralast and like their warranty/availability. Very glad I did that.
-Refilled the washer fluid at the last oil change. Neglected to change the wipers. Fail. In fact on day 2, somewhere in WI, the rear wiper just ejected.
-BFG KO2's; phenomenal tires. Truly.
-Coil springs = total peace of mind in that department, no matter what the warning chimes and other anger my tropically conditioned truck. Ride was excellent.
-Backup LED's on the roof rack; worked well.

Kinetic rope was moved from the cargo area to the floorboard area between 2nd and 3rd rows to make more space for stuff. This, in conjunction with the consolidation done to move stuff up to the BROG panels, worked very well. Proved its merit when I helped get the family ATV out from behind the garage in -11 temps. Winch controller, soft shackle, etc were all easy to locate. Tree saver served well as a short tow strap for the haul down to the Fire Hall.

Sirius/XM. Clutch. I know this isn't a shot of the radio, rather it is the brain add on for the KOS tucked under the center console forward of the fridge. I also added in charging cords for the kiddos kindle(s) and iproduct(s)-also very useful for the journey.

As evidenced here as the road warrior's read through miles and miles (when they weren't asleep). Fridge mounted in the 30 section continues to be worth its weight in gold as well. Makes drink/snack access easy, serves as a child dividing barrier to give everyone some personal space, shelf for stuff, etc.

One lesson learned is North Face means it when they say these duffels are highly water resistant...not waterproof. Note to users, protracted freeze/thaw exposure-at high speed-will allow water to enter in the seams. I may seam seal it to see if that alleviates the issue, but suffice it to say there was a chorus of dismay when we got to the cabin to discover the snow clothes were literally frozen.

Just before departure I'd taken some time to put grip tape on the sliders after noticing that-when wet-they were slick. That turned out to be a very good move since the tape did allow for some purchase as boots stepped up and down through the snow and ice.

Did I mention we almost got to employ some Wilderness First Aid? Came around the corner during some snow the day after Xmas and saw a vehicle in the ditch...told the wife to call her mom (i.e. the village administrator, member of the VFD, etc) and the authorities, popped on the hazards and went over to see what was what. Victim was moving around, had unbuckled himself already so there was no 'I am concerned about your head, don't move' b/c of the positive MOI. Old boy wanted out but couldn't get his door open vertically, didn't want to kick out the front glass (if he even could), etc.

So we facilitated that since responder's were going to be a considerable period given time/distance. No use of any of the stuff from the truck, just the wife holding the door open-me helping him out and the eldest directing traffic (and taking pics). Appears he was moving at perhaps too high a rate of speed for his vehicle in the conditions (fresh snow on a frozen road) and likely locked up, spun around, and once he hit the ditch it was all over. That said he was really none the worse for wear other than being rather shook up.

With the FIL also serving as village handyman, and such later in the week I got a chance to play in the Village's brand new plow truck. Talk about a cool piece of equipment, cummins diesel with both front and wing plows as well as a computerized spreader...

Suffice it to say it was a treat to drive it-and I didn't knock over any mailboxes, hit parked cars, etc

Wife got me this for Xmas. Could easily read 13mm of course, but the point is the same-a great shirt to wrench in:

This pretty much sums it up, we went for a run on Xmas after opening presents and before dinner. It was ~ -20...thus the eyelashes and such got some nice freezing action. Still, was a great trip...but I wish I had a block heater!

While I can imagine it would get boring and/or annoying after a while.

I would love that amount of snow. We haven't had decent snow here since 2010 and I miss it.

xray132 said:
This is a Gun Vault Nano 100. This works for the short trip into a federal building, because at most any other time it should be on your side with an extra magazine. That's a Glock 21C with extra mag. inside. The console was lifted out and it is bolted to the inside back side of console.
Click to expand...

I wonder if they changed the middle console from the 2005 to 2006, or if they changed the GunVault Nano 100, as the one I purchased does not fit in my 2006 middle console pocket. It leaves 3 inches behind the vault at the bottom to get it to fit at all. And I didn't test fit before I started tearing it apart, and I can't get the accordion thing around the gear shift to clip back into the other trim piece.

Truck is going great and just a few hundred miles off 130k. Some changes coming up this summer but for now, shots of it out being used as a utility vehicle.

The pink bunny suit, now worn by the youngest (it really is quite warm) 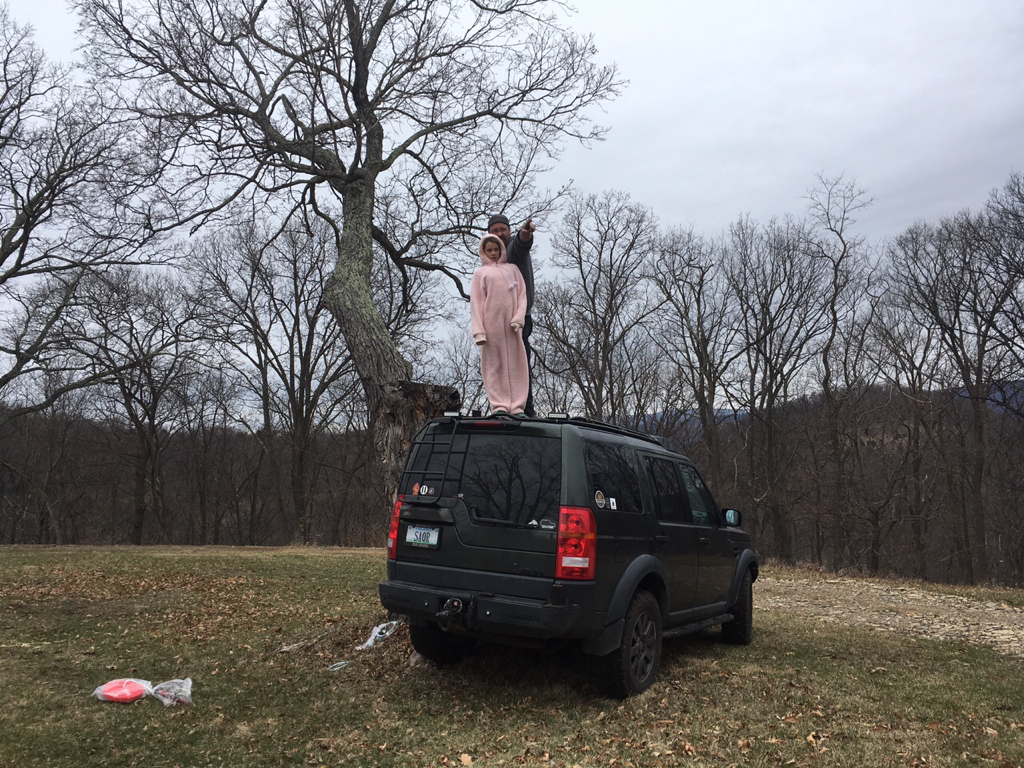 Useful platform for putting up a zip line. 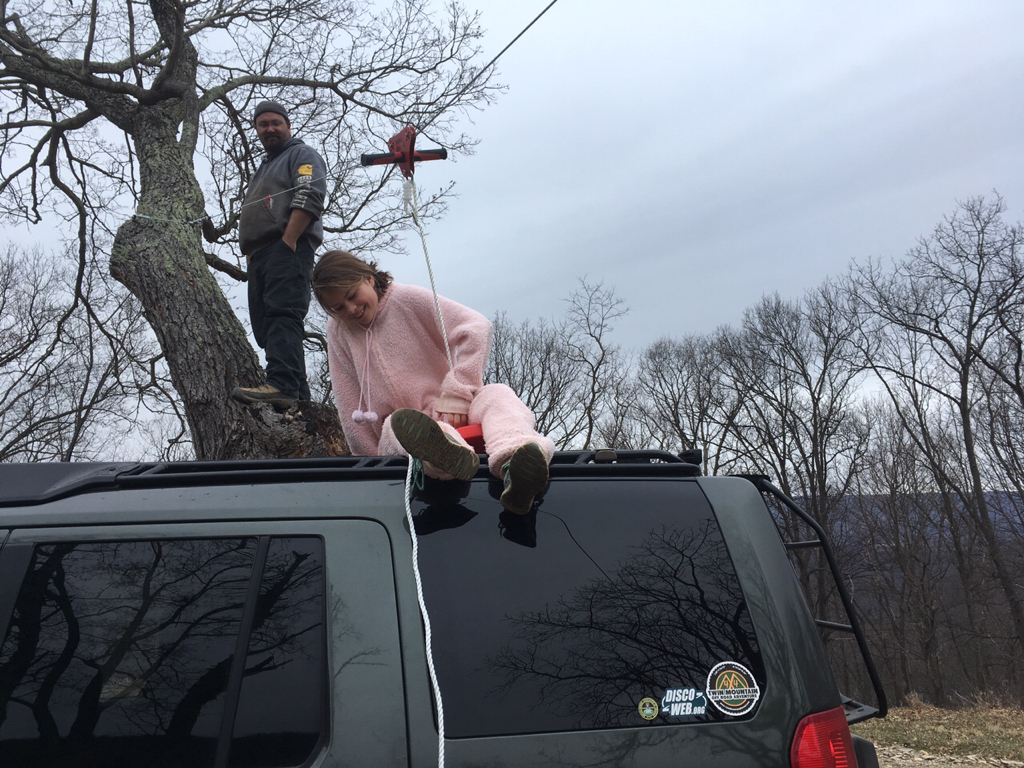 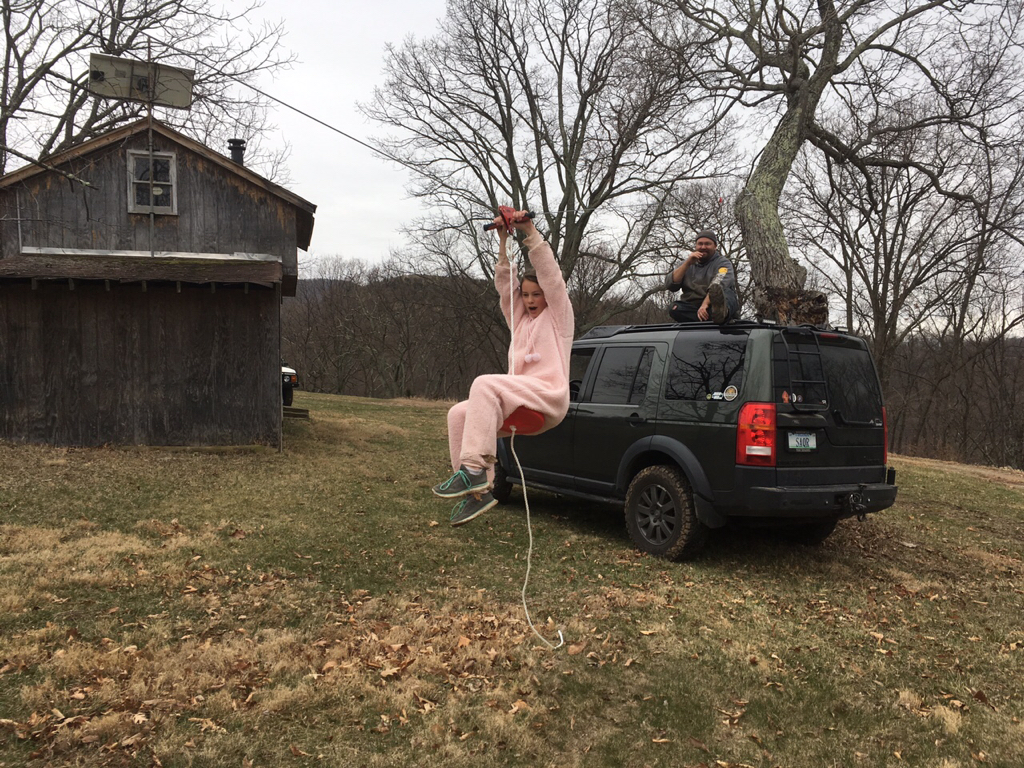 & taking selfies as others work. 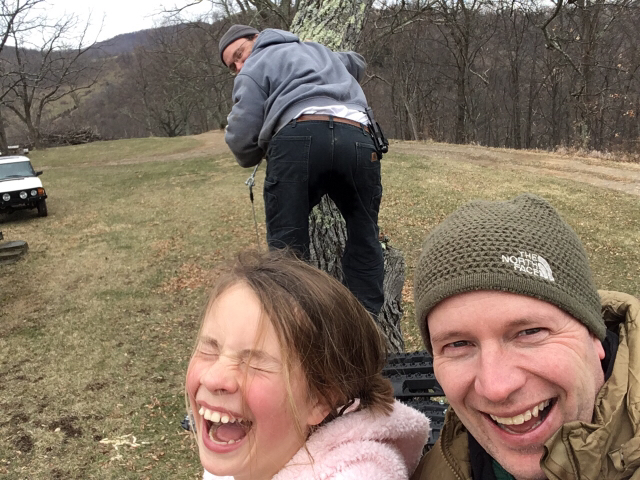 Other Rover shots fm the weekend: 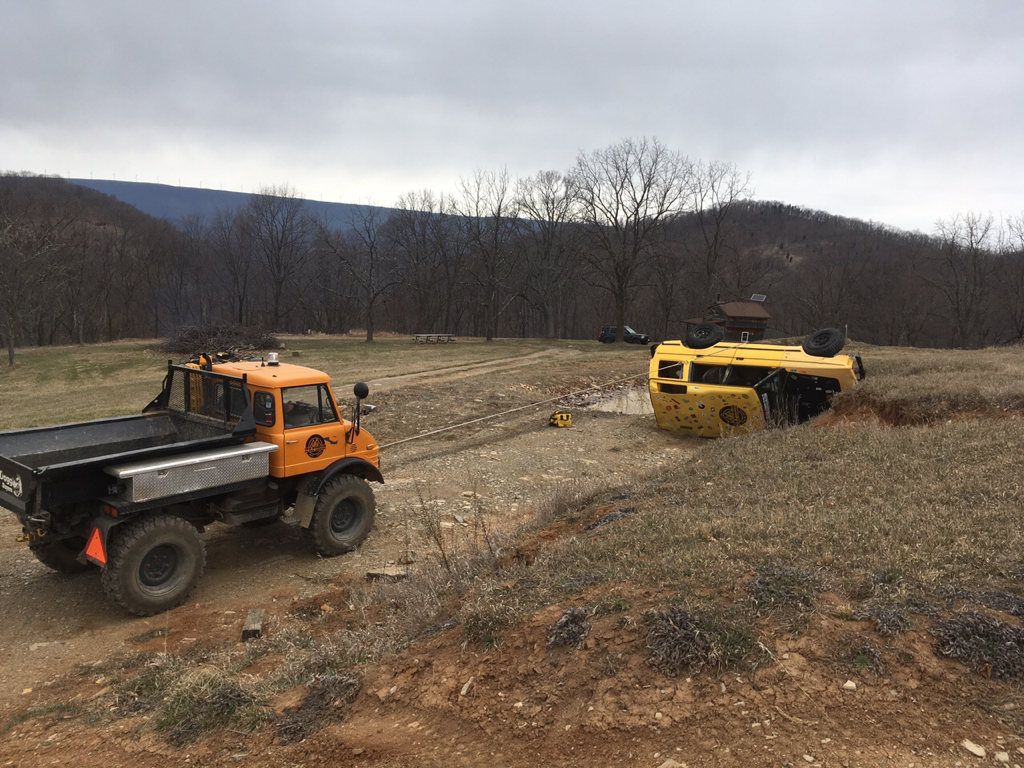 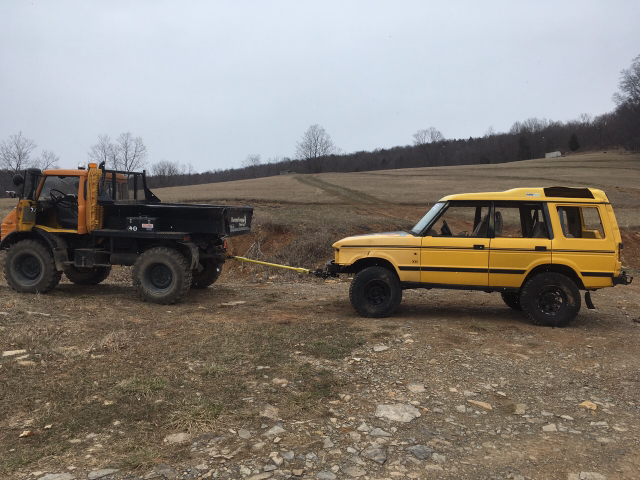 More to follow, rear seats may be coming out for a platform build...and a hard shell RTT looms in the future too.
R-
R

Damn Germans, always beating up on the Brits....

I owe an update to this in the next few weeks, wrapping up a few things but a few pics: 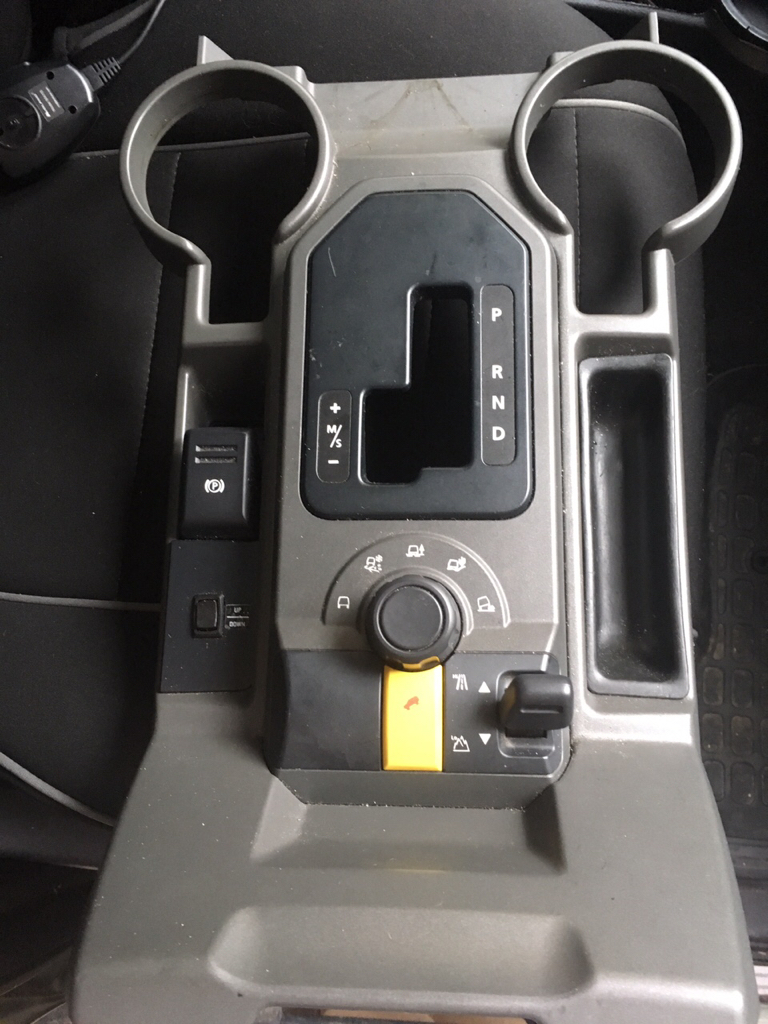 Close attention to the switch area near the terrain response will highlight what is new, and likely fairly unique to this truck. (I had to modify the base spec non-EAS plate to fit with the TR knob) 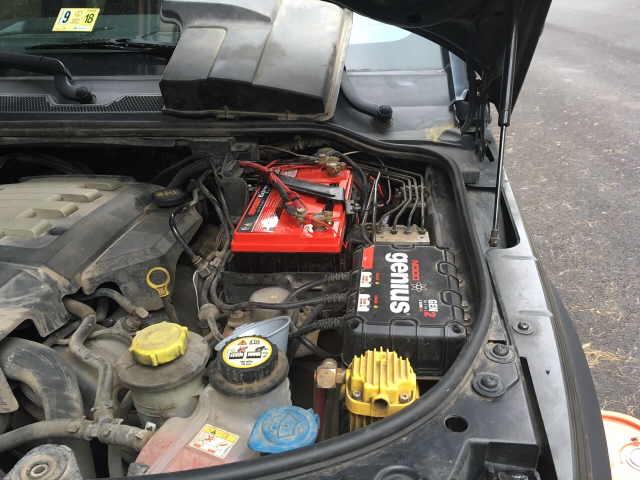 Yellow top lasted longer than I expected, but wasn't going to make this summer...

No to LLAMS; with the coils in place I have no requirement for that. If you look closely you'll note the EAS control is removed from the left side-it's a blank plate (i.e. A great guy in AUS that had access to a breaker who had a coiler found that little obscure piece and mailed it to me). The up/down switch behind the parking brake is for the diamond motorized antenna mount.
Z