I am currently in the process of building out a M1102 military humvee trailer. I know it's a bit big and heavy but I'm a huge sucker for military equipment. I grew up on military bases and now have two sons serving, This thing is built like a tank and exactly what I was looking for.

The plan was to get it street legal, put a bed rack on it and slap a tent on top of it. We figured once we had that done we could start taking it out and then decide from there where to take it.

I had been casually looking around for one on Facebook, craigslist and other online locations. I also considered bidding on one at auction but the ones near by were trashed and the others would have required some serious driving to pickup. While traveling to one of our remote locations for work I happened across one at a local used car dealership. It was about 35 miles from home so I decided to check it out. I asked a few questions but ultimately decided they were asking more than I wanted to pay. A couple days late my wife and I happened to be in the are for dinner so we drove by so she could have a look. We discussed it a bit and decided that if they'd take what we were willing to pay we'd pick it up. I stopped back in the next day and they took my offer. It's in great shape, close to home and in budget. I grabbed some cash from the bank, picked up a pintle hitch for my truck (2019 Tundra TRD Offroad Crewmax) and went to take it home.

There's not a whole lot I had to do to make it street legal. I picked up some 12v red LED tail bulbs, cut off the military wiring connector and crawled under it with my voltage meter. I identified what was what and wired in a 7 blade connector. I had to extend the chains a bit and added a 7 bade extension to get everything to mate up.

While going through the registration process we went to work on the bed rack. Originally I was going to buy something already made but I couldn't find anything that would fit. I then tried to buy parts and pieces of other racks and quickly found out I was going to need to do a bunch of fabrication to get that to work. Ultimately we decided we would just make our own. I've never welded, didn't have any of the tools but we wanted to give it a go. Originally I was going to use steel tubing but the trailer is already heavy so I decided to go aluminum. The fabricator at work warned me that welding aluminum would be difficult especially with me being a complete noob. But I was determined. I was given a bunch of scrap to play with and I quickly found just how hard it was. I kept at it though and I'm now making some decent welds.

My wife being a math major went to work figuring out the angles, lengths etc. We ordered a pile of aluminum and went to work. Not having a flat table to weld on and finding my horizontal band saw was not making straight cuts lead to a bunch of wasted aluminum. We got that all sorted out and ended up with a good looking bed rack. It's not complete yet but should have fabrication done by the end of next week. We were able to get enough done to mount the tent.

I did a ton of research on tents and decided on the iKamper Skycamp 3.0 with annex plus. My wife and I were able to crawl into a bunch of tents at Overland Expo Mtn West and confirmed the iKamper was what we wanted. After getting it up on the rack we tested it out overnight in the driveway and are very happy with the purchase thus far.

We still have lots of work to do but here is where we're at right now.

Picking up the trailer 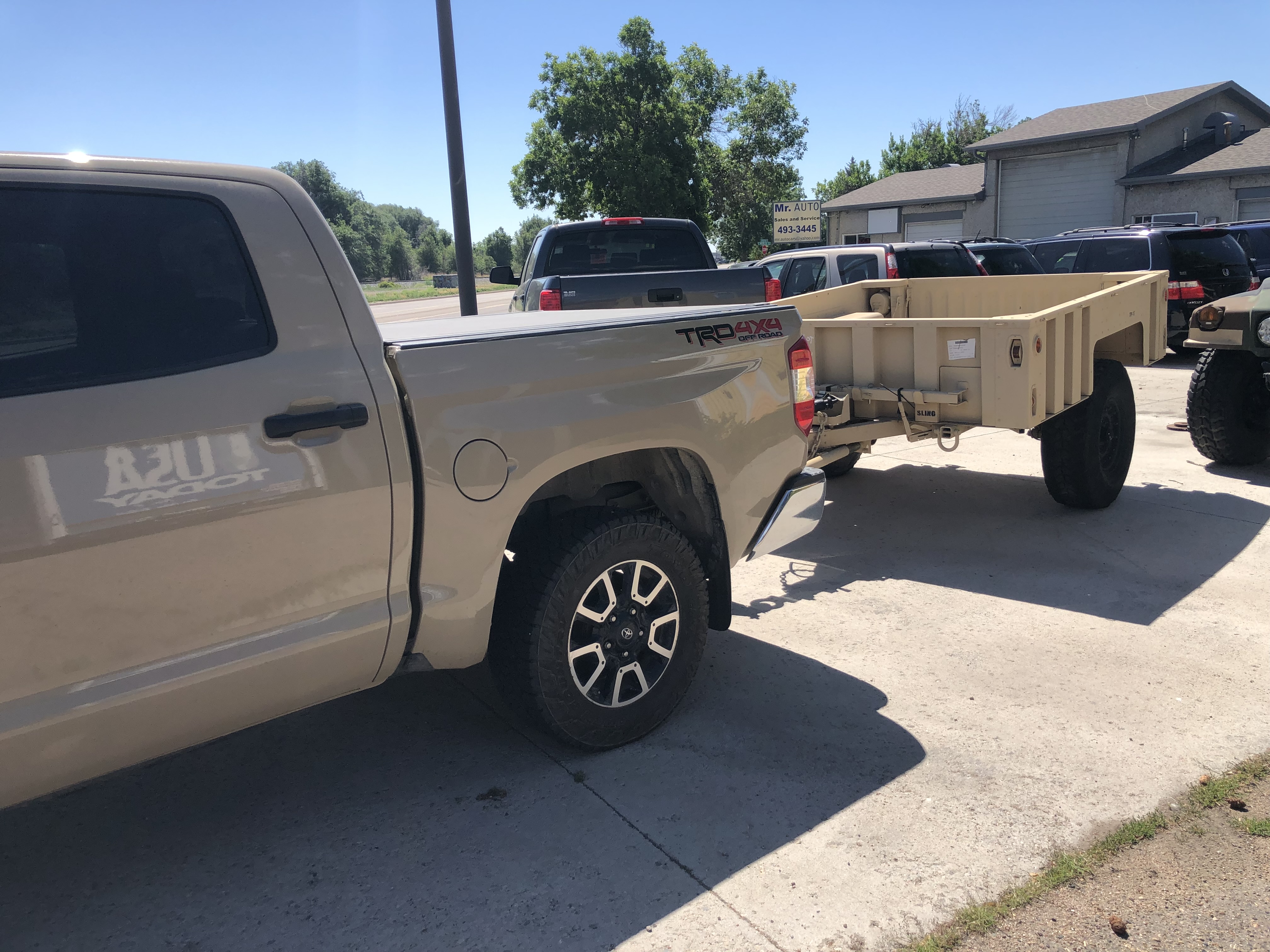 Testing the lights and my wiring 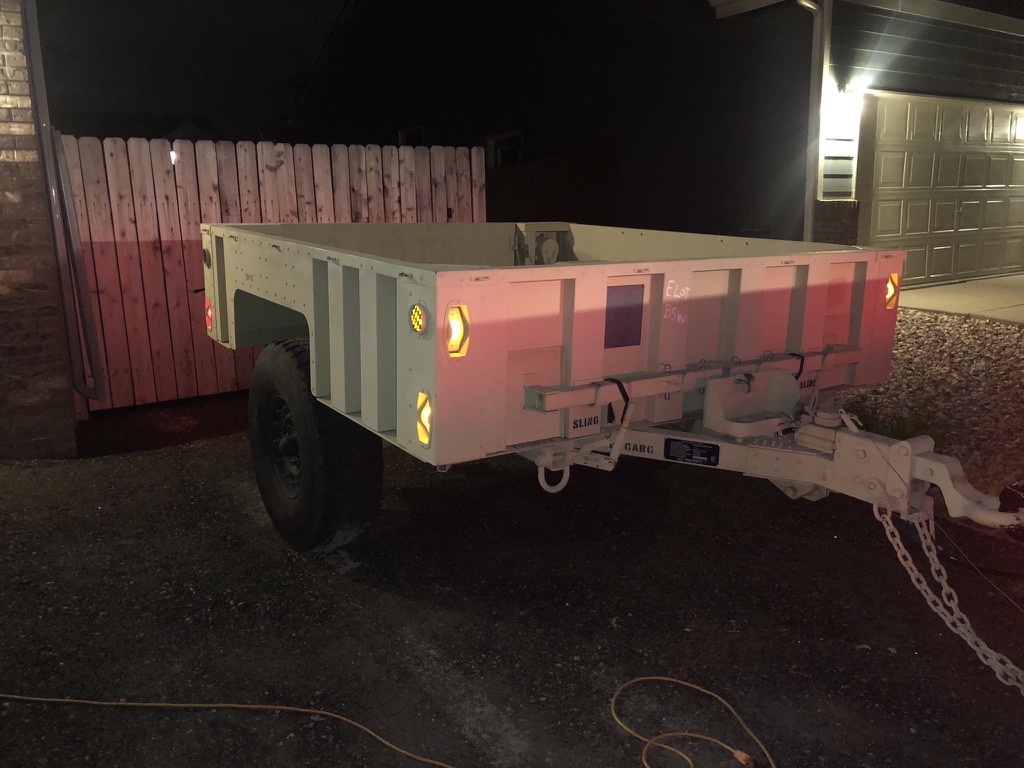 First bed rack legs that were all messed up 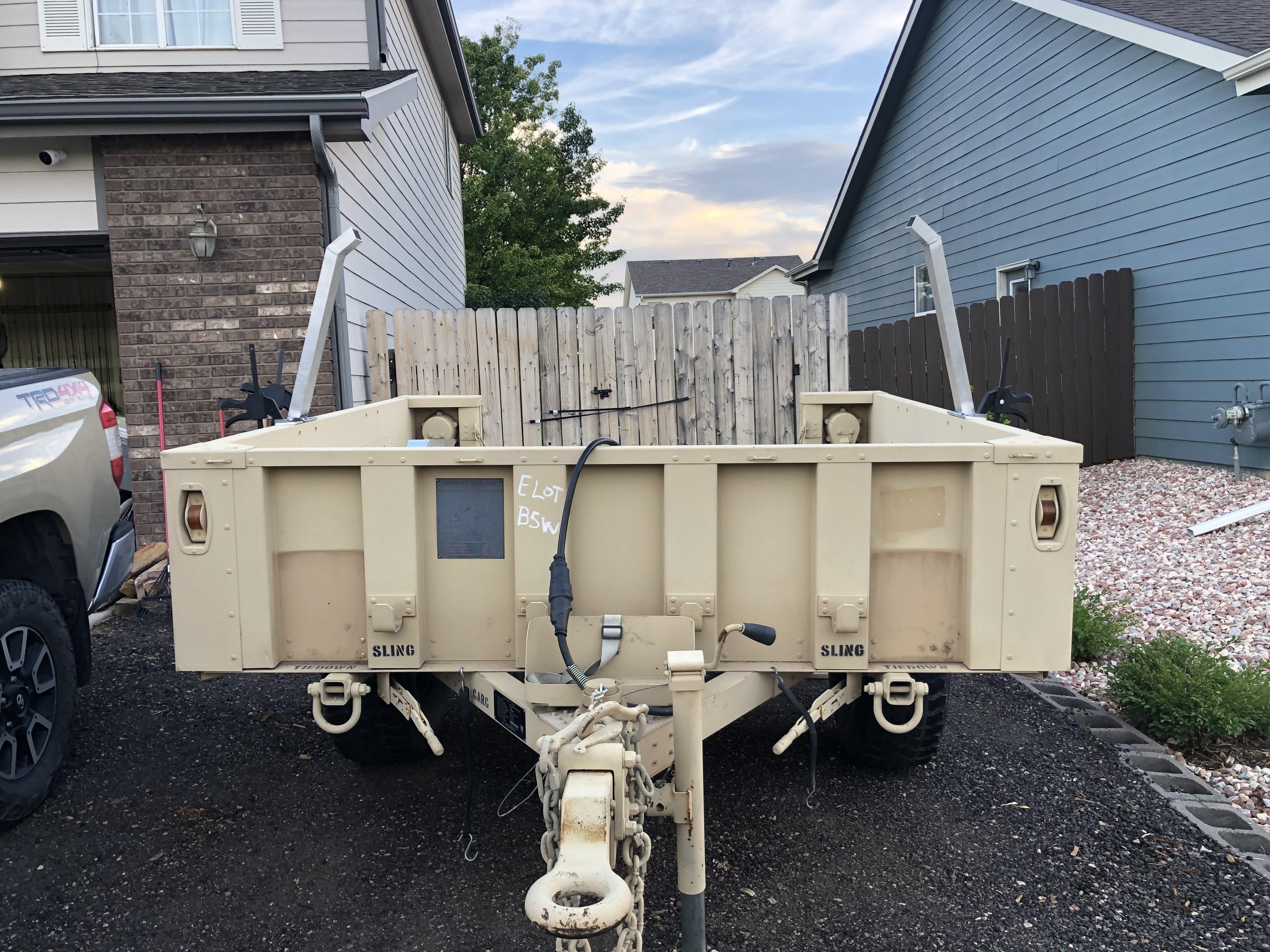 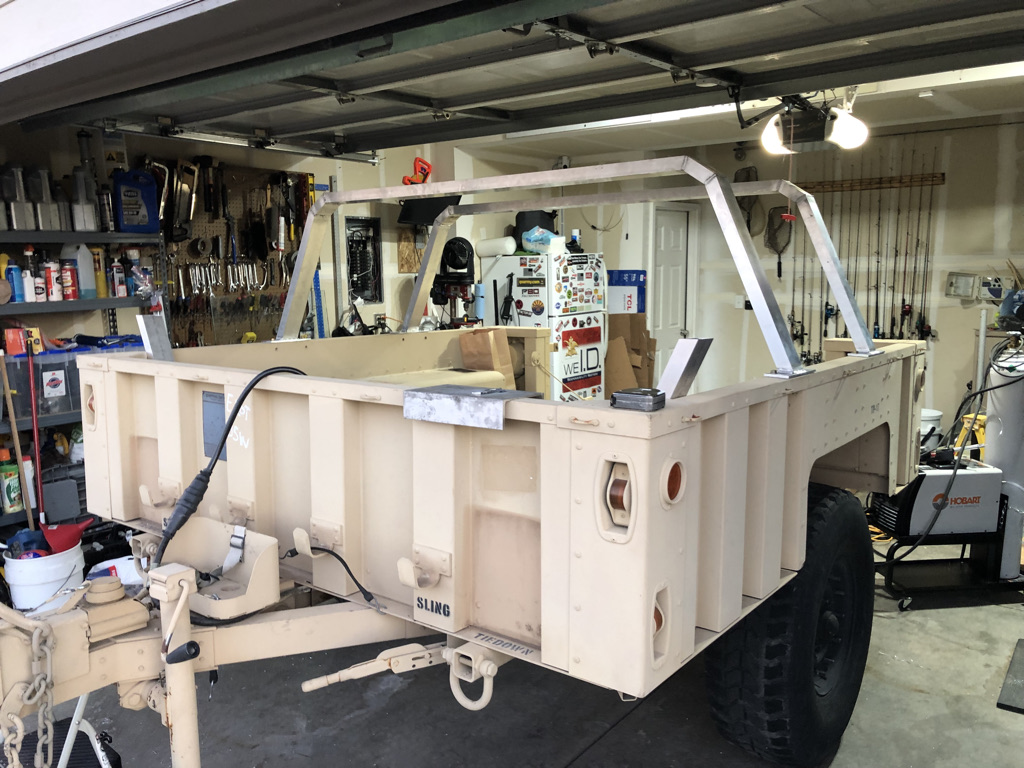 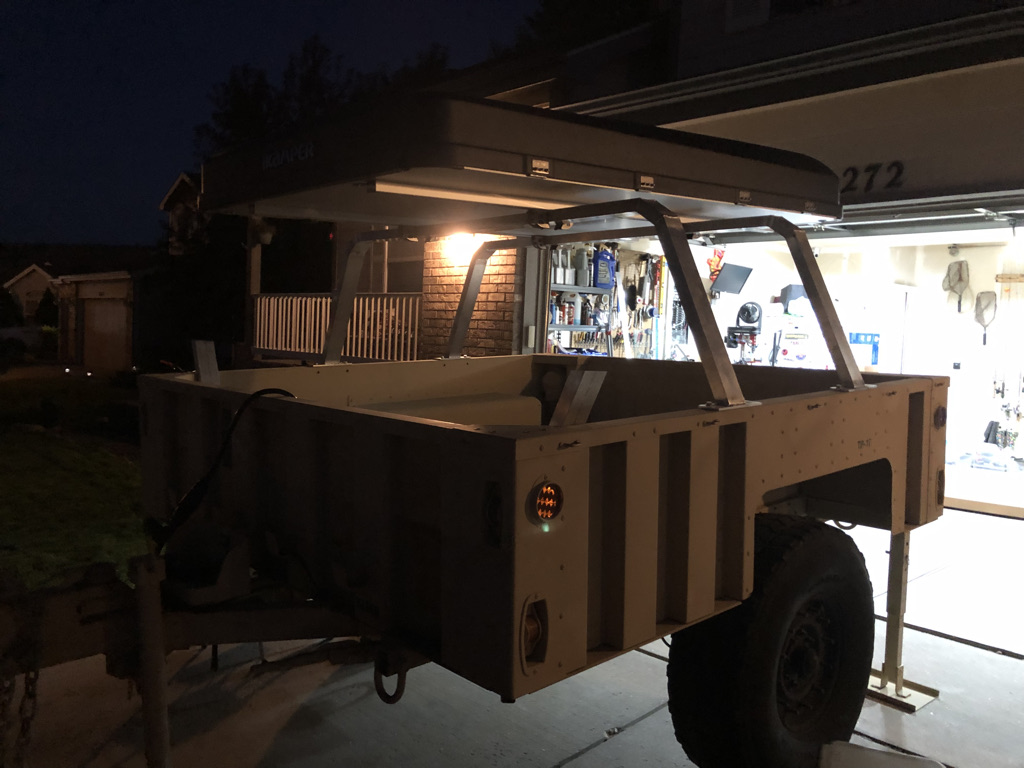 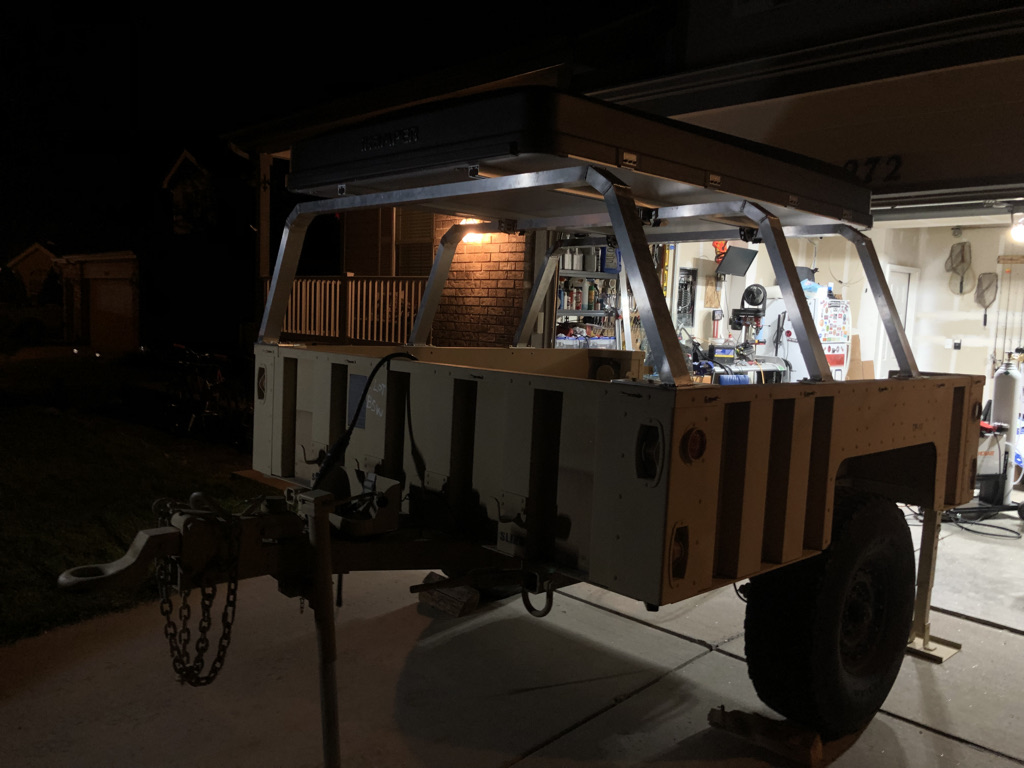 We got a chance to stay in it on Friday night. We ended up with 25-30mpg sustained winds and 50mph gusts. Everything held up fine, including the annex. 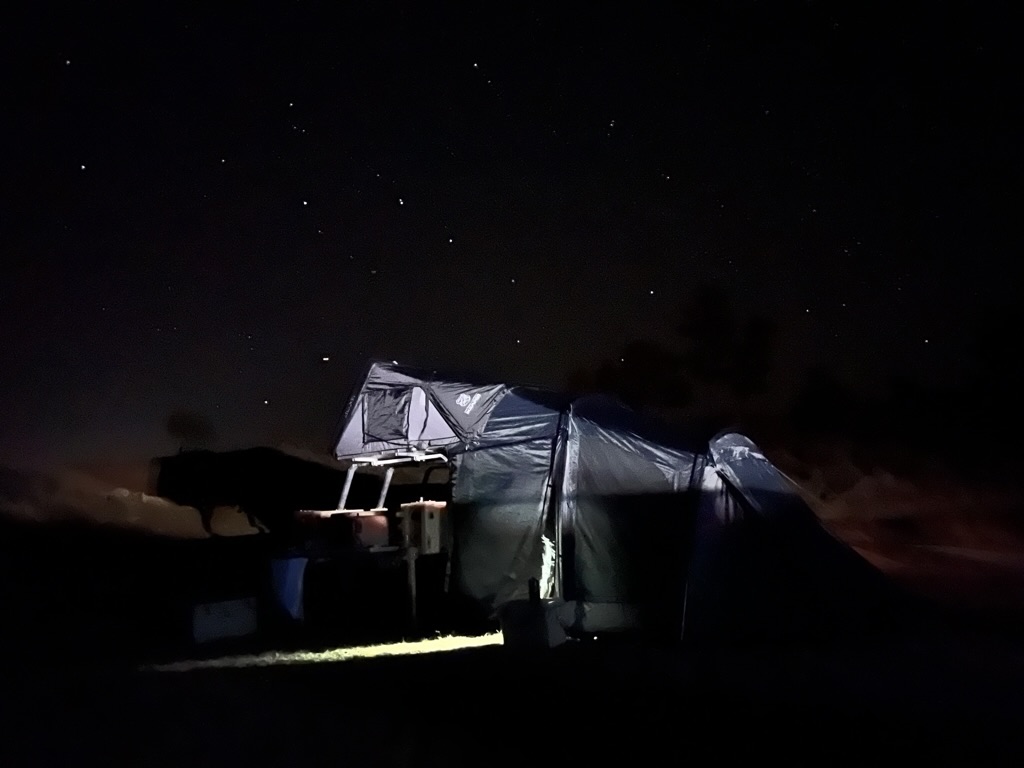 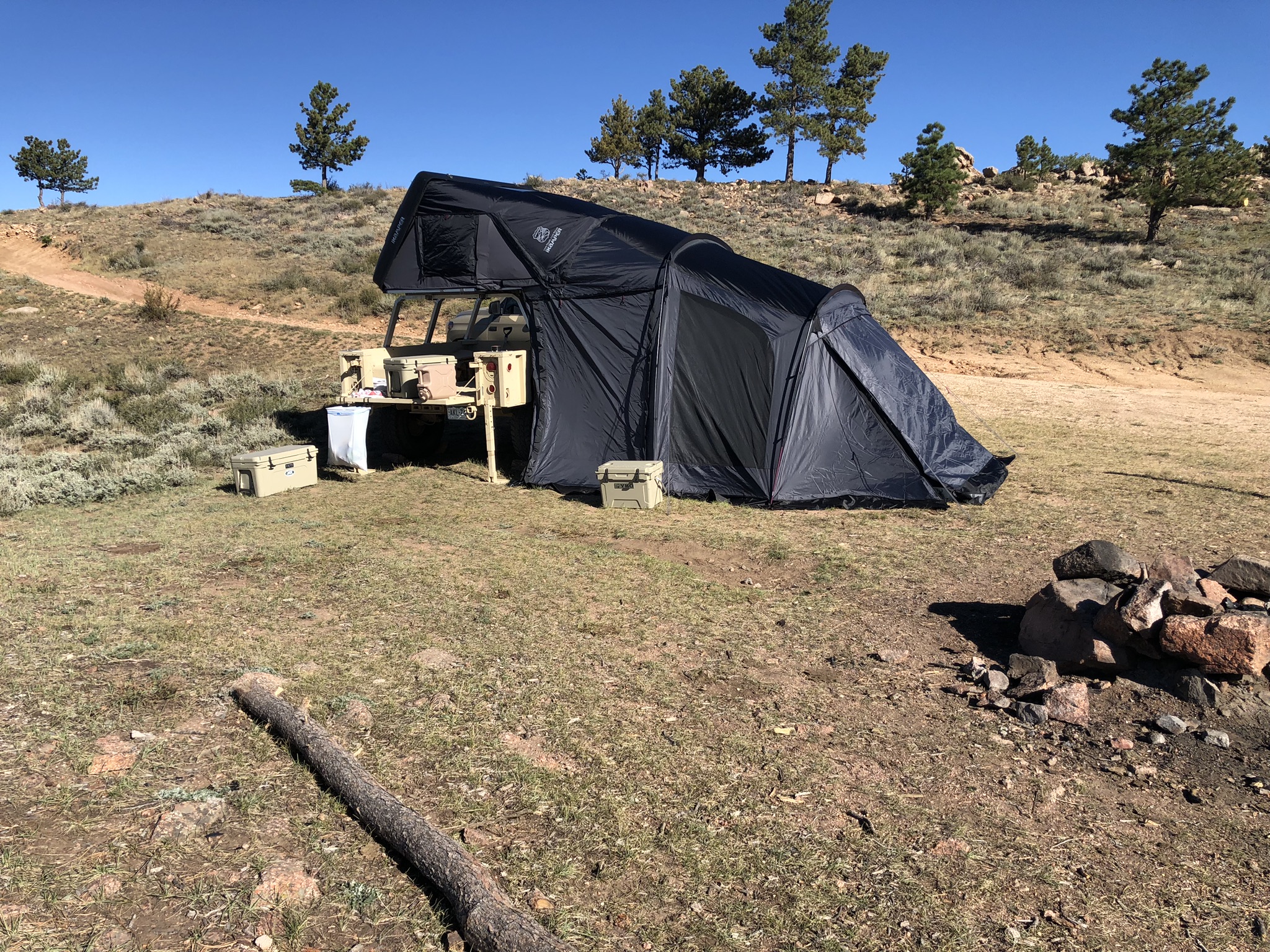 Today I finished up the 4th cross member. Tomorrow I plan on taking it to a couple shops to get quotes on powder coating. 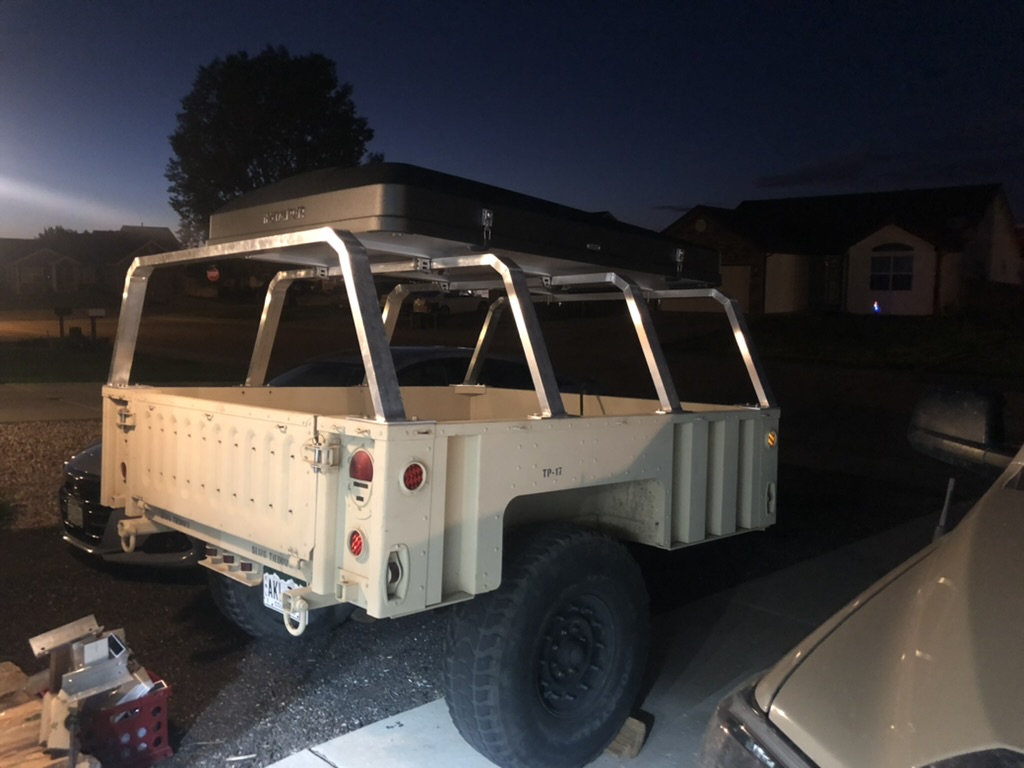 Great build. How much does the stock trailer weigh?
3

max.powerzz said:
Great build. How much does the stock trailer weigh?
Click to expand...