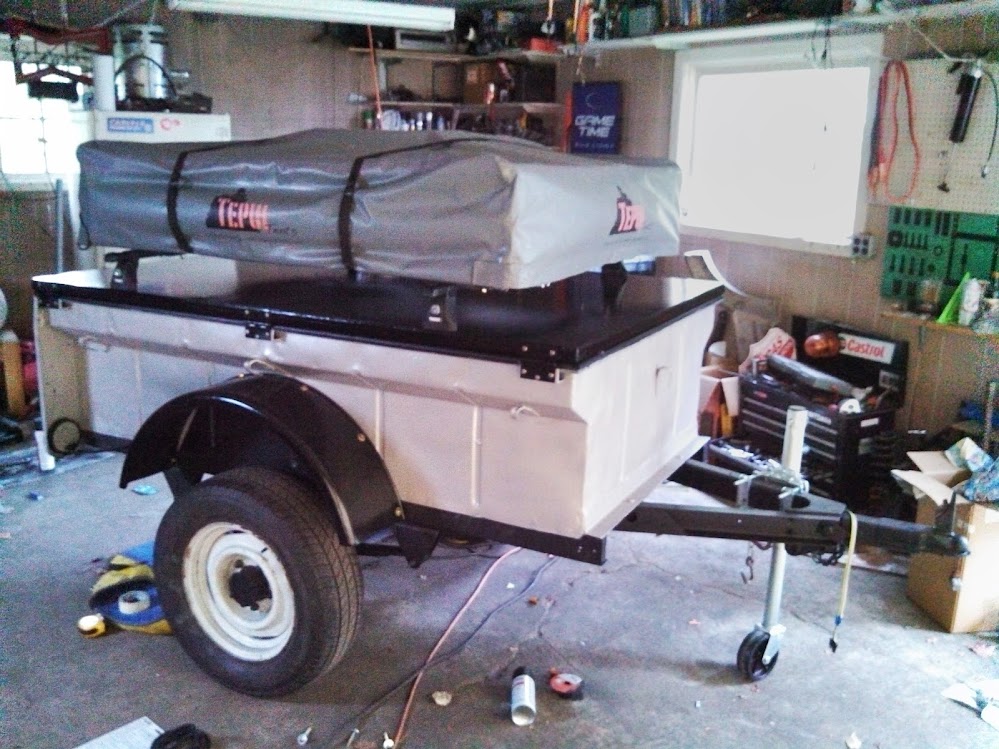 Well after months of searching I found the trailer I wanted to build for expo! It is a 1946 Bantam T3-C. A good friend arrived with it late last night from northern wisconsin. I bought it sight unseen and I am very glad I did because this thing is in great shape for over 60 years in WI. No real rot in the bed and the frame just has a little surface rust. These trailers when they were new were ~$160.00 from the Sears-Roebuck catalog, I paid $700 which is about average for an unrestored article.

I had to try it out right away so I filled it up with my grandmothers broken gazebo and hauled it to the dump! 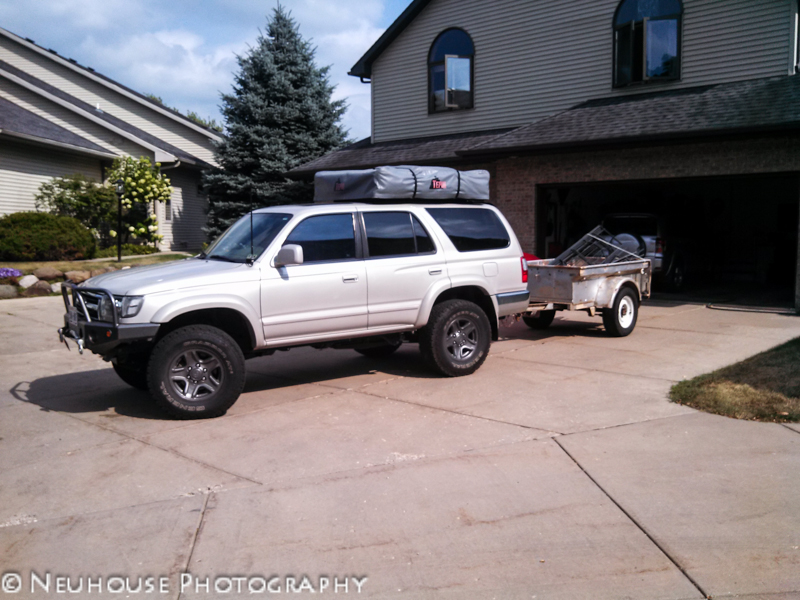 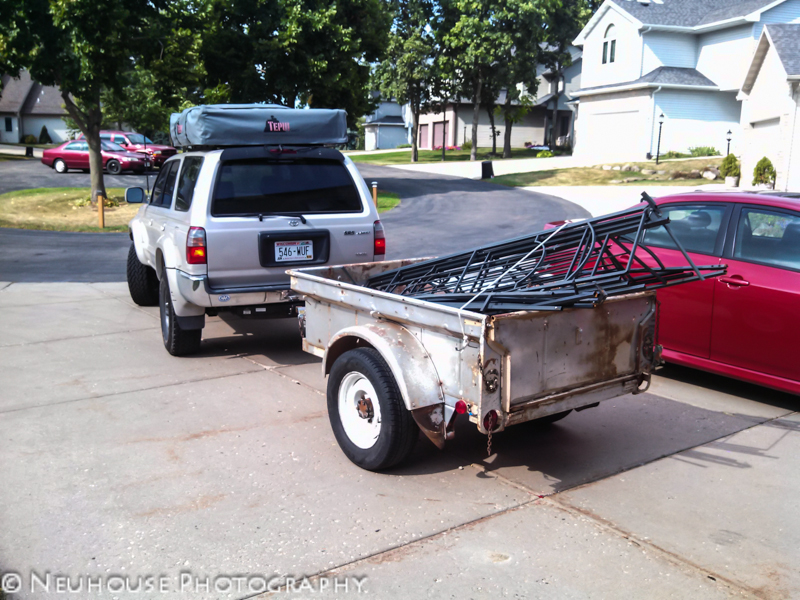 Well after my trip to the dump I found a couple things that needed to be mended straight off. The chains for the tow hooks were far too short and would not reach the loops on the 4Runner so I extended them. 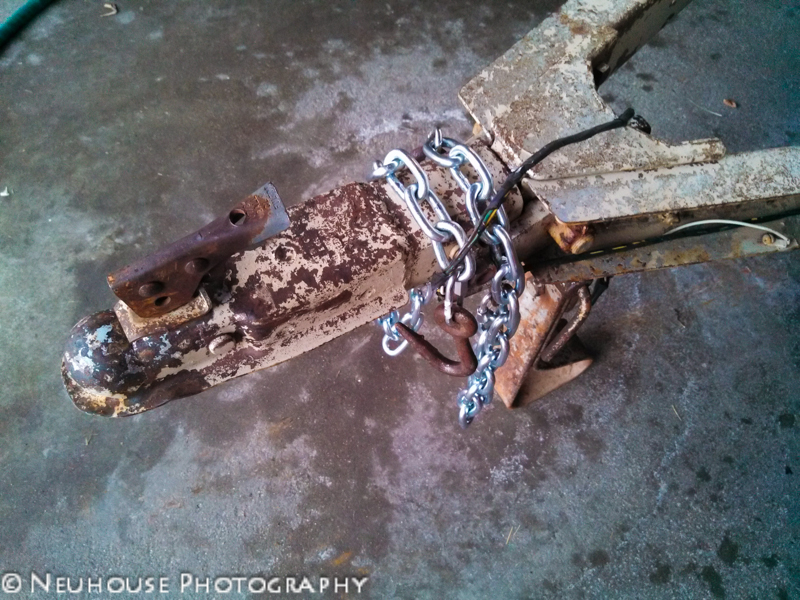 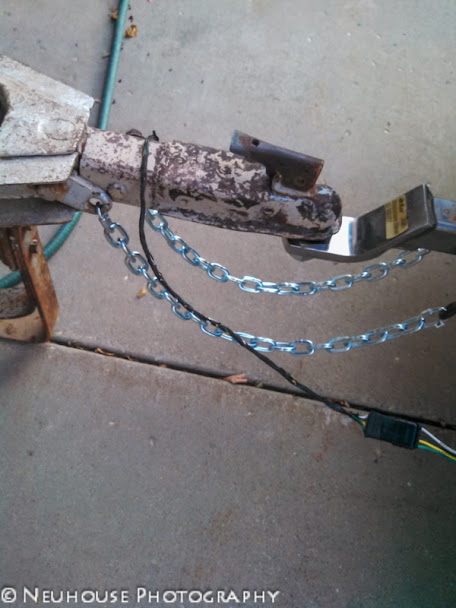 Next I found that the tailgate was bolted shut and a hook was missing on one side. I replaced both the hooks and unbolted it and now its good to go! 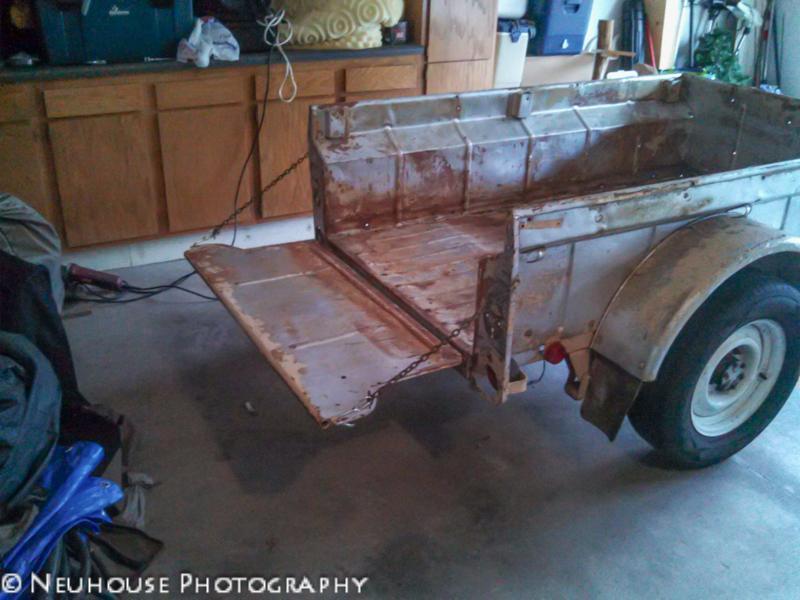 I Also mocked up the 30# propane tank that I picked up for it the other day off of craigslist. I don't know if I want it there or in the bed and have a tongue box with a battery in it. 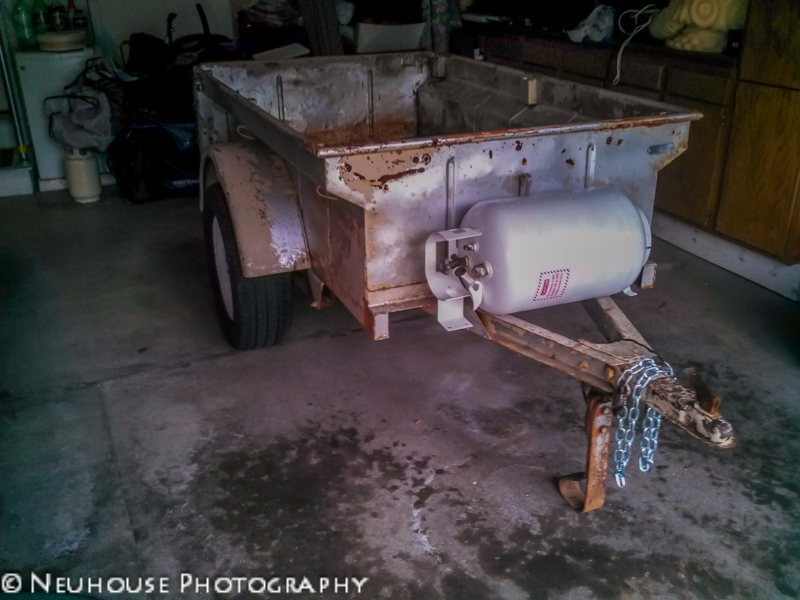 Well it has taken a while, but I finally have the trailer stripped of paint and all of the holes welded shut. I sprayed It down with ospho tonight so tomorrow I will flip it over and do my axle flip and also spray down the bottom. 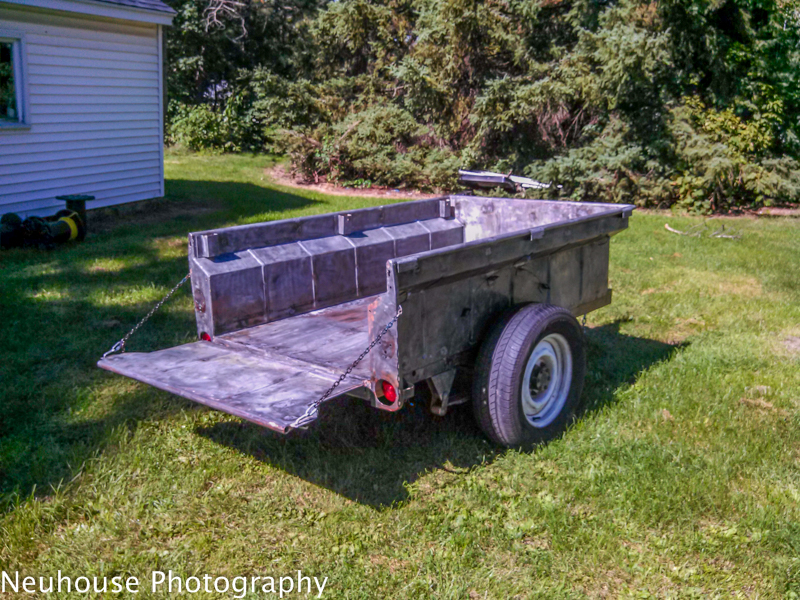 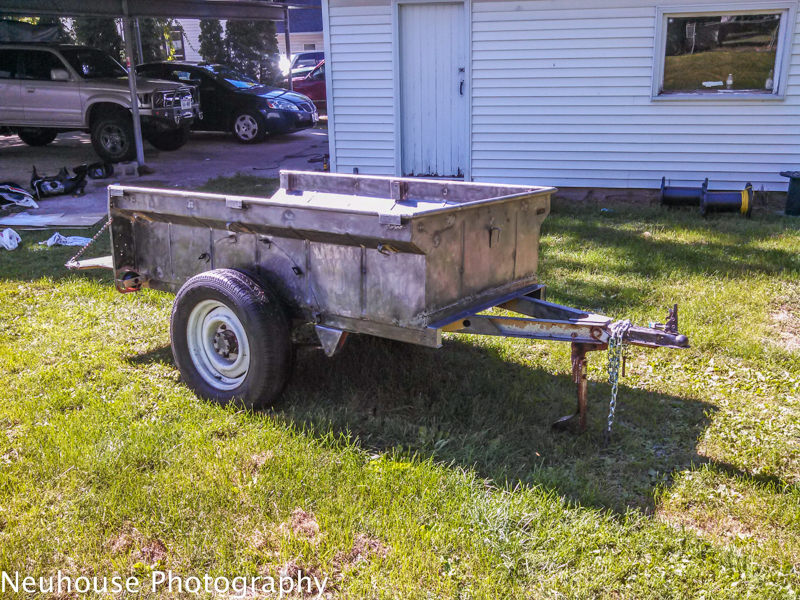 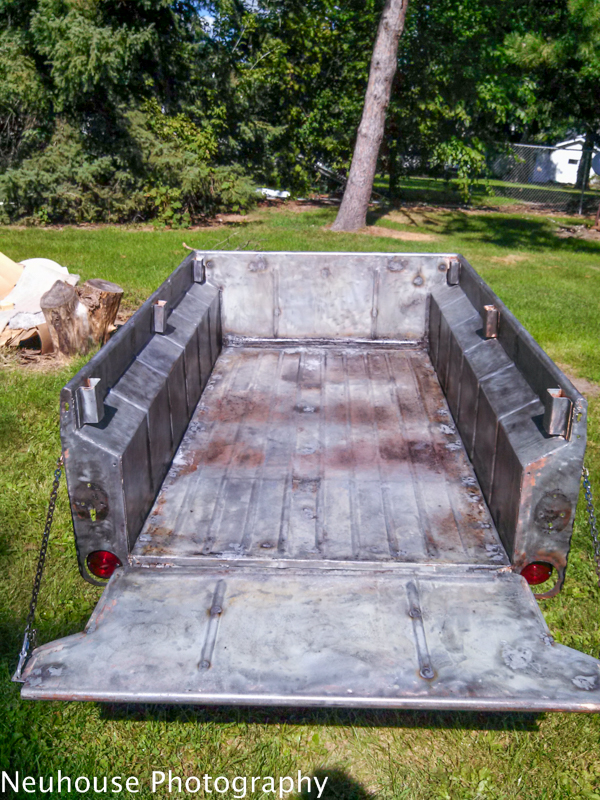 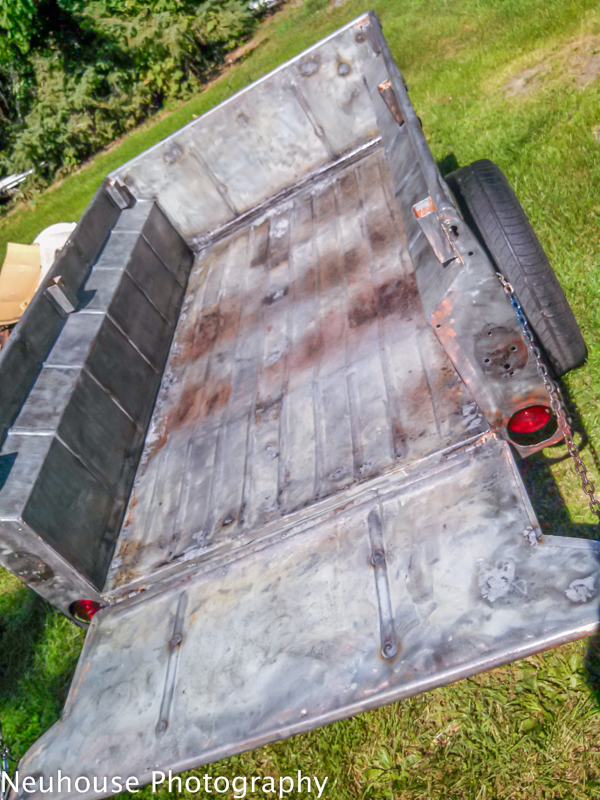 More progress on the trailer today, Axel Flip is done and the entire underside has had POR-15 applied to it 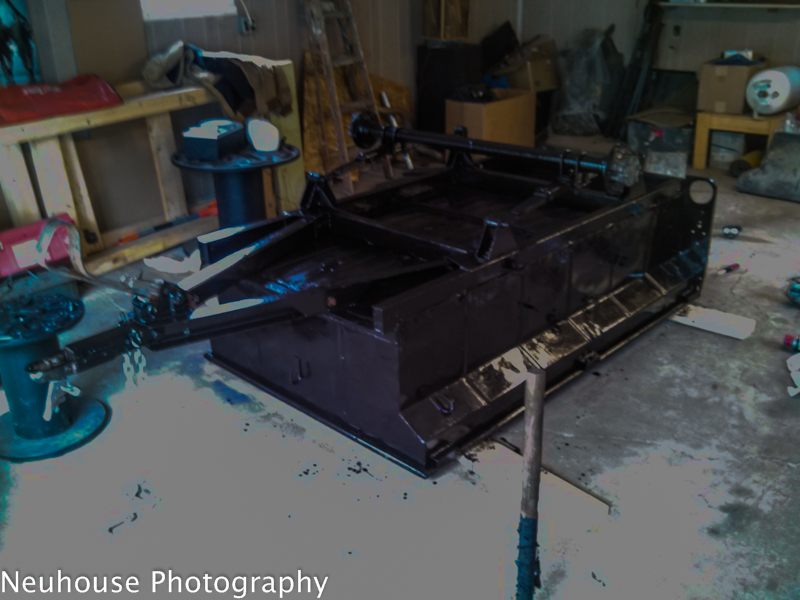 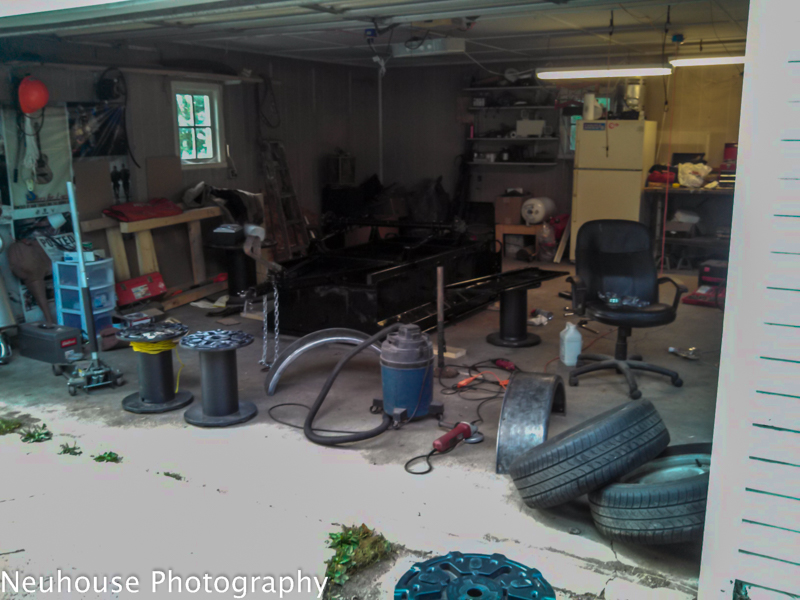 Figured I should get a coat of primer on tonight if I want to get this thing together so I can bring it back to the homestead this weekend. time for 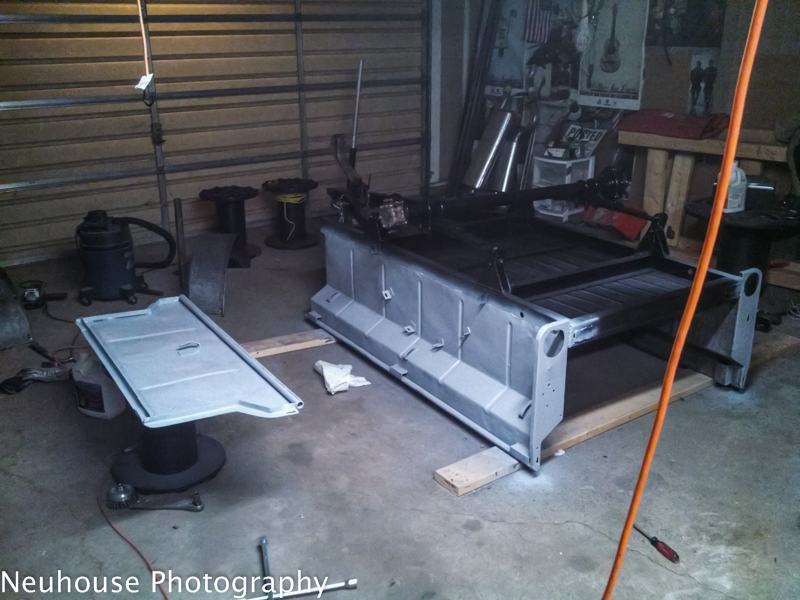 Got the underside all bedlined. This rustoleum bed liner works great and looks good. Time will tell on how durable it is, but I am happy for now. Only thing I noticed is that you need about 3 times as much as you think you would need to get everything coated. 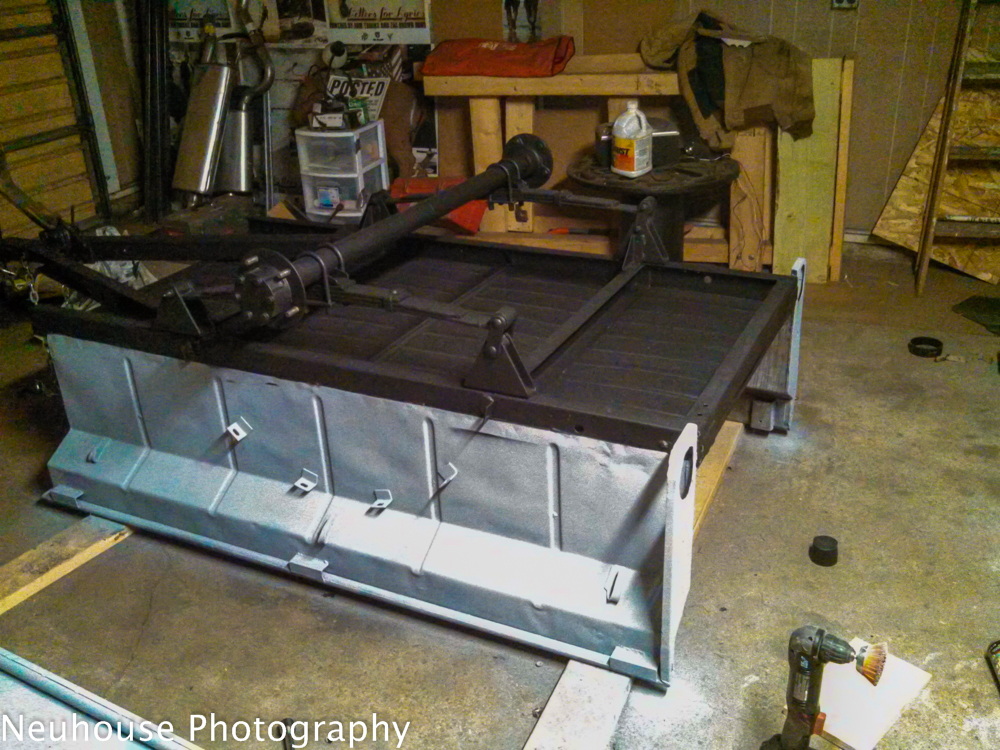 Also got my trailer color matched. Now all that is left to do is install the lights, paint the fenders, and hit the road. My bedliner for the tub has not come in the mail yet 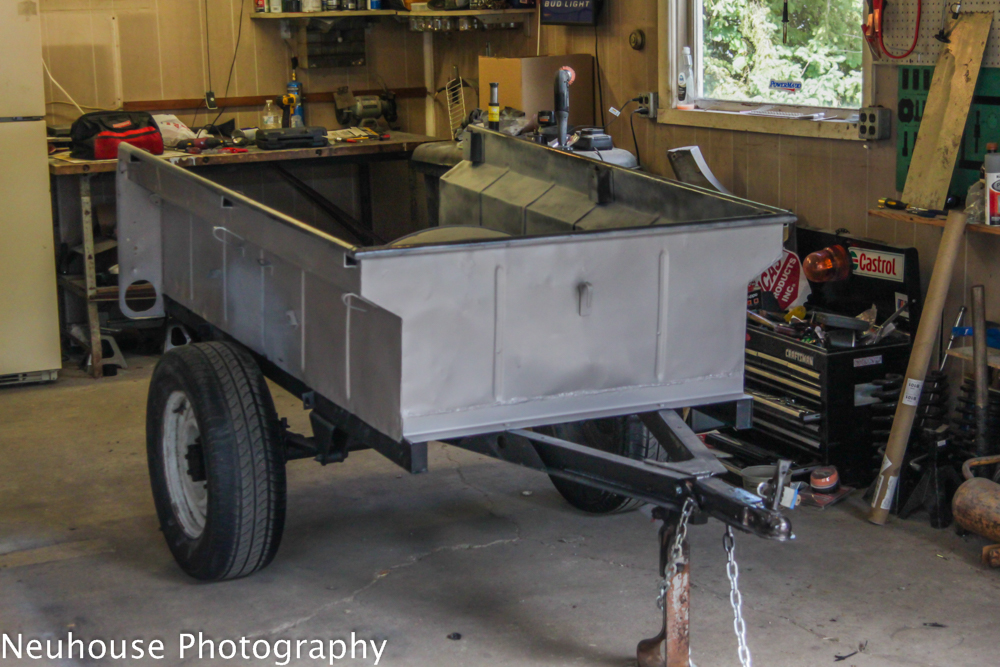 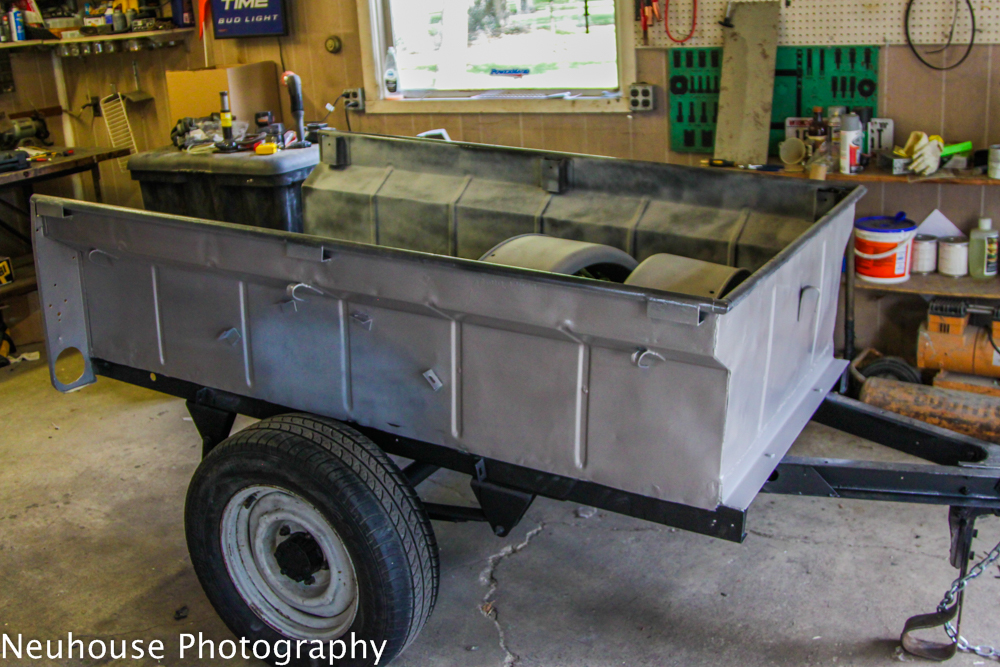 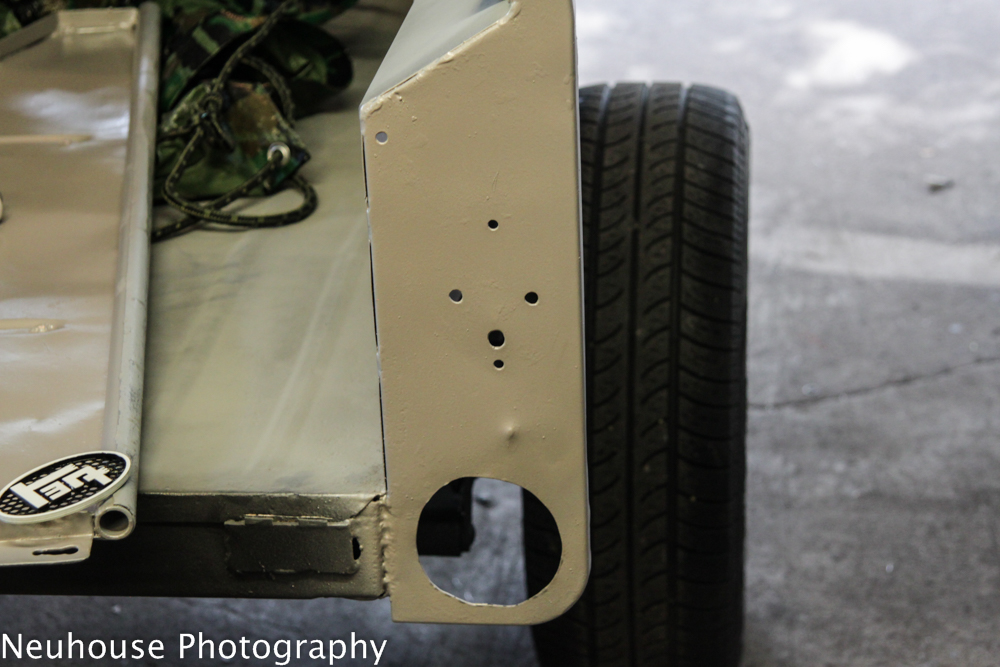 Today was a good day. I spent some time taping up and spraying the wheel wells with bedliner, painted the fenders, and installed my new jack. 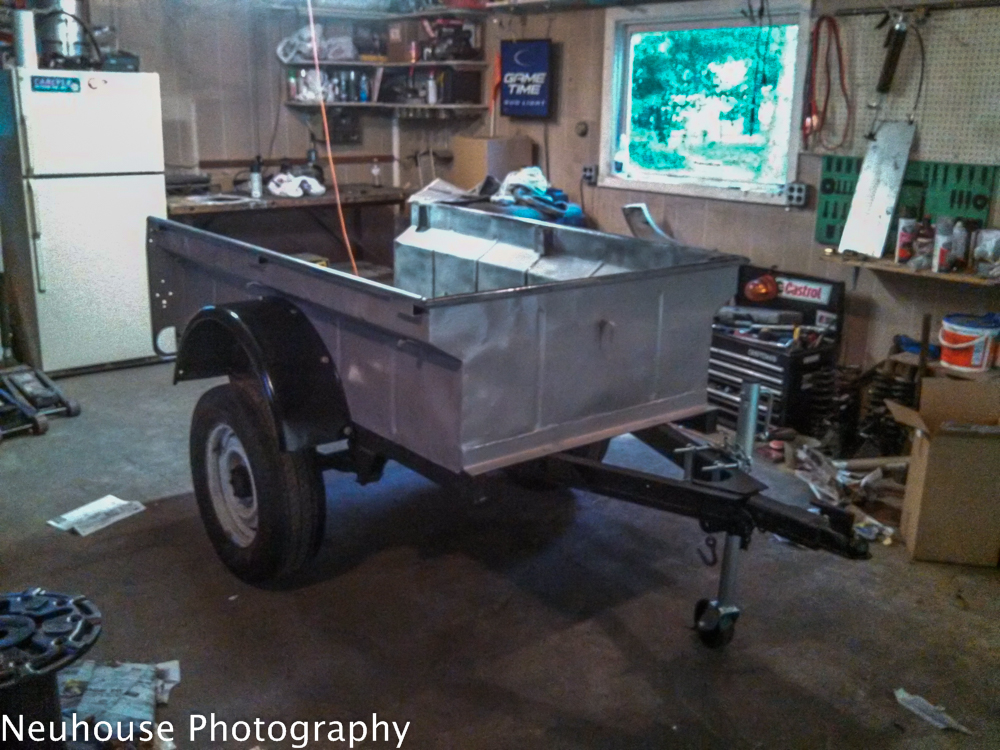 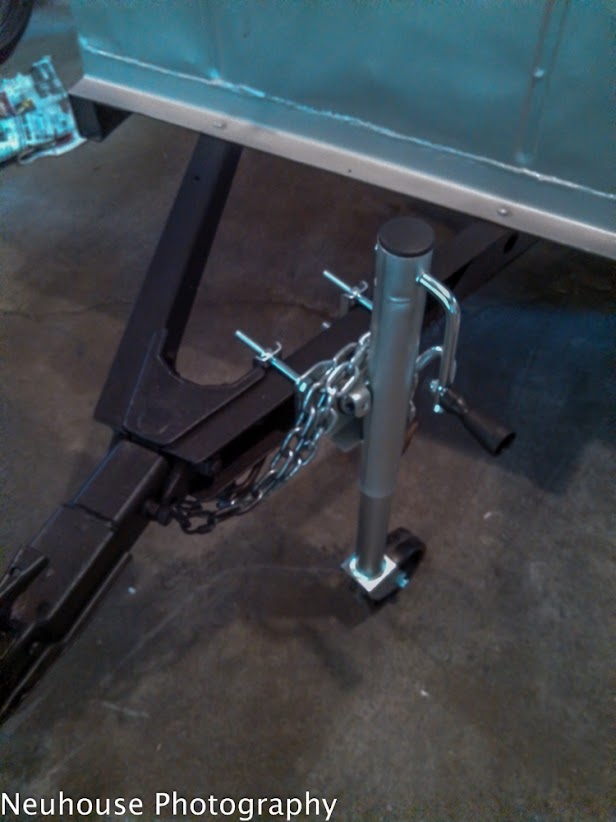 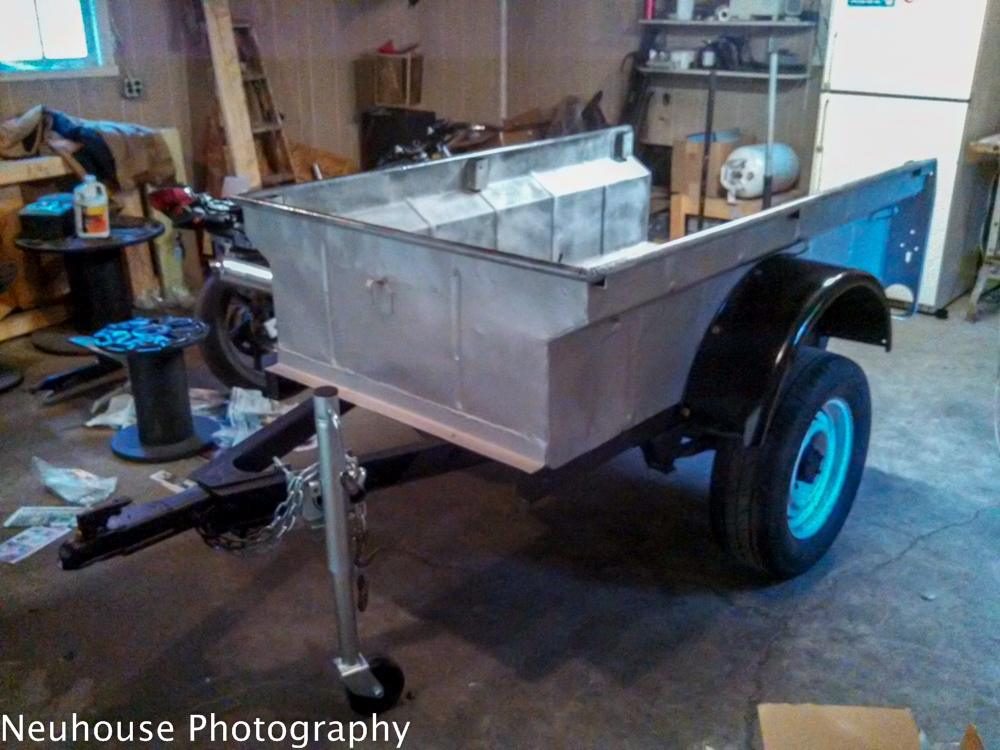 It's coming along. I am going down to Dubuque tomorrow to pick up my plate for the lid. I will probably bed line the tub then too.

Is there any reason people typically built raised lids for these trailers? I am planning on going with a flat lid for now and building a new one in the future if I think I need to.

Sent from my XT901 using Tapatalk

They build them higher for more storage volume.
Many use taller coolers and Refrigerator units.

A flat lid will look good. I started mine with a 2 1/4" edge but when my RTT was delayed I added a bevel across the front and sides.

Not home made, but here is mine with a flat lid

Will the propane tank be removable?

The problem I see with a fixed tank is getting the trailer close enough at a fill station.
My local fill station wants the tank on the scale when they fill it.

If you live by a fill station that is used for cars and busses this would not be a problem.

Maxcustody said:
Not home made, but here is mine with a flat lid

Looks very nice! I love the Manely's If we are in the right location after I graduate I think one of their trailers will be a graduation gift to myself. For now though the bantam will have to do lol.


Mark Harley said:
Will the propane tank be removable?

The problem I see with a fixed tank is getting the trailer close enough at a fill station.
My local fill station wants the tank on the scale when they fill it.

If you live by a fill station that is used for cars and busses this would not be a problem.
Click to expand...

We do have a drive in fill station near us, but I am rethinking the tank because of how big it is. I don't know If the utility of having extra propane exceeds the space required to have such a large tank. I may end up trading it for 20lb tank and making a mount for it instead.

Got the lights installed. 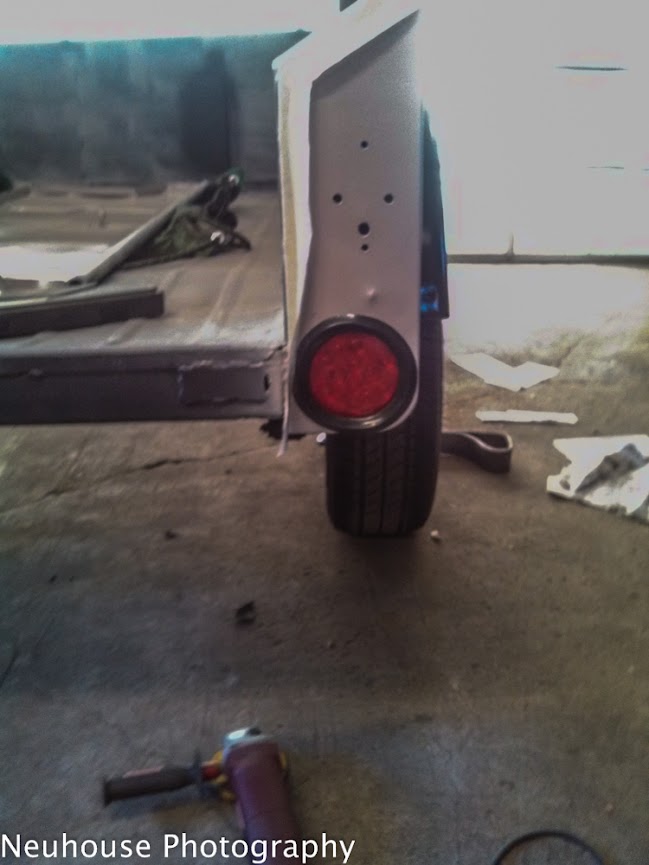