I’m considering Michelin XZLs as my next tire on my Defender. Currently I have the BFG MT KO and they are fine but a touch wide. I’m thinking the 8.25X16 size would be about perfect.

Anyone have any feedback on them? Typically 7.50X16 is the suggested size but the 8.25 is about 33” tall and narrow. But feedback on any size is welcome, also on other Land Rovers if you use these.

I purchased them for my Land Rover and my m416 trailer but as you’ve seen it’s not yet in running condition so I can’t comment firsthand. Secondhand I hear good things from people.

Haven’t they been recently discontinued though?

I don’t have the xzl, but i do have the xml on my 101fc. They are large, make lots of noise on the road, make and “bounce” on the tread lugs.

But off road, the things are fantastic! 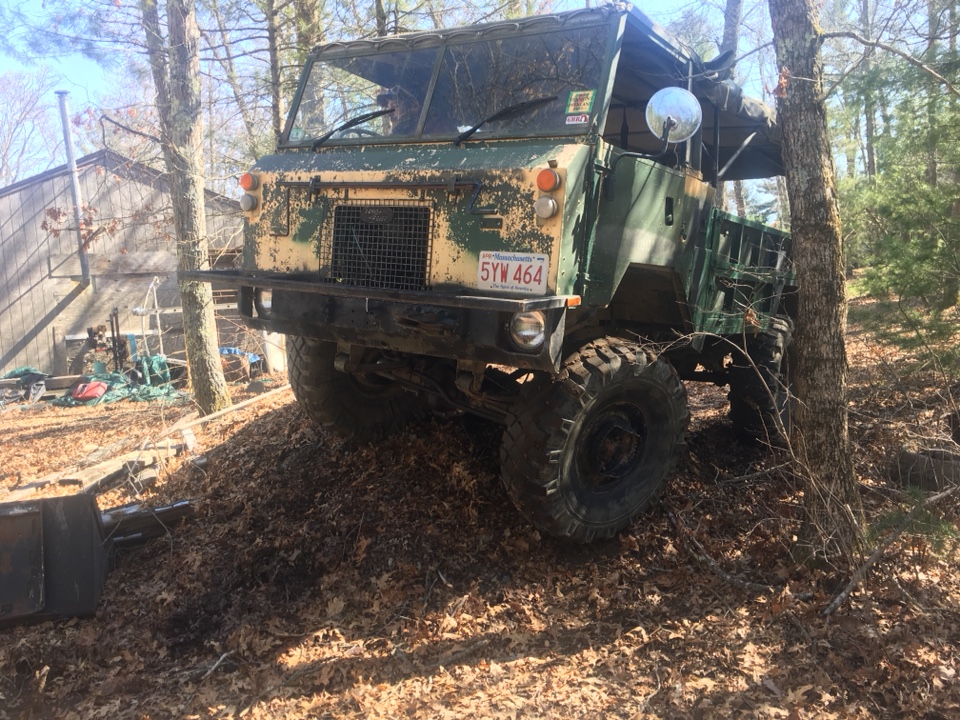 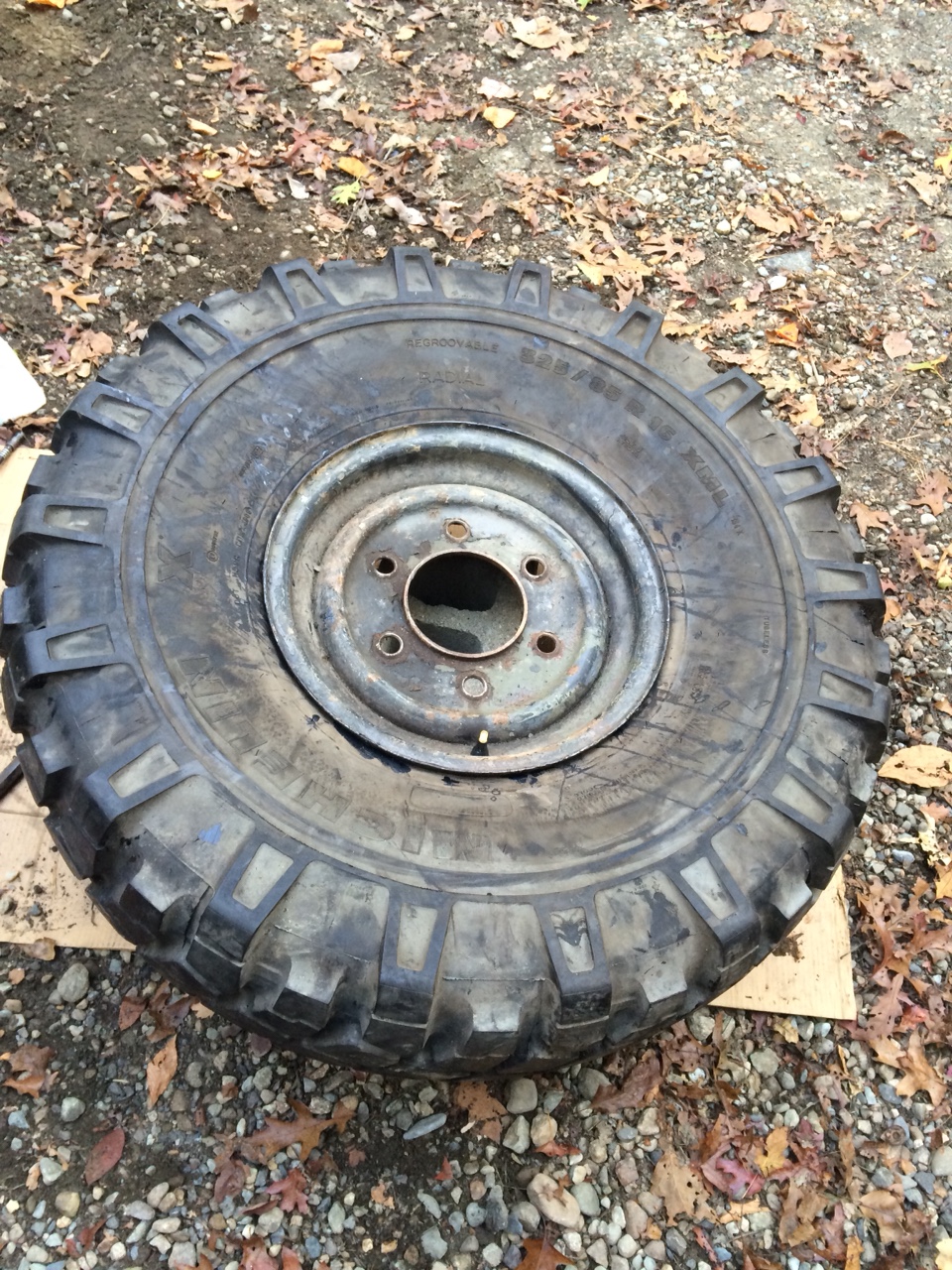 I believe the xzl tire is much more suited for on the road and is very close to an old school bfg mt. The Michelin “x” series takes forever to wear and is a heavy duty tire made for serious truck stuff so expect it to ride like a truck unless you run it at like 10psi. Rovers north still sells them in the 7.50r16 size i think.
There are also chinese clones in the “new” tread pattern style available all over ebay, albeit bigger (9r16) the “Yellow Sea ys20”

Overall i like the style and durability of the tire. They’re popular with the overlanding folks for a reason

I have a set in my backyard, taken of my defender 110, replaced with Toyo Open Country 255/85 R16. The 7.5 16 XZL were much louder, far less grip in the wet, not that great off road (nearly slid of the side of a trail, that two other vehicles passed with ease, one on AT's) and they're not that great on road miles. I had them for around 4 years on the 110. The Toyos have been a significant improvement all round. The 110 is my daily driver btw

I’ve always run load range D at least- usually E on my truck so I’m used to it riding, well, like a truck. I used to drive it daily all winter so can relate there too.

I know the old XCLs were total nightmares on and off road, unless perfectly smooth and perfectly dry.

I’ve heard very good things about the XS but it’s horrible in mud.

Defenders are never going to be an easy drive (much better with a bit of weight in them) mine is an ex military which came with no sound insulation etc. I've added a bit of silent coat noise reduction sheets and with the Toyos It's now possible to hold a conversation in the cab

Well, compared to a series, the Defender is a Rolls-Royce.

I've been using 7.50 x 16 XZLs on my 110 on and off for 3 years. They're fairly noisy but not deafeningly so, grip surprisingly well on road and in the wet (if you consider they are heavily off road biased) and seem to wear reasonably well. I recently went on an extreme off-road day in the company of a couple of 90 challenge trucks and compared to them wasn't short on grip, just severely lacking ground clearance.

The Ministry of Defence had these tyres as standard fit on their Defender and Penman trailer fleet until Goodyear undercut them with the significantly cheaper but shorter-lived G90 tyre, so they've proved themselves in the field so as to speak.

I also ran their predecessors, the XCL, on my old 90, and their off-road abilities were great but terrifying on cold, greasy, damp tarmac as a friend found out one December morning. We were due to meet up to go into London but when he called it seems he was parked on top of a brick wall after failing to slow down on a treacherous corner. I changed to BFG Trac Edge after that.

The G90 is also on my radar. I don’t think it comes in any other sizes does it?

Based on the fit of the 7.50’s, do you foresee any figment issues with 8.25’s? I have some running on the radius arms with my BFGs at full lock, but otherwise fine. I think this tire will be as tall (33) but narrower slightly. That’s one reason I’m looking into them.

J!m said:
The G90 is also on my radar. I don’t think it comes in any other sizes does it?

Based on the fit of the 7.50’s, do you foresee any figment issues with 8.25’s? I have some running on the radius arms with my BFGs at full lock, but otherwise fine. I think this tire will be as tall (33) but narrower slightly. That’s one reason I’m looking into them.
Click to expand...

7.50 x 16s are pretty small in comparison, so there's never any clearance problems - lock-stops are always best adjusted for maximum lock whichever wheel / tyre combo you use. For example I also run General Grabber AT 265/75 x 16 on Evo Corse (Terrafirma Dakar) rims, which needed the stops winding out as they touch the radius arm where HD rims and 7.50s do not. Spacers can also be used to help with radius arm clearance.

8.25 x 16 is another question altogether as you are significantly altering the rolling radius. I have always stayed within the OE sizes just to avoid clearance issues as I run standard height suspension. Michelin UK don't even list XZL so I can't even get an accurate idea of the size to compare to metric - notional listed sizes can often be quite different to what you actually get!

unless you have a really good deal on xzl's there are much better options available. They drive really rough

I see the G90's mentioned and have to reply.
I had one on the spare wheel when I got the 110. I fitted it while sorting out a bead leak on one of the XZL's. It wasn't on for long, if I even looked at the brake pedal in the wet that thing would lock up, and cornerning speeds were reduced to snails pace, a truly dreadful tyre. I suggest you check out some of the LR forums for similar experiences/reviews.
Don't do it if you value your vehicle/life
As DiscoDavis said, there are much better options than the XZL's, which are light years better than the G90's

33X12.50X15 SET AT 30 PSI make the defenders we have done a dream to drive. They float great in mud and sand, they ride very comfortably.

I know no one else really does it. But we've done about 3 now with that tire size and its about perfect. A 2" lift clears them just fine with the right wheel combo, of course.

Long Way Down: An Epic Journey by Motorcycle from Scotlan...
by Ewan McGregor, Charley Boorman
From $7.95

before and after shots...