Just had the alternator replaced 2-3 weeks ago. Battery is less than a year old. Early this morning (4a) trying to leave work, I put the key in, let the text on dash display go away before trying to crank and everything went black. No noise of anything "turning over". tried a couple more times and it randomly cranked. Got home fine.

Just now, was gonna leave to run errands and the same thing happened. Pulled out the MicroStart, solid green light and it cranked right up.

Of note, my drive to work is 5-6 miles and somedays thats all I drive the LR3. Is it possibly not getting recharged given such a short drive?

Am I looking at starter replacement, possible corrosion of ground wires?
Thanks peeps!

I have replaced starters and generally the customers had the same experience. I am curious if the black screen is normal, i.e. Load isolator during starting.

Gotcha. Thanks for the quick reply CD!

There was an issue with early years apparently with bad cables either from alt to battery or battery to starter? Never heard specifics but mine had cables replaced for something like this before I bought it.

It probably isn't the starter, but is actually the ground cable. You need to check voltage drop on the ground circuit, which is easy if you have a volt meter. Set your meter to volts, hook one lead to the battery ground terminal and the other lead to the block. Try cranking the engine and see what the reading on the meter is. In a perfect world it will be around .1V or less. If you are seeing 6-12V you definitely have a bad ground cable. Basically the engine is trying to ground through your meter.

DiscoDavis said:
There was an issue with early years apparently with bad cables either from alt to battery or battery to starter? Never heard specifics but mine had cables replaced for something like this before I bought it.
Click to expand...

Not just early years, it is a very common problem. Don't get me wrong, starters are common too, but I never recommend a starter without checking the ground since it takes about 2 min.

Thanks for the leads on potential problems. I will look into this stuff. Also, could a steady rain be a contributing factor to this issue? My windshield cowling needs replacing...

Thanks for the leads on potential problems. I will look into this stuff. Also, could a steady rain be a contributing factor to this issue? My windshield cowling needs replacing...
Click to expand...

Yes that could cause an issue, but that is probably not your problem. If your cowl is warped you should either put some kind of sealant on it or at least put some tape over the gaps. The central junction box is one of the first things that will get wet, but you would likely have other issues if that was your problem.

Starter failures on LR3s are usually intermittent, but they are very common. It may have been a coincidence that when you hooked up your jump box it started, or it could have been giving it a better ground. Do yourself a favor and go to Walmart, RadioShack, Home Depot, ect. and buy the cheapest volt meter you can find. Buying a cheap volt meter is $10 well spent if it saves you from buying a starter.

Check your drain tubes in the A pillars, the ends should be open and not a sarlac clamshell thing. Windshield cowling always bends open above the HVAC intake, sometimes leaks into passenger footwell. $80 ish for a new cowl and its pretty easy to replace and put sealant on.

With that said, I just got home from work and had the same issue with the truck not starting, yet when I first put the key in the ignition all seems normal. Again, MicroStart saves the day. I have noticed it seems to do this after long periods of being off 8-12hrs. When I went out in the afternoon yesterday, it cranked after only being off for maybe 15-20mins and then again 2.5hrs later.

Also, Im digging through the maintenance records fromthe previous owner and it shows the starter was replaced May 2014.

Sounds like it could be the battery, but my bet is still on the ground cable. You should check the voltage of the battery when it isn't starting. I would think you would at least get a click from the starter if the battery was that weak. What brand battery?

Thankfully, it cranked right up today. Work schedule's been pure **** the past 2 days. Hope to spend some time with it tomorrow a.m.

The battery...boy is that an annoying story Ill save for another time. Long story short, its from Autozone. When I get the hood open again, Ill give the specifics.
U

Here's a picture of the battery negative cable. This particular one had corrosion from the battery terminal to the firewall. http://www.disco3.co.uk/gallery/displayimage.php?album=5042&pos=31

Take a logical approach as suggested. Check voltage when it does not start. Also check battery voltage after you have driven it, and see where the battery is at. If everything else checks out, it's also possible the starter could have a problem, or you got a bad alternator.

jymmiejamz said:
Sounds like it could be the battery, but my bet is still on the ground cable. You should check the voltage of the battery when it isn't starting. I would think you would at least get a click from the starter if the battery was that weak. What brand battery?
Click to expand...

X2 On this theory. My LR3 had the same issue and I was going crazy trying to track it down.

Thanks for the pic link. Just from a visual inspection the ground cable has no corrosion anywhere. Id love to check the voltage when it wont start, except, it hasnt not cranked since my last report of it doing so. Its been cranking fine for the past day and a half.

However, today on my way to work something weird happened. I ran into to grab some lunch and when I opened the rear upper door to put it in the back, there was a guy talking on the radio. At first, i thought I was crazy and just assumed another car had their volume up. But then I got in to drive away and sure as ****, it was still going. Key wasnt in the ignition. The weird thing is that I have a satellite radio installed and I had left it on when I went into the restaurant. Yet, the sat radio wasnt showing powered on. Also, when I eventually turned the car on, the clock had been reset as well as the info screen. I'm wondering if the warming of weather over the past 36 hrs is whats allowing it to crank?

Here's a pic of the battery: 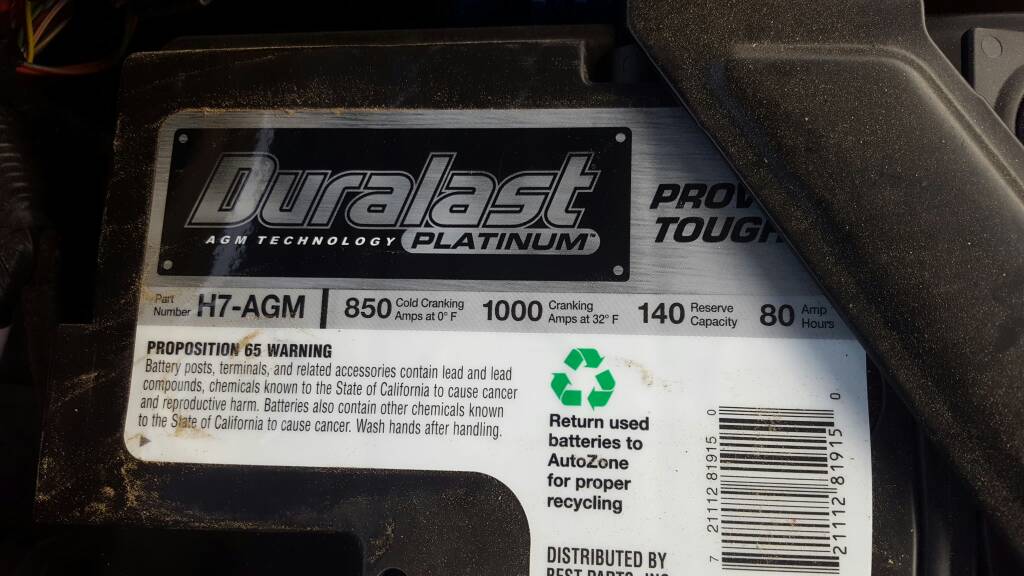