My current vehicle is a 1998 Land Rover Defender 90 V8 Auto. I’m a bit limited on what I can install and where and it needs to be temporary in nature. The first and foremost reason is that this vehicle is on loan to me from a friend, and the second reason is that I live in a reasonably poor area where it is unwise to leave items on display if you want them there when you return!

The Defender is a bit of a basic vehicle. There aren’t many places to easily hide things, and with station wagons everything is on view and display. What I came up with was something that looked in keeping with the vehicle but also didn’t give away too much about what should be mounted there.

Quite a few friends have helped me at a variety of stages to get me to where I am. I don’t have my own garage facilities but have managed to keep things on an even keel. I also can’t afford to take it to commercial premises for those things I can’t do myself.

This particular Defender has a few extras that I am unused to but have utilised as much as possible. The roll-cage, for example. Great place to mount the antenna. Everyone else will recognise the points for mounting spot lamps! The roll cage runs around the drivers area of the cab on the outside then goes inside and down to the chassis. It came from the manufacturers like this.

Anyway. The radio & GPS setup. The GPS came first. It’s a Garmin Streetpilot III. I originally planned for it to be used with an APRS setup but that’s been put on hold. But I had the GPS and with a bit of care worked out how much space I needed. It was a piece of luck that I found that Land Rover had carefully put a small ashtray right in the middle of the dashboard. Removing this and putting a bracket there to hold it in place was nice and easy.

I’m a UK radio amateur with an Intermediate licence (the middle of 3 levels) and a member of Raynet. Within a few weeks of this going in I worked out how to fit the separation kit for the Yaesu FT8800 on that plate. I bought some brackets from B&Q (local DIY supermarket) and with care and measurements marked off to fit them underneath the plate. Once in place the GPS is on top and the 8800’s head is underneath. The data cable for the separation kit runs along the dashboard, up the door rubbers inside and into the headlining, then down the roll cage on the inside to the radio mounted behind the seats in the rear.

A lot of care was taken at that point as to how and where to mount the base. I decided to have the fan facing backwards and the head forwards. This means when I need to plug the data cable in to program the radio, or anything else in the back, I can with ease rather than scrabbling around in little space at he back of the seat and the internal part of the roll cage.

I don’t have a split charge system fitted yet for a few complicated reasons (You’ll hear later!) so I’m using power packs. These are used then taken indoors and recharged the regular way with a battery charger. A lot of faff but it does the job.

I have used ammo tins for over a decade and whilst I’ve usually gone for the larger ones I’m finding the .50 cal and .30 cal boxes are quite handy. I’ve a 12v Gel Cell battery in a .30 cal tin as well as a larger Gel Cell in a .50 cal tin. The .30 cal fits nicely behind the passenger seat in the Defender and has one accessories socket in the top. Just a regular cigarette socket. The radio is plugged in most of the time and I have a 1-to-2 adaptor so I can run the GPS through it as well.

However, whilst the radio power cable is properly plumbed in, the one for the GPS isn’t and, um, just hangs there. I also don’t have a CB installed yet, but that will come later.

The antenna is mounted on the front upper section of the roll-cage where spot lamps would normally mount. When the antenna is not in use it sits inside next to the alpine window at the back and slotted through the side of the roll cage.

And finally, the speaker for the Yaesu is strapped to the middle of the internal section of the roll-cage pointing downwards above the gearbox. Good enough for either the passenger or the driver. A carefully measured L-angled bit of metal mounted to the spot-light mounts with the antenna mount on that. Right. The dash-plate. This is a side on view, you can see the tilt next to the windscreen to help keep it aligned. It was painted hammerite red-oxide with a black coating on top. However, in sunlight I found the glare quite considerable so covered the leading edge with some tape which did the job. The bolt you can see is allen-key which goes down through to a piece of metal to brace it in place. The other two behind the Garmin mount hold the head-bracket in. I felt it was stronger than glue or velcro. I may yet remove it and redo the paint, but haven't got around to it yet. I suppose dusting it may help more first Switched On (Difficult to see as used flash - Sorry ) Because I'm moving over to fixed battery setup rather than as I showed above with battery inna ammo tin I and a friend have fitted some batteries in the battery box. It was a bit of a squeeze though This shows the two batteries in the box. The orange thing is the split charge thingy. That is mud in the box too Hence: At two locations in the vehicle (one up front and one in the back next to the rig) I'll have one of these little boxes based, although it'll have a cover on obviously I think that will be enough power/sockets

I think that will be enough power/sockets
Click to expand...

nice thinkpad (T42?). any details on that 12v accessory socket? i'm looking for something with a sturdy, waterproof lid. that one looks pretty good

Nice idea, here's my install, with the main radio unit behind passenger seat, though I have a Yaesu extension speaker on the back of the cubby.
My sat nav now lives above the mirror. (not shown) 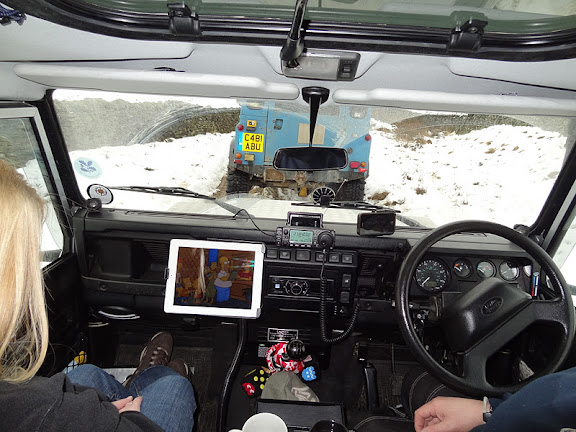 Alfio, that 'accessory' socket was made from a Maplins plastic box that was large enough to take two full length ciggy sockets plus fuse and wiring.

Later, I made a larger one that lives in my car that has 2x Hella and 2x regular sockets. Other bits bought online and fitted together. Soldered where I could but often crimped as those tools were easier for me.

The Landie has moved on and alas is currently off the road awaiting a replacement engine. The 4.0 L V8 was unwell with water loss issues and he's having a 4.2 turbocharged V8 in there instead... The poor mite huh!

If you want more photos, measurements etc of those sockets then I can see what I can do... I might even have a spare on a shelf here.. Hmm...

Saratoga said:
Alfio, that 'accessory' socket was made from a Maplins plastic box that was large enough to take two full length ciggy sockets plus fuse and wiring.
Click to expand...

saratoga, you aren't answering the most important question: is that thinkpad a T42? :wings:

thanks for the info on the box, do you remember anything about the 12V cig socket? that's really what i was asking about. the only ones i've been able to find are 100% crap

Alfio; Yes. It was, I think, a T42. I had a raft of Thinkpads then things changed and I moved back to the PC for a while and have a Dell Mini 9 souped up for my portable needs. However, in time I am sure I will go back to Thinkpads, maybe a x60 or something.

My Radio spec laptop with a com port is still in use now, tied up on loan with my scanner in a decent radio shack with a friend, ironically the current owner of the above Defender. T21 I think it is.

The 12v sockets I built myself using parts from Maplin here in the UK as well as sockets from an ebay seller (Towzatronics). I chose hella and regular type sockets as use both with work anyway (trucking). I've got a few knocking around here somewhere. If you want I can sort out some piccies but they're nothing special.

If you're going to build some up then make sure you provide enough room for the fuses and cable inside. Mk1 was a bit tight on those

I've now got a Discovery 2 and a Kenwood TM D710, so that is the next project
A

Thanks for the update -I'm really interested in one of your olr setups whe you had battery power in an ammo box for your radio needs.

In my current vehicle I don't have room for a second deep cycle battery, but I don't want to permanently install the radio with iced wires to the main battery.

Any tips/advice/guidance you might be able to vie would be greatly appreciated.

The battery in an ammo tin was basically measuring a golf cart or mobility scooter battery to see what I could get then setting it on its side and giving it fuses/connections/charge points.