GlennA said:
The ladder is always on a firm level surface.
Click to expand...

That makes sense and I think that would work well on the flat metal bumpers of a Land Rover or a TJ.

Also makes the ladder shorter, I've had instances where the ground on the ladder side of the Jeep was lower so the ladder wouldn't reach the ground properly. I've got a ladder extension for mine so it works out ok but it would be nice to never need the extension.

It wouldn't work on a newer Jeep like a JK - the plastic shell of the bumper isn't in contact with the metal bumper underneath so the ladder would likely crack the plastic shell - some sort of ladder mount would need to be fabricated to go over the bumper.

It also wouldn't be a very difficult hardtop to build in either metal or fiberglass - all flat surfaces, the mating points on the tub are all straight lines; no compound curves anywhere and a flat barn door.

I wish someone would make a stretch kit ("TJ-6") for the TJ that would let you use an LJ top.

rnArmy said:
I wish someone would make a stretch kit ("TJ-6") for the TJ that would let you use an LJ top.
Click to expand...

There's a group on Facebook devoted to lengthening YJ's that way: https://www.facebook.com/groups/YJUnlimitedbuilds. It's a private group but if you ask to join you might find a lot of good ideas there; lengthening a TJ wouldn't be much different than lengthening a YJ (and BTW if there were such as kit as you wish, the one kit could be made to work with both YJ's and TJ's).

jscherb said:
I've installed my RTT to open off the back and off the side, but never this way:

I'm trying to come up with reasons to install it to open over the front like that and haven't come up with any other than it reduces the overall footprint of the vehicle + RTT when set up. Anyone have a reason this would be a better setup than off the side or the back?
Click to expand...

Maybe for tall gorillas like you and I? Install a batwing/270d awning a little higher up to have more headroom?

jscherb said:
Back in November I posted about the Ineos Grenadier, a 4x4 from a new company that picks up where the Defender left off (https://expeditionportal.com/forum/threads/land-rover-ideas-for-jeeps.218029/page-25#post-2854710).

4WD Magazine (from Canada) recently posted this video about it:

I'm looking forward to these being released; I can only imagine that the price will be such that it is high enough to pay for all that R&D (and hopefully survive), but also high enough that I can't afford one.

If you've ever been to Italy maybe you've seen Defenders belonging to the Carabinieri - a police unit of the Italian army:

This small item appeared on the last page of the January issue of Land Rover Owner:

The item didn't say specifically which Jeeps would soon be part of the Carabinieri, but I'm guessing it'll be the AADS Utility:

A few weeks ago there was some discussion in this thread about using the space under the Jeep for storage or something. This is from an article in the January issue of Land Rover Owner:

I direct your attention to the second callout in the photo above:

GO WITH THE FLOW: the 70-litre fresh water tank is fitted internally, so there's no risk of freezing in harsh winters. There's an external locking filler in the rear quarter panel.
Click to expand...

The water tank is fitted in the spare compartment under the floor (notice the spare now on the roof rack), so it's not truly under the vehicle, but it's an interesting implementation nonetheless.

There's hot and cold running water. A heat exchanger in the engine bay feeds hot water to the tapon the rear door, while a connector on the front bumper receives a shower connector. Temperature is controlled via the Disco's heater controls while the engine is running, meaning Katrina can enjoy a hot shower any time, and literally anywhere.
Click to expand...

Unfortunately there's no further information in the article about the water system, nor are there any further photos than the ones above.

What about something like this for the Wrangler? There isn't a compartment like that in the Wrangler, but there is some space underneath the Jeep. For those interested in mounting a water tank under a JKU, Dan Grec's excellent article is required reading: http://theroadchoseme.com/diy-4x4-water-tank-pump-filtration-and-treatment. Everything you'll need to know about is in that article. Dan's Jeep is a 3.8L JKU and he says the dimensions under a 3.8L JKU should be checked because they may be different than his. I checked, and find these dimensions, the length available under a 3.6 model is less than Dan had under his 3.8 model:

The tank could possibly be taller than 6", but I'd recommend a skid plate under it if you have a taller tank. The fuel tank, which is on the other side of the driveshaft, has a skid plate with a height that might allow a 7" tall tank but you'd have to check.

There are a number of RV water tank suppliers and I did a quick search to see if there are stock tanks that might fit in the space under a 3.6 JKU. Here's one that should fit, although at 18.5" long it would leave almost 6" of length space unused. Perhaps with more searching a longer version of something like this could be found: https://www.ntotank.com/5gallon-ronco-rv-water-tank-x4711116. It's only 5 gallons, if a 24" long version of this could be found it would be about 6 gallons, which is probably about all you could fit in the space under a 3.6 JKU.

Doesn't someone already make one, that fits into the rear floorboard area?
Either one would be good for low CG.

Zeep said:
Doesn't someone already make one, that fits into the rear floorboard area?
Either one would be good for low CG.
Click to expand... 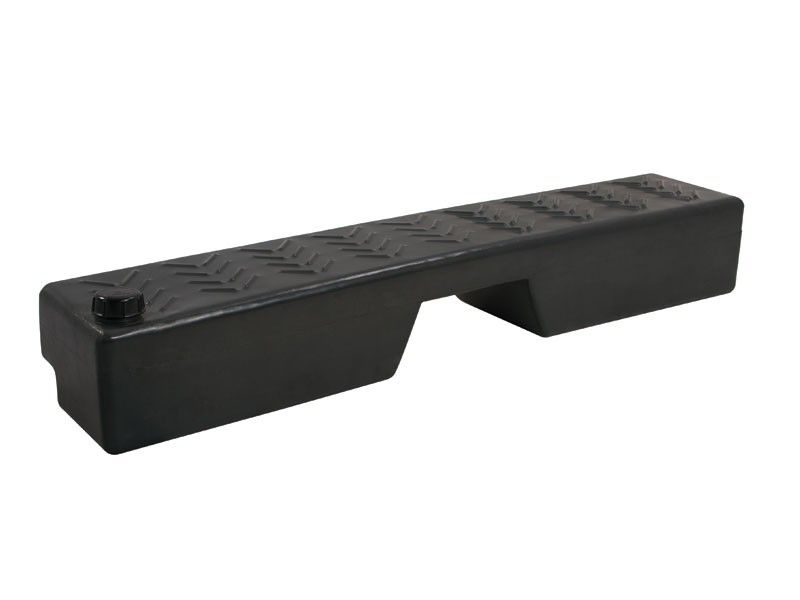 This cleverly designed 40l (10.6gal) polyethylene tank is extremely strong and is shaped to sit on the vehicle's floor behind the front seats.

I had one of the frontrunner water tanks in my tacoma and had a 12v push button faucet hooked up. It holds 11 gallons which was great. sad to say with the 60% delete I have on the jeep this will never be an option for me

Clymber said:
I had one of the frontrunner water tanks in my tacoma and had a 12v push button faucet hooked up. It holds 11 gallons which was great. sad to say with the 60% delete I have on the jeep this will never be an option for me
Click to expand...

Here's an idea... if you've done a 60% delete and have a compartment on the floor like mine:

You could probably fit one of these 10 gallon bladders in the compartment:

There might not be enough space to allow the bladder to be filled to maximum capacity, but being flexible it should form to the space available.