There are lots of different ladders on the market for Land Rovers - ones that account for the license plate, ones that don't, long ones and short ones, here are six more styles:

One of the factory options for the "new Defender" is called the Explorer Pack, which includes a cargo box on the outside at the left rear window (I've posted photos of this before) and a ladder on the other side:

Until I saw this next photo I thought it was a fixed ladder and that you'd have to step on the tire first to get up to the ladder. Turns out it deploys like this:

Back when I designed the LJ Safari Cab I considered adding a ladder to the design. I built two proof-of-concept ladders, both with Land Rover inspiration. One went all the way down to the bumper and accounted for the license plate and the second was a shorter ladder tha ended above the license plate.

After using the Safari Cab for a while without a ladder, I decided that I didn't need one. If I ever need to get all the way up onto the roof rack, I step first on the bumper, then on the top of the spare and then onto the rack. Because I'm tall that works for me but people who aren't so tall might need an actual ladder for that move.

If you don't want to drill holes in your Jeep/hardtop but want a ladder, how about bolting it to your spare? 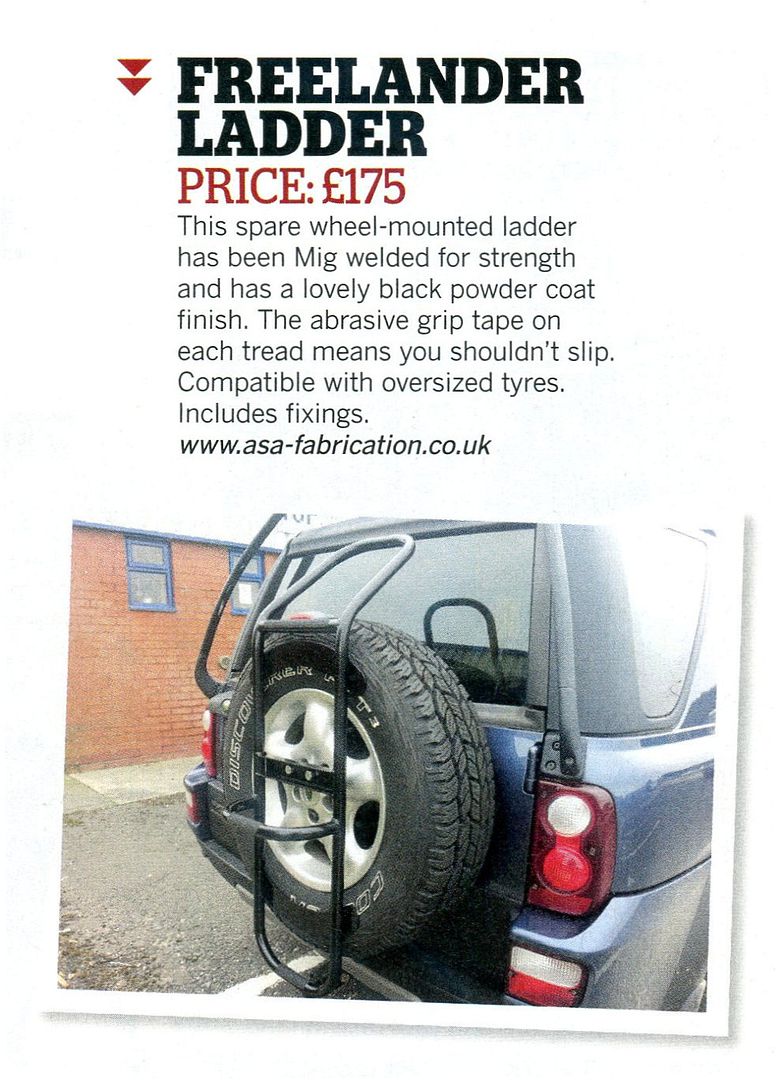 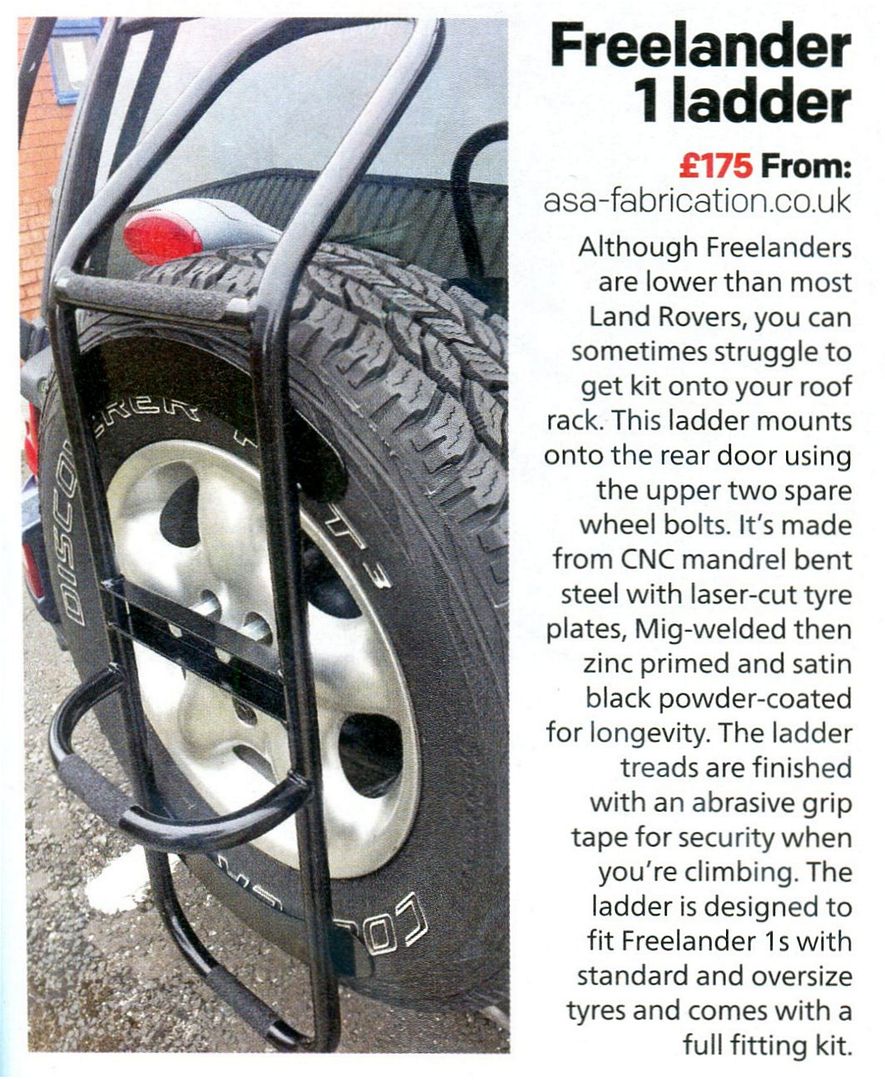 You'd have to trust your spare carrier (and tailgate if the carrier is bolted to the tailgate) in order to use one of these ideas. Probably not something you'd want to do unless you've reinforced your tailgate/spare carrier somehow.

Another way to the roof is using foldable "firetruck steps"... Requires a fairly rigid wall and backing plates...

PaulJensen said:
Another way to the roof is using foldable "firetruck steps"... Requires a fairly rigid wall and backing plates...
Click to expand...

I use foldable steps to access my rack but they don't require a rigid wall of backing plates. Instead of drilling holes and bolting them to the body and the hardtop, I bolt them to the door hinges. I find these more than adequate to gain height for accessing the rack and deploying the tent. The steps flip down for use and lay flat against the door when not in use. I only have them mounted to the lower door hinges because that gives me the height I need, but I could put them on the upper hinges as well if I needed more height.

They're not very large, but large enough to be usable/comfortable in flimsy flip-flops.

They also can mount on my tailgate hinges but I rarely do that because to climb all the way onto the rack I can step on the bumper and on top of the spare as I mentioned in my last post.

Because I have the MORryde HD door hings on my JKU, these hinges install/uninstall in a minute without the need to loosen the door hinge bolts, so I install them when I need them for an expedition and remove them when I get home even if the expedition is just a short trip to Home Depot to load some building supplies on the rack.

There are other steps on the market, all of which I think mount to two hinges rather than just mounting to a single hinge like the ones above. Also, when mounted to the rear door, if the rear door is open the other on the market interfere with opening the front door when the step is down. 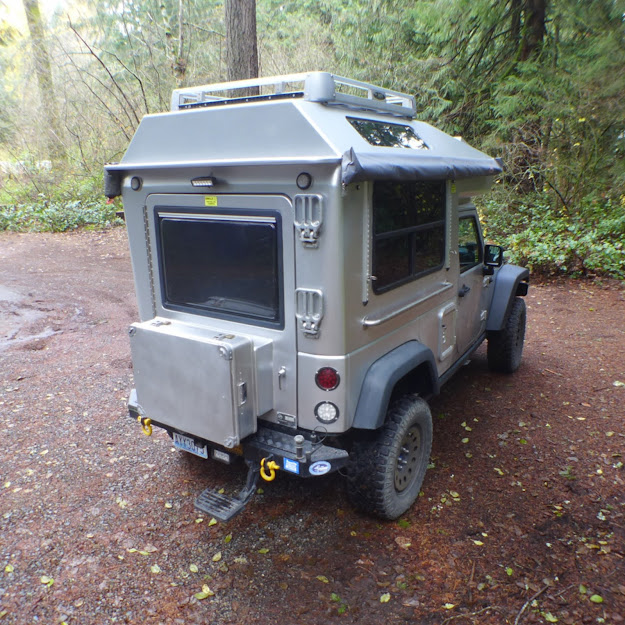 (above) Below the side window I added the stainless steel handicap grab bar... I use that for easy access to the roof rack without climbing on top... To get to the bar, the lower fold-down step is used to get to the bar height... The mounting flanges are backed with a 1/4" aluminum plate on the inside... The rear cabin is 1/2" balsa core/ glassed with 1/8 glass and resin inside and out... Solid... The 8" deep plywood rear door overhang (glassed and painted) serves as a minor rain cover for the door and a nice solid place to stand up there... In a pinch, I can tip toe along the top of the awning covers (2 sides)...

Ladders from Front Runner on the LR3 are mounted to the license plate holder and the hinge on the rear door, no drilling required and to be truthful, although I have heard stories of rust, they are very sturdy. Been on there for 5 years.

Sometimes photos in a Land Rover magazine give me an idea for something but not the way I'd want to do it. For example, in an earlier post I pointed out a solar panel on a Series Land Rover that was stored on a slide under the roof rack, according to the caption it seemed to be removable so it could be set up on the ground. Another photo had a solar panel mounted to the roof in front of the rack. Reposting those photos:

I think about a sliding mount is a great way to go, but why not have it stay on the slide instead of removing it and setting it up on the ground? I did some concept images based on my new rack extension...

Stowed, it would slide between the bottom of the rack and the roof:

Deployed, it slides out from under the rack:

It would generate power even when stowed if nothing was on the rack above it but could be pulled out when there was something on the rack.

I think I've seen these somewhere for Wranglers but I can't remember where. Wouldn't be hard to make though. I wonder how much venting they really provide and if they do work how much cooler they would keep the inside of a closed Jeep in the hot sun.

Not sure how much cooler they will keep a jeep but they keep the back of my LR3 a bit cooler, especially with the roof vent open for circulation. Actually I use them more for ventilation at night as I sleep in the LR when I camp by myself. They have screening to keep out the bugs and louvers to keep out the rain. They are quite noisy, I mean wind noise, if left in the window area when driving. I have done that only once when I forgot, early on, that they were there.
I highly recommend them but keep in mind that they are light gage aluminum and will bend easily.

I've built such vents for our JK by myself (aluminium rail and ABS plastic) and added a fan to bring more air into the car. We need them also for more ventilation at night when we sleep in the car without opening the roof tent.

derkleinejeep said:
I've built such vents for our JK by myself (aluminium rail and ABS plastic) and added a fan to bring more air into the car. We need them also for more ventilation at night when we sleep in the car without opening the roof tent.

Since we're on the subject of cabin ventilation...

I wonder if vents like these in the roof of Jeep hardtops would help keep the Jeep cool inside? These vents were from the factory in Series Land Rovers that had the Tropical Roof option.