MCX said:
I could be missing something, but this seems like a disaster waiting to happen. If that metal plate comes free with a lot of tension while pulling, it's going to fling back at a high rate of speed and be a flying metal projectile aimed right at the front of the vehicle.
Click to expand...

Cautious use would include:

1. Make sure you're staking it into firm ground. No mud, sand, etc.

2. Use a well-weighted winch damper on the line

3. Have your spotter position themselves in a safe place close enough to where it's staked so they can raise a signal the second the see any movement of the plate against the ground.

If there is any concern over a single anchor point, and its a good point to consider, use a 2 plate setup with a self equalizing connection to tie into.
Last edited: Sep 9, 2020

ratled said:
If there is any concern over a single anchor point, and its a could point to consider, use a 2 plate setup with a self equalizing connection to tie into.
Click to expand...

That wouldn't take up much extra storage space - the plates would "nest" together and you'd need more stakes and a connection between them, but overall storage space requirements would still be way less than something like a Pull Pal.

Looking at some Picket Line systems I saw that Hurely makes an off the shelf one that was interesting. It doesn't give the mechanical advantage of a traditional Picket line system but is more along the lines like jscherb is talking about. 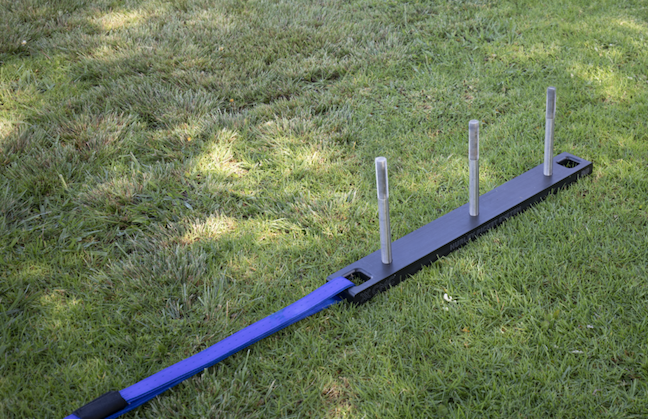 I guess if you're serious about survival, this could be a good book to have...

That pricing makes the ones you can have custom made in India and Nepal more attractive, I'll definitely look into shipping costs next time I'm over there.

I could be missing something, but this seems like a disaster waiting to happen. If that metal plate comes free with a lot of tension while pulling, it's going to fling back at a high rate of speed and be a flying metal projectile aimed right at the front of the vehicle.
Click to expand...

perhaps an unburdened line from the far end to an obstacle, or another stake, in addition to the weighted winch line device, to help from becoming a flying projectile
B

MCX said:
I could be missing something, but this seems like a disaster waiting to happen. If that metal plate comes free with a lot of tension while pulling, it's going to fling back at a high rate of speed and be a flying metal projectile aimed right at the front of the vehicle.
Click to expand...

I believe it will behave as you describe - pull out of the ground gradually like a tree stump.

Use of synthetic rope in place of cable will also reduce the energy transfer to the metal anchor plate if there is a failure.

jscherb said:
I believe it will behave as you describe - pull out of the ground gradually like a tree stump.

As soo as I get some time I'll make a one (or maybe a couple) for testing and we can find out.
Click to expand...

Yes, an improperly placed system will pull out gradually .

I have used picket line ground anchors for years. They are more than solid enough that I have trusted my life, my partners life and our patients life in vertical situations. I have practiced with them pulling my Jeep up hill to simulate getting stuck - haven't had the actual need yet. A ground anchor is a solid piece of kit to have when used correctly - as is any tool. I have also used them in small scale mining situations as well with pulls of of tens of thousands of pounds with no issues

While I have concerns over the OPs original article listed I think he has the skill set to fab up a proper set. A bar of about 3' as a minimum, with long enough stakes, again 3' minimum, with a proper rake of the stakes to add a mechanical advantage will work well. For a typical Jeep, this is the Jeep forum after all, I use and recommend a pair of ground anchors. This would make the winch the lowest rated part of the equation. For some of the full sized trucks I could see them going up to set of 4 ground anchors.

I personally think a picket style ground anchor is a superior style ground anchor but I understand that it is a perishable skill set. I can see the value of this plate style ground anchor. I mean lay out the 2 plates about 5' a stride and in line with the direction of the pull, sink the stakes in the ground (in my mind there would be a little collar on the plate to force the proper rake to the stakes), tie in your tree saver as the tie point for the 2 ground anchors and you are good to go.
Last edited: Sep 10, 2020

Back to the awning project... when I sew a final version using better fabric I think I'll shorten the awning a bit. I made the proof-of-concept canopy from a Harbor Freight tarp that's 7'6" long and I think it's a bit longer than I really need, so I'll sew the final one at either 5' or 6' long. Probably will do 6' and will put additional grommets in the side so it can be installed at a shorter length when needed. A photo-edit to about 6':

I need to decide on the color. I plan to use the awning on both the black LJ and the JKU which has a Spice (tan) hardtop so I could use either of those colors. Or maybe I'll do it in a camo print. Haven't decided yet. Any suggestions?

A similar one from FrontRunner: https://www.frontrunneroutfitters.com/en/us/front-runner-easy-out-awning-3-wall-enclosure.html

More on awnings from the Land Rover magazines - here's a simple one to implement, no sewing, just some straps, stakes and guy lines.

Another interesting design, this one requires a roof rack rail to mount to though:

Sent from my SM-G950U using Tapatalk

Ever since the early Series models, Land Rovers have had full rear doors, often called "barn doors." It makes access to the cargo area so easy I don't know why they never caught on in the Jeep world. Barn doors have been part of the Land Rover since the 1950's. This one's on a Series III Land Rover from the 70's:

Jeep teased us with a barn door on the jeep Africa concept a few years ago:

But the closest Jeep ever got to a production barn door for this country was on the postal Jeep of the 60's/70's:

Jeep did produce a barn door for export only, it was called the "World Cab" and was available in CJ7 and CJ8 versions. This is an ad from the UK:

And Mahindra in India, which has always produced cool Jeep variants, has barn doors on all of its long wheelbase jeeps. This one is a Savari:

But no factory barn doors in the U.S.

When I designed and built the LJ/TJ Safari Cab hardtop and the JK/JKU Safari Cab, a barn door was at the top of my design requirements list.

I've done two different barn door designs for the factory TJ hardtop as well but I haven't made the molds for that one.