The original Norcold N300.3 12V/120V/LP refrigerator that came in my 2008 Lance 815 has been an aggravation since I bought it from the original owner about 4 years ago. Not so much that it didn't work fairly well, but more that the limitations, efficiency and idiosyncracies of gas absorption refrigerators left a lot to be desired. On 12V, the unit draws about 11 amps and the duty cycle is pretty close to 100% on warm days if I want to keep things suitably cold for longer durations...about 3000Wh/day by my calculations.

First aggravation, I had to replace the cooling unit about 3 years ago due to returning from a trip and parking my rig on the sloped parking area where I store it when off the truck, though I level it when I take it off the truck. It was late and I didn't feel like unit off the truck or unloading the fridge, so I just left it on until the next afternoon. By then the cooling unit was trashed and I ended up replacing it myself with a rebuilt one at about 1/3 the price of a new fridge. That worked fine, but I've always been nervous about parking in unlevel areas, even for a short while. No one could tell me what the limits might be.

The other problem is that I only have one 20lb LP tank and originally only 1 100Ah FLA battery. The battery would be near dead in the morning after running the fridge and other minor loads overnight unless I switched to LP at night and while parked. As I'm often off-grid for several days at a time, that eats into my LP allowance for occasional hot water and cooking.

To cope with this situation, I bought a couple 100W Renogy Eclipse Panels and an MPPT controller...that helped, and I could run on LP during the day while I recharged the batteries and then switch to 12V overnight, but I didn't have enough power to run 12V full time. I could charge the batteries or run the fridge during the day, but not both. So, I bought 2 more panels and with those, I could run it off 12V full time for several days before having to crank up the generator and makeup the shortfall or switch over to LP and let the solar system catch up. That being that I was typically using 3000+ Wh/day and, on a good day, only putting back about 2200Wh via solar. All this was a PITA.

I had been thinking about switching over to a LiPo battery for a while and finally did at the beginning of the year. Adding the 100AH LiPo really helped buffer me for cloudy days, but it didn't fix the fact that I was using more than I could put back with solar...I still had to run the generator after 2 or 3 days to catch up.

I was reading the current build by DrivenToAdventure last week where there was mention of a refrigerator brand I'd not heard of before...Vitrifrigo. I did some research and discovered there is a 4.7 cu.ft. model that might fit the space I had available. It's compressor based and operates off 12V or 120V and only draws 45W, either on 12V or 120V...this translates to 3.75A when operated on 12V...an immediate 60% reduction in power when running...and that doesn't take into account any reduced duty cycle. I was de-AMP'd

I spoke to one of their dealers, Citimarine in Miami to confirm a few things and they suggested that I speak directly to the USA distributor that was also in the S.FL area. Spoke to Dana with Vitrifrigo and he was kind enough to double check the actual unit dimensions on a unit they had there. Looks like it would fit with a little room to spare, though I'd have to enlarge the opening about 1/2" in height and about 3/4" in width...and there was space to do both. Ordered the unit on Monday the 8th and to my surprise, FedEx ground delivered it on Friday morning the 12th...by 7pm Saturday evening, it was in and running! Freight was included, btw.

My biggest concern in all this was whether or not I'd have to remove the door frame to get the old unit out and the new unit in the camper. I had to take some pieces off the back of the old unit and remove the door to the wet bath, as it protruded just enough to keep the old unit from clearing between the bath door and the seating across from it. The new unit had about 1/4" to spare.

Unlike the Norcold, which really takes a day to cool down if it's been off, the Vitrifrigo was down below 40F in less than an hour...and I went from 2.7 cu. ft. to 4.2 cu. ft. with a real freezer section.

This afternoon I inserted a power meter in the 12V power feed to the unit and my preliminary power measurements are in agreement with the factory spec's...running current draw is 3.72 amps for about 48W at 12.6V. Quiescent current is less than .01 A. I had let the unit run overnight, so it's certainly thermally stabilized...around 35F at the current thermostat setting. The big gain is going to come from greatly reduced duty cycle. Temp today was in the low 70's, so not near a worst case test, but I recorded about 13Wh/hour with the unit running for around 4 minutes every 15 minutes. This is without me opening the door, so likely typical of overnight performance. That comes to around 312Wh/day instead of 3000Wh/day with the Norcold. Even at a conservative 500Wh/day, I've reduced my power needs by 83%...that's huge!

I can't speak to longevity, but I'm impressed with the build quality of the unit, both inside and out. Insulation seems far superior to that of the older unit. I'll be taking off on a trip at the end of the month and will be monitoring the performance over a typical usage cycle. Will update with any useful info.
Cheers! 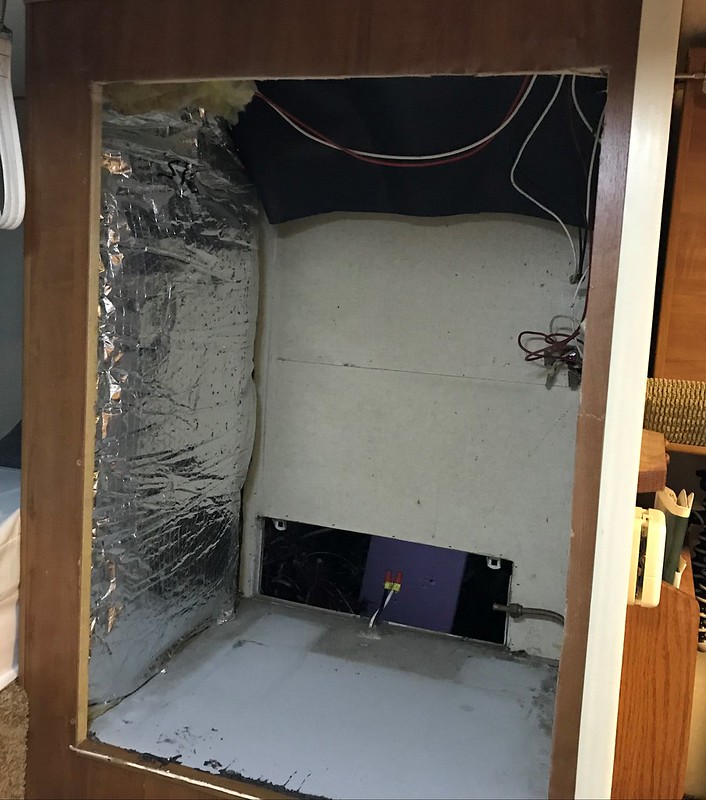 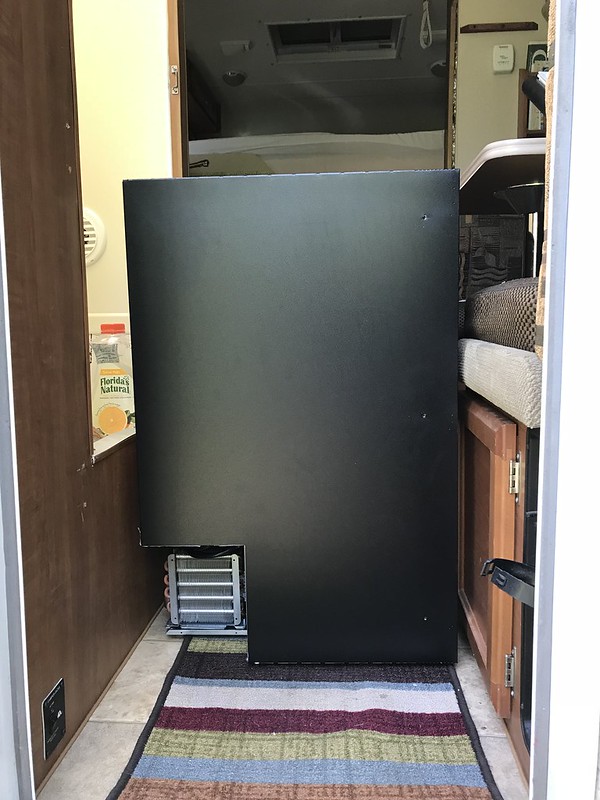 In, but bottom trim to install...
[url=https://flic.kr/p/Nidxye] 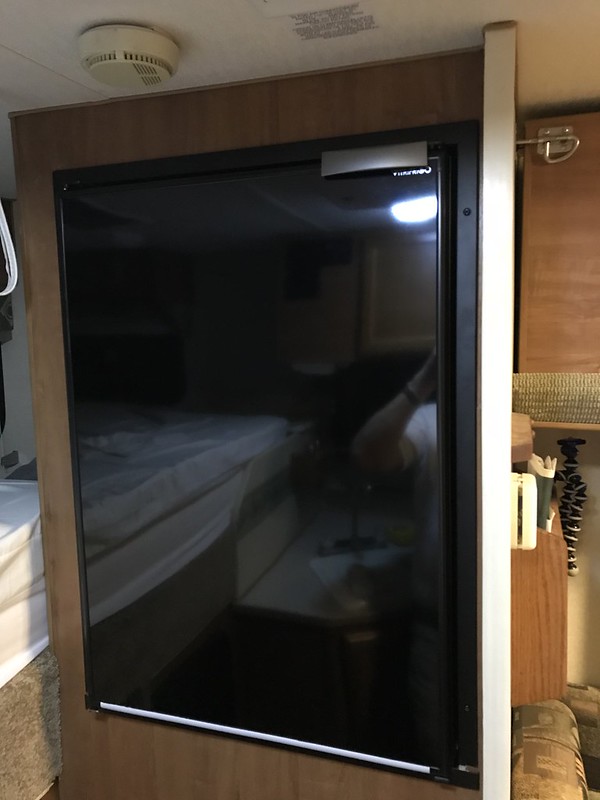 I had similar experiences with the original fridge in a Lance 845. I replaced it with a NovaKool unit 3 years ago and have been very happy with it. It is similar to a Vitrifigo. The extra space is really nice and it regulates temperature far better than the old unit did.

I think you will be very happy with yours.

My Dometic is going on 18 yrs. No circuit board,just knobs. I always carry leveling blocks so leveling isn't an issue. LP is super efficient,AC a bit less but the 12v on the road absolutely sucks on mine.
Looks like a good unit!

Overland: A Mercedes-Benz Journey Through the Americas
by ri M. Stroh
From $20From CAD$47.2

LivingDaDream, nice conversion to a compressor refrigerator, I did the same back in 2013 after I got tried enough of my Norcold 300.3 failing too many times. I went with a Dometic CR1110 (3.8 cu.ft. with a freezer) myself plus I did addition upgrade of my camper wiring and an additional battery.
Last edited: Jan 30, 2019

Regcabguy said:
My Dometic is going on 18 yrs. No circuit board,just knobs. I always carry leveling blocks so leveling isn't an issue. LP is super efficient,AC a bit less but the 12v on the road absolutely sucks on mine.
Looks like a good unit!
Click to expand...

Post some pictures of it! 18 years sure is a long time!

A quick update...very pleased with the performance of this unit so far. I've taken 4 trips of a week or more and though I wasn't boondocking the whole time, it's been great to have the extra space and the ability to maintain a more consistent temp in the refrigerator/freezer...not to mention not having to worry about parking on level ground if I want to stop somewhere for some sleep.