Ever hear about a Commander Attilio Gatti and his "jungle yachts?" Picture a couple of streamlined semi-trailers, set up as luxury living quarters, cruising Darkest Africa in 1938 to 1940.

Here's a picture of one of the rigs on its way from the International Harvester factory where they were built, to New York City. 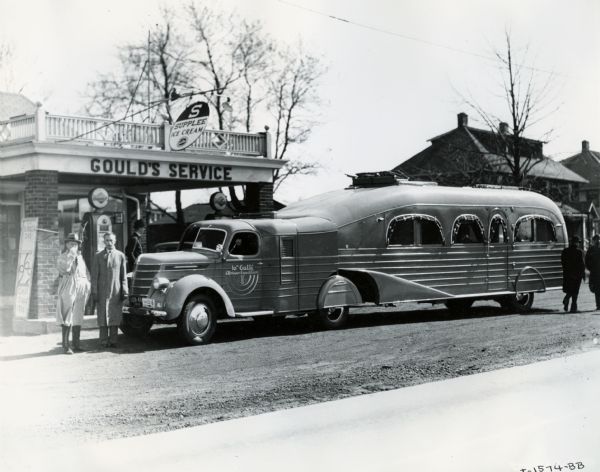 It appears that the truck and trailer are joined with some sort of flexible skin.

This image is from the website of the Wisconsin Historical Society, which has lots more pictures of these unique vehicles.

Coctktail hour in the Congo

Apparently, Commander Gatti was quite well-known in his day and made many expeditions to Africa, publishing extensively.

I found a few pictures of the commander and his vehicles on flickr. com and a skeleton article on wikipedia. The best thing I could find is a short article lifted from an International in-house publication.

I haven't yet searched e-bay or any other places for original source material.

Anyone familiar with the commander or his exploits?

Very interesting. I would like to see how it is connected and how it flexes when steering.
P

Very cool! A quick search turned up this web page set up by a gent from the netherlands: the story of the trip as told by the expedition's two ham radio operators.

There's also apparently a B&W film "Jungle Yachts in the Belgian Congo" on file in a couple university media libraries.

Information on this Hallicrafters expedition seems to be available on the web. I wonder what happened on the earlier expeditions?

it doesnt flex, just fits tight to each other like 2 Cc's, guess there were smooth roads in africa then
H

A few areas probably had better roads than today.

I'm curious about this. Have you found some more information about the design? And please explain "Cc's" as I'm not familiar with that acronym.
F