I've recently started a blog to document progress converting a truck I bought a few years back into a motorhome.

I've posted a few photos on the forum before but I didn't start a thread or blog because progress was so slow. Progress is still slow but I'm resigned that that is how it'll stay. I work full time and have nowehere to work except my back garden and inside the truck so I am at the mercy of the weather and daylight hours.

I did a lot of work on the truck between buying it and starting the blog, so periodically I'll put a post about some of the work I have already completed, to try to bring the blog up to date.

I plan to go on a long trip sometime next year. I had originally planned to leave London and head east to India, and possibly further. This is still an option, but recently I've noticed that the costs of RoRo shipping from Europe to Canda has fallen and so I'm still undecided on where I'll go.

Please post here or on the blog if you have any questions. 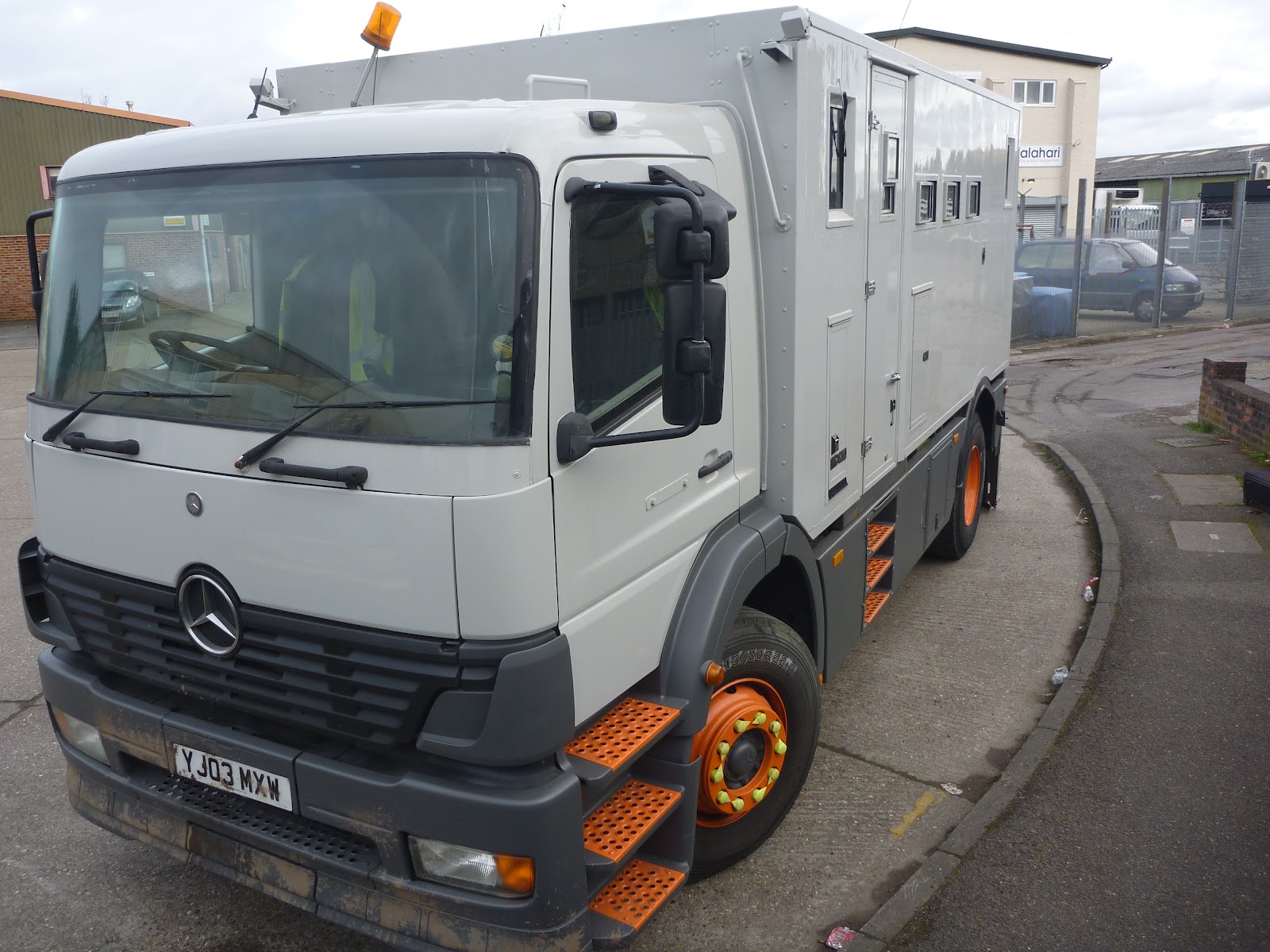 Keep us posted on the progress.
C

I won't lie, Jim the Truck is pretty cool.... would love to see more on the build as you continue it.

The curb appeal in the picture you posted above is terrific. Please let us have more info. and views.
N

JRhetts said:
The curb appeal in the picture you posted above is terrific. Please let us have more info. and views.
Click to expand...

I'll try to take some more photos as I get time, although I've got a few I took earlier in the year for an application for emissions control exemption.

Is there anything in particular you'd like to know?

I'd have kept the revolving door, that was pretty cool....
N

ColinTheCop said:
I'd have kept the revolving door, that was pretty cool....
Click to expand...

It really wasn't! It took a chunk about 75cm square out of the floor space and made getting in and out of the truck a PITA. If nothing else the revolving door was about 120kg of metal I don't need to cart around. Interestingly it had an electronic weighing device underneath it which would prevent anyone except the operator who left the truck from getting back in. There was evidence that they were p*ssing in the truck, presumably because if they took a leak outside there was a danger they couldn't get back in!

It has left a usefull legacy though, there is a 25cm deep sump under the entrance which stored the bearing on which the door rotated and stored the weighing equipment. I have now made a step there to make it easier to get into the truck and have a large storage area in which I'm mounting a webasto water heater. Above the door is the only place in the truck which is only a single skin roof as this area needed the height to house the sprocket that allowed the door to be powered via a chain drive. In this 75cm square area there is an extra 5cm of headroom in which I am mounting a fold down screen I can watch movies on!

I wish now that I'd taken more photos when I was stripping the truck out but I had no digital camera then.

I was tempted at one stage to turn the revolving door into a shower room but it was such a small diameter that if you dropped the soap your knees would hit the walls if you tried to bend down so you'd have to get out of the shower and pick up the soap from outside.
A

I remember seeing the fleet of Brinks trucks all around Shoreditch (where they were based) though I'd never thought of one as a camper!
N

When you get to California, I hope you come visit.
Click to expand...

I'm still undecided about whether I'll be shipping to canada for a trip through the Americas, but if I do, I'll certainly get in touch.

Is is still armoured?
G

Nice truck! Have you any idea yet how many mpg?

I recently bought a set of steps like that from someone else who wanted one but had to buy a few! Bargain for me! Each leg adjustable for height, nice flat steps, gentle slope, just how I was going to have to get expensively built at some point!! :wings:
N

In some places yes. The construction of most of the box is fairly standard, using a 50mm deep steel frame, clad on the outside with plywood walls and an aluminium roof. The difference is the internal cladding, at the back of the box the walls are 3mm steel and 3mm aluminium and the ceiling 3mm steel. But at the front, there is a cladding of 3 or 4mm armour steel. This stuff is a comple ******** to drill and so I presume it is more bullet resistant than mild. The same stuff is used throughout the cab, there is a full solid internal cage of the it, with the only apertures being the windows and the walkthrough to the box. The armour steel is also used to line the bonnet, and the area around the front of the cab. The cab side windows and the windscreen are also bullet resistant, being around 15mm thick (difficult to tell).

When I get time I will remove some of the easy pieces in the front of the cab, but the internal cab cage is welded in situ and so that is staying. I quite like the added security of the windows at the front, but it is a pain not being able to open the cab windows. The air con is good, and there are loads of windows and roof hatches that open in the back, but I forsee problems in really hot countries where the air con doesn't keep up and I cant get a breeze across my face.

I have replaced the armoured side and rear doors in the box. Both were ridiculously heavy and had dropped a few mm on their hinges, making them a pain to operate. They both had 24v solenoid operated sliding bolts, and electro magnets, in addition to the manual 3 point locks. I have also removed the bulkhead between the safe section of the rear box, all back from the side door, and the front operators section. I reckon I removed about three quarters of a tonne of steel before putting any weight back.

grizzlyj said:
Nice truck! Have you any idea yet how many mpg?

I recently bought a set of steps like that from someone else who wanted one but had to buy a few! Bargain for me! Each leg adjustable for height, nice flat steps, gentle slope, just how I was going to have to get expensively built at some point!! :wings:
Click to expand...

TBH I've not really calculated. The main tank gives me about 1000 miles so by the time I get to the end of a tank I forget where I wrote down the starting mileage. When I start doing longer travels I'll work it out properly. From some quick calculations I did when I bought the truck, I reckon I'm getting about 13mpg on longer journeys. Diesel will get fairly expensive when I'm driving long distances but I have 650 litres of storage in the two chassis tanks (without any jerry cans) so I can fill up where fuel is cheap and drive through the expensive areas.

The steps are great. I've seen single sets going on Ramco auctions since I bought mine though. I don't regret buying the eight though because whilst I was at Withams, I bought a almost unused Tirfor winch (3.5 tonnes) and 20m of cable for pittance, and with it came three unused 5 tonne exhaust jacks. I sold the exhaust jacks for most of the cost of everything together.
N

I recently got Jim back from Brownchurch who made a roofrack for me. It supports the heavy awning and I'll fit eight 100w solar panels to it when I've run the wiring for them. It's made from steel angle and was hot-dip galvanised. I've got some 12mm buffalo board (birch plywood with a textured laminate surface) to cover the unused areas with, and I'll make up some covers out of the same stuff to cover the roof hatches if I ever need to ship Jim anywhere.

Here's the blog entry with some background information: 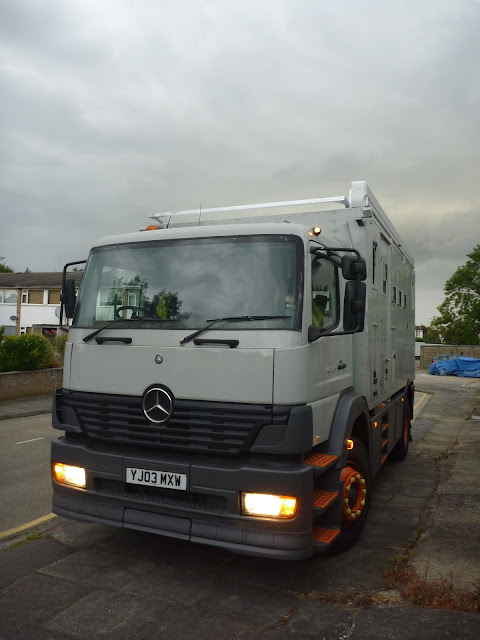 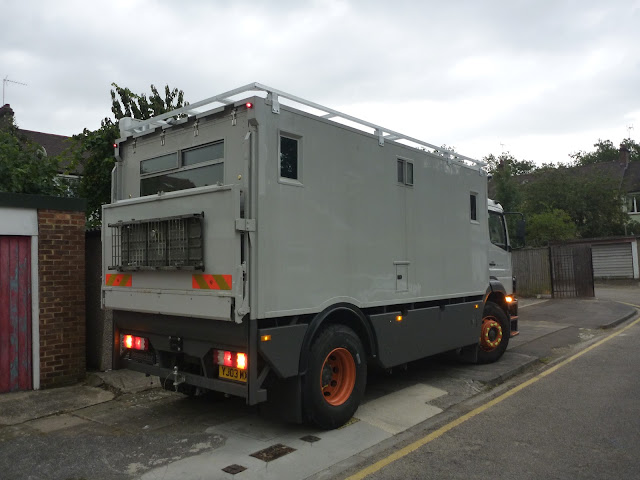 It's looking good, I opted for the Brownchurch rack for my Discovery and was very impressed with the quality and service.
N

I've all but finished the nearside bench seat. There's a small bit of cladding to complete over the electrical locker, the teak needs a final coat of varnish, and it obviously needs upholstering. I'll probably leave the upholstering until most of the dirty work is finished.

I'm impressed with the Lagun table so far. Thanks to Earthcruiser for the idea! 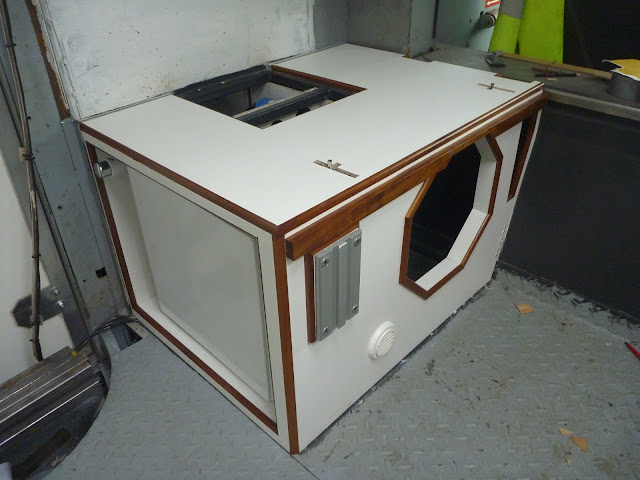 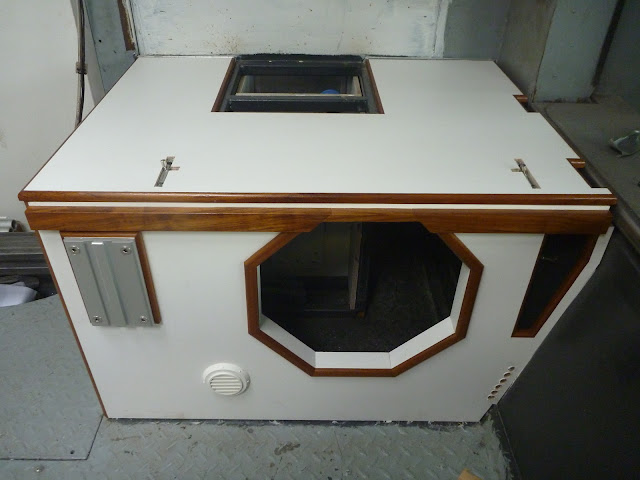 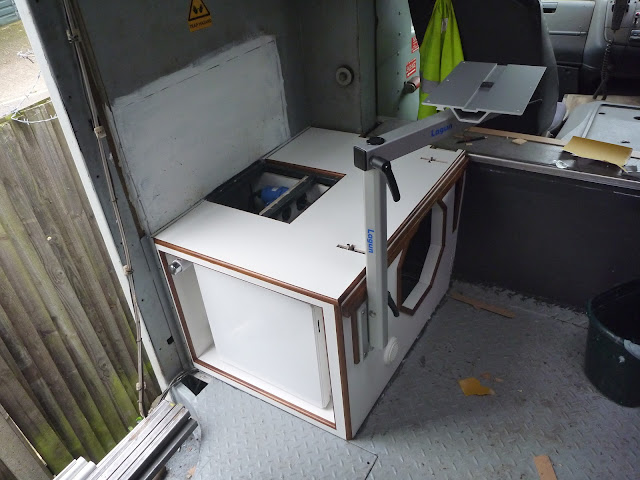 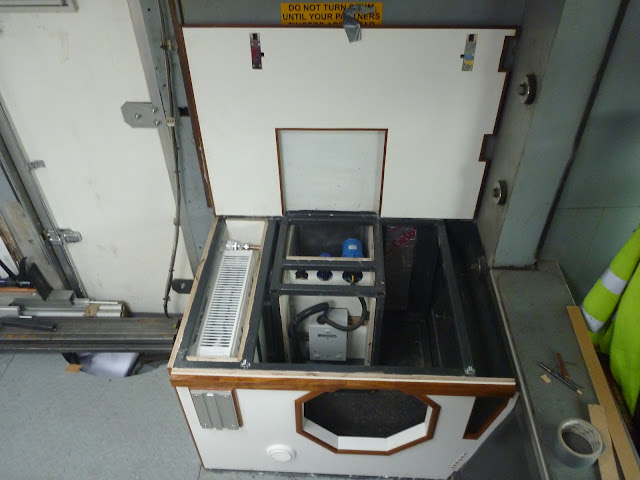 Here's the two blog posts I did on the seat: