Hey guys, been a lurker for years on this forum, which there has always been great information to take away from here no matter what type of off-roading you do. And for years I have been a "rock crawler" here in Northern California
This time I decided to head a different direction with a build of something I've never done. I have been "hook line and sinkered" into the overland world. I have mostly always been a Jeep guy (27 years as a Jeep technician).

I picked this up with intentions of making a mild build being my daughter will eventually be taking it as her high school back and forth. It is a 2003 TJ , and I have all intentions of making this a budget build as best as possible. Hence the name SHOESTRING Picked up the Jeep for $4500, as it is in the first pic. The 33" tires were shot, the soft top had seen better days. But overall, for a 192k miles on the clock it was pretty darn clean. The Smittybilt 8k winch works, the garvin rack works for what I'll need. The ProComp 4" lift is little to be desired till I find a better lift that won't break the bank.

The build up so far has been pretty darn sweet on the pocket book! Picked up the 5- 35" K02's for $800, brand new soft top for $200, and the Smittybilt RTT for $400 which was also brand new, never used! As far as how I installed the RTT, I can stand uder it with no problems, I'm 6'4'". I don't know yet if I'll keep it in that direction. But for now, it'll aslo help with coverage while working out of the back.

Next on the list of "to do's" will be designing a building rear storage with the ARB fridge (I've had the fridge for years) I plan on making the rear storage area "convertible" as in, when I have my kid and wife I will be able to remove the right side where I plan on having the drawers removable and I'll have a single seat mounted with integrated seat belt in the seat mounted to the floor. I have found the seat that I want to use, but need to find one that someone isn't asking a arm/leg for. And soon I'll be getting a rear dana 44 and get rid of the crappy dana 35 in it now.

The challenge is storage for sure, not much room in these Jeeps, but it makes it more fun having the challenge of making it work. I have had the Jeep now for about 6 months, and as of now it doesn't get driven much. This will be a very slow built as time and $$$ allows. But really excited to get out (far away from civilization) with the family and do some exploring to places we've never been!

Nice looking TJ! I too am dealing with the lack of storage in the rear. I'm in mid-design on a single large drawer+cabinet (no plans for a fridge). The roof rack and RTT are nice too - dont see that too often on a 2-door Wrangler. I look forward to seeing your updates.

Great looking TJ! They are great platforms but I can see the space being limited as an issue. I am curious to see some ideas.

Thanks guys, I've thought about ditching the lack of storage problem by building a trailer for most everything. But that would be one more registration to pay and one more trailer I have to store somewhere. It's been fun so far. I found a JK set up (granted JK's are longer/wider) but the platform the guy had was perfect. I'll try and post the video

Fine looking TJ you have there! I have a 98 TJ and I did build a cheap storage platform in the back for our fridge and our kitchen storage. Space is a premium in a TJ. I have had mine for 14 years now and I wouldn't think about selling it! Best of luck with your build...

I'll build something very simular to this but just the opposite with drawers on the right, fridge on the left side. I'll have it where the drawers are removable so when I have my wife and daughter along I'll install a 3rd seat and still have the fridge.

Beentheredoingthat said:
Fine looking TJ you have there! I have a 98 TJ and I did build a cheap storage platform in the back for our fridge and our kitchen storage. Space is a premium in a TJ. I have had mine for 14 years now and I wouldn't think about selling it! Best of luck with your build...
View attachment 442269 View attachment 442270
Click to expand...

Thanks Beenthere, I have a design in my head how to do a drop down tailgate table surface. It'll have 2 shelves "upper and lower" that will fold into itself on hinges and a latching mechanism while stored.

Been a while on updates..........with the continuation of "project shoestring" I have picked up a few new things on the cheap or free (thanks to really good friends in great places)

Picked up a Smittybilt hard top that I came across on Facebook market place for $250! I didnt even try and haggle the guy down. It was pretty oxidized but in overall great shape. Scrubbed it down and re-shot it black. Came out great

Also, I am good friends with the company Metalcloak, although we've helped each other out over the years being I am a Jeep dealership technician I've helped them with company vehicles issues. But for the most part, we are good friends. Matson decided to sponsor me with front and rear bumpers with a tire carrier. I'll say this and not just because were friends, Metalcloak is a excellent company that puts customers first. If you own a Wrangler of any year, if you have never dealt with them you need to check them out. Quality products and even better customer service. I've never heard any bad words about them

Then finally another good friend of mine that is a warn rep hooked me up with a Warn VR8000 winch with synthetic line. 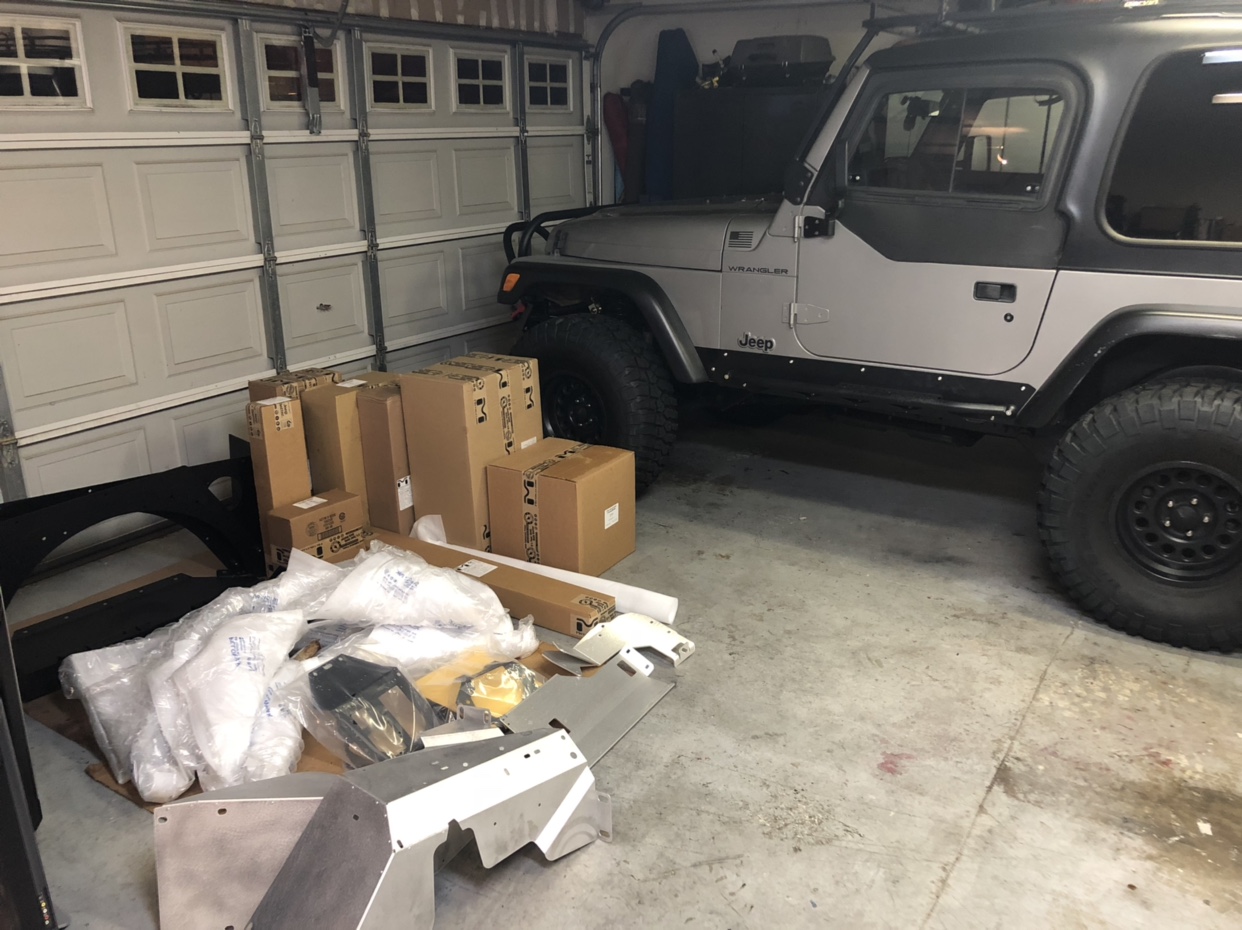 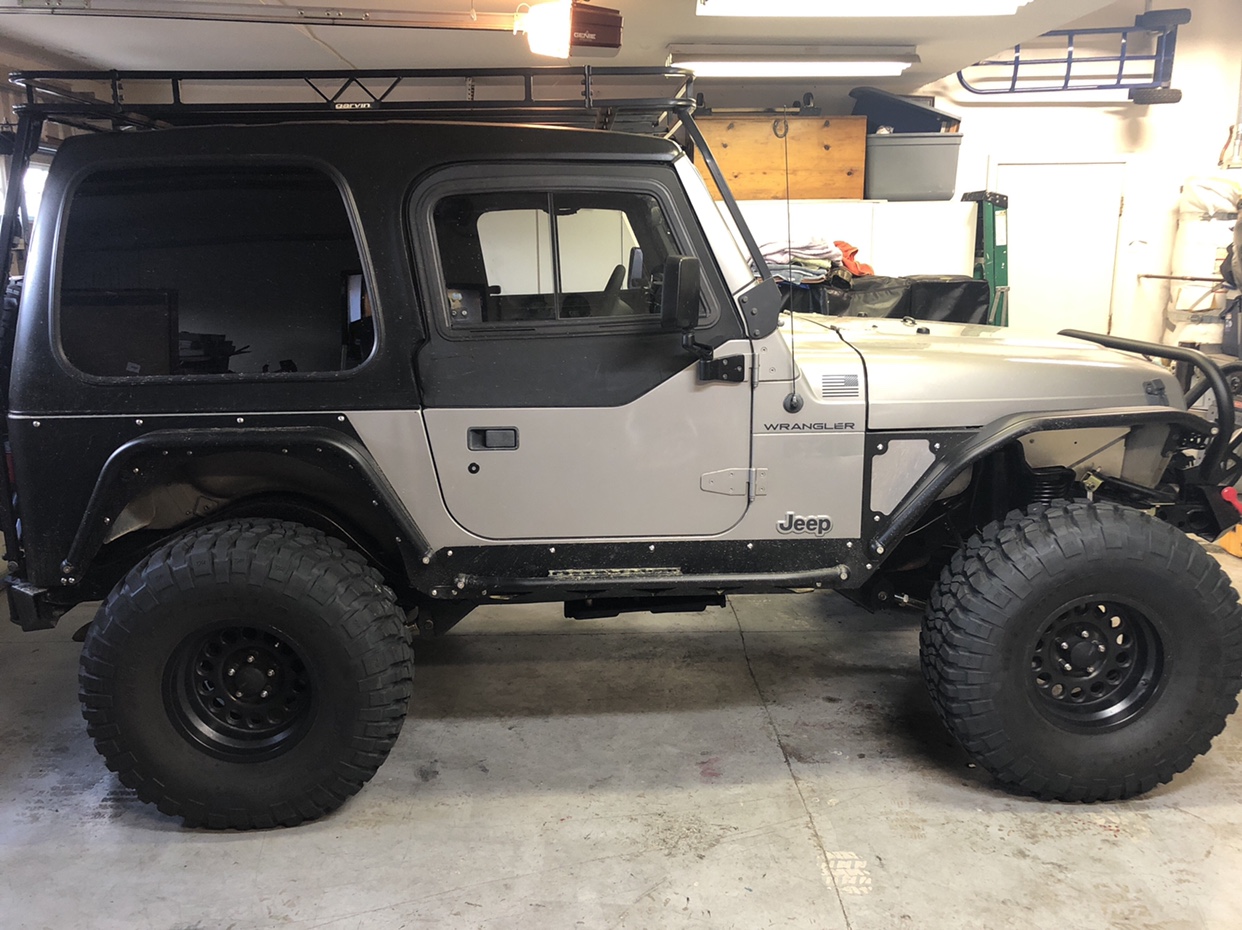 Back in November ‘18 I signed up for a 5k giveaway contest with Metalcloak and I won! Spent the next few weeks trying to decide what I wanted to choose out of all there awesome products. I decided on a 3.5” lift kit, overline front fenders, rear crushed corners, 4” flairs, gas tank skid and a couple other miscellaneous things. I am extremely thankful for Metalcloak choosing me and happy to share with you all their top notch products they manufacture for all Wrangler platforms. And I am super happy with how much better my Jeep rides now. It had a 4” procomp lift that ride horrible and made all kinds of noise.
Metalcloak was sponsoring a local race and asked if I would bring my TJ out to show off their products to the race fans. 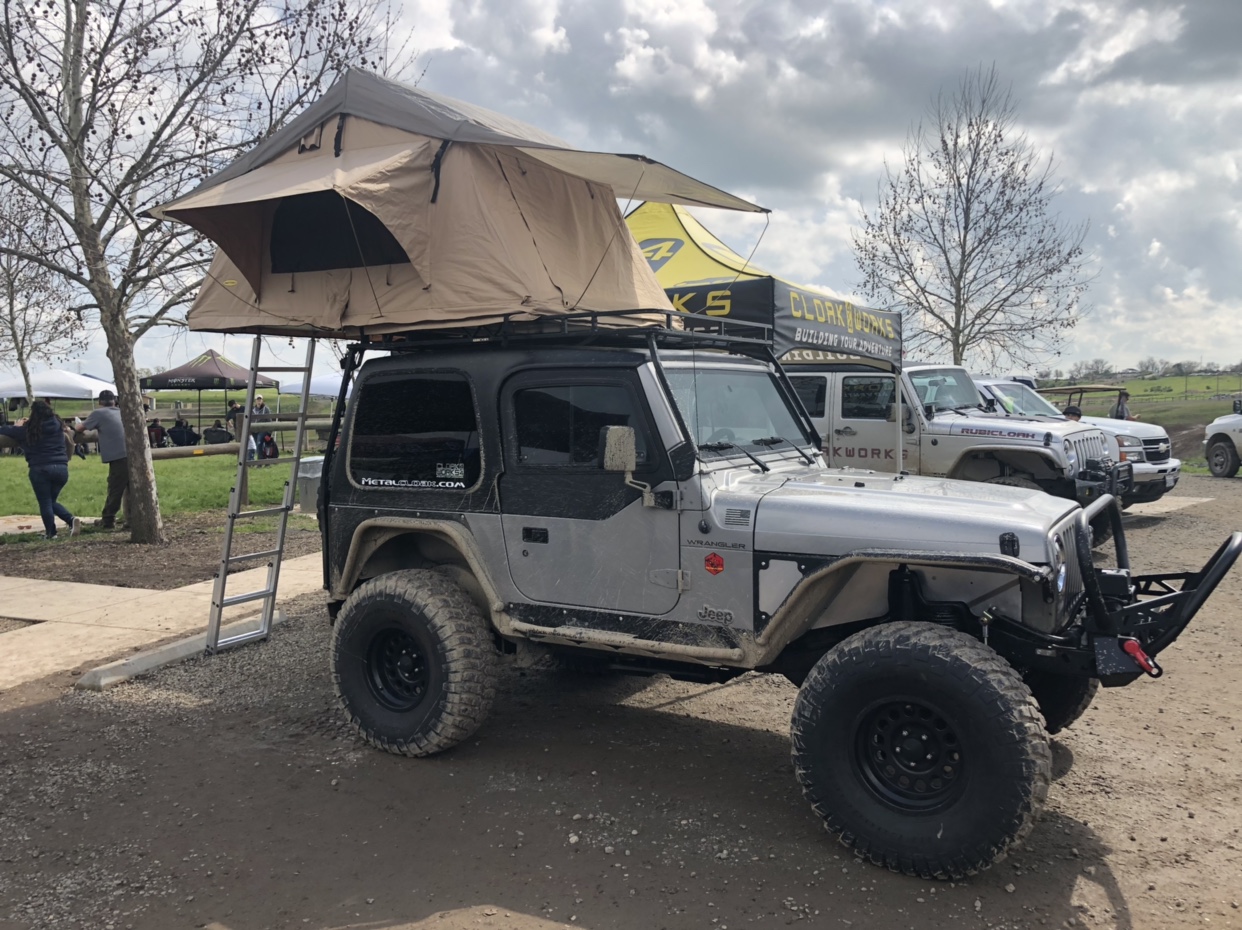 Now that good weather is here, time to get out and use it

What kind of rear tow points do you intend to use?

What kind of rear tow points do you intend to use?

Thanks!
I don’t have a back seat in. I’m usually by myself but do have the passenger front seat open if my daughter or wife wants to go. I’ve thought about getting a trailer but that means one more registration and another thing to keep around the house that I don’t have room for

Removing the back seat is usually my first "mod" upon getting a "new" old Jeep...folding it still uses too much room... storing it is a different problem.

Not an RTT fan but yours is near perfect. I've been driving Wranglers since '88 and CJs before that, I'm finally converted, the Wrangler is not too small...... we just pack way too much shiiit. Reduce the inventory and go.

And I understand the minimalist thing. But me, my TJ is my daily driver. When I go camping nothing on the TJ changes. I hook up a home built "tear drop" actually a BOX of OSB and go. Definitely a "shoestring budget". I had an open trailer. The box cost less than $800.00 if I had bought ALL new. And it costs $106.00 to license/insure. I like it because I can hook up and go in 5 minutes. And there is zero setup. Park, roll into bed. Raining in the morning? Roll out of bed and drive.

But you have a great trailerless camper. I just hate tents. I love Meral Cloak. I bought one of the last AEV HighLines. And I hate how they gave up on TJs. The downside of an engineering firm vs a marketing company. Metal Cloak sems to be there long term, like BestTop.

Love your build and I'm starting a budget build right now too. Weekend camping rig with roof top tent too. Right now I have too much weight and I haven't even mount my RTT and roof rack yet. I'm using Air lift 1000 with the rear end sag and that helps as long as I stay on the road and not offroading with heavy articulation. I noticed my air lines get pinched and breaks. 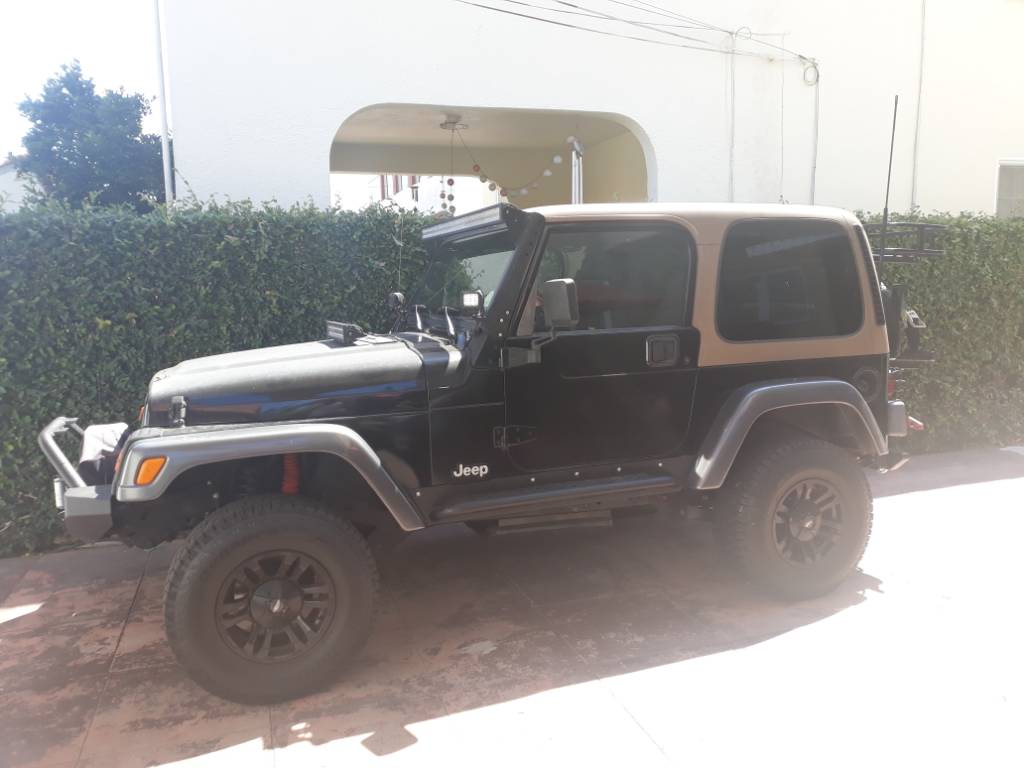 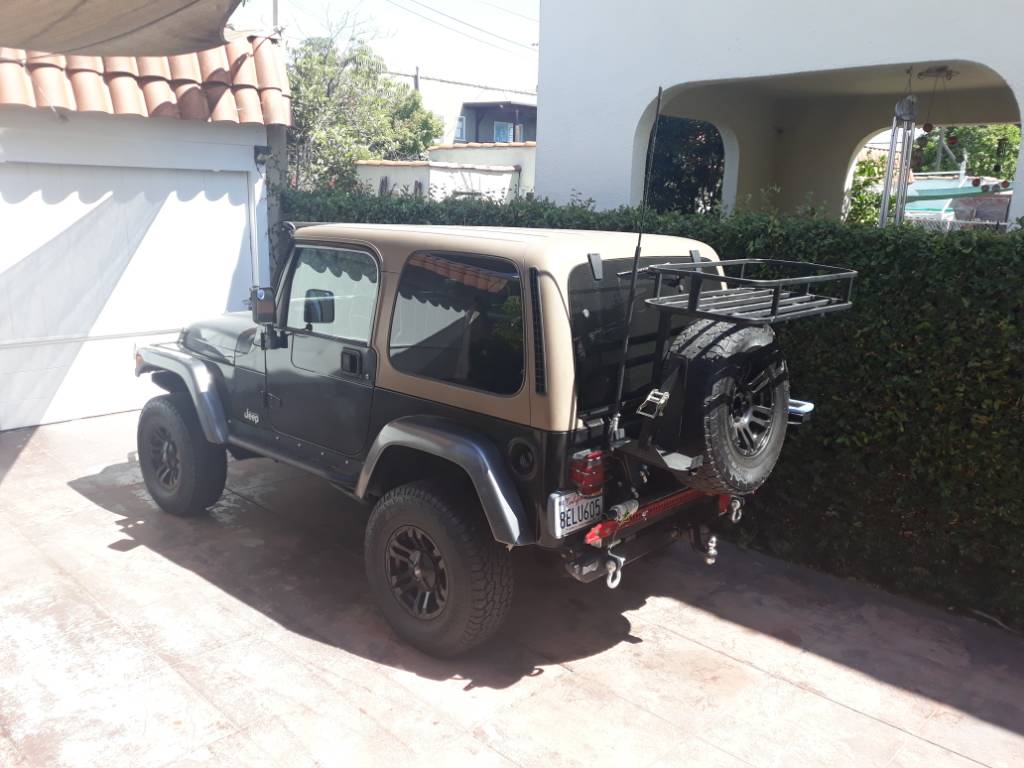