Well being as there’s no thread for show us your weird JDM Toyota, figured I’d post up here.

The details on the truck: 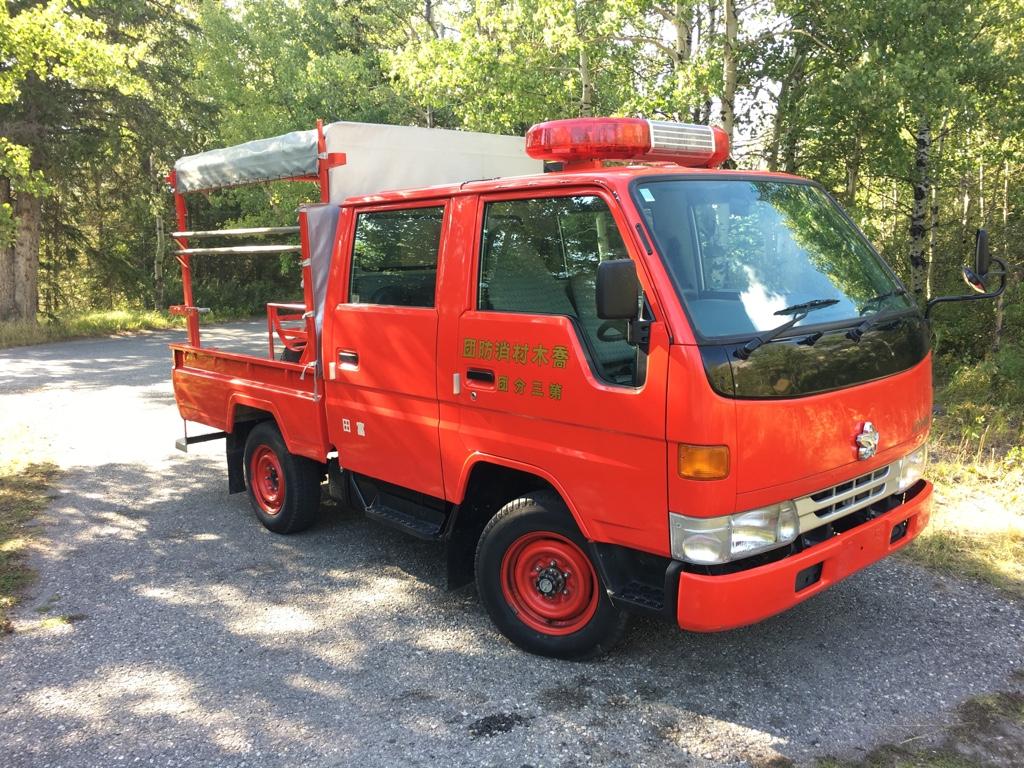 The picture above is from the day I picked up the truck. I imported the truck from Japan just over a year ago, it’s a retired fire truck. Came with lights, sirens and all! Been a bit of a project vehicle to turn it into an overland rig but so far progress has been good, albeit a little slow.

The truck is a 2000 Toyota Dyna (Sometimes referred to as a ToyoAce or HiAce Truck depending on the market.)
Quite the burly little truck, it’s 4wd with manual locking AISIN hubs and push button engagement. It’s a 5spd manual transmission with 4H and 4L. It has a naturally aspirated diesel 3.0L inline 4 engine (Referred to as a 5L engine). IFS front suspension, solid rear axle, and according to the manual, the chassis is rated at 1.25 tonnes!

The truck is the four-door version which seats 6 and comes with a 6.5’ box. It’s pretty basic inside with manual windows, locks, seats, etc., but did come with air conditioning which is a bonus! The best part is, there was only 12,000kms on the clock when I got the truck. It has lived its entire life in a garage so not a speck of rust on it either.

Being as many ask, the truck handles well on the highway despite the old Diesel engine and lack of a turbo. The truck cruises along at 110kph without much trouble and can be pushed to 120kph but the rpms start to get a bit high. It slows to 80-90kph on big hills and mountain passes but otherwise is reasonable for highway driving. I average around 23mpg which isn’t bad at all for a truck with an old-school diesel engine.
I have a separate build thread for the camper which I will start updating in the coming weeks but will post the truck related work here.

A few pictures before any modification: 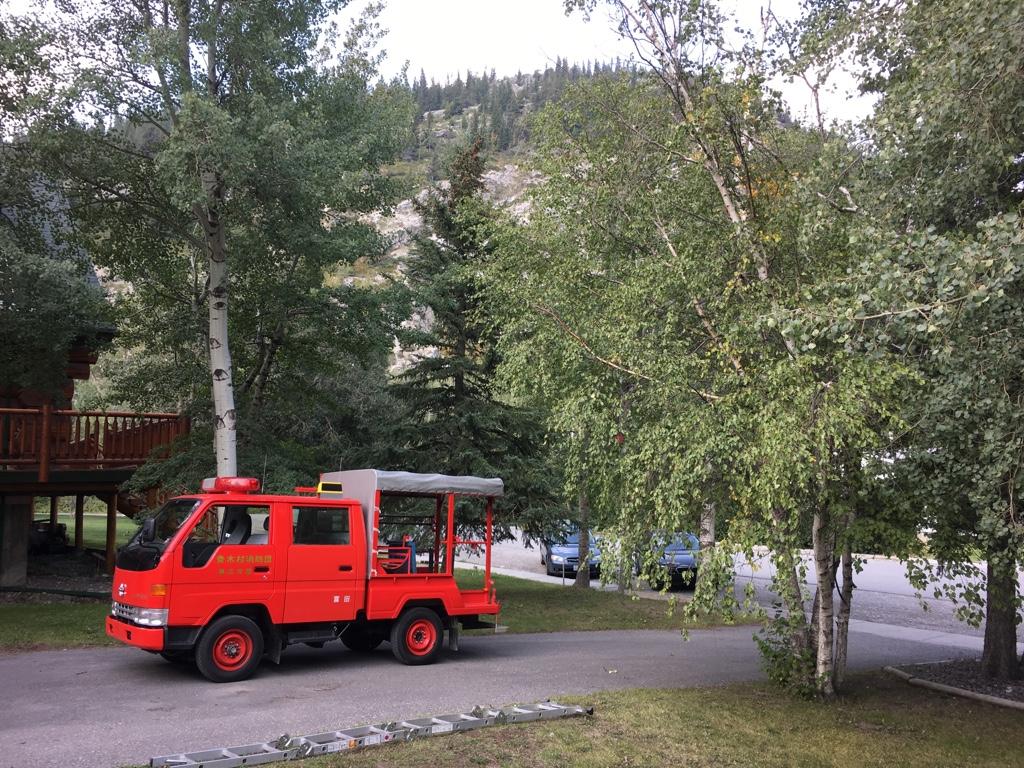 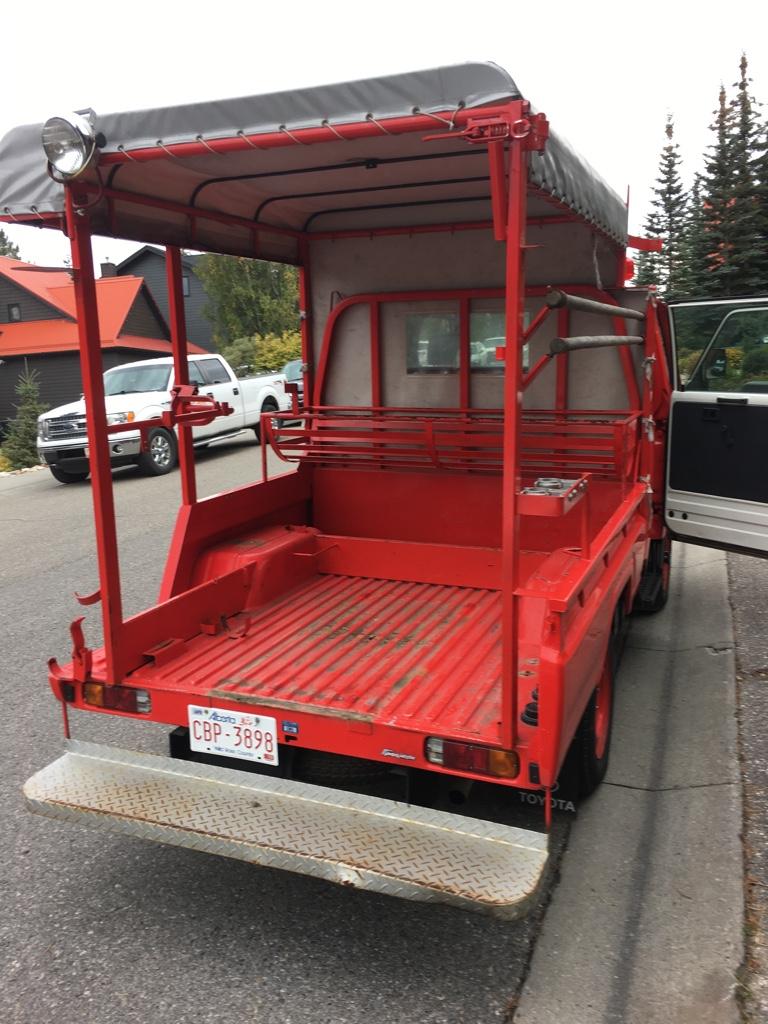 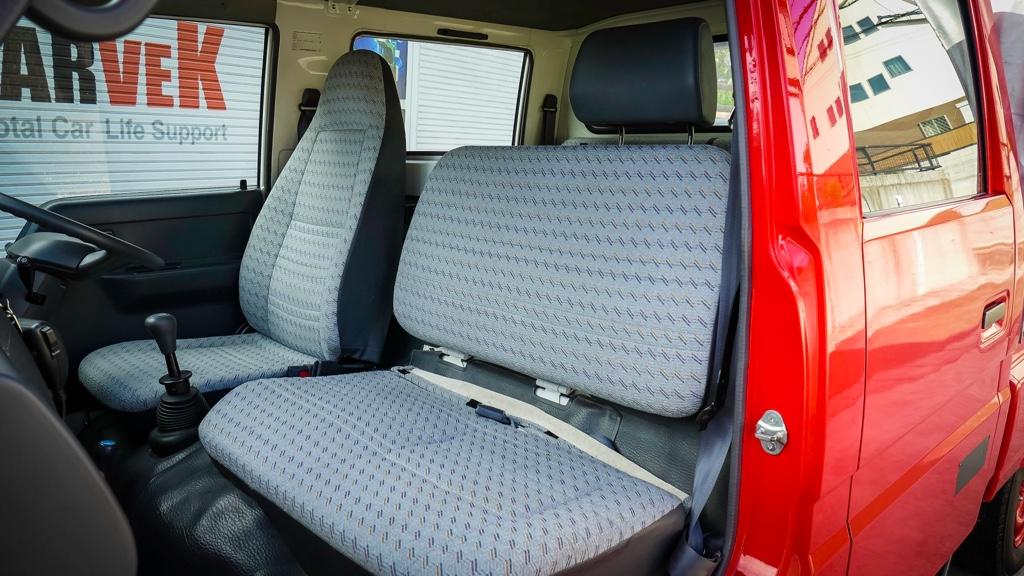 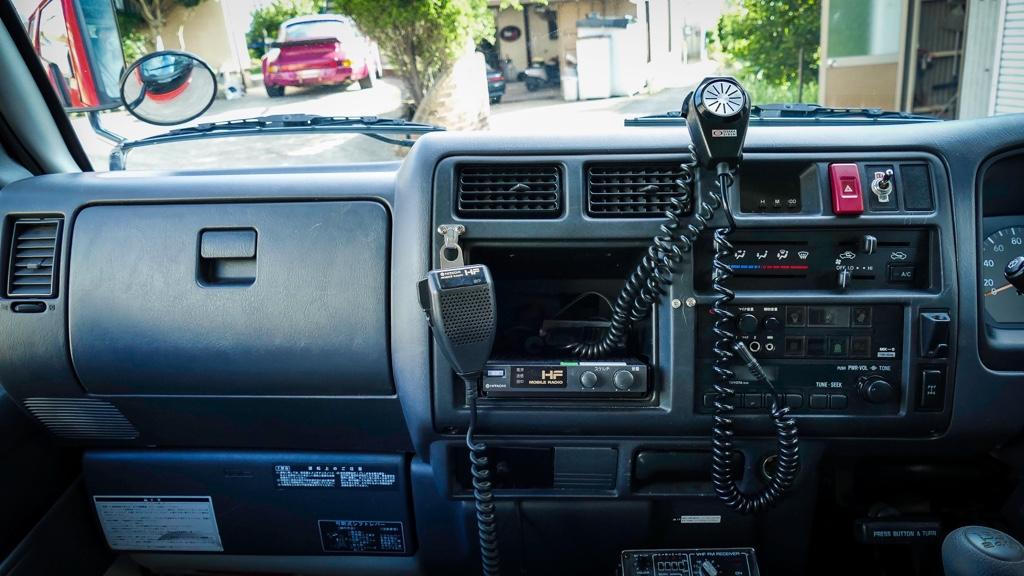 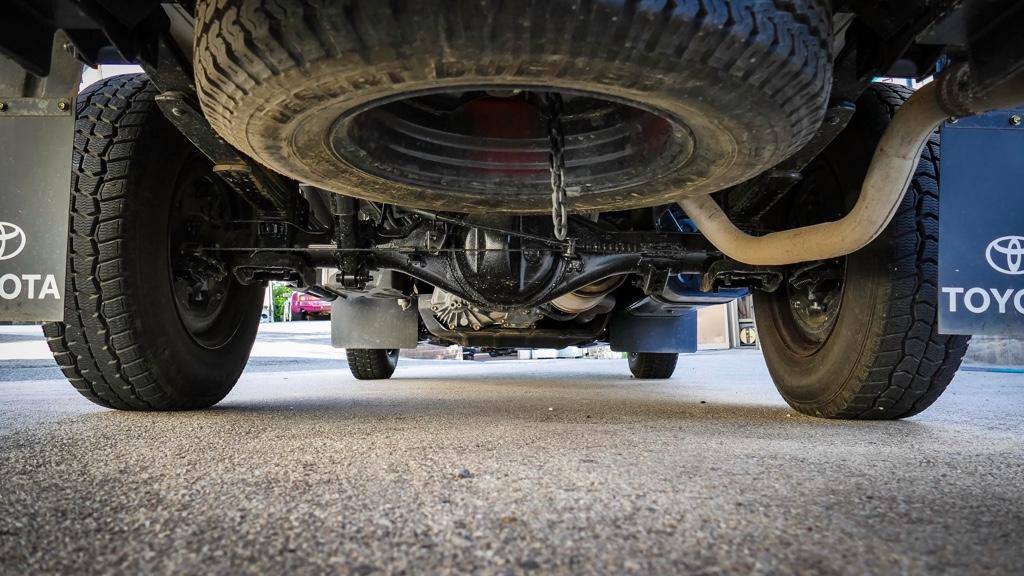 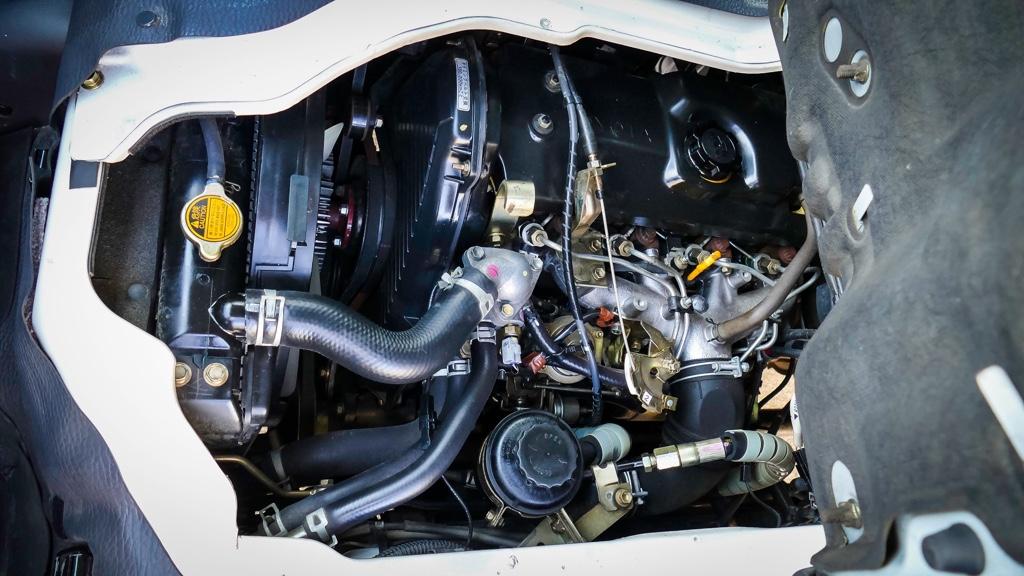 Tarp canopy removed and ski box added ready for its first road trip to Utah! (I live in the Banff, Canada area) 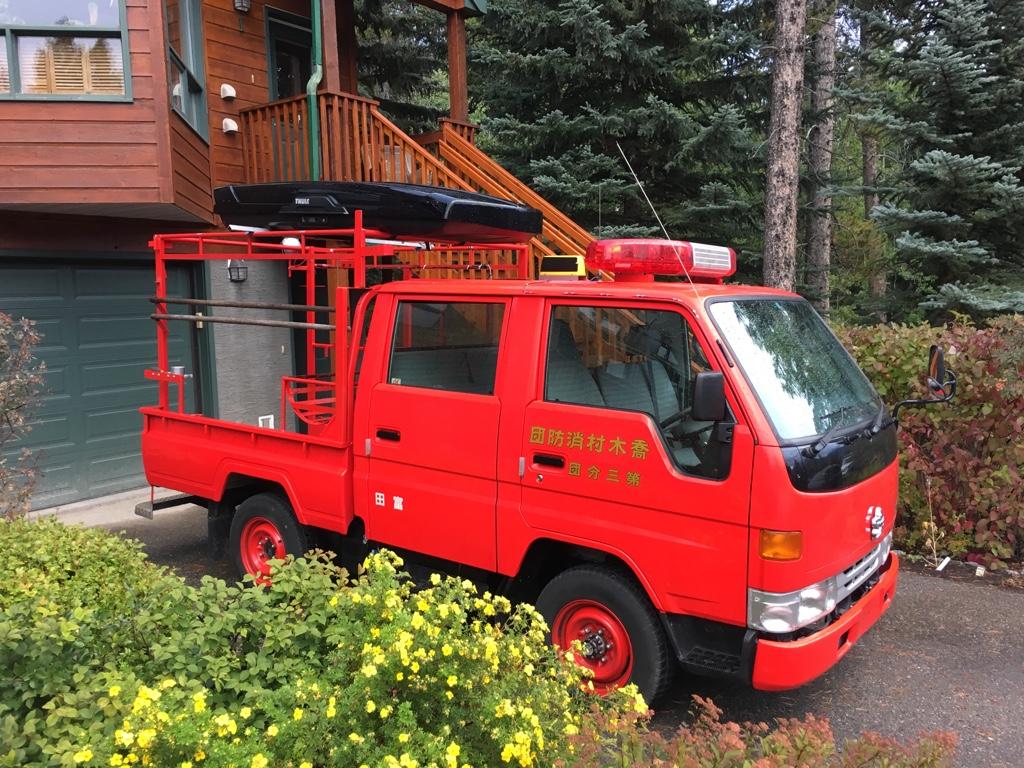 With 4runner wheels/bigger tires added which made a huge difference for the look and feel of the truck: 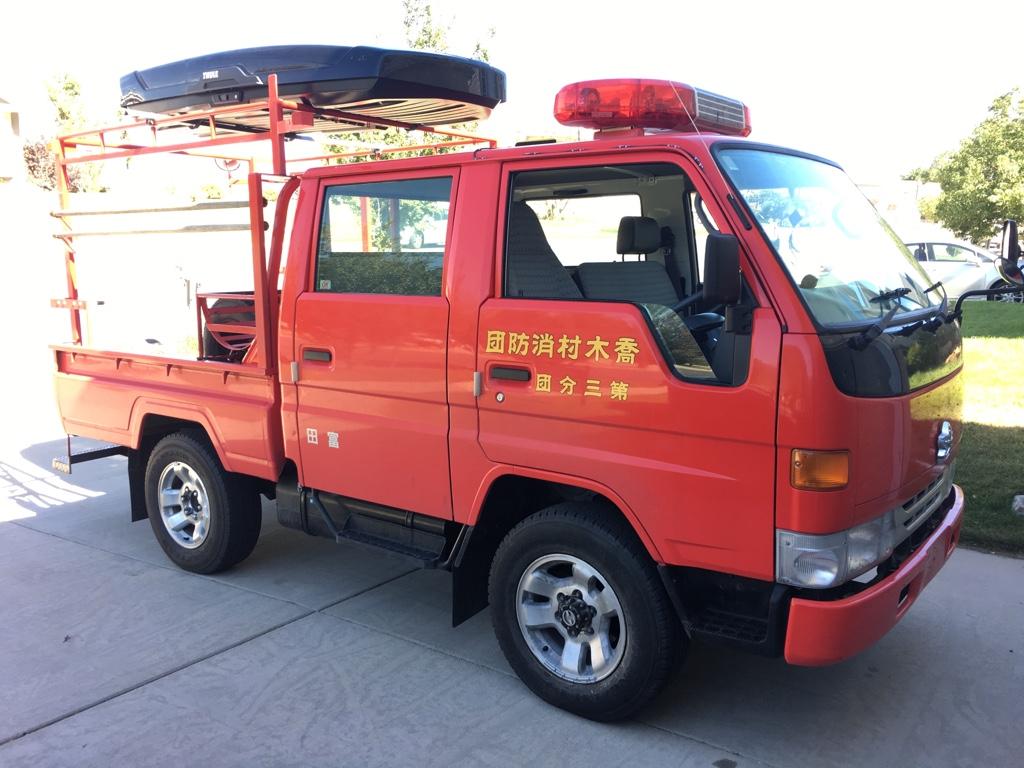 Starting to get a feel for adventure... 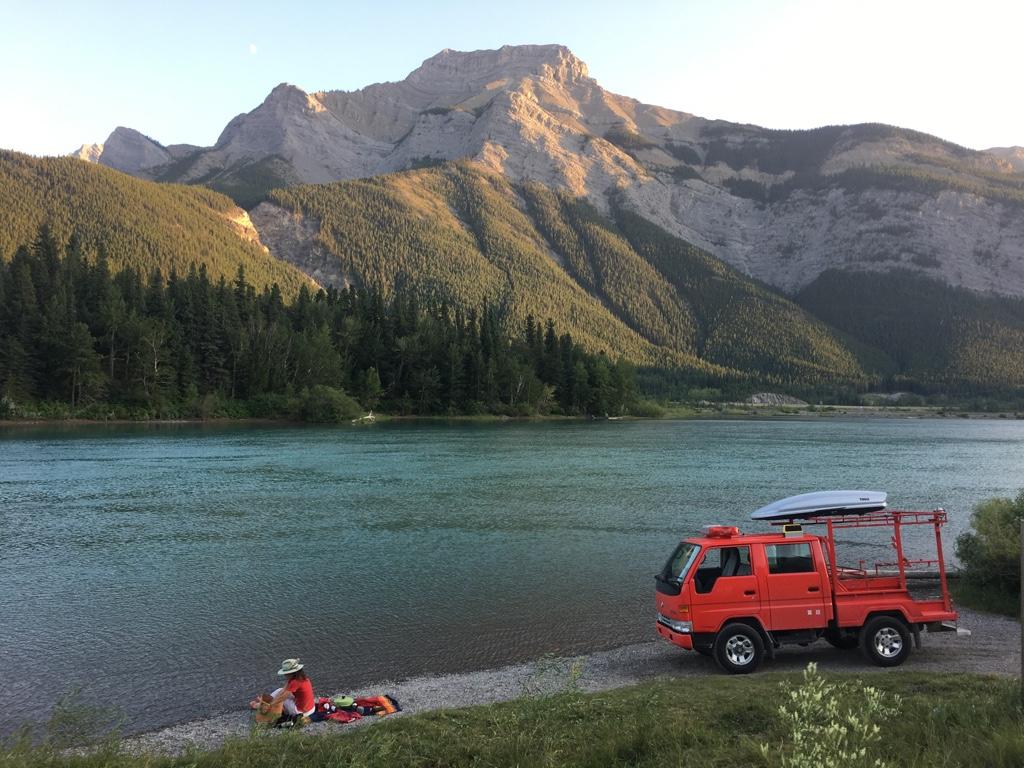 Metal framing stripped off the back and roof rack installed over cab: 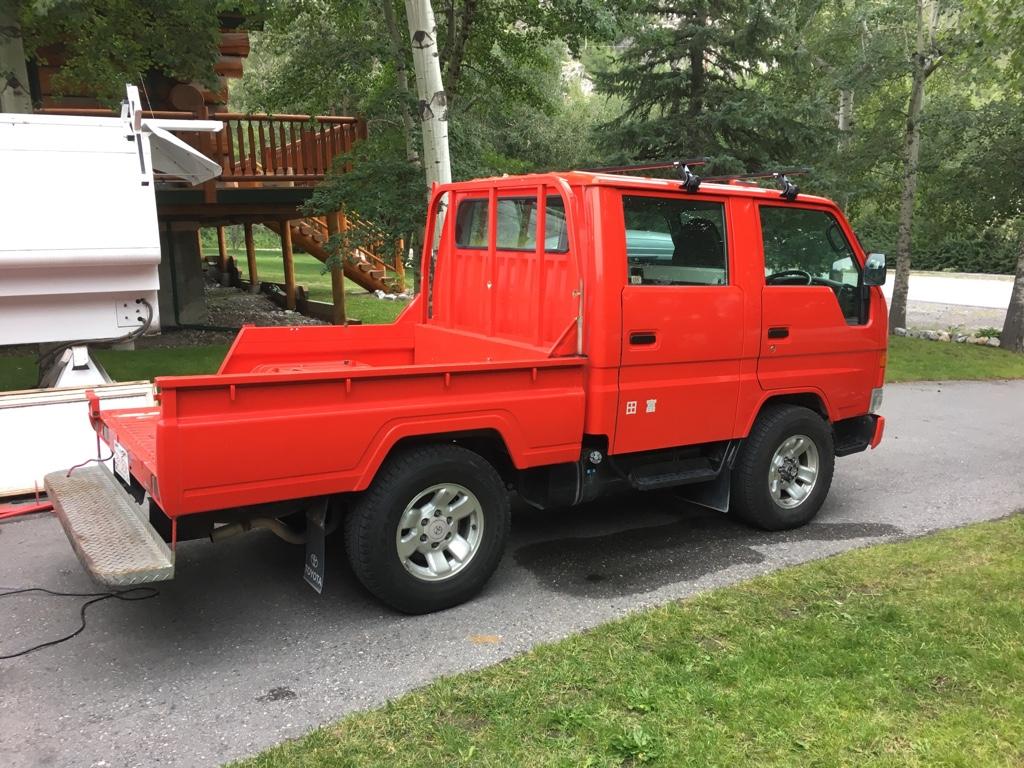 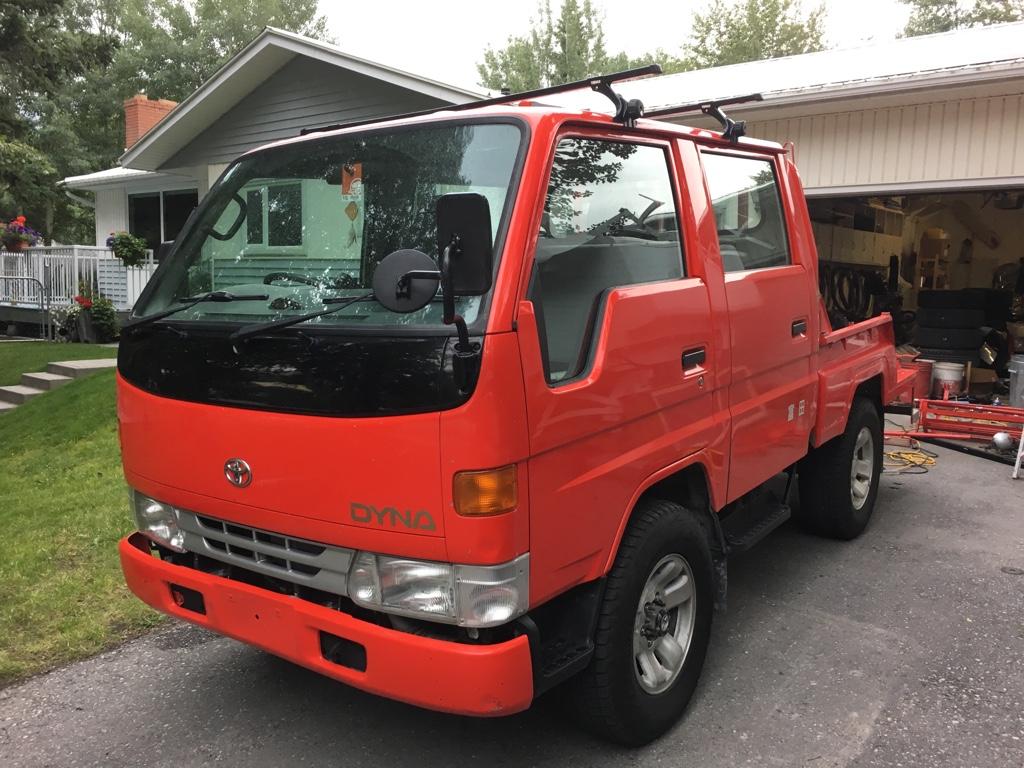 And the camper shell being test-fitted: 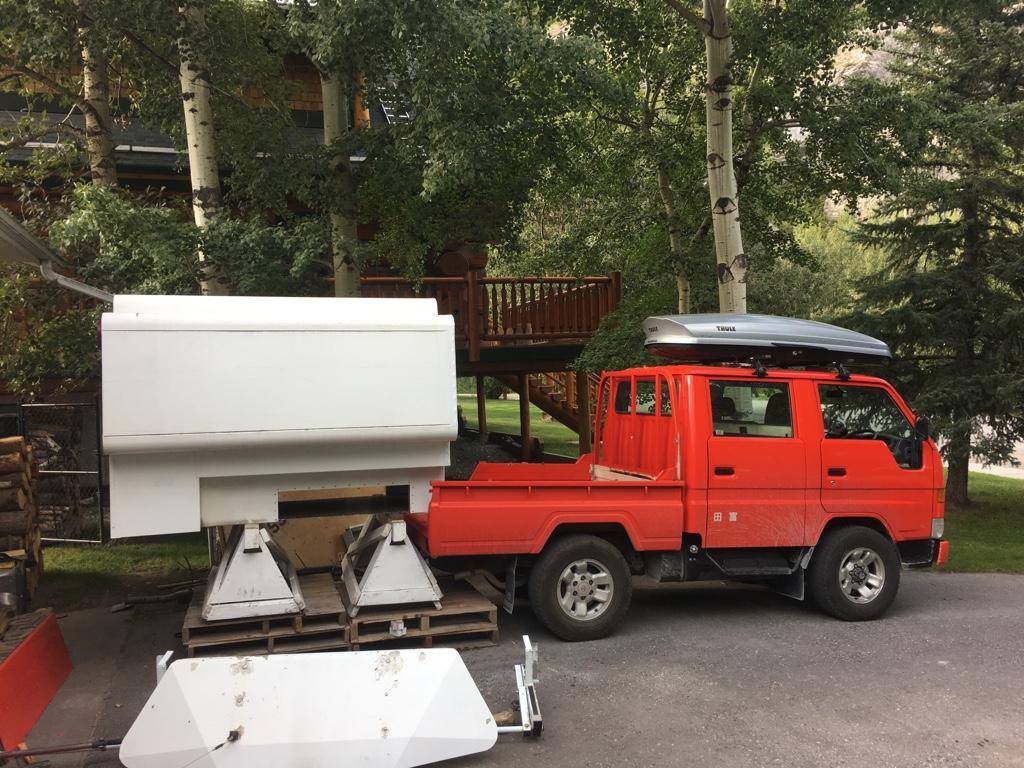 Camper on and ready to try it out on a road trip: 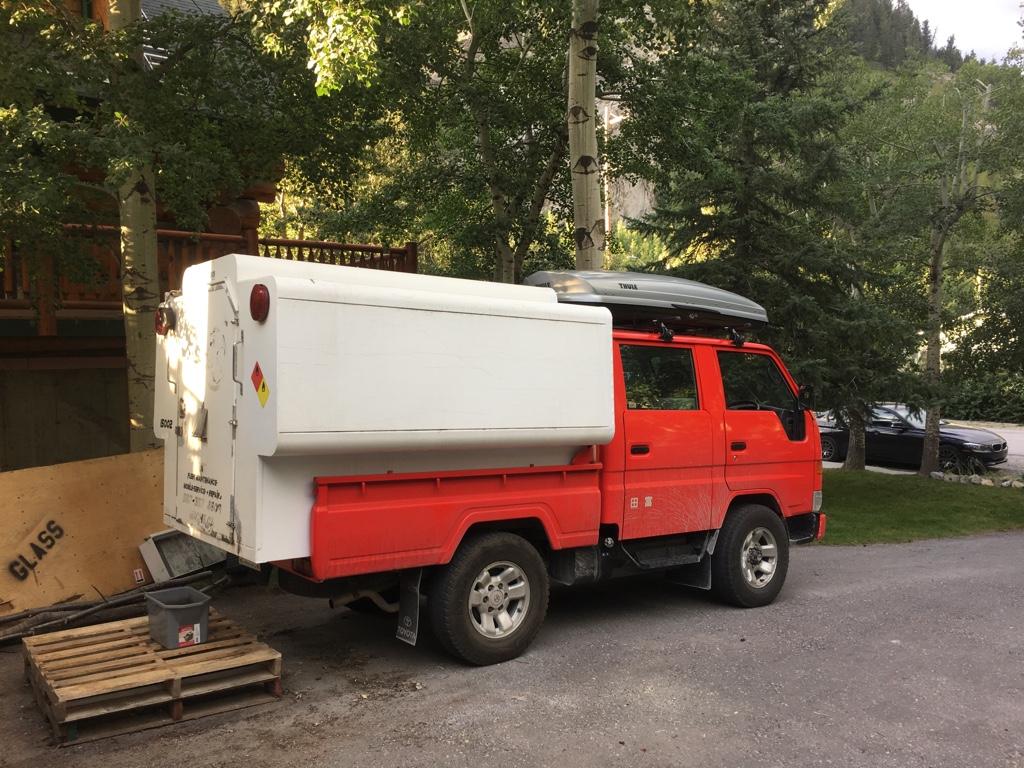 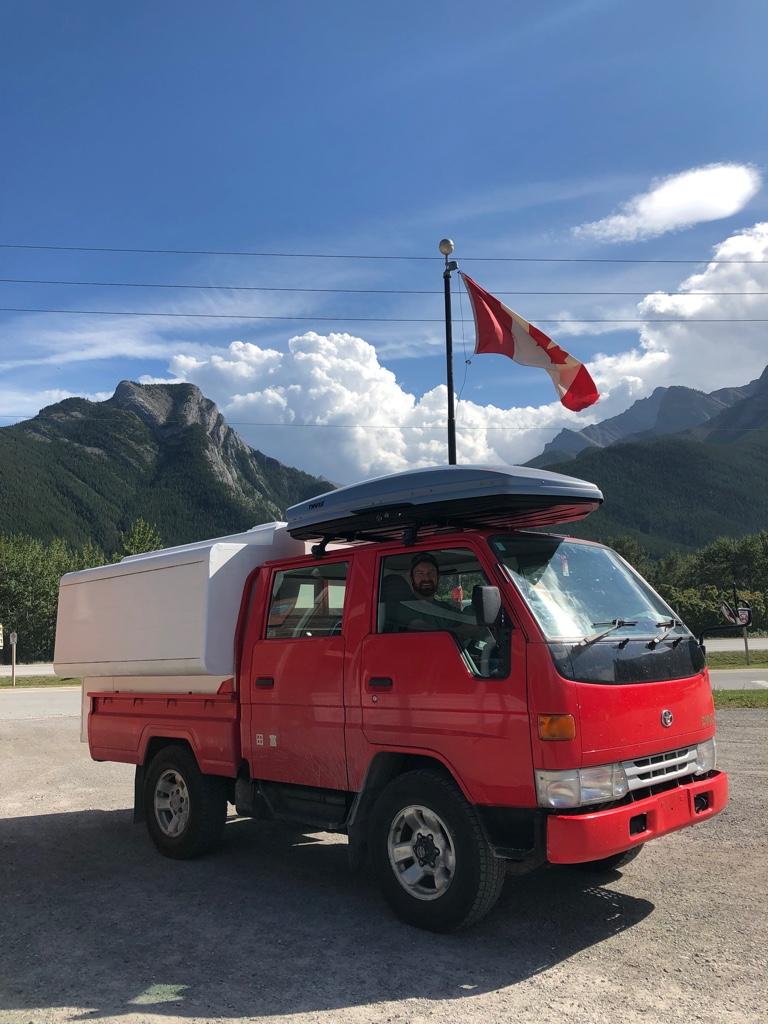 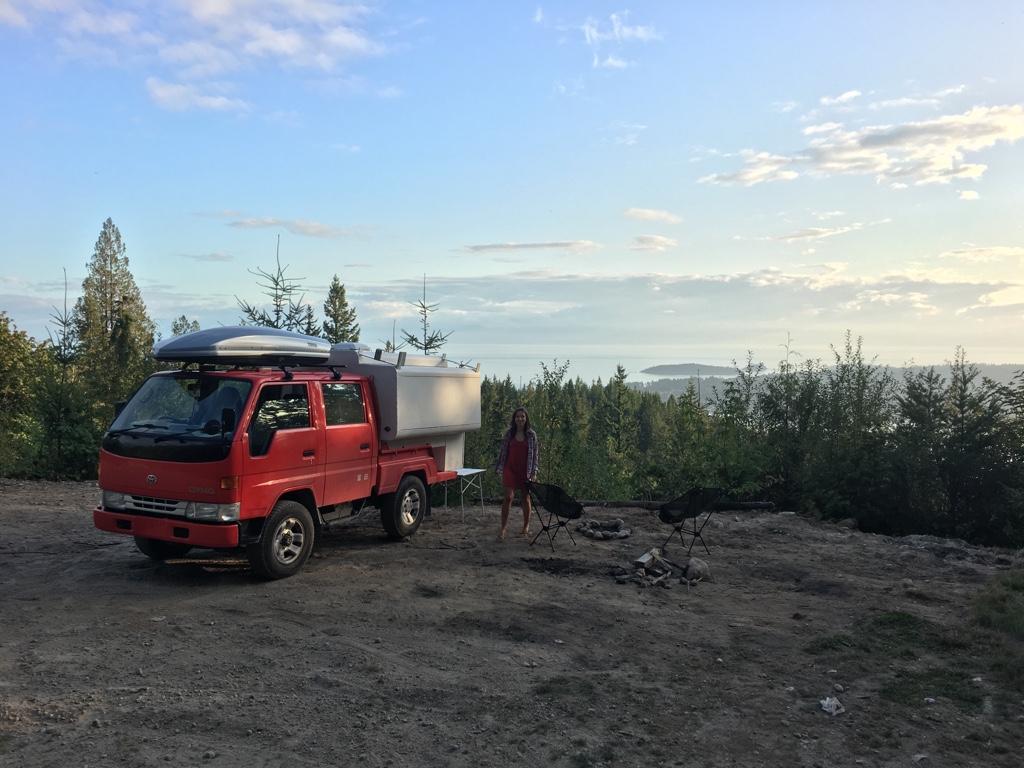 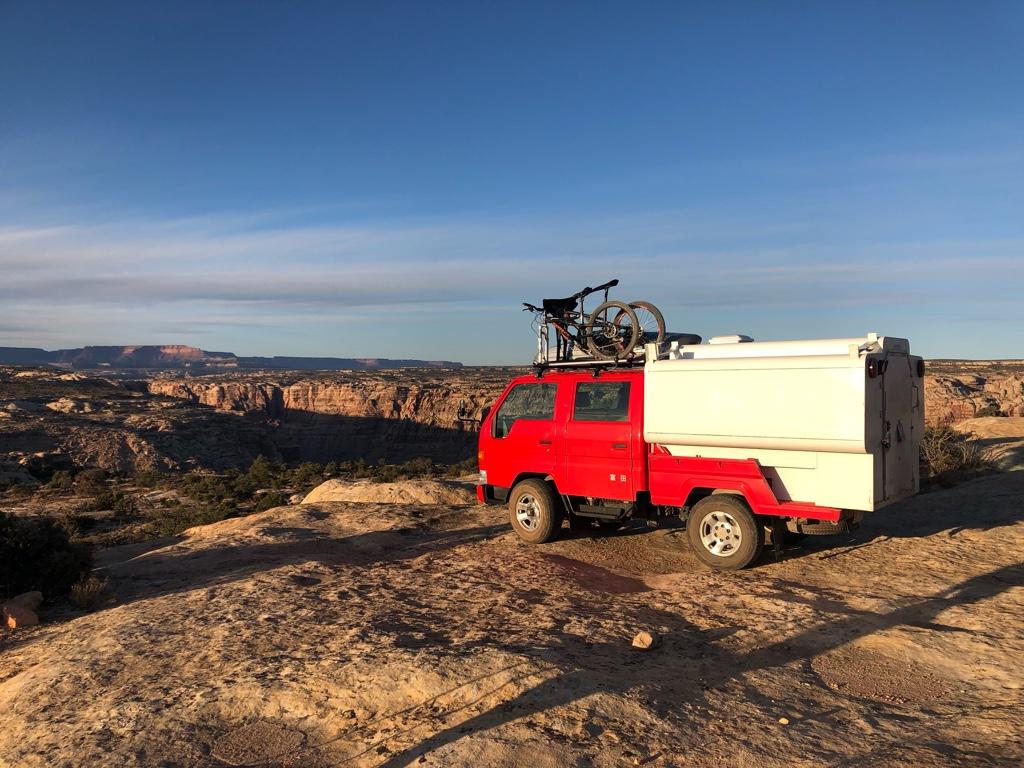 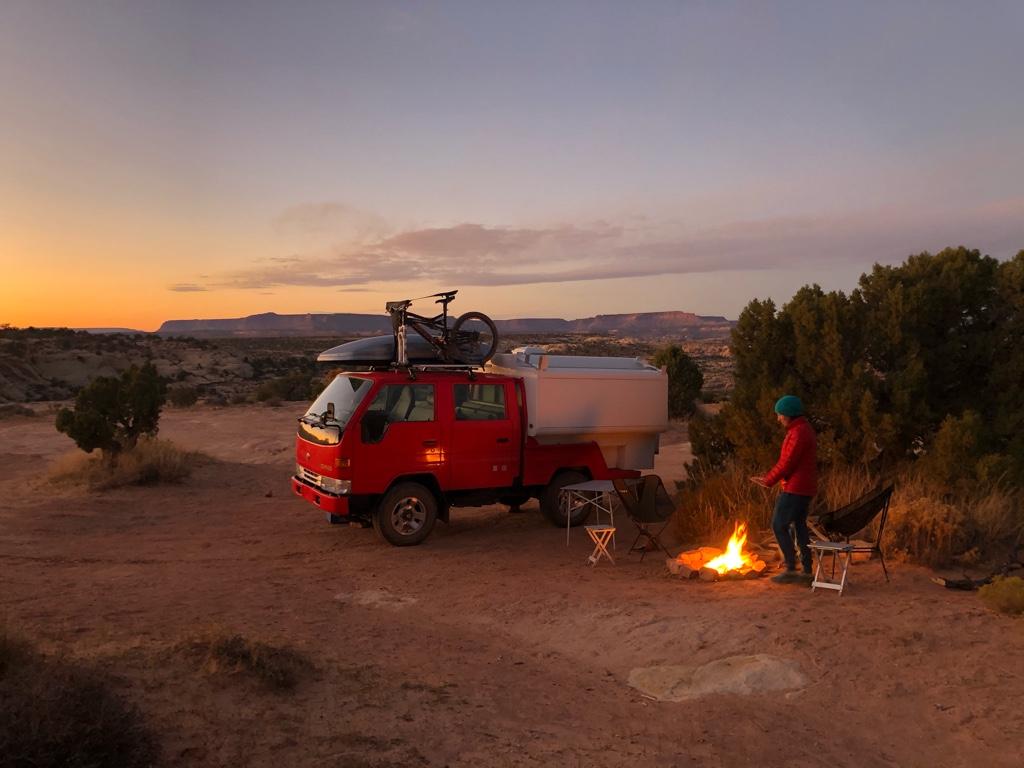 Camper and truck are still very much a work in progress but so far very happy with the direction things are going.
I’ll post more details on what exactly I have done to the truck so far soon...
L

One thing, though. A Dyna and a Hiace are not the same vehicle. Dyna is a much larger, much heavier duty truck. Hiace is a Panel that shares some of its powertrain with the Hiluxes.

It has the grey Aisin Hubs on it, does it share the front suspension with the taco/tundra?

lugueto said:
One thing, though. A Dyna and a Hiace are not the same vehicle. Dyna is a much larger, much heavier duty truck. Hiace is a Panel that shares some of its powertrain with the Hiluxes.
Click to expand...

smokeysevin said:
It has the grey Aisin Hubs on it, does it share the front suspension with the taco/tundra?
Click to expand...

Interesting, I think those came with red hub lockouts.

The bodies would have to match the hub and outer CV spline count but the dials can usually interchange. I suspect being a 2000 that the faces were grey on this Dyna maybe just because that was what Aisin was making at the time.
B

Very cool. How do you import something like this?

You are correct, it is a 150 series. And yes, shares many parts with similar era Toyota trucks/4x4s. And yes, it’s a torsion bar IFS.

I think the GVWR is 1.25 tonnes, I actually need to weight the truck itself to see what it weighs on its own.

I live in Canada, and anything over 15 years is pretty easy. Went through a local guy who specializes in importing vehicles.

One thing, though. A Dyna and a Hiace are not the same vehicle. Dyna is a much larger, much heavier duty truck. Hiace is a Panel that shares some of its powertrain with the Hiluxes.
Click to expand...

I didn’t know this about the HiAce Truck, they look nearly identical but would make sense that they’re lighter duty.

I had seen a few Hiaces like this when shopping for my truck: 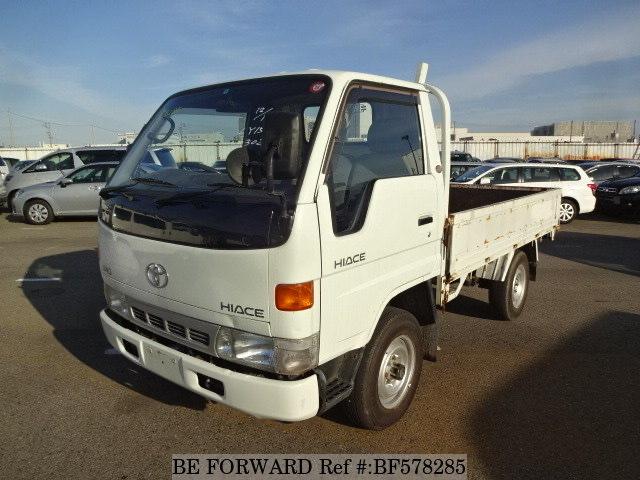 You know, I stand corrected. You're most likely right, I might have misjudged the size of that truck. It looks lighter duty than the Dyna. I believe the Dynas have larger engines than the 5L, and have 2000kg payloads.

Sorry, was thinking you meant payload, GVWR (Or GVM as they put it in the spec sheets) is 3500kg

So time to start adding info on the mods so far and some questions for moving ahead.

Really haven’t done much mod-wise. The main progression so far has been bigger rims and tires which not only has helped increase clearance but also give a smoother ride and lower rpm’s at highway speeds. The sacrifice is some speed and acceleration.

The truck came with 15” euro metric 195R15 LT tires on it. Funny, skinny little things and I knew they had to go.
I discovered that stock 16” rims from 3rd Gen 4runners fit very well with a perfect offset. (ET15)
I started out with 225/75R16 rubber which fit perfectly with no rubbing. I then test fit a set of wheels from a base taco and realized that I could move up in tire size but clearance on the lip of the front wheel well would be an issue. I considered 265/70R16 but decided on the narrower 245/75R16 in favour of a lighter tire (than the 265) with a little less rolling resistance. The truck is already sluggish at highway speeds and heavier tires certainly don’t help. The bigger tires reduced the cruising rpm’s nicely to around 3000 @110kph.

In order to accommodate the bigger 245/75R16 tires I adjusted the torsion bars a bit, lifting the front about 3/4”. This was enough to easily clear the tires for most driving but there was occasional rubbing going through big compressions at high speeds. I’m trying to avoid trimming the fender/wheel well lip however it may be inevitable.

My plan is to lift the body 1/2” with custom spacers, this seems to be the most I can go without serious modifications to the steering linkage. This may be enough to avoid rubbing but I suspect there will still be a little rubbing under full compression of the suspension. There is just one small pinch point on the front edge of the wheel well that is causing the rubbing, otherwise plenty of clearance with the torsion lift. 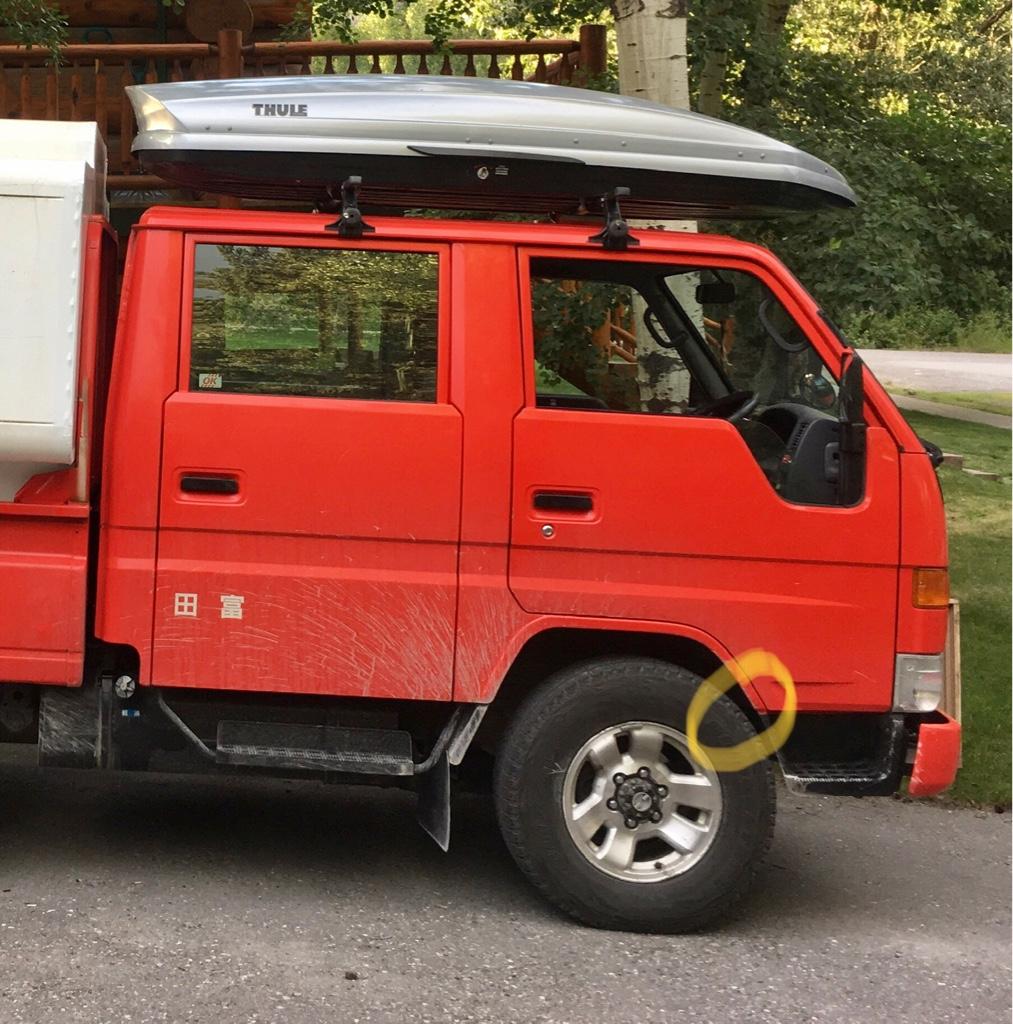 The lip on the edge of the wheel well is about 1” deep before joining the sheet metal of the wheel well, debating trimming about 1/2” from the lip in the area circled, thoughts? I’d really rather not cut into the body but it may be the best option.

As for the rear, there are no issues with clearance at all, the rear leafs are a bit tired however so my plan for the time being is a short add a leaf to lift the rear and help support the leaf pack. I may look at a custom leaf pack down the road.

I haven’t done anything shock-wise, with the added suspension lift and increased range of motion I could probably benefit from new shocks with a longer stroke. Any recommendations here?

That turned into a long update so I’ll stop there, more to come...

With spring around the corner I have been trying to get going with work on the truck again.

Finally got around to installing a 1/2” body lift to eliminate rubbing on the front tires.

I made bushings out of UHMWPE and ended up having to buy longer bolts as well. The OE bolts are class 8 but decided to go Class 10 for good measure. Took a while to source the proper size metric bolts.

Here’s two of the six bushings I made: 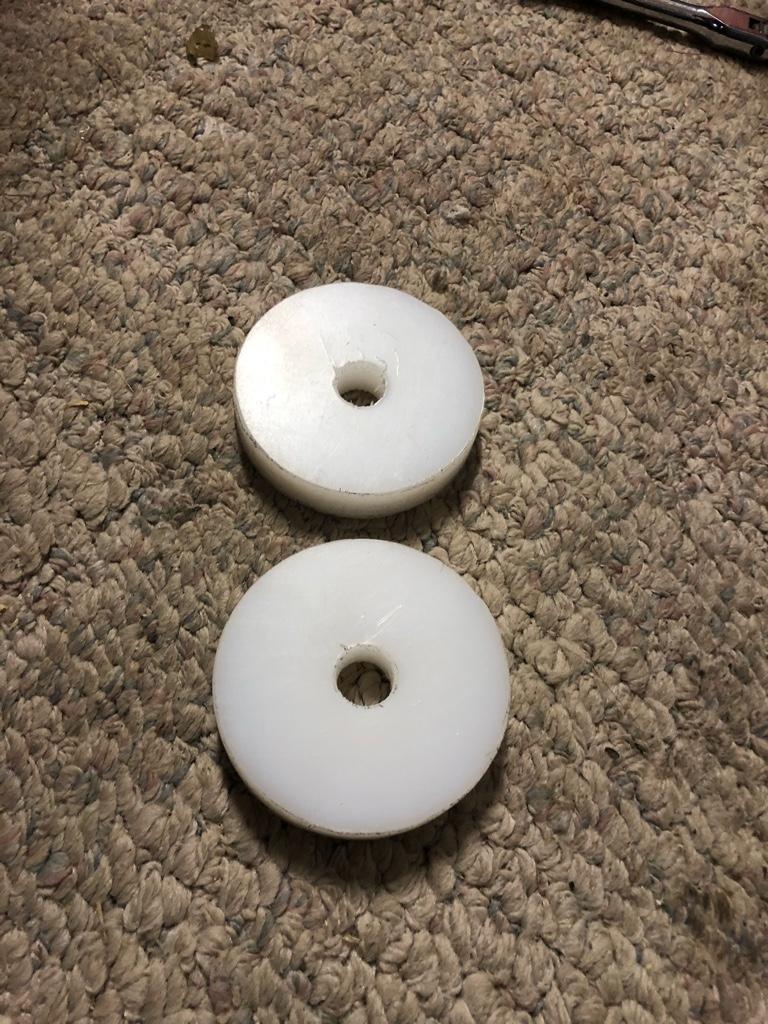 The body was mounted with six body mounts. The box has 8 mounts plus four friction fit supports. I only lifted the body for now but will do the box in the spring to even things out.

Here’s one of the bushings installed: 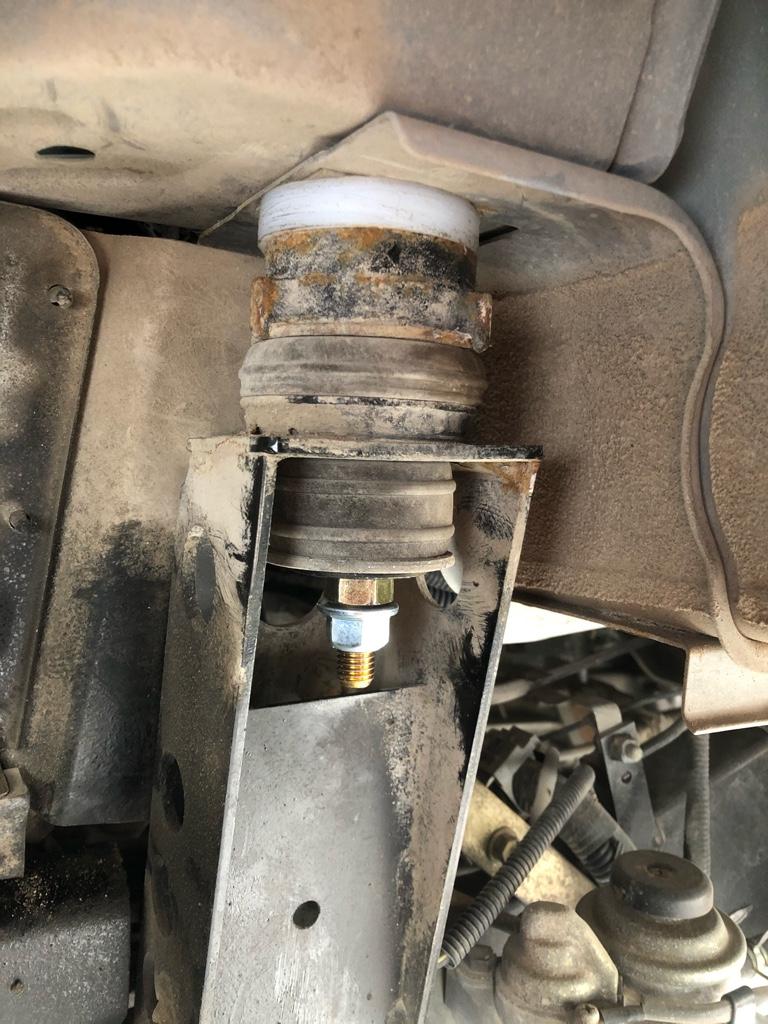