Great stuff, thanks for keeping us updated!

Pacific Northwest yetti said:
Thanks for posting! Its always good to see Wyoming, as it is where Kp and I are from. Always feels like home.
Click to expand...

You are welcome, its a beautiful state and I know how you feel. I wasn't born in Nevada, but every time I cross the state line back into Nevada; I have that same feeling.

CrazyDrei said:
Great to see your adventures, especially making it to the top of Mt. Patterson. Truck is looking good and your driving is pretty impressive. Keep up the adventures and pictures.
Click to expand...

Thank you. I had been up there before with the 4WC, but this was the first time for the Bundutec. Thank you, I'm not sure whether its skills or just not smart enough to turn around...

luthj said:
Great stuff, thanks for keeping us updated!
Click to expand...

Thank you and I will try.

After visiting the Devil's Tower, we needed to find a camp spot. We found a great spot off of the highway and had a nice hike after dinner. 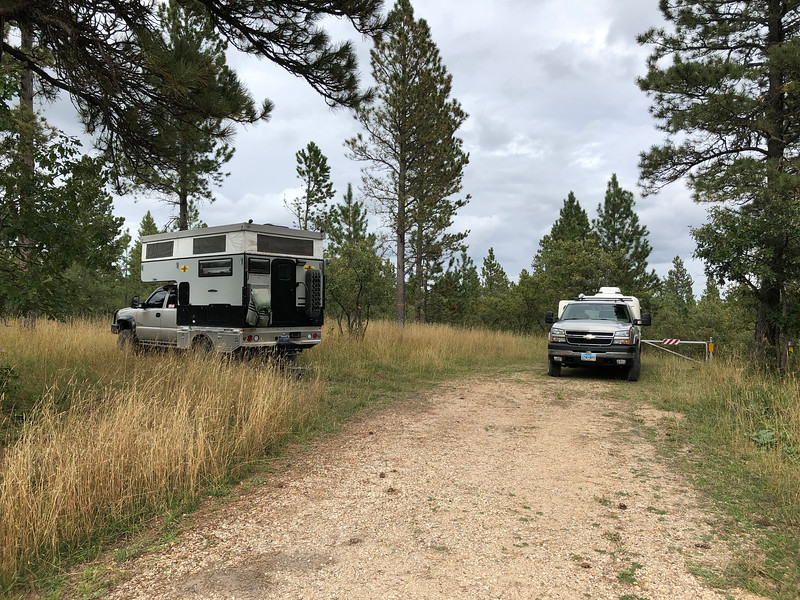 As you can see, we woke up to a weather change. 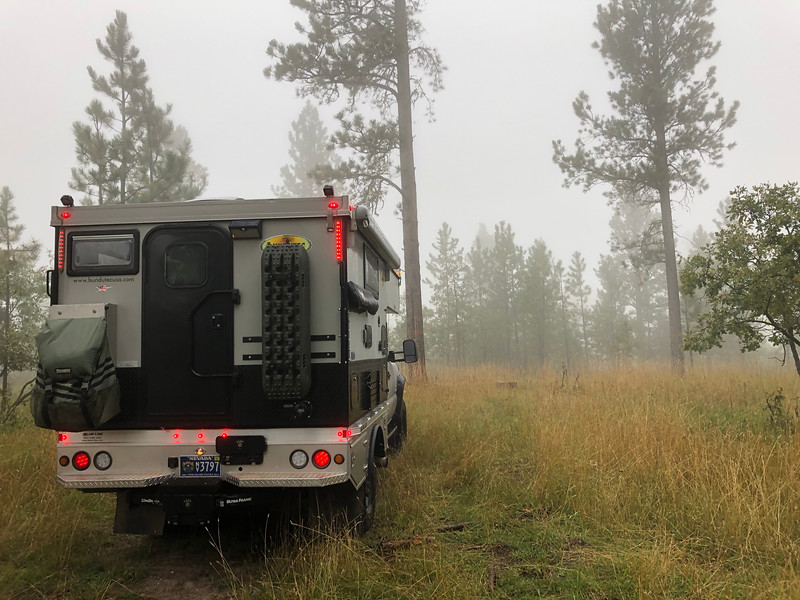 This is also where we split ways. Spressomon's eventual goal was Nebraska and he was on a limited time frame. We wanted to continue northeast-ish, so we headed our way and Spressomon went his.
We found a spot in South Dakota for the night and as you can see, it was still raining/misty so that made it a little less enjoyable for walking about. Not to mention, we were getting into more and more mud. 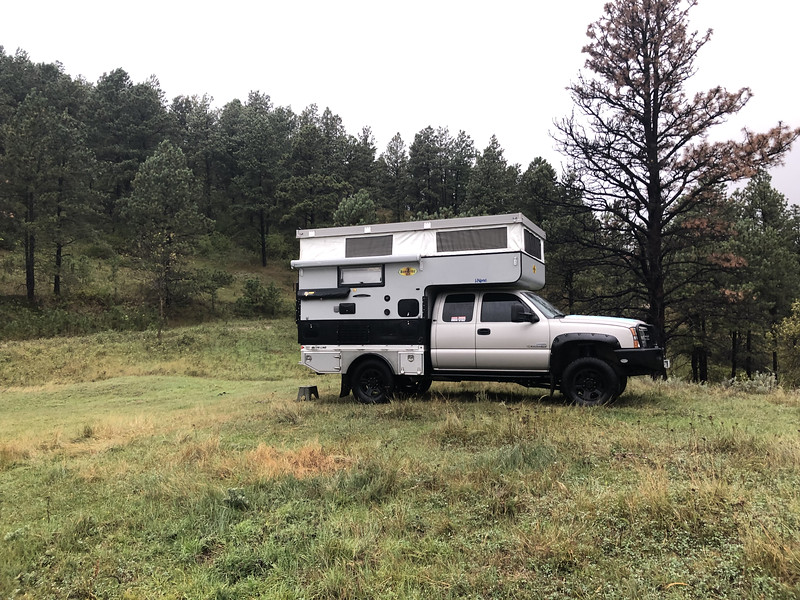 When I was in my 20's, I read about Hugh Glass and was seriously impressed, so we decided go to the monument. That really put his ordeal and accomplishment into perspective and of course made it all the more impressive. 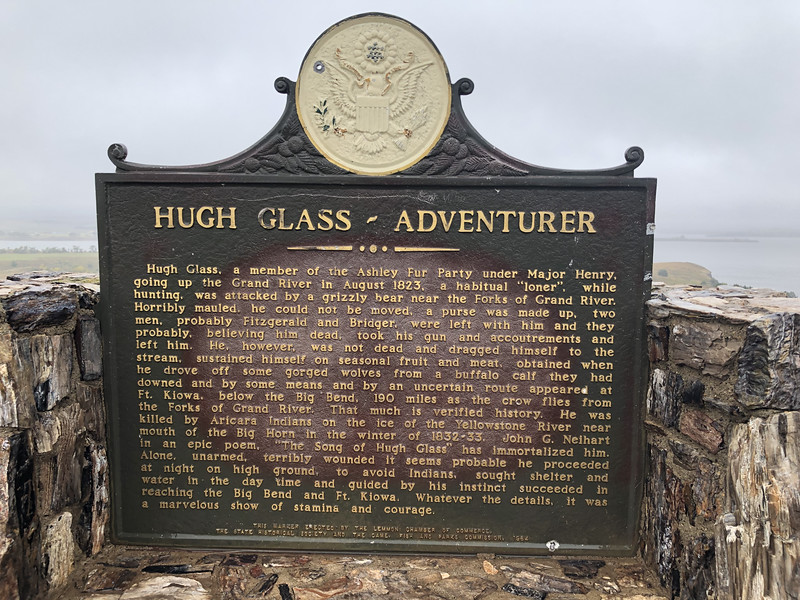 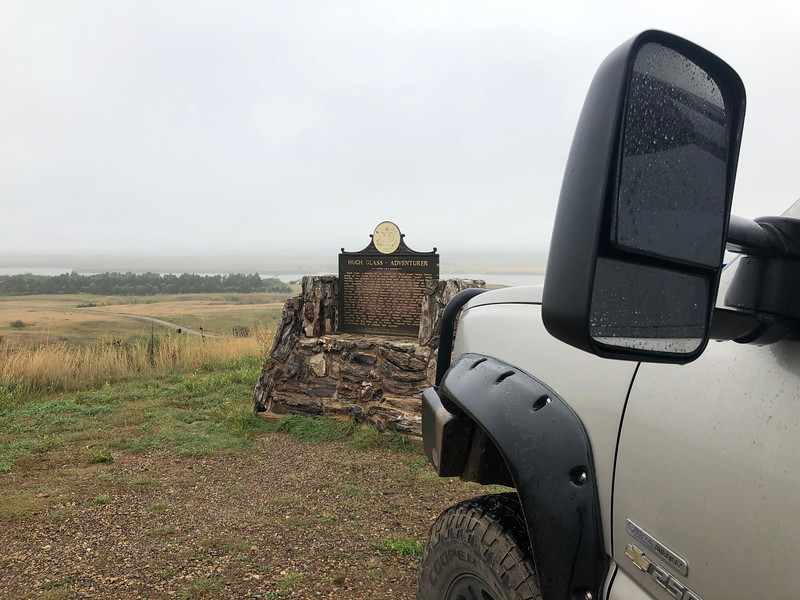 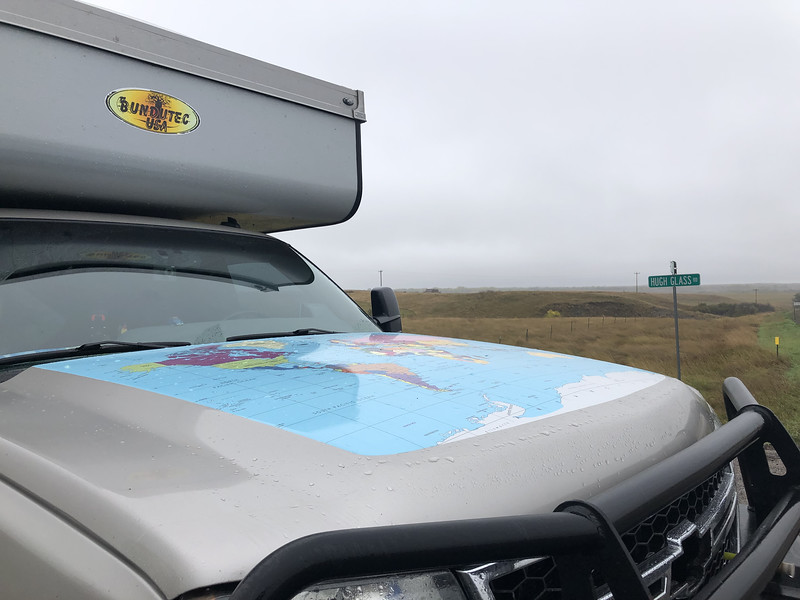 Because of the rain and weather, we started in a more southerly direction hoping to get out of the storm cells. We didn't...

We eventually made it into upper northwest corner of Missouri after a couple of days. We found a state park to camp in after driving through some torrential rain in Nebraska and Kansas. 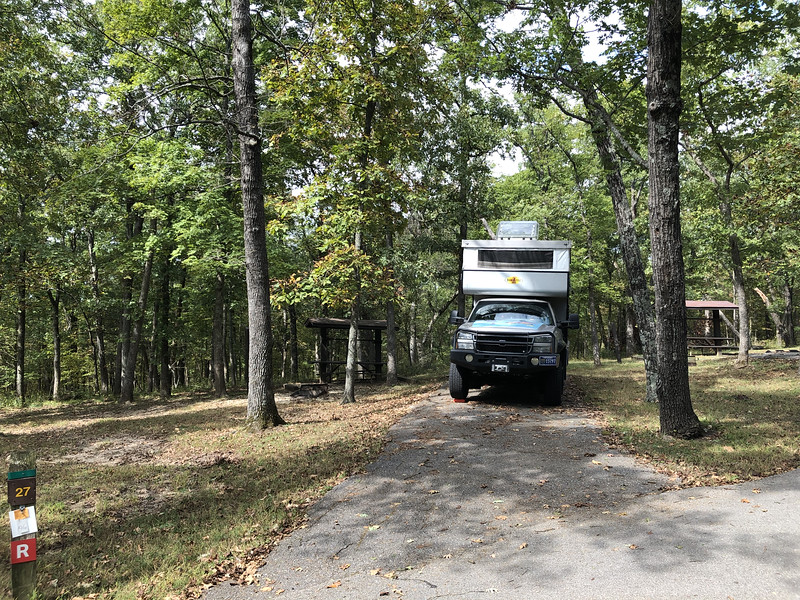 From there we drove to St. Louis to see the arch. I had been as a teenager, but my wife had never been. 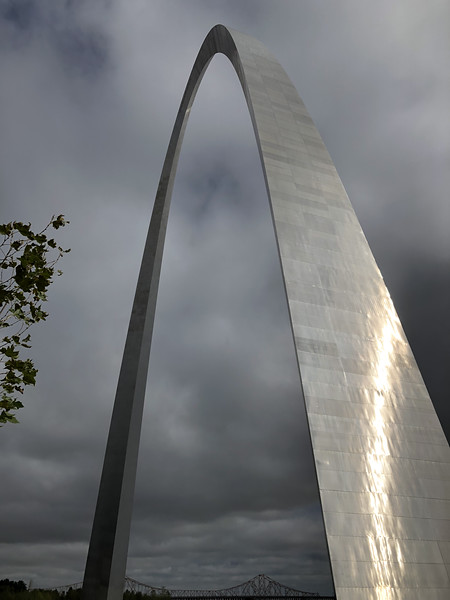 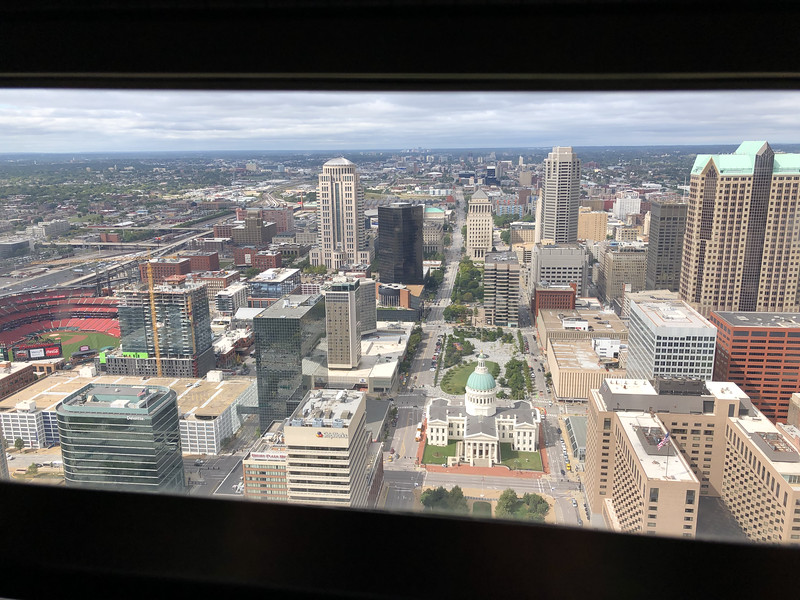 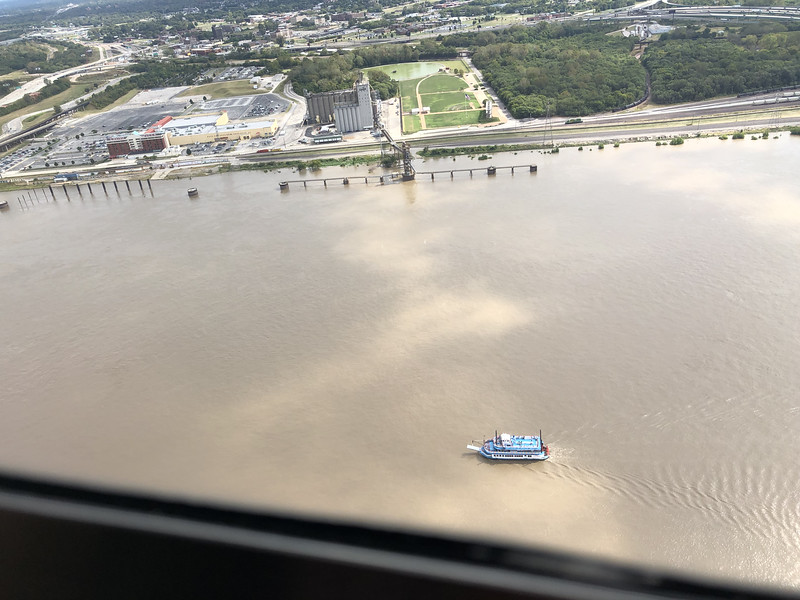 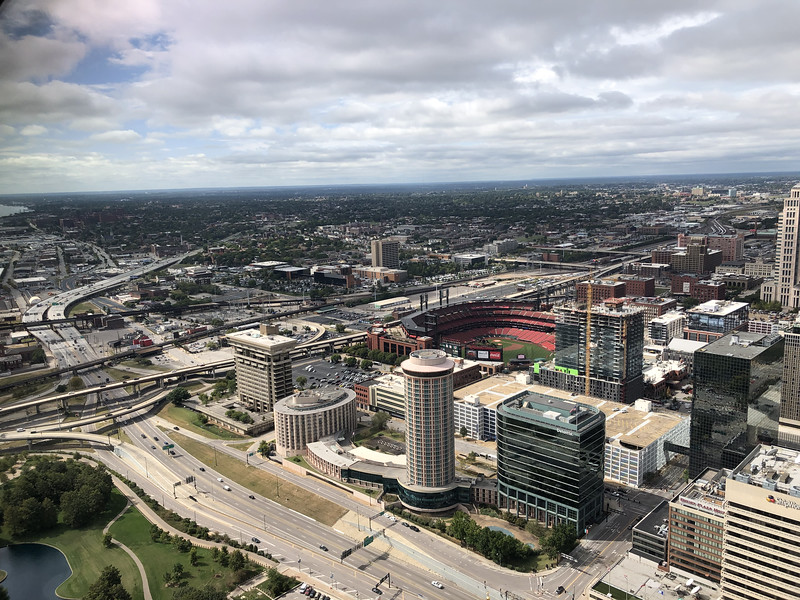 After St. Louis, we crossed the river into Illinois and found a spot next to a small lake. 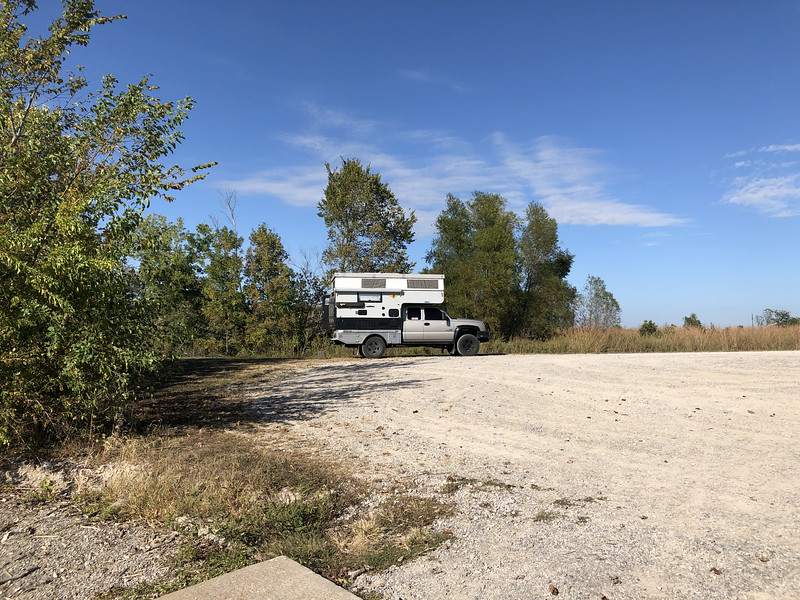 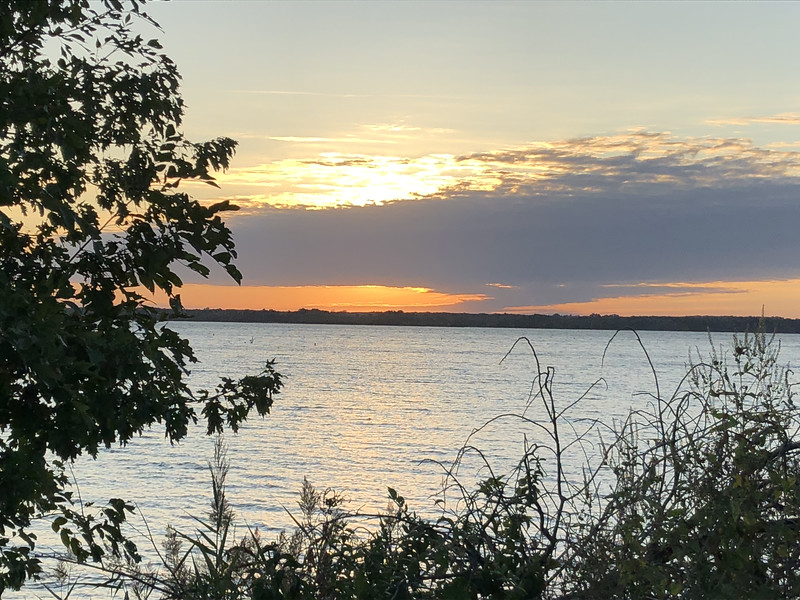 We continued across Illinois to the Ohio River, where we took a ferry. I have no idea why taking a ferry is so much fun, but it makes it feel like you are on an adventure when you take one. 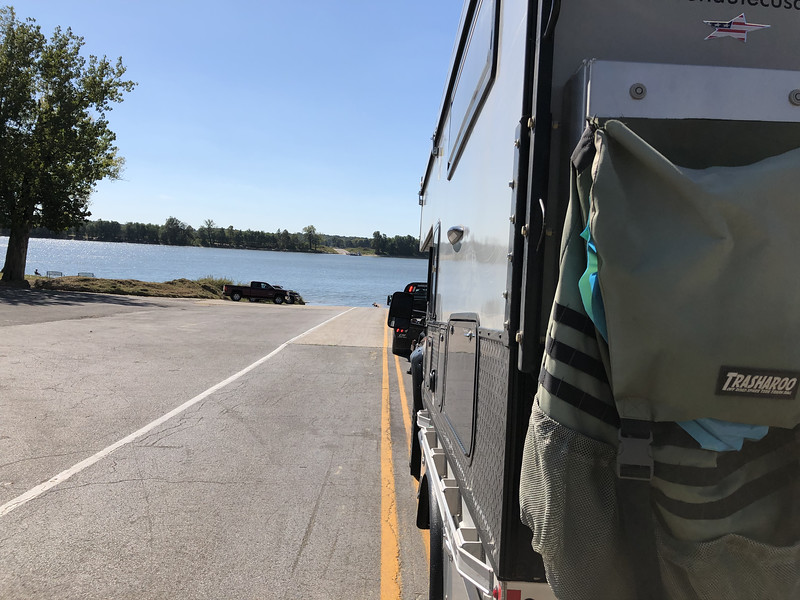 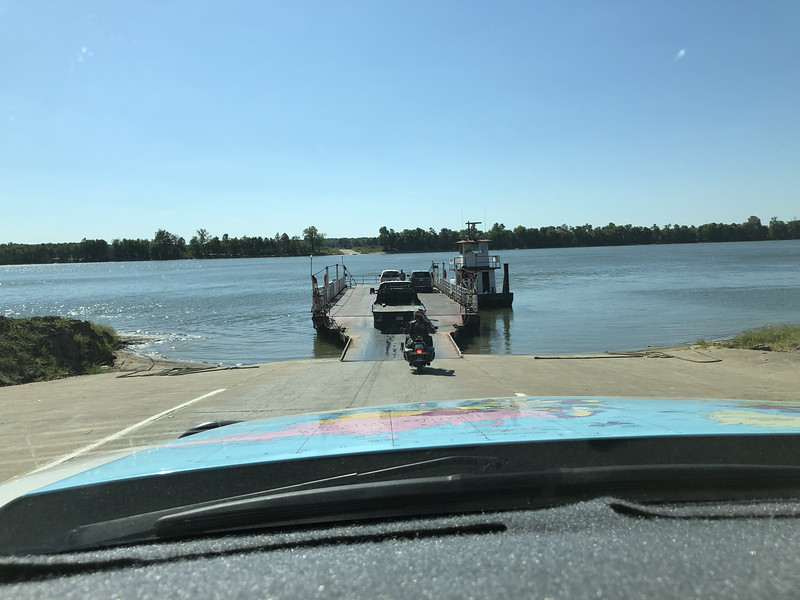 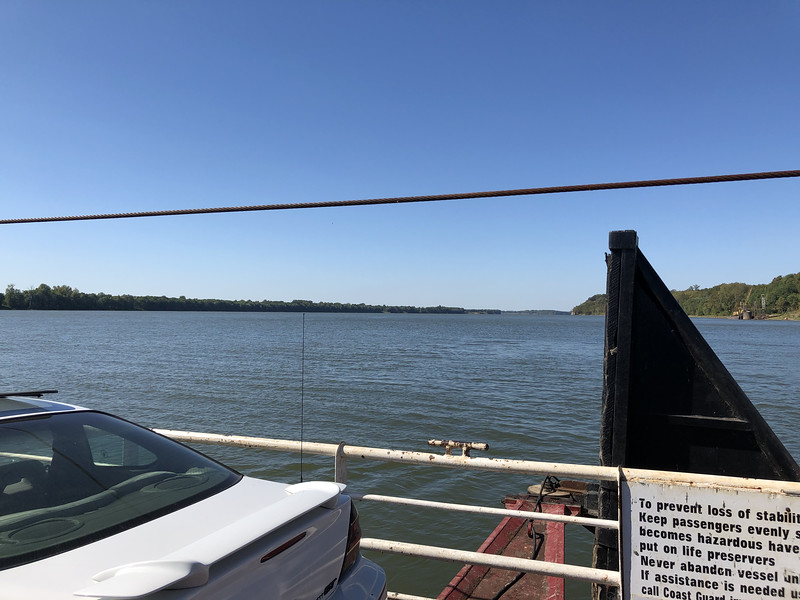 Once we made it across the river, we found a great BBQ place in Kentucky. Copper Roof BBQ was soooo good. We even bought some of their sauce to take with us. Our goal for the day was Mammoth Cave. There is definitely a lack of "boondocking" options the further east, so we stayed in the Mammoth Cave campground. I didn't get any pictures of our camp spot as it was just a campground. We took the cave hike, which if I am being honest is a bit of a disappointment. It really is just large cave with little to no features.

If you are going to be in that part of Kentucky, you have to go to the Corvette Museum (well maybe that's just me). Of course I had to get a picture. 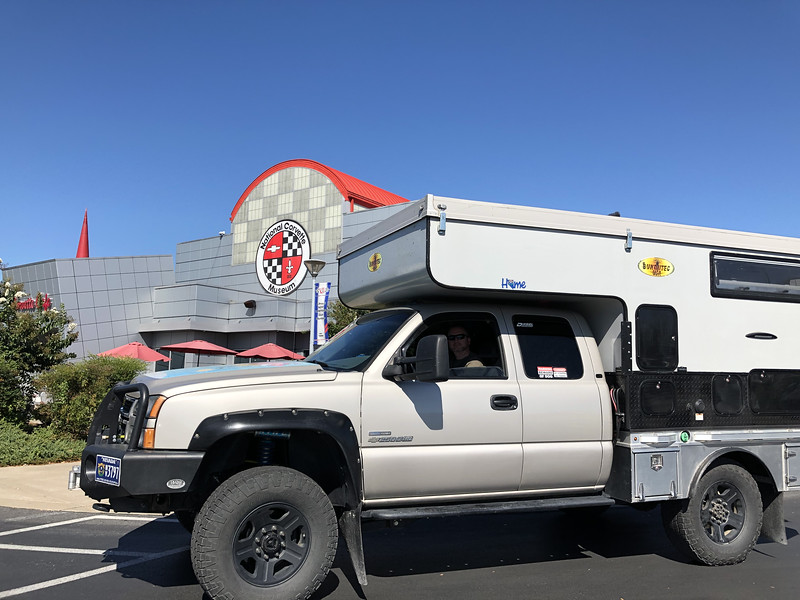 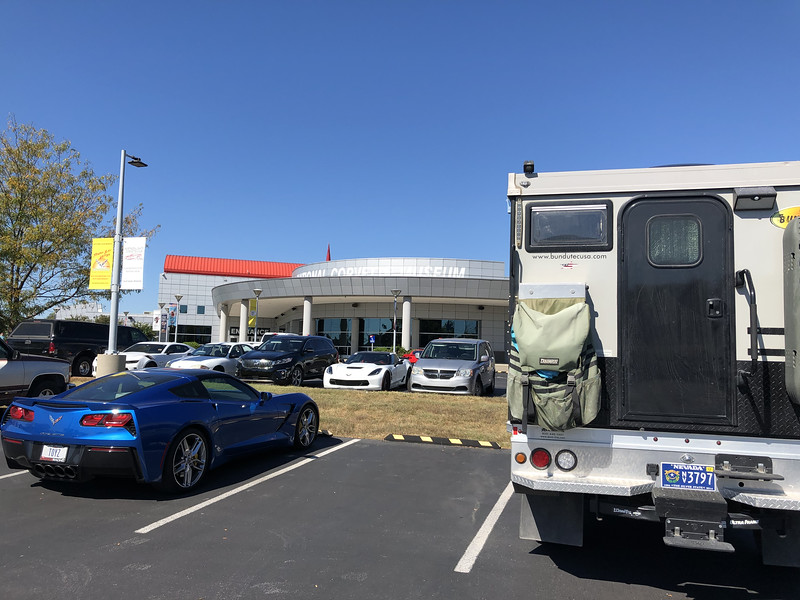 As you can see from this last picture, my Trasharoo is pretty well done for, this is my second one on the camper. Granted my first one I've had for several years, but this one just didn't hold up to the constant exposure. It was time for something different. I decided to order one from Blue Ridge Overland Gear. It seems to be well built, but time will tell. Of course we were still on the road, so I had it sent to my Dad's place. We left Kentucky and made our way into Tennessee. We didn't spend too much time in Tennessee, we stopped in Nashville, but there was a football game that day, so the city was pretty crazy. We pushed on and made our way west through Tennessee toward Arkansas. Our destination was my dad's place in the Ozarks of Northwest Arkansas. 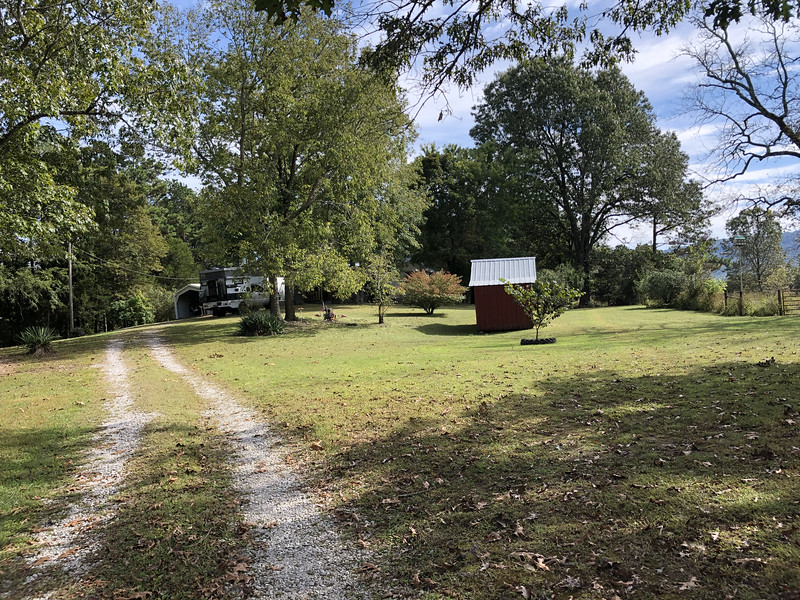 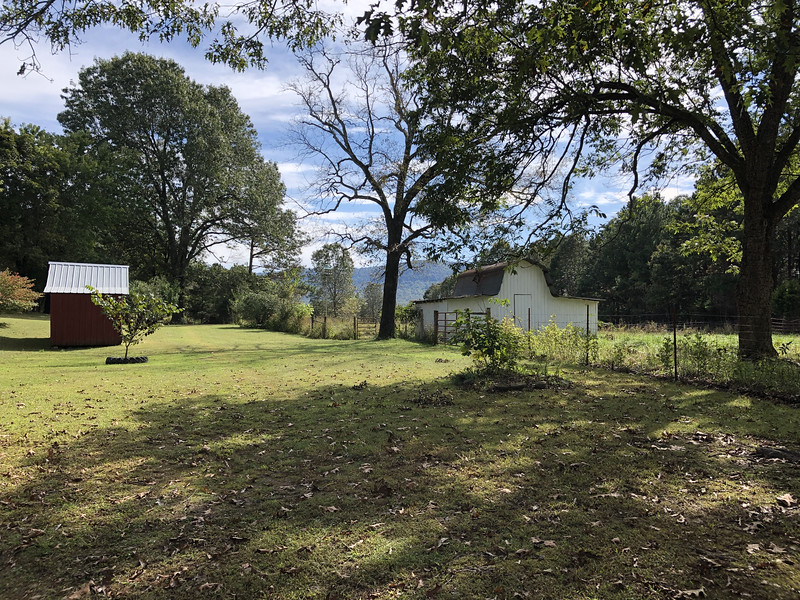 Of course in the name of "I can't leave anything alone," I decided I didn't really like the white canvas of the roof and wanted to change it. I almost did it when I first bought the camper and even purchased the vinyl paint to do it. Unfortunately, I didn't do it then and since we were going to be at my dad's place for a while, I decided give it a go. 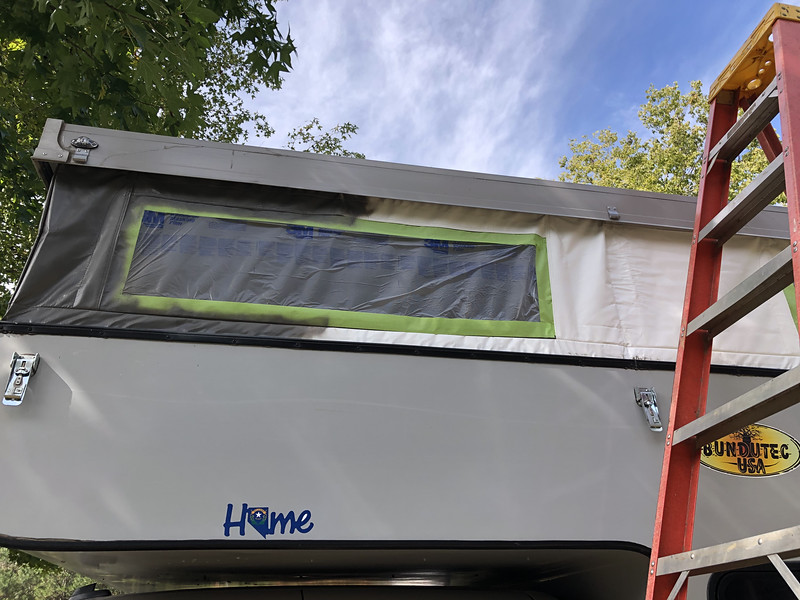 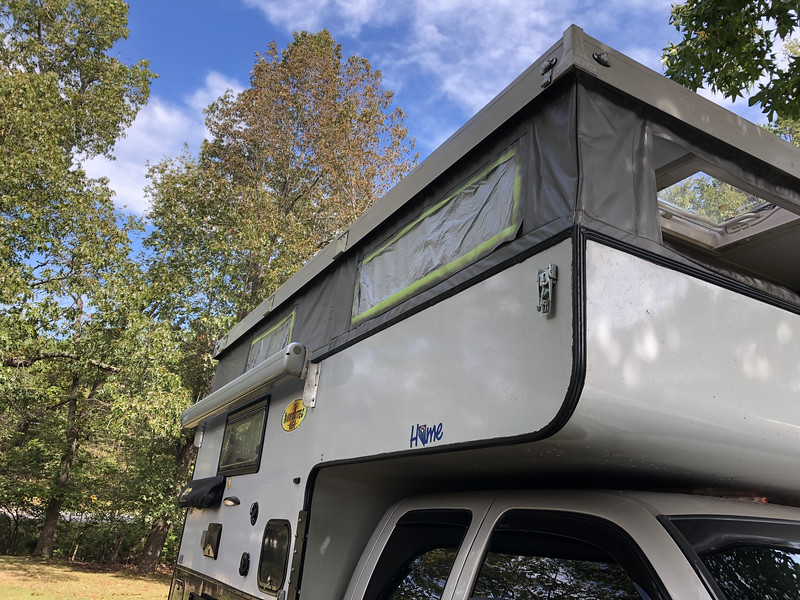 I like the change and wish I would have done it at the beginning.

There are a couple counties in western Kansas where the biggest hill is about 10ft tall. With no native trees, you can stand on your porch with a pair of high powered binoculars and look into someones bedroom window in the next town...

luthj said:
There are a couple counties in western Kansas where the biggest hill is about 10ft tall. With no native trees, you can stand on your porch with a pair of high powered binoculars and look into someones bedroom window in the next town...
Click to expand...

Once heard a local tell me he watched his dog run away for two days.

Lived in Missouri for three years, never got used to the humidity. Get out of the shower dry off, and youd still be wet. It was a wonder we did not mold hahaha

Yep Missouri guy here I'm about 3.5 hours south of STL. if you think STL is flat you should see SEMO.

Well once again its nice seeing your fine truck out there enjoying the back roads and highways Jack. It looks so awesome with the camper on. What a great rig. I can also understand you wanting to go to the Corvette museum. That must have been super cool. Thanks for posting pics of your trip and your truck. Cheers, Chilli...

chilliwak said:
Well once again its nice seeing your fine truck out there enjoying the back roads and highways Jack. It looks so awesome with the camper on. What a great rig. I can also understand you wanting to go to the Corvette museum. That must have been super cool. Thanks for posting pics of your trip and your truck. Cheers, Chilli...

Thank you. It's been a lot of fun and the Corvette Museum is well worth it. You'll probably like this next set as it gets a little more exciting.

It was time to hit the road again. We began working our way towards Texas and to some of our friends who live northwest of Ft. Worth.

We found a quiet little spot next to a lake in southwest Arkansas. 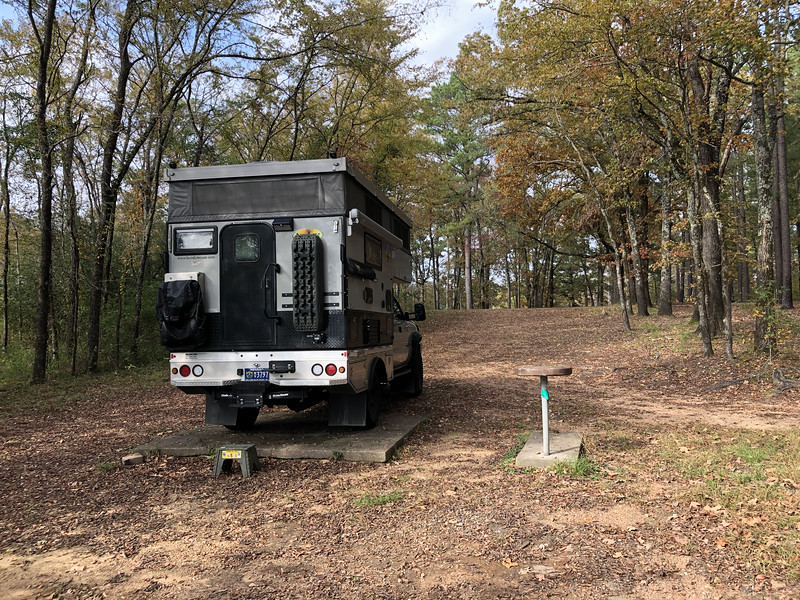 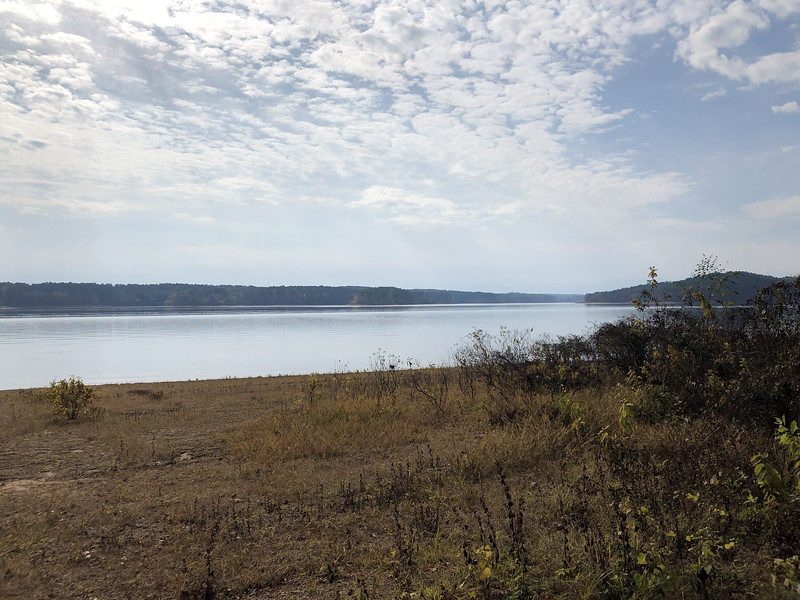 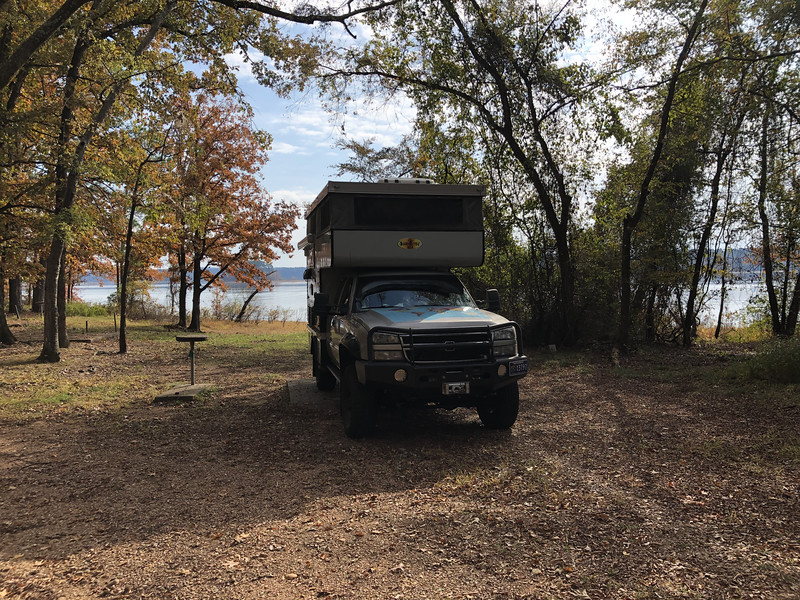 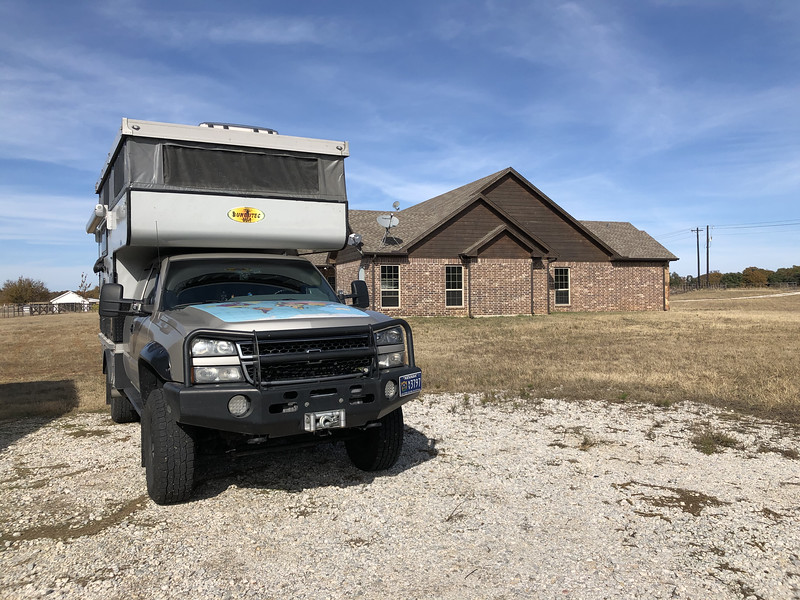 We spent a great couple of days with our friends before moving on. We were still hitting intermittent weather but our general plan was to head south and eventually cross into Mexico. We had a few days to kill, so we headed for Padre Island. 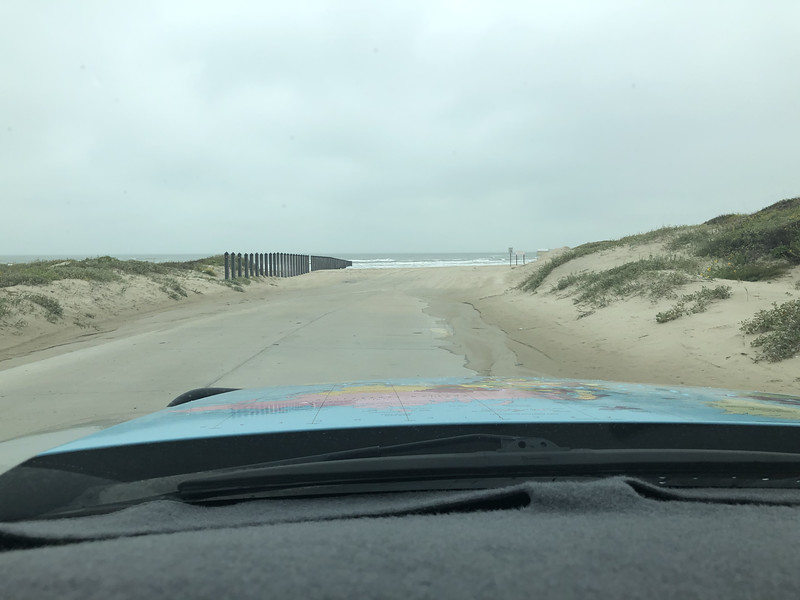 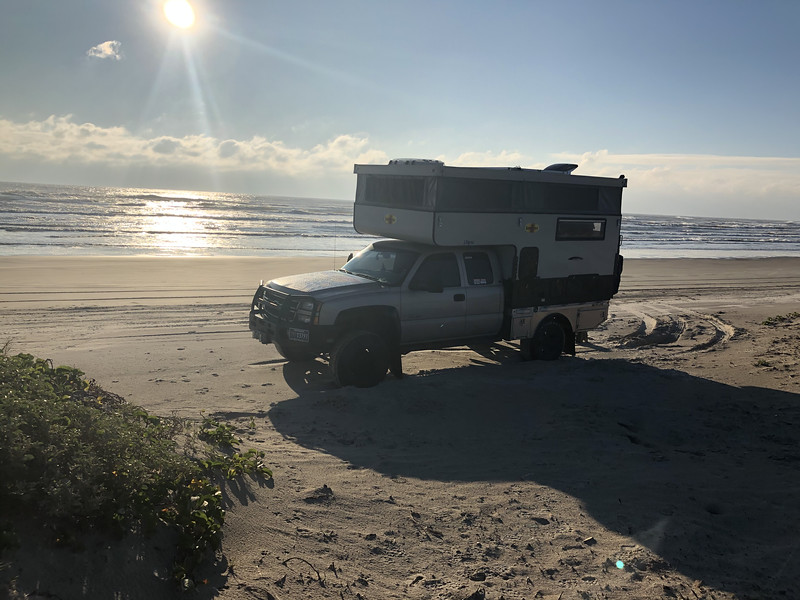 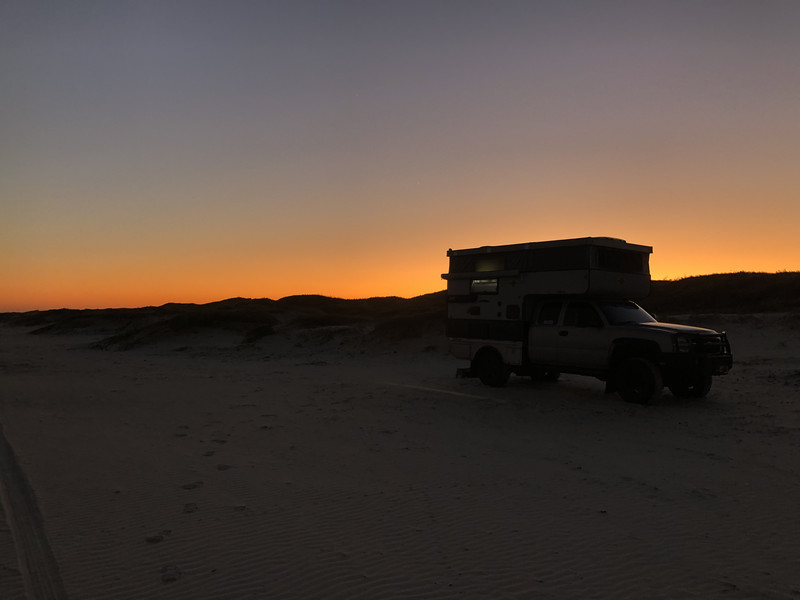