Inspire me with R50 Pathfinders

I have been reading threads here for quite some time but just got around to posting.

The Xterra is our nice car/wife's car and the Pathy is my short distance DD and off-road exploring truck. It's bone stock, and has been for the past 300,000 miles. For the next year or so it will remain that way until I can afford to do a little work here and there on it.

That's where you fine folks come in. I need some inspiration. I have been looking through several pages and haven't found many threads on R50s and I just want to see what people have to say about them and hopefully see some nice pictures of R50s that have been cleaned up or ridden hard.

Bout time someone made another thread about a r50 :wings: Glad to see that there are still some that have interest in modding R50's. While they are not really super hardcore they are pretty cool little rig and can hang with the big boys.

I currently just have 2in lift on mine with 285-75-16 bfg at's, but have an additional 4in sub frame drop lift im waiting to install, so it will be 6in lift on 35's. Check out npora.ipbhost.com its a forum just for pathfinders and you can get alot more info on these rigs. Here are some current pics of my little truck and a link to a video I put on youtube of lifted r50's

That is one damn good looking Pathy.

I recently joined NPORA and have found the vehicle specific information to be awesome, I was just hoping that I would see a bunch of Expedition-style Pathfinders here because that is what I want to do with mine.

When mine wears out, I will end up salvaging what I can then build a whole new rig after I replace it with another daily driver. I don't plan on driving this one as a DD for more than a year, and I can't wait to have some money to dump in it.

Americas Overland - The Driving Handbook
by Donald Greene
From $20From CAD$29.66

Overland: A Mercedes-Benz Journey Through the Americas
by ri M. Stroh
From $20From CAD$33

I used to have one. I would personally leave it stock, put some tires on it that fit, and drive it. They don't lift well at all due to the dumb front suspension. For $500, use it primarily for off road duty....

I really did like mine, but it had some significant limitations in the adventure travel department.

Thanks for the compliment man! In terms of "limitations" sure its going to have some. It is a unibody, but so are XJ's so you really cant hold that against an R50. I wheel my rig and have never once had a problem with doors opening or closing or any other issues normally associated with unbodys'. And yes the front suspension is not exactly ideal for off roading but that does not stop me from taking it off road and using the 4wd. I wheel with lifted trucks and jeeps and I can follow them most places, and by no means do I claim to drive a rock crawler and I really dont have any need to do any hardcore stuff with my daily driver. Cause thats exactly what it is, a daily driver if I screw up and ruin it im SOL.

Quite frankly im glad it has the struts up front cause I still use it as a daily driver and it sure as hell beats the ride of any jeep, or even my friends lifted 4 runner. Which is why I love R50's so much they truly are dual purpose rig. Sure it takes a little time to figure out how to fit the bigger tires and get more lift but once you do you will be happy you did so.

In terms of being an expedition rig, yes thats what I was kind of going for. Im currently a Junior in college and money is always tight for me, so I really dont ever get to spend much on the pathy. I have lists of things I want to do to the rig, but never get the time or money to do them. Once I graduate things will hopefully speed up and get accomplished

This is my absolute favorite 4WD vehicle. I've gone from Chevy K-5, to Chevy S-10, to Jeep XJ, to Nissan Pathfinder. It is amazingly capable with just "slight" modifications (2" coil lift and decent tires). I have also found the powerplant/drive train to be very reliable. Just a nice all-round vehicle if you ask me.

I have a list of upgrades very similar to Andrew's, but BTW - What are "limb risers"?

Here are some photos of where she's been (and what I do with her): 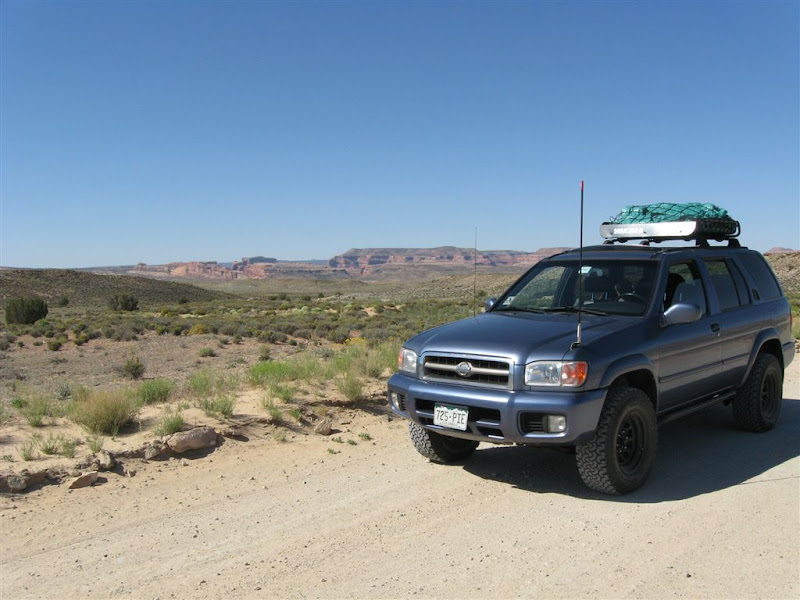 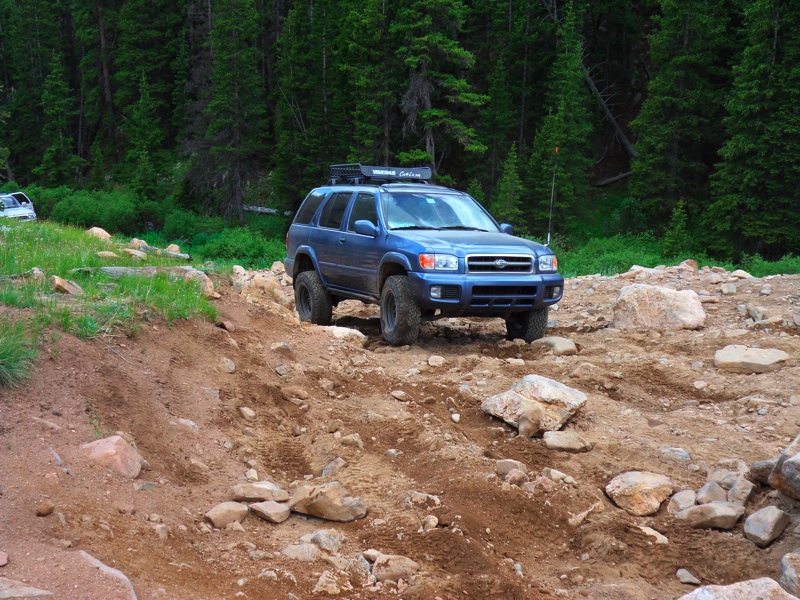 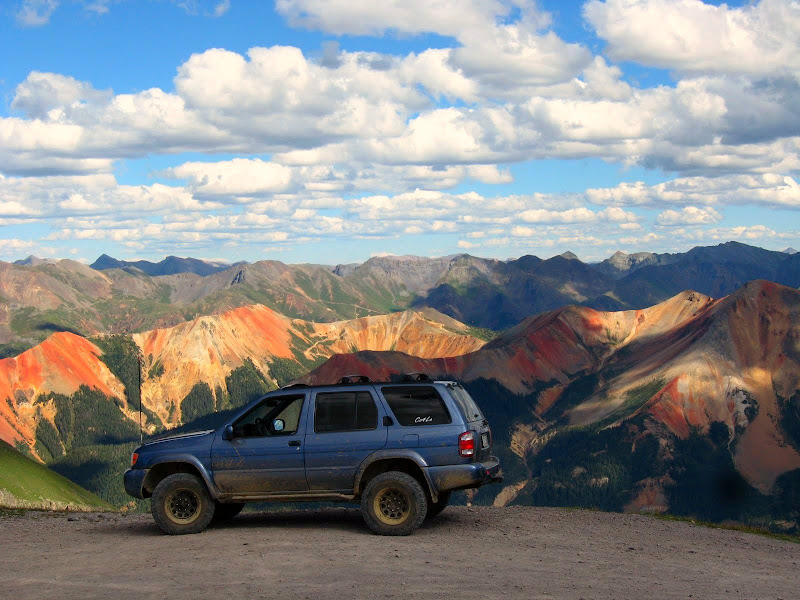 Limbrisers are basically 2 pieces of wire and some hardware that run from a mount either on your bumper or hood to the top of your windshield or roof cross bar or rack to effectively catch tree branches that are in the trail and guide them up and over the vehicle reducing the number that hit your windshield and side of your vehicle. Alot of jeeps and rovers have em.
D

:ylsmoke:I really like the way the r50s look but im cheap and have a wd21 which i love even though its stock
A

This is my absolute favorite 4WD vehicle. I've gone from Chevy K-5, to Chevy S-10, to Jeep XJ, to Nissan Pathfinder. It is amazingly capable with just "slight" modifications (2" coil lift and decent tires). I have also found the powerplant/drive train to be very reliable. Just a nice all-round vehicle if you ask me.

I have a list of upgrades very similar to Andrew's, but BTW - What are "limb risers"?

Here are some photos of where she's been (and what I do with her):

What is the rod on the left front side of your hood?

That rod is a firestick....an antenna for his CB radio
A

Got it. Why the placement though? Seems like making a whip like on the old CUCVs where it bends over the length of the car would be less likely to hang on things and would give a larger surface area.

From the people who I have talked with about Firesticks they are some of the best antenna's you can get for your cb. I dont have a cb nor a firestick so I cant personally say if thats true or not.
A

Maybe something to do with battery location?

Its the Outback look.. if you look at landrovers or rangerovers a lot of times you will see the Antenna out front.. There is no plus or minus to it..
Truly all you need is about 1' of antenna stick up over the car or truck..

Love looking at these pathys too bad they have made them more for soccer moms than a true SUV anymore..

Wow, a bit off topic for the thread, but I'll go with it.

This is also a topic that will give rise to MANY opinions, so I'm careful with my response...but there were actually a lot of pluses and minuses that needed to be weighed before plopping one on my rig, and "looks" had nothing to do with it.

I researched many mounts and locations on vehicles and asked people on mulitple forums about their experiences with mounting locations, mounts, and antennas before I chose mine.

The best place I could have mounted was rooftop, but it doesn't go well with traveling/packing a roof rack and I'd have to remove it to go in my garage. It would also get ripped off on trails I run quite easily (seen it twice here in Colo).

I researched bumper mount and found from other users that the rear bumper location limited the antenna's ability to bounce the signal forward (in front of the vehicle). If I went with a rear bumper mount, I'd need a longer antenna to stick up above my roof line. So up front is what I decided.

I didn't want to bumper-mount mine (because I've ripped my bumper off twice in the past year). The hood location gives good signal bounce in almost every direction and I get good reception/transmission distances (around 2 miles in the hills and we hit 5 miles from mtn top to mtn top just a couple weeks ago). I chose this side of the vehicle based on electronics in my engine compartment and the ease of wiring through an existing penetration/grommet in the firewall near the steering column. It also made it simple to jump in to the fuse box panel for power.

This antenna is short enough that the tip usually only grazes tree limbs/bushes, but it is also sitting on a heavy duty spring mount that lets the stick bend completely horizontal helping prevent snapping. The antenna is completely tunable without ANY tools and is considered to be one of the best for the applications that I use it for. Other folks like the Wilson Flex (I've heard good things about it and may try it if this ever breaks), but I have yet to see a whip antenna up in the mountains in the past 4 years (I hit about 40 trails/year here in Colorado) and I'm guessing it's because we aren't highway talkers needing to hit people far away. The only purpose of this install was communications with a small group caravaning to a trail or up running a trail. We usually aren't more than 1/4 mi from eachother at any one time, so a tall whip just isn't needed.