How to swap out the thermistor in your Dometic CFX

If you're having problems with temperature control, you probably have a bad thermistor. Apparently they are a weak link on Dometic fridges and have been for many years. Some last 10+ years; mine lasted about 4 before it crapped out.

Luckily the CFX fridges require a lot less invasive surgery in order to replace the thermistor than the earlier models. Unfortunately I was busy doing the work and figuring things out, so my pictures aren't great, but they will give you a basic idea of what to do.

My fridge started freezing foods solid, despite being set to 40º (and showing 40º on the display). The actual interior temp ended up something more like 15º. The thermistor sits against the side of the fridge compartment and reads the temp of the interior metal liner (not the compartment itself). So it will always read colder than the compartment by a couple of degrees.

The thermistor is accessed from the area where the compressor is located. Here are the steps:

1. Turn your CFX fridge upside down with the control panel facing you

2. Remove the three tiny screws on each side panel and the 8 tiny screws on the bottom of only the end piece. Do not remove the Torx head screws that hold on the corner bumpers - (they don't hold the plastic cover onto the body)

3. Gently pull the lower end panel up and toward you (standing at the end of the CFX). be careful because the control wires will be connected and there will be just enough room to lower the panel to get access to the control board

5. Locate the thermistor connection (two pins, both wires will be black) and remove from the control board.

8. Using the old thermistor as a guide, fish the new thermistor in under the compressor, goop your saved paste onto it, and then insert it deeply into the hole. Then mush the mastic back over it to keep it in place. Attach the two cable clamps to secure it.

9. Plug the new thermistor into the control board, being careful to orient the wires so that they will coil up nice and flat

11. using the remaining two screws, attach the black cover to the other two standoffs, securing both the cover and the control board with the wires underneath.

12. Reattach the cover by inserting it all along the bottom edge where it fits into the case, then bring it up over the two round feet on the bottom of the fridge.

13. Replace the 8 screws on the bottom

14. Replace the 3 screws on each side fo the case.

Test the operation by setting the temp to 40º and then place a cup of water in the fridge overnight. Set the cup of water on a small piece of wood so that it is not in direct contact with the side or bottom of the fridge. Test the temp of the water the next morning. It will probably be a few degrees colder than the control panel indicates - so set your temps accordingly.
H

Nice writeup! Where did you purchase the thermistor from?

harpersJK said:
Nice writeup! Where did you purchase the thermistor from? 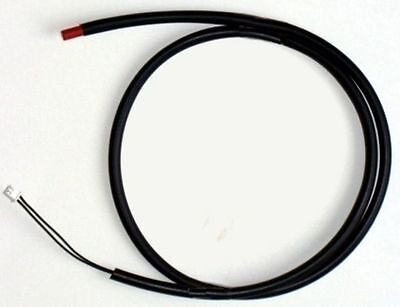 Hate to ask a dumb question, but is the thermistor you listed here the same you used? I also have a CFX 65W with the same issue and the eBay listing does not specify any Dometic models. And I don't know with Waeco CF series are built similar to Dometic CFXs.
Thanks for the write up!

amcottin said:
Hate to ask a dumb question, but is the thermistor you listed here the same you used? I also have a CFX 65W with the same issue and the eBay listing does not specify any Dometic models. And I don't know with Waeco CF series are built similar to Dometic CFXs.
Thanks for the write up!
Click to expand...

I used the one listed in the eBay link above. It fixed the issue, but I have found that the temp is now 7º colder in the box than the readout indicates, (it is consistent throughout the range). I never tested the accuracy before, but this is something I can live with until I get the factory part from Australia sometime in December...
B

Same problem on an older Edgestar, which has the sensor buried and inaccessible. They realized the problem, and buried a second, spare sensor on later models.

Since the compressor wanted to run excessively due to the thermistor lie, I cut a feed wire to the compressor and ran it through a contact in a new temperature controller, with the sensor lead up the side, underneath the door gasket, then down and epoxied to the interior in a corner. Celsius only. Can be used for heating or cooling. Differential set by turn on/off settings. Mine has a sensor calibration adjustment that hasn't been used. Five bucks about five years ago. Tested by freezing water.

Thanks for taking the time to write this article.
CFX owner
-
KenC
M

So grateful to have found this article. I had ordered the thermistor from Everything Caravans in AU on Ebay(https://www.ebay.com/itm/133518057856) for my Dometic CFX 65w. Great seller and very helpful. Due to my timeline he suggested expedited shipping and it came to me in MS/USA in 11 days. However, I realized when I started to install it I had been looking online at other models, not the CFX line, and they vary significantly in how to replace. Some came with a spare, some had to completely disassemble the case, etc. Found this and it was super easy with a lot less hassle than what I had been looking at. So, my total investment was $90, including expedited shipping. My time was about an hour(not including the many I spent searching!). That was a whole lot better than a new one at $1200-1300!
Also, worth mentioning, I only knew it was the thermistor because I reached out to Dometic. They said, "sounds like its a bad thermistor which is not a replaceable part." Whaaat?? Glad to have found this group, too!

Mattssacre said:
Hey, the that's actually not the correct Thermistor for the CFX, the correct is https://www.ebay.com/itm/133518102378. It's currently showing sold out but you can buy it directly from their website too (https://www.caravanservices.com.au/waeco-thermistor-t-s-cfx-fridges-22-3b-103f100d). It's part number 22-3B-103F100D in AUS (Waeco), or part 4450001983 (Dometic) in the USA. The part is actually called the NTC on the Dometic parts break down. I spoke with a rep trying to figure it out. For what it's worth, I was not able to find the US version of the Thermistor (Dometic will not sell it), and the only place I found that carries the Waeco one is the same company that's selling it on ebay (Everything Caravans). I chatted with them back and forth and they seemed pretty knowledgeable.

Thanks to the OP for the break down. I just ordered one last week and I'll let you know how it goes with my CFX50. The rep at Everything Caravan said it'll most likely take a month to get here to California due to COVID and airmail issues.
Click to expand...

Yes, you're right - I should have made that clear. My initial research indicated that the correct part is #4450001983 (aka "22-3B-103F100D") but as you discovered, it is not available in the USA. I actually spoke directly to a Dometic engineer and with the Regional Sales Manager for Dometic. He offered the following links: (the eBay links are now probably expired).

In the end, I didn't want to wait a month or spend $50 to ship a $25 part, so I took a chance on the bay one I linked earlier, and other than being 7º off, it works perfectly well. (I just mentally adjust for the 7º difference).

Do you have to turn the unit upside down?

Usually you don't want to turn fridges with compressors upside down or on their side, etc, the oil will drain out to the "wrong place".

Superduty said:
Do you have to turn the unit upside down?

Usually you don't want to turn fridges with compressors upside down or on their side, etc, the oil will drain out to the "wrong place".

I don’t think that applies to these fridges, as they are designed for vehicles. According to the Dometic rep I talked to, they can be turned upside down when off but should not be operated at more than something like a 30° angle.

Btw the way I got a hold of someone is literally by machine-gunning every single possible point of contact - phone calls, emails, Twitter, Facebook, Instagram, LinkedIn etc. eventually I put together a contact list and then put my old sales skills to work navigating the phone systems and asking for referrals every time I found someone that was a dead end, creating a branching tree of contacts.

Generally the people I talked to wanted to be helpful but just lacked knowledge. It seems there are only one or two people in the USA that know the CFX product line.

Not to bad mouth dometic, but when I suspected my thermistor went bad in my ARB, I called ARB in North America. Someone picked up the phone. I asked to purchase a thermistor. They transferred me to tech. The guy troubleshooted the issue with me. We determined thermistor was the likely problem. He says they don't sell them direct, but he would send me one. My fridge was many years out of warranty and i wasn't even the original purchaser. I had a trip coming up. ARB Fed Ex overnighted the thermistor to me - zero charge.

I agree, Dometic customer service for these fridges is abysmal through normal channels. Something to consider when buying one of these high dollar items. They are just too big of a global company and don’t seem to be focused on this overlanding market here in the US. I’ve heard Wayco/Dometic support in Australia is top notch though.

Thanks for this, My CFX-75 has started freezing one side solid no matter what the setting, so I'm assuming this is the problem.

Glad to have found your post, came up on my first search on google... thanks for the hours of work you did tracking down the part... with your post it only took me a couple of hours of total time invested and back to having a functional fridge instead of just a freezer... setting of 50F was giving me about 30F or so...

Couple minor additional steps I had to do to get to the two cable clamps that hold the thermistor wire to the side wall of the fridge compartment (between your steps 5 & 6):
5a: Remove four screws that mount the base (that the compressor and radiator is mounted to) to the two aluminum standoffs and the other four toward the fridge compartment
5b: Remove one screw and washer that fastened / mounted the electrical box on the side of the compressor
5c: Gently pull the side of the electrical box where you removed the screw away from the compressor to the point where you can push it back towards the fridge so you can pull it away from the compressor to create enough room to get to the cable clamps.

Thanks again for the significant time savings.