I just returned from a camp with my family of 4 in my 100 series and I need extra storage so I bought a roof bag. It works, but is kind a pain in the ass and it is not lockable. I could buy a Thule unit, but I have a slimline roof rack and was considering buying some large hard plastic cases and drilling some holes and attaching them with bolts. Anyone have good options for more lockable, waterproof, rooftop storage.

Like anything, you can spend a little or a lot, on them.

I have had good luck with the HDepot Ridgid tool boxes, specifically the middle size one. They have been watertight even in torrential rain, on an open trailer, doing 65 for 5 hours. I was impressed.

You can also use Pelican cases. Outstanding product and performance but more pricey . AluBox is a privately-owned family company based in Denmark and established in 1999. AluBox specializes in aluminum boxes, cases, and containers, and offers a wide-range of standard box sizes to customers around the world for use in defense, industrial, emergency services, transportation, and...

You can also get a Thule cargo box . Sometimes you can get a good deal on CL.

Here's one I put on my Front Runner rack running along the PS of the rack. 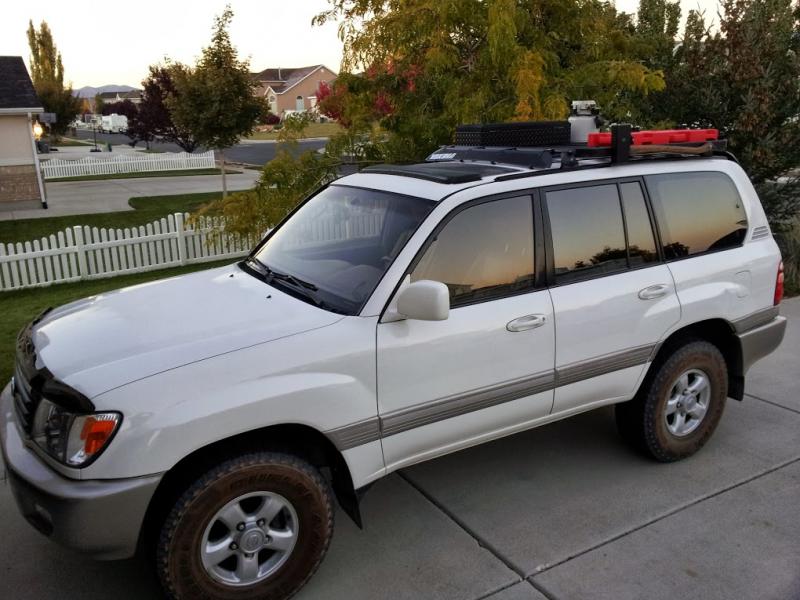 I have the same issue as you, family of four but in an FJ Cruiser so even LESS interior space than a 100 series.

I've tried it all throughout the years, Plano Sportsman Boxes, Plano Rifle Cases, Pelican 1740, Wolf Packs, etc... What I've learned, for our family at least, is to just pack WAY less! I realized how crappy and time consuming it was to set up camp so now we barely bring anything with us. We spend the majority of our day exploring anyways that all we do at camp now is eat and then go to sleep. I've also learn how crappy it is to lift up large/heavy boxes onto the roof. So now if anything goes on the roof, it will be the lightest stuff possible (pillows, sleeping bags, mr buddy heater, blankets, etc) and I would only use wolf packs (four of them still fits on the roof with the maxtrax and a 100w panel) since they're small and easy to handle, they also make decent chairs/tables.

Regarding the Plano Rifle Cases, I loved how they looked and how low profile they were but I could BARELY fit anything in them. I had a fold up table and some small camping chairs in mines and that was all I could fit really. It wasn't good use of roof real estate unless you planned on not putting anything up there in the first place then it becomes free storage but dont expect to fit much in them.

If I REALLY need to bring more stuff, I've resorted to a hitch mounted cargo carrier and I put the Pelican 1740 on it with some small duffel bags behind it. The Pelican makes an even better bench/table than the wolf packs and the hitch cargo carrier itself is a flat surface for whatever you need it for (ie, another table)

Lastly make sure you use up all the little nooks and crannies you can find in your truck, I've stashed 2L nelgene bottles to the side of the backseats near the floor, there's work lights stuffed in where the factory jack it, there's an ammo can with a bottle jack under the hood, there's a snatch strap under the driver seat and a pair of shackles and a small jump started under the passenger seat, there's molle panels on both front seats with pouches on both, there's visor storage, a bigger center console (Tuffy Box), etc...