Going on a short trip, and removing a drop bracket lift!!

Hello all, this shall be copied from another board I'm on. Why not share it everywhere!! Hahahaha!

Right now I'm on vacation. This is the first time I've had two consecutive days off in almost two years, so I'm taking full advantage of it.

To start off, this is my baby. An exceptionally low mileage Toyota Tacoma 4WD 5-Speed that is getting ready to turn 20. It started out as a weekend offroader, but since I live 5 miles from work, it has turned into my daily driver. I love it. Some may remember a half day getaway from this thread:

Most ride great on the street, however they perform terribly offroad, and introduce multiple potential points of failure into a damn near perfect setup. My goal during my vacation is to remove (and go back to a stock style lift) the drop bracket, and do some touring.

Here's my ute before: 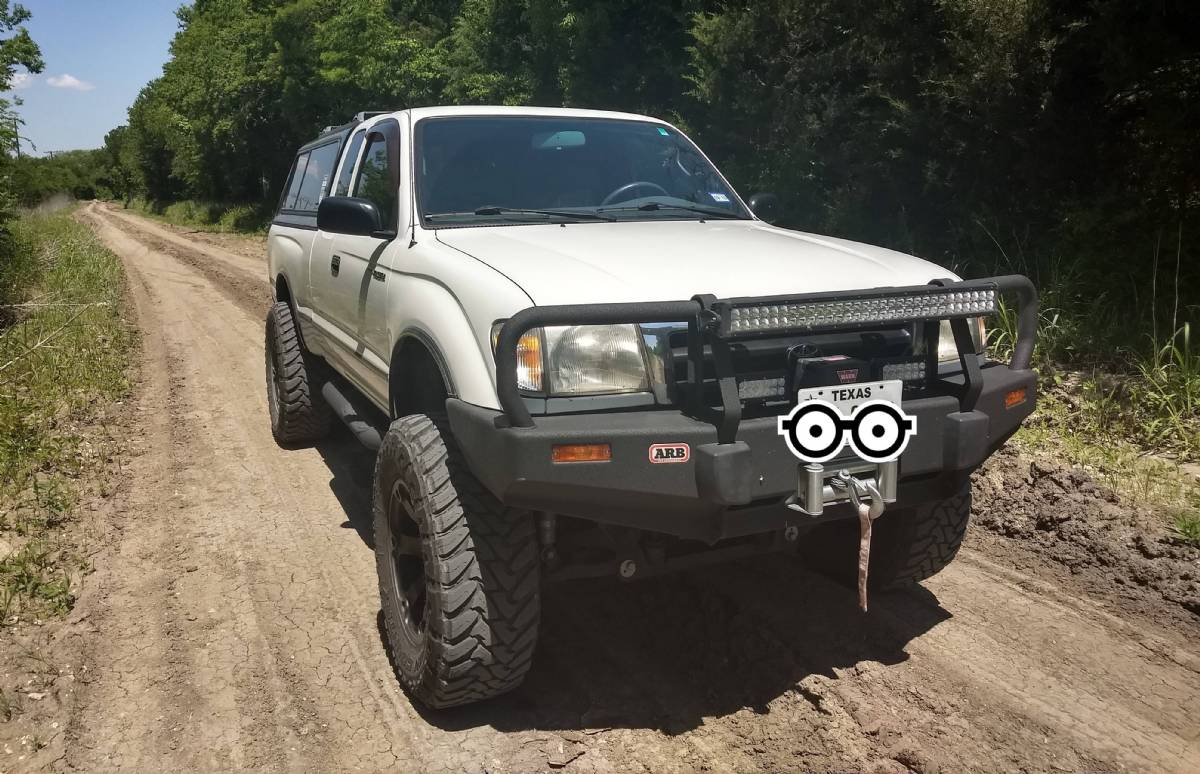 You'll notice that even though I had much larger tires, the distance from the ground to my front cross member is minimal. When it comes to passing rough trails or going over obstacles, I would get hung up on everything and put an immense amount of stress on the frame, hence the reason to go back.

There is one shop that I trust with my vehicle, and that would be Tandem Offroad. @TandemOffroad on Instagram and you can find their website here:

They are a specialty TOYOTA and LEXUS offroad shop ONLY. They know their craft exceptionally well, and they take an immense amount of pride in their work. If you ask anyone with a Land Cruiser, 4Runner, Tacoma, or Tundra for a recommended shop, Tandem's name is always the first to make an appearance, and it is the name said over and over. It doesn't matter if you have a Tacoma like I do, an overseas Hilux ute or surf, petrol or diesel, FJ40, 55, 60, 80, 100, 105, or even 200 Series Land Cruisers, these gentlemen will take care of you, and do what you need.

So, to start my day: I loaded up my truck with everything that I would need for a multiday touring trip. Camp chairs, tents, spare fuel, recovery gear (getcha snatch out! :rofl and etc. All batteries were charged and ready to go.

I began my journey east of DFW Texas where I reside, and filled my ute up to the top. Thank you Kroger fuel rewards points and I could take $0.40 off per gallon! 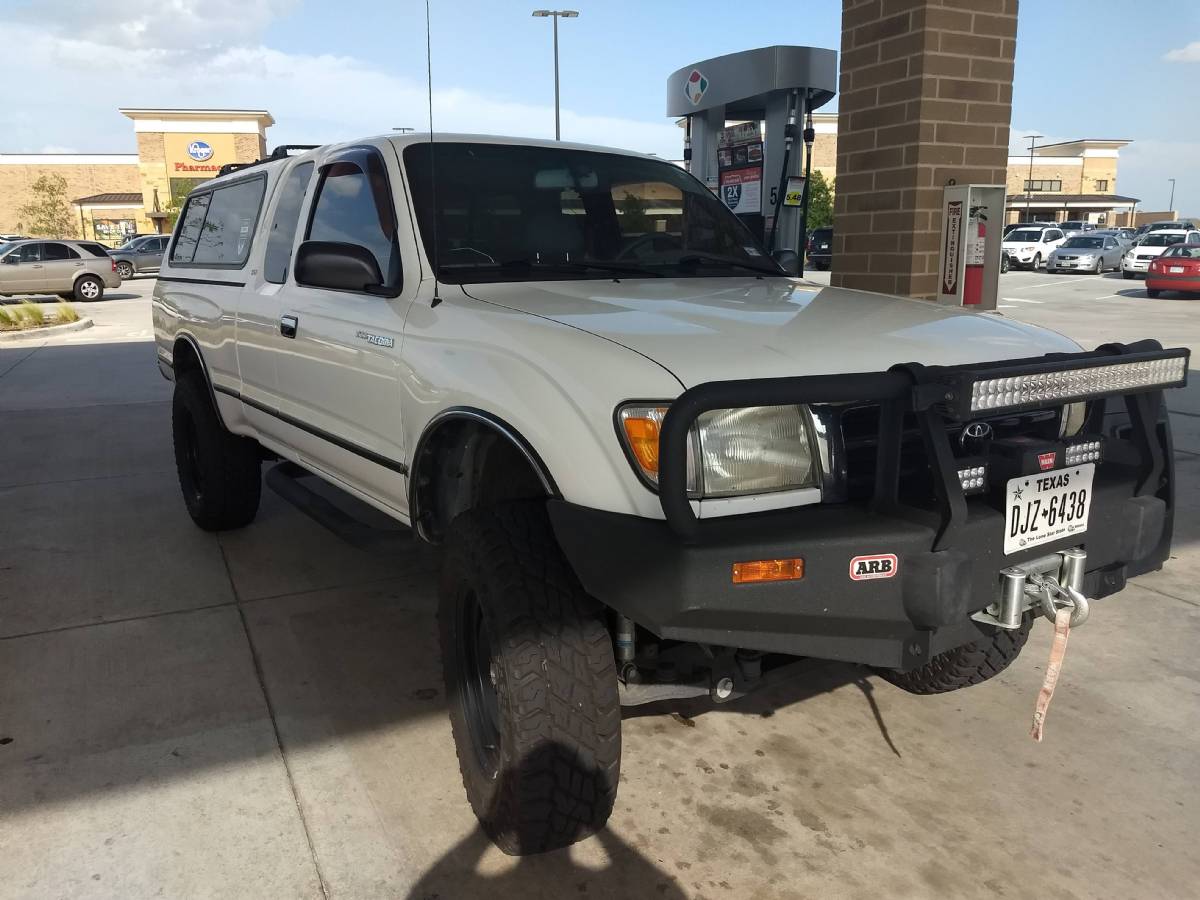 Next, I drove an hour and a half through the cement maze of DFW, to arrive at my hotel, The Hilton in Ft. Worth, Tx. It was a nice place, don't get me wrong, but damn. It is truly nothing to write home about. 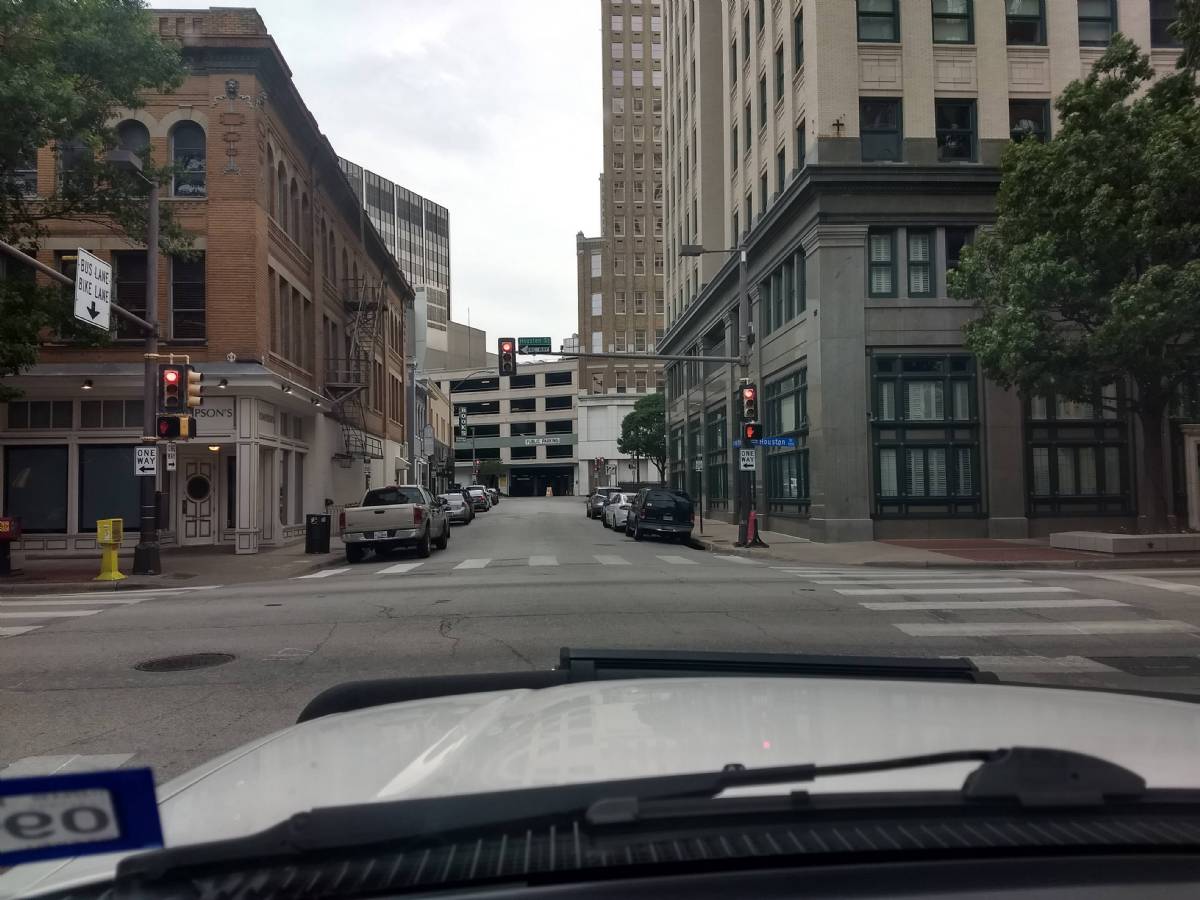 I unloaded my two backpacks carrying my clothing and dopp kit, as well as a few devices to ensure my personal safety in the city and while out exploring.

Now .... where to park? Street parking? HELL NO! 10 minutes later I found a garage with a $20 overnight fee. Not too bad as it was staffed 24hrs per day. A younger attendant drove up and offered to take and park my vehicle. DO NOT LIKE. I have a fair bit of specialty equipment in my transmission, and with the drivelines of the garage, it would NOT take long for something to go wrong. I don't let anyone drive the truck, not even the folks at my own service department!! :lol:

After multiple requests to park my own vehicle, I gave up, as it was against their policy. Fine. I relent. "Sir, can you drive a stick shift?" .... "No. Can you teach my right quick so I can park your vehicle?" :rofl::rofl::rofl::rofl::rofl:

After a quick understanding, I was able to park my own vehicle, and keep my keys with me. Back to the hotel. 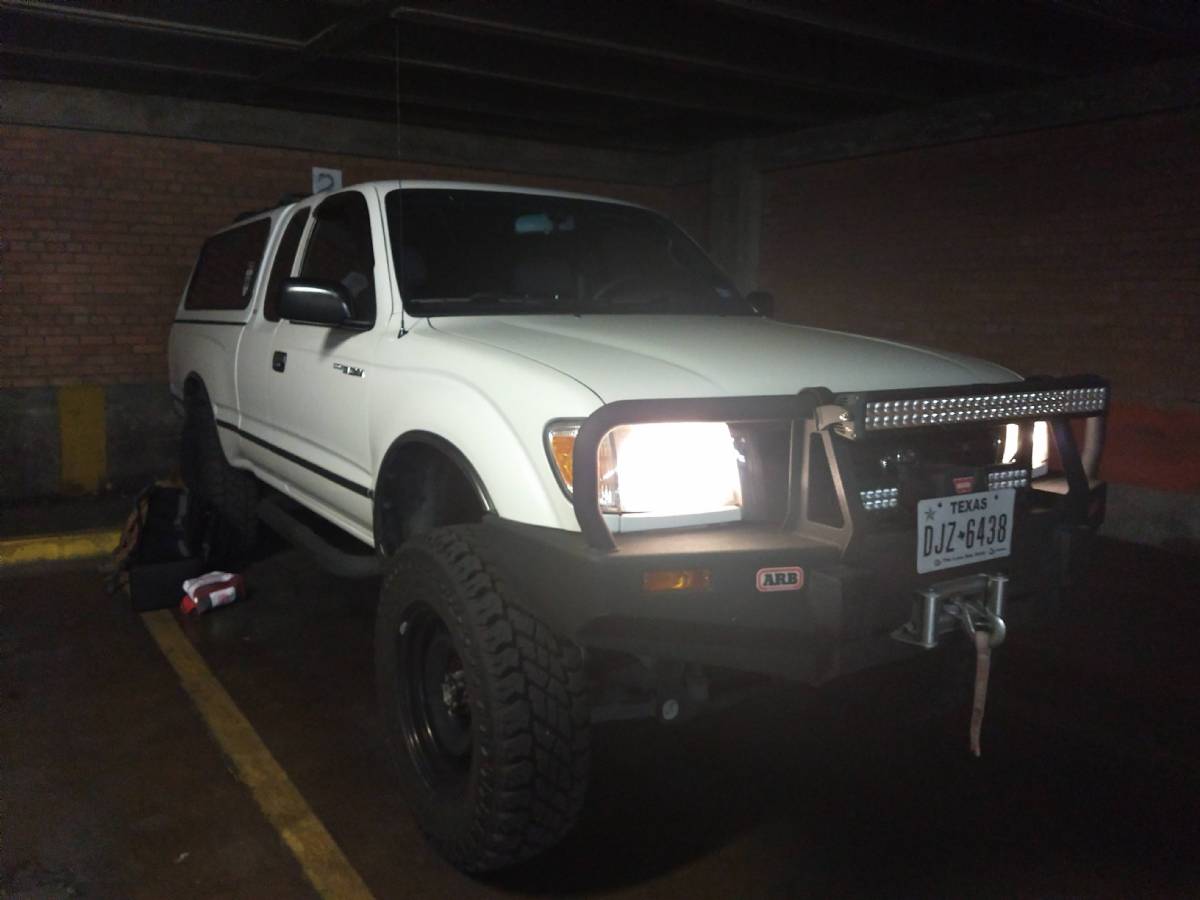 I cozied down in my room, took a shower, then went for a quick meal in the executive lounge. Not terrible, but nothing exciting. 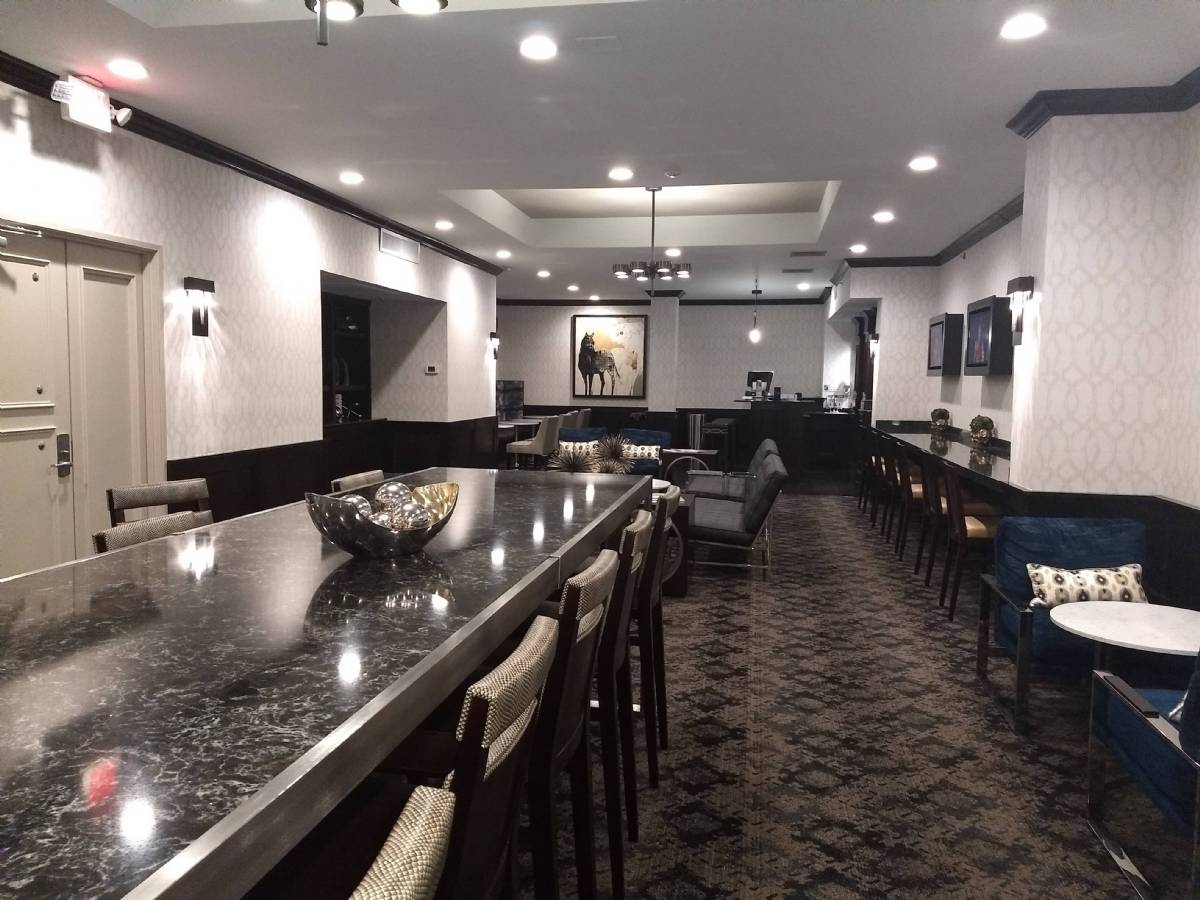 Soon I went to the Sundance Square, and toured the local watering holes. Whisky was poured, women were met and no pics were taken. Probably for the best :agree:

Sadly, as I made my way back to the hotel, I was accosted by several vagrants. First time I've encountered any of these folks. Most soon realized it would be in their best interests to keep a reasonable distance away from me.

Back to the hotel, a few more refreshments, and 50* room to keep me cozy. I was going to soak up all of the A/C that I could!

The next morning, it was off to Tandem Offroad to have my ute taken care of. I'll skip the story involving the parking security and the retrieval of my vehicle unless y'all would actually like to know.

I was looking for the correct shop, and soon I saw a friend's Tacoma in the parking lot. I knew I was in the right spot. Here's some of the vehicles at Tandem at the moment: 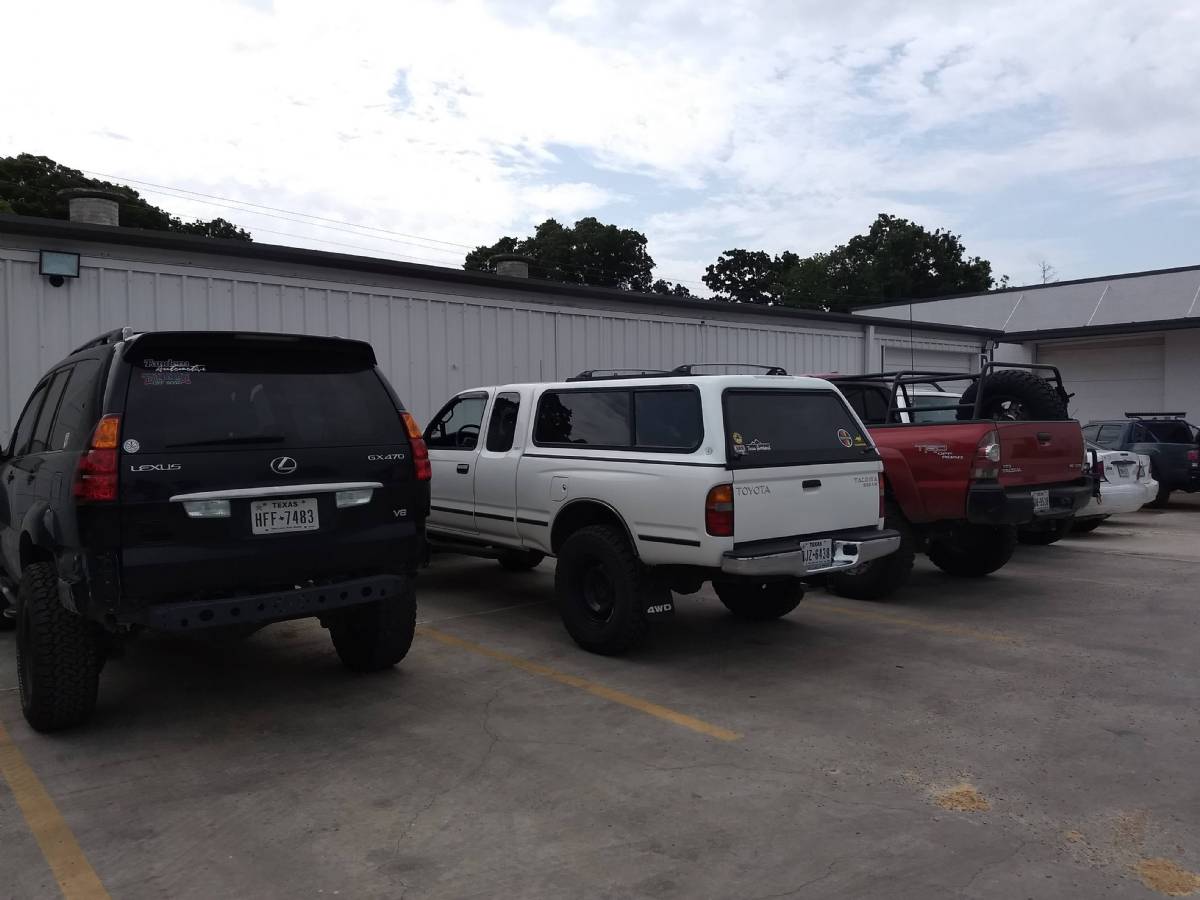 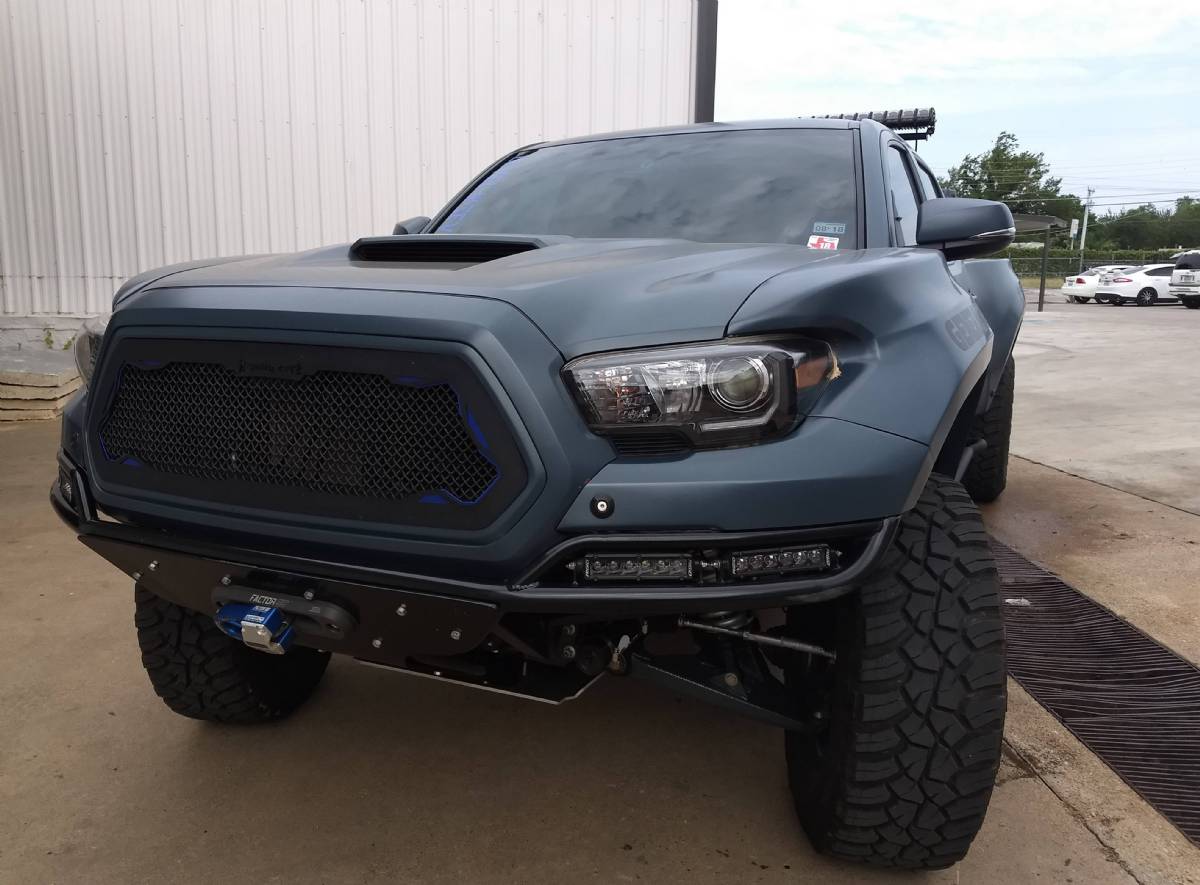 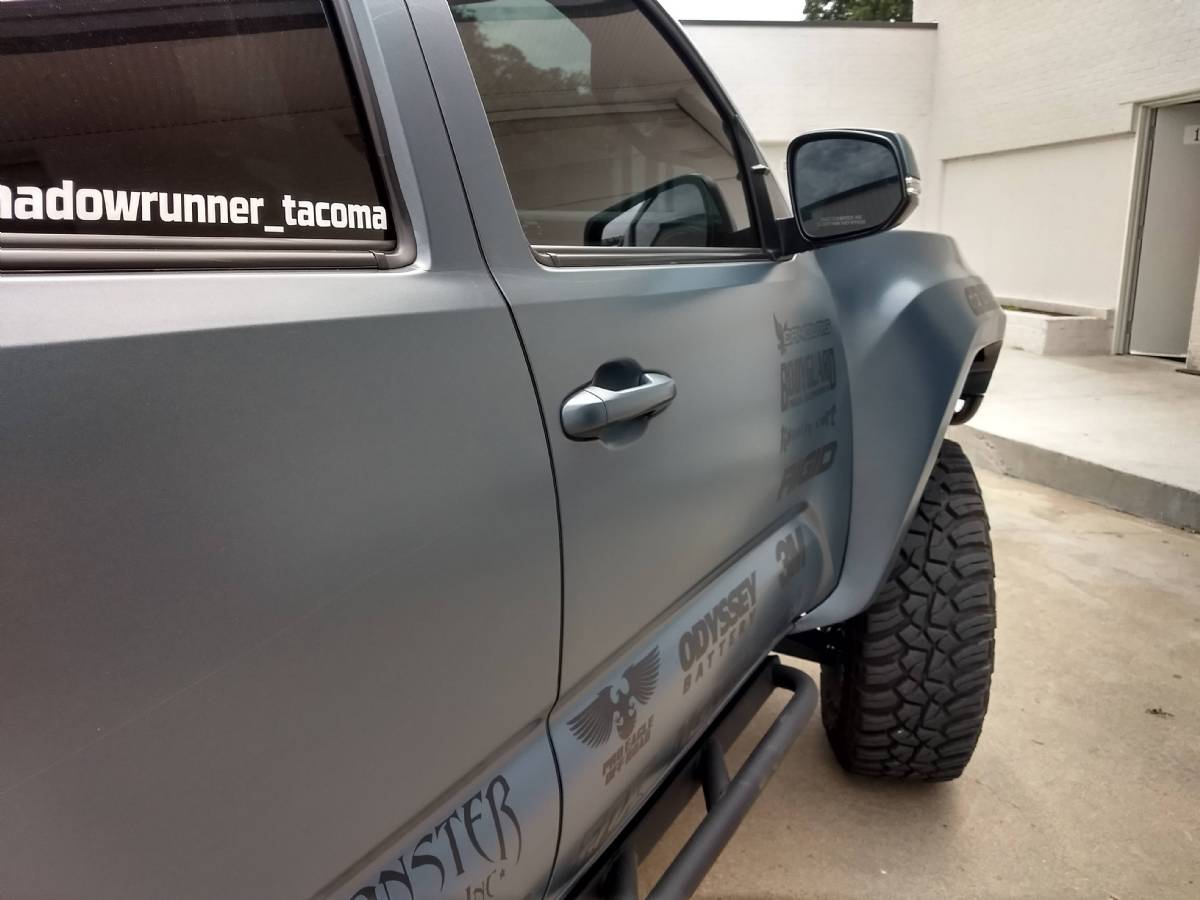 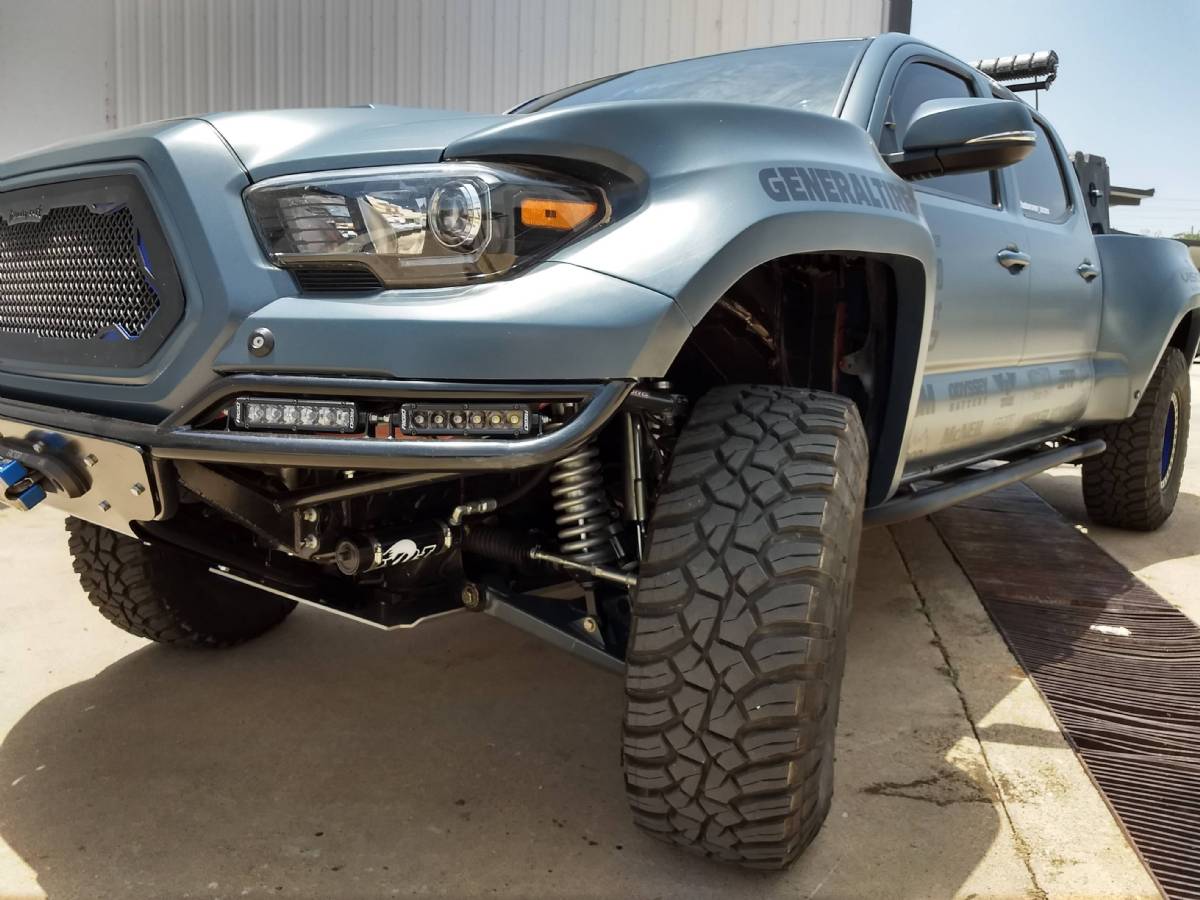 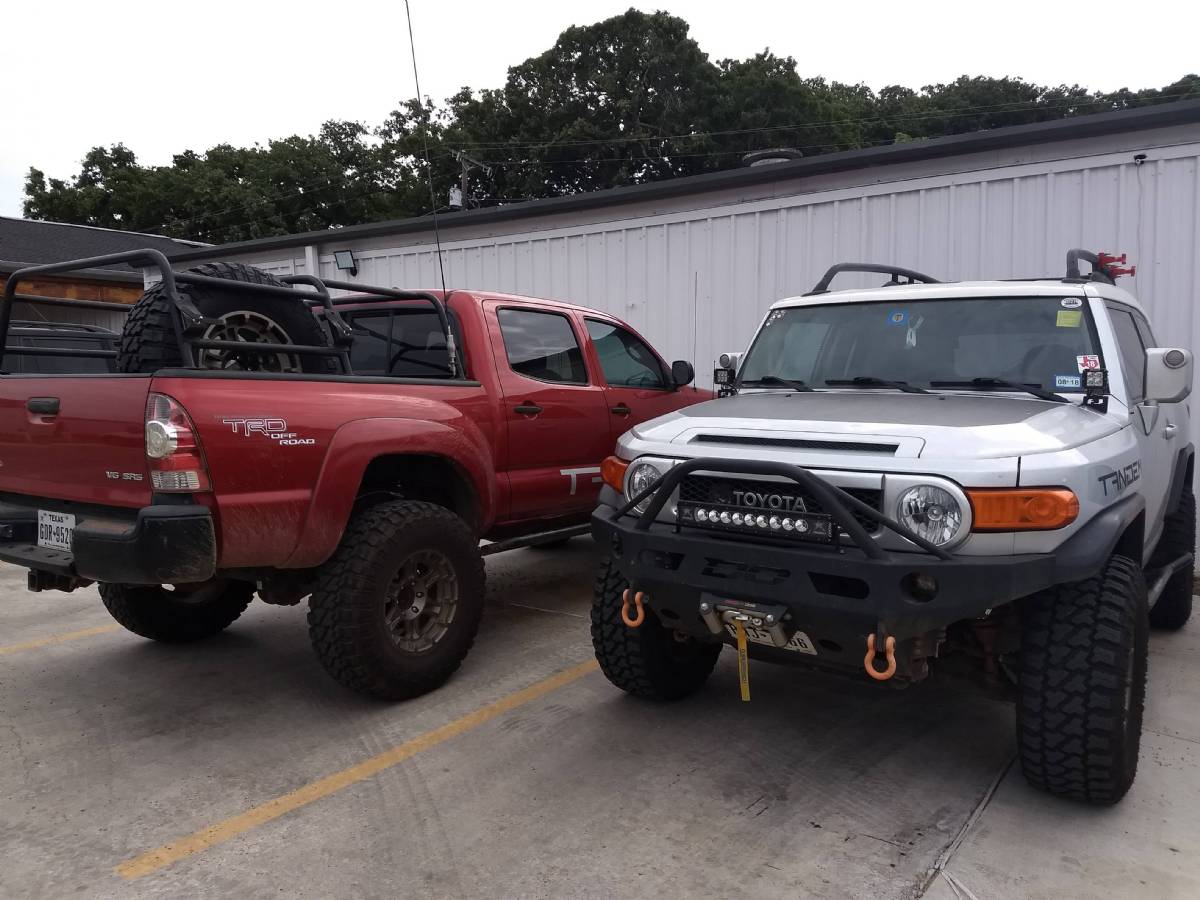 Both trucks are running Tandem Offroad's Custom Model 612 Wheels, and they are sweet. The wheels are custom made by Tandem, for Toyotas and Lexus trucks. They are 17" wheels, and have the perfect offset and backspacing.

"The outer lip has been given additional thickness for to resist gouges that may be encountered during low PSI conditions. The 12 ridges on the outside have been placed there in order to protect the valve stem from damage. The six spoke design offers excellent strength."

A supercharged Lexus LX450 (also known as the Lexus version of the Land Cruiser): 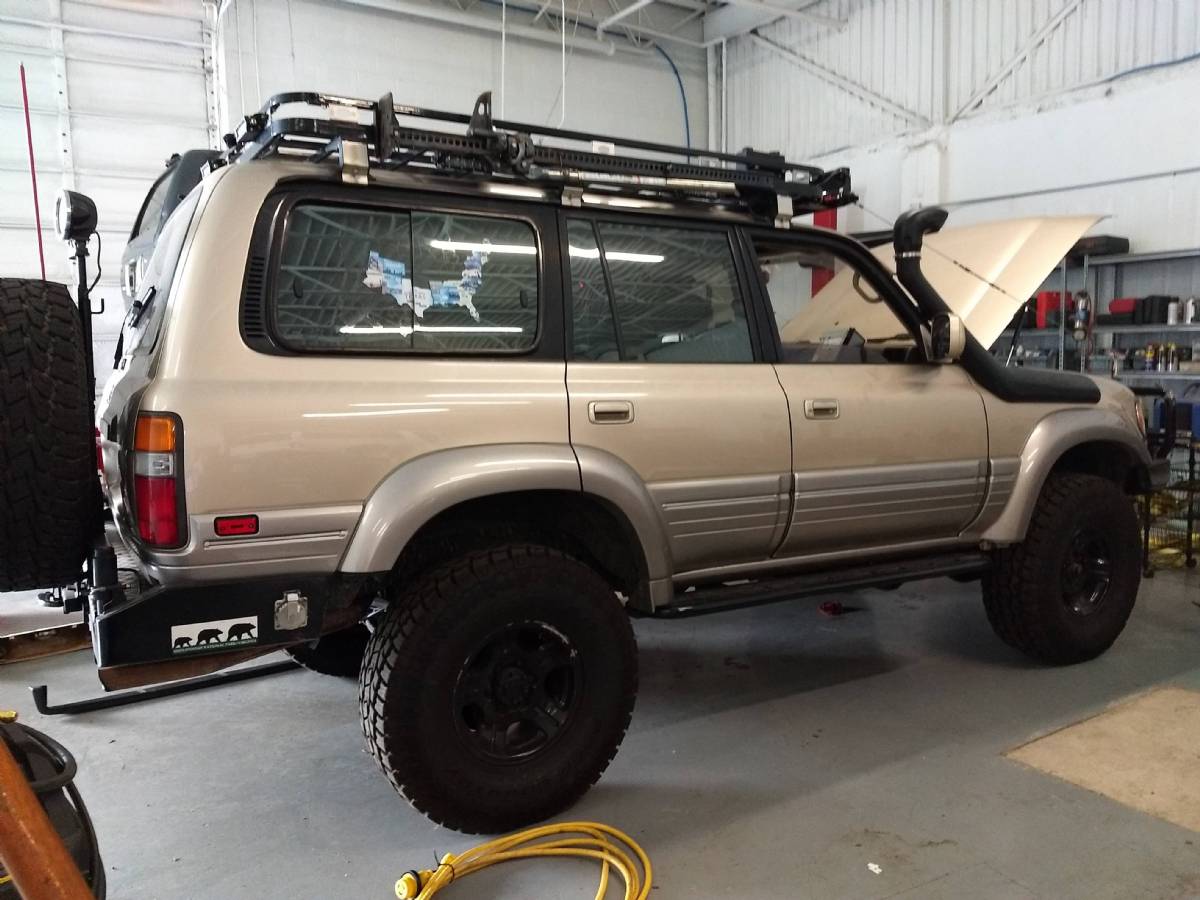 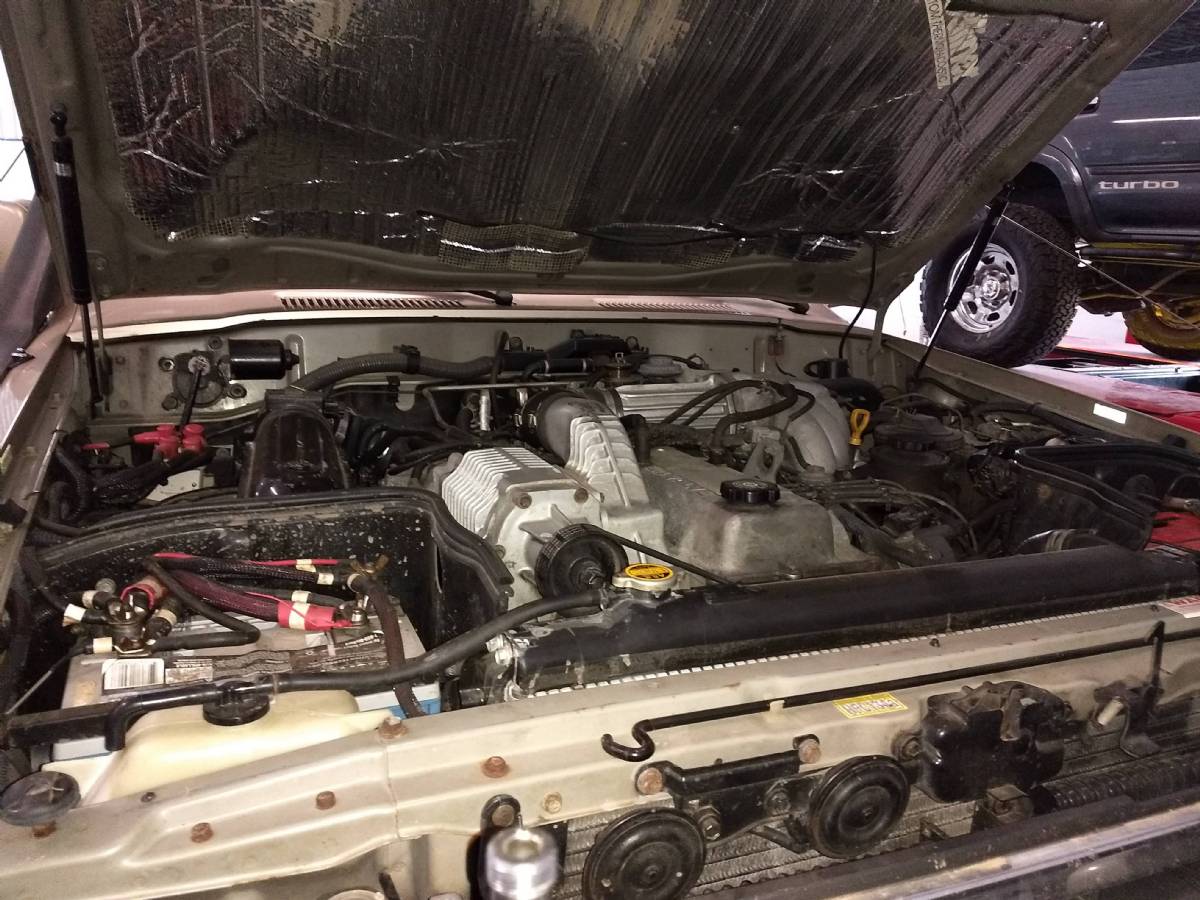 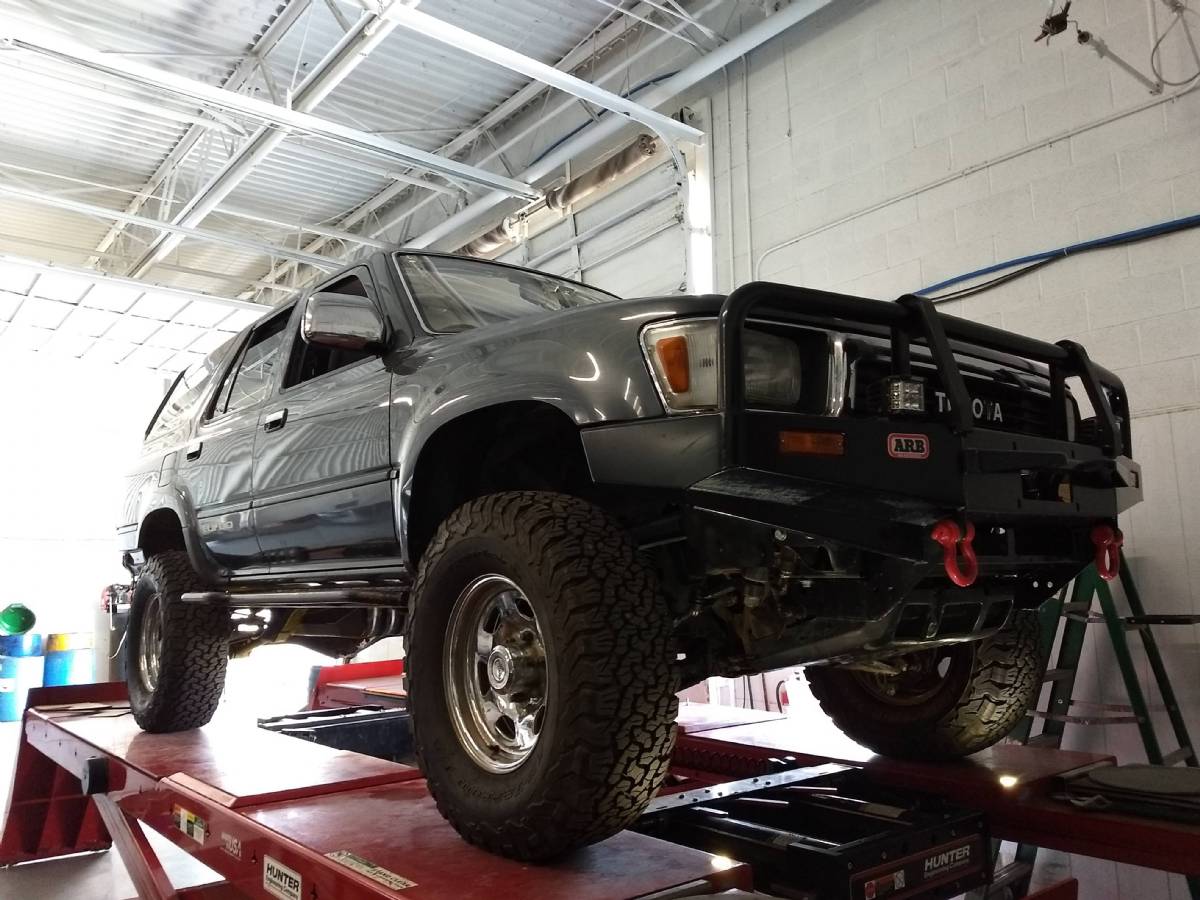 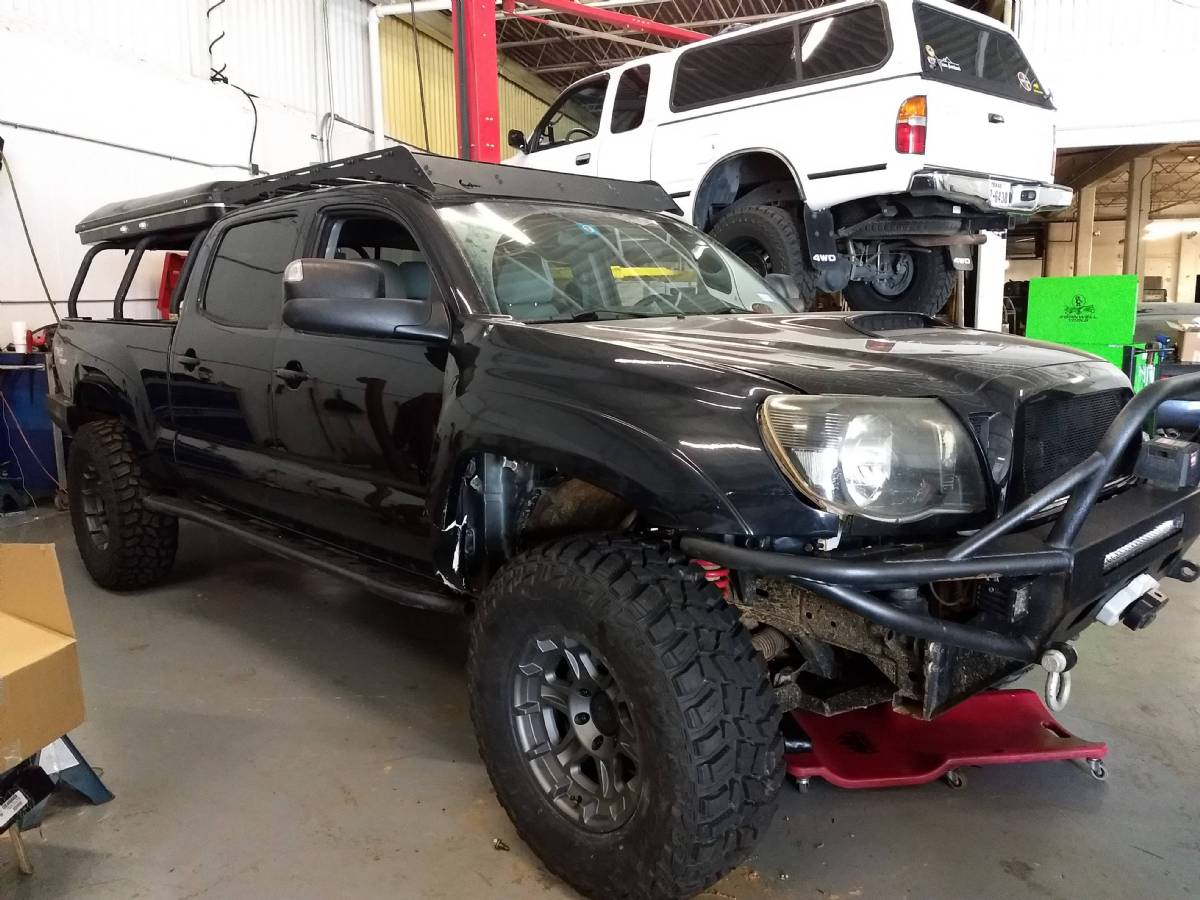 As soon as I arrived, the pros at Tandem Offroad started going to work on my Tacoma. Before I knew it, or even though to grab pictures, my ute was in the air, wheels off, rotors on a table, and LCA's were nowhere to be found!! 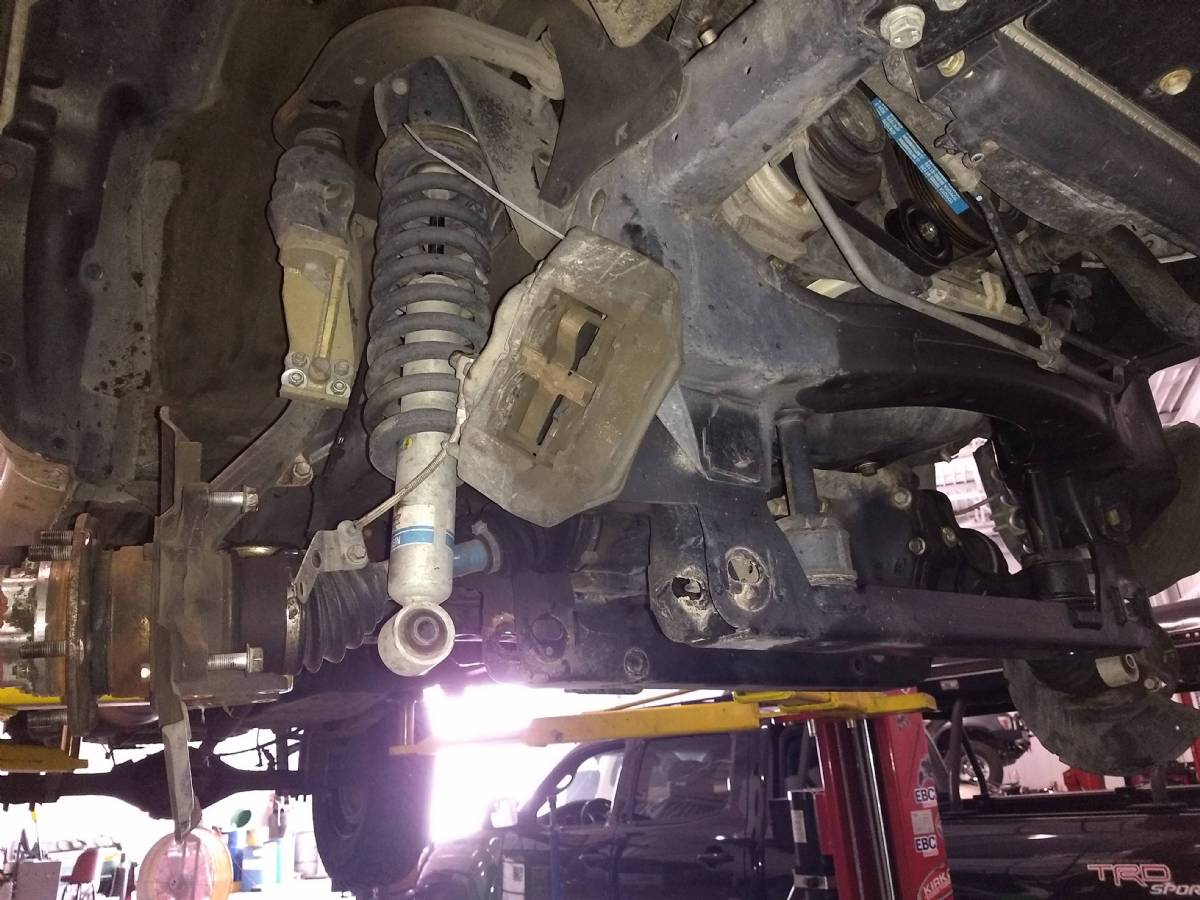 The front rear cross member from the factory had been cut to allow the drop of the differential. You can clearly see it here. At this point also, they had removed the rear aftermarket crossmember that is a part of the drop bracket lift. 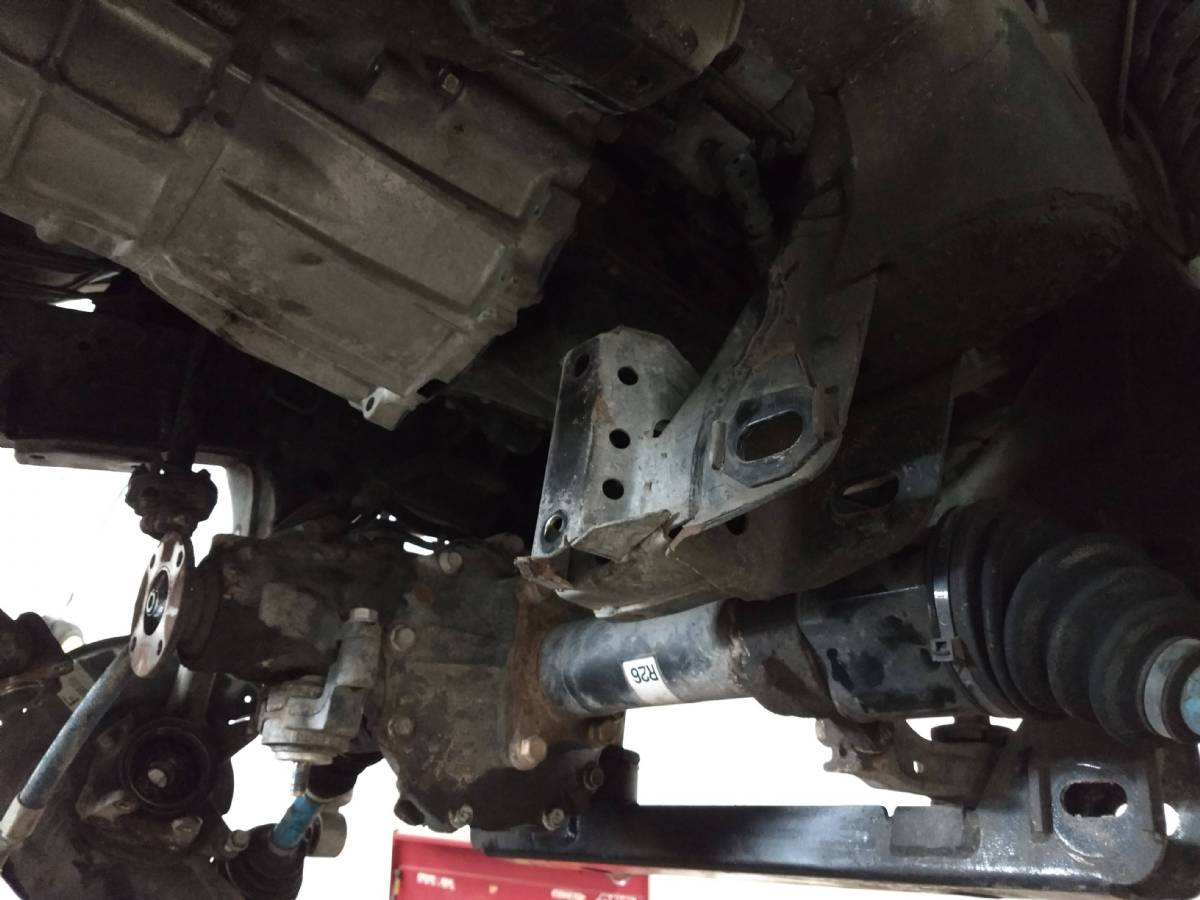 Here Pablo, Brandon, and Alex are removing my front differentials and axles, as well as the front crossmember: 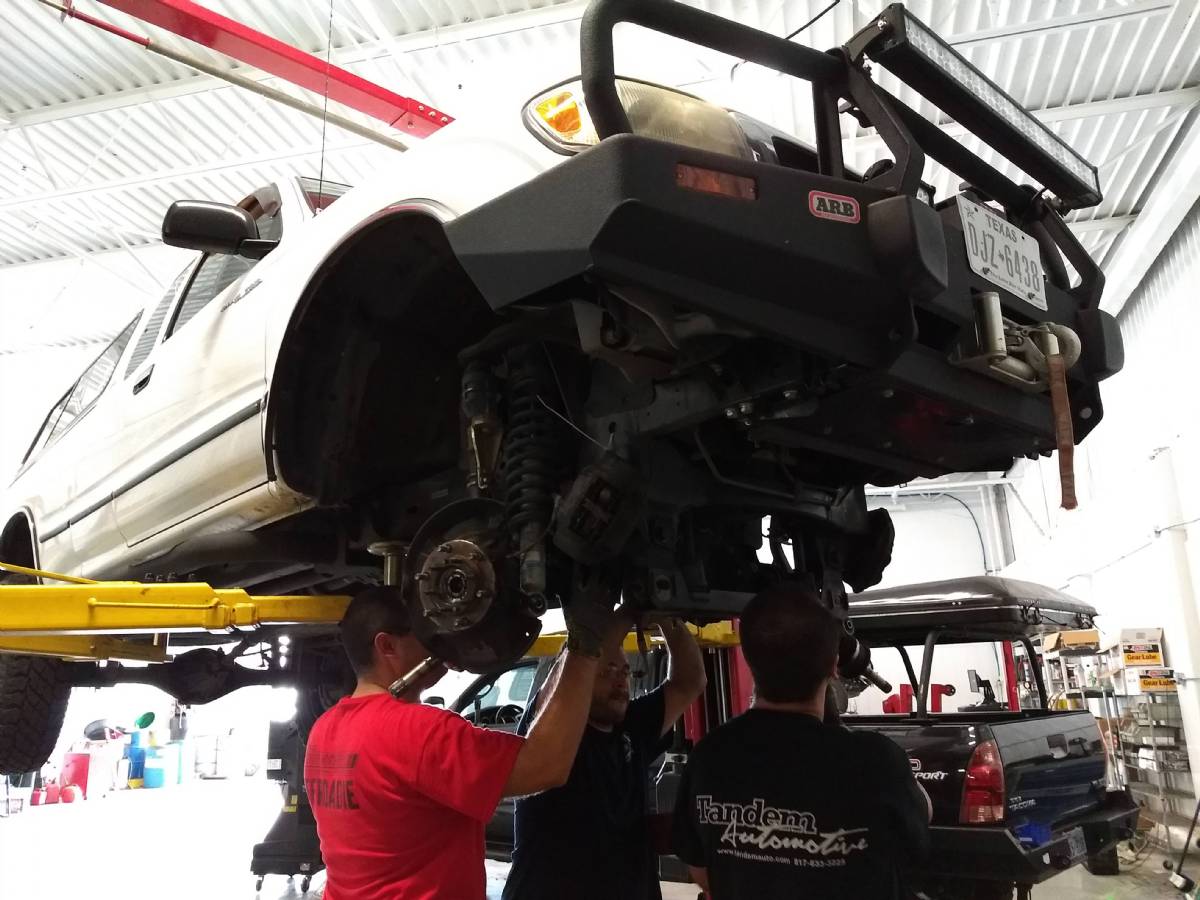 Yes, there are multiple stands in place to ensure the safety of the vehicle, parts, and employees, I just didn't have the best angle.

My front differential and axles, along with the front crossmembers of the drop bracket lift. 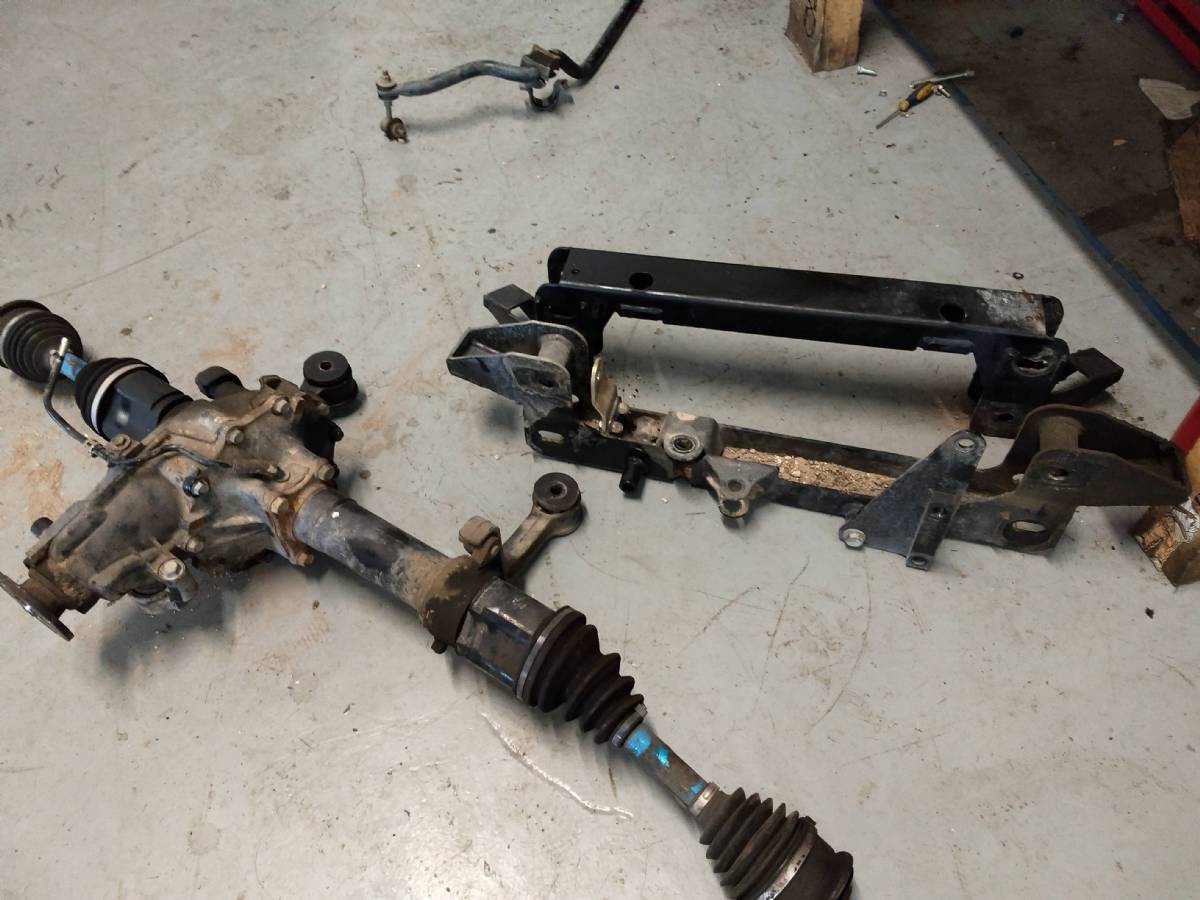 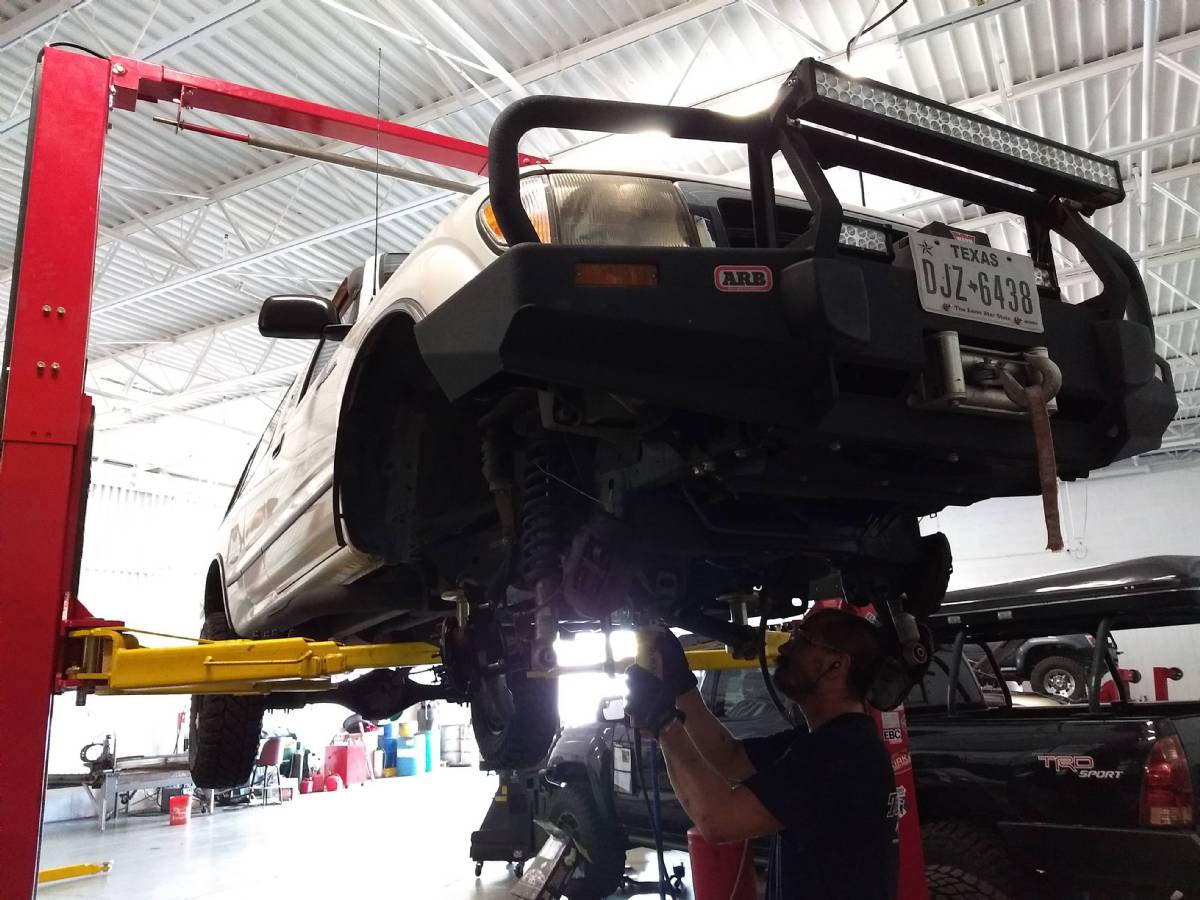 You can see here that with the remove of the diff drop and the aftermarket crossmembers, about 8" of ground clearance should be restored to the taco. 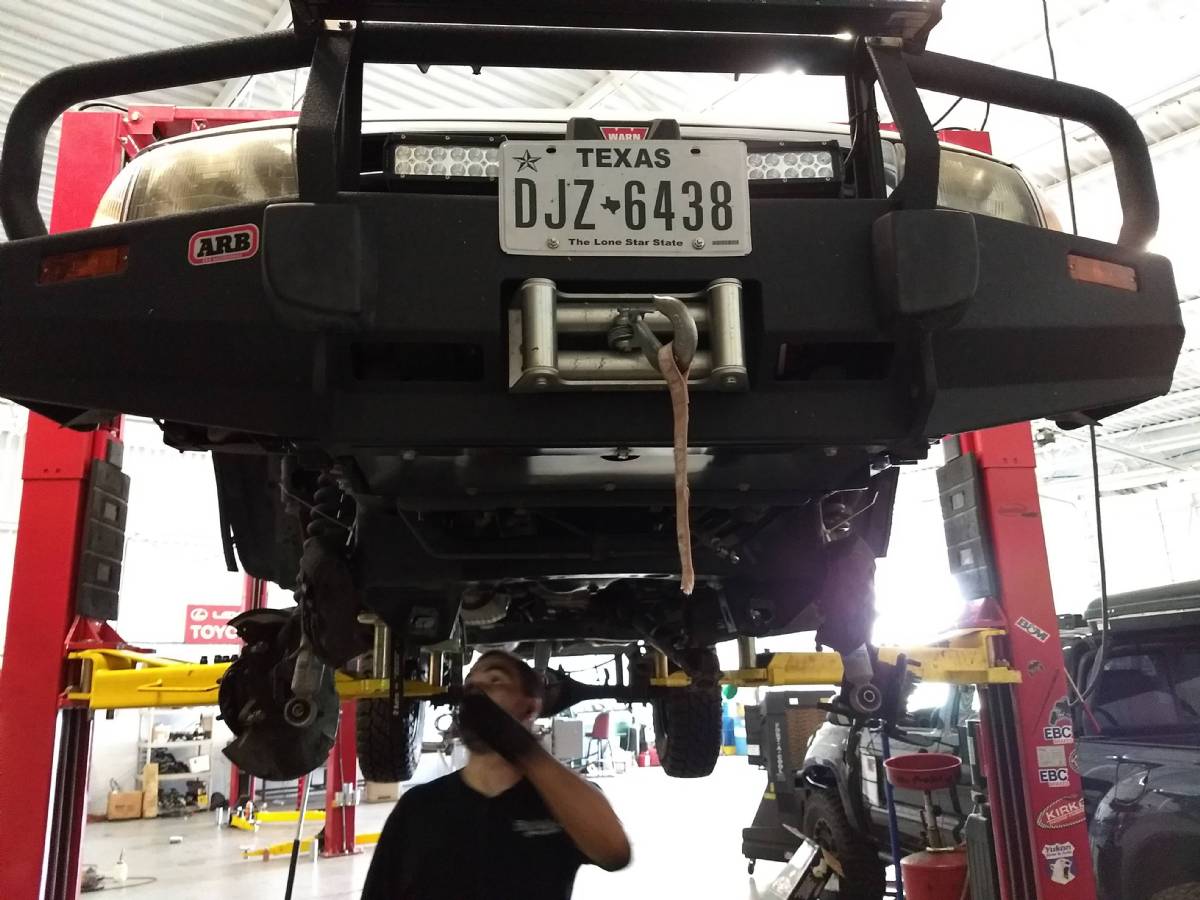 Back to the hotel, as well as the bars, and again, no pics to be had :dude: everything's getting recharged and up and filled to the top! 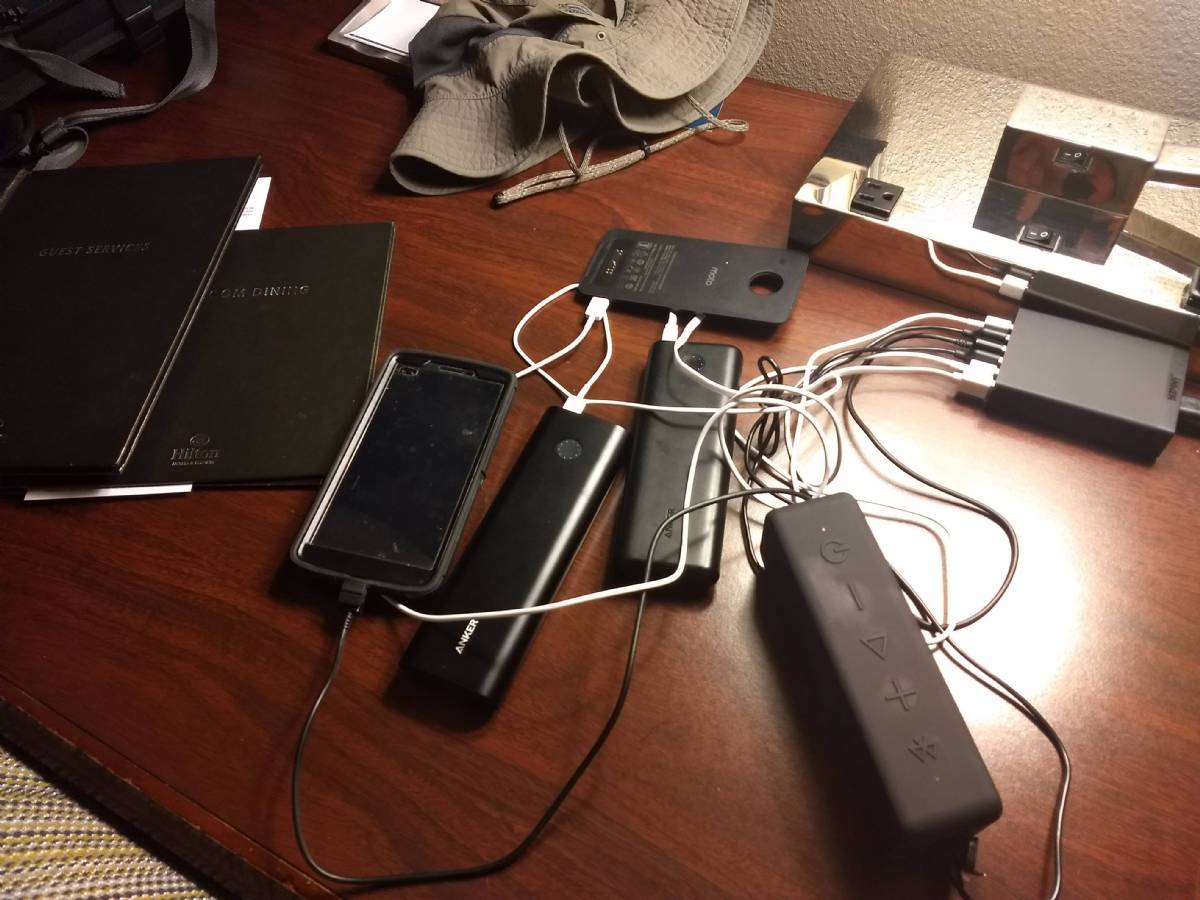 Day two of work being done-

The new front rear crossmember has been welded in place, and everything is shaping back up! You can't even tell that the crossmember was cut out in the first place!! These guys do awesome work!! 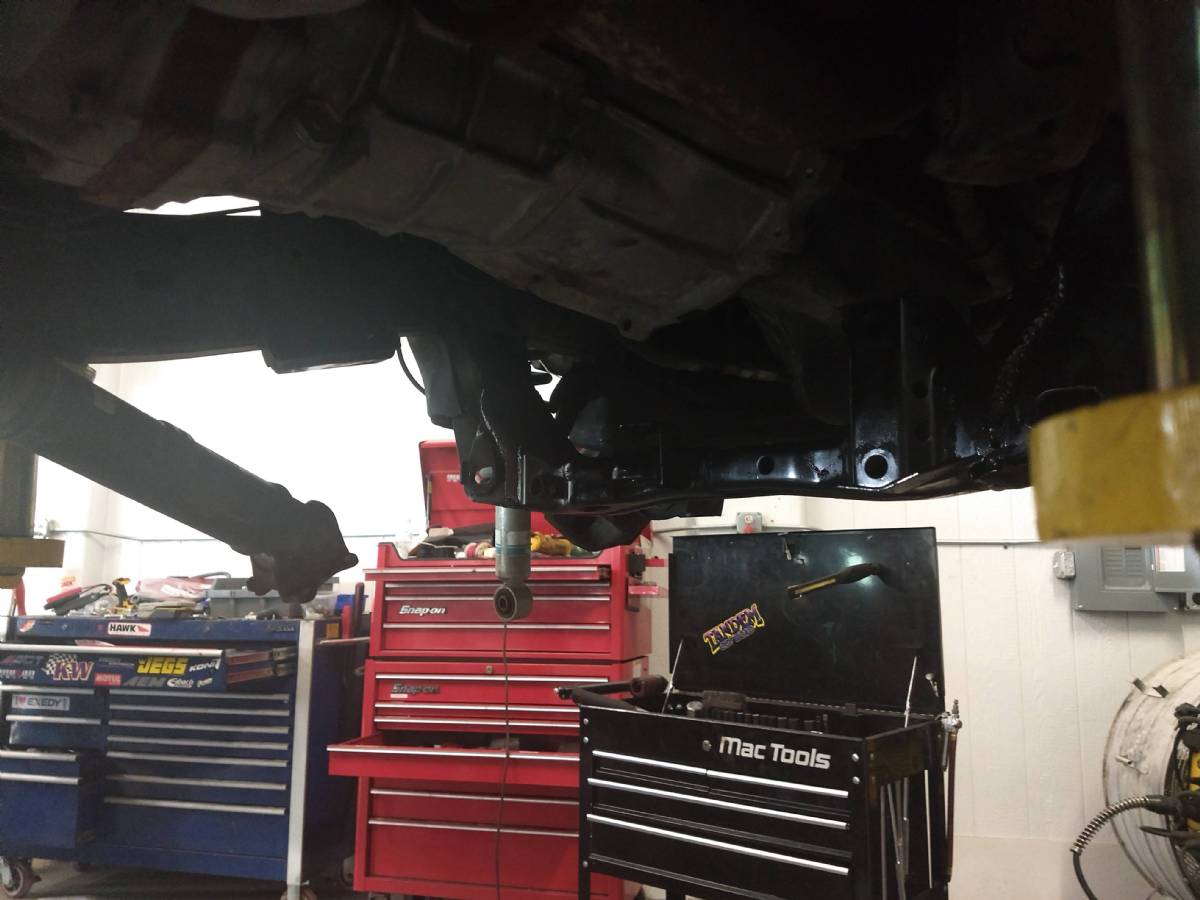 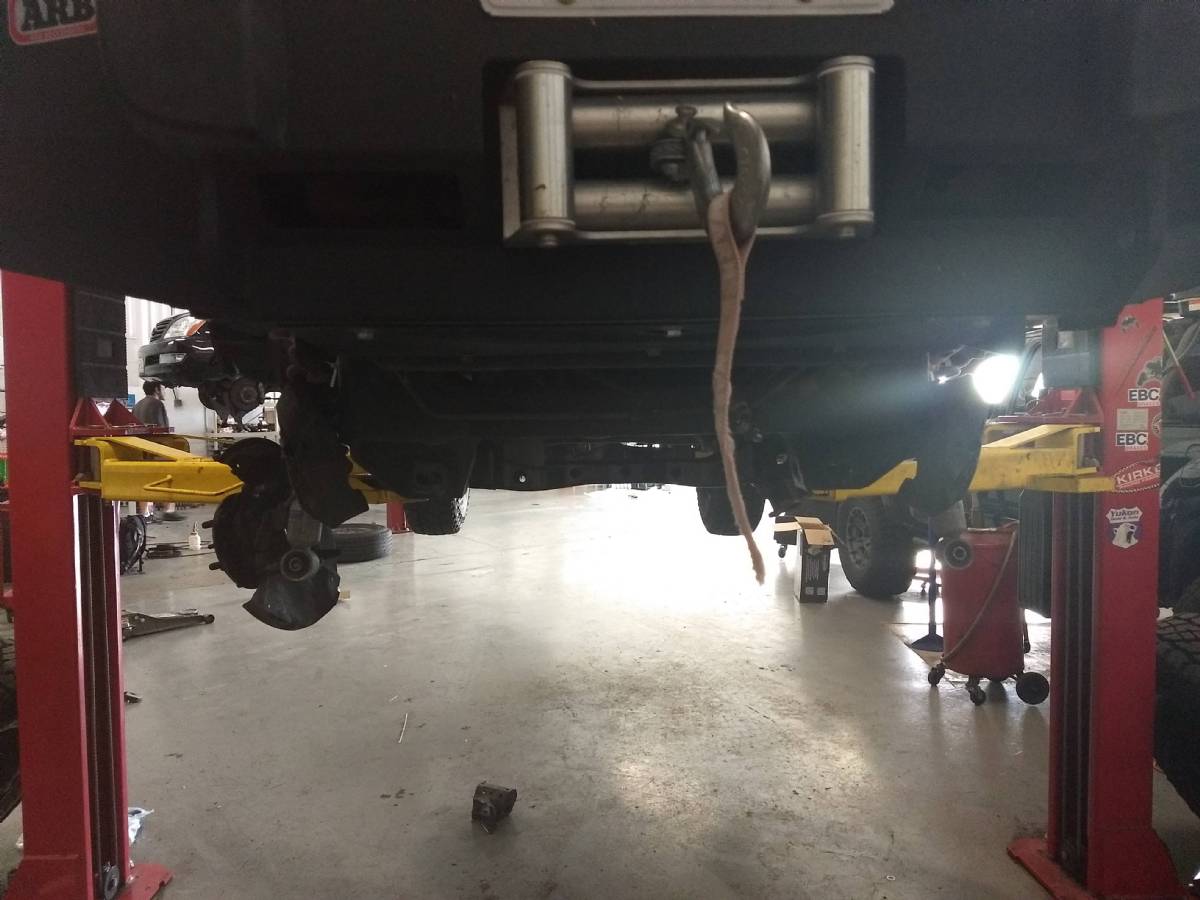 More updates shall come! Thanks folks!


There it is!
View attachment 2754322
There wasn't a lot of picture worthy work going on today, but today we moved the spindles, and spindle spacers. Also removed coil spacers and installed the new Eibach/Toytec coils and reset the Bilstein 5100's. Not only that, but we also installed new upper and lower balljoints as well!!


Here's my front differential and axles stabbed back in! 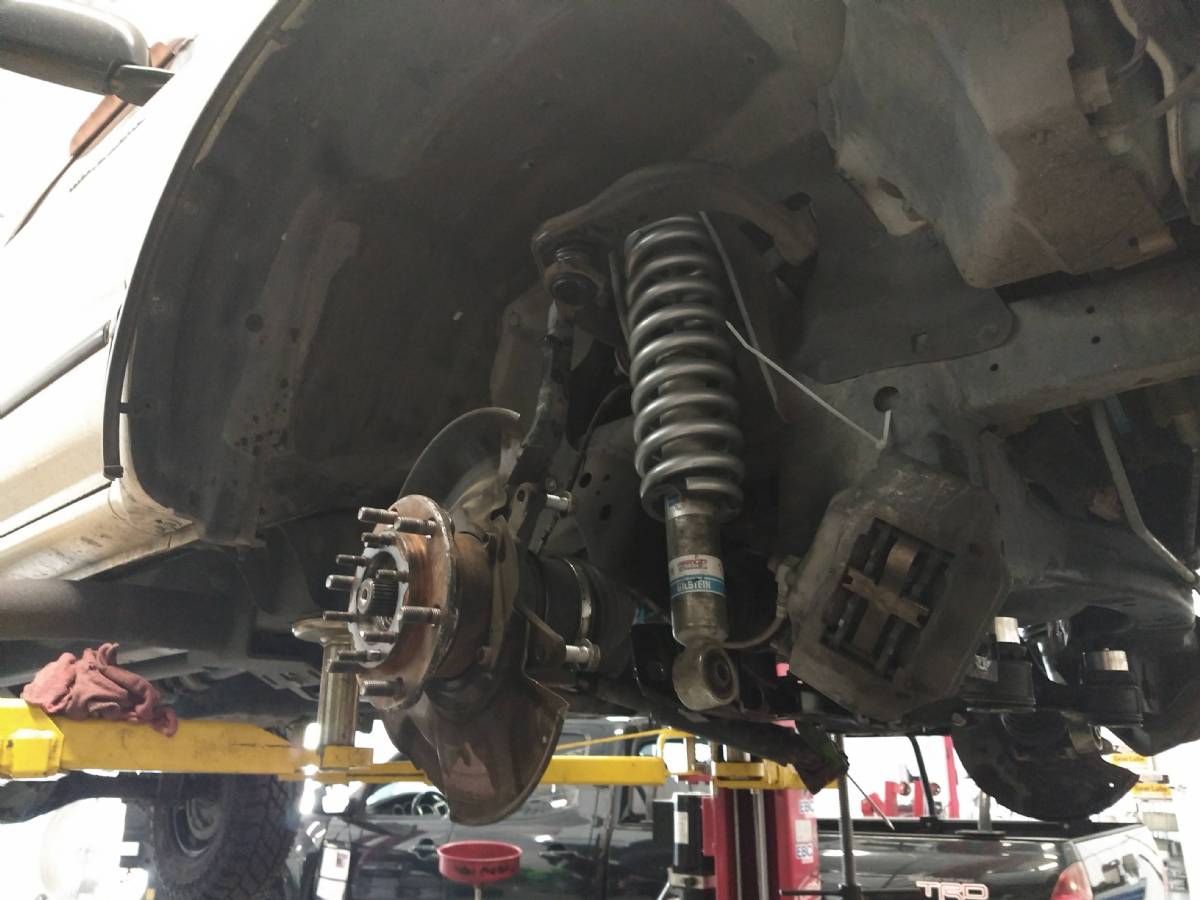 and now with the lower shock mounts bolted in and the lower control arms attached! 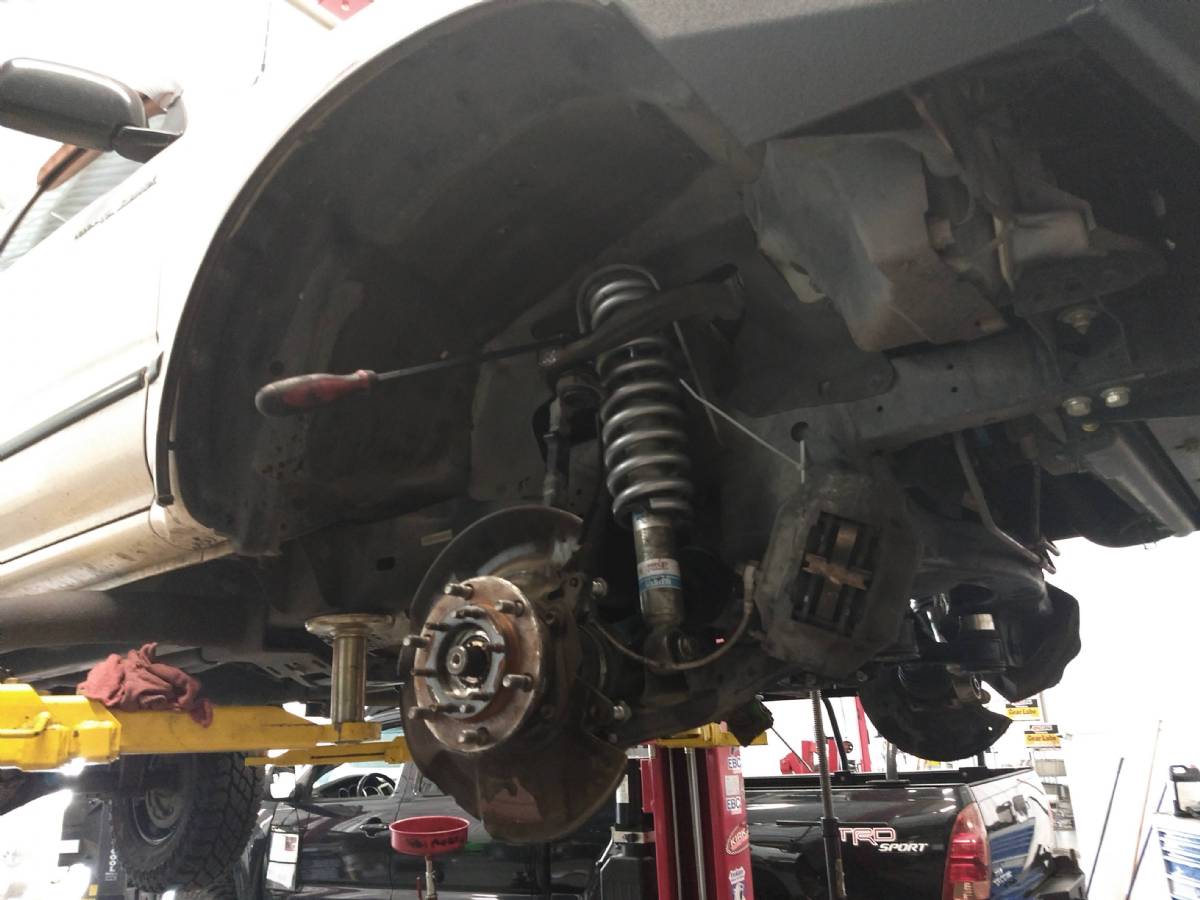 You can see here that with the remove of the diff drop and the aftermarket crossmembers, about 8" of ground clearance should be restored to the taco.
Click to expand...

I get the idea of going back to stock... but the above statement is odd. You're not going to gain an ounce of ground clearance....

How is that so?

How is what so? Your ground clearance under the front is based on tire size, not lift.
L

I think the cross member drop lifts hang a good amount lower than the factory cross member. 8" does seem like a lot though.
C

bkg said:
How is what so? Your ground clearance under the front is based on tire size, not lift.
Click to expand...

If the drop bracket is the lowest hanging portion of the truck and he removes it he just gained clearance. Even if the rear diff is lower he still gains a lot of extra clearance on the front end. Maybe not 8” but it’s still a noticeable difference.

bkg said:
I get the idea of going back to stock... but the above statement is odd. You're not going to gain an ounce of ground clearance....
Click to expand...

He'll gain a little. With the drop bracket the lower arms would have been like stock and no lift, basically flat across the arms and cross member. With lift and no drop bracket the lower arms will be angled down and the cross member raised. It'll be a couple of inches higher in the middle than before but he'll also have less lift (I'd think 2" less) due to the limits of ball joints, alignment and CV axles. 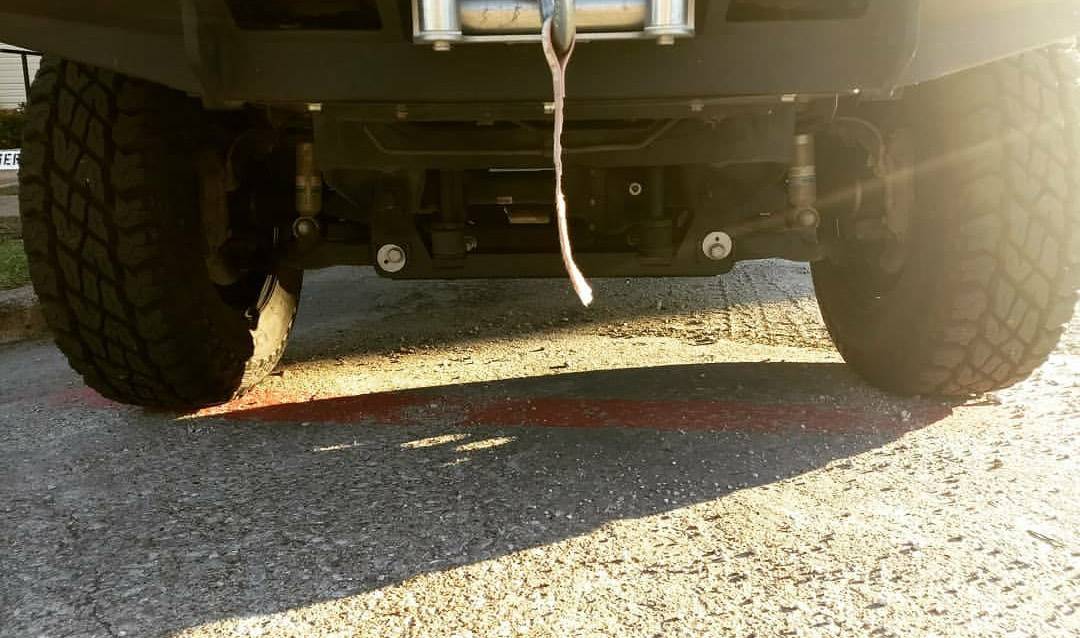 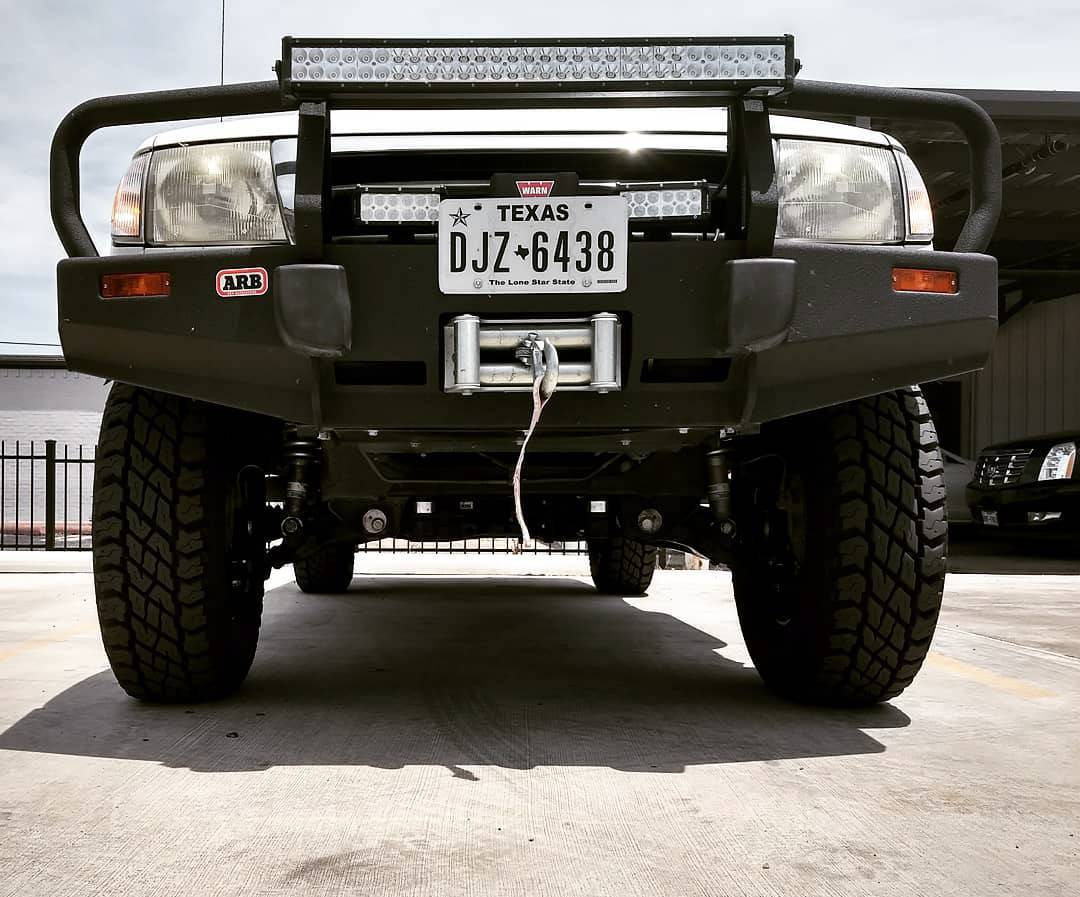 Well you certainly can't say they shorted you of any lift.

Loubaru said:
I think the cross member drop lifts hang a good amount lower than the factory cross member. 8" does seem like a lot though.
Click to expand...

I haven't done the exact measurement, I was simply just running an estimation. Without the installation of the diff drop, my estimate would be close enough to be called correct. With the diff drop, it lowered my diff mounts just a touch.

Now, everything is exceptional. Only about an inch was lost overall (billie/eibach combo).

DaveInDenver said:
Well you certainly can't say they shorted you of any lift.
Click to expand...

No sir!! Everything went exactly as planned and designed! Roughly an inch was lost overall .... So I won't be able to go to 35's without cutting

The 33's and steelies fit perfectly as well, with no rubbing.