Just came across this article on Twitter with a fully electric f150 towing a train estimated at around 1 million lbs. is this a game changer? I know ford invested like 500 million into Rivian which expo had an article on not too long ago. Thoughts? 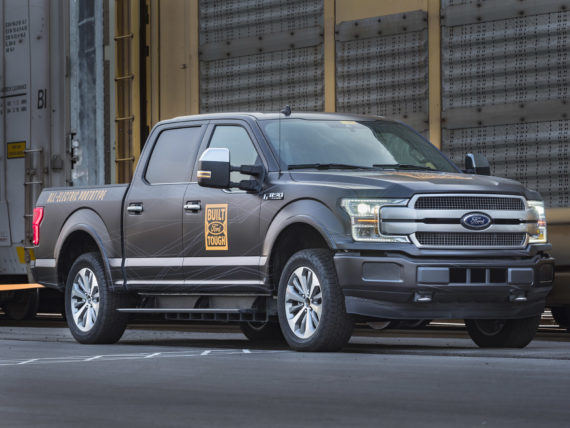 Ford released photos and a video featuring a sneak peak at an all-electric prototype Ford F-150. Will an all electric Ford F-150 expected to reach market in a few years be the EV to spur huge growth in EV sales in the US?

I don't think that's impressive though. How about an electric pickup truck you can take on 3 day off-pavement weekends without having to specially plan on re-entering a major city?

Last time engine torque was the limiting factor on any task I wanted to accomplish it was because I had an 80s econo car and wanted to achieve the speed limit. We're past that now.

If somebody wants to sell an electric pickup truck it needs to have a modular, as-universal-as-a-USB-port socketed generator/range extender. I'm talking about a 12 inch by 15 inch rectangular hole in the side of the vehicle with a door and with electrical contacts at the back and you can just slide in a gas powered generator, and when you're not using it in your Ford pickup you can pop it out and slide it into your Toyota sedan or your Chevy minivan. And your generator could be made by Ford or by Mitsubishi or by Kraft Foods or Black & Decker.

Anything short of that is a waste of my time, and I don't have time for businesses who don't respect mine.

Towing the train is just a stunt. We all know that electric motors make tons of torque - that's why they use them in...uh...trains. The rest of the "prototype" could built any way they need to to roll a train. You could probably do it with any HD truck on the road today, at least for a little bit

Will the electric F150 be a game changer? Well, it could be. The first really well developed, usable electric truck WILL be a game changer. FoMoCo is certainly in a position to be that guy, assuming they've done the work to get it right. But it could also be Rivian. Or someone else. But the bottom line is it WILL happen sometime, and I think it will be a major game changer when SOMEONE gets it right.

chadwicksavage said:
is this a game changer?
Click to expand...

We're up against a wall regarding range - we've been making electric motors a long time and the present state of efficiency on them is vanishingly close to the theoretical maximum. IE3 class motors best 95% conversion... you can't double that. Same with chemical storage we already know how the periodic table works, we are similarly close to the limit on chemical battery storage density. The only thing we could do is switch to moving electrolyte batteries so you could dump and refill fast like filling a gas tank.

So if you do happen to like doing math you can predict with reasonable confidence that a class 2 pickup truck (about the size of a F150) with best available motors towing a small trailer is going to eat in the vicinity of 500-650kWh climbing an arbitrarily difficult but real grade like Grand Junction to Georgetown, CO for example. What's that Rivian supposed to ship with, 135kWh? Does Georgetown have 3MW of additional supply capacity to charge up all the flat pickup truck batteries from people who just came up the hill?
Last edited: Jul 23, 2019

This is as gimmicky as when they towed the space shuttle with the Tundra.

Cackalak Han said:
This is as gimmicky as when they towed the space shuttle with the Tundra.
Click to expand...

Or Chevrolet pulling a 747

With enough gearing an ballast, my 16hp tractor can tow a train. Nothing to see here...

Unimogs have been towing multiple train cars since the 60's 404s.
C

For the typical Dad that needs a vehicle that can economically do local errands, kid schlepping etc then also as pointed out get loaded up for a back country trip. The modern plugin hybrid with batteries stashed under the floor offers an interesting option. You get local EV trips, lots of torque on long trips/off road and sizable mileage improvements.
Full EV is more of a fleet thing on a fixed typical daily range/route etc.