I'm new to the whole concept of expeditions and expo trailers, but I've got an idea brewing in my mind and I can't get rid of it.

I've just completed a rework of an 89 Ford Bronco, and think a matching F-150 bed turned into a trailer would make a great support/tow behind for camping and light off-roading.

I haven't seen anybody here work with a full size pickup before, and it leads me to believe that there is a problem doing this - perhaps weight or ???

I haven't seen anybody here work with a full size pickup before, and it leads me to believe that there is a problem doing this - perhaps weight or ???

I do not think there is a problem, take a look at this!

Actually I have been thinking of doing it with my blazer. I think a flippac mounted on the trailer would be a sweet setup.

I made a pickup bed trailer once. Stole the idea from another trailer I'd seen.

Found a 77 F150 that was being parted out. Told the guy I'd take the frame, rear suspension and axle, and the bed and rear bumper. I torched off all the brackets I didn't need, notched the rails ahead of the bed and bent the two ends in till they met and welded a hitch on it. Instant trailer.

I put a shell on the bed so it more or less matched the Bronco. Luckily the Bronco was white, so it was pretty easy to paint the trailer and shell to match.

The thing was strong, but HEAVY. I drug it along behind a basically stock Bronco that had a 28 spline 9" so it was nice to have a spare 3rd member and axles. I had stripped the splines of several axles on another Bronco that I built up with a 460, so I was paranoid about that. Never needed the spares with the stock Bronco though. I also had a set of spare driveshafts for the Bronco mounted to the frame rails, which I also never needed. Another nice thing is to have matching wheels and tires, so that in a pinch you can steal a spare off the trailer. I never had to do that either.

It was fun for a while, but have I mentioned it was HEAVY? A pickup bed is quite a lot of sheet metal. And using a truck frame...that's just nuts. I would have been far better off building something lighter.

But it was cheap, and it only took a couple hours to make it into a towable trailer. Never did get the brakes working either...

The trailer that a friend & I built isn't THAT heavy. It's no lightweight, but it can be moved by picking up the tongue and walking it around. I call it the "CUT", Cheep Utility Trailer. Do yourself a favor and dump the rear axle. It is weight and rolling resistance that does nothing for you. We cut the ends off of an old full-float pick-up rear axle and shoved them into a large ID, thin walled tube and welded it all together. The drive axles had the flanges cut off so they are now just caps. There is about 2-2.5 gallons of 90wt in the axle to lubricate the bearings.

Here it is loaded down with my grandfather's tools. I towed it from SoCA to Central Oregon and back. Mileage dropped maybe 1-2 unloaded and 2-3 loaded. At the worst I was still above 10, and the Sub was loaded down as well.

A friend of mine has a pretty cool setup. I have a similar idea for my Toyota. The main difference from my plan is to just use the bed and fab my own light wieght frame and use a trailer axle. This will get rid of the heavy truck frame and axle.

partsflyin said:
A friend of mine has a pretty cool setup.
Click to expand...

That is sweet. I really love those 78/79s. Far as I'm concerned, those were the best looking Broncos.

matt s said:
Actually I have been thinking of doing it with my blazer. I think a flippac mounted on the trailer would be a sweet setup.
Click to expand...

I would LOVE that. I almost did it, but the lack of water proof-ness without a rain cover killed it for me, though not by much. Still might go back to it one day.

Basically just use the side and front sheet metal, everthing else would be custom. No need for the heavy inner walls that waste space that could go towards storage, or the heavy floor metal that could be relpaced with Alum or light guage metal/wood.

I've always kicked around this same idea in my head

In our travels, here are a few I've run across It aint pretty, but it'll keep you off the ground. Seen on the side of the road in New Mexico This would be ideal to throw on a Frame as it's a pre-made RV basically. Seen on the side of the road in Baja 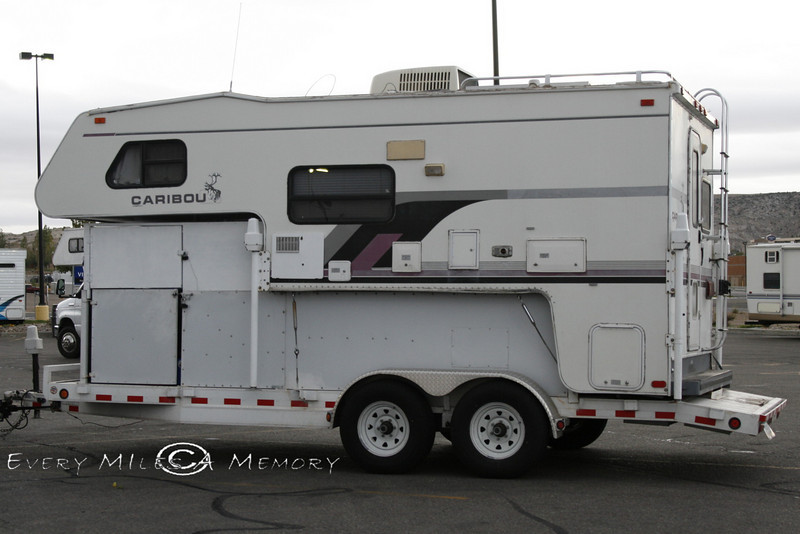 Too big for serious Off-Road exploration, but it reminded me of a much lesser version of Doug Hackneys Global Expedition Vehicle. The double doors under the sleeper section held two motorcycles just like Doug's does. Seen in a Wal-Mart Parking lot in Wyoming

And just for laughs, this could serve two purposes. You could build it on a trailer frame that would give you good grond clearance, but still allow you to back into a Boat Ramp and use it on the water....******** partsflyin said:
A friend of mine has a pretty cool setup.

This is almost exactly what I was thinking. Instead of the topper, I was thinking of some sort of dirt bike carrier and a RTT or perhaps a way to raise the cover and sleep under it. AWESOME! Thanks
L

Years ago I contemplated building a rig similar to the above.
We had a Ramcharger and I was in the process of hunting down a Dodge short box but job and location changes threw a wrench in the works.

I would have used a short box and built my own frame though.

Forgot to post this one, taken during the 2009 Vegas to Reno BitD race. The white OJB towed it. That tongue was more than a little scary, but I liked the idea.