Fuel on roof. Fore or aft?

I am so re-enamored these last few years of having my spare in OEM under bed location with proper rear hatch access I can't imagine on a swing like I used to have. Anyway, and as such, no spare fuel underneath for me

I've put both my RotoPax and my Wavian & Wedco inside without issue. You just need to make sure ahead of time that they don't leak fumes.

I've had to replace most of the gaskets on my Wedco's and Wavians because they break down over time and use.

I put them towards the rear since it's much easier to climb on the tailgate and lift them up from there. They sit on their backs (the narrow side opposite the opening is down) in a bracket that I made for them and then I use a couple of ratchet straps on them; never had a problem. If I'm only carrying one can I may stick it in the back and lash it in place. As others have said, empty it when you can to get the weight lower. I've never had any leaks with the NATO cans but I do check the gaskets before trips.
W

Interesting topic, and any weight in the "wrong" location can still work, but generally not as efficiently. I would also never travel with gas cans, full or empty, in my cabin unless it was a question of survival--YMMV.

Gas weighs 6lbs, diesel 7lbs, water 8.3 lbs a gallon+ weight of can (obviously). 5 x 5 gallon cans can then easily weigh near 200 pounds so placement could get interesting, unless you literally put a few up top, a few on the bumper, etc.
I think if you get into the mix on some trails, 200 pounds several feet above the center of gravity WILL be felt, and 200 pounds of fuel on a/hatch tire carrier with a tire out past the rear axle.

If you need to carry that much fuel, and while some only think of their personal range, you may have someone in your group who could suddenly use a few gallons, or you're the designated camel due to their individual setups. The times I have carried a LOT of stored fuel was during major hurricanes, where fuel was scarce to non-existent--and I had a very thirsty truck. This was secured inside the bed of a pickup truck with a locking cover though.

What are the on-road legalities for having fuel attached/outside of the vehicle? I believe they need to be red colored, or have enough red tape or stickers on them designate the cans are fuel?

WRONG_WAY_DAVE said:
What are the on-road legalities for having fuel attached/outside of the vehicle? I believe they need to be red colored, or have enough red tape or stickers on them designate the cans are fuel?
Click to expand...

I don't think that there are universal rules for fuel can colours, however in Australia, for example, petrol cans are supposed to be red and diesel cans yellow. I know that in some countries carrying fuel in cans inside a vehicle is illegal. More to the point, legal or not, it's unsafe. Carrying fuel outside (on the roof rack for example) is usually legal, however the cans must be secured safely.
N

I say put it up front so you can see it leak down the windshield!

I’ve carried wavian cans inside. And outside... no issues.

The concept of “safe” or “unsafe” is just that ... a concept. It’s all about risk, and risk is in the eye of the beholder.

Some jurisdictions may attach liability to that risk, and you have to occasionally consider the risk you force on others without their knowledge, but it is a moving target, there is no absolute answer.

Good news is that where we would employ cans is generally not exactly a patrolled area. Like at all. But inside safety and leakage is a bit concerned of mine.
W

pskhaat said:
Good news is that where we would employ cans is generally not exactly a patrolled area. Like at all. But inside safety and leakage is a bit concerned of mine.
Click to expand...

And the smell. I have cans that have been empty and aired out for years, and they still smell. Don't want my interior to hang onto the stank. But as set, YMMV--

NatersXJ6 said:
The concept of “safe” or “unsafe” is just that ... a concept. It’s all about risk, and risk is in the eye of the beholder.

Some jurisdictions may attach liability to that risk, and you have to occasionally consider the risk you force on others without their knowledge, but it is a moving target, there is no absolute answer.
Click to expand...

I take your point, and why you say this, however the hazard is definitive, it's the assessment of probability and consequences which is somewhat subjective.
N

alanymarce said:
I take your point, and why you say this, however the hazard is definitive, it's the assessment of probability and consequences which is somewhat subjective.
Click to expand...

If the hazard is definitive, what is the hazard? Do you consider a leak to be the hazard? Is there a threshold at which it becomes a hazard? Who defines it? The consequence can of a leak can vary widely, and the probability of a leak is uncertain at best.

I think my point is that many people, both on this forum and in life in general, make strongly declarative statements about what must be done (or never done), but reality is evaluated on a sliding scale.

I agree absolutely that risk is a sliding scale (or a matrix, to simplify things). I think we are in agreement here.

A hazard is a condition or action with the potential to do harm. A leak is an incident. As you note, the consequence of a (leak) incident can vary and we should consider the "worst reasonable case" as our concern. Also I agree that the probability is uncertain, and that's why we use our judgement to assess this. At the end of the day we end up with a characterisation somewhere between "insignificant" to "catastrophic" and seek to bring the perceived risk down to ALARP or at least "acceptable".

As you say, it's not helpful to make blanket unsupported declarations.

So, to clarify my statement that carrying fuel inside a vehicle is "unsafe", I'll quote the following Globe & Mail article in which this is discussed, with quotes from Calgary Fire Department and the Canada Safety Council:

""It's not safe. It's not recommended," said Carol Henke, spokeswoman for the Calgary Fire Department. If the lid is not tight or if there's any leak, the fumes can escape and when they reach a certain concentration any spark or heat source can cause them to ignite. And even if the fumes don't find a spark – from wiring or static electricity – you shouldn't be breathing them in. "The fumes and vapours can make a driver light-headed and nauseous," Lewis Smith, manager, national projects with the Canada Safety Council, said in an e-mail. "[... cans] should always be stored in well-ventilated areas, which rules out the passenger cabin of vehicles for obvious reasons." Just as there are still warnings on gas pumps that static could cause an explosion, there's a long list of warnings on the sides of new [...] cans, including "keep out of reach of children and direct sunlight," "store in a well ventilated area" and "do not store in home or vehicle."

The Canada Safety Council doesn't recommend keeping gas inside your vehicle. So what's left? "Securing a [... can] to a roof rack is also a possibility, but given the relative weight of the fuel it's important not to overload the vehicle and throw off its centre of gravity," Smith said. "The roof-rack solution also comes with the added concern of a loose can flying off at highway speeds – obviously less than ideal." If you have a truck, you can safely keep a gas container in the bed of the pickup. And, if you have an SUV, you can get a metal [...] can mount installed on the back of your vehicle."

I don't think that outside storage is a significant risk, although obviously in a crash there exists the possibility of damage to a fuel can, with consequent loss of containment, and if there is either a spark or a flame this would be a concern (although I suspect that at this level of damage we would have other things to worry about.

We carry fuel in cans occasionally and we're not concerned about it, although I have to say that the way I did this many years ago was probably less safe than the way we do it now. I had a metal can mount (well made) which mounted to the back of the rear spare wheel mount (on a Nissan Patrol) - in the event of a rear end collision this would have resulted in diesel all over the place, which could have been bad news. We now use cans secured into an area of the roof rack with a crossbar and side bars, and this is probably a lot better, albeit a little less convenient.

Wavian cans from 1 small one in the bed of my truck to 4 large on a cap mounted basket in there respective can holders..... and even on there sides straped down. Never have had any problem with leakage even in the heat of summer. I sleep in my cap and would know if there were any leaks only have the 1 small one in there now. Cheers!

Not possible for every build, but if possible, I suggest an "aux" tank instead of fuel cans of any kind.

When I built the bed for our new truck, I mounted an aux tank (18 gallons) under the deck, between the wheel wells.
It keeps the added weight right where it should be, low and centered.

So we have two tanks, complete with separate fuel fillers. Aux tank has a tip-over valve and is tied to the OEM vapor recovery system.
There is a small transfer pump that allows me to transfer fuel from aux to main, as well as use it as a fuel station, with the ability to fuel the generator or motorcycle, etc, from the aux tank 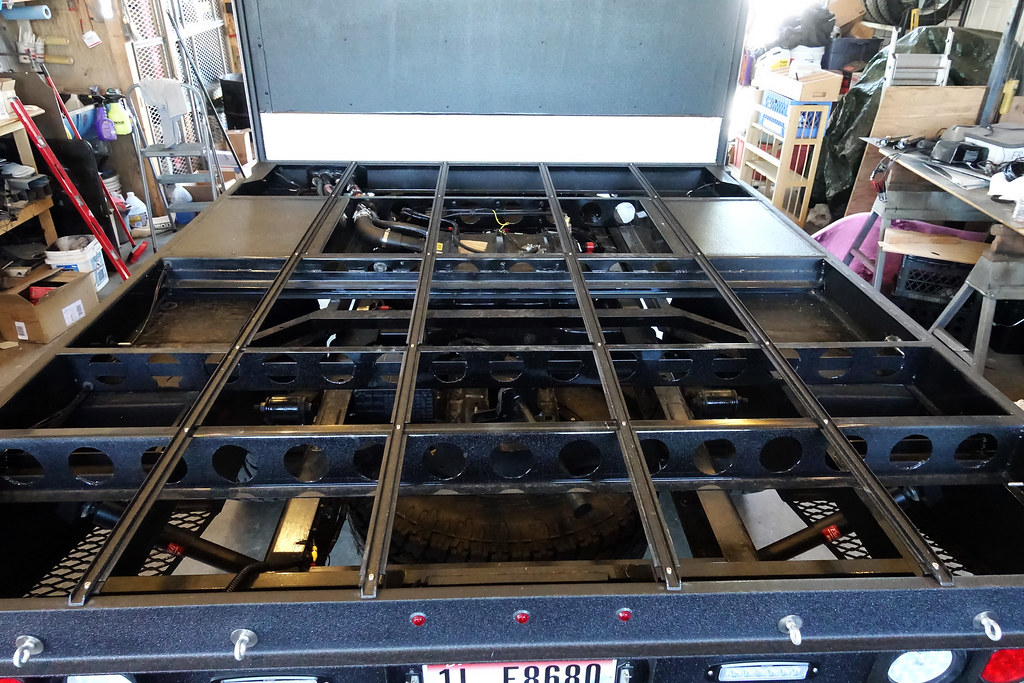 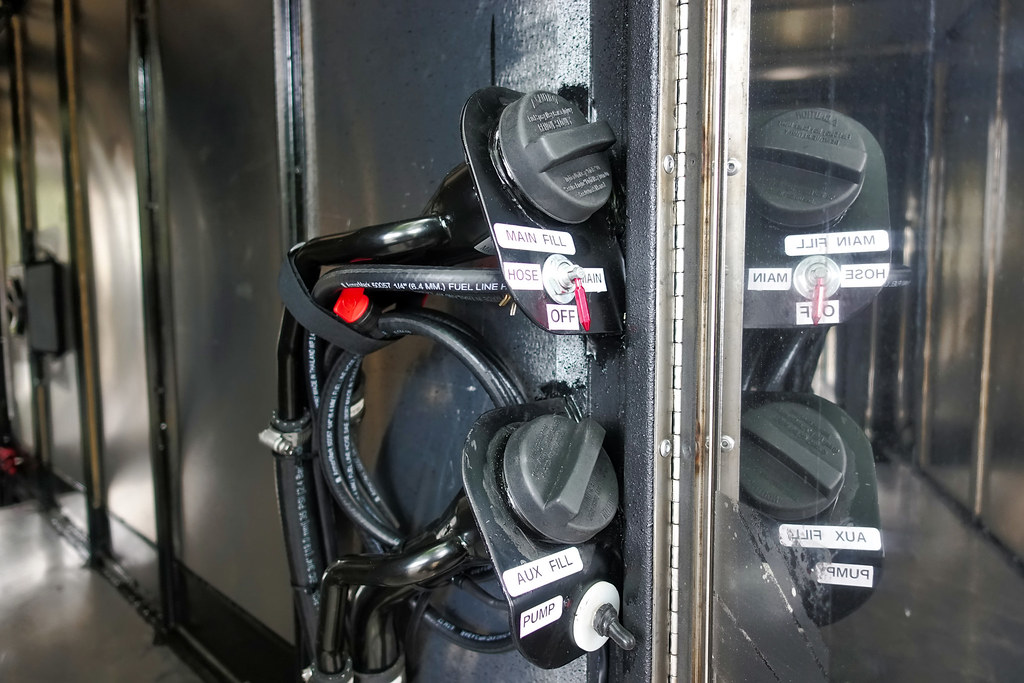 Cool piece of kit Ida, but fairly impractical for most folks looking to just add some range to their vehicles. TruFlo has several oversized tank options, but not for everyone and every vehicle. YMMV

Biggest issue with aftermarket oversized tanks is clearance.
At least on Superduty trucks, you loose 2-3 inches of belly clearance at the tank.

Second issue is cost. I have a fraction of the cost of a Truflow into this setup.
Less than $250 as I recall.