"You're going on a trip through northern Maine with a bunch of people you met on the internet?"

I have to admit I was a bit worried after seeing last years' snowy trip report that this years' 1-week delay could mean exceptionally challenging driving and camping. After Pittston Farm got a 5" blanket of snow in October, a warm November dashed plans of a white DRAM3. A mixed blessing for sure, as the scenery and trails would both benefit and take a hit.

My DRAM adventure started when Spencer invited me along and also sent me back to the drawing board after I posted up pics of an off-the-shelf cargo carrier I hoped to use for surplus fuel storage. "An extreme liability" as it was referred to, so I got to work on improving it. I wanted to take 10 extra gallons of 87 along for the ride to bolster the 22.5 gallons already on board. My biggest fear, aside from catastrophic mechanical failures, crashing, or being eaten by the Yeti, was running out of fuel.

Six weeks later and DRAM3 0-day was upon us. I loaded up and headed North Thursday morning for my 230 mile ride to the lat/lon coordinates for the meeting spot. Weather for the weekend was looking hit or miss, but that's one thing I've learned camping in northern New Hampshire, is that you can count on the weather report being good for laugh and not much else. It was a windswept washout going through Franconia Notch, and the normally scenic views were replaced with a low grey ceiling of clouds.

Save for a brief glimpse of sunrise on Day 1, we wouldn't see the sun again until the morning of Day 3. Try as it might, the foul weather was no match for the anticipation of the marathon effort that would take place over the next few days. 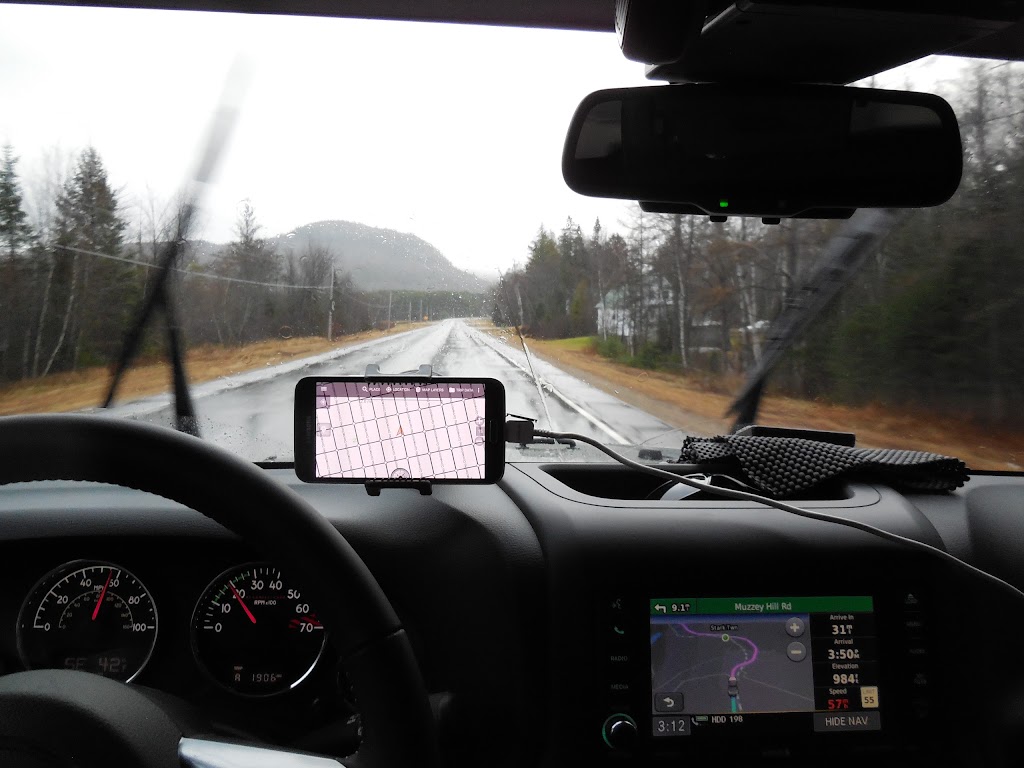 Me Too! :campfire:
B

one trail at a time

This report cant come soon enough. Cant wait to read about it.
E

Stuck in the Mud

Elyse & Ashwin (Ashwin's behind the camera for this shot), shared the driving of a keurig-equipped 4-runner, with their pup Butterscotch along for the ride

Ralph, our designated photographer and his severed-arm equipped Jeep TJ

Jonathan and Steve with a UN-approved white 80-series

And last and certainly least...er tallest, Me, with the appropriately over-height Jeep JK.

I'm pretty sure there was another guy who tagged along... was it Paul? Mike? oh yea... returning DRAM veteran Will, who piloted his super capable Xterra:

My first mistake revealed itself late Thursday en route to the off-grid meeting spot. You can see it cropping up in the first post as a blank grid on my screen where a map should be. Perhaps if I had enabled airplane mode before I hit the road, I would've noticed the distinct lack of cached topographic tiles in my nav app. I made it to the meeting spot thanks in large part to Spencer's attention to detail in the driver's packet and a small delay to go find a Gazetteer.

Aside from the rain, mud, wind, and cold, it was a great November night in Maine.

Steve and Jonathan got a fire going right off the bat with some dry kindling. Combined with their ez-up and the smell of Jonathan's gourmet cooking, the back of Steve's Landcruiser quickly became the nucleus of the group. 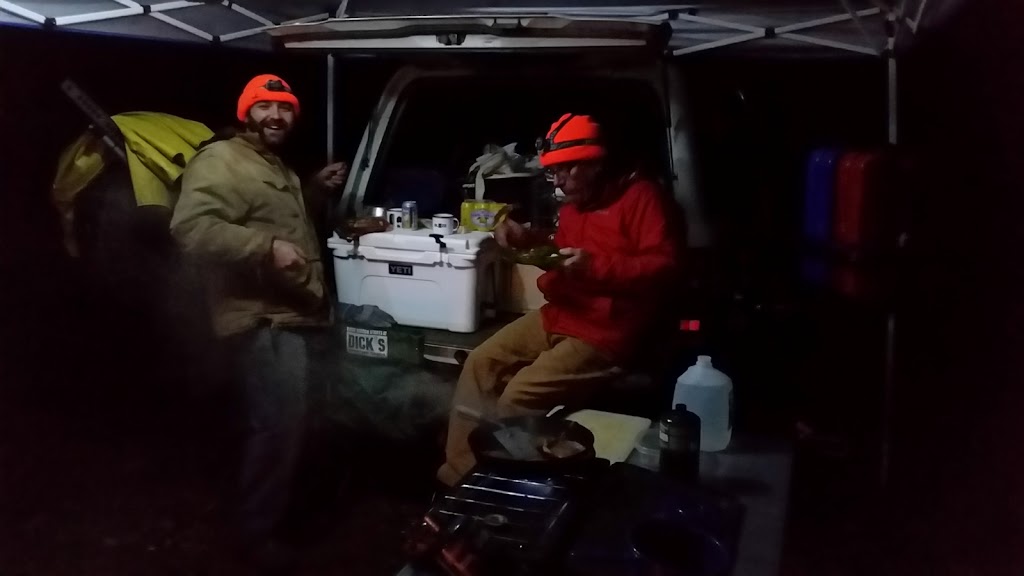 One by one the team arrived, made their introductions, and got to work on dinner and accommodations. By the time I turned in, we were only missing 2 trucks. First light Friday revealed the full roster had made it. 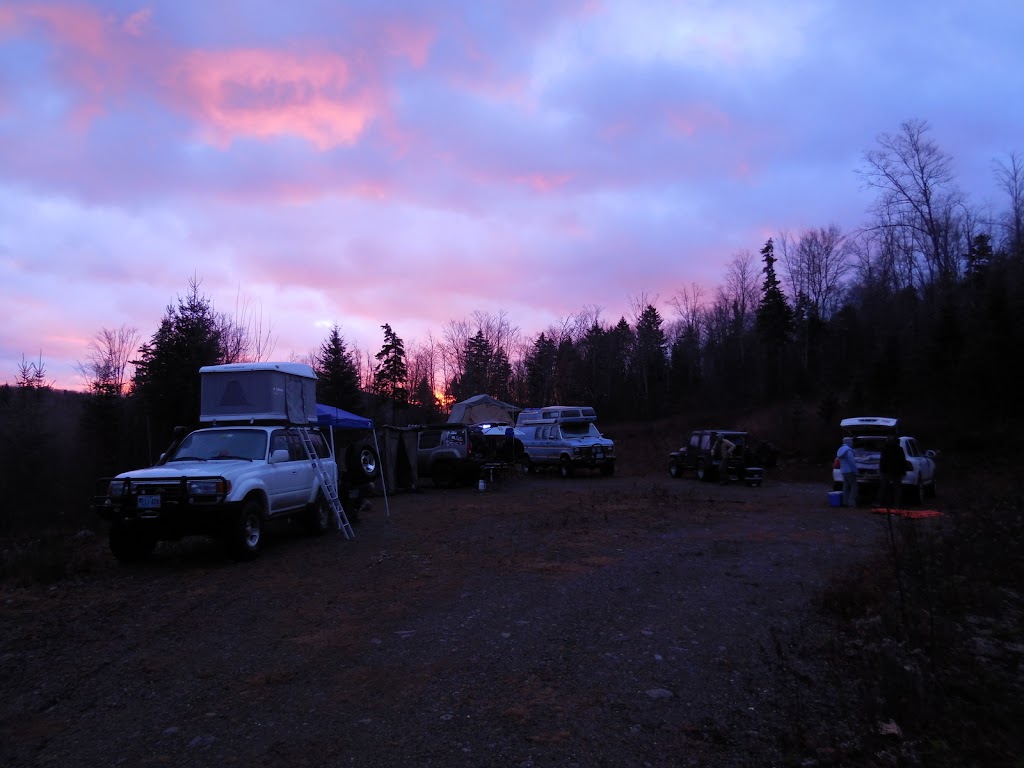 10 people in 7 rigs would attempt the journey to Lubec, broken down into 12 segments over 3 days. The forthcoming 500+ miles would include a minor fuel catastrophe, washboards that could remove fillings, active logging operations, paint-stripping foliage, beaver dams, and worst of all, beaver jokes.

one trail at a time

Visibility when running this route during hunting season is....well....critical. There were numerous instances over the course of the trip where active hunting / firearm usage was within close earshot and none of us, Butterscotch included, felt the need to be mistaken for sporting game.

Wicked, as we say here in Maine. Can't wait to read more.

It's always fun
breaking down soaking wet gear and packing it all up in your previously dry truck. At least that's what we tell Spence after he climbs out of his climate-controlled paradise affectionately known as Boomer.

The morning was a blur after crawling out of the tent somewhere near 6:15, knocking out 3 scrambled eggs, and stowing everything for the inevitable blender ahead of us. 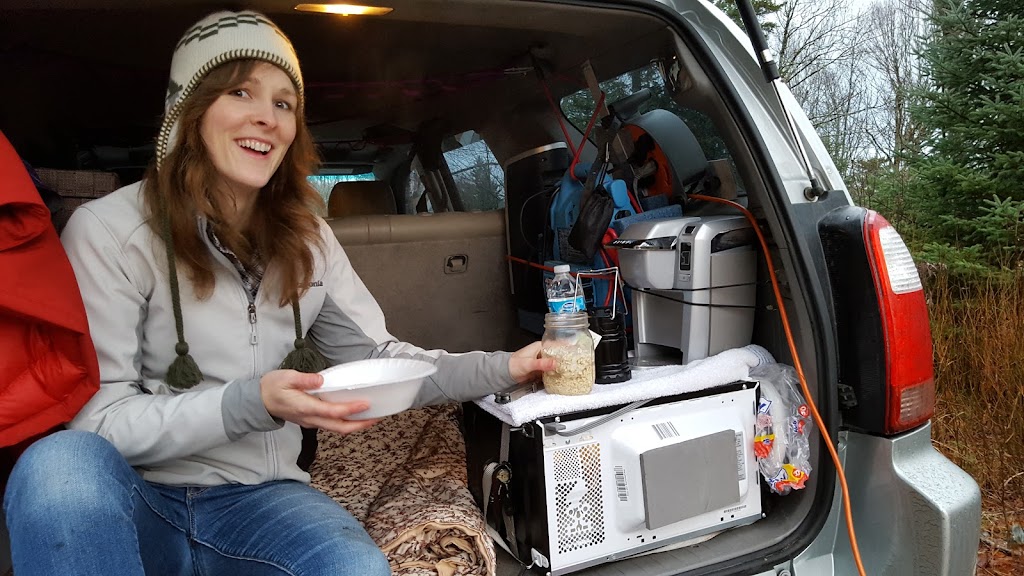 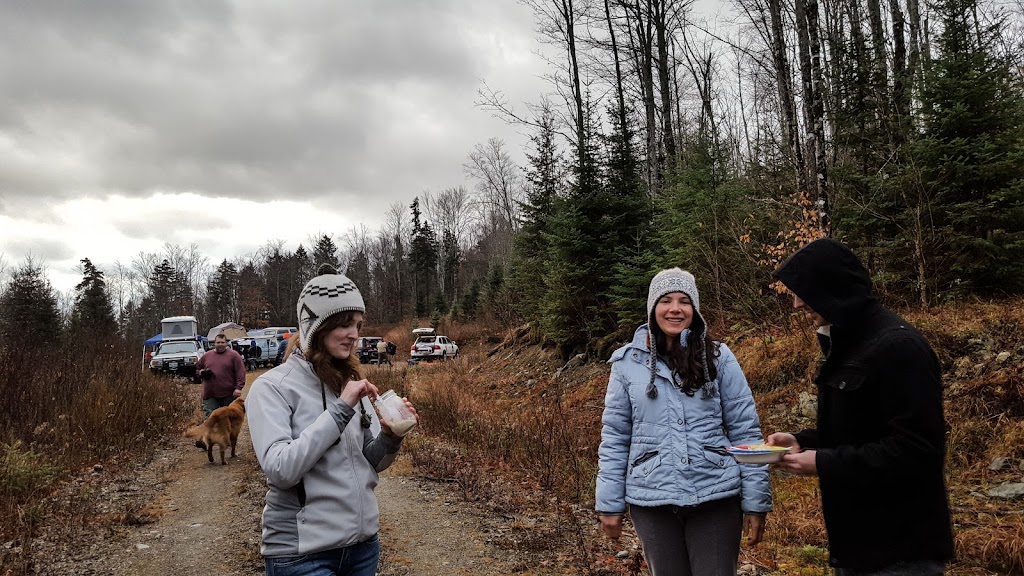 With a hot chocolate in hand and the Jeep warming up, I completed my pre-flight radio check, air down, and double-checking of the ratchet straps keeping my jerry cans out of orbit.

Clutch out, shifted into reverse, and instead of rolling out, Spencer quips something over the radio, hops out, and pops the hood on boomer. Uh-oh. 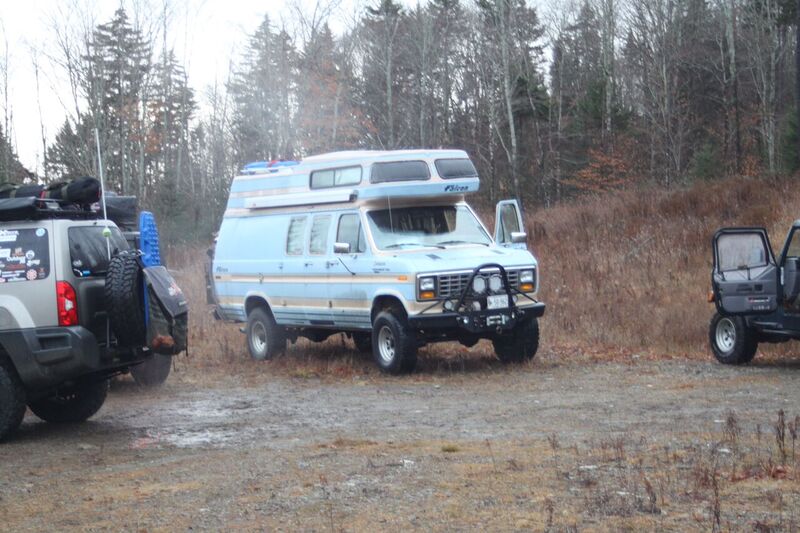 After getting a whiff of coolant, some detective work with a flashlight revealed a dripping upper radiator hose. The options were weighed, and the decision was made to continue as planned until the first fuel stop or catastrophic failure, whichever came first. What could go wrong?

With a slam of the hood, we hit the road for leg 1. 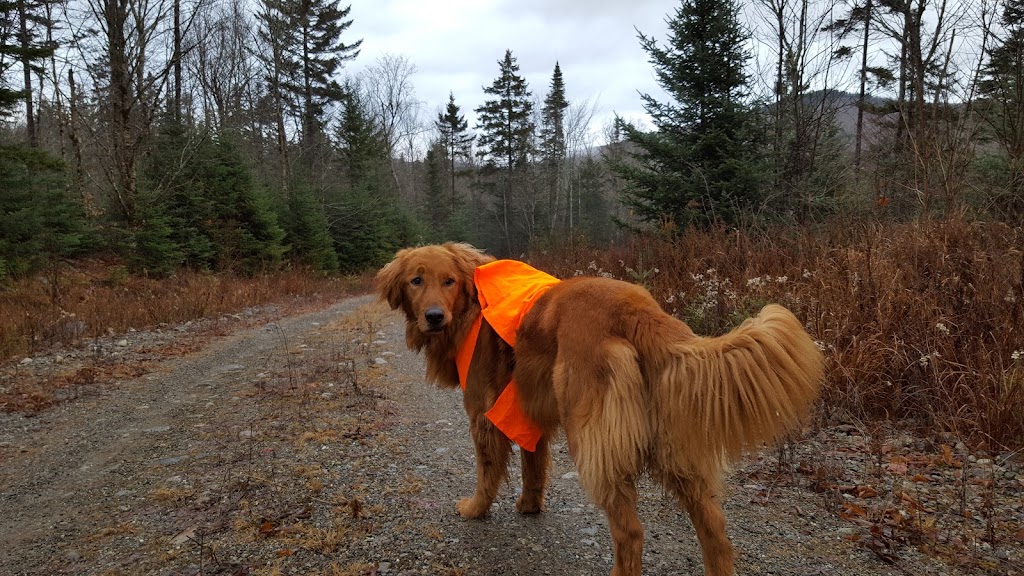 After clearing a couple of dormant logging operations, we came across our first active traffic jam. With some time and patience we cleared as expected without incident. 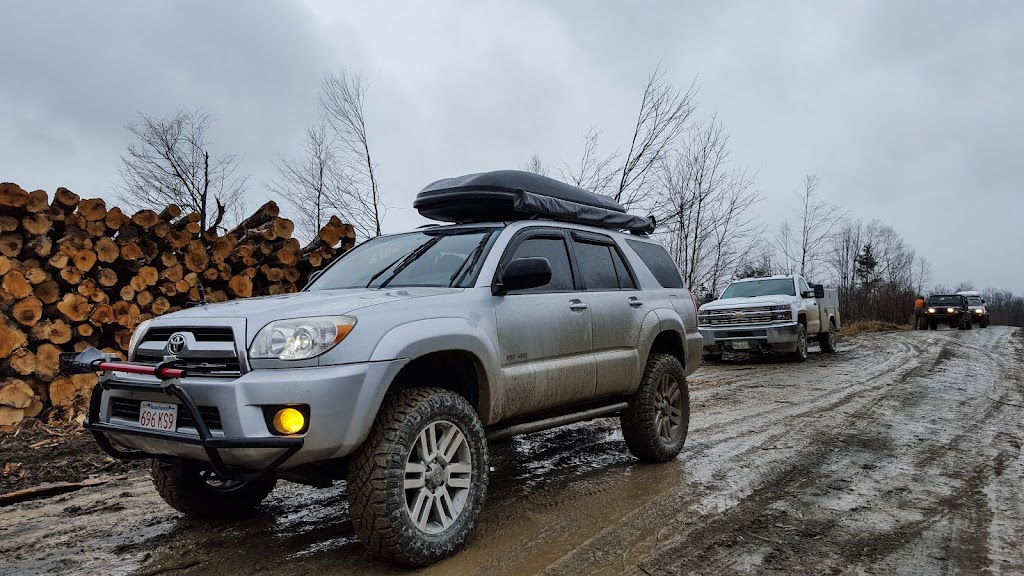 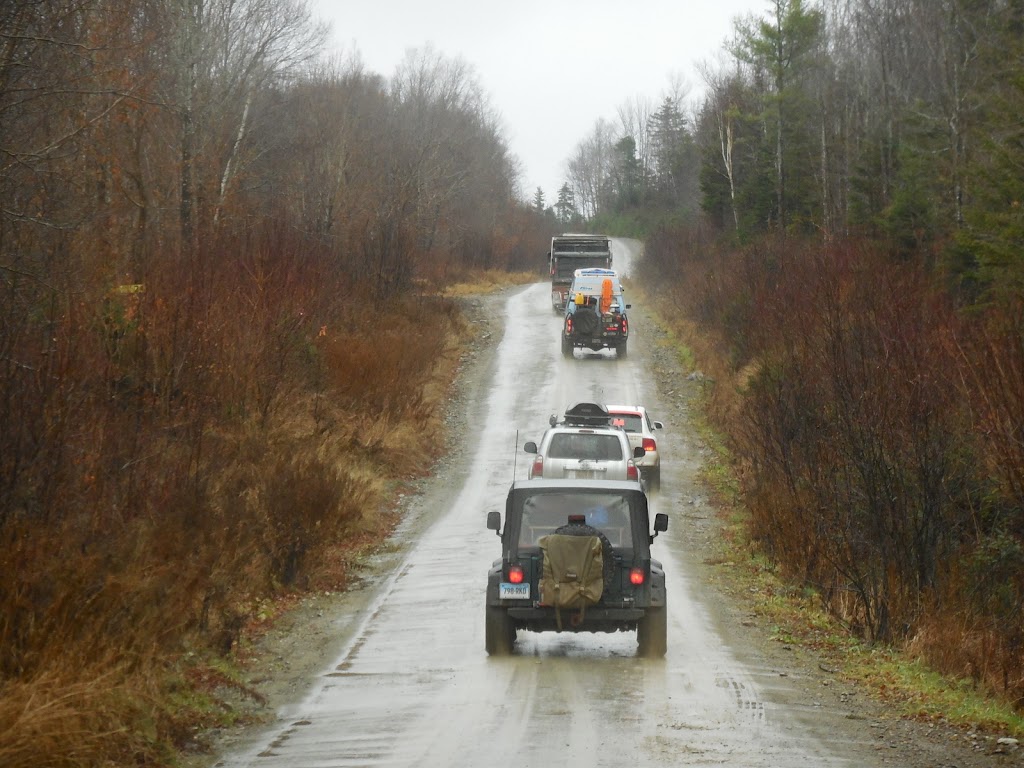 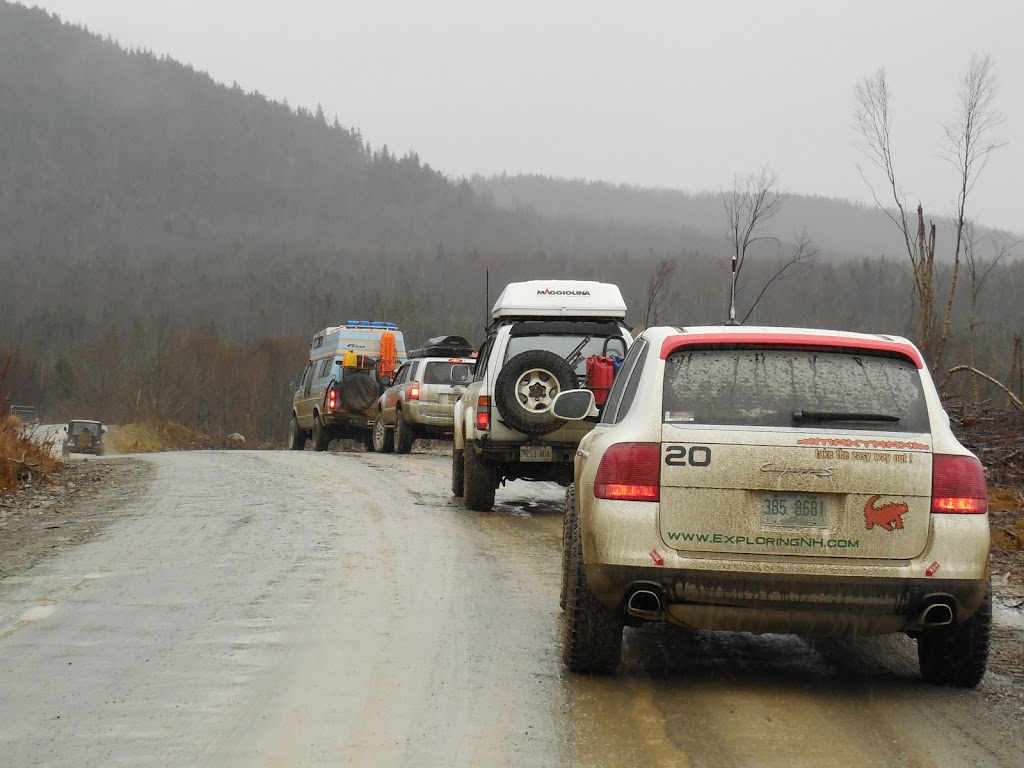 Just before lunch, we landed at one of the scheduled fuel stops. This location had a little of everything, from leaded race fuel, to beautiful views, to 3G cell service. That 3G service would come in especially handy when it became necessary to google "what should I do if I accidentally put 7 gallons of kerosene in my gas tank?"