Does it Exist? Newer AWD Tall-Wagon Van Thing You can Sleep In

I forgot about the delica. There's a few around here in Halifax and they are all lifted lol. They look cool.
P

The XL-7 is an interesting option. Gets better MPG than the Montero and actually a little bit longer. Probably easier to find one cheap than a Subaru with similar fuel efficiency.

I really like the skylight roof in the Delica - but for most people the requirement for driving a RHD vehicle is a show stopper. They also are not that big inside - an Astro/Safari van is larger.
I

PHeller said:
the Metris while available in AWD overseas hasn't even hit our shores yet in FWD.

The AstroSafari is pretty much spot on, but working on one is not like working on a Subaru Outback.
Click to expand...

Honestly, Astros are pretty easy to work on. Removing the engine cover and or fan shroud and fan will grant access to most everything you'll need to work on, and the spark plugs are changed through the wheel wells. Lifts kits for Astros are under $700 for up to 7" and a Blazer Hi-Lo transfer case (2, 4 Auto, 4 Hi, N, 4Lo) can be swapped in fairly easily.

How 'bout an All-Trac Previa? Or AWD Sienna/Chrysler? The minivans seem to really trump any of the utes in terms of interior volume.

I hope you don’t mind me resurrecting this old thread as my first post, but the question posed by the OP (PHeller) is exactly where I’m at (found it Googling), and wondering if there are any options that have appeared in the last five years.

I presently have a 4L 2002 Ford Ranger (with canopy) which I bought new, and it just doesn’t quite work for sleeping in the back for those little solo trips away from home, so I've looked at other options and there just doesn’t seem to be anything that quite fits the bill.

I first learned of the VW Eurovans, but then discovered their cult following, and obscene prices. Same with the older VW Westfalias, it’s insane what people want for those old, worn out sleds, and don’t even get me started on the VW Syncros! LOL

I then found out about the various camper vans that are brought in from Japan (Delicas / Honda Stepvan etc), but the RHD is a deal-breaker for me.

I then turned my sights to newer options like the Transit Connect, Promaster City and Nissan NV200, and while their fuel efficient engines and other modern perks are very appealing, their ground clearance just isn’t enough (~5”), and of course they’re very expensive if bought new. (The larger vans like the Sprinters, Transits, et al are too large for me).

I then became aware of the older Astro/Safari AWD vans, and……..the lift kits available for them! Cool! I got all excited about that, and then test-drove a 2001 Astro the other day. It had a professionally made extended roof and a metal wheelchair lift just inside the back doors (which could easily be removed and sold), but when I drove it, it felt like a big, heavy, lumbering hulk. I was shocked, because these are relatively small vans, so I chalked it up to the added weight of the large roof.

Then, yesterday, I test drove a 2001 Astro AWD passenger van (with rear seats removed), and to my dismay, it had the same, lumbering feeling to drive…..more like a boat than a small van, and this one had recent new front shocks! Horrible. When I got back into my Ranger, the difference was massive – it felt like a sports car by comparison; tight, light and responsive. So it appears that is simply what the ride characteristics of the Astro/Safari are like, and I came home dejected, feeling like I just couldn’t live with that, as this would also be my daily driver.

So I guess my question is two-fold: Is there anything that has been released in the last 5 years that fits the bill, or would a different tire & shock choice really help the ride of the Astro/Safari? BTW, if I do buy one, I plan on doing a 2” lift, with larger tires on the 16” rims.

I’m going to see another 2005 Safari AWD cargo tomorrow morning, so would LOVE to hear some feedback before then if possible, which would help me decide on buying or not.

I had one of these 40 years ago. Incredibly capable, indestructible, light, tons of options to build a sleeper, kitchen etc.

@Star Stuff It depends on your desired use. If looking for AWD with a bit of ground clearance to handle winter weather and maintained forest service roads, a Toyota Sienna may be for you. There is a 3.5" lift kit available for 2004-2020 models. Obviously not for off-roading but they are awesome on pavement, will do just fine soft-roading, very reliable and enough room to sleep two inside and carry your gear. 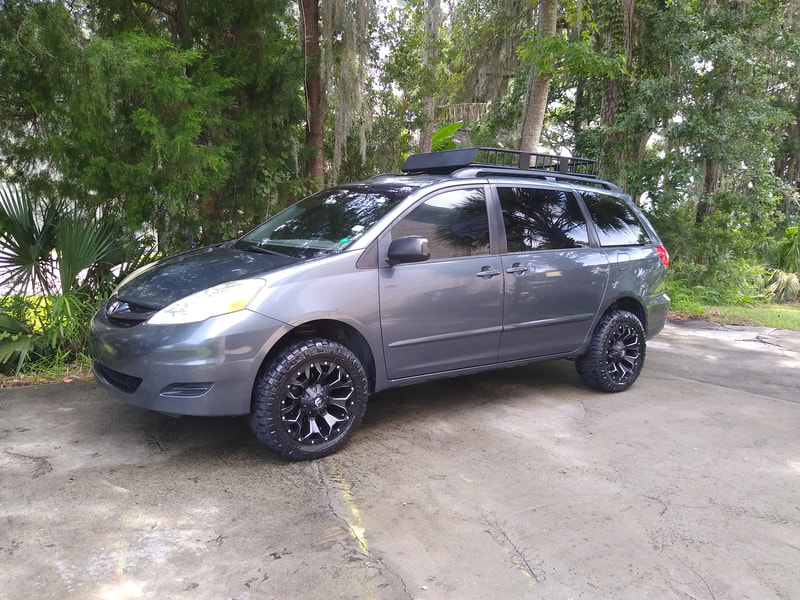 We carry an assortment of Lift Kits for the Toyota Sienna. We are currently working on a full size roof rack that is installed into the factory mounts. Fits in one box that can be shipped to anywhere...
www.journeysoffroad.com

Florida Native said:
@Star Stuff It depends on your desired use. If looking for AWD with a bit of ground clearance to handle winter weather and maintained forest service roads, a Toyota Sienna may be for you. There is a 3.5" lift kit available for 2004-2020 models. Obviously not for off-roading but they are awesome on pavement, will do just fine soft-roading, very reliable and enough room to sleep two inside and carry your gear.
Click to expand...

Thanks. I forgot to mention that I also need to accommodate a 10' plastic kayak, and really prefer the ability to have it in the back rather than on roof racks, as it usually is dripping with salt water after use. I will be putting rubber gym mat inside.

Where do you find an astro that doesn't have half a million clicks on it?
Also the old vortec is heavy on gas.

The shortest standard roof Transit (130" wheelbase) is reasonably sized. Going to be very expensive in AWD.

The Toyota Sienna doesn't have a spare tire because the AWD drivetrain goes through where the factory spare normally sits I thought.

Grassland said:
Where do you find an astro that doesn't have half a million clicks on it?
Also the old vortec is heavy on gas.
Click to expand...

Yes, the fuel mileage is a bummer, it will be about the same as my 4L Ranger I suppose - thirsty, but again, I can't seem to come up with any alternatives. Again, the efficient 4 cyl of the Promaster City is great, but the ground clearance is too little.