So let me preface this thread by saying that I'm not an engineer, or a carpenter, or a welder, or fabricator, and I don't have sponsers on Instagram...I'm just a guy with a Land Rover.

This build was inspired by a trip I took last year where I flew to Miami and purchased the Brokebutrichoverland Defender then drive it back to Sacramento. Awesome trip, saw a lot of cool places and it was just amazing. When I got back, I kept the Defender for awhile but ultimately decided that I didn't need two vehicles dedicated to the same purpose and that I preferred my Disco. It's every bit as capable but far more refined than the Defender so I sold my Defender. I sort of regret selling it, but honestly I just couldn't justify keeping it. Plus, nowadays I'm finding that I'm more about fishing, hiking, gold panning, camping, etc then offroading but if I have to off-road to get to where I want to go then so be it; but the off-road trail is no longer my main focus when getting outside.

Taking the trip in the defender motivated me to start working more on my Disco. I started putting more work into it's maintenance and once that was squared away I started building the interior. My first thing was the ever important rear table. Their used to be a company that made an aluminum panel for the back door but they went out of business just as I was ready to buy one so I went ahead and made my own. Bought a piece of aluminum at home Depot, traced the outline and cut it out with some metal shears. It's rough around the edges but it works. Disclaimer: nothing in this build is pretty but it all functions and that's what I care most about.

After that I made the table. Ordered a custom cutting board online and attached it to the aluminum panel with a piano hinge and some reflective cordage. I don't even know what the thing is that I used to lock it upright but it works to lock and unlock the table and I f ound it in my workshop so it cost me nothing. Excuse the ugly gold hinge but it was the only color they had at the time smh

After that I thought, "why would anybody pay $1500 for drawers when you could make your own?" and then went and built some storage cubbies. The idea was that I would have a platform to tie my cooler and my action packer down and underneath I could store random stuff. So I built it...then decided a day later that I should just build a sleeping platform. Don't have pics of the storage thing but here's a random pic of my truck: 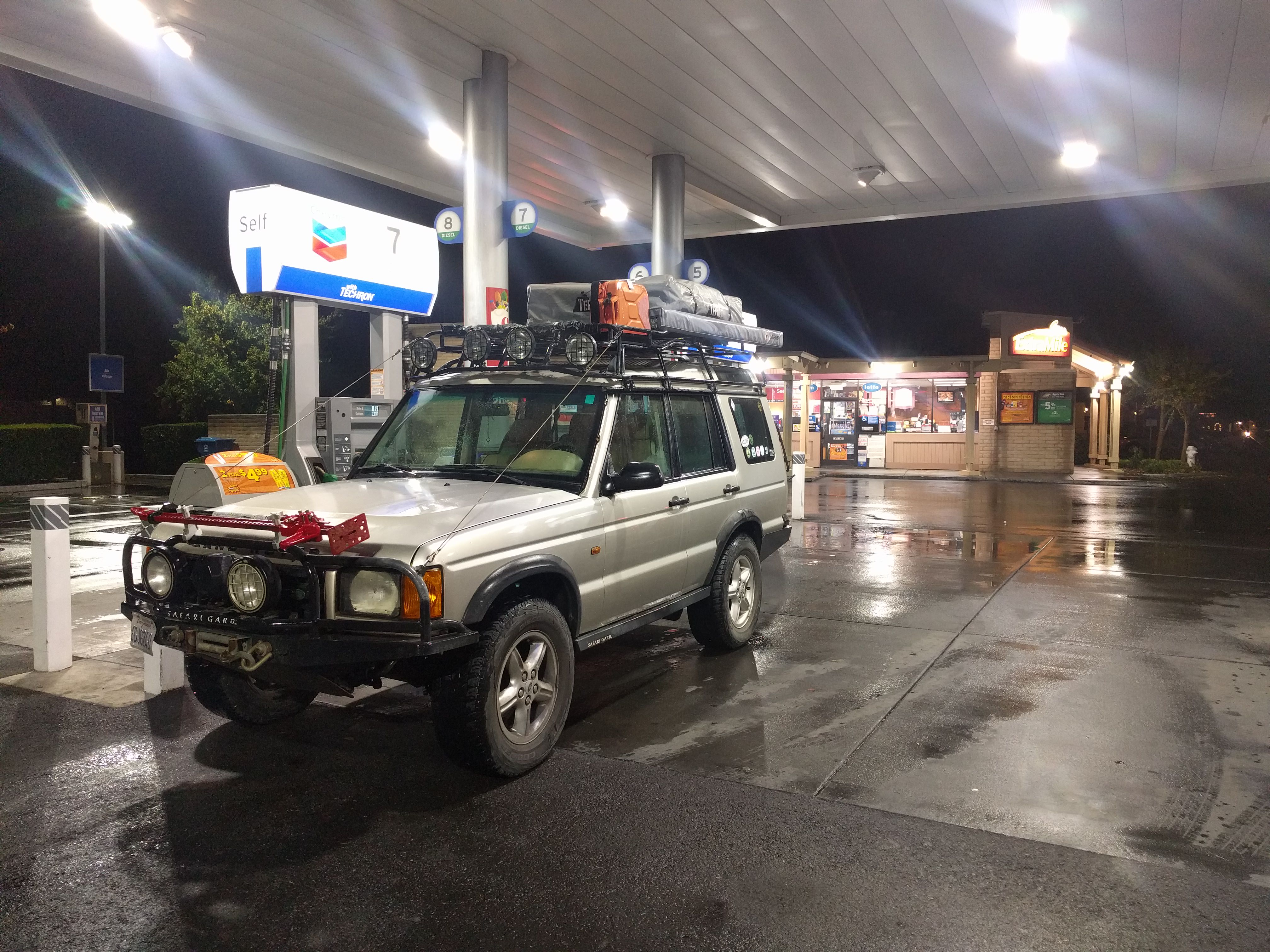 This might be considered sacrilege but I never really liked the RTT. It was kind of convenient but was also inconvenient. If I set up camp and wanted to go somewhere after it was setup I would have to pack it all up then unpack it all again once I returned. At least with a ground tent I can leave the tent pitched, leave, then come back and camp is still setup. I decided to do a sleeping platform and went to work designing one. I figured I didn't need the rear seats because I never drive anybody around but me so I took them out and built a regular platform, not one of the fancy ones that folds and contorts and slides etc to retain functionality of the rear seats. I also wanted storage so I built some flip out doors to access the storage Cubby's under the platform. 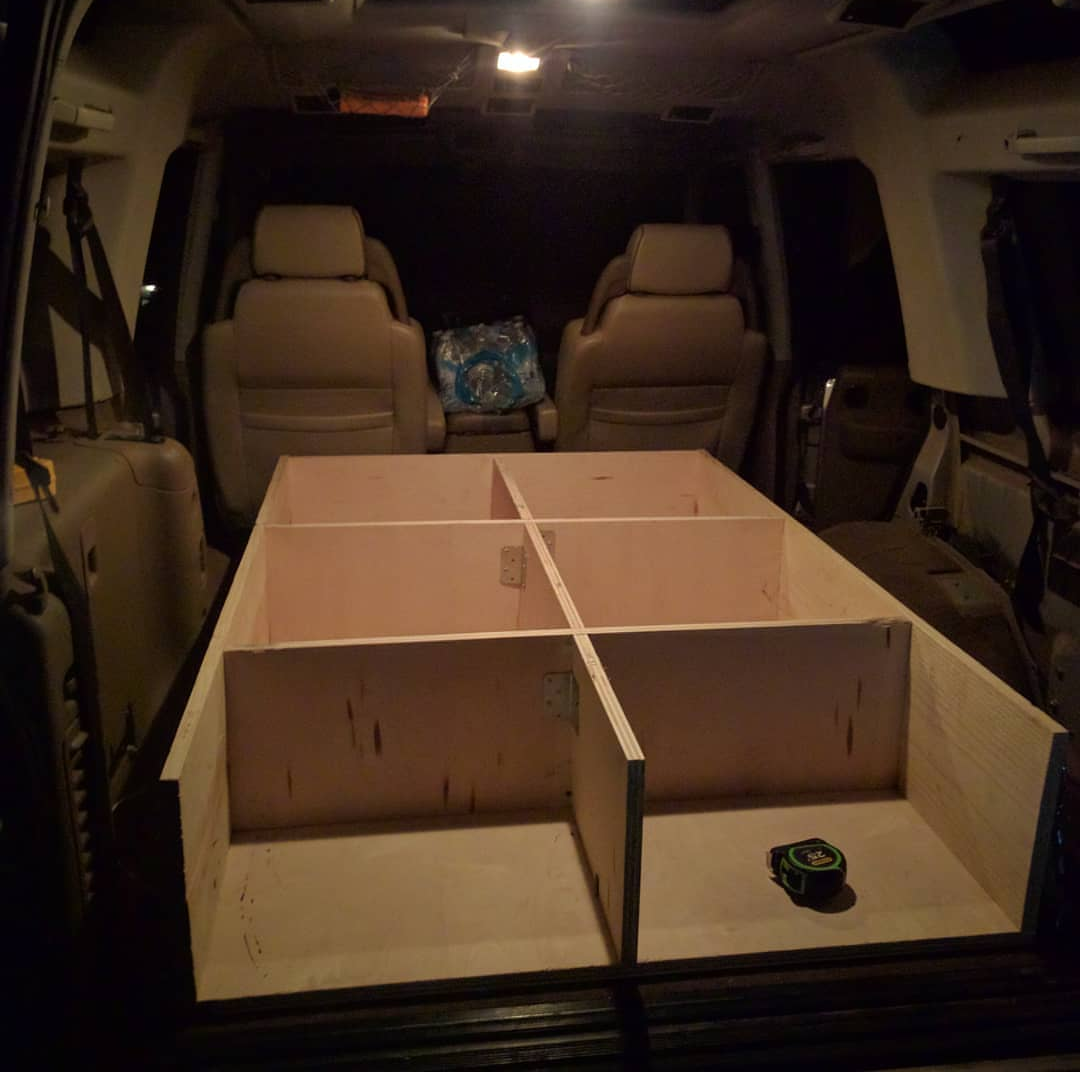 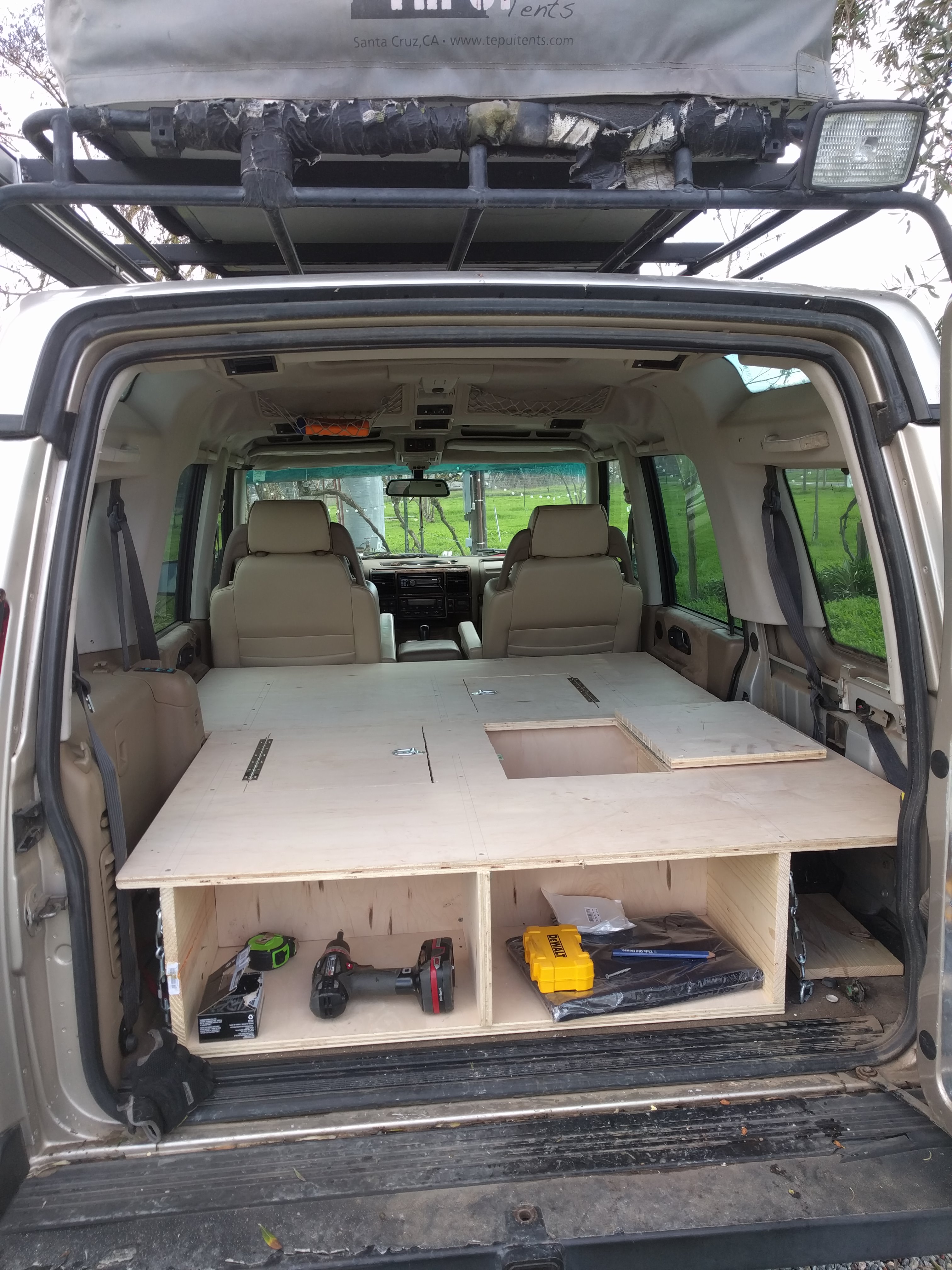 After that was done I bought a tri-fold 3 inch memory foam mattress and some other supplies. My yeti cooler (no fridge yet) is mounted to some d-ring tie down points behind the driver seat with some mounts I made myself. 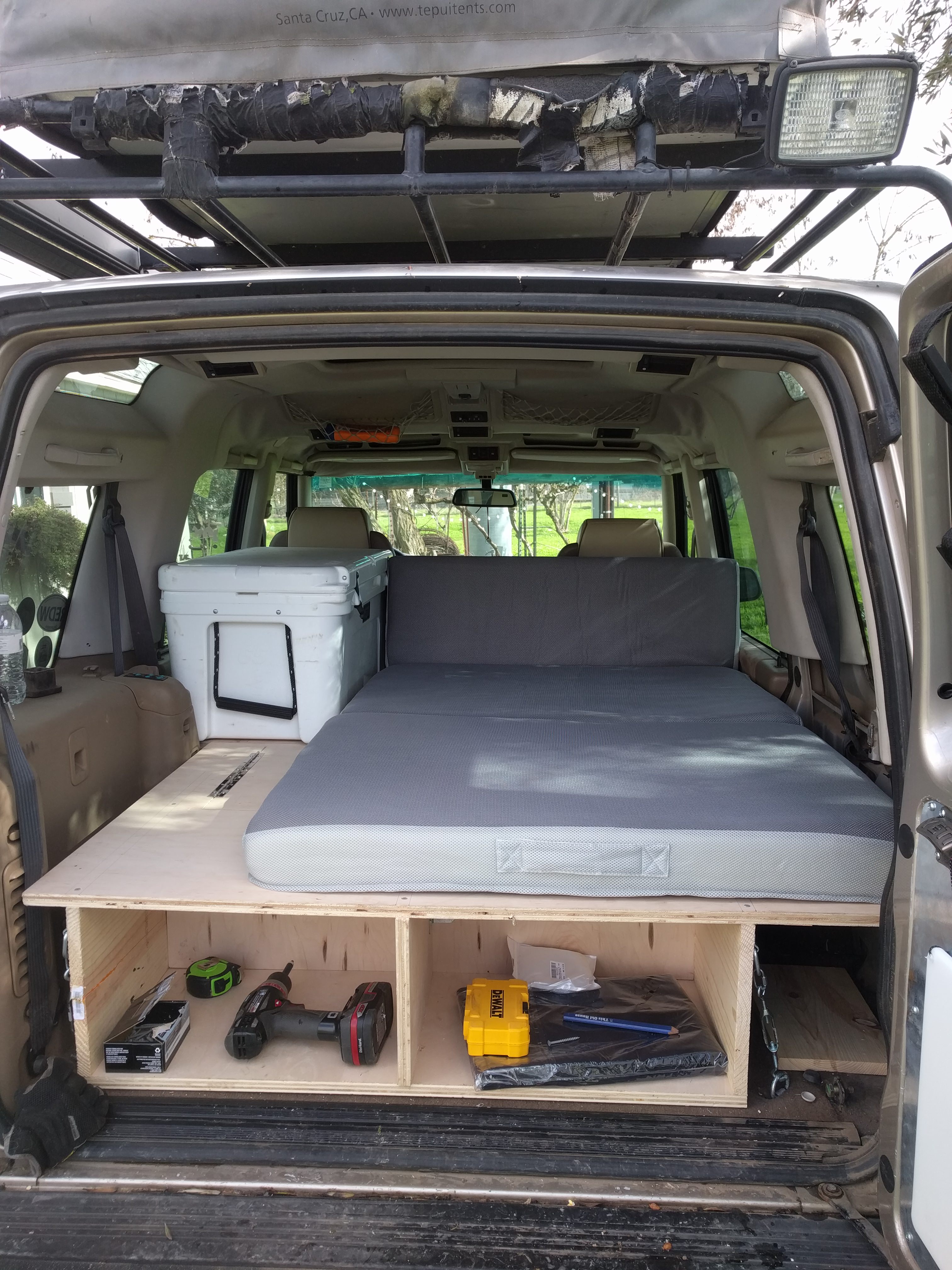 Once that was completed I decided that I needed curtains for privacy so I bought some black out curtains and cut them up to fit the windows of the Disco. Also bought some cheapo curtain "wires" that attach via eyelet bolts. The curtains get tied up with some Velcro straps. 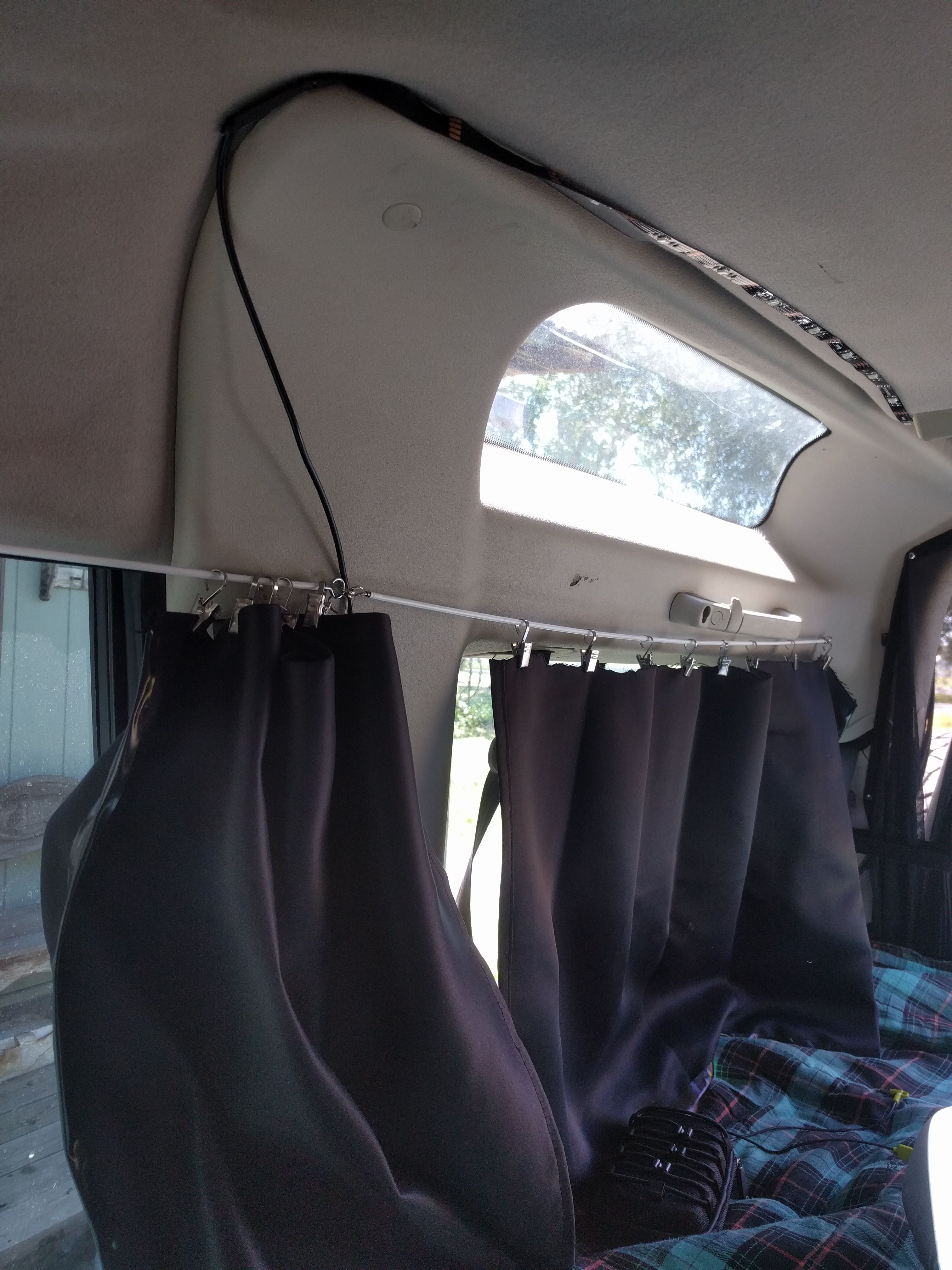 After the curtains I decided I needed lighting and a solar setup for the future fridge. The solar setup is a 100 watt renogy panel and a Renogy Wanderer solar controller paired to a 90ah Duracell battery. So far so good, all I have hooked up to it right now is a USB outlet but I'll be installing a 12v plug as well as another USB outlet and of course a fridge in the future. For house lighting I just used a USB led lightstrip plugged into the USB outlet. It's kind of ugly so I'll probably switch to something different soon. 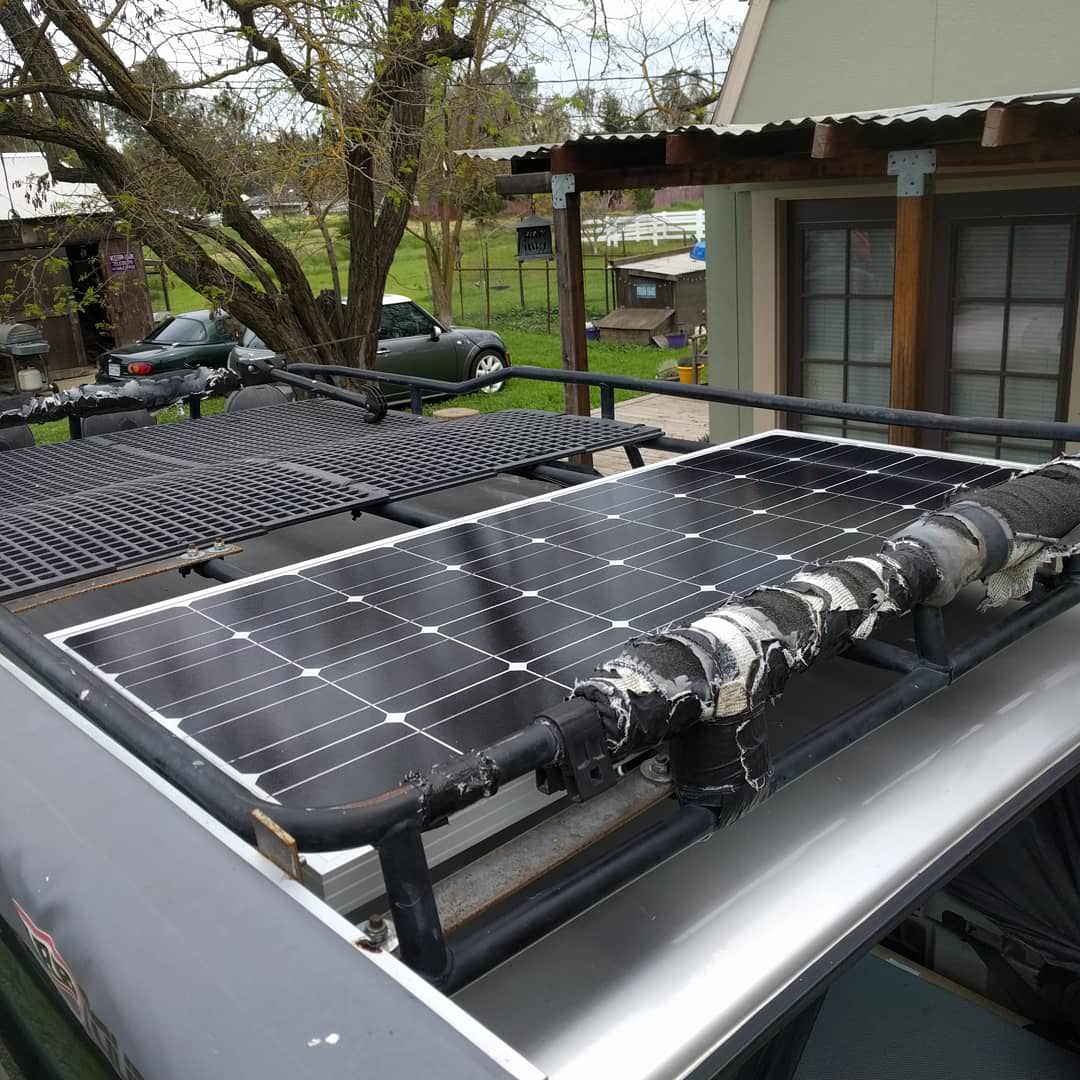 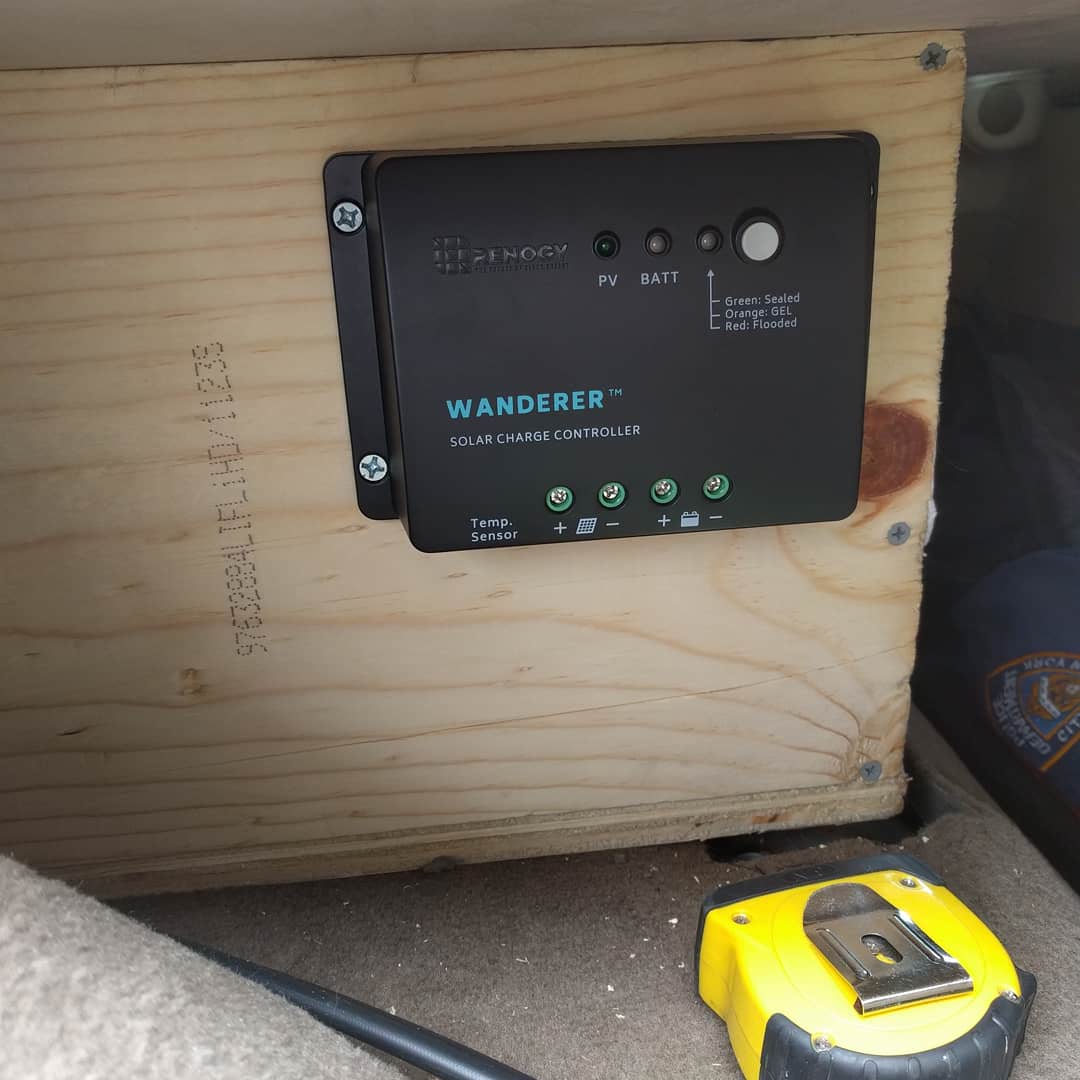 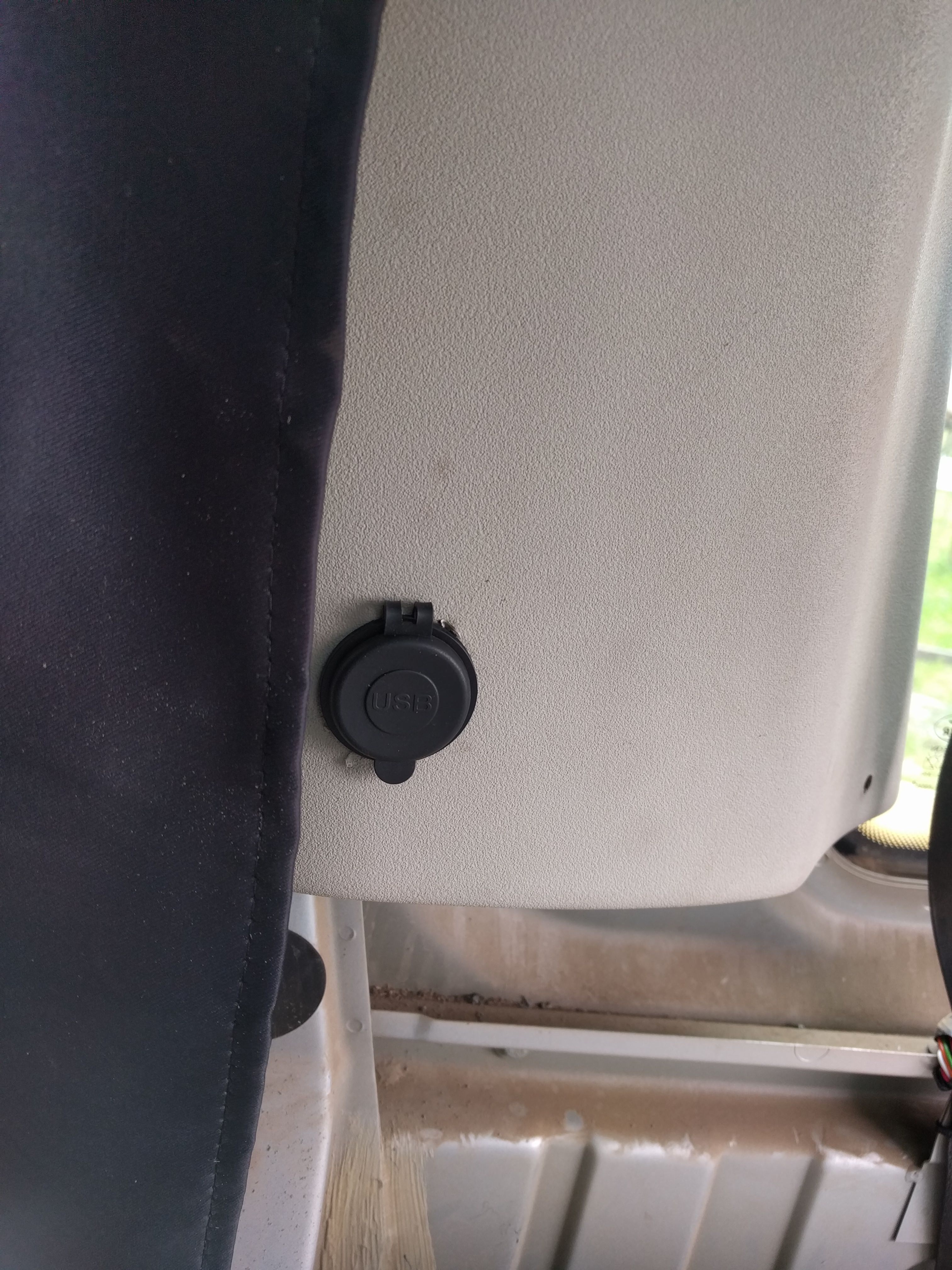 After the lighting was done I realized I would need a bug net for the rear door if I sleep with the door open. I remembering I had an old ENO bug net that I never used so I grabbed it and cut it up to fit the rear door. It's ugly but it works. 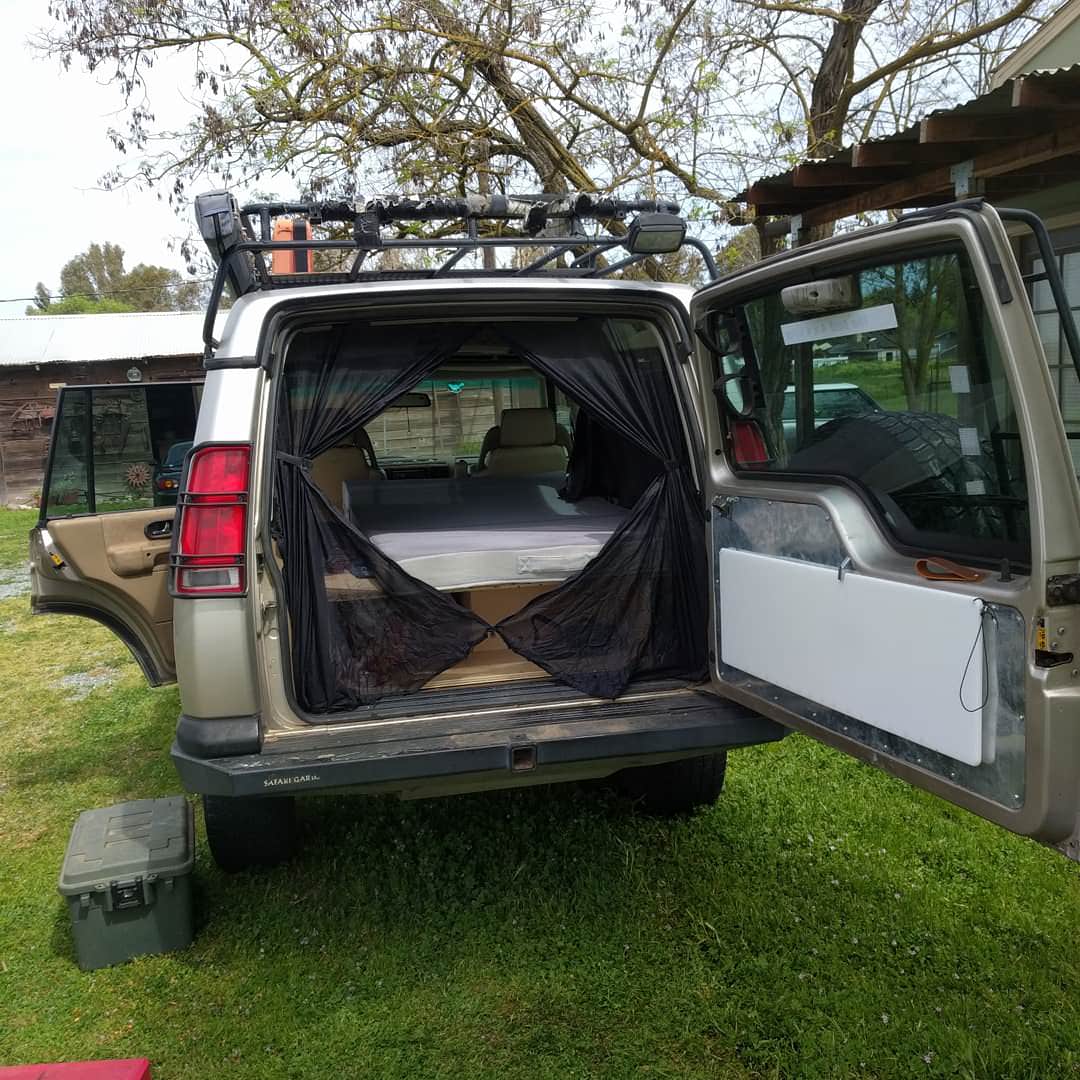 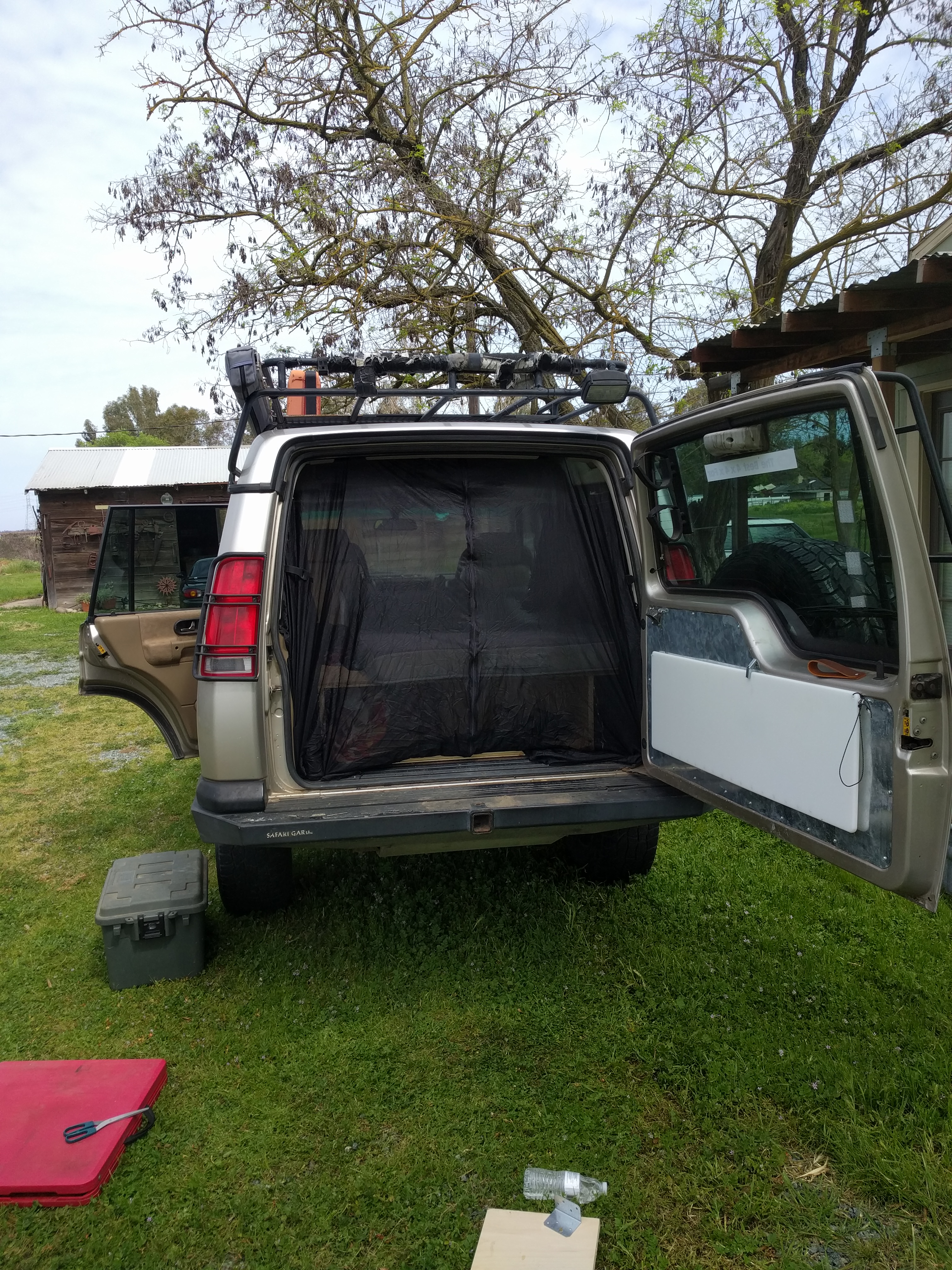 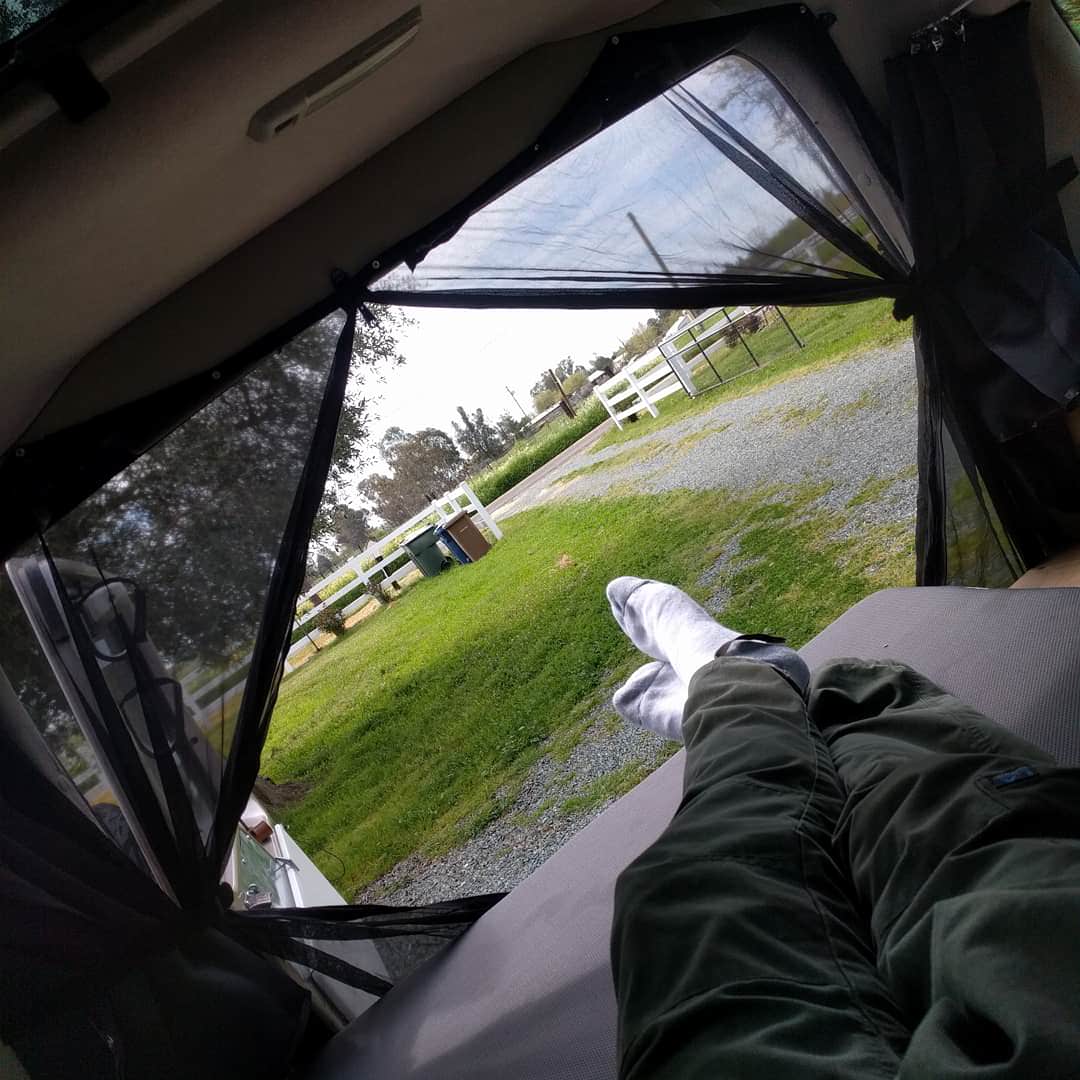 I drove down to santa cruz for the weekend and my gf was complaining about not having a shower so today I built one for her. I've seen some cool Aussie designed but they're way too expensive so I just made one out of PVC pipe. 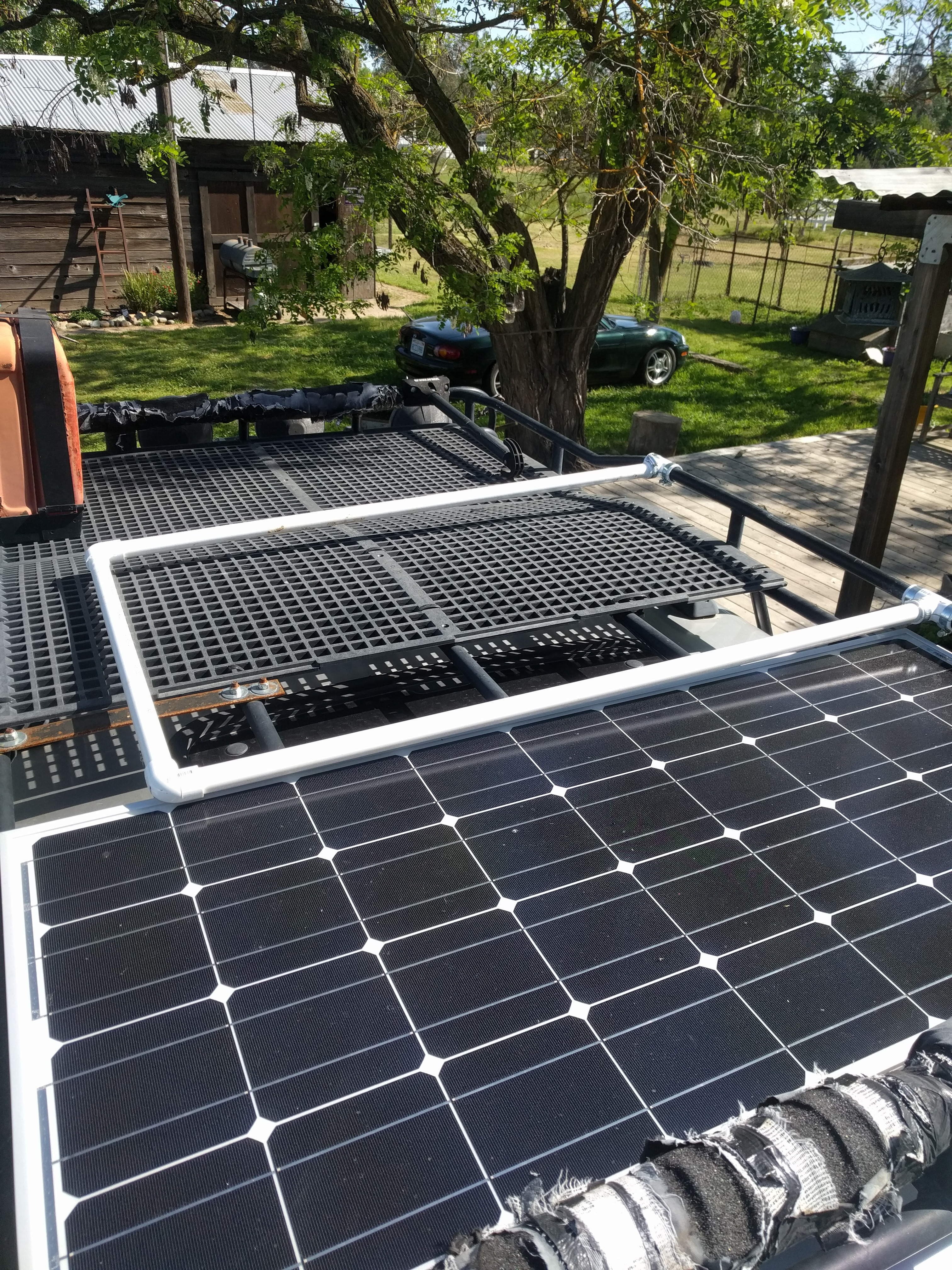 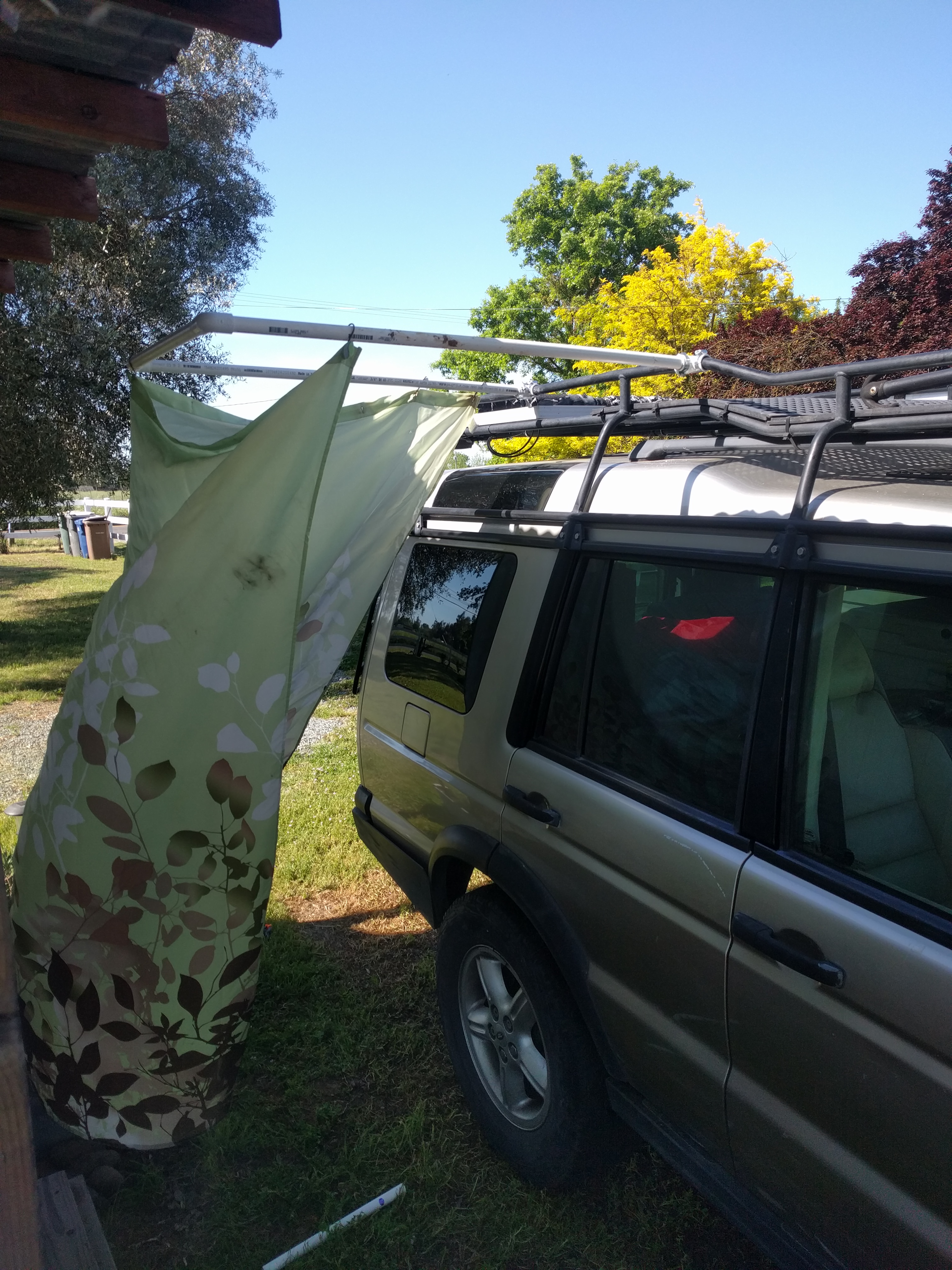 The shower curtain in the pic is too small and it's not weighted so it's flying around; I'll have to get a different curtain but you get the idea.

And that's where I'm at now. I still need to get some things like the fridge, an on board water system and a fan of some kind. So far I think it came out pretty good, I admit that I haven't gotten to really use it like I would like to but I'm excited for the summer. As it gets used I realize changes it may need and make adjustments accordingly. I may move the isb outlets for example because the USB piece sticks out and can interfere with your sleep. The space is limited and at 5'10" my feet stick out the rear door but I tend to sleep in the fetal position so with the door closed this isn't an issue. Plans for the very near future are springs and shocks because mine are done and a Dometic CD-30 fridge. 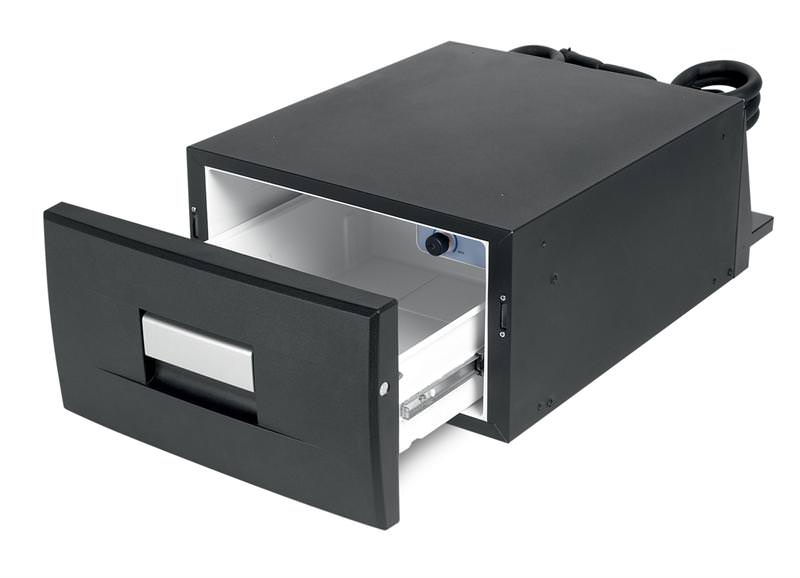 The idea with the CD-30 is that it'll fit inside the sleeping platform on the driver's side and will free up space in the sleeping area which will probably be taken up by some kind of storage. I have plans for a sink as well but that's low on the priority list. Once I get the build more or less complete I plan to start smoothing out the rough edges. Anyway, thought some of you might be interested in what I'm doing and I'll update this thread with better pictures as I finish projects up.

THAT is pretty dam awesome. I have a 2001 that's under construction and plan to have a similar build when all is said and done. Great post.
Same here with the trail not being the main focus. When I was younger, yeah, but don't need the drama these days. Just want to get there, wherever that may be, have a stogie and a Newcastle.
C

Are the last half of my pictures not showing up? Used the same process for the second half as I did the first half...

Vehicle-dependent Expedition Guide
by Tom Sheppard
From $95From CAD$138.49

Riding High: The Stories that Jupiter's Travels Didn't Tell
by Ted Simon
From $19.95From CAD$29.33

Overlanders' Handbook: Worldwide route and planning guide...
by Chris Scott
From $80.9From CAD$92.71

Enjoy what you're doing. Nice to see someone else showing love to the Discovery ll. I've been doing something similar on my 01. Most of what l've done is by trail and error, and for a winter killing project. Started out as a off road rig, but has changed gears and is slowly turning into a camping rig. Been out twice now and it's always a learning process.

This link will give you a bit of a look at my project...if it works.

Good luck, with the rest of your project.

Also, where did you get that plastic grid work for your rack?

Lots of trial and error with this process for sure but I'm enjoying it.

Also, you could easily add a few inches to your sleeping platform, by adding a piece of plywood (and piano hinge). Make it long enough to flip over onto the center console, after moving front seats forward some. I'm 6'4" and sleeping all crunch up all the time gets old.

I was thinking about that but for right now I'm ok with it. I'll need to do some more testing with the setup but so far it's been pretty comfortable. I've been trying to figure out how I can build a snorkel like you did but I'm not sure what I can use to mate the engine bay side intake tube with a snorkel mounted inside the fender since the intake tube opening is an oblong shape. Your solution was nice but I can't weld so I'll have to figure something else out

Nice setup, can you post some more pics with details?

Nice same idea as mine simple but functional
D

Very Nice. Thank you for posting this. I have a 2003 D2 that is slowly being converted into a one person camper like your for a lower 48 state road trip, sometime in the future.