Delica for a camper build

I've been looking around for a van to build into a camper, or buy it already outfitted. So far I've been looking at ford/Chevy 4wd conversions, or the factory awd Chevys. Originally I wanted a shower, which meant a high roof and long body. Now that I'm starting to doubt I'll be able to afford it, or deal with making it work, smaller vans are more of an option.

delicas seen just barely big enough, I wanted to be able to store lots of my equipment(bikes,skis,sup,etc) on the inside, which would be much harder, but the capability and daily driver ability may be a worthwhile trade off.

Delicas are much more common than I thought, plenty in Canada that are old enough to import. I've seen some with a pop top or high roof which would be ideal.

Just wanted to get some advice, on what to look for, what's problematic, and especially would like to see some well done camper builds.

Search on here and google for "Delica camper" and there will be results.
N

not another subaru guy...

These guys are legit. they just had a Delica that they recently sold after importing from japan. Scroll down and all the details are still viewable.

I'd take a serious inventory of what gear you want to haul, lay it all out in a rectangle, and measure. There's a strong chance the Delica may be too small, unless everything goes on the roof (with all the problems that brings).

My Astro is much larger than a Delica, but still significantly smaller than a Econoline or Savanna, and I'm constantly bumping up against the limit of what I can and can't fit inside it. There are MANY days when I long for a fullsize van.

I haven't used a Delica but from what you describe I think it might be a bit small. Obviously I have an awd Astro and I think it hits your marks a little more closely. The Delica is a cool vehicle, and likely better off road than the Astro but for "camper" space and daily duties and Astro is pretty nice, very affordable, package. Plus the vortec 4.3 is a good motor that does really well for freeway cruising.

If you can swing the $ for an awd express van and don't mind the larger footprint, it sounds like you'll really appreciatethe space. Obviously you can save a lot of $ on any van if you think you can manage without awd/4wd.

I'm thinking to upgrade to full size soon because we could use the space. I like the road manners of the express van over the full sized fords. Been very happy with the awd system on the Astro but sadly it's much harder to find and awd express at bargain prices.

Thanks for the advice so far! This is why I really want a high roof or pop top, if I could put bikes/equipment under the bed platform I think that'd be ideal. It looks like people have enough room for a bed and a stove/fridge(maybe sink). Which besides storage is all I really need.

I'm leaning towards going with a smaller van because when I have extra room, i tend to waste it, and carry more crap I don't need and end up loosing that extra space anyway, i like the idea of forcing myself to downsize sone. especialky if it's not going to be a home on wheels with a toilet, shower and all the extra comfort stuff.
P

Consider parts availability for your location in case something breaks... yes you can import it, but how easy will you be able to get replacement parts for it?
M

Van on the Run

Sandy89, I had most of the same requirements as what you are looking for and end up going with an AWD Astro w/ pop top. I found the Astro to be more than sufficient with space, comfort, mpg, daily driving, and reliability. You would be surprised how much you can stuff in an Astro without making it feel cramped.

I agree with Herbie and take a serious of inventory of what you are wanting to store in the van. I found that a smaller van really forced me to narrow down my wants vs. needs.

Here's a walkthrough of my van interior, I went with storage containers rather than cabinets because I feel that would keep my space needs a bit more versatile and flexible.

not another subaru guy... said:
These guys are legit. they just had a Delica that they recently sold after importing from japan. Scroll down and all the details are still viewable.

I imported a Delica from New Zealand a couple years ago and have it camperized similar to a Westy minus the sink/stove/fridge. For starters, it's smaller than than a Westy on the inside and since I didn't want to put in a pop-top I decided that a sink and stove were out. I have a small 5lb propane tank that I setup in the back so when I open the tail gate I have my kitchen ready to go. On the inside I framed in the engine block and installed cabinets under the far windows and built a bench/bed combo. I've taken it all over including a bunch of extended trips to Baja and it's been great.

I will say that it's small inside and that I wouldn't be able to fit a bike inside the van. I have a safari rack up top that allows me to store gear but keep in mind these are tall and top heavy so you don't want too much weight up there. Having driven this for a few years now my biggest complaint is the lack of power. The diesel is rock solid but only puts out 92hp so driving up mountains and on the beach is tough. i'm in love.
Is it LHD and what kind of mpg does it get?

It's a RHD and I usually average 22mpg.
S

Thanks for all the advice! Another thing to consider is that it would be nice if what i get were somewhat decent as a daily driver. I've got my summer/fair weather only sports car thats almost a daily driver when its nice out, but in the winter months especially, whatever van i get will need to be my go-to, especially with snow on the ground.
This is why i've started looking at smaller vans.

Anyway, i found a pop top with bed in Canada, old enough to import, looks like its in awesome condition, i dont see it lasting long so I might just have to jump on it. I think the pop top might just give it the extra room i need.

This was my original idea for bike/equipment storage..

Something along the lines of that, storage for all my equipment, and a bike or two, with the bed on top. Dont think it would work with the standard roof delica, but with a pop top I would think you'd have enough room to store a couple bikes, front wheel off, maybe both if needed, as well as some extra stuff, and still have some decent room to move around with the top up. that seem at least somewhat realistic?

And one other question for those of you that have driven or ridden in one, are they as top heavy/unstable as some people say? I mean, whatever I get, it needs to be 4wd and offroad capable, I wouldnt think a delica would be any different from most lifted vans. im not expecting to be able to haul around corners at high speed, i'll just cruise nice and slow. but i will be driving on twisty roads, mountain passes etc. so its a concern.

I think the Delica is über cool, and have looked at several locally (I live 10 minutes from Canada). Not one to poo poo anyone else's ideas, I do think that a plan to house bikes in one is unrealistic. I would definitely plan on carrying the bikes on the outside of the vehicle. If theft is a concern, you could disassemble them as for shipping and keep them out of sight in a rooftop cargo box.

Again, I really love the things and believe strongly that one should factor one's feelings into such decisions rather than being guided solely by practicality. I'd suggest taping or chalking an outline of the van's dimensions on a wall & floor and playing around with the size. Here's an idea of the size relationship: 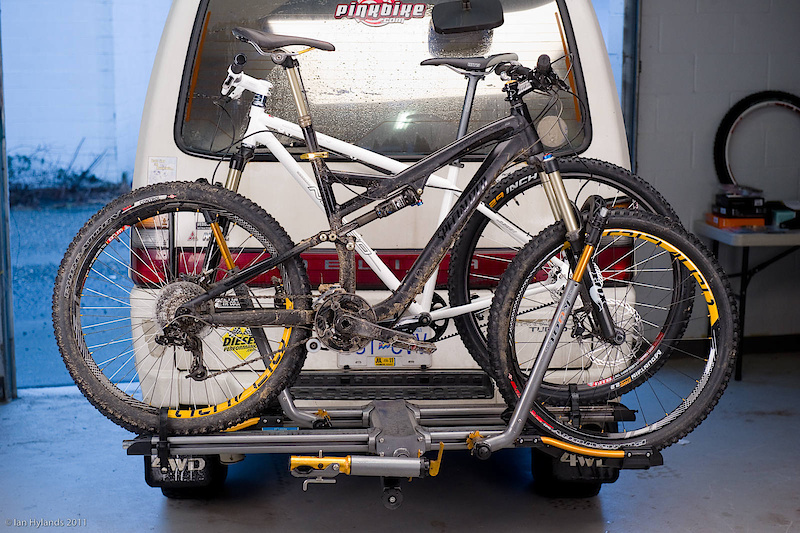