I've been lurking here for a while now, have been thinking about buying a truck for about a year now and specifically looking for a G for 6-8 months. Last Saturday I went out to the middle of nowhere with my good friend Drew (suppatime) to check out a 1991 White w463 SWB, which was exactly what I was looking for.

We saw it, and it was GORGEOUS. Very well taken care of. The car was being sold by Jean at G-mercedes.com. We have been communicating over the few weeks prior, trying to figure out when the car was going to get released from customs. I had originally contacted him over a month earlier, lucky for me, I was the first one in line. Jean seemed really honest and had no problems painting the full picture of the car both good and bad. His paperwork was all all in order and was confident (and honest) about registering the car in california. He said it can be done, but the ease of it all depends on how much the person at the DMV window likes your face. Seemed accurate from my research, Drew agreed.

It was my first time driving any G, but honestly, the first thing I did was open the 3rd door, and as soon as I felt how solid and heavy it was, I was already in love with the machine. We took it for a little spin around the property, Drew drove it. We pushed every button and turned every knob. It looked and felt like it was a very well taken care of 5-year old car. I couldn't believe it. Onto of it, it had all of the service records, the single owner took VERY good care of it. There was a couple issues, undercarriage surface rust, pass door lock doesn't work, and a few other small things, but they were all pretty cosmetic. The truck ran beautifully, 5 sp transmission was smooth as butter.

I was holding onto 5k for repairs, and some upgrades, as it turns out I don't have to really do any with the condition this truck is in, and I knew I would never find one as clean as this, and it was exactly what I wanted, so I paid his asking price and we were on our way. I felt bad, someone was flying in and had landed just as we were finalizing the deal, haha oh well, sucks for him, he was aware someone was looking at the truck before him.

I had my insurance broker pull certs for me and we were on our way back to LA. Jean's business is indeed in Utah, so we decided to do pay the 6.5% sales tax in that state to save me a bit of money, turns out that didn't work ...

Went to the Santa Monica DMV this morning at 730am. The lady I got was nice and seemed quite helpful. She asked for the title, bill of sale, HS-7 form, EPA form, import declaration and title. I provided all of the documents, she started the registration process. As it turns out, if you purchased your car in the past year, and want to bring it to California, they will charge you the difference in sales tax between whatever state you bought and Cali tax, so I had to pay an extra few hundred dollars, so in the end I never saved any money and had to pay full California sales tax. I paid tax and registration fees, and she handed me a temp registration right then and there, but told me I had to get Vin verification and bring back the original foreign title so they could send it to Sacramento.

The VIN came up as a gasoline car (probably because it is a European vin and did that by default) she mentioned I would have to get it smog checked. I kindly handed her the DMV print out I had showing that diesel cars from prior to 1998 are exempt. She took that to her boss, and then came back and crossed out that requirement for me. She sent me to the back of the DMV for vin verification.

My vin verifier didn't seem to like her job very much. Was annoyed she couldn't see the vin in the windshield, and had to lean in on the truck to see it in the engine bay. She had an older dude help her because she wasn't sure what to do. She seemed to want to just get rid of me so she didn't have to deal with me (unlike the first DMV lady who seemed like she actually wanted to help me get my car registered). The vin lady disappeared for a while, and then came back and said I had to go to California Highway Patrol to get the vin verified, so they could verify the year. I told her the year was verified on the title, and import documents, but she said she needed original copies. Then the other dude stepped in, and started giving me info. He said again they need originals, I told him I have the original title, but then he still said he couldn't do it, when I asked why he WOULD NOT give me a real answer. I pestered him to clarify, not to prove that he just contracted himself (which he did) but to try to get clarification on exactly what I need to do. He was not helpful. In the end he stopped answering me and kept repeating himself "Go to CHP, go to CHP"

But anyways, I have temp reg until the end of July, everything seems to be copacetic, I have my CHP appointment June 20th, so hopefully that goes well, and then I can bring that paperwork / vin verification back to the DMV along with the original title to be shipped off to Sacramento to get the official title and registration.

But enough words, here are some pics!! 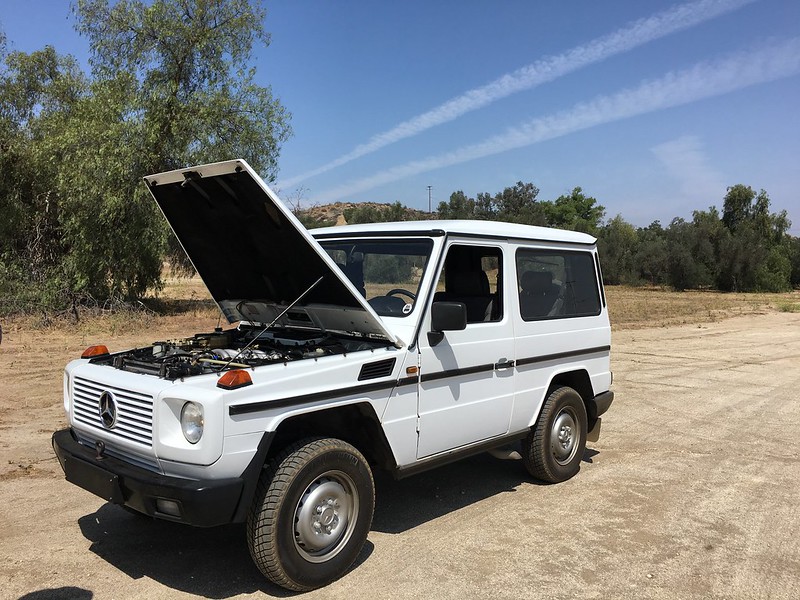 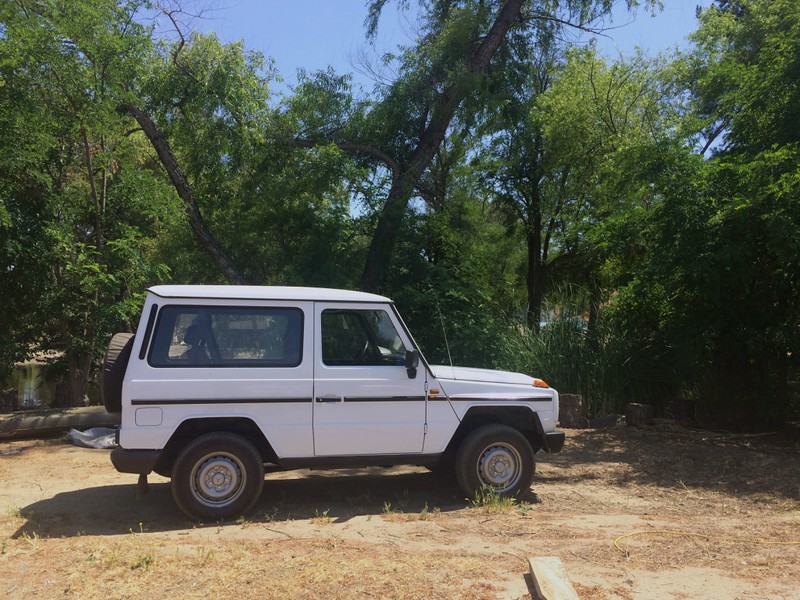 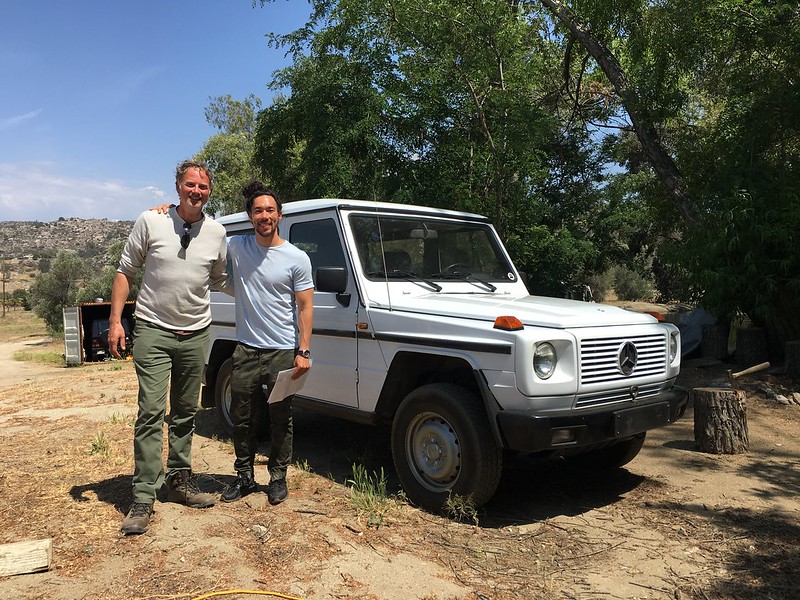 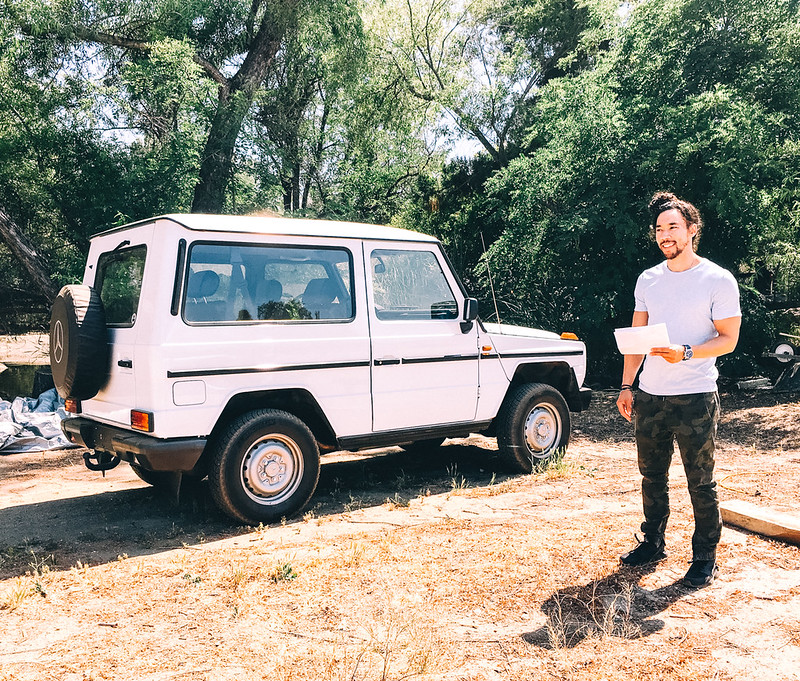 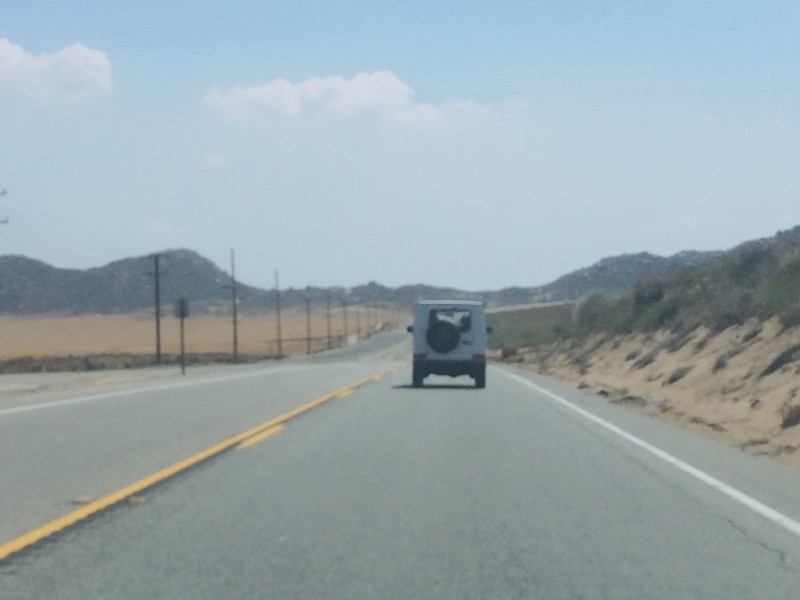 First diesel fill up in my life 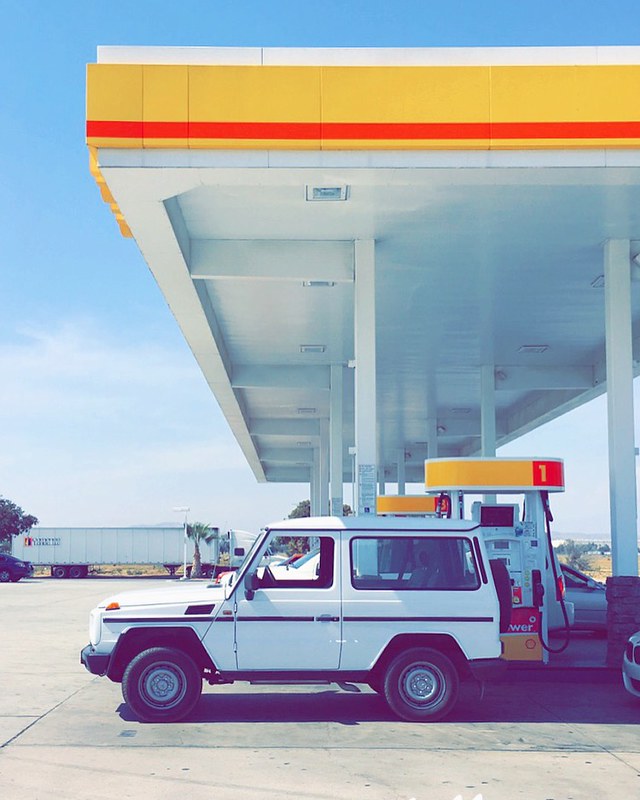 Made it to Santa Monica! 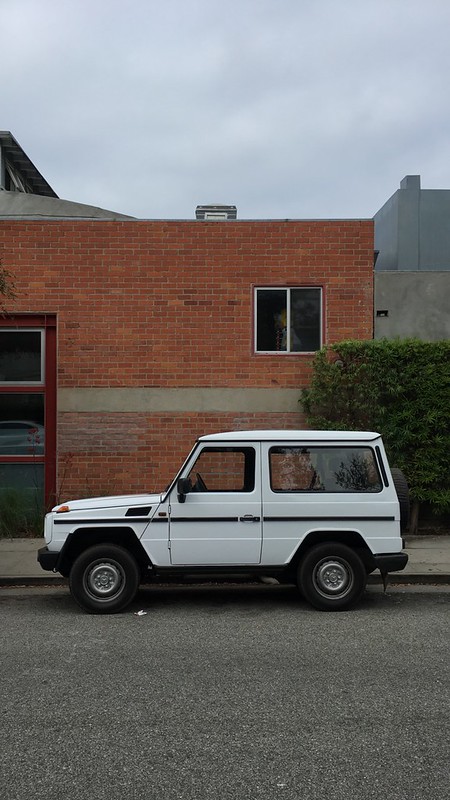 Mods to come are fenders, new wheels and tires, clearing out the amber, ultimately a roof rack .... but as you guys know I spent my extra 5k on the car itself, so this stuff might have to wait.

haha it's about as new to me as can be, considering the test drive was actually my first time in one!! haha

Too the G out on it's first off-road trail today!! I literally looked up the easiest ones in Big Bear and decided to start with that. I'm happy to ease in, I was pleased when I went up a 5 foot dirt hill and had to engage the lockers. haha. Here are some pics.

Serrano Campsite, where I stayed. 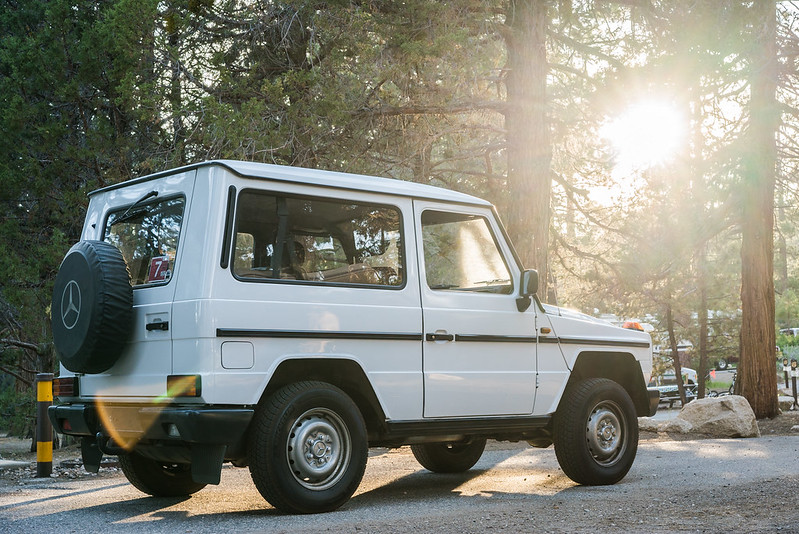 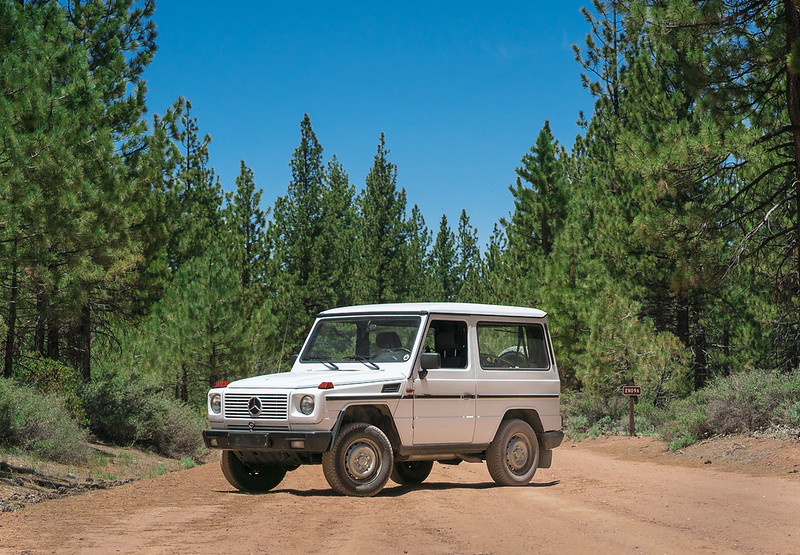 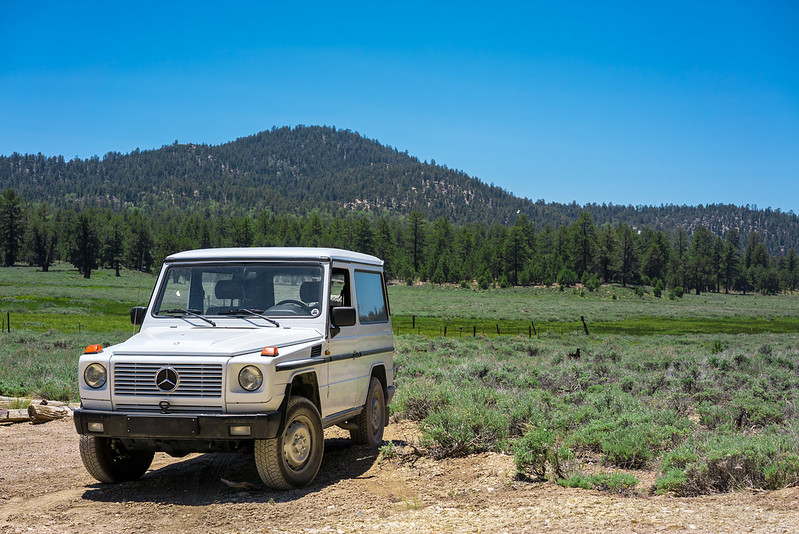 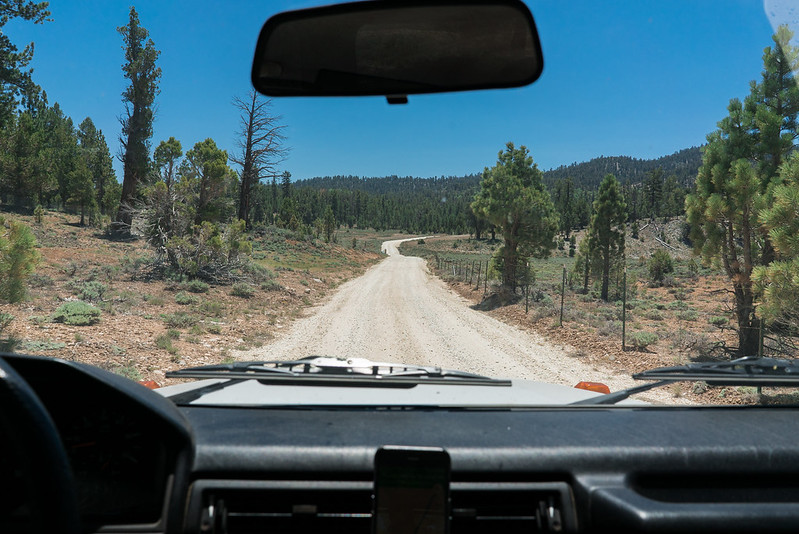 In case your seller didn't give you a copy of the Vehicle Data Card, it's attached.

DUTCH said:
In case your seller didn't give you a copy of the Vehicle Data Card, it's attached.

Oh wow!! Thank you so much. I'll bring this in with me when I go to CHP for the VIN inspection.
C

Does anybody have an opinion on Frontrunner roof racks? (I'll do a search after this, I'm just in the middle of this post...)

The whole idea of the car is to go on camping and surf trips, so I sort of need to bring this stuff with me!! Thinking of that set up + a ladder.

Any search you do on any forum you will find out everyone has good things to say about the Front Runner roof racks. Mine has been holding up great to 2 New England winters and so are the accessories.
D

I love my Front Runner roof rack! sooo many options to spent money!
today came another shipment...
but I love the quality so far (2 Michigan winters down) and fitment.
and it's fairly light for what you can load up.

Echoing what the others have said, I've had a great experience with frontrunner racks and how modular they are. The gwagen accessories ladder is a good choice too as it does not require any drilling into the body or anything like that.
C

Don Raptor said:
I love my Front Runner roof rack! sooo many options to spent money!
today came another shipment...
but I love the quality so far (2 Michigan winters down) and fitment.
and it's fairly light for what you can load up.

Looks great!! and it looks like you have an awesome rig there!! It seems like everyone can't say enough good things about the rack, I think it's going to be a purchase for me.

NYCRover said:
Echoing what the others have said, I've had a great experience with frontrunner racks and how modular they are. The gwagen accessories ladder is a good choice too as it does not require any drilling into the body or anything like that.
Click to expand...

Oh thank you!! That's the ladder I was actually looking at, so I appreciate the unsolicited mention! Can't wait to get this rig outfitted!!
D

I can highly recommend Karl's products from G-wagenaccessories.com!
the ladder is awesome!
orc has some good stuff too but the import of that is kinda hard...

UpRacks (http://www.upracks.com) do a full-welded and very nice rack, the same that ORC sells as theirs. I like that the profile runs along the car, not across like on the FR, the FR also is a bolt together option, that I don´t really like.

Karls stuff is great yes, but the quality of the powder coating is really bad and not up to the challenge of Scandinavian climate - my latter is badly rusted after only a few years.
C

thebigblue said:
UpRacks (http://www.upracks.com) do a full-welded and very nice rack, the same that ORC sells as theirs. I like that the profile runs along the car, not across like on the FR, the FR also is a bolt together option, that I don´t really like.

Karls stuff is great yes, but the quality of the powder coating is really bad and not up to the challenge of Scandinavian climate - my latter is badly rusted after only a few years.
Click to expand...