When I lived in London in the early 2000's I collected most of the issues; I've also got a computerized/searchable index of the articles (the index also includes JP Magazine and jRations, both of which I have all of the issues in my collection) so last night I looked to see if there was anything interesting in Jeep World about Mahindras since they were sold in the U.K. There were a few articles but not much interesting that hasn't been posted about in this thread already. Anyway, since a few days ago I posted a photo of a square headlight CJ-3b, here's another photo of that model from the issue of Jeep World pictured above.

Apparently this model was called the Bahia. Two other things to notice in this photo - the 9-slot grille (like a Willys MB) and the soft top with no side windows.

It may be that the Bahia was only a U.K. model; I've never seen any references to it in India nor have I seen one myself in India. But it might have been an Indian model as well, I just have no evidence of that.

About the windowless soft top - it may be that it's a that way to enable it to be taxed as a commercial vehicle, which gets taxed less than a private vehicle in many countries. Jeep offered a commercial version of the CJ in the U.K. back in the 80's:

Speaking of other sources of information on Mahindras, I posted a couple of weeks ago about a new book on the history of Mahindra that's available in India (https://expeditionportal.com/forum/...mahindra-of-india.222439/page-18#post-2922008). I ordered a copy from amazon.in and had it shipped to relatives in New Delhi; it arrived a week ago. I'm just waiting for a few other things to be ready to ship from there to me and then everything will be shipped together so I should have the book soon.

I've never seen a Willys wagon in India but apparently Mahindra offered them:

Another early ad an and early brochure:

Conversions into whatever is needed are fairly common, especially in rural India. I spotted these two in Rajasthan. They both seem to have started out as full-body Marshals and based on their similarity it may be that they were done by the same shop although the two photos were taken quite a distance from each other.

Aftermarket replacement bodies are offered for some models in India. 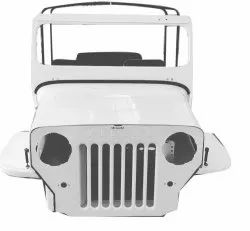 Another source for body parts: https://www.indiamart.com/royalbody-parts-accessories/mahindra-body-parts.html

An early CJ-4 based Commander. Check the spare tire mount...

The Armada. Note the grille overlay with square headlights.

One with some mods (and the grille overlay removed):

The Bolero is a later version with a new cowl and front clip:

A few other random photos from Rajasthan.

The pickups are so flipping cool! I love the tall bed sides and I think the proportions are just right! We really missed out in my opinion here in the states

A video from their 61st (!) Great Escape event.


This video isn't a Mahindra Adventure event, it was taken in nearby Burma - and it doesn't look like fun.

There used to be a better version of the basic boned Armada called as Armada Grand. I drove Armada a lot during the nineties. It was a heavy vehicle, no creature comforts and a harsh ride. No power steering meant turning it was a major effort in itself in the mountains. But it was sturdy and capable of surviving a lot of abuse but then thats what Jeeps are all about.
Bolero, first Gen was the successor to Armada. Armada established Mahindra in the market once again but it was the Bolero that really took the company to another level. Bolero has come a long way since its early days and still sells in huge numbers.
How can jeeps and mud not be fun?

The Burmese ones more closely resemble Jeepneys of South East Asia though.
Last edited: May 25, 2021

jscherb said:
This video isn't a Mahindra Adventure event, it was taken in nearby Burma - and it doesn't look like fun.