Dalko43 said:
Instantaneous mpg readout's DO NOT equal average mpg's....but you can enjoy that fantasy if you so choose.


What I am saying is that all things being equal, or as much as is realistically possible, between a NA v8 and turbo gasoline of similar output in a similar platform, the turbo gasoline engine does not have much, if any, mpg advantage for working (key word there) applications.

So maybe instead of comparing a brand new 2.7l ecoboost F-150 to an older 5.7l Tundra, compare something that is more apples-to-apples. Go tow 6k lbs with the 3.5l ecoboost and 5.0l coyote...tell me how much more "efficient" that ecoboost is. Because plenty of people, besides TFL, have done those tests...the mpg difference is negligible.
Click to expand...

Dude....the pic I posted shows the AVERAGE fuel economy over a given distance...hence the three letters "avg." Had you actually driven an F150 you would have been familiar with the display and know that the average and instantaneous displays are two completely difference screens. Now, before you start to cry that its not accurate, I took the 5 min to enter the correction factor when the truck was brand new so it reads with in a tenth of being hand calculated. I underlined it for you:

Lastly, I've had the 3.5 and the 5.0 in work trucks, both 2wd Super Crews with 3.55 gears, 6 speeds, OEM tires, same tools, same emergency lights, and the 6.5 bed. The only differences between the trucks was the paint color and the motor. With all other things being equal, the 3.5 got the same if not better fuel economy than the 5.0 under all conditions. Where the 3.5 got worse was when it was towing at 80mph (because it easily could) and the 5.0 was stuck at 70mph (because anything more and it was struggling). If the speed was kept the same, the trucks got with in 1mpg of each other while towing.

Drivers get worse mpg out of the 3.5 because they can easily cruise at a higher speed and accelerate much faster while towing a heavy load. While the 5.0 is huffing and puffing and stuck in the right hand lane, the 3.5 is in the left lane passing traffic.... You'd know that had you actually driven one.


Now, I'm putting you back on ignore. Have a wonderful time "bench racing" vehicles that you have never owned...and have flat out lied about driving.
Last edited: Aug 8, 2020

DRAX said:
Those images aren't showing instant MPG, they very clearly show the avg MPG for the trip meter mileage shown. So, not sure what you're going off about with that comment.
Click to expand...

I'm guessing the three little letters "avg" threw him off. He probably never saw them on Fuelly or a TFL video and couldn't figure out what it stood for. Perhaps I should have underlined it?

Ah man, I hate to miss out on mileage discussions. I am over the moon with what my 3.5TT 2018 gets for mileage. I have 10k miles logged on fuelly. Take a peek sometime.

I also can see amazing economy on unladen trips spent at 65-72 mph. The image below is about 0.9mpg optimistic. I haven't done any towing, so I can't speak to it, but I still get good mileage when payload is high. 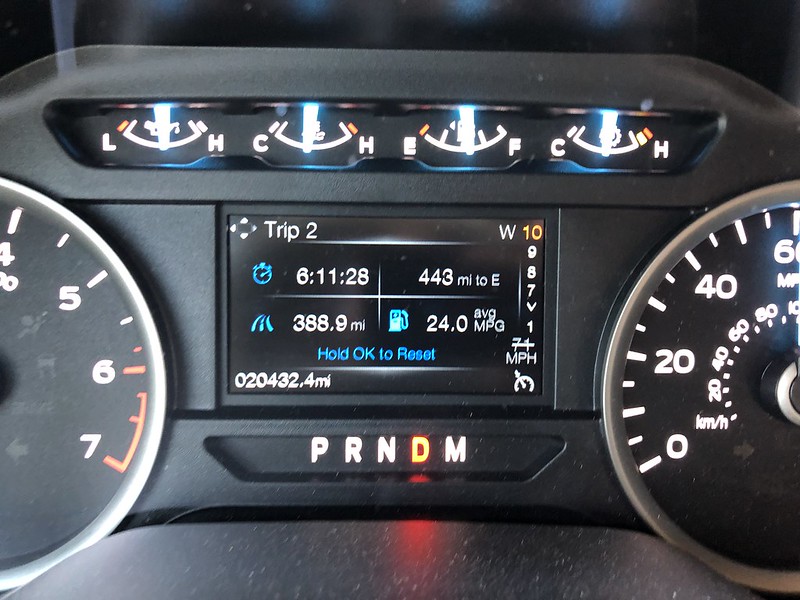 plainjaneFJC said:
Thats better than my 2.7 is getting. After the level and 34" bfg's I am getting 18 mpg.
Click to expand...

plainjaneFJC said:
Thats better than my 2.7 is getting. After the level and 34" bfg's I am getting 18 mpg.
Click to expand...

Ya know...a tune could help with that. If you run the adaptive tow tune from Brew City Boost you'll get back the power you lost and most of your mpg.

Jnich77 said:
Ya know...a tune could help with that. If you run the adaptive tow tune from Brew City Boost you'll get back the power you lost and most of your mpg.
Click to expand...

May do something, only 26k miles on it, don't want to void warranty.

plainjaneFJC said:
May do something, only 26k miles on it, don't want to void warranty.
Click to expand...

Ahhh..got ya. Did you chsnge the tire size using Forscan? That can help with the mpg a bit.