Carrying skis on the side of my van, using rain gutter.

I'm trying to figure out how to carry skis outside my van. Im out of bumper space out back, and i've got a pop top thats already on the verge of having too much stuff on top, so now i'm looking at the side of the van. Is there a solution out there that would work? most gutter mounts are just to hold cross bars across the roof, which obviously would get in the way of my pop top. this is the best thing ive found that could potentially work and stay out of of the way of the pop top, just dont know how i could mount it.
https://www.etrailer.com/Ski-and-Snowboard-Racks/Thule/TH575.html?feed=npn
N

I bet you could use a PVC pipe as a tube for them and figure out how to mount it. A couple of photos of your rig would help with ideas.

A lot of van guys attach stuff to their side ladders. Might be a way to incorporate a ski rack onto one of them.

One of my buddies removed one of the rear windows on his van and replaced it with metal and made a paddle board rack that affixed to the new window. Thought that was a pretty crafty idea.

Personally I don’t like my boards on the outside of the rig cause they get winter road grime, but at times there’s no other way. Either way, good luck and report back if you figure something out.

Vehicle-dependent Expedition Guide
by Tom Sheppard
From $133.97From CAD$117.12

I was just thinking about this today, looking at a 10' high sprinter with a ski rack on top.
I had channels for a Thule rack stuck on the cab of my pickup, glued with a few rivnuts to secure it.
It is still waterproof and is happy to hold all the crap I put on it, this might be a decent interface, being able to use commercial rack components.
I have a hard time imagining that a rack will be much different on the side of a vehicle as opposed to the top, not more than 1-3mpg but much easier to use.

A couple simple brackets fabbed up should do it. Done right you could even glue them on with SIkaflex or something similar.

Jimmy Buffett and others mount surfboards on the sides of their van so there's some inspiration for you. Why not add some of that cargo track stuff that you see on utility trucks and the backs of some of the vehicles on here. First example I could find- https://www.cargogear.com/Shop_by_Category.aspx?page=all&cat=655 You can even get snap-on plastic covers for it so that when it's not in use it looks kind of like side molding.
L

Is your spare tire out back, underneath, or up front? I made a rack that hangs on my monteros spare. I started with a old trunk mount bike rack. The loop that rests on the trunk lid hangs over the top of the tire and the rack gets strapped to the tire. I used an old pair of yakima ski racks I bolted to the down tubes. Granted here in STX it gets used more for fishing rods but it used to carry skis. Takes about 2 minutes to put on and off.

Or just use a rack like surf fisherman on the front bumper and carry them vertically. 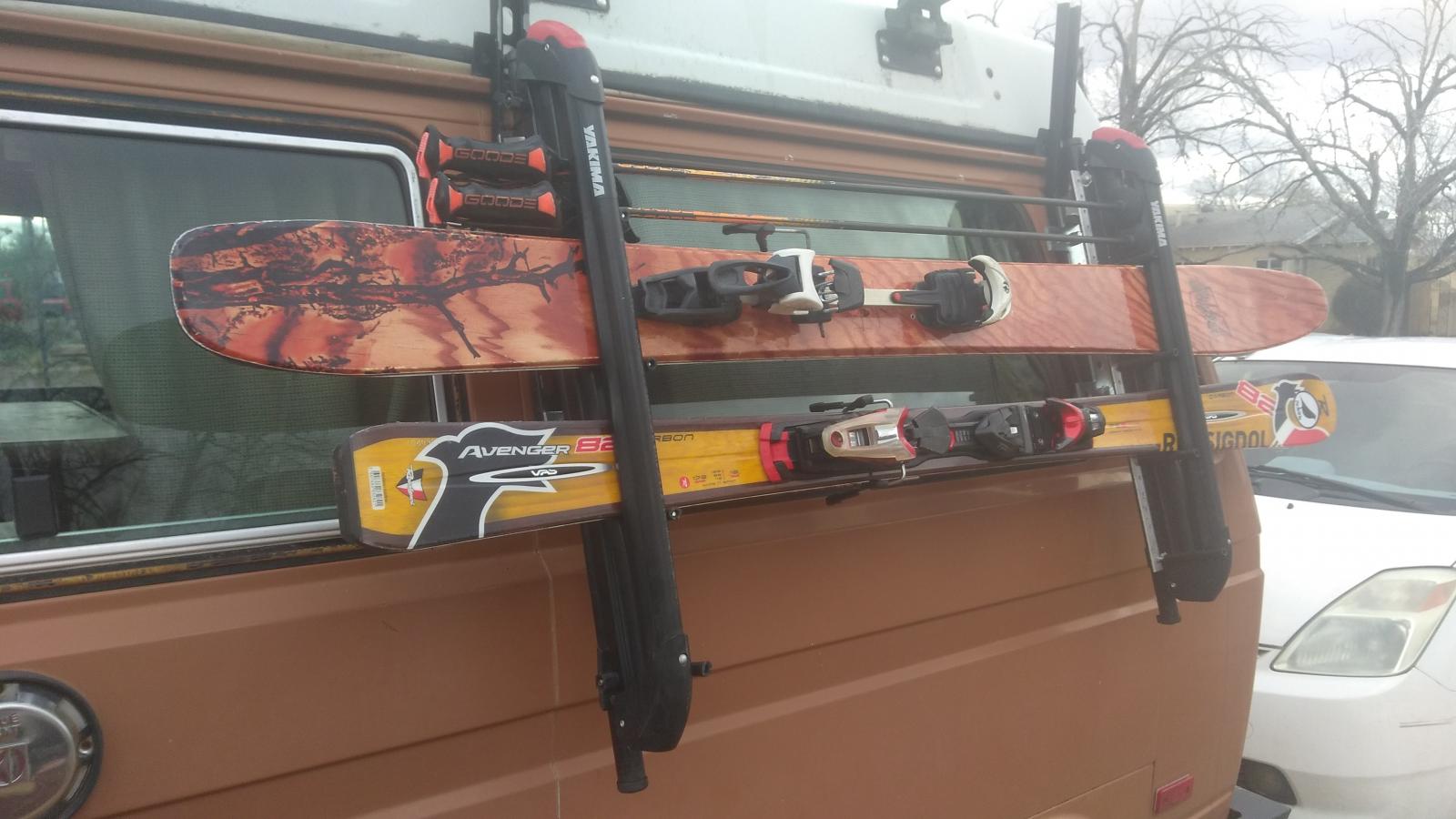 Those are the exact Yakima racks I used.

shenrie said:
One of my buddies removed one of the rear windows on his van and replaced it with metal and made a paddle board rack that affixed to the new window. Thought that was a pretty crafty idea.
Personally I don’t like my boards on the outside of the rig cause they get winter road grime, but at times there’s no other way. Either way, good luck and report back if you figure something out.
Click to expand...

Are you talking about me?
I made a snowboard rack attachment as well. Still in the raw, prototype, testing stage.
I don't really like having my board outside either, road grime gets on the base easily and makes it slow. Also not a big fan of having my gear on display.
I realize this isn't "off the rain gutters", or "for skis", but it might help with some ideas. You could glue t-slot to the side of the van, which is what I would recommend over the e-track I used.
These are the same Thule racks as in the OP, which I should add wont hold skis and a board but *might* hold two pairs of skis.
I bought mine off ebay with no keys for $60, I had Thule lock cylinders and keys already. These racks cant be used without key/locks.
If I were to do it over again I would likely use a clamp style rack like the Vanagon above since we haul skis and boards.