Captain Texas said:
Got some things in the works for the JK.

I met Tom during the Ghost Divide Expedition last year with NMBR and recently he has been working on a 100% rear seat delete for the Jeep JK. Reached out to him if he was willing to make this a product and he said yes. Gave him a deposit for one and should expect to get it installed sometime in mid-June. I love the Goose Gear plate system don't get me wrong but the fact that for the seat delete plates I would need to get the trunk plate, then the crazy high prices for the 60 and 40 together made me find an alternative. I plan on trying to make a plate system for the trunk to flow with the seat delete plate and for a way to me to add a slide for a fridge or cooler. 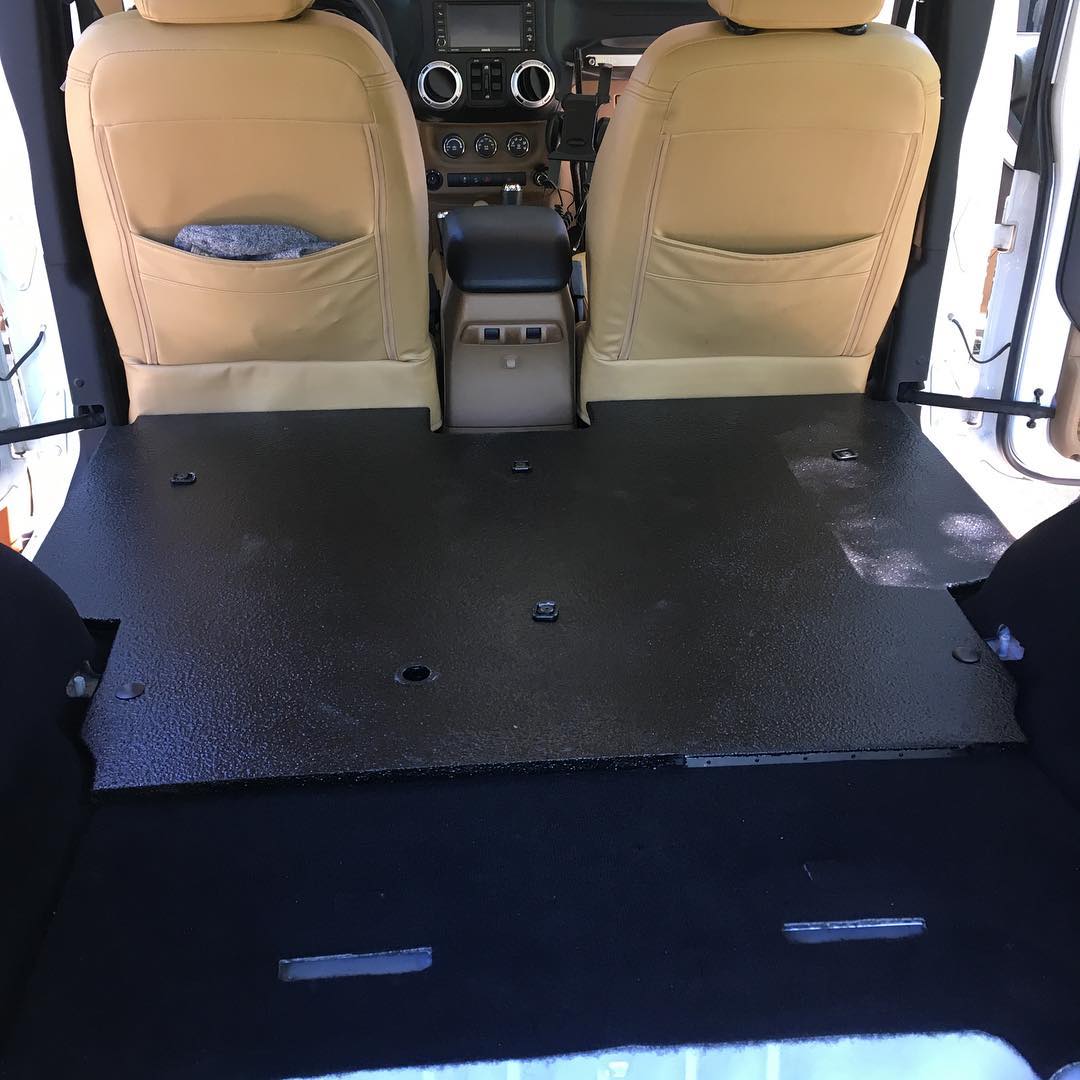 Also reached out to Tribe4X4 to get an estimate on what it would cost to get an AEV 3.5" system installed. After a lot of thinking and planning, I think I am going to keep my JK long enough to justify continuing modification on it. Not 100% committed to the new suspension because I need to see if I can afford the extra height to fit in my garage.

Also ordered some new AC knobs in Anvil from AJT Designs. Should be in by the end of the week.
Click to expand...

Interested in those knobs. Anything to get some of the chrome accents out of the Jeep. One of the reasons I love my Recon is because the AC vents are black. I like the knobs and might even look at the shift knobs as well.

jktowhere said:
What made you decide to hold off on a jl and let the jku for longer? I love this Jeep so I’m glad to hear it.
Click to expand...

Well the fact of the matter is is that my JK is paid for, and I think it would be a fairly poor financial decision to sell it to get a JL that I would still have to sink tons of money into to get it to be where the JK is, and then have to make monthly payments on top of that.

Also, I am still under the belief that the JL is a new platform and has not proven itself as the JK has. Not to mention as well that the JL is just not different enough to be something I would consider. Had the same issue when I had a 4th Gen 4Runner and I was looking at getting a 5th gen, overall same vehicle with some slight upgrades.

I would still love to get a Gladiator someday but with the reasons listed above, I probably wouldn't consider it 100% till its had it mid-life update around 2025. By that time the JK will be 10 years old and will probably have more than 150K miles, which is what I am trying to squeeze out of it before I replace it.

DallasJKU said:
Interested in those knobs. Anything to get some of the chrome accents out of the Jeep. One of the reasons I love my Recon is because the AC vents are black. I like the knobs and might even look at the shift knobs as well.
Click to expand...

I'm getting the knobs today, should be a super simple install. Will post pics today when I get them in.

Got my AJT AC knobs in. Super easy install, just pull out the old ones and replace them with the new ones. Will say that they aren't as grippy as the old ones but time will tell how they hold up. 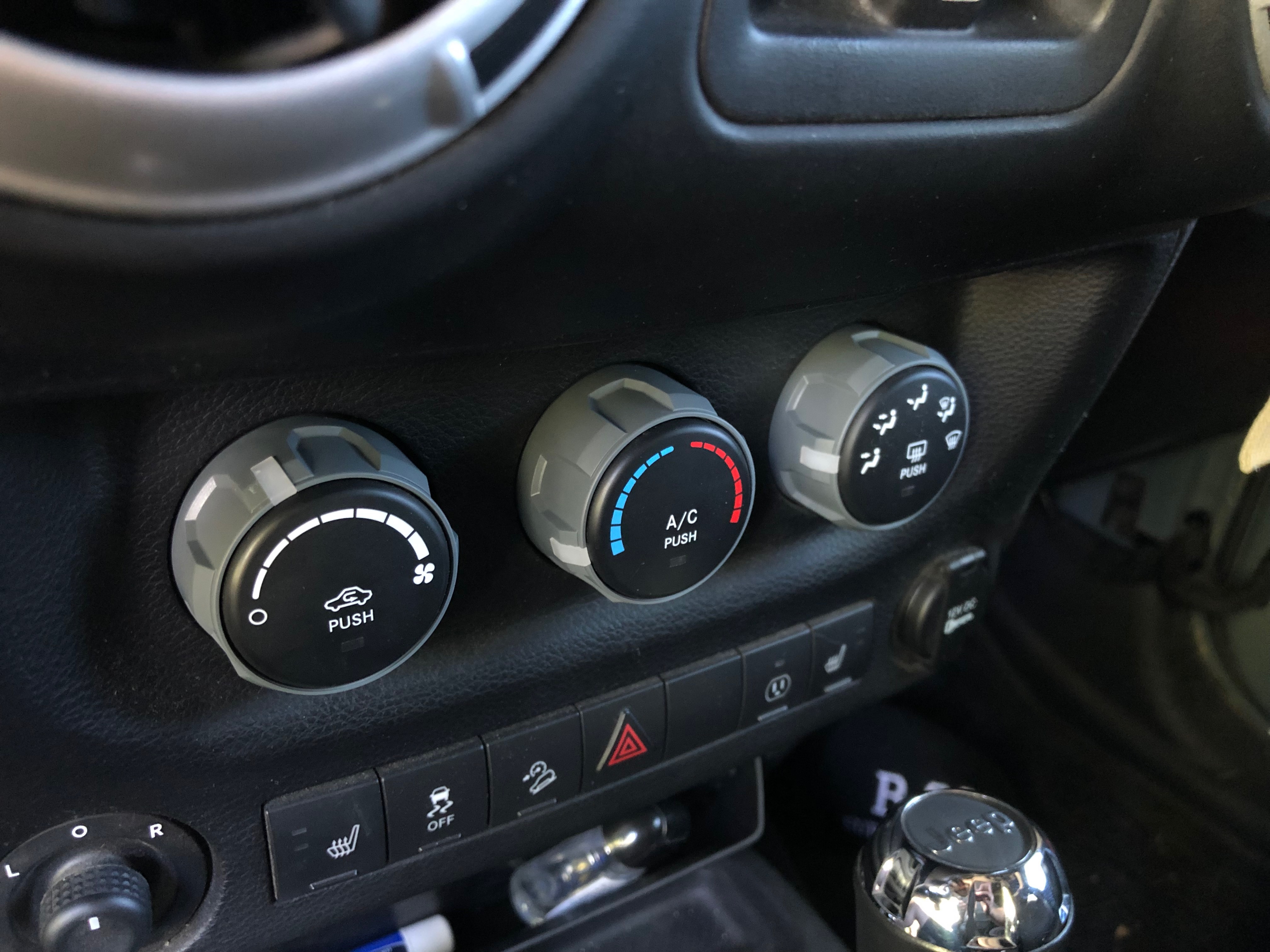 Was driving back from West Texas this past weekend and was noticing that the Jeep was getting hot again. Normally was around 200-210 on the highway at 70 but now was averaging around 222-226F which is not normal for this vehicle. Just recently it has reached 230 as a max. Now it will cool down back to around 215 but as soon as it does it goes right back to the 220s.

Decided I would replace the radiator cap because I know that they are prone to failure. Took a look and the color of the coolant I saw was the universal green, not the Mopar OAT coolant that has a kinda purple hue to it.

After doing a bit of research and consultation with several jeepers on my FB pages, I decided I need to flush out the entire system... again...

Going to the Dealership this morning to see if they can do it within a day. I absolutely despise going to dealerships but I need something like this done right and I know for a fact that the dealership with has the correct Mopar coolant on hand. Bugs me that these independent shops skimp out of this kinda stuff.


Also Jake from NMBR responded to an email he sent for departure details for the RTS. He is sending over a larger email in a few weeks but has already disclosed the departure location so we can start making accommodations.

Got the Jeep back from the dealership and drove about 60 miles on the highway to test out the coolant. Average I am getting at 70 now is around 215 again.

Also checked under the radiator cap and it is the correct coolant type.

While I was at the dealership I got the passenger side airbag recall done as well. Was pretty surprised how good the service was.

What year is it agin?
P

My 2016 JKUR is always running up into the mid 220's, then it will drop down to the low 200's and then back up again. One time, on a trail, it got up to 239! That time the needle actually moved towards "Hot", but it wasn't even close to it's limit. I am running the correct coolant.

I've brought this up with two different dealers and they both say "that's normal". I don't know. It's way hotter than any other car I've ever owned, but then all of my other cars are Hondas.

Sorry, I don't mean to hijack your thread, but I wanted you to know you are not alone with this issue.

Captain Texas said:
FINALLY got the Jeep aligned yesterday. Ever since I had the AEV lift installed about 2 months ago, it always was pulling to the right. It wasn't to the point to where it was underivable. I took it to Fredericksburg about a week ago and the wind was so bad it was pushing the Jeep around at 70mph. After that I said enough and made an appointment to get the issue fixed.

Interestingly enough, the alignment itself was pretty much perfect, not really anything was out of order except a few small things. When I was looking over the result sheet, I found that the steer ahead was WAY off before and I think that was the reason for it pulling on the road and the steering wheel being off center.

Other than the camber it drives dead straight now and I love it. i just installed the AEV 2.5" lift and I adjusted the toe 1/16.
Had the alignment checked and they said it was within spec.
Also, mine leans to the passenger side too.
But I thought this was just because of the gas tank weight and pretty normal for a JKU. 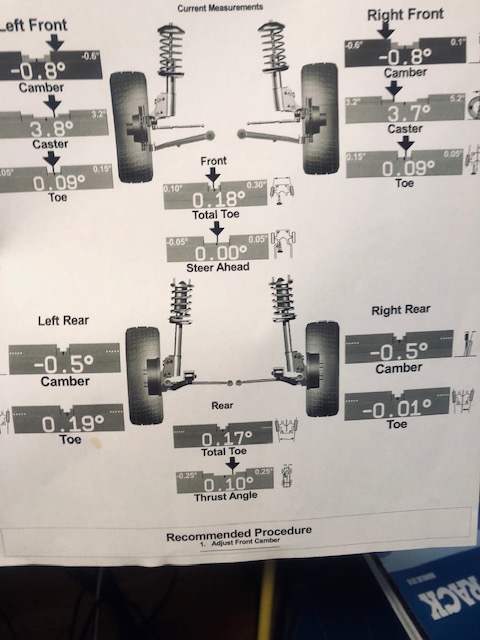 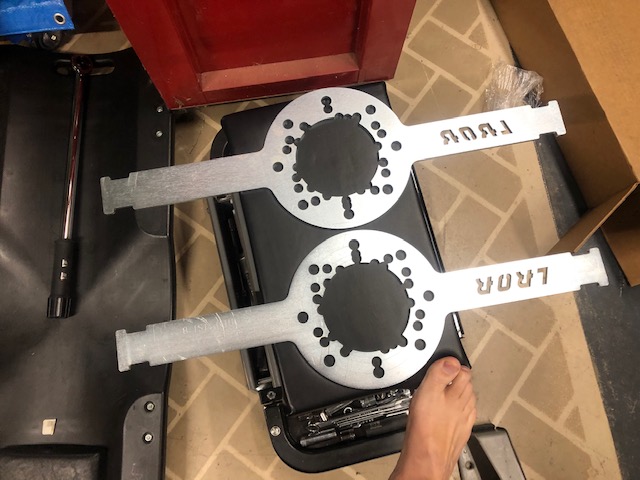 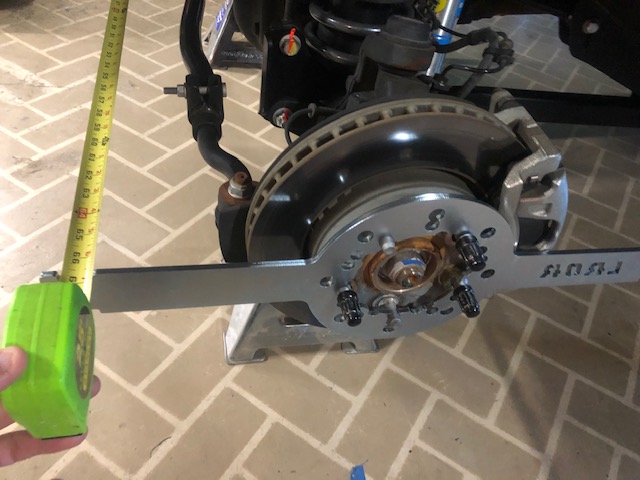 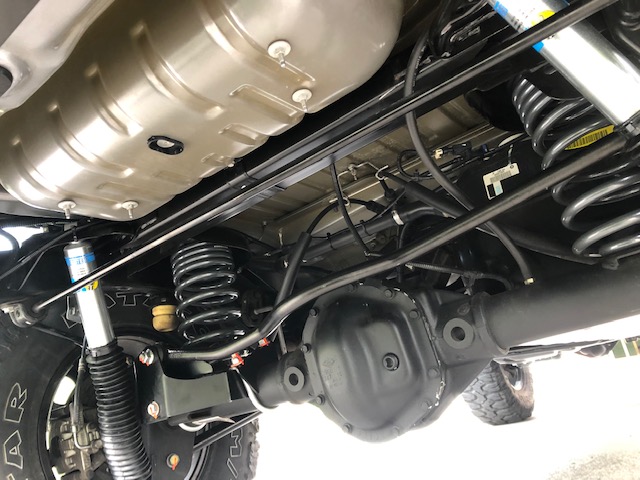 ratled said:
What year is it agin?
Click to expand...

Got the rear seats out. Tom messaged me and said that the rear cargo deck was finished but it would take about a week for the bed liner to be safe to handle. Sometime in the next few weeks, I will be heading down to central Texas to get it installed. Needless to say removing the rear seats were a pain, but I love all the room that I get from not having them. I think both seats together are about 100lbs and I dare say I could feel the weighted off the Jeep driving around. Really look forward to getting the deck installed. 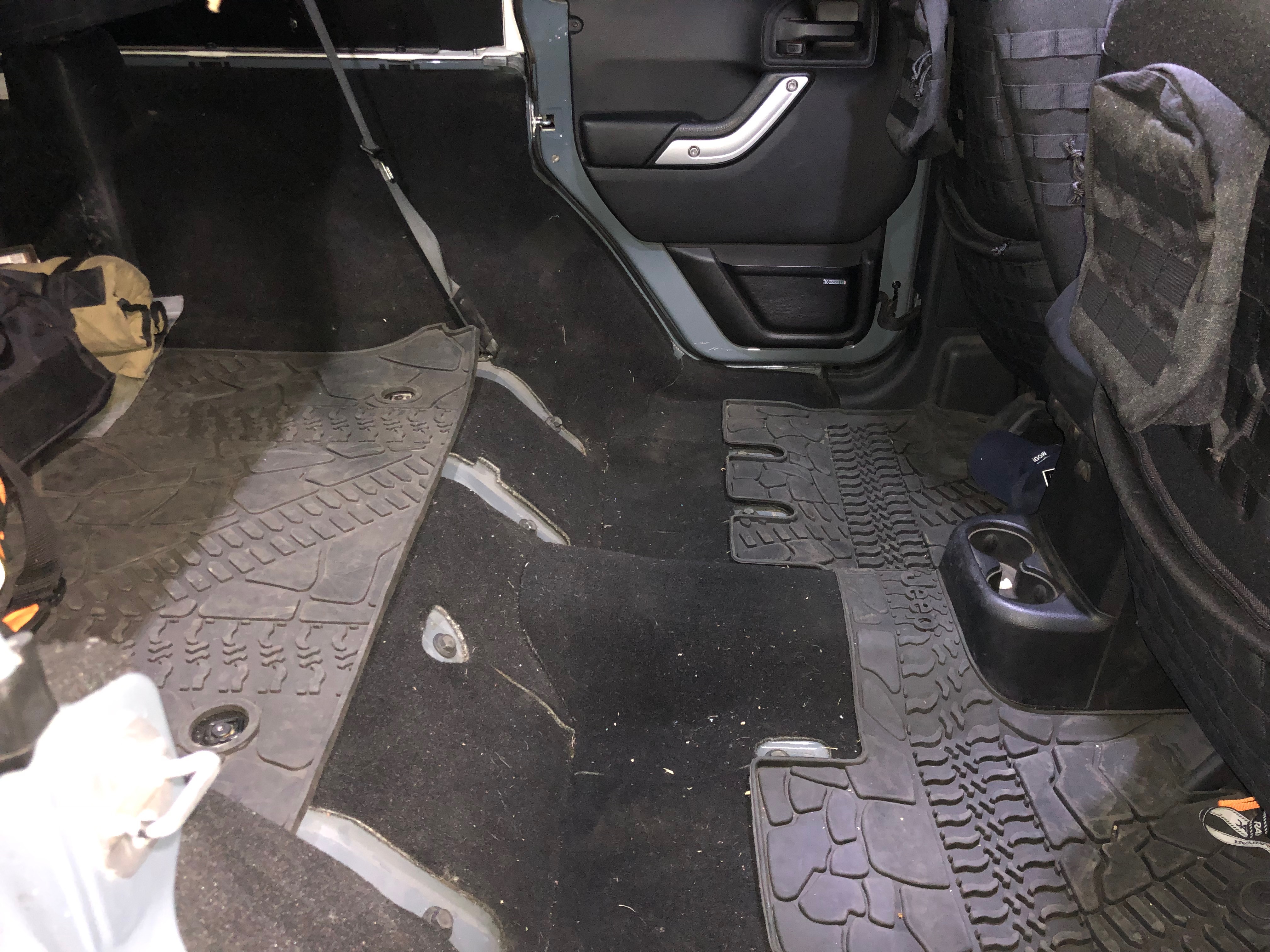 Also few small things. Got a Front Runner bottle opener for the rear cargo shelf, got some Adams Polishes and cleaned the leather and interior panels (Smells great BTW), and slowly piecing together some 67 Designs parts to mount my iPad on my Vector Dock. Also will be rewiring my sPOD so I have more commonly used accessories closer to the driver side (So I don't hit my front locker when I want driving lights by accident at night).

Still weighing in on getting the AEV 3.5". Turns out I have come across a 1999 Porsche Boxster that will be a project car so trying to determine if I want to spend more on that or on the Jeep.

What rear cargo deck are you going with??

DallasJKU said:
What rear cargo deck are you going with??
Click to expand...

Just checked them out. Seems like a nice less expensive Goose Gear type solution. I need my back seats for my dog and when we go camping we just lay an Xprite NitePad. For me, it’s comfortable enough but a flat floor would be better I think. Ah, the things I do for my dog.

DallasJKU said:
Just checked them out. Seems like a nice less expensive Goose Gear type solution. I need my back seats for my dog and when we go camping we just lay an Xprite NitePad. For me, it’s comfortable enough but a flat floor would be better I think. Ah, the things I do for my dog.
Click to expand...