Is there a way to get a gme antenna to work for gmrs in the states ?

An antenna is an antenna. If you know what it's tuned for then you can figure out if it'll work for your intended band.

Say this is a GME AE4704B as an example since it kind of looks like it.

However it might be tunable. There's various ways that could be achieved, cutting it, a screw that you turn in or out, a set screw to change the length.

Or it may have sufficient bandwidth that it could reach down. They specify it to have 2.1 dBi of gain, which implies it's a 1/4λ monopole antenna or maybe an elevated feed point 1/2λ dipole. If that's true then it'll have pretty wide bandwidth.

You'd have to check spec sheets for the antenna you're considering, ask GME or test one.
Last edited: May 4, 2020
M

Those GME antennae are nice looking and appear to be well built.

Crossing the Congo: Over Land and Water in a Hard Place
by Mike Martin, Chloe Baker, Charlie Hatch-Barnwell
From $29.92

Allstone overland said:
Is there a way to get a gme antenna to work for gmrs in the states ?View attachment 583503
Click to expand...

I guess the answer is no one knows?

MiamiC70 said:
I guess the answer is no one knows?
Click to expand...

GME will know what it's tuned for (e.g. probably Aussie UHF CB). You could ask them. Since they don't sell them directly in the U.S. it's kind of hard to know for sure.
M

DaveInDenver said:
GME will know what it's tuned for (e.g. probably Aussie UHF CB). You could ask them. Since they don't sell them directly in the U.S. it's kind of hard to know for sure.
Click to expand...

Why are there no US equivalents is my question.

MiamiC70 said:
Why are there no US equivalents is my question.
Click to expand...

No market I guess. We don't have the ubiquity of bull bars and UHF CB, the 11m U.S. CB service is a mess. Hams tend to have our own options (I drilled holes in the roof and use commercial antennas). Maybe if GMRS really grows in 4WD circles we'll see more rugged bull bar antennas, I dunno.
Last edited: May 29, 2020

I posted this question way back in 2010/2011 and got flammed for asking. I think the Aussie antennas look better. I know it’s not for everyone but I personally like the look.

Usually broken down on the side of the road

You probably could diy a good one with low loss dielectric tube (radome) around whatever antenna you like, then screw it onto a big ol' trucker spring base

You could make it as aussie / tactical / futuristic / macho / chunky / phat / fat (whatever fits your fancy) as you want it to look.

polyethylenes (LDPE, HDPE, UHMW), polypropylene, and polystyrenes are pretty good for low dielectric loss. The right length of tube at 1/8" wall is pretty much indestructible when it comes to impacts.

Speaking to what @sonoronos is talking about, it's not unusual for hams to build antennas using PVC pipes for base stations to give them rigidity.

One that's common is Ed Fong's, WB6IQN, from way back in 2003. He still builds and sells it and a couple of other variations. Dr. Fong is on the faculty of Univ. of California and teaches RF to electrical engineering students, so it's not some hacked maker thing for WiFi with unknown characteristics. It's a legitimately engineered antenna, essentially a J-pole in a tube. 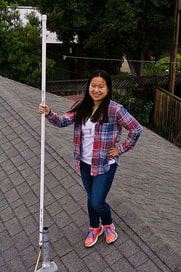 I've got one of his for GMRS, was using it in the early days of testing my GMRS repeater at home.. its not reasonable to mount that to a vehicle tho, but is a good example of what you could build.

For Mobile GMRS I use a Comet CA-2x4SR w/Addon Spring, you can get it in either NMO or UHF mount.. its just a normal 2m/70cm dual bander that's wideband enough that it still performs reasonably well for MARS/CAP modified HAM radios.. Its a half wave on 2m and two 5/8 wave phased on 70cm, about 40in tall.

The Comet CA-2x4SR is a dual band steel whip antenna that covers VHF. For GMRS-only there's no reason to use that or Ed Fong's dual band J-pole because you don't need VHF. But the principle of shoving a J-pole antenna in a PVC pipe could be adapted, which is what I suspect many of these UHF CB Aussie actually are. For 70cm a mono band J-pole would be about 21" tall, which is unsurprisingly the dimensions (580mm) of the GME referenced in the original post.
Last edited: Jun 8, 2020
You must log in or register to reply here.
Share:
Facebook Twitter Reddit Pinterest Tumblr WhatsApp Email Link
Facebook Twitter Youtube Instagram
Top