Here are some pictures from Joshua Tree National Park.
I stayed at Jumbo Rocks the first night. A little more "on the grid" than I was looking for but still pretty, pretty...pretty good.

I drove out of the park via the Berdoo Trail. It starts as a self guided geological tour and ends in about 9 miles of fairly rugged trail.

I managed to get my oil pan through this section unscathed. I know it's not very extreme by offroad standards, but being out solo with zero plan weighs on decisions like this.

At the end of the trail, I came across a group of locals shooting guns into an impromptu firing range. They were shooting from the road. It was a nerve wracking experience rolling up on them from out of nowhere but they just waved as I rolled past. Carry on fellas.
N

Ohhh maaaan, you're inn town?! Crap wish I knew, would have loved to meet up with you and go explore. Still around for a while?
S

Time for some more catch up.
After visiting some friends in Long Beach, I headed north. Here are a couple shots from Big Sur and the surrounding area. 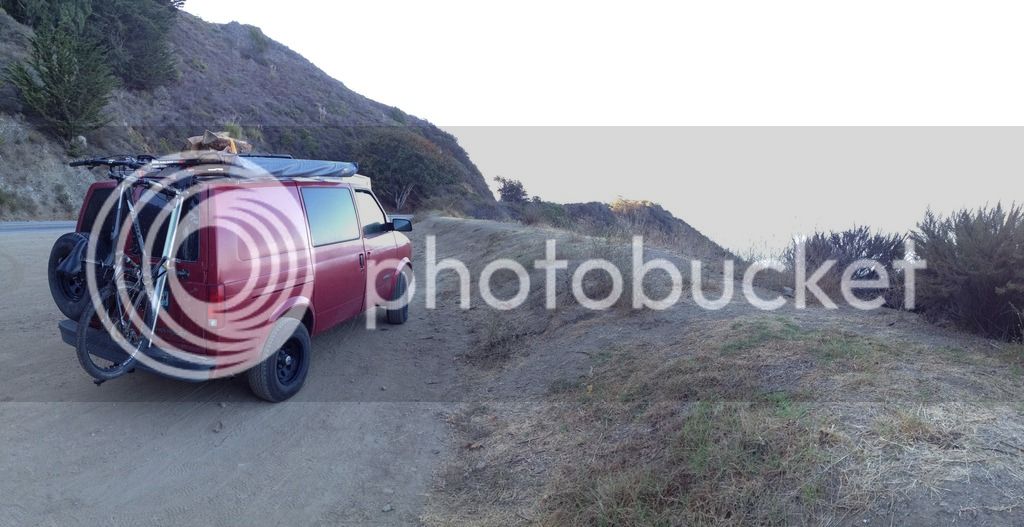 A few from Avenue of the Giants.
I had never seen giant redwoods before and it was incredible. It's hard not to feel tiny and insignificant amongst these ancient trees.

Can you see me in this picture? 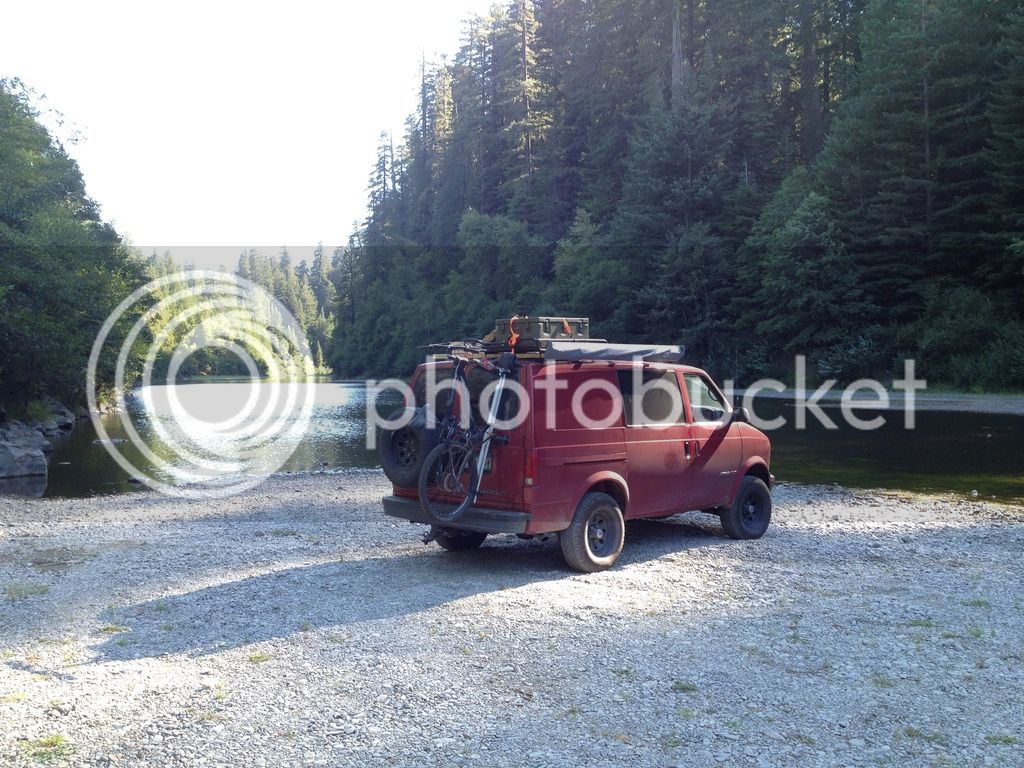 Beautiful van, looks like a very nice set up!
S

As this year's adventures are kicking off, I realize that I am WAY behind on this thread. No sense in posting anything new until I catch up. Here we go...
Naturally, you'll have to cross a bridge or two.

Unfortunately most great views are obstructed by tourists. Or..."Bros".

As I said, a lot of time is elapsing during this thread. Lets skip ahead. I spend a couple more days around Lake Tahoe and the surrounding area. This dramatic sunset was captured on the south end of the lake.

After my time around Tahoe, I moved North. I stayed on the bluffs near Klamath CA. Grey Whales were surfacing periodically and sea lions were on standby looking for salmon at the mouth.

I spent the night painting this number plate I found on the Berdoo Trail for a friend of mine. He has a tired old Yamaha MX175 that I think it would be perfect for.

I spent some time passing through Oregon. Did some camping and moto-touring in and around Crater Lake National Park.

I like to think this is an old out house. 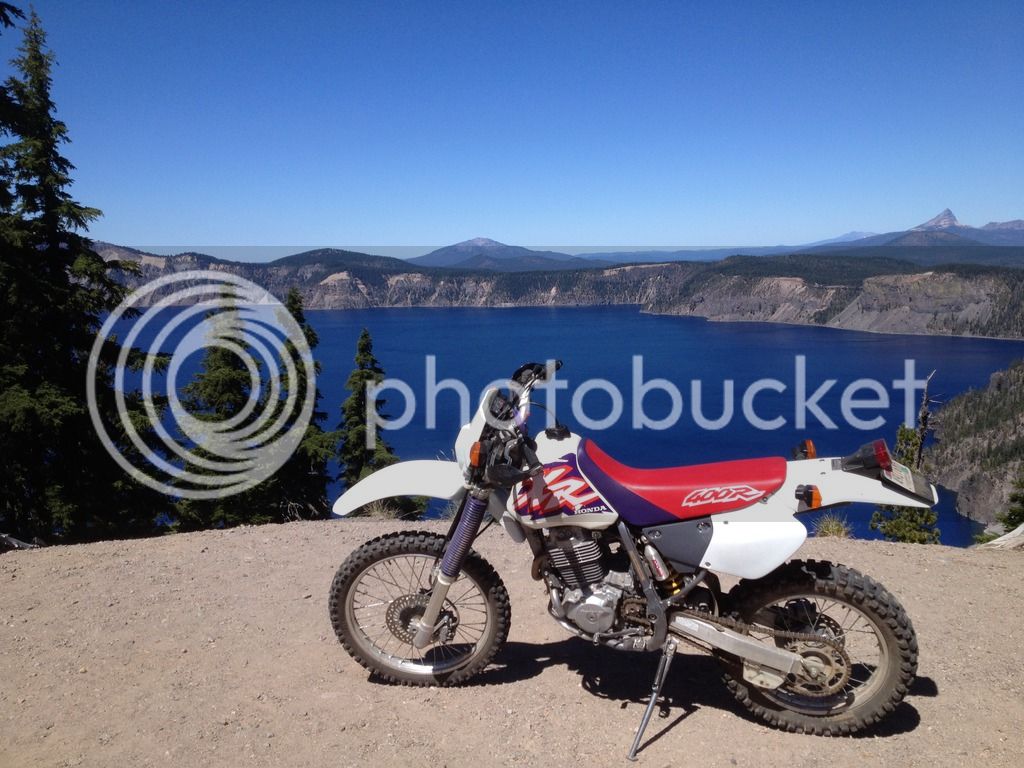 I also spent some time exploring the Deschutes National Forest outside of Bend but not before having some bicycle maintenance done. I had a significant fork seal leak that was dripping down my rear door. I took it in to the nice folks at Sunnyside Sports in Bend and explained my situation. They put me ahead of all the other bikes in line and swapped my seal, refilled the fork and had me on my way in short order. I couldn't thank them enough for getting me in that late on a Friday. They also pointed me in the direction of some great trails.

I camped near Phil's Trail System and hit the trails in the morning.

Got some significant "pin striping" exploring Deschutes. One "road" I was on kept getting increasingly narrow...or decreasingly wide...whichever you'd like.

Eventually I found somewhat of a main road and came across another lifted Astro. Anybody know who this is?

I spent some time at Wanoga Sno-Park. As always...winging it.
Set out solo with a crappy trail map. I hit Tiddlywinks, Tylers, Kiwa Butte, Funner, and maybe one or two more. I felt rushed by the sun and not knowing where I was. I would love to go back and spend a weekend there. Awesome trails.
The "Moon Dust" in Bend is no joke.
Only picture I took was in the empty parking lot.

Near dusk, I found an awesome spot in the Deschutes National Forest. Sunset on one side. The lights of Bend on the other.

Just one AWESOME Thread !!!
Thank you sooooo much for sharing !!!!
C

Thanks for sharing. I have picts of my kids skipping rocks on the same exact river bar. We did 6 days base camped in the Avenue of the giants. Then did day trips. That exact river bar access was our daily stop with the dog and kids. Did you visit Gold Bluffs and fern canyon? That was cool!
Fort Jones is east up the Klamath. Use to backcountry pack 1-2 weeks in the Marble Mts. I highly recommend Deep lake very long fast one day hike in. Or rookie two day effort.

Yep this thread pushed me over the edge in buying my van (Safari) Now to get it reliable.
N

Hey it's nonhog, welcome here too!

SHARKFOX- Been a while buddy, itching for some new adventures and stories!
S