Anyone try and use HF on their journeys? I installed an HF capable radio so I figured I would give it a try. Made a dipole out of a couple of HAM sticks and put it up in the air with surplus camo masting poles.

It's a bit of a pain to setup but was a fun experiment.

Anyone try sending SMS or email with HF? Experience with WinLink?

I had my FT-857 mounted in my truck with a ATAS-120 for maybe two years and carried a FT-817 for portable work. But working HF mobile isn't for me so sold the 817 and went to an 857 portable station. I haven't been dragging it along lately, though. When I do I run a dipole raised on fiberglass military poles with a tuner (I have an AH-4 and a LDG Z-11) or I put the ATAS on top and just use it as a very inefficient (although supremely convenient band nimble) vertical with the guy lines being sloping ground wires. The problem is I use an unwieldy tripod. It and all the other stuff consumes space, so I don't bring my HF radio along normally and only for Field Day or something specifically about ham radio. I need to reorganize and start doing it more.
Last edited: Sep 15, 2019
F

I used to run 80-1296 in my old truck. Now just VHF/UHF. Life got in the way of putting HF back in full time. I gotta be honest, 40m mobile will out do 2m Mobile for making random contacts off the beaten path. There are some great mobile nets on the Eastern Seaboard and Gulf Coast that help.

Agreed, it is very cumbersome to do. Lugging around a bunch of antenna bits. It's kinda something you want to do, rather than need to do.

GasCan said:
Agreed, it is very cumbersome to do. Lugging around a bunch of antenna bits. It's kinda something you want to do, rather than need to do.

Just mount an HF to the truck and it works well. I had. Tarheel 75 but will probably go with something more robust. My hold up is having cash for a bumper as I think I will upgrade the rear bumper to metal and attach an antenna there. The trailer hitch bumper seems a bit to low to me.

I have HF in my Jeep for mobile ops, but at camp I put up a dipole or two (shared feed point) or soon to be linked dipole. I used a mast but could also easily throw a rope in a tree for the feed point.
I also have extension cables for the control head and mic so I can sit at a table outside the Jeep under the "awning". Also used it for Field day this year.

Unless you can get a dipole 35 feet or higher don't count on much DX. Think NVIS

Used to run HF mobile back in the day. Had some great times on 10 meters when the band was wide open. Do not use now however. Have fun.

Not so sure what everyone has against the ATAS 120. Mine is on a fender mount, and works very well.

Not so sure what everyone has against the ATAS 120. Mine is on a fender mount, and works very well.
Click to expand...

I like my ATAS-120. My only complaint is that mechanically it doesn't seem like the most robust construction but I also can't say I've personally had any problems with mine either. It will be a low-Q antenna so inefficient but that's theory and any screwdriver is going to be a compromise for size and mobility and that's more than offset IMO by the convenience of seamlessly working with Yaesu radios.
U 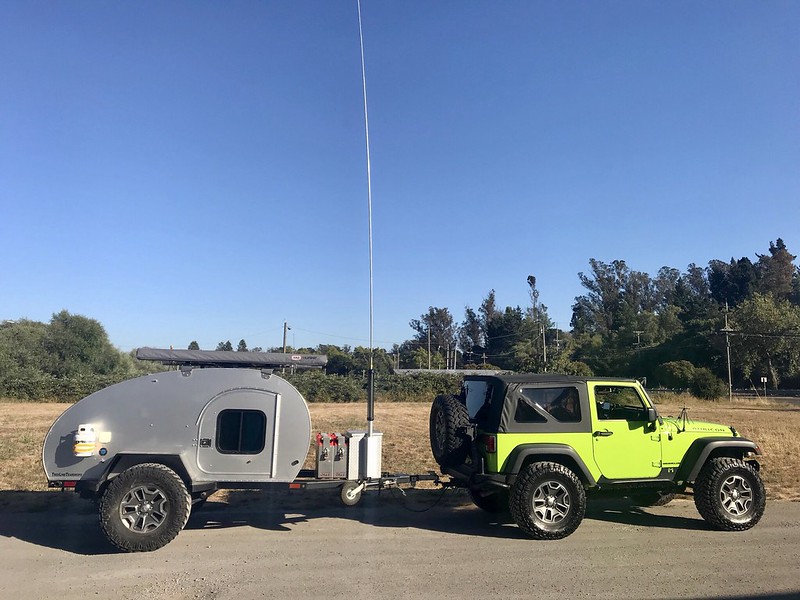 It is a Tarheel 100 bolted to the tool box using Tarheel's mount with a custom bent aluminum guard to protect the coil. The box is grounded to the frame through the powder coat. The whip is a MFJ 1979. The whip is long enough to be a real 1/4wave vertical groundplane on 20 meters, and 1/8 wave coil-shortened vertical on 80 meters.

The whip is collapsed, removed, and stowed while driving. I also have a bunch of groundplane wires that I can deploy around the antenna for better efficiency, but I'm generally too lazy to put them out.

The antenna is on the opposite side of the tool box that contains the solar charge controller to cut down on noise.
It works much better then a much more shortened HF antenna, and deploys in a matter of minutes.

Prior to this setup, I used a inverted V on a tripod. That worked very well also, but it took me an hour to put it up and take it down. 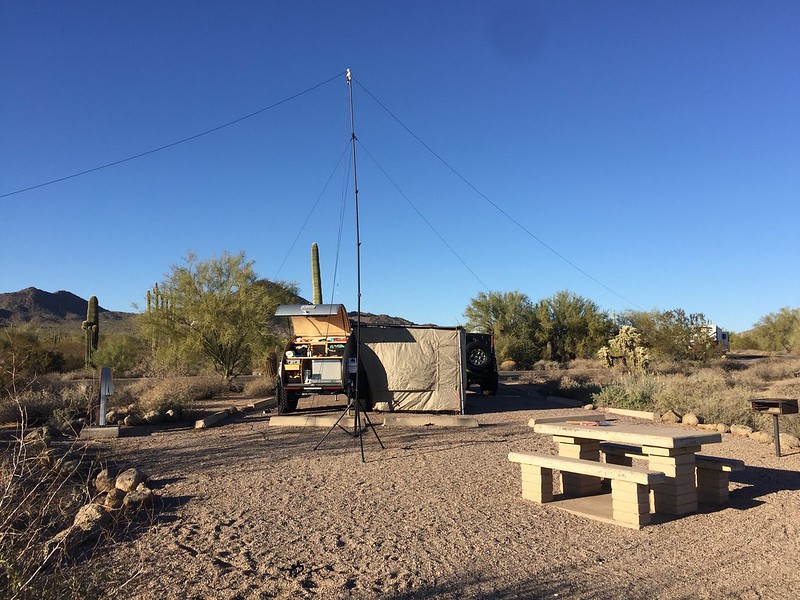 I live in an urban area and very much appreciate the S0 noise floor that I get while camping.

Running a Yaesu FT-891 with an ATAS-120. The antenna mounts to a lip mount located on the hood. Easily screws off if I'm hitting a trail with a lot of brush, it's definitely not the most low-profile antenna, but it's been great for making random contacts on trips. I also make it a point to check into the SOUTHCARS net when possible.