Any limit to how fast lithium ion batteries charge?

I've done some research and one of the perks I've found to lithium ion batteries is apparently they can be charged extremely fast especially with multiple batteries. Basically, I was just wondering... let's say you have 1000ah of lithium ion batteries (5x200ah). The batteries are drained down to 200ah (20%). If you put 400 amps into them steady (let's say exactly 400 amps current), around how long would they take to charge? I know amps are not the same as "amp hours". But could one assume it would take around 2 hours, or is it impossible to know?

I have see people put 250 amps into them, but I am not sure of their max acceptance rate. 0.3c? not sure. I think putting more than 250 amps back in might be a real challenge.

If you don't want to blow up your own battery, watch this: http://www.pbs.org/wgbh/nova/tech/super-battery.html

Speaking from great interest and no practical experience, I have been warned to make sure that my alternator has good overheat protection when using a lithium iron battery as the charge rate will not drop as it does with lead acid. That is, the alternator risks to run flat out, longer.

Into Africa
by Sam Manicom
From $24.6

We have 4x 100Ah batteries from http://www.elitepowersolutions.com/ through Larry at Starlight Solar http://www.starlightsolar.com/Home.html, and 640W solar. Installed ourselves to save cost and also claimed the 30% fed tax credit.
I don't have the charge amps off the top of my head, but these 2 sites should get you started.
Also, these batts have nothing to do with Boeing or Samsung disasters.

DiploStrat said:
If you don't want to blow up your own battery, watch this: http://www.pbs.org/wgbh/nova/tech/super-battery.html

Speaking from great interest and no practical experience, I have been warned to make sure that my alternator has good overheat protection when using a lithium iron battery as the charge rate will not drop as it does with lead acid. That is, the alternator risks to run flat out, longer.
Click to expand...

I don't think I have ever heard the term, what is alternator 'over heat protection'? I understand the concept and how the charge profile of the battery could drive the necessity but what and how are alternators protected from overheat?

Its a regulated voltage control system.

Some vehicles have it built into the charging system, using a battery temp sensor.
R

For most of the prismatic LiFePO4 used in lead acid replacement type packs a charge rate of 0.5C is fine and for some it can be as high as 1C. What that means is you can charge the battery at a current of 50 to 200% of its rated capacity. So in the example above you could safely put between 500 - 1000A into the pack. The big caveat is that you need to check with YOUR specific cell manufacturer.

Rando said:
For most of the prismatic LiFePO4 used in lead acid replacement type packs a charge rate of 0.5C is fine and for some it can be as high as 1C. What that means is you can charge the battery at a current of 50 to 200% of its rated capacity. So in the example above you could safely put between 500 - 1000A into the pack. The big caveat is that you need to check with YOUR specific cell manufacturer.
Click to expand...

For longevity I've read .5C is a good standard for regular use, but if you're in a pinch 1C is acceptable.
Z

Just because in theory lithium cells can be charged very fast doesn't mean all batteries can be done at the same rates. It's actually better to fast charge than to slow charge (and trickle charging isn't possible with lithium) but only up to a point.

Check with your manufacturer.

The exact rates the battery wants will depend on chemistry, temperature (ambient and cell), the value of short circuit PTC they use, construction. If you exceed the cell's critical lithiation rate you risk stress that can permanently damage the electrodes. So a good manufacturer will know their characteristics and build a battery that protects itself from damage and the potential thermal instability (boom!).

The charge mechanism is different than lead-acid, which is self regulating and voltage driven. You know state of charge and condition based on terminal voltage and the only risk is forcing too much current into the battery and the generated heat causing the electrolyte to boil. It's actually difficult to damage a lead-acid and even more difficult to create a dangerous situation (which is mainly boiling and venting hydrogen gas).

Lithium is current driven, it will just keep trying to charge even beyond the point where it's fully charged so you have to watch the current to know it's charging state and when to stop. Terminal voltage isn't a conclusive indication of state of charge unless you charge at very slow rates (typically a rate around 20% capacity). It's comparatively difficult to damage lithium batteries but much easier to create a dangerous situation because the cells themselves can become unstable.

Your charger needs to be matched to capacity and it's best to have a fail safe time-out. This is why batteries intended to drop in for automative lead-acid have a battery manager built-in. They deal with all of this based on a set of assumptions about the vehicle charging system, voltage, available current, etc. When you use a lithium battery stand-alone you have to provide the right charge profile and safety parameters for it. There will be a range of currents that will overlap based on capacity, e.g. a 100A-hr lithium at 0.5C over say 0°C to 40°C is generally going to be safe for most of them so you're not hemmed to a single charger/battery necessarily.

But check with your manufacturer.
Last edited: Feb 9, 2017

Some vehicles have it built into the charging system, using a battery temp sensor.
Click to expand...

Not exactly. Battery temp sensor is for adjusting charge voltage based on battery temp.

Alternators get hot, which is why they all have cooling fans. Guys who build high output alternators really have to think about how to keep them cool.

Sterling's aftermarket regulator has both: 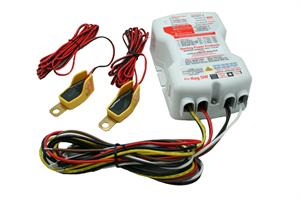 
So what Diplostrat was saying, is that pumping a heavy amp load to charge a battery can overheat the alternator, and this is more likely to happen with lithium type batteries. Especially if the charging system does not have the ability to monitor alternator temp and adjust accordingly.

Yes, some systems utilize both. But from a safety standing, I see battery monitors as being priority.

Pretty much my point, and why I responded specifically about battery temp.

All that said, this simply supports the reason to properly design the system as a whole.

Some really good info here thanks for the replies. So even assuming 0.5c (the lowest number) that would still mean a 200ah lithium ion battery could be charged at 100a/hr. So if a camper had 5x200 then it could be charged to a theoretical maximum of 500 amps.

My next question would be how best to hook up a dual alternator system, like let's say the factory 445 amp dual alternator in the Dodge 5500, to a 1000ah lithium ion battery bank. Let's assume I used a fancy complete kit, like the one available from www.amsolar.com which comes with a full BMS system, if I were rich....

I would need to run, I assume, 4/0 gauge wire to the front of the truck? Or I could run 2x2/0 gauge? Then assuming the truck had an overheat system already built-in for the alternators, what else would I need? Would I need a blue sea 500a ACR? a fuse obviously in-line somewhere? Basically the goal here would be to charge the 1000ah battery bank as fast as possible using an idling truck because the longer a truck idles the worse off it would be.

Would anyone else be concerned here? Using Onderdonk for 1 AWG at ambient of 25°C for 7200 seconds gives a 150°C (EPDM melt insulation) temperature of 71A. Obviously this assumes no cooling, but ~250A on each of parallel conductors for an hour will probably heat them up pretty significantly. An hour at 0.5C is also a pretty stiff assumption.

I know the rule-of-thumb chassis wiring value for a 1 AWG is 180A (the chart uses PVC, so 90°C I think). So just wondering aloud.

I've always used bus bars when carrying such large currents continuously. To me continuous is more than 100 seconds but I do admit to fudging a lot for winch cables, I think I assumed stalled motor current for 600 seconds. For 250A I'd probably use at least a 1" x 1/8" copper bar. This would be roughly equivalent to a 2/0 AWG wire but being solid copper and uninsulated the Onderdonk calculation with a melt of 1083°C so it can carry that current for an hour without cooling. But that would be for about a 75°C rise IIRC, so long before the copper mechanically would be a concern. I'm probably just being too conservative.
Last edited: Feb 10, 2017

Most alternators are rated peak/continuous, so a "100a" alternator is usually only capable of around 80a continuous without overheating.

Is the super dual alternator kit rated 445 continuous, or peak?

Will it do it at idle? Or does it need/include a high idle kit as well?

Would the BMS of the AMSolar battery pack actually allow 450 amps to flow through it?