It’s been four months since she joined the family. About time I got around to sending out the birth announcement.


When I picked her up she had just over 8k miles on the clock. And by the looks of it, she spent those miles stuck in bumper to bumper traffic in Los Angeles. Like many of her siblings around here, I’m pretty sure she was never taken to the country to run wild.

My original plan was a 2 door. But during the obsessive image gathering stage pre purchase, stories of Dan Grec and Chris from Venture4wd started to swing me towards the 4 door. More specifically a 4 door with an Ursa Minor top.

Here she was day one: 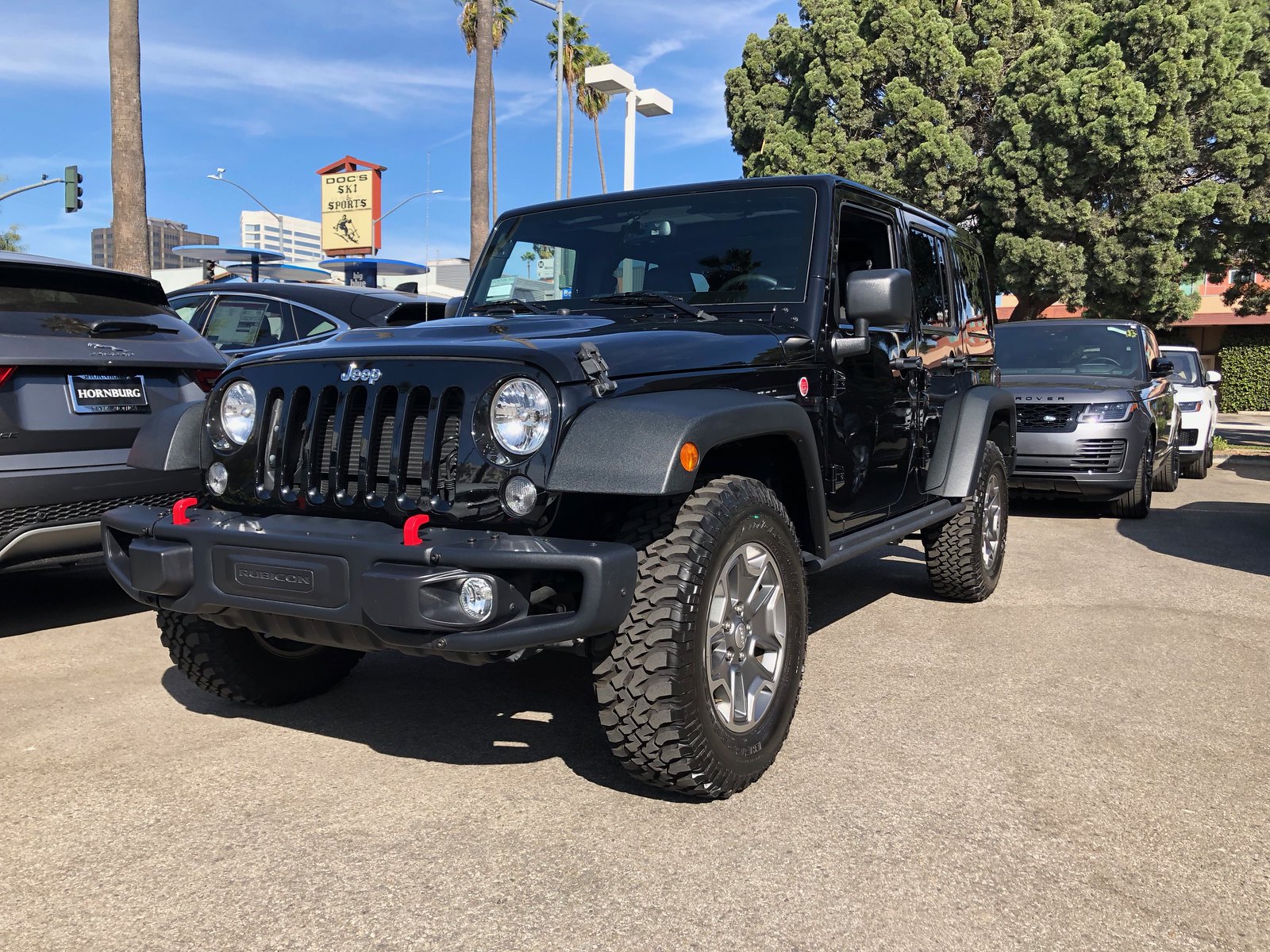 Fifteen days later - after a topless drive down in the rain - she was at Ursa Minor Vehicles in San Diego getting the house installed: 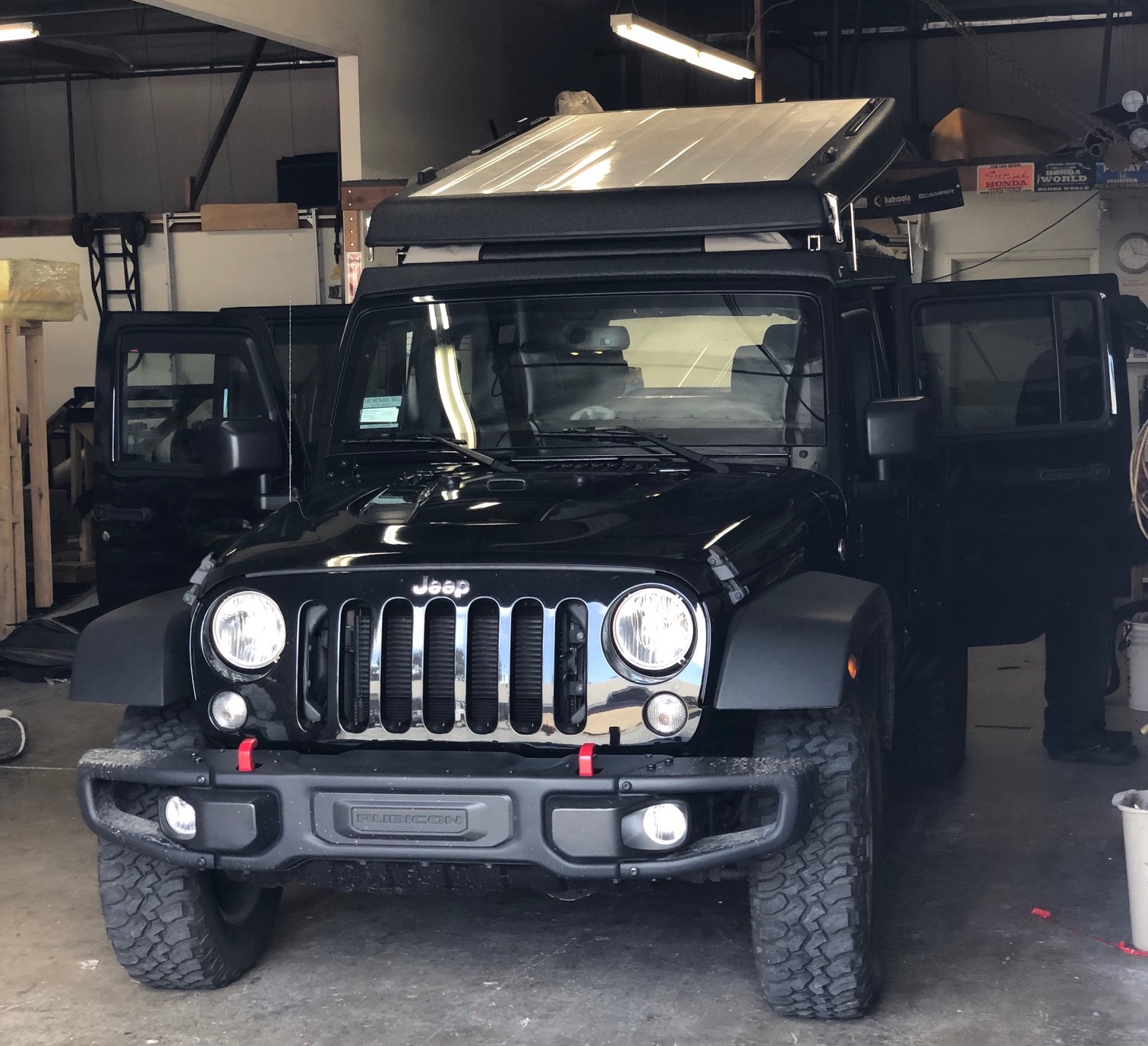 Somewhere in between I managed to swear my way through the installation of the Alpine ILX-107. Wireless CarPlay is freakin awesome. Such a little detail, but being able to jump in the Jeep and have everything pick up where you left off is brilliant. had a temp solution for wireless charging as well until it cacked out. Have a fairly slick [if I say so myself] solution designed. More on this later.. 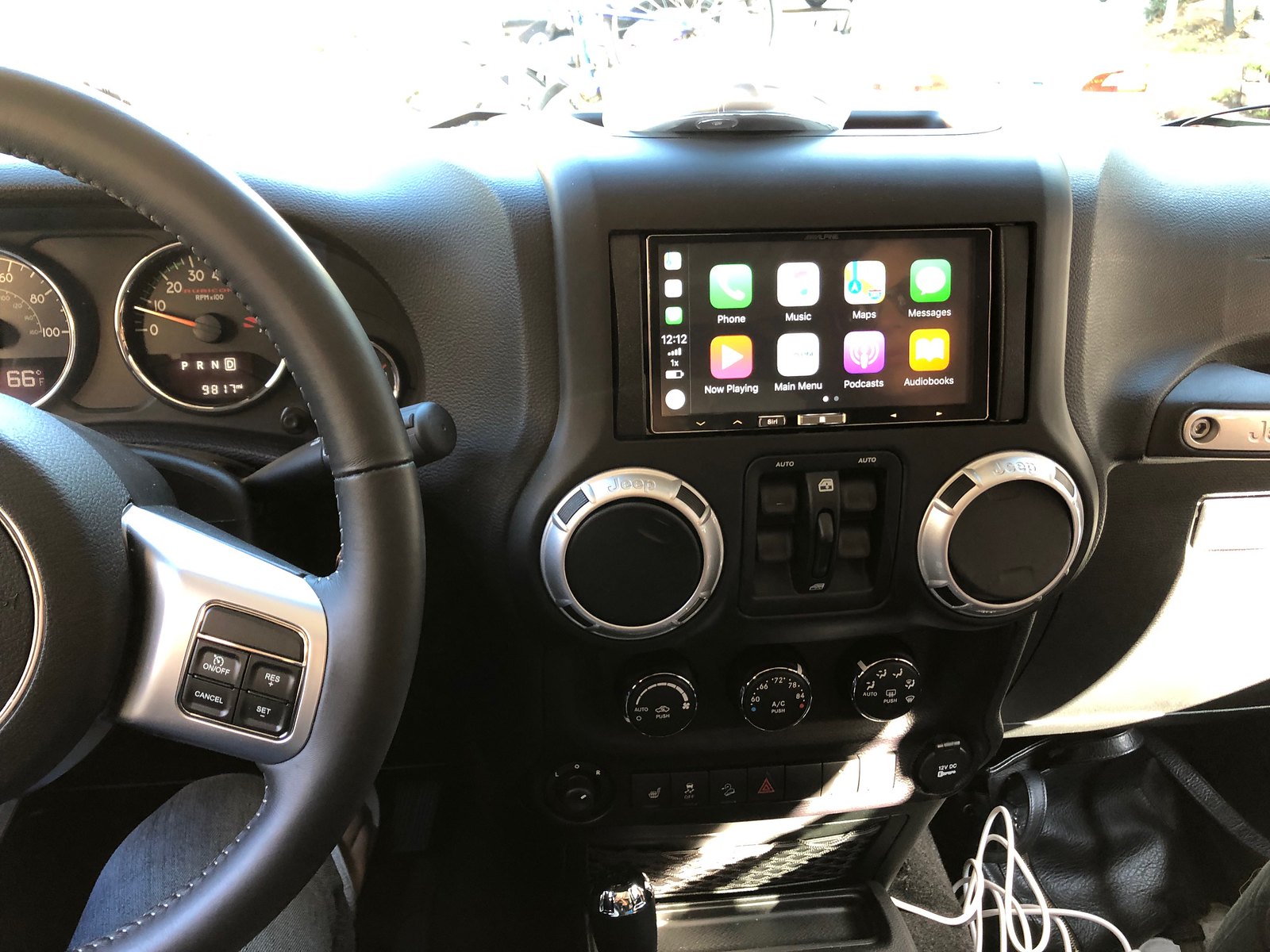 After months and months of planning, and two weeks of ownership, Moose was finally coming into shape. As the sun set, I left Ursa Minor and booked it to Joshua Tree to have the first night’s sleep: 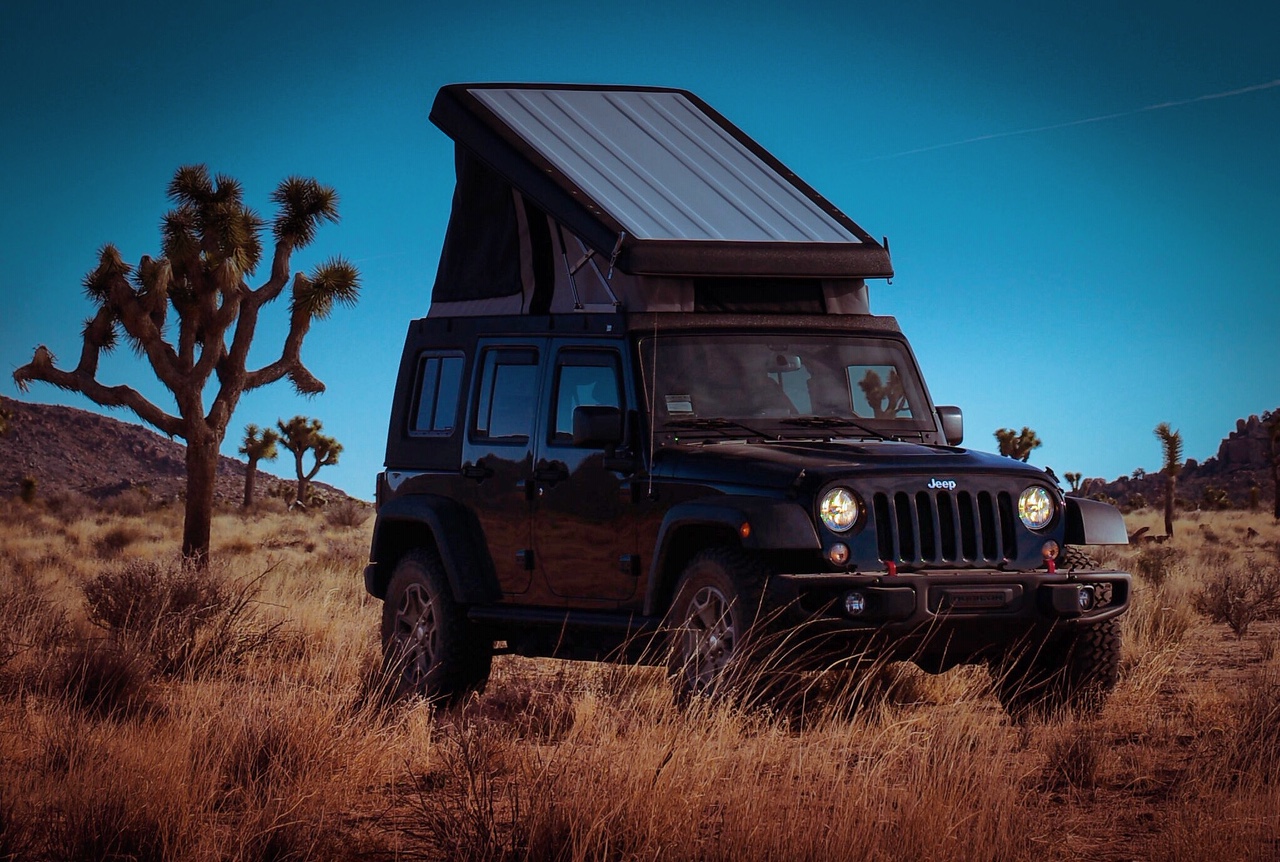 That first sleep was amazing. Anyone’s who’s on the fence, just go for it... being able to setup camp in 30 seconds is worth every penny.

Met up with a buddy who knew JT well, and we spent the weekend exploring some trails, and having a bit of fun in dirt. Who says a camper can’t let loose? 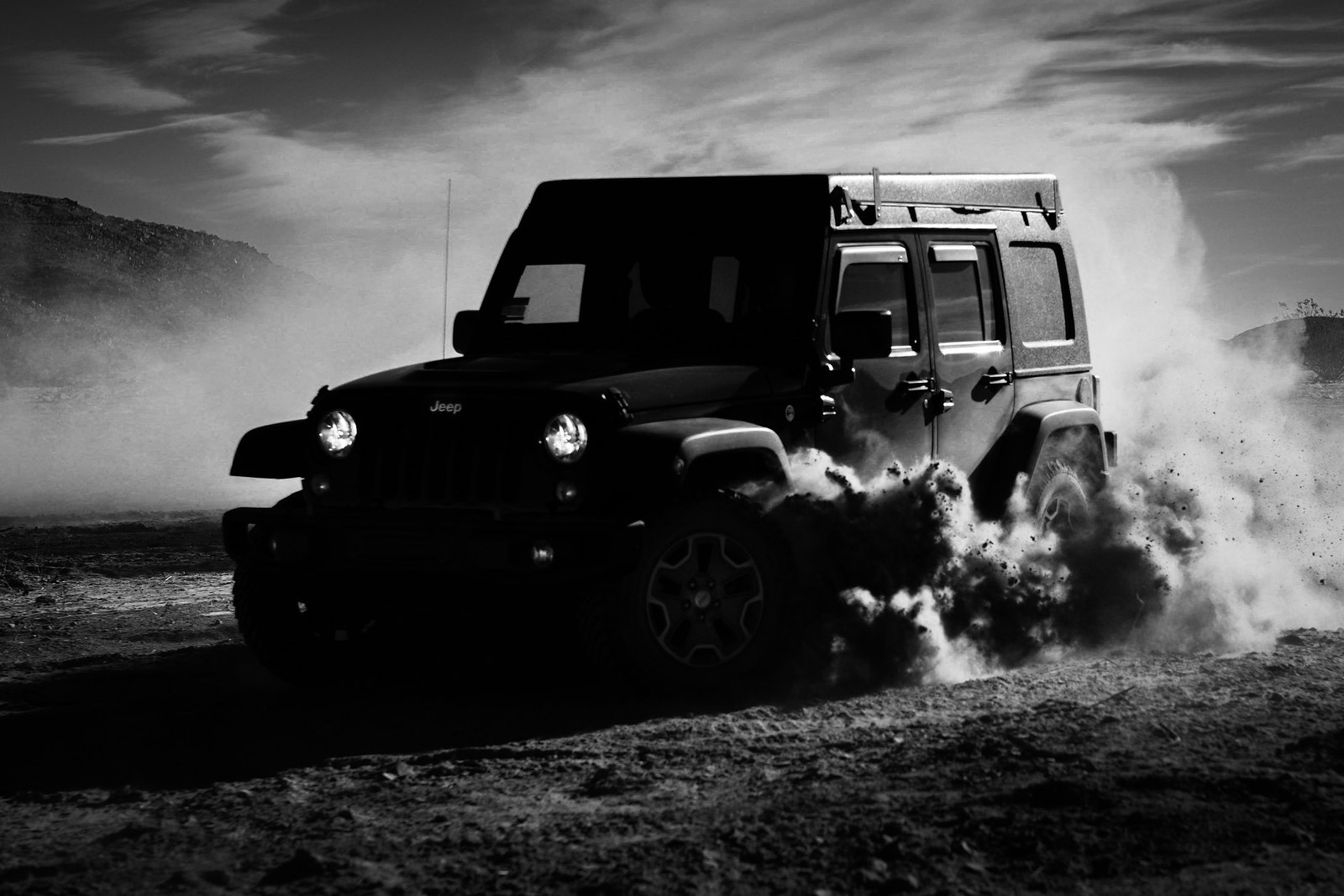 From there a trip to Alabama Hills - about 3.5 hours north of LA, at the base of the Sierras. Cold as F. But stunning. Perhaps my favorite part of California I’ve found so far. 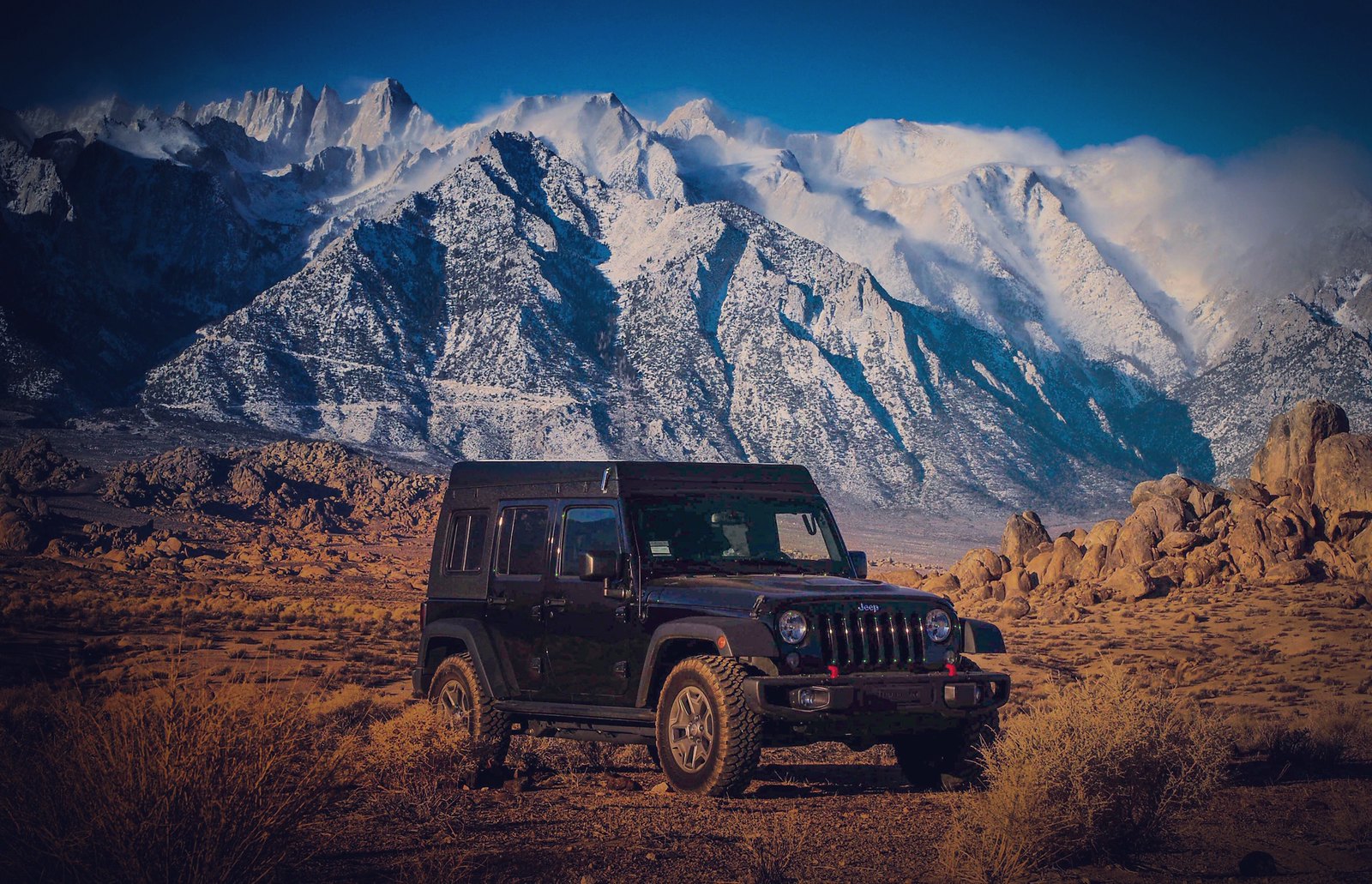 At this point Jeep fever had fully caught on. Ever since there has always been a dozen tabs open on the browser, taunting me to spend more money. With a bigger trip planned a couple months down the road, I started to narrow down my choices.

Forever on my shopping list - as far back as my days owning a Defender once upon a time in Australia - was a 270’ awning. Was torn over the options available, until a post from Sema put things in focus. Enter the Rhino Rack “Compact” BatWing: 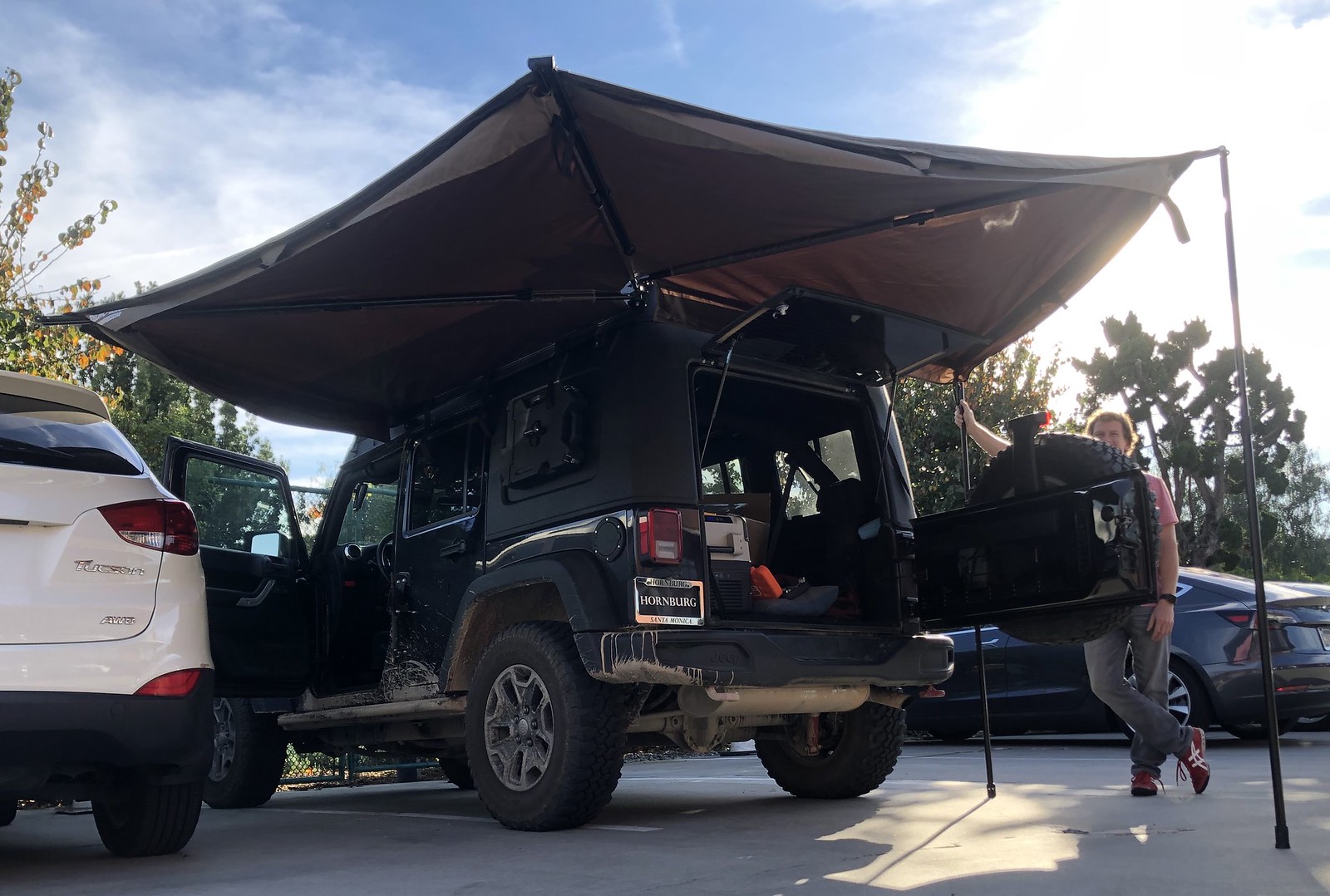 This was a PAIN in the ******** to install. Mostly because I’m an idiot and didn’t plan in advance. First off I never bothered getting Ursa Minor to install the proper brackets ahead of time because I was still undecided. So this meant installing those myself once the top was already mounted. PITA. I also realized once everything was mounted that the bolts were too long - stopping the top from opening. And since that bastard is way too heavy to remove easily by one person, I spend a Saturday hanging off the Jeep with a hacksaw and a lot less skin on the knuckles.

However... it was all worth it. The ease of setup matches the top perfectly. Setting up camp is a breeze.

Next up was new suspension and shoes. I have lots of respect for all you maniacs who climb the climbiest rocks, but I was honest with where I was headed. For me it’s all about exploring the great outdoors. Without the constant threat of ripping apart my undercarriage.

Eventually settled on the AEV 2.5” lift, with matching AEV saltas, wrapped in BFG K02s (34-10.5-17). The picture really doesn’t do it justice. Looks much nicer in person. At least to this person. Handling / noise were improved greatly. So long knobby mud tires. 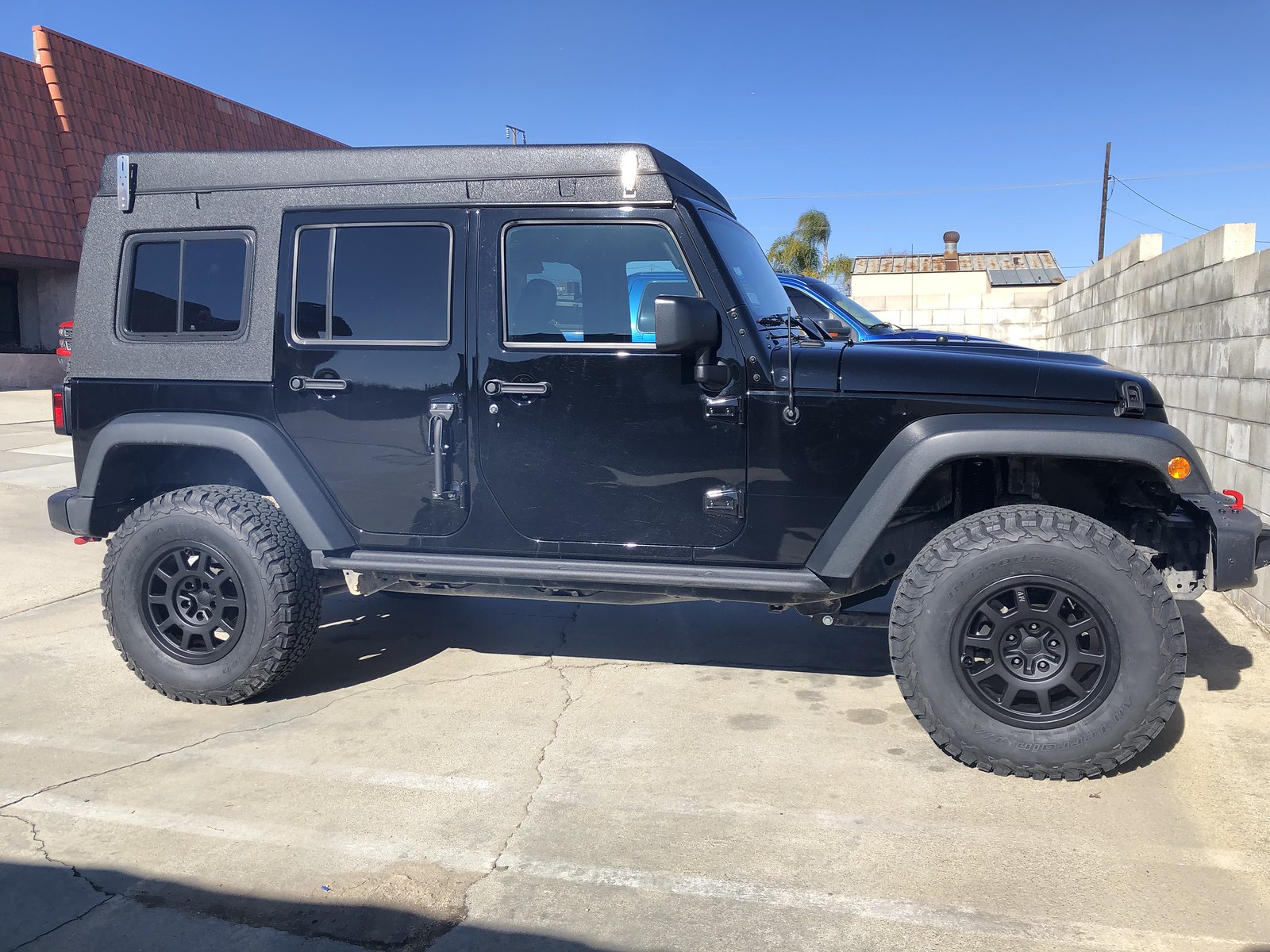 Managed to find a shop who could install the suspension the day before we set off on a trip that went from LA - Lone Pine - Death Valley - Antelope Canyon - Grand Canyon - Mojave - and back.

First stop was back at Alabama Hills. Woke up to a pretty sight. Assured my buddy this was bound to be the coldest part of the trip - considering this was up in the mountains. I couldn’t have been more full of sh... 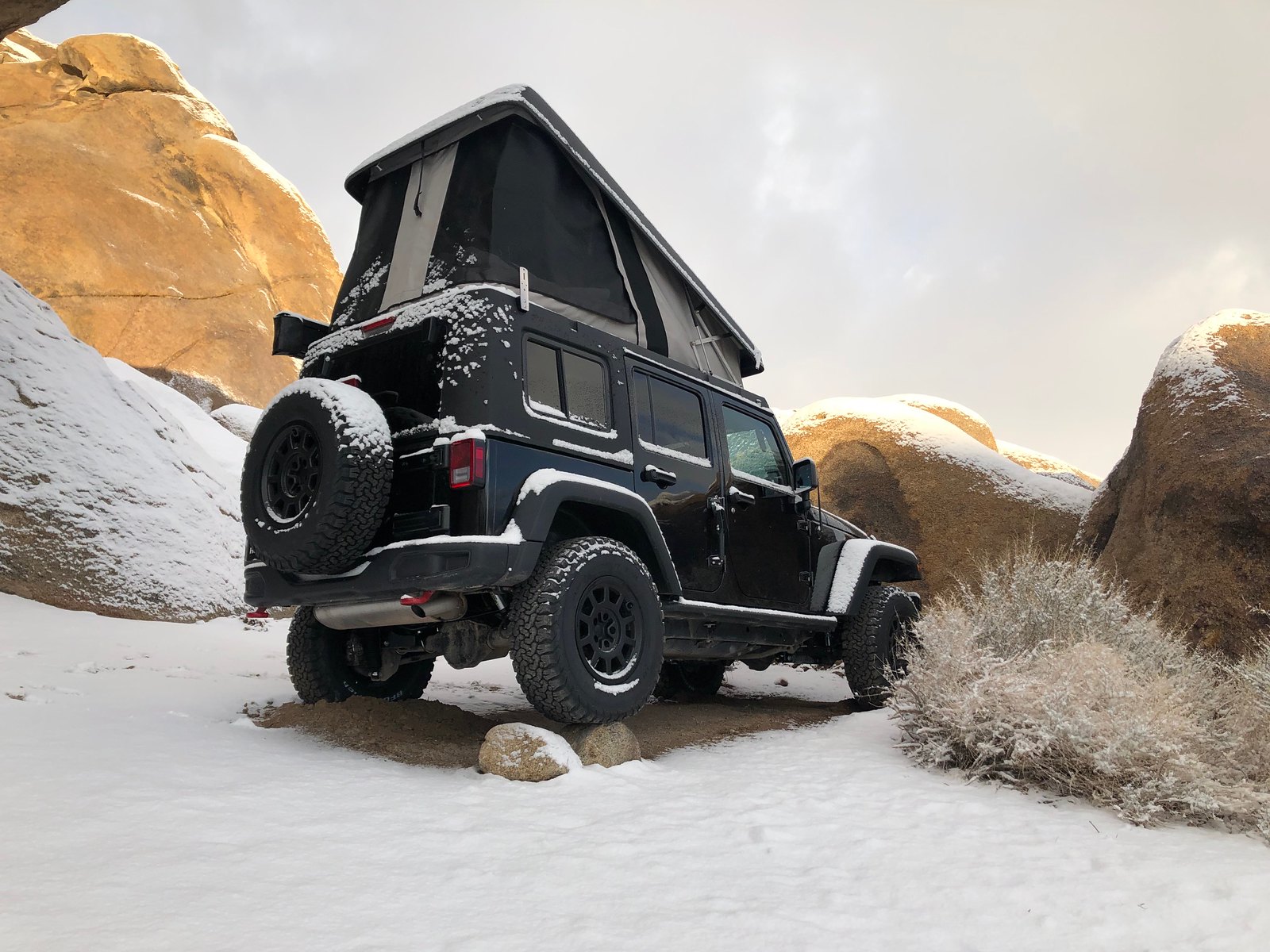 The final major piece was the Morryde camp kitchen, paired with the Dometic CFX35W.

Here a couple Canadians seen in their natural habitat - somewhere near Kanab Utah. Hard to see, but there’s a hockey game playing on the iPad, while 3 inches of snow would dump on the awning as we cooked. Awesome. 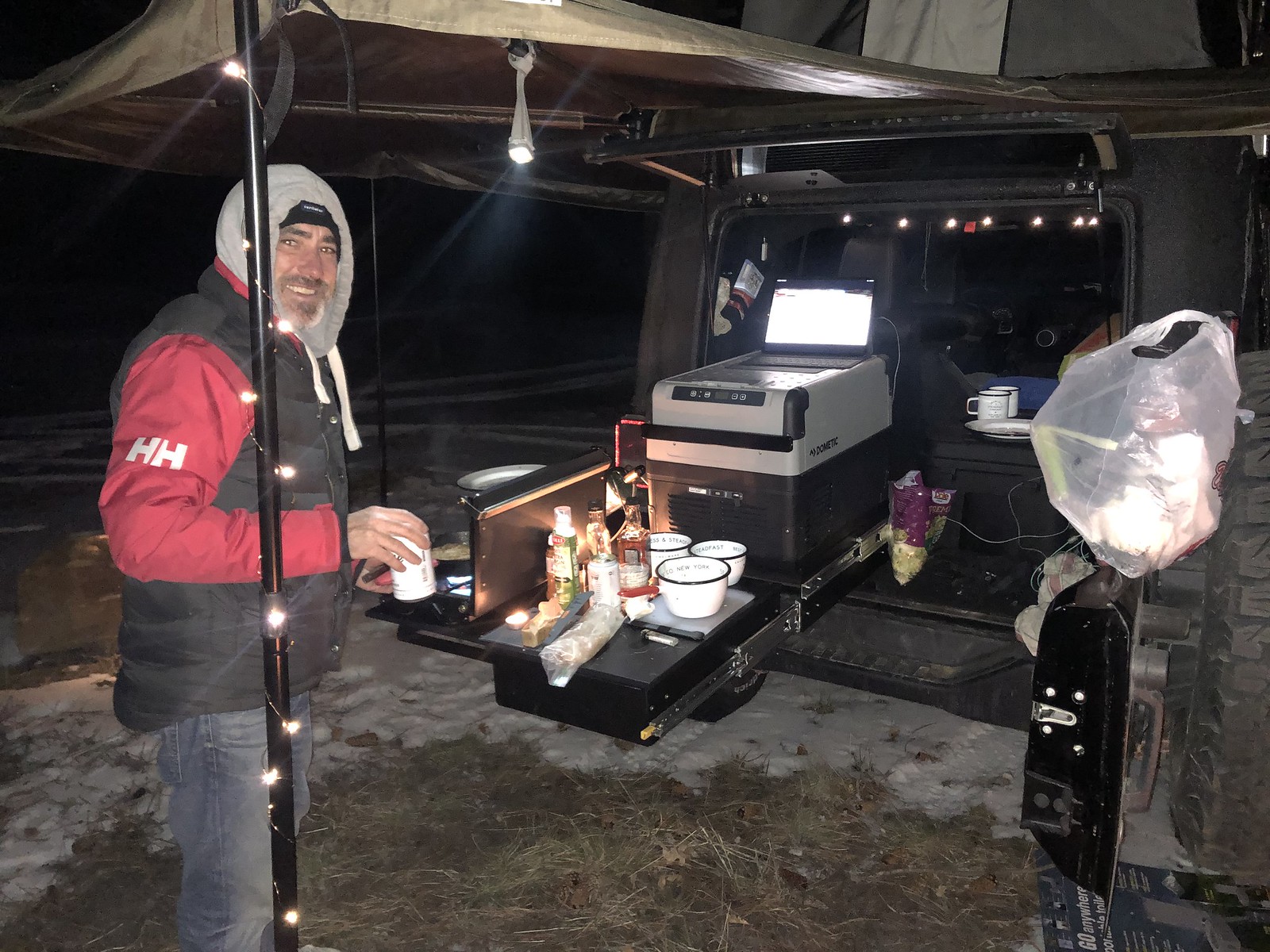 Another shot of the awning and kitchen deployed. Here, somewhere in Mojave: 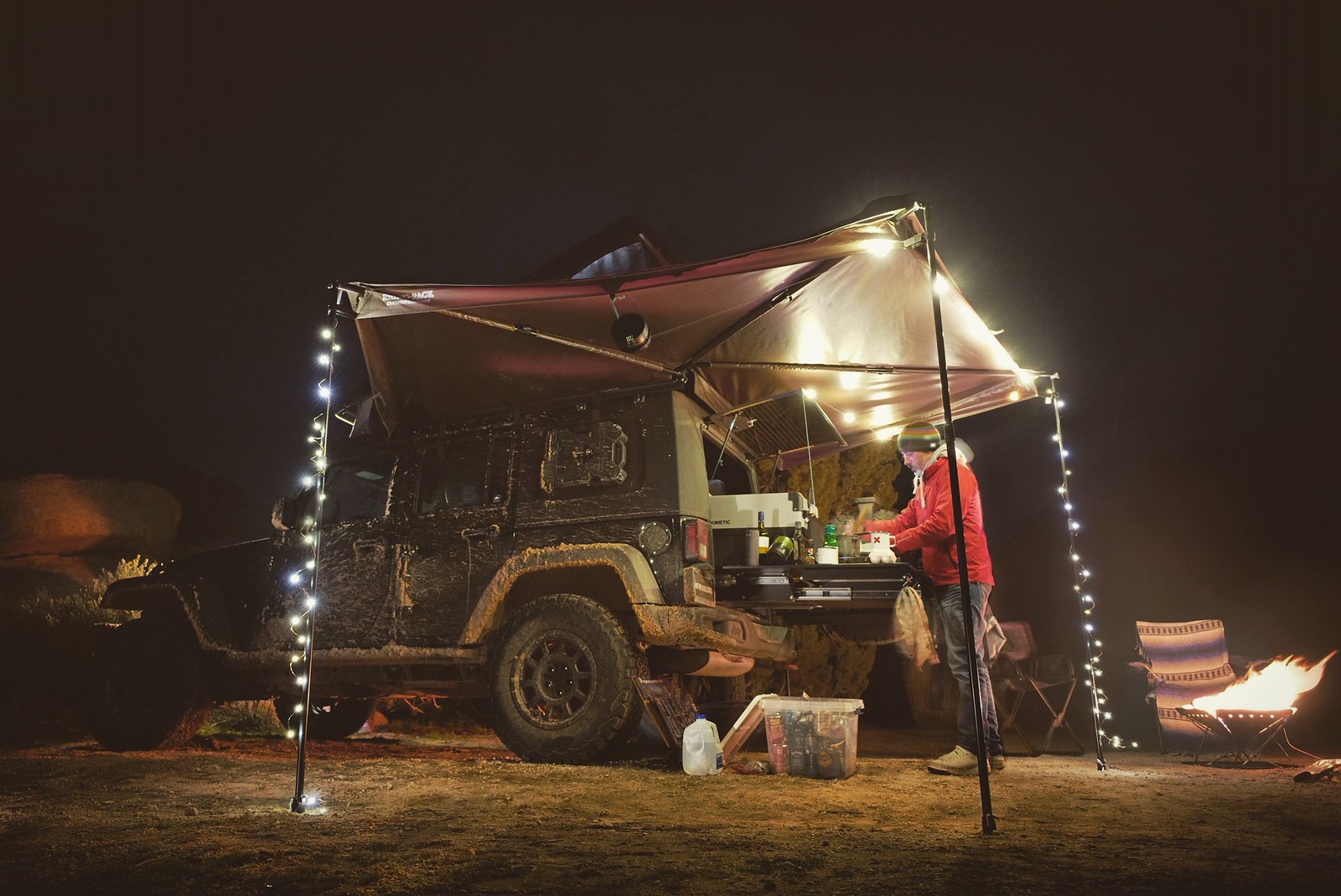 And that's where she stands today. Just ordered a set of KC LED headlights, because... well, it sure would be nice to see at night. I'd like to pretend that'll be the last thing I do for a while... but who am I kidding.

Awesome set up. Congrats and thanks for sharing.

Very cool rig you didnt mention a winch might i suggest you look at a super winch 10k or 12 k with synthetic line. The best for the moose !

Good choice on the tires and other options.