patoz said:
The few things I can tell you are:

1. Clean it up good so you can see what you've got, but be very careful when poking around seats, cracks, cabinet and compartment doors, and anyplace else where needles can fall into and hide.

2. Once you have it cleaned up, take lots and lots of pictures of every square inch of it, and from every angle. Don't forget the compartments inside also. You will thank me later.

3. Once you think you have figured out where you want everything to go, and get ready to start ripping out wiring, cabinets, and walls, STOP and think about it some more. After that, wait a while and then think about it some more. Considering you are working with a very limited amount of space, you'll find there will be several things you want in there, that will be competing for the same space. It's going to be like putting together a jigsaw puzzle, and once you remove parts and throw them away, there is no do-overs.

I'm not trying to scare you here, I'm just saying don't be in too big of a rush to do something, and then regret it later because your plans changed. Just make sure you have thought it out thoroughly, talk to other people who have already been there, wait to see if anything changes, and then start cutting and removing things if you need to. Most of the wiring circuits for ambulance items you wont need like the suction pump, can be re-assigned to another item like the water pump, etc. I would not remove any unused wiring, just cap it off and label it as to what was used for to make identification for use later easier.

Now, jump in and start planning your dream vehicle!
Click to expand...

Great advice that thankfully I learned before starting my build, working on cars for High Performance Driver Education (HPDE). Bad timing on my quote though as it looks like Pat has passed away recently. :/ In reading backwards (down to page 44 thus far), Pat was damn near a philanthropist from all the time he spent responding to questions here.

I'll post a picture of mine here and start a build thread shortly. I've lurked since November 2017, about time I started contributing.

Pat had medical issues that increasingly limited his mobility, but he still did what he could to help others. His experience as a fire chief for the DoD meant that the right way was the only way. He is missed by the many people he helped.

rlrenz said:
Pat had medical issues that increasingly limited his mobility, but he still did what he could to help others. His experience as a fire chief for the DoD meant that the right way was the only way. He is missed by the many people he helped.
Click to expand...

Condolences to all who knew and loved Pat. I never had the opportunity to meet him, but feel like I knew him. May you rest in piece, you’ll be missed Pat.

Pat and I emailed daily, with a few phone calls from time to time. He definitely was a positive influence on the building of expedition vehicles -- he was turning the module from a Wheeled Coach ambulance into a hurricane-escape trailer, complete with a custom made heavy duty trailer frame. "The right way, or no way" was his motto. He was the fire chief for Naval Air Stations in his district, and that meant that what he did had to satisfy the USN, the FAA, and probably a base commander.

Yep, Pat was good Dude. Met him roadside a few times, and we talked many times about many things.

Most of all, I knew him to be a Patriot. #Murica'


rlrenz said:
Pat had medical issues that increasingly limited his mobility, but he still did what he could to help others. His experience as a fire chief for the DoD meant that the right way was the only way. He is missed by the many people he helped.
Click to expand...

I always get lots of interest whenever I pull into a camp ground, football game, etc. I always let people tour the vehicle, everyone wants me to turn on the sirens. I only turn them on when there is no issues with the noise.

I've had issues with the electrical and batteries, so like most things nothing is perfect. I would like recommendation on how to trouble shoot the back up marine batteries.

Look forward to hearing your stories and maybe some day crossing paths on the road!!

I don't know how to rotate pictures on this forum.

The couch on the right folds down into a bed.

There is a sink and two burner stove on the left hand counter.

I have 7 gallons of fresh water and 7 gallons space for sink waste water. There is a pump sink fixture, no power required.

Happy to answer any questions.

Probably all emergency vehicles have multiple parasitic power draws, ranging from radios to cell phone chargers to rechargable portable lights. As a result, vehicle batteries can go flat within 2-3 weeks. Even though a battery disconnect switch can avoid the problem, emergency vehicles are usually plugged into a charger 24x7 -- that way, there's no risk of flat batteries. Spare vehicles often have a small (5 watt) solar cell on top of their lightbar.

Nice rig! Re: battery issues, I cleaned up aaaallllll the ground connections on mine when I replaced the alternator. There were 10+ all over the body, frame, box, engine, rear battery compartment, etc. It was cheap and just took some time and wire chasing. I’d start there to baseline the battery and charging system, there’s a lot of systems and wires that are get old and can start to leak power...
E

Hello everyone!
I joined this group a little while ago and have enjoyed reading and learning from you all, thank you to everyone! I haven’t posted my rig so I thought I’d share. I own a 2006 Ford E450 ambulance that I’m currently converting. @Vandambulance on Instagram if you would like to follow. I have put down wood floors, installed my battery bank/inverter and just recently completed the interior demo. Not much to see but here are some pictures for a visual of where I’m at. I came up with the idea of a mop pan for a shower base. I’ll let you know how it works out. Really excited to start building! 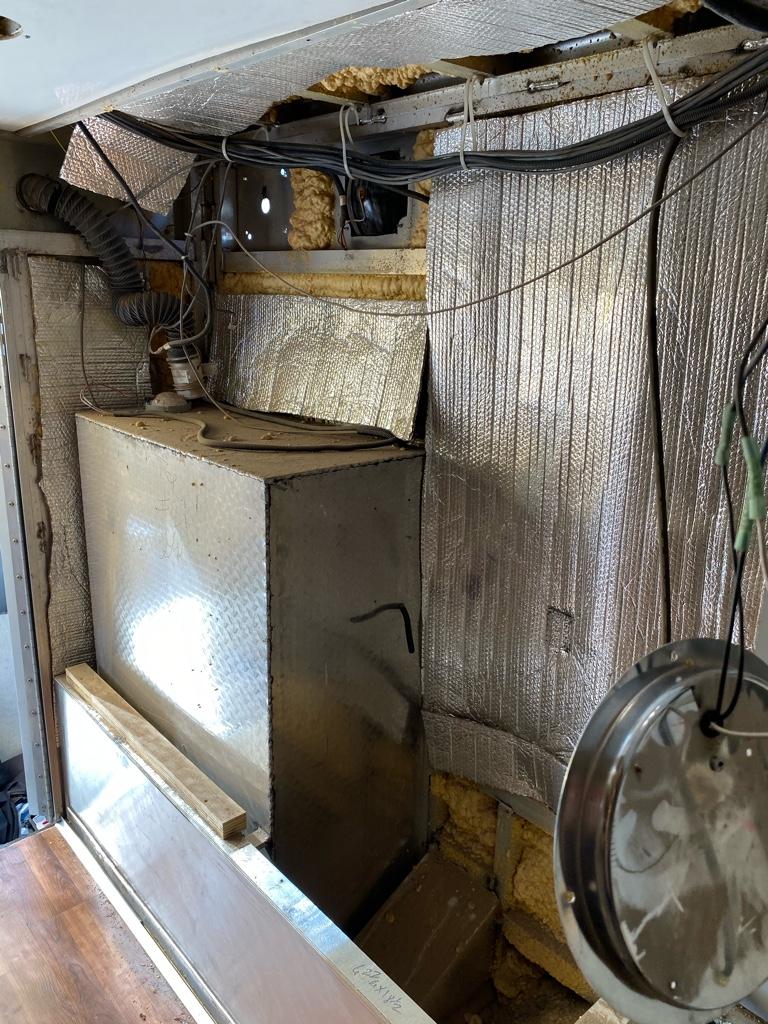 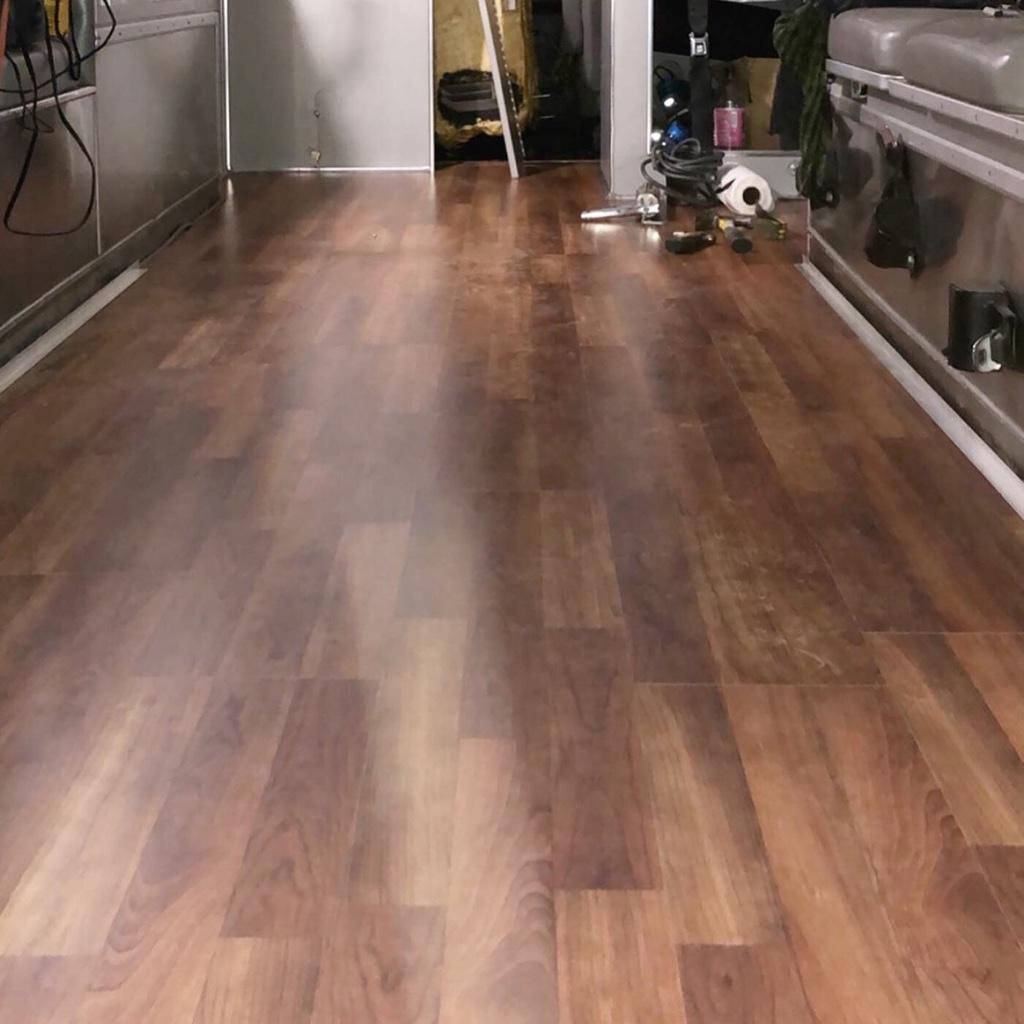 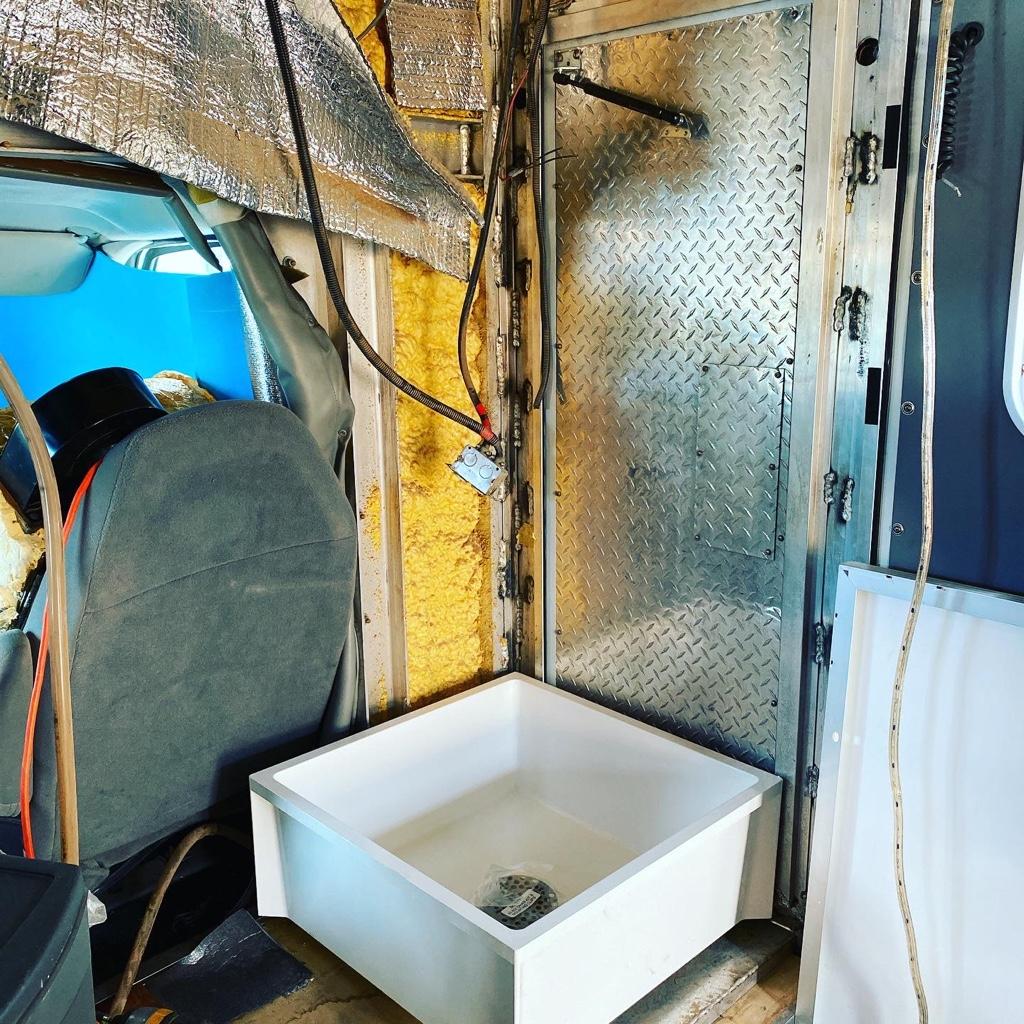 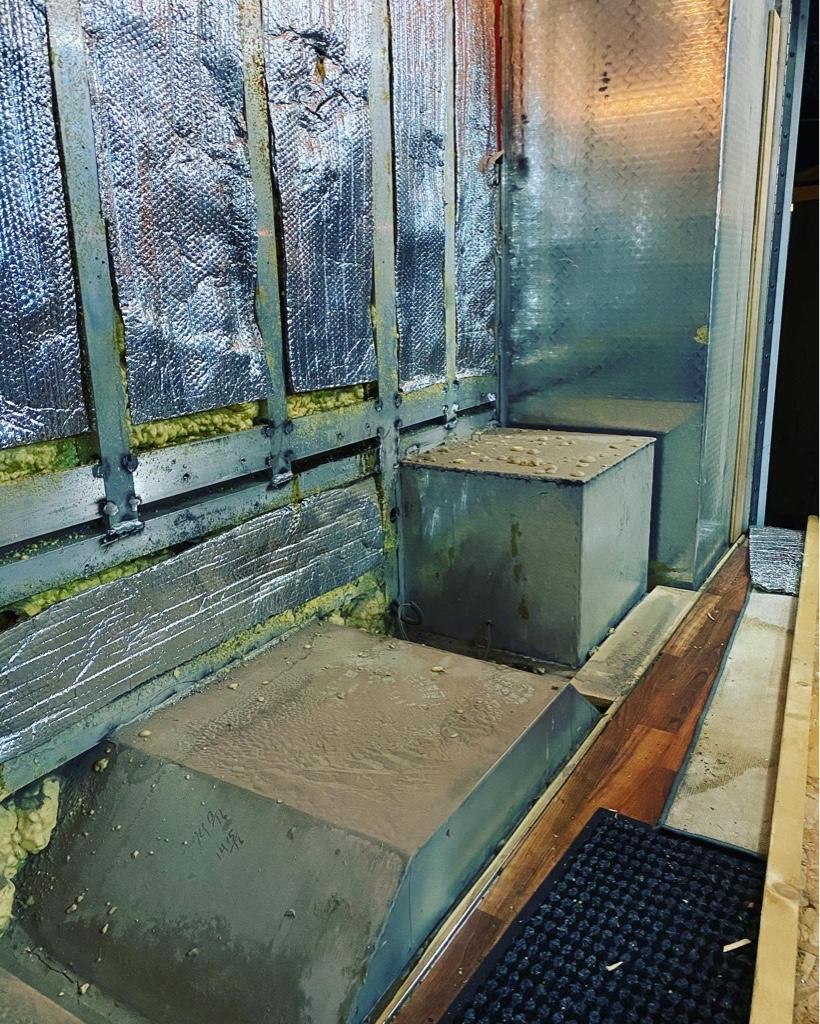 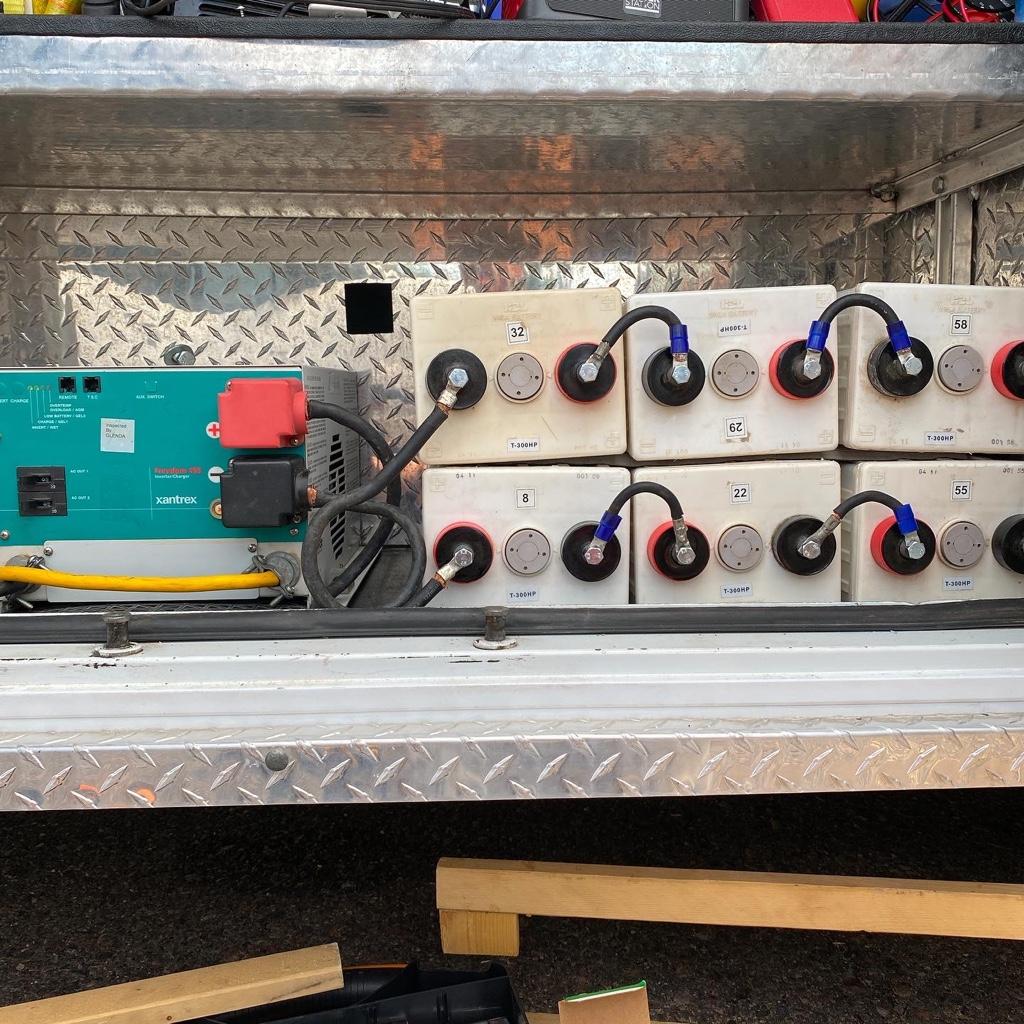 rlrenz said:
Probably all emergency vehicles have multiple parasitic power draws, ranging from radios to cell phone chargers to rechargable portable lights. As a result, vehicle batteries can go flat within 2-3 weeks. Even though a battery disconnect switch can avoid the problem, emergency vehicles are usually plugged into a charger 24x7 -- that way, there's no risk of flat batteries. Spare vehicles often have a small (5 watt) solar cell on top of their lightbar.

Thanks for the advice. I need to dig deeper.

Have you tried tracing with an ammeter?

I narrowed most of my loss down to the factory battery disconnect relay (it gets hot as f**k and draws a couple amps) and the rear heat circuit pulls an amp even when it's switched off. I have a Blue Sea Magnetic Latching switch I'll replace the factory disconnect with soon as I have some time. The heater circuit still needs some diagnosis as to how to keep it operational but not draw power.


JIMI.Love said:
Thanks for the advice. I need to dig deeper.
Click to expand...

It sounds like your battery disconnect relay may always be partly ON, possibly from a short that's feeding the relay control power line. The rear heat may be doing the same. Time to trace wiring with a volt meter or test light! Your ambulance wiring should be labeled regularly along each wire. Do a Google search for the federal ambulance standard KKK-1822 --- it will explain a lot.

Cycling the Great Divide: From Canada to Mexico on North ...
by Michael McCoy, venture Cycling Association
From $9.99From CAD$20.89

mk216v said:
Excellent write-up, I would have loved to have seen it 8mos ago before I learned so much more about ambo's than I expected to--but it was too much fun researching!
(keep in mind many of the links below may not work. I'm just copying/pasting a lot of info from the huge ambo document I compiled during my research)

Most Type3 Mini-Mod's(ie mini module) were 64/66/68" interior height until about 2010(due to the KKK ambo regulations/standards(although the coach builder could have made it on a custom order per Jason at VCI)), when most became 72". So if you're 6' like myself, the 64-68" interior height might be a bit uncomfortable.

Most 4WD Type3 ambo's were done by Quigley. I must say I love my UJOR setup instead!!

Type1 ambo's like a Ford F350/450 could come as factory 4x4 from Ford, saving you the money of a 4WD conversion. The trick with these Type1's is finding a walk-thru module, as most don't seem to be. Most Type3's are walk-thru's.

Big advantage to Type1 and 3's are the flat vertical(square) walls, vs angled-in walls of the Type2 van.

Seems that most Type1 and 3's were Ford, some Chevy. Most Type2's Ford, some newer ones Sprinter's.

Big issue with a SRW(single rear wheel) is offroad tire choices due to load rating. All depending on what size you're going to go with, you may have trouble finding a tire with a high enough load rating. This is why the Toyo M/T's are popular--because they have sufficient load rating for the heavier rigs.


Why did I go with an E350 RB vs an ambo? After much deliberation, I was a bit concerned with an 8' wide module, for tighter trails. Would I have been able to take a Type3(after a UJOR conversion) on the White Rim Trail in UT? No, I would have been too wide for some areas of the trail. Thankfully I had VANdiana to get me thru.

For open terrain where there aren't tighter trails, an ambo sure if one heck of a stout rig for the money!
I hope this info helps.
Click to expand...

Awesome man! You save my pocket! Great advice