A Hawk in the Arctic We do the same thing. Lots of people say reflectix doesn't have much r value or live up to it's claims but our furnace cycles less and the biggest thing for me is I don't feel the cold seeping through when I'm sleeping really close to it.

Welcome to the world of RV’s. BTW, what did your loaded F150 weigh?

Thank you! I was thinking of using Reflectix in this manner, possibly behind the improperly named "Arctic Pack". This confirms it for me. Thank you, again.
N

tdesanto said:
Thank you! I was thinking of using Reflectix in this manner, possibly behind the improperly named "Arctic Pack". This confirms it for me. Thank you, again.
Click to expand...

If you're saying reflectix between the softwall and Arctic pack, don't do that. It's value comes from reflecting heat not insulating and does best when there's an air gap between it and the outside surface. I just cut slits in ours to fit and it hangs loosely between us and the wall. 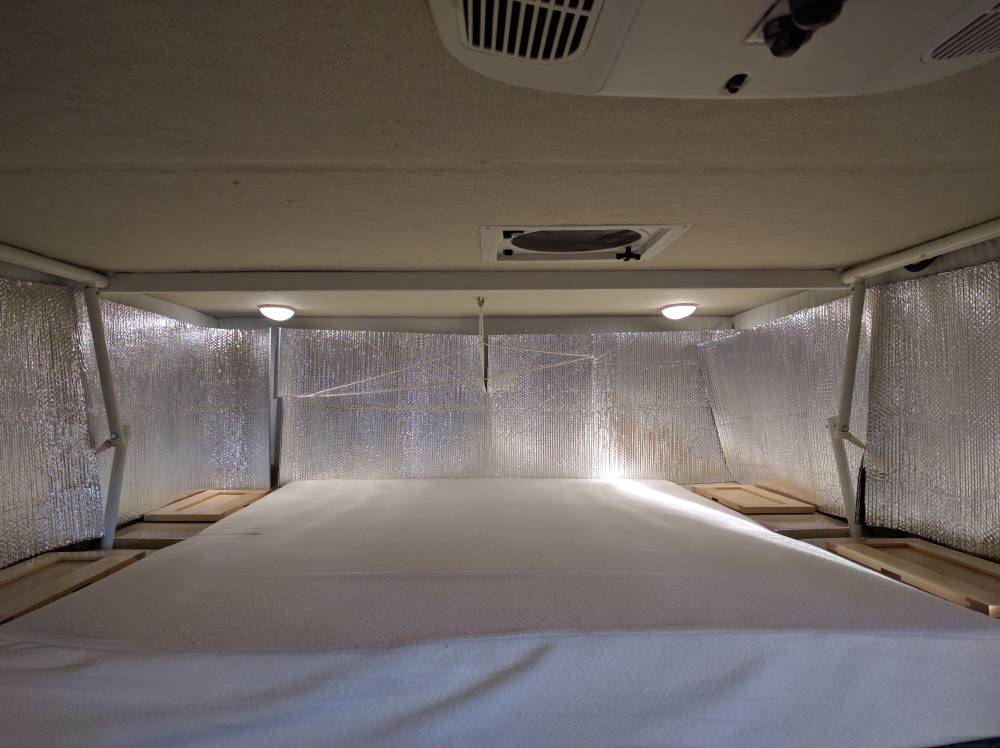 What camper is pictured/are you using that stuff in?
N

What camper is pictured/are you using that stuff in?
Click to expand...

It's an outfitter juno 10. We love it. http://expeditionportal.com/forum/showthread.php?t=155102
S

Just under 7000 lbs., all tanks full, my wife and myself and everything we and especially my wife thought we needed for 6 weeks in the Canadian arctic. Btw I have another RV with a hard sided cabin with composite panels and no condensation problems.
Stefan

Why arent american builders using the cotton based canvas which is used by european builders? I think that material breathes more than the material used in FWC an AT campers. Ten Cate is a well known manufacturer in Holland and western europe.
A few years ago we visited Canada and rented a brand new northstar hard sided camper, and we had issues with condensation as well. It really depends on the weather and the climate!

Spent four days in Crested Butte last weekend. Lowest temps were high teens to low twenties at night, low to mid forties during the day. We had one of the roof vents cracked and two windows open at the corners for cross ventilation the entire time. Still got a ton of condensation. Wiped down the outer fabric and roof each day with large microfiber towels. At home on Monday afternoon, airing out the camper and doing a final wipe-down of the outer panels, and the velcro on the "Arctic Pack" grabbed onto the microfiber towel and it tore where they obviously sewed to separate strips of velcro around the window opening. $600 well spent...it has velcro at each end with no purpose. There's no method for securing the "Arctic Pack" at each end, other than just tucking it in behind the fiberglass support panels at each end, and it seems to allow 100% of the condensation through to the outer panel. Keep in mind, this was with two people in the camper in the evenings and night...gone during the day. And, I had two DampRid dehumidifiers hanging (one on each side near the bed) the entire time (one shown in the picture).

Roger M. said:
The OP's post has opened my eyes in terms of FWC's ability to provide a comfortable camping experience in other than a warm, dry environment.
Although though having researched the crap out of the Granby, and knowing condensation was a reality, the amount of condensation highlighted in sg1's post is enough for me to give serious reconsideration to my FWC plans.

A most informative post - one that has highlighted the reality of a soft-sided AND uninsulated camper.
Click to expand...

It made my decision very easy. Add to that the lack of customization, it's a no-deal. Seems FWC is just in the business to build as many as they can without regard to quality and function.

Airflow helps for sure, but monster AC units are how commercial flights keep the air so dry.

Without the "Environmental control system" the cabin air would be THICK with moisture, very fast.
Click to expand...

That is a good read. And an interesting one. Thanks for posting it.
Looking at your user name, shall I assume you are a pilot? :sombrero:

So help me out... from where Im sitting that looks to be written in a way to alleviate moisture issues that exceed the capacity of the ECS.
Am I correct? I think it is odd that it does not reference it specifically.

Even agencies like the NCBI reference it with regards to relative humidity, and venting...

smlobx said:
As a builder of energy effecient homes I did not like the aluminum siding and frames found in FWC. This kind of construction results in extreme thermal bridging which (among other things) results in a lot of condensation when the conditions are right. Sine we live in the warm and humid south we chose Hallmark and so far have been very happy with how it performs.
They have versions for all size trucks but do weigh more than FWC's
Click to expand...

I wonder if the fiber glass option FWC offers will make any difference.
D