Go to mitsubishilinks.com and download the FSM for your year, that is the best manual to follow.

It is awesome. Sometimes it’s hard to find stuff because you can’t keyword search, but it’s all in there.
M

Go to www.mitsubishilinks.com
You will find the 98 Factory Service Manual (FSM). The Haynes manual isn't very helpful as it covers too many years.

My Montero lives on!

All I know is that in OK, 2 belts were off the pulleys and HB appeared cocked/off sideways.
Had it towed to mechanic in OK and Dustin(owner and tow driver - great guy) said that his guys thought the timing jumped and it would be very costly to repair. So I went up there to bring it home on trailer.

When I got to Dallas mechanic and popped the hood - all pulleys and belts were intact and engine would turn but not start.
My Dallas mechanic said that a little pin #18 in the pic broke/sheared and caused the timing to offset by 2 teeth, but there was not any further engine damage. He did say that the harmonic balancer appears fine - still running the same one for now. He fabricated a new more solid pin from a U-Joint he said and I'm up and running again.

Thanks guys for all the info

I've done so far -
1. replaced about 4qts tranny fluid so far(2qts at a time) - I'll do about 2-3qts more, then eventually pan fluid, filter.

4. New antenna - big pain to replace old one but done.

Today after I picked it up - had aftermarket alarm installed and front windows tinted.

Have new rotors/pads - no rush, so waiting to piece some new front end parts to do all at once Never done front end/suspension but I think i'll manage.

So much more, gotta take it slow.

There was a huge recall on the bolt that holds your HB on, you need to get the new bolt and make sure it is torqued properly or this could happen all over again.

Looking to replace HB and that bolt. Even though mechanic said HB looked fine.
R

If the crankshaft bolt came loose then you need to have a serious conversation about liability with the shop that just did your timing belt, because their tech apparently doesn't understand what a torque wrench is or how to use one.
Last edited: May 22, 2020

I'm sure a lot is lost/missing in translation.

When it happened - the PS belt and AC belts were off, the HB pulley looked cockeyed.

Being 2hrs away from home, I closed hood and called tow into Davis, OK mech shop the tow driver owned. We spoke 3 days later and his guys thought the engine might be done due to timing being off and said it could get very pricey if they continued.

They stopped at that point and I went and towed it back to Dallas on uhaul flatbed to mechanic that did TB/wp kit about 2mos earlier.

They got me up and running and best explained the aforementioned to me. I can plug and play some things mechanically but dont know the timing setup.

I'll try and get ahold of the mech in OK and ask what it is they found initially so that maybe it can help anyone who might have a similar issue.

Hopefully I can provide some better info.

Sent from my SM-G960U using Tapatalk

How many miles before a shop is still liable for torquing the crank bolt? Mine fell out after maybe 8k miles? This was back in 2014 so way in the past, now. But at the time, it was a shop in SoCal that did my timing belt/water pump before my move to TN, so I had the cross-county drive plus however many miles added living in TN. When the bolt fell out I called my old shop and they pretty much offered zip as far as help with getting it fixed. Being several states away posed a problem, I get that. But they said it had been long enough it wasn't really on them anymore (if I recall correctly)
That all being said, when mine fell out, same thing, no warning. Just a weird noise (sounded like the torque converter failing at the time), a shudder, and the dash lit up. But the balancer fell clean off and caught on the sway bar. I drove the 20ish miles home on battery power and no power steering. When I finally found a guy to fix it, he used the updated bolt, a new HB, and I've put thousands more miles on the engine since then with no issues.
*Note- I'd had one shop try to fix it and they failed. Bolt fell right back out (they refunded me). When the guy who finally fixed it went in, he pulled out 2 quarter-inch pieces of bolt, one from the original bolt and one from the shop that failed to fix it. I had also tried to fix it myself as I could thread the bolt in without taking anything apart, but not realizing there were pieces of bolt still in there, I couldn't get the new bolt to torque, which seems to be why the first shop failed, too.

I had the timing belt/water pump kit done immediately for peace of mind.

Last week we took a ride up to OK about 2hrs away and as we were leaving Turner Falls my harmonic balancer broke. I ended up getting it towed to Davis, OK to the tow's shop - awesome help and friendly. Just got word that it appears it jumped timing and there's possibly some additional internal damage.

I'm going to pick it up tomorrow w a Uhaul trailer and follow up w my mechanic here in Dallas for another look and options. Basic mechanics I'm very familiar w, but not anything internal to this extent.

Questions - Would it be worth trying to rebuild the 3.5 or better to try a 3.8 Endeavor engine swap(i believe that's one I've read about)? Keep in mind I don't know the extent of the damage and I'm still 2hrs from my rig. I just know that when i popped the hood the belts were loose and the harmonic balancer/crankshaft pulley was clearly not in-line.

Any help, advice, direction would be greatly appreciated.

Damn, I caught mine early-ish as its still on. I'm going to just replace mine and was about to post to see if anyone has the link to the DIY tool as I can't find it and need to get mine out soon.

Just for clarity's sake this is what it looks like, and sounds like (with the belts removed) if the HB is damaged and causing the 'wobble' I mentioned.


It looks like I'm going to have to take off the clutch fan, shroud and radiator to get an impact in there. If its that damaged its best to have the DIY tool, right?
Last edited: Jun 2, 2020
R

If you are trying to remove the crankshaft bolt, you can use a socket on a long-handle ratchet and rest the ratchet on the driver's side frame rail, then bump the starter (only turn the ignition key to the start position for a fraction of a second). The starter has enough torque to break it loose.

RyanY said:
If you are trying to remove the crankshaft bolt, you can use a socket on a long-handle ratchet and rest the ratchet on the driver's side frame rail, then bump the starter (only turn the ignition key to the start position for a fraction of a second). The starter has enough torque to break it loose.
Click to expand...

I've never liked that option, but you're also supposed to pull the spark source to prevent it turning on, I just simply prefer to take everything out and hit it with an impact as I should really change the coolant, too; but my real concern is the HB is going to be stuck as it looks to be the original HB, although it has the updated crank bolt installed and a semi decent looking belt on it so I could be wrong.

But the wobble looks like the one in the video and it has the loud screeching in the begging too despite how much tension I put on it. I bought a torch and PB blaster today and will be spraying everything down while I wait for the rest of the parts to come in and then hit it with the torch once its all off and just see what happens. I still have to move her in/out the garage and then up the ramps so hopefully nothing happens that makes it jump timing as that killed my first LS Gen II after trying to diagnose the fried ECU issue.

Damn it... I just wrote a more detailed post, and lost it upon login.

Ok, so to summarize: I was wondering if anyone with a properly running 2.5 SOHC 6G74 can take a picture of the 14mm tension pulley for the Alternator Belt you tighten from underneath the car. Everytime I try putting tension on it slides out of center and makes the pulley crooked and ultimately makes the belt fall off when I start the engine. And this is with the center nut on the pulley itself on with less than a thread to secure it.

Bump with some more links.

instructions for the HB tool:

Crank Pulley decided to go for a walk...

I'll have to look when I get home, I think the bolts are 3/8" x 2", I'll get the rest of the info later on. Was pretty simply to make and had zero flex when I torqued the bolt.

Useful step by step of Timing Belt removal with pics:

Mitsubishi Montero & Montero Sport - 2002 Montero Timing Belt - How difficult is it to change the timing belt on a 2002 Montero XLS?
mitsubishiforum.com

Mitsubishi Montero & Montero Sport - Crankshaft Pulley Bolt - Hi, '01 Montero Limited 3.5L. I am in the process of changing out the timing belt. Got all the diagrams and step by step procedures. But I cannot take the crankshaft pulley bolt off, before I go and put an impact wrench to it, I...
mitsubishiforum.com

I bought all the parts I need for the install and I'm just waiting now, and I'm thinking of replacing all the belts while I'm in there as I;d hate to go through this again while on a trail. But' I ended up buying the tool for the crankshaft pulley on Ebay in order to save me the trouble as many reported not having enough power to remove it even with a good impact. I'm going to have to use the old cheater pipe trick with this tool.

Here is the link, its pretty interesting design and should allow me to keep the radiator in tact: 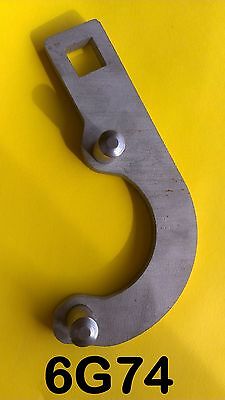 Reference MB990767. My tool is designed to fit the 6G74 engine. -MB990767". This tool is made from steel & hardened stainless steel pins, and proudly made in theUSA. Also, another version which has about a 4" spacing between the pins.
www.ebay.com