Hi friends, I’m newbie to posting! I hope this post makes sense... Any tips, tricks, and/or ideas are welcome.

Now for my PLAN...! I hope to slowly but surely convert the van into a remote expedition camper/work van. Eventually swapping the 350 gas engine out for a Cummins diesel and upgrading from two to 4WD, but that’s a long ways away. I’m the mean time I will be swapping out and upgrading parts on the van with parts that would work with a Cummins, if that’s possible. For starters I will be changing out the following things:

Radiator - there are two separate radiators in the van and the front one hade been pretty badly damaged. Additionally I have flushed the radiators a couple months ago, but it is back to its rusty orange brown color. Is there a radiator set up that would work well with the 350 gas engine and a Cummins? I should also mention I plan on towing an airstream trailer with this van!!

Secondly, I will be changing out and upgrading the shocks on Bundu. Any recommendations for reasonable good expedition shocks?

I will post more topics as I work through the list!
Thank all in advance for your time and thoughts.

Here some pics:
The radiator from above 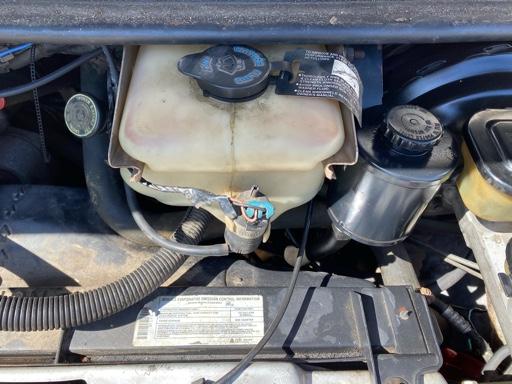 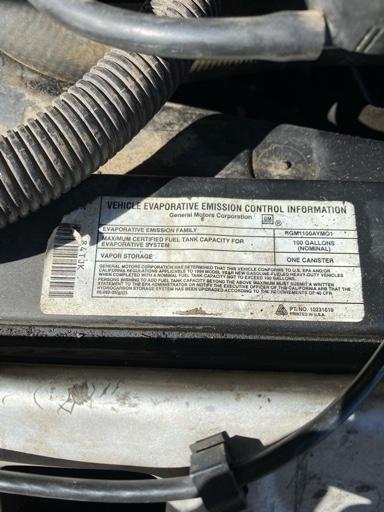 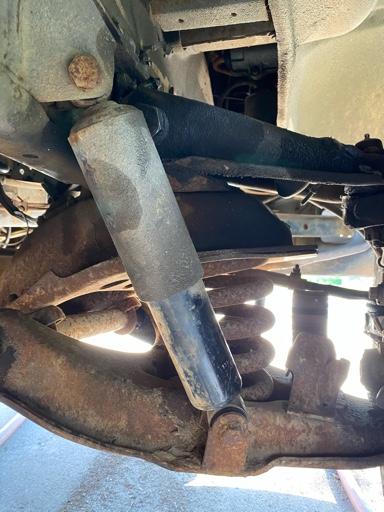 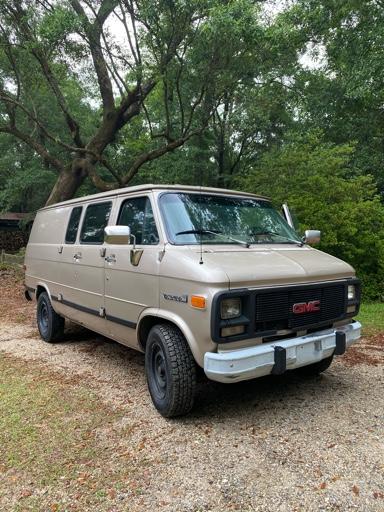 Welcome to the forum. Cool van. Let me see if I can ask/answer your questions.

As for the Cummins, are you looking to use a 4BT or a 6BT engine (i.e. 4 cyl or 6 cyl)? I have owned a Ram truck with the 12 valve 6BT engine and have owned your body style van and if you are trying to put a 6BT in, there is no way it is going to fit. Not only are they long, the are very tall and heavy. People who do the swap in '87 and earlier Chevy trucks, which have a WAY bigger engine compartment than your van, have difficulty in getting them to fit and that is even with companies that make conversion kits. No one makes that for your van. If you are trying to get a 4BT in, length will be good but you still deal with the height but might be easier to overcome since you will have a little more room to move the engine forward or back for clearance. That said, a 4BT is not a ton of power unless you put some aftermarket performance parts on it. Also 4BT are known to have a lot more vibration than the 6BT.

If you MUST have a diesel, look for a GM 6.5L turbo setup, which was available in your body style van. Though not as common in the vans, as least it would be a relatively easy swap if you can get all of the parts out of a donor van. If you have lots of money, a Duramax diesel would likely work as well but you will be making a lot of your own parts.

If you are looking for more power, for towing, your best, likely easiest and cheapest would be to swap in a LS based 6.0L gas engine (LQ4 engine). This will get you modern EFI, great power and reliability and a huge aftermarket support. It will make about the same power as a stock 12v 6BT. If you really want to move up in the gas world, you could look at the late model 8.1L (Vortec series) big block, which would add some torque for towing. Another common and very easy swap would be getting a Gen 1 SBC (like what you have now) but get a 383 stroker. Those can be built for high torque and would be a drop in replacement for your current SBC.

As for the coolant color, did you completely flush the block and use a flush kit to remove the rust from the inside of the block? If not, you will never get rid of that problem. Until you can get the rust out of the block (which being made of iron, will rust), it will continue to do this. Flushing the radiator does not do it.

As for shocks, I am not sure if they make them for your van but Bilstein shocks would be my first choice (well for me, only choices as I have run them in dozens of vehicles).

Good luck on your project.
J

Vagabonding: An Uncommon Guide to the Art of Long-Term Wo...
by Rolf Potts
From $5.07

Long Way Down: An Epic Journey by Motorcycle from Scotlan...
by Ewan McGregor, Charley Boorman
From $26.5

Thanks for All that information @ExpoMike

My theory for swapping out the engine on the van is based on the idea of increasing its towing capacity. Right now with the engine it has, its spec is 8,600. I would like to get this number up to about 10,000, if possible, But also not loose too much on the MPG.

We have a Sovereign 31’ Airstream trailer which we are renovating. I would like to be able to tow it easily once I have done the mods to the van. I’m expecting the trailer to weight to be about 7/8k pounds.

With the radiator, I traced the lines and it’s the AC cooler. Leaving it as is for now, but I did end up replacing the radiator and the hoses. Before doing so I also back flushed the system till there was clean water coming out. Should I still treat the system to prevent it getting worse again? Any product suggestions?

Here’s a couple pictures of what I found..! 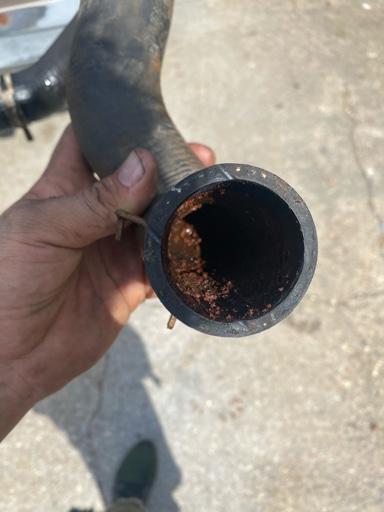 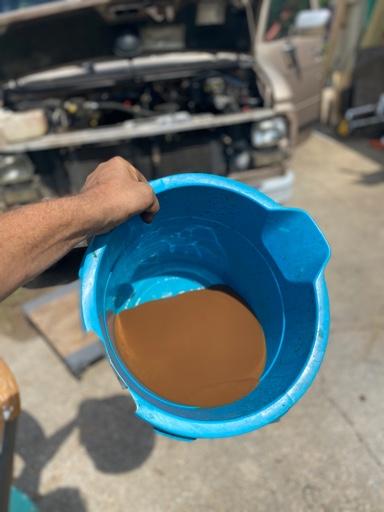 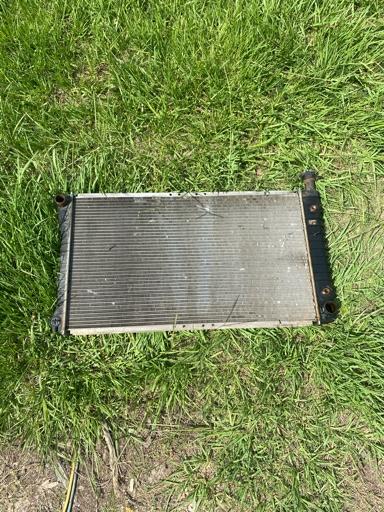 This is a fairly good video on how you can flush your system.
The only thing I would add to this process is, with the t-stat out and you have "drained" all the coolant/water, I would use an air compressor at 15 psi, take a rag and plug the t-stat hole and blow out the rest of the block. On my M1010 project, when I was doing the cooling system refresh, it was amazing how much extra coolant I got out by pressurizing the engine block.

As for engine swap, there is more than just the engine that goes into the max towing capacity. The ratings will come from the combination of engine, trans, rear end ratio, tires, braking system and suspension system. Just an engine swap does not automatically mean you have the correct setup for the additional towing capacity. Also keep in mind, if the vehicle has a rated limit and you tow over that limit, if you have an accident, even if not your fault, you could be held liable and/or denied your insurance claim. Factory rated limits are exactly that, rated limits and this is what police, CHP, insurance companies and lawyers look at. If you need more than the limit, you need a different vehicle rated for such. My '97 Ram with FWC popup camper had a GVW of 8800 lbs. I was careful in my selection of items carried and I had a loaded weight of 8600 lbs., just under the limit. Remember, just because you can do something, doesn't mean you should do something. If your trailer is 8K or less, then you are in legal limits. If it was my vehicle and I needed extra towing power, it would swap in a 383 that was built for torque (i.e. the right cam selection) and never look back. It would drop in easy, give you about an extra 100+ ft. lbs. torque rating and not add any extra weight and all of your current engine accessories would bolt right on.

Thank you @ExpoMike for your insight and I apologize for my late response. It’s been a crazy busy couple weeks for me packing up our house and home, and trying to make the move to North Carolina. Unfortunately the van as is just doesn’t have the power need to tow the trailer up any kind of incline. Something I am VERY sad about. And we don’t have the time of money to spend on the van to get it there.

I am forced to face the reality, that we are going to need to find a vehicle that can tow 7000/8000 lbs up a mountain with out much fuss.

You seem to have extensive experience with Ram trucks, what model, year, and engine would you say would be a good match for the job?

Sorry that your van is not going to work well for you, but it's great that you realized and accepted this early. I always have to put a lot of work and dollars into things first.

Capt'n Brat said:
Thank you @ExpoMike for your insight and I apologize for my late response. It’s been a crazy busy couple weeks for me packing up our house and home, and trying to make the move to North Carolina. Unfortunately the van as is just doesn’t have the power need to tow the trailer up any kind of incline. Something I am VERY sad about. And we don’t have the time of money to spend on the van to get it there.

I am forced to face the reality, that we are going to need to find a vehicle that can tow 7000/8000 lbs up a mountain with out much fuss.

You seem to have extensive experience with Ram trucks, what model, year, and engine would you say would be a good match for the job?

Happy to help. Yeah, I have been forced to back out of a project before I really got into it, once I realized it wasn't really going to suit the needed requirement and would require way more time and money to get it there, than other options.

As for Ram trucks, any of the Cummins diesel powered trucks will work fine. I prefer the 12v models ('95-'97 my preferred). The '98 and later 24v are great as long as you upgrade the fuel delivery system. They have issues with injector pumps if the inlet fuel pressure is low. The factory pump system is okay when new but starts having issues as mileage goes up. Most people will upgrade to an "airdog" system or something similar. The biggest issues with most all automatic Ram trucks is the trans. They are the weak point. They can be beefed up but that is added expense and time. Since diesels in general are going to command a premium in price, you might need to consider moving away from diesel trucks. I was looking around at '96/'97 Ram with Cummins and they are hitting the $10-$15K range and typically have 250K+ miles.

For your needs, you might want to look at Chevy/GMC trucks that have a 8.1L big block engine. This is gas engine so you are not going to get the mileage of a diesel but the purchasing cost and maintenance cost will likely be so much lower, that it would take years to offset the cost difference in fuel. Sorry I have no opinion of Ford products as I am not a Ford person. I know the Powerstroke 6.0 has some issues so I would avoid those. I think other offerings are good but cannot comment on the trucks themselves.