2011 Trans-Africa trips by Toyota and LR

I have been keeping track of vehicle based Africa Overland travels via The Africa Overland Network since the website started in 2000. There were only 42 Toyota's and Land Rover's used for full Trans-Africa trips in 2011 of which 60% opted for Toyota.

See the blog post Africa Overland Vehicle Choice for the full statistics and my thoughts on why 2011 changed overland history.

Thoughts and comments welcome...
B

That's quite a bit of data mining there. Thank you for sharing.

Interesting statistics and interesting site. Thank you for the information and link.

I wonder how comprehensive the Africa Overland Network's data is (I've been following it off and on). I'd think there are a lot of trans-Africa trips that proceed without that connection?

Motorcycle Messengers: Tales from the Road by Writers who...
by Lois Pryce, Mark Richardson, Carla King, Sam Manic...
From $9.99From CAD$9.99
Z

I agree that there are many trips that don't publish an online blog, website etc so as a result have no presence on the web. Those trips are very difficult to track and its only word of mouth from online overlanders that make comment to those travelers.

I like to believe that the Africa Overland Network has the most comprehensive data available as there are no other sites that have captured that much data over the last 11 years of Africa overland and website journaling. There are another 300 websites that have faded into the webs memory due to lapsed domain names etc that I have not counted.
There are a few other overland related websites that have logged motorcycle trip reports but nothing aimed at vehicles with this much history.

What the stats do tell us is that more overlanders are publishing trip reports / blogs / photos etc to the internet than ever before. You no longer need to be an internet programmer to get your website published - this is clearly shown in the number of trips publishing a website from 2004 onwards.

I was surprised that the average number of travel days is still over 300 days. I have been noticing more trips (admittedly motorcycle trips) that are very short in duration.

Let me know if you need any more stats... I have quite a few from the last 11 years!

I agree that the AON has done an awesome and useful job of data collection.

I'm also surprised at the length of the average trans-continental trip. I think there's an assumption among many would-be Africa travelers that you have to take that long to accomplish a traverse, which is far from true. On the other hand, I loathe the types of travelers who appear to be interested in little but racking up a list of countries and continents visited. They remind me of the birders who care about nothing but the next species on the life list.

I recently ran into an English mother and daughter who were taking two months to travel around Tanzania using nothing but local busses and taxis. Now that's a journey. I was as much in awe of them as I am of someone who drives a Land Rover from Cairo to Cape town.

zeroland said:
2011 was an interesting year for Trans-Africa trips... it was the first year that Toyota outnumbered Land Rover's as the vehicle choice for Trans-Africa adventures... ...
Click to expand...

While I have no way to count the number of trans-Africa trips, I would simply see this being a case of overlanders catching up to what has long been the reality on the ground. When I first arrived in Africa (Cameroon) in 1972, a colleague who had just arrived from East Africa told me that Toyota had totally displaced Land Rover as the vehicle of choice in East Africa. And within a year or two, I saw the first Land Cruisers arriving in West Africa. Today, Toyota totally dominates all parts of the continent. While Toyotas are good vehicles, this has as much to do with good marketing as it has to do with the absolute quality of the vehicle. But the fact remains, in places like Chad or Somalia, you can't give away a Land Rover; gotta be a Toyota.

I firmly believe that unless you are very comfortable maintaing your own vehicle and carrying your own spares, a diesel Toyota is by far the best choice for a trans-Africa trip.
Last edited: Jan 9, 2012

I have driven old and new trucks (and a few vans) all over east africa. In the last few years I have logged over 3,000 miles in Kenya and Tanzania. It's been my experiance in east Africa that it is easier to find someone to work on a Toyota than anything else. Just about every town has a mechanic that can tear apart a Toyota with only a screwdriver and spairs (old and new) are everywhere. Most towns in western Kenya have Toyota dealerships. I only remember seeing a land rover dealership in Nairobi.

The NGO I work with is in the process of buying another 4x4 in Kenya and we ruled out the landrovers for the reasons listed above.
Z

Here's an interesting comment I received which I thought was worth posting:

This is fascinating information. We have spent the past year on Tunisia -> Cape Town, and would add a few observations and anecdotal data points:

1) Virtually every group (around 30 groups) doing a similar journey was aware of the Africa Overland Network, and about 1/3 of them had posted their site info on it.

2) Analysing just the English language based web sites are likely to be somewhat favorably biased towards LR as more British travelers are in LRs. We met only two non-British groups in an LR out of around a dozen.

3) Some overland prep outfits in the UK are nudging their clients more towards one manufacturer as they try to build standardised set-ups to reduce costs. LC tends to win out here as perceived/actual reliability is seen as important by non- car enthusiast clients who tend to go more to overland outfits in the first place. We experienced this first hand when we went around England choosing a workshop for some of the major work.

The number of trips data you have for 2011 may well be affected quite a bit by the Arab Spring - Libya and Syria still problematic. We know of several couples who have postponed their trips.
Click to expand...

preacherman said:
The NGO I work with is in the process of buying another 4x4 in Kenya and we ruled out the landrovers for the reasons listed above.
Click to expand...

This matches my experience over the last almost 40 years in Africa. There is a lot of Land Rover nostalgia, especially among Europeans, but for most people, that will not match the availability of parts and service (even the pliers and baling wire type) on the ground.
Z

It's been a year since I reviewed the last data from The Africa Overland Network websites...
A few interesting comments on 2012:
The number of Trans-Africa trips declined again... could be the GFC or it could be less people publishing websites and rather using social media.

Whilst Toyota was the vehicle of choice for 2011, it seemed that Land Rover's have won again in 2012:

That's the highlight for 2012... if interested, you can read more via Overland Live Blog

ps - same comment as above. Stats taken from The Africa Overland Network and are generally English-speaking travelers. It's the best data available but still only reflects overlanders who take time to create a website.

Thank you again, for doing the statistics!

We just had watched travellers who are on the west-route.

I dont know why the people do not list their blogs on overland network, but we meet and found more Travellers with Blogs outside of overland-network, than inside.

We meet some of them during our trip, found them within google or we collected them from the guestbooks of the Hippocamp (Congo) / Sleeping (Mali) Camel.

Looks like we have to do some advertisement for the overland network, it is the best collection who is available!
Z

A fresh count for Trans-Africa travel in 2013 saw Land Rover losing its preferred vehicle choice to Toyota.
Only the 2nd year (in over a decade of tracking) that overlanders have preferred to use Toyota.

I fully acknowledge that the stats might are biased towards English overland websites focussed on Trans-Africa trips and do not cover majority of other EU countries. However, in saying that, The Africa Overland Network does have the most trips listed which allow for good statistics.

Additional stats are available on the blog, including average travel time for 2013 and alternative vehicle choice. You can read more via the Overland Live Blog 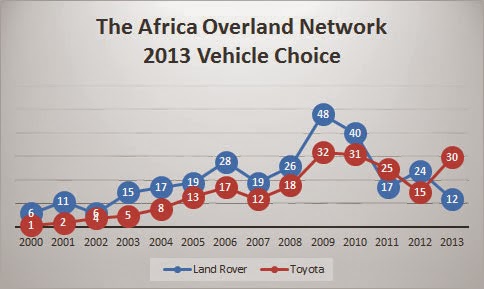