2006 LR3 HSE 4.4 (103k miles)
I recently had a drop in the coolant and took the truck in to get looked over as I noticed no puddles, smoke, overheating, or anything else that could help me figure out where the leak might be coming from. Truck has had a new water pump and thermostat installed over the last 3 years so I wasn't too concerned about those items. After some looking the shop pulled the intake and noted a head gasket leak into the engine valley. No evidence of coolant leaking into the cylinders or exhaust (so far) and they're trying to come up with some cost estimates for a head gasket repair or swapping in a new engine.

Just curious if anyone else has any experience with a head gasket replacement or swapping a new (used) engine into the LR3? Anything you wish you had done differently? Options for finding a decent lowish mileage used engine? I was planning on keeping the truck for as long as possible before this came up and have been replacing parts and maintaining the truck as such.

Just looking for some experiences or advice. Thanks in advance

Sourcing a new engine when you only need to replace the head gaskets is like buying four new tires to fix a slow leak in one of them.

I bought an 07 LR3 that the PO did not tell me about when he had let the engine overheat when the water pump failed. He replaced the water pump and associated piping but because the engine overheated the head gasket also failed and warped the heads. I noticed a dip in the heat coming from the heat vents and a rise in engine temp. Had the vehicle towed to the dealer, ( I was new to LRs and did not know of a shop nearby). The ensuing bill for the repair was $7200, almost as much as I paid for the LR.
This was not something (the fail) that could be detected by inspection of the vehicle before purchase. An honest PO would have been nice. Not so lucky.
Find out where the vehicle may have been serviced if you can and check the history. A new engine might have been an option but I was unaware of all my options at the time. It has been working well since the repair but as it is a previously owned vehicle anything can happen. I have spend twice what I paid for it in repairs not including the milling of the heads to true them up but I still like the vehicle and am now committed to it and will never get out of it what is into it. Had I not spent the money to repair it I would have a $10K paper weight in my drive. I would have replaced the disaster engine with a diesel engine, who knows what that would have cost me down the line. I had my heart set on an LR but maybe a Toyota would have been a wiser choice.
Happy motoring.
G

These engines aren’t known for head gasket issues. A quality repair shouldn’t have any future problems IF the engine wasn’t overheated that caused other (possibly invisible) damage. Used engines are available on eBay in the $1,500 range but most are going to be higher mileage than what you have.

What was the level the coolant was at?

gabrielef said:
What was the level the coolant was at?

The coolant was still within range and above the cold fill line. I know the temperature gauge doesn't mean much but it never ticked higher than the middle "normal" section.
D

nwoods said:
Sourcing a new engine when you only need to replace the head gaskets is like buying four new tires to fix a slow leak in one of them.
Click to expand...

I would agree, but I was concerned it might be cheaper overall. I have been struggling to find recent cost estimates on a head gasket repair as they just aren't that common with this engine. I spent almost 18 months looking for a low mileage LR3 and when I bought this one two years I was happy to have a sub 100k truck. Knowing that these engine usually last quite some time (with appropriate maintenance) I don't think it would be a big issue to swap in something with 120k, 130k on them but would still prefer to just keep mine. So long as there wasn't any damage to the engine overall from this.

denver6161 said:
The coolant was still within range and above the cold fill line. I know the temperature gauge doesn't mean much but it never ticked higher than the middle "normal" section.
Click to expand...

Not sure I understand the issue stated at the beginning of your OP. You mention a “drop in the coolant”, does that mean fluid loss or temp indication drop?

gabrielef said:
Not sure I understand the issue stated at the beginning of your OP. You mention a “drop in the coolant”, does that mean fluid loss or temp indication drop?

Sorry. Fluid drop, but still above the cool fill line. I knew I may have a slight leak but was struggling to find where it was coming from. Never had any indication of overheating with the truck. But I'm not the original owner so who knows what happened before I bought it.

denver6161 said:
Sorry. Fluid drop, but still above the cool fill line. I knew I may have a slight leak but was struggling to find where it was coming from. Never had any indication of overheating with the truck. But I'm not the original owner so who knows what happened before I bought it.
Click to expand...

At three years old, your thermostat housing is already suspect. They don’t last very long sometimes. Even the water pump, depending on the brand. My wife recently had a LOW COOLANT MESSAGE pop up and there’s no indication of a leak anywhere on the ground, or where it might be going. Turns out, it’s so small, that it’s evaporating as it seeps out. So you could be experiencing something similar. Evidence would be on the front of the engine, directly below the water pump and thermostat housing.

UV coolant dye and a pressure test - start simple. I had a coolant leak in my D2 that was the only way I found it. You could skip the pressure test and just drive and check every night. That stuff glows bright bright green under UV light. 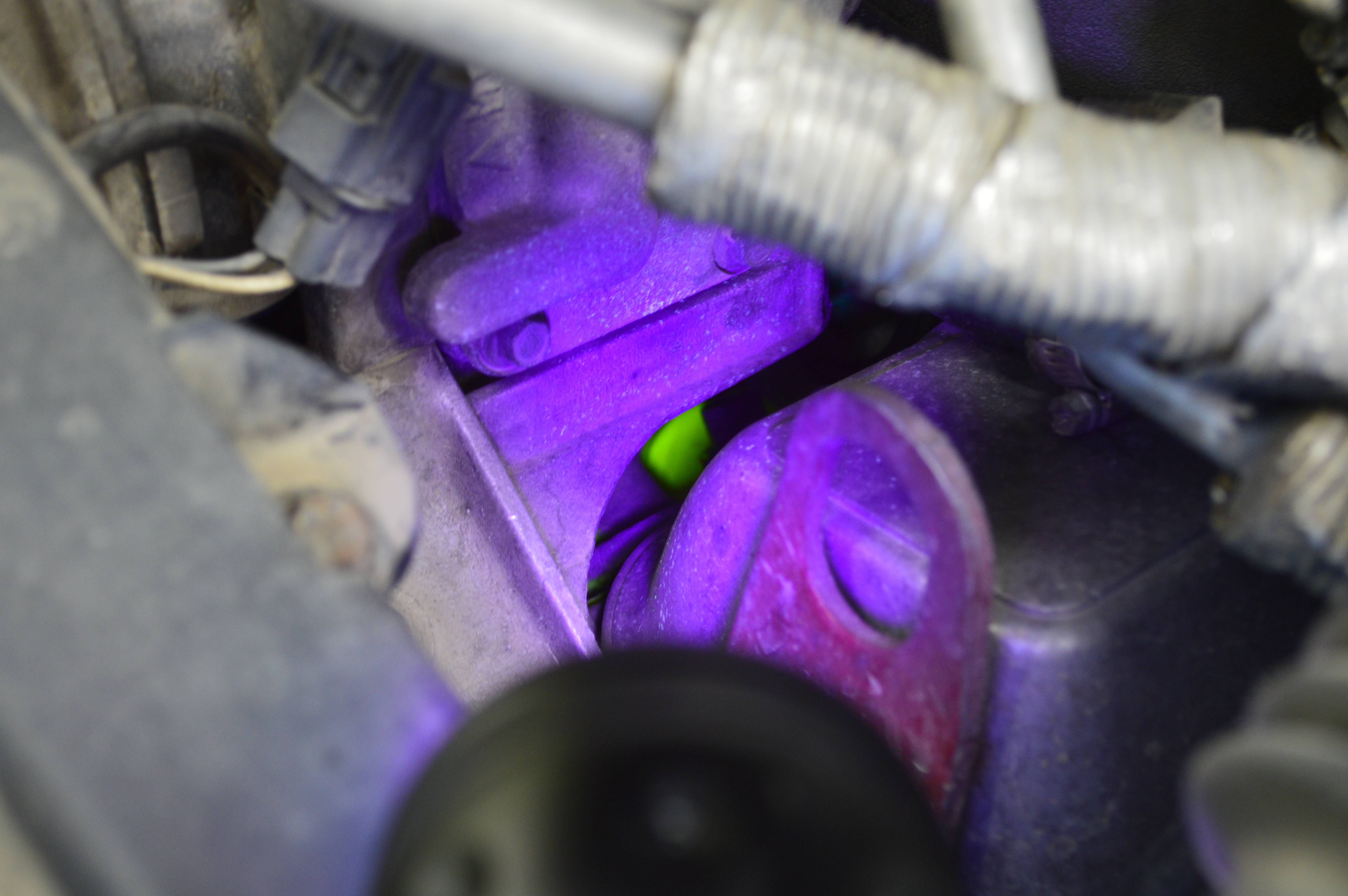 I am in the process of having the engine replaced on my LR3. It will hopefully be completed this week.

Four years ago I replaced the radiator and did not properly bleed the cooling system. I ended up overheating the engine to the extent that smoke came out of the exhaust. After changing the thermostat housing and properly bleeding the cooling system, I was able to drive the car for a few years with no issues. Somewhere during that time I began to notice a strong gas smell whenever I opened the coolant expansion tank. Then the occasional hose would burst, which I thought was due to age. Then I began to notice that the cooling system was getting overpressurized. It finally dawned on me that I had a head gasket leak that originated on the day I overheated the engine. The leak probably started out very small and grew in size over the years.

I called three Land Rover shops and one Jaguar shop to get estimates. Three of them wanted to outright replace the engine, the argument being that trying to repair it could introduce more problems, specifically in other yet unknown weak spots. The quote for engine replacement was $6000 while the quote for head gasket repair was $3900.

I decided to go ahead with the engine swap because I knew that the shop I chose had done it before along with engine swaps on LR4s due to their overheating issues. The engine that is going in has 89,000 miles on it. The shop sourced it and was in the process of doing a full rebuild on it when I dropped off my car. I did consider just buying another LR3, but after giving it a lot of thought, I felt that it would be introducing new unknowns into my already complicated season of life; I've done the majority of the wrenching on my LR3, and I feel like I've patched up all it's trouble areas or am aware of what to keep an eye on.

There was a mild moment of regret when I cleaning out my car before having it towed to the repair shop. I was looking over the car and thinking, "I'm about to invest $6,000 into this beat up thing. Does that really make sense?" In the end, I feel at peace about my decision. I got close to 200,000 miles out of my original engine, and I'm pretty confident I'll get more miles out of the replacement engine.

The shop that is doing the repairs seems to be a reputable for sourcing Land Rover engines. I was looking at their reviews and it seemed like some people in other cities were using this shop to buy rebuilt engines and having them shipped to their mechanic back home.
D

I appreciate all the responses. Got the truck into an indy LR shop. They pulled off the intake and the coolant leak is coming from the front driver side corner of the head gasket. Got two quotes, one for the head gasket repair and one for a used engine swap. Both seem exceedingly high ($9k for the HG and $7.5k for the engine swap). I love the truck and had plans for it to be in the family for at least the next 10 years. Potential engines can be found for under 100,000 miles which is great but I'm concerned about any course of action. I can't replace the truck with a reliable alternative for under $15k and I've already taken care of a number of maintenance items that needed to be fixed (Lower control arms, transmission service, fluid replacement all around). A used engine always felt like you're putting a big unknown into the vehicle and the potential price of a head gasket repair seems very high (not to mention the question of any other damage to the engine if it did overheat).

I appreciate the comments on the engine swap. Don't know if I want to take this to a non-LR specific shop for a head gasket repair (or any other major engine work).
N

You should look over your quote, but I suspect the $9k isn’t just a single head milling and gasket. It should include milling both heads, two new head gaskets, new cooling system parts (hoses, thermostat, pump), and new timing chains/guides/tensioners. It’s possible to do this body on, but it might also include labor for body off. They might not even be milling the heads but just replacing them with new or rebuilt.

If you trust your shop you might talk to them about whether they advise even fixing it at this stage. Like someone suggested earlier, if it’s a small leak and it’s not going into the engine, you could monitor it and drive it for a while.